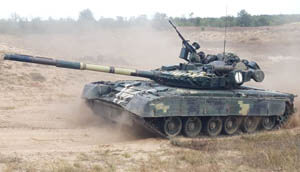 The story of T80 MBT began over 50 years ago with the launch of project to build the first Soviet turbine powered tank. Its designer was A. Ch. Starostienko and he worked at the Leningrad Kirov Plant (LKZ).

In 1966, the LKZ built the experimental Object 288 “rocket tank,” powered by two aerial GTD-350 turbine engines with a combined power of 691 hp (515 kW). These turbines required a complete overall of the drivetrain and track system to absorb the performances. The Ob’yekt 219 SP2 received in that occurrence larger drive sprockets, return rollers and six roadwheels (instead of 5). The turret was modified in order to use the standard 125 mm 2A46 tank gun fitted with an autoloader and T-64A ammunition carousel.

The T-80 entered service in the early 1980, gradually. During the broke up of the USSR were registered 4,839 T80 in service. Their speed led NATO to the develop  new ATGMs and attack helicopters.

Currently, the T-80 maintains an active position in the Russian Army:  1,400 units are available despite the presence of so many losses during the Ukrainian War (many T80 remaining in key reserve storage facilities – perhaps as many as 3,000 of them). The T80 was an example for the Russian Army: the T-90, the successor of T80 and the first Russian Army Main Battle Tank, incorporates key qualities of the successful T-72 system.

A lot of T-80 chassis has been used to fulfill various other battlefield roles including engineering, recovery and mine clearance vehicles.

Even though the T80 is still in active service today (in Ukrainian war, on both sides of the aisle), its days as a frontline battlefield solution are coming to an end as its available numbers are continually reduced year after year. In addition to this, the use of the T80 in battle has fallen short of expectations: during the First Chechen War (1994-1996) and Ukraine invasion proved highly susceptible to anti-tank rocket-propelled grenades and Javelin.

Until 2 november 2022, the open-source intelligence site Oryx has visually confirmed the loss in Ukraine of 315 Russian T-80 and almost 150 Russian T-80BV, T-80BVM, T-80UK, T-80UE1 and T-80U tanks have been confirmed captured by the Ukrainian Army. Some of them have been put in the 93rd Mechanized Brigade. 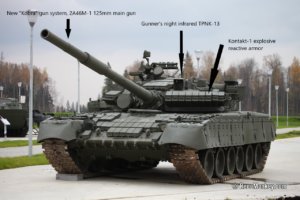 The T-80B fitted with Kontakt-1 explosive reactive armor for a higher level of protection. T-80B’s would receive a new 30mm steel plate to increase it’s protection to BV standard.
The main armament of the T-80BV consists of one 125mm 2A46 smoothbore gun which can fire a full range of ammunition including APFSDS (Armour-Piercing Fin-Stabilized Discarding-Sabot), HEAT (High-Explosive Anti-Tank), HE-Frag (High Explosive Fragmentation) and training.
The T-80BV MBT is motorized with a GTD-1000TF gas turbine engine developing 1,000 hp., which is essentially a three-shaft unit fitted with two independent turbo-compressors and a free turbine.
Standard equipment of the T-80BV MBT includes NBC (nuclear, biological, chemical) protection system, night vision, and fording kit. The driver is equipped with modern TVN-5/TVN-5M binocular night vision goggles.

The T-80BV is an upgrade version of the T-80B Main Battle Tank. 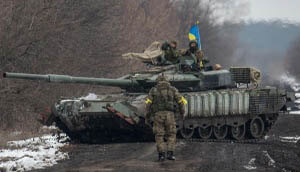 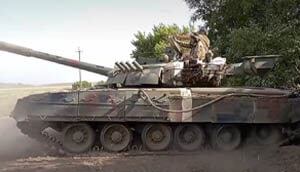 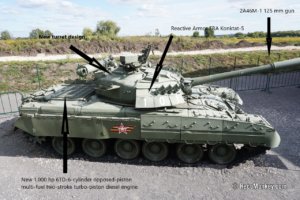 The T-80UD has a new welded turret and is armed with a fully-stabilized 125 mm smoothbore gun, fitted with a carousel-type autoloader. This tank is powered by the 6TD diesel engine, developing 1 000 hp. Diesel engine of the T-80UD is 8-10 times cheaper to produce and consumes 20-40% less fuel comparing with the gas turbine of the T-80U.
It is endowed with:
– a set of sensors for firing conditions, consisting of sensors: transverse wind, roll, tank speed, heading angle (cosine potentiometer);
– a gunner’s night sight TPN-4E with dependent stabilization of the field of view in two planes;

The T-80UD has a new reactive armor ERA Konktat-5.

In parallel with the T-80U and Russia in general, Ukraine developed a diesel-powered version: the T-80UD. 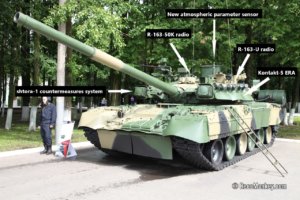 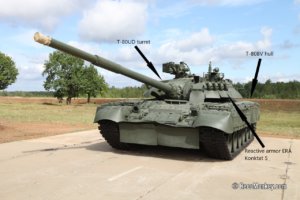 The T-80UE-1 version is made by mating T-80UD turret with T-80BV hull (with some improvements to bring the hull to T-80U level, as Kontakt-5 ERA for example). 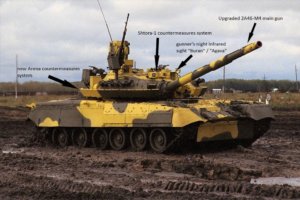 A variant of T-80U with modifications

The prototype was based on a lengthened T-80U hull, with an extra pair of road wheels (seven on both side) and a brand new turret. It appeared to have had very thick front armour and new-generation Kaktus explosive reactive armour on the hull and turret. The turret had a very large, box-shaped turret bustle instead of the traditional dome shape of previous Soviet and Russian main battle tanks.

There was debate about whether the Black Eagle would incorporate the Drozd or Arena countermeasure.

The T-80UM2 Black Eagle was a prototype main battle tank, based upon the T-80U.