The situation at Lysychansk area of operations has worsened. Russian forces captured several towns as Ukrainian troops retreated from the area of Zolote and Hirske. The enemy is also attempting to encircle Ukrainian defenders in the area of Novoluhanske and the nearby powerplant.

Ukrainian Army is reportedly conducting an offensive towards Kherson, but the operation is under an embargo and no details were shared to the public.

Important note: Due to the high intensity of shelling across the whole frontline, it has become almost impossible to track the shelling. Starting today, the “fire mark” indicates only battles and a fire map layer (known as FIRMS by NASA) has been added to the maps. 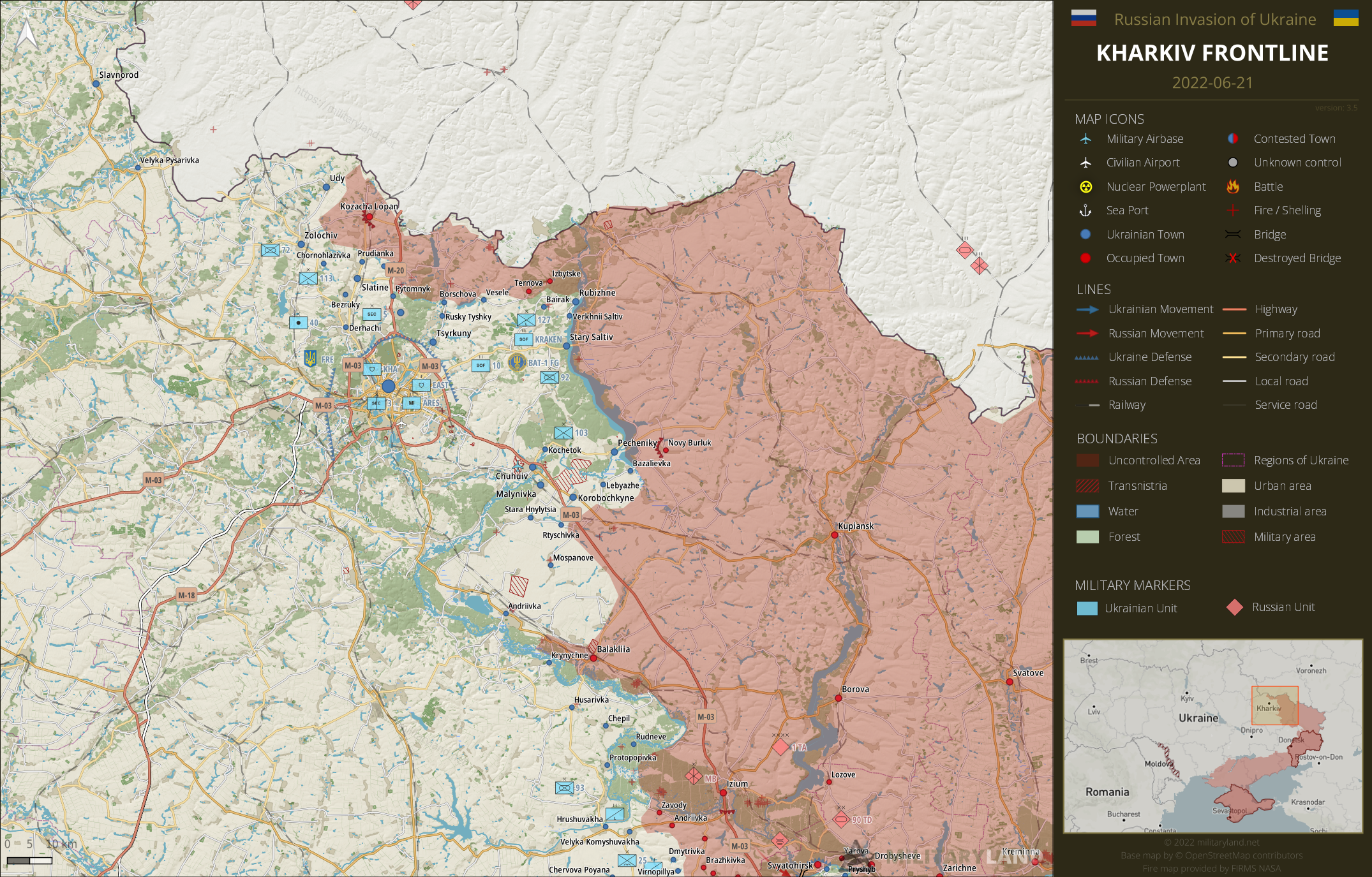 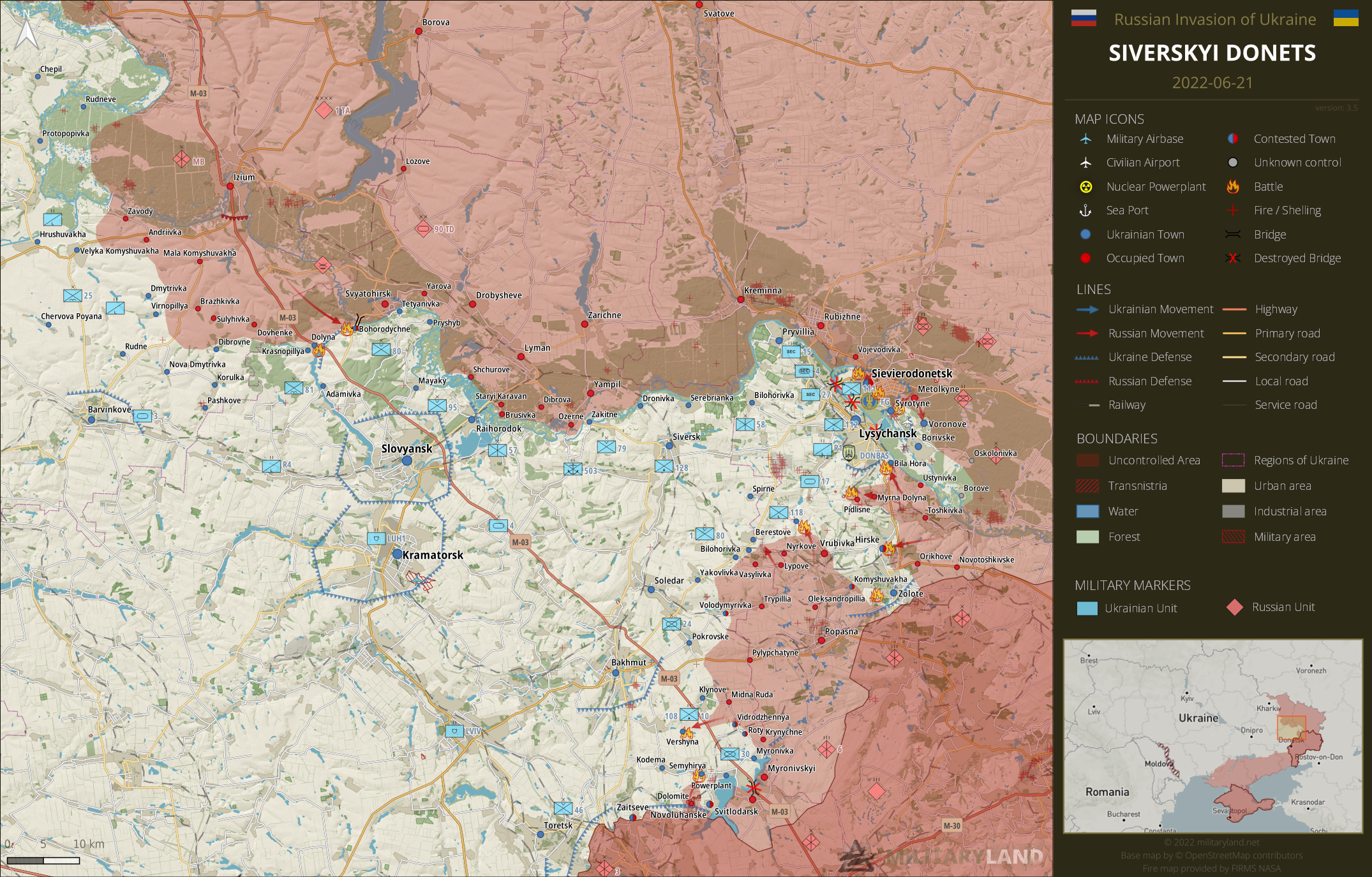 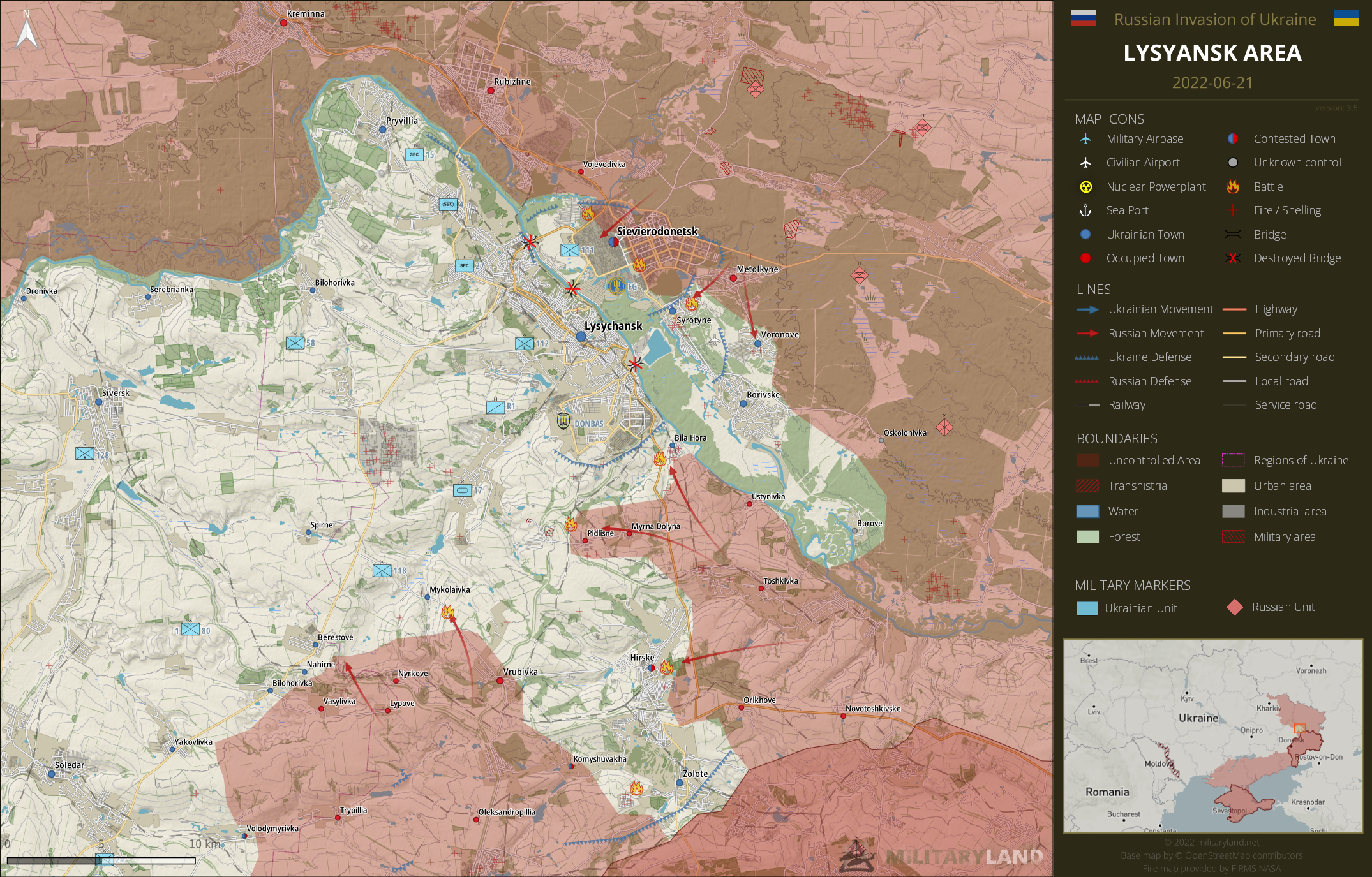 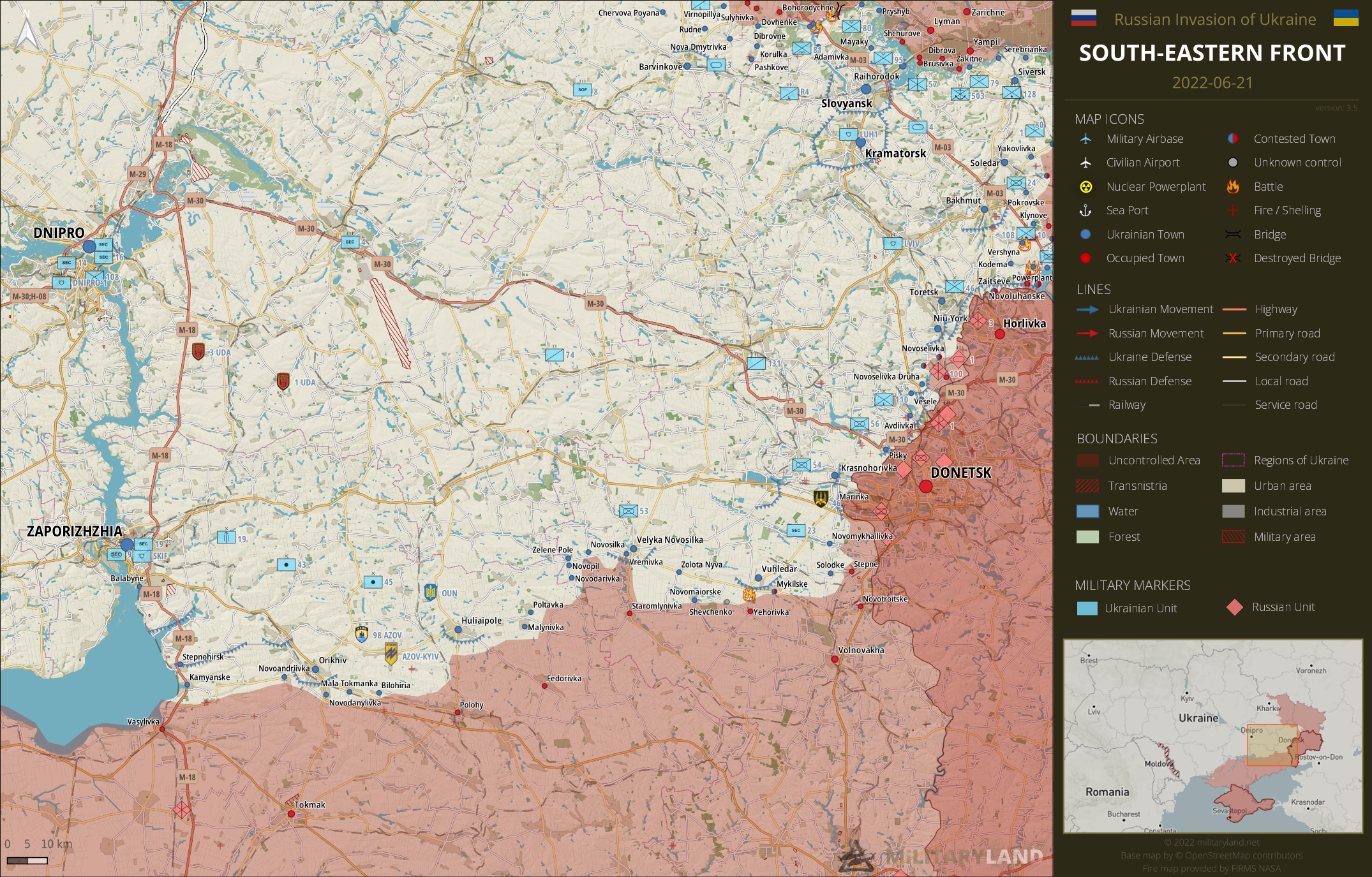 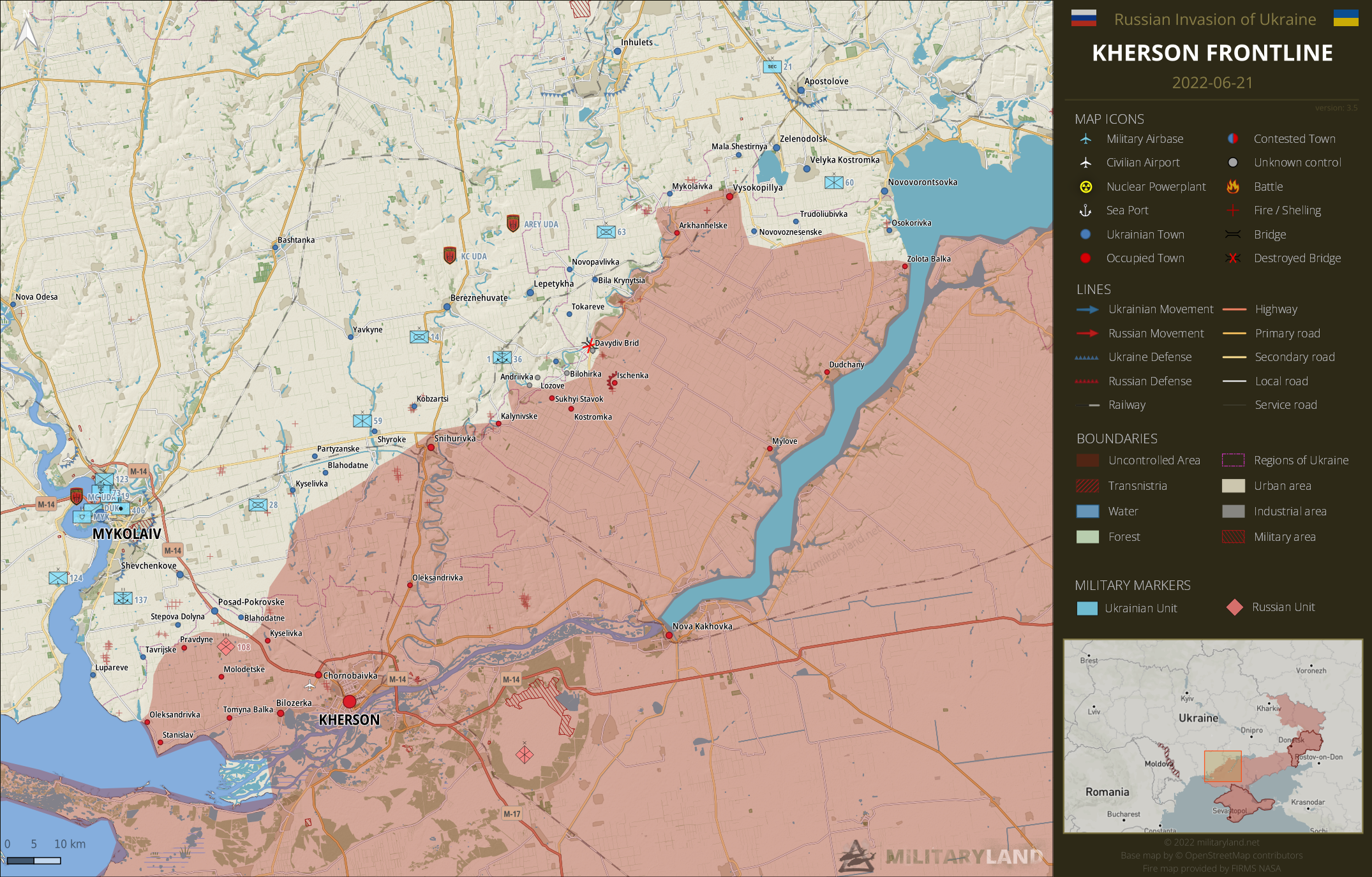 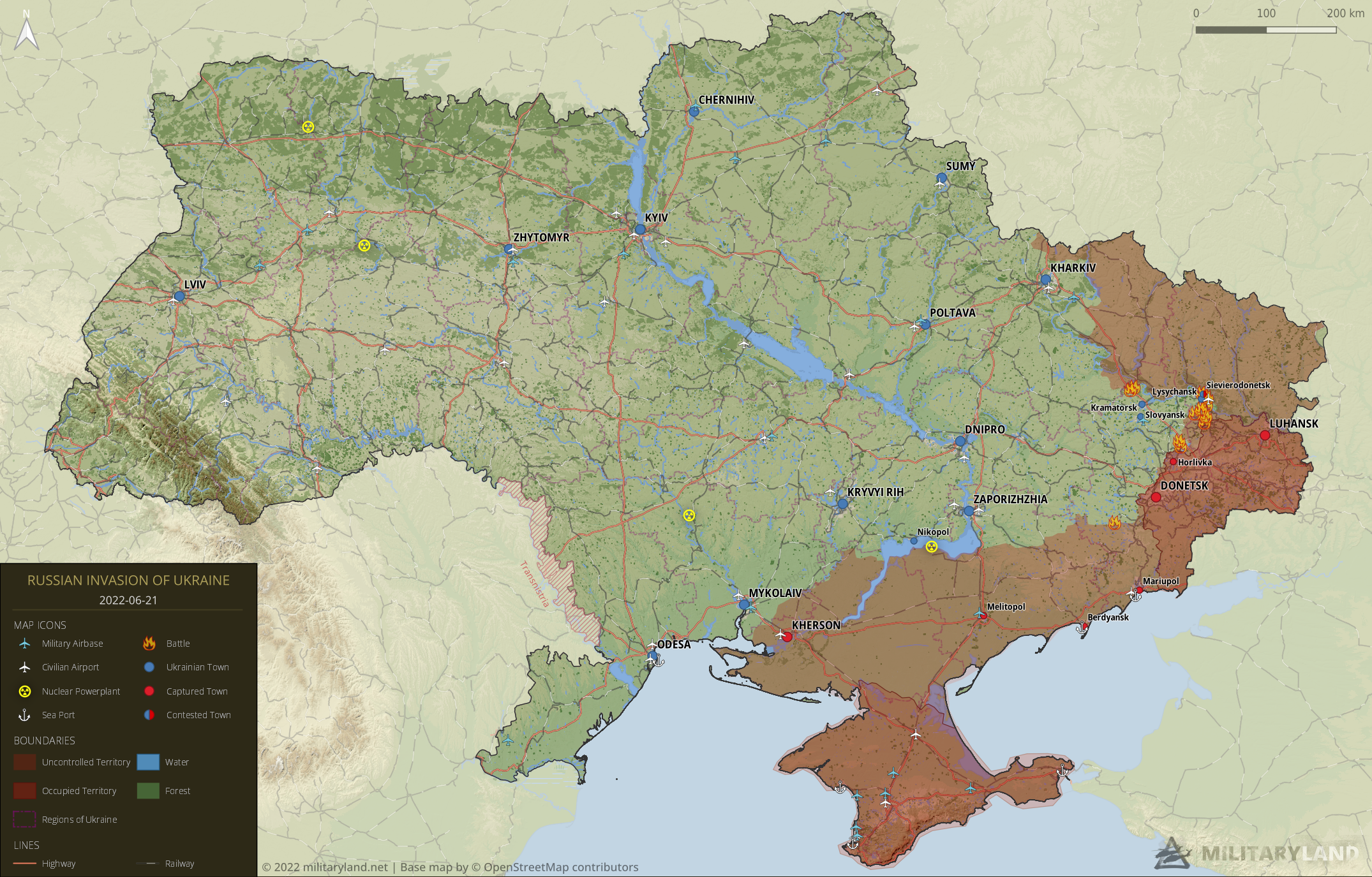 Hey there. I have seen numerous sources that the Zolotoe encirclement has followed through and around 2000 Ukranian troops (lowest estimate at 1500, highest at 2500) have been fully encircled after Russian forces fully captured Mirnaya Dolina and Loskutovka. I have seen a few photos with Russian forces in that area, but I was wondering if you could confirm this to be true or not. Also apparently Borivske is now contested since Russian troops have… Read more »

Only ukrain leaders know how many troup are still in this aera.

That is why I said “estimated”

Translation from Google, reluctance to bother yourself: the Zolotoe-Gorskoye ring is full, but there is not much anyone there, except for the scattered remnants of the wsushniks. According to the calculations of the Russian side (Rybar and others), about 500 people. The rest withdrew and were transferred to Artemovsk.

Seems pretty clear that the Ukrainians just fought it out and pulled out of there today. Over and over they choose to stay out in salients until the last minute because they’re confident in being able to fight their way through and it’s an opportunity to attrite Russian forces in close fighting instead of always dealing with them behind their wall of artillery fire. Had to figure the trolls would be going on about “encirclements”… Read more »

In Lyssytchansk the Ukrainians have a position in height which makes it possible to keep the Russian army away from the last part of severodonetsk. the Russians absolutely want to take severodonetsk, they are surely losing a lot of men to be able to occupy this city. the Ukrainians surely want to keep this position until the last moment when he risks total encirclement. it allows to reinforce the next position where they will resist… Read more »

It became obvious weeks ago this was Ukrainian strategy in Sievierodonetsk. People allow themselves to be confused by Kremiln troll sources that are shown to be completely making things up, over and over. These guys are citing “sources” that claimed Russia was in complete control of the city weeks ago. The same “sources” that claimed Russia hadn’t invaded after they invaded and then claimed that Ukrainians apparently raped and murdered themselves in their own streets.… Read more »

However, they went out in the direction of Artemovsk, that is, not to the road, to protect it. The situation in Lisichansk is critical at the moment. Does this mean that Lisichansk will become the second Mariupol? I personally don’t believe.
P.S. Information about how much is left inside Zolotoy-Gorsky is still contradictory.

Sure thing, “John.” How about citing some of those “numerous” sources?

the Russian forces would be about 3 km away from the complete closure of the caldera around Gorsky and Zolotev, since most of the units of the Armed Forces of Ukraine during the previous two days abandoned their positions in Gorskoye and Zolote along the last remaining highway between Vrubovka and Ray-Aleksandrovka.

Thanks for your job. I’m from Ukraine, working as a Fixer with US media. And your maps are helping me a lot!!

Can you increase the size / magnification on the maps please. I use a 27″ monitor and I still struggle to see the detail

What’s kind of weird about this Kherson embargo thing, Ryibar (pro-Russian source) is also very muted about it recently. All he’s said was “RF expanded the zone of control west of Snigiryovka”. But the maps he’s publishing are showing a gradual advance towards Mikolaiv, with no comment. This advance – or actually a counter-advance – envelopes the force that is pushing towards Kiselevka. So in this case neither side is saying what’s going on.

Today, ru shell kiselivka and Shevchenkove (north of kherson). So ua have liberate them.

According to the map,
Shevchenkove has never been captured.
Also there are two Kiselivka: One in red (north-west of Kherson), and an another one in blue (a long way north of Kherson).

Yes. After this war, onu should sent a commission in ukrain to reform the name of their cities. They litteraly have hundred of settelment with the same name.

Thank you very much for these detailed updates!

Man, it’s crazy how long Ukraine will stay out in those salients when it seems like they should pull back. They just don’t seem overly afraid of being surrounded by Russian forces. They sort of double dare the Russains to go for it and then engage them in grinding attritional fighting. Still seems to me that they’re doing what they need to be doing in degrading Russia’s combat power now, while they’re on the offensive.

The Russians don’t do well in urban warfare. It needs their top troops not the new conscripts. The Ukrainians just try to tie down the top troops and bleed them. They cannot be replaced. Put the conscripts in and it is a meat grinder.

The same thing happens on the Ukrainian side , only the special forces and foreign mercenaries are enabled for urban combat , the rest are cannon fodder , who in some cases flee from their positions when things get complicated

I never heard of any mercenaries fighting on Ukr side, only volunteers. Where do you get that info? Only mercenaries I’ve heard are fighting for russia.

Yes ! warriors who have voluntarily gone to Ukraine to fight for a country that is not their own in exchange for money

Bizarre logic! according to this formula all (paid) Russian soldiers, who are fighting in a state other than their own (in Ukraine), can be considered mercenaries in the same way.

perhaps an exception could be made for conscripts, who may be in a combat situation against their will, but the same cannot be said for professional fighters, who have chosen the trade of war of their own volition.

Yes ! warriors who have voluntarily gone to Ukraine to fight for a country that is not their own in exchange for money

well no, the volunteers who fight in Ukraine do not receive money, they receive the same salaries as Ukrainian soldiers, that means ridiculous sums for Westerners

Anyone who does not originate from an army or a country but who fights on their side for financial remuneration would be considered a mercenary. and as such there are already 3 people who have been sentenced to death, two British and one Moroccan

But those 3 guys were in Ukrainian army before the war, as far as I remember. Besides, only way for foreigner to join war on Ukraine’s side is to join their army. That by your definition makes them regular army, not mercenaries.
On the other hand, russia uses mercenaries like Wagner, or they are importing them from Syria and wherever.

the conflict started in 2014 and those guys were not in Ukraine at the time. and the fact that Ukraine gives them nationality and officially integrates them into its army, they do not stop being mercenaries of the enemy. On the Russian side, yes, the Wagner group are mercenaries, it is a company that is officially dedicated to intervening in conflicts in exchange for money. The Syrian mercenary thing was nothing more than cheap war… Read more »

Ok, so what they waren’t in the army in 2014? Lots of Ukrainians waren’t too. You gave your definition of a mercenary, which backfired in your face, so now you try to work around it 😀 Thats just textbook russian troll. You push your narrative over and over, even tough the facts prove you wrong. And before you deny beeing russian troll – the fact that you describe foreigners fighting in Ukraine as “mercenaries of… Read more »

I am not Russian, but given a choice, I prefer a Russian to a neo-Nazi with swastikas tattooed on his body, and of course I prefer a people who renounce their country for not accepting a government imposed after a coup.

Your are ridiculous. Ukrain is not a néo nazis state. Its absurd, just bullshit.

Russia is a dictatorship.

Ukraine is not a neo-Nazi state, but the NEONAZIS are inside the Kyiv government and are 100% financed and armed by Kyiv. so I say it again… I prefer a Russian than a neo-Nazi with swastikas tattooed on his body, or someone who supports and finances him

Nazis supporting Putin/Donbas separatists. It can be useful:

You are blinded by your own ruzzian propaganda.
You do realize you write really foolishly about things you do not know.
People see through your deviousness.

actually they were spoted around in small numbers. Russia *is* also recruiting in Africa under Wagner umbrella.

you are writting nonsense. There is an important legal difference between a mercenary (like Wagner or Blackwater) and volunteer. And this difference is described in international law regarding war conduct (regarding soldiers, insurgents (they are protected as well) volunteers and mercenaries). And no – these guys are not mercenaries – they are sworn soldiers of Ukrainian army. What Russia says about has no meaning, it’s just yet another Russuan war crime.

the international volunteers who fight in Ukraine do not fight for money, they have the same pay as the Ukrainian soldiers, they are incorporated into the Ukrainian army and often they are even obliged to pay and even the equipment that ‘they use while on the Russian side the mercenaries receive sums tens of times larger than the simple Russian military