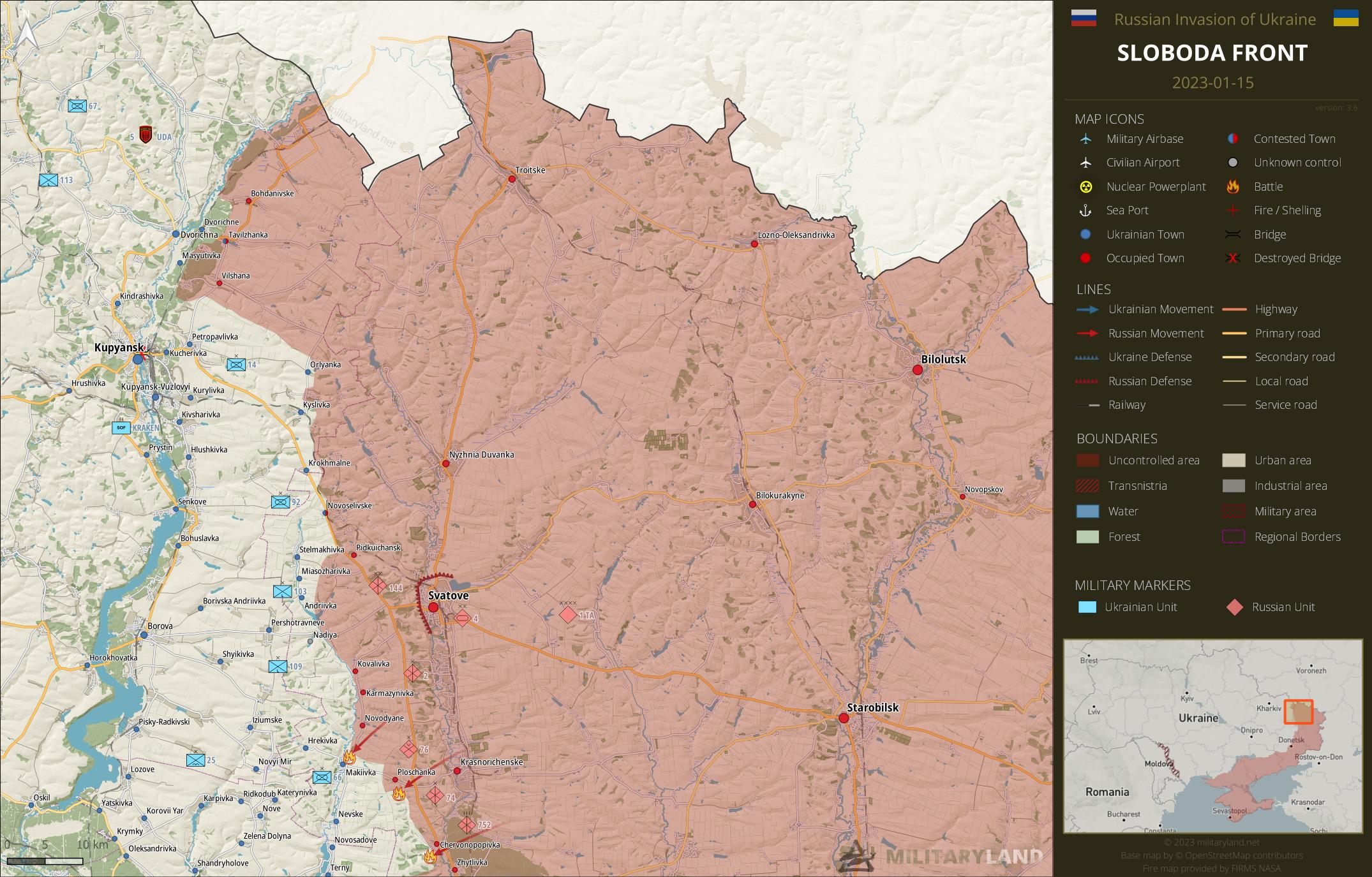 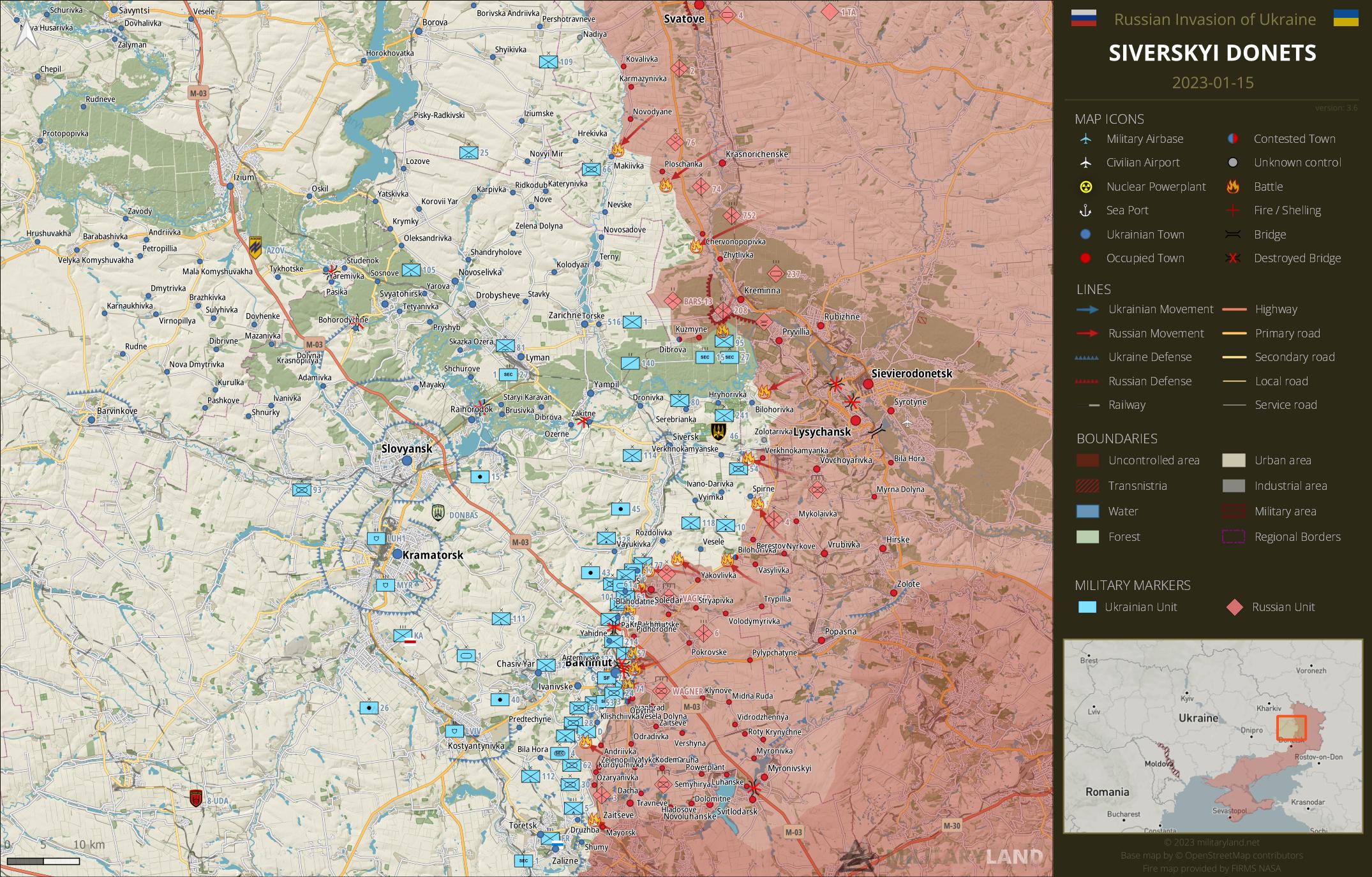 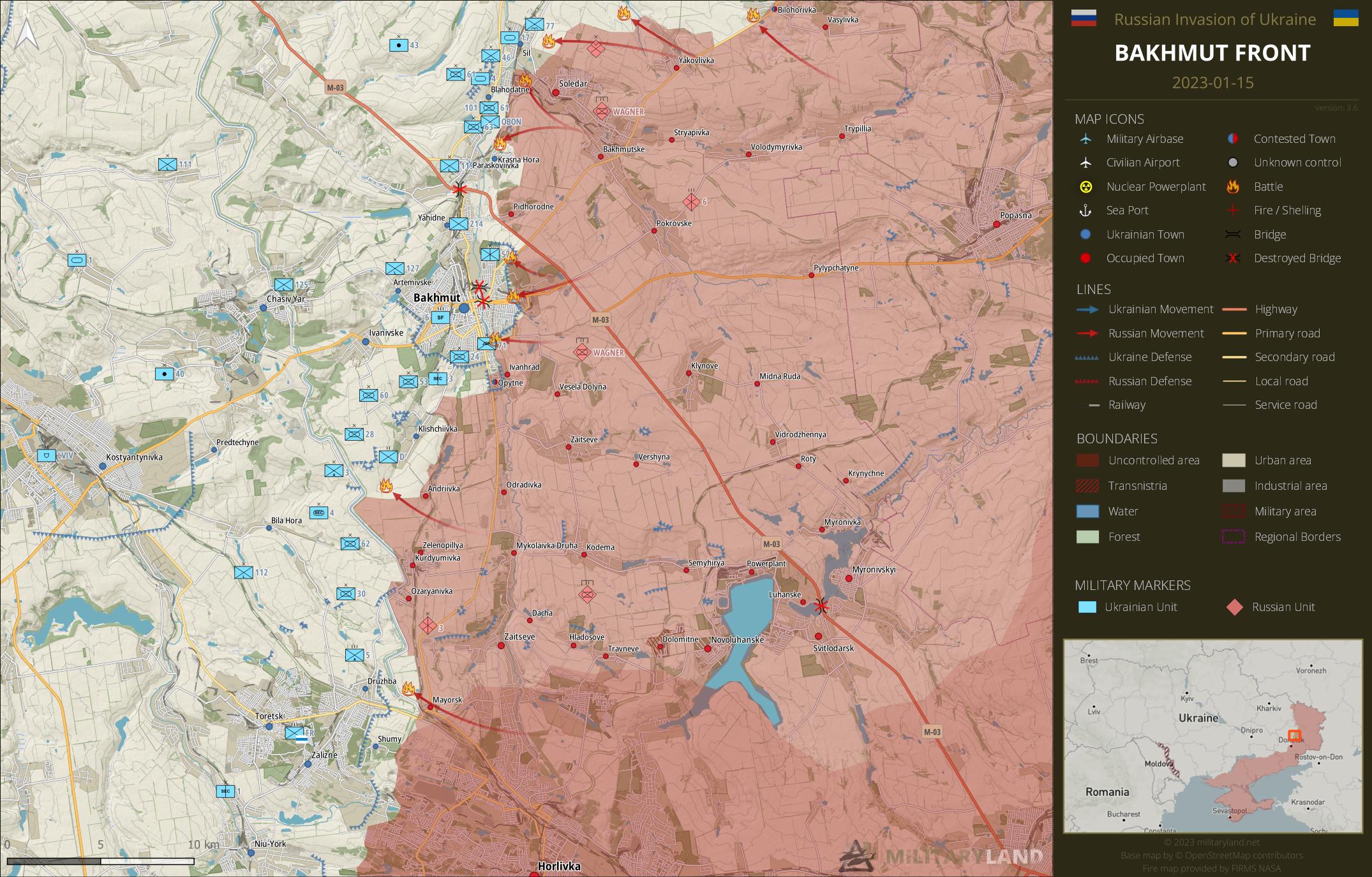 Note: Sil is actually part of Soledar town, but given the fact that Ukrainian General Staff reports Sil and Soledar separately, I’ll keep it the same way. 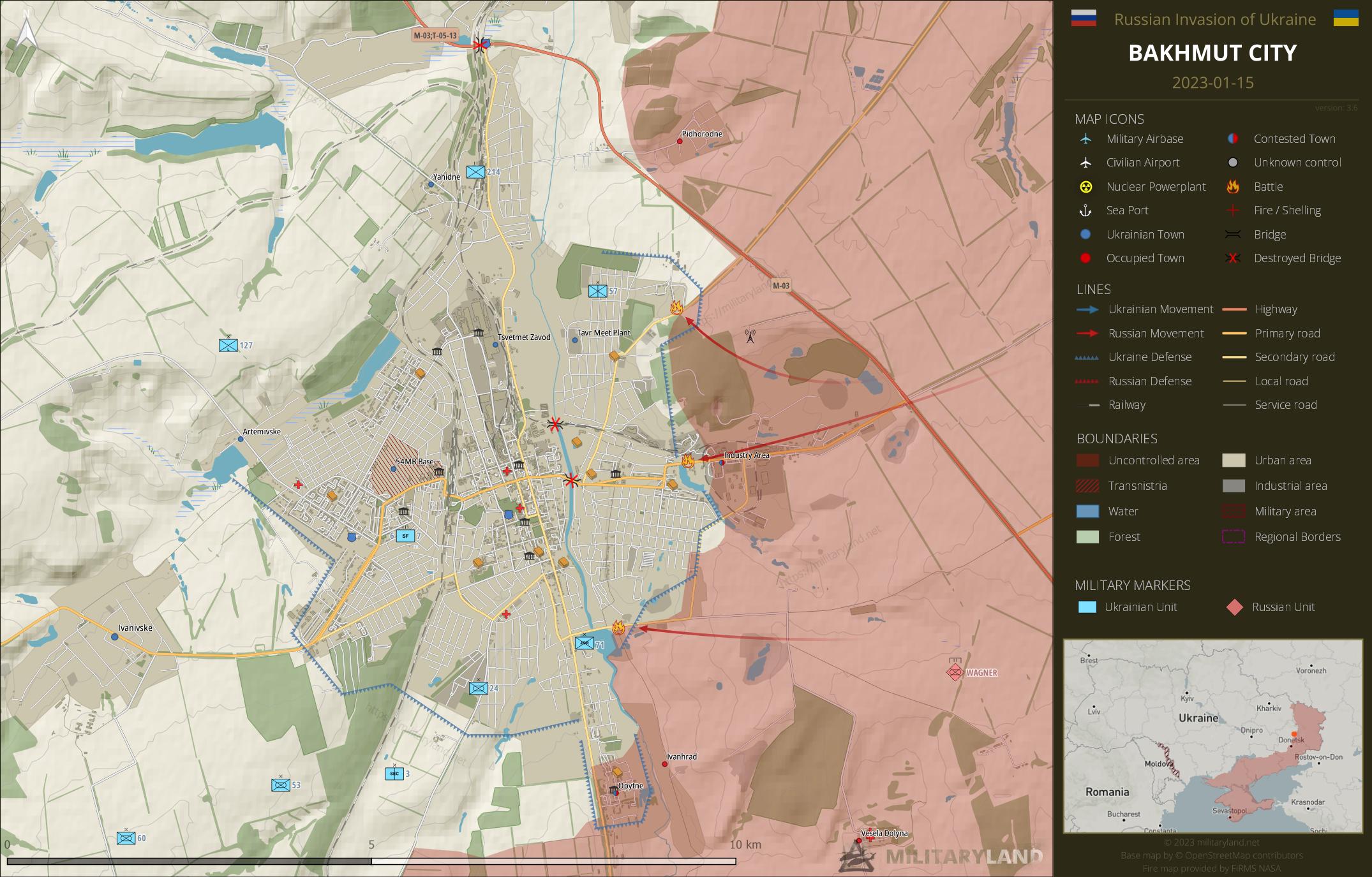 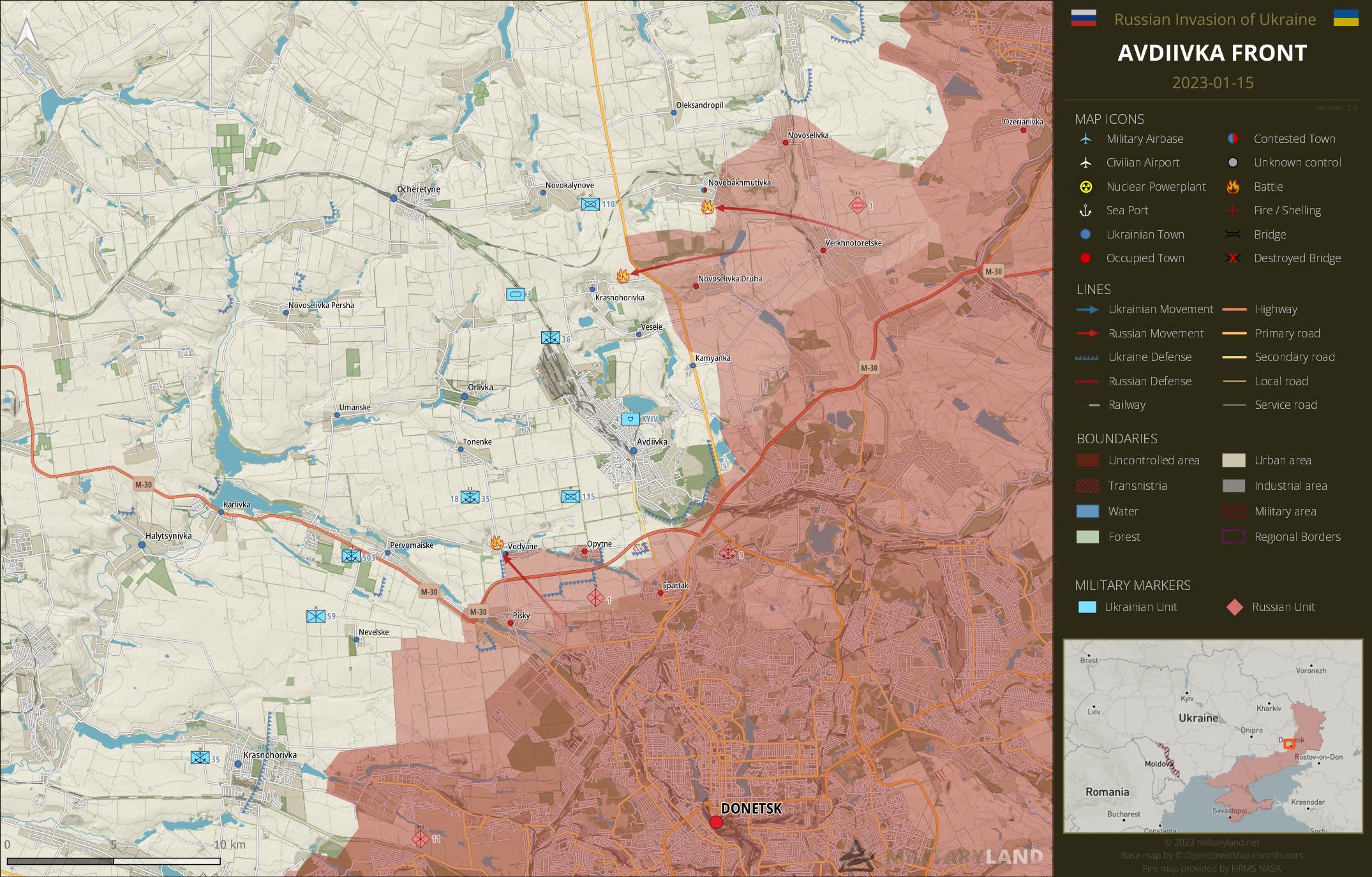 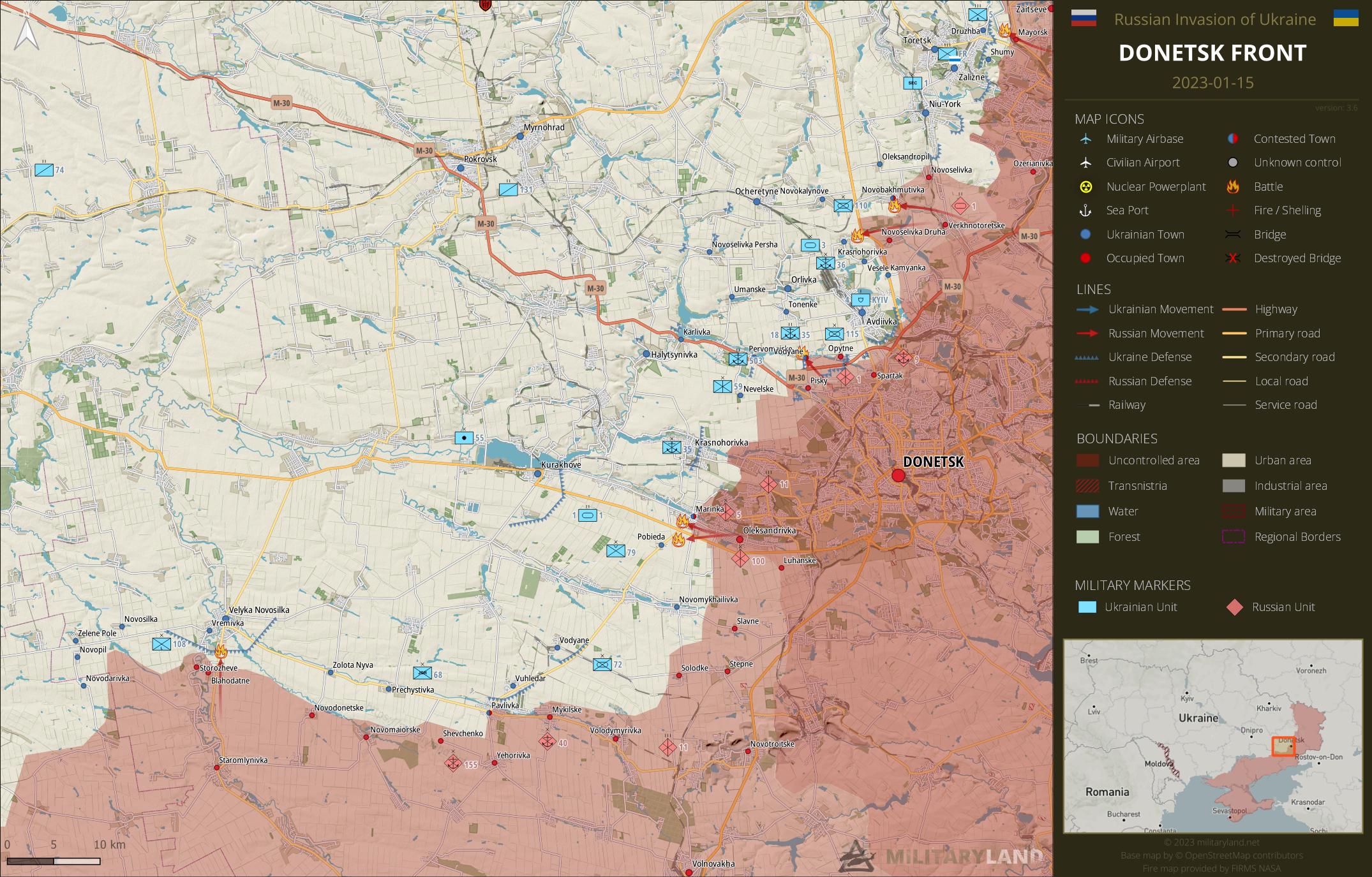 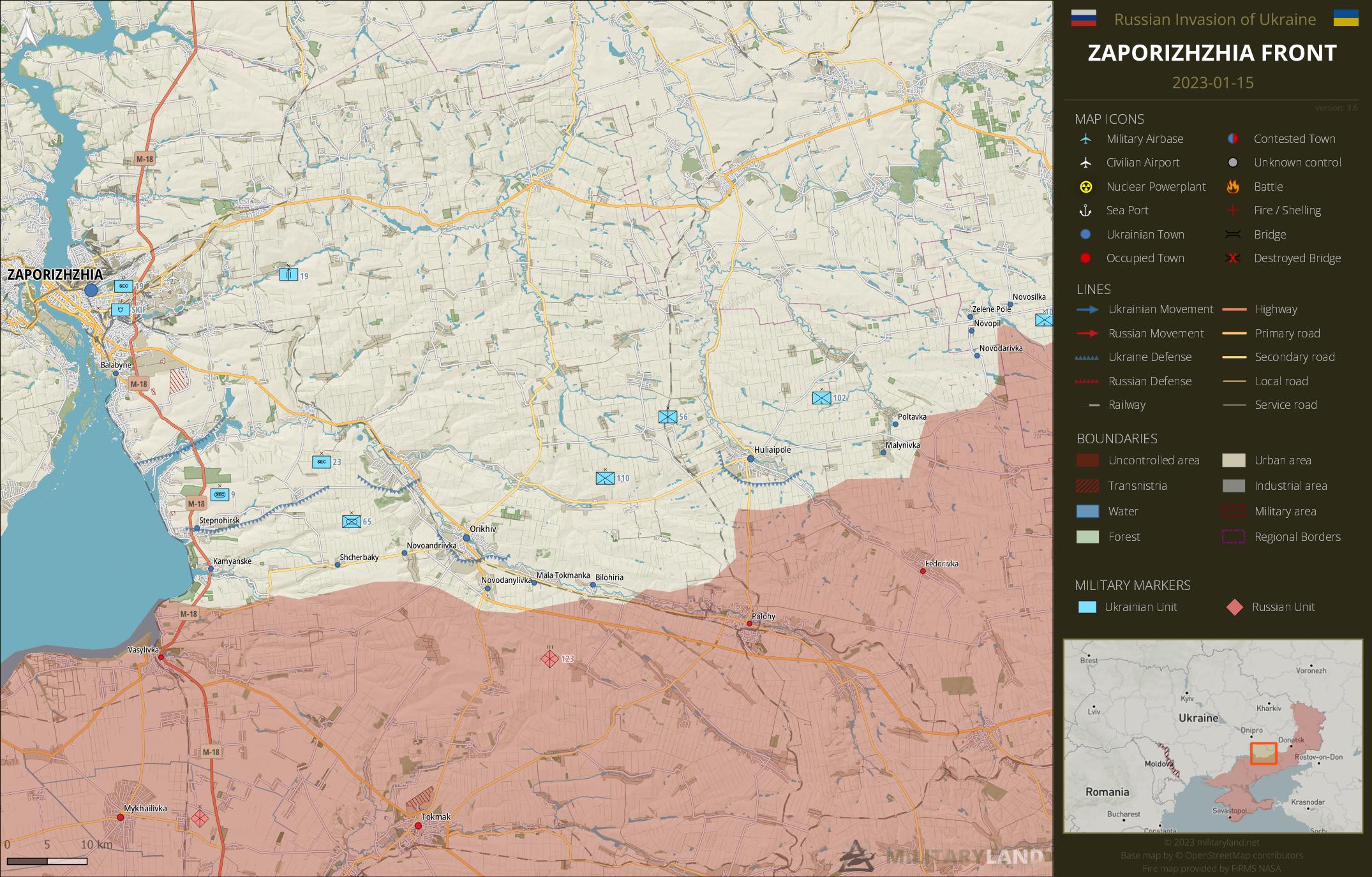 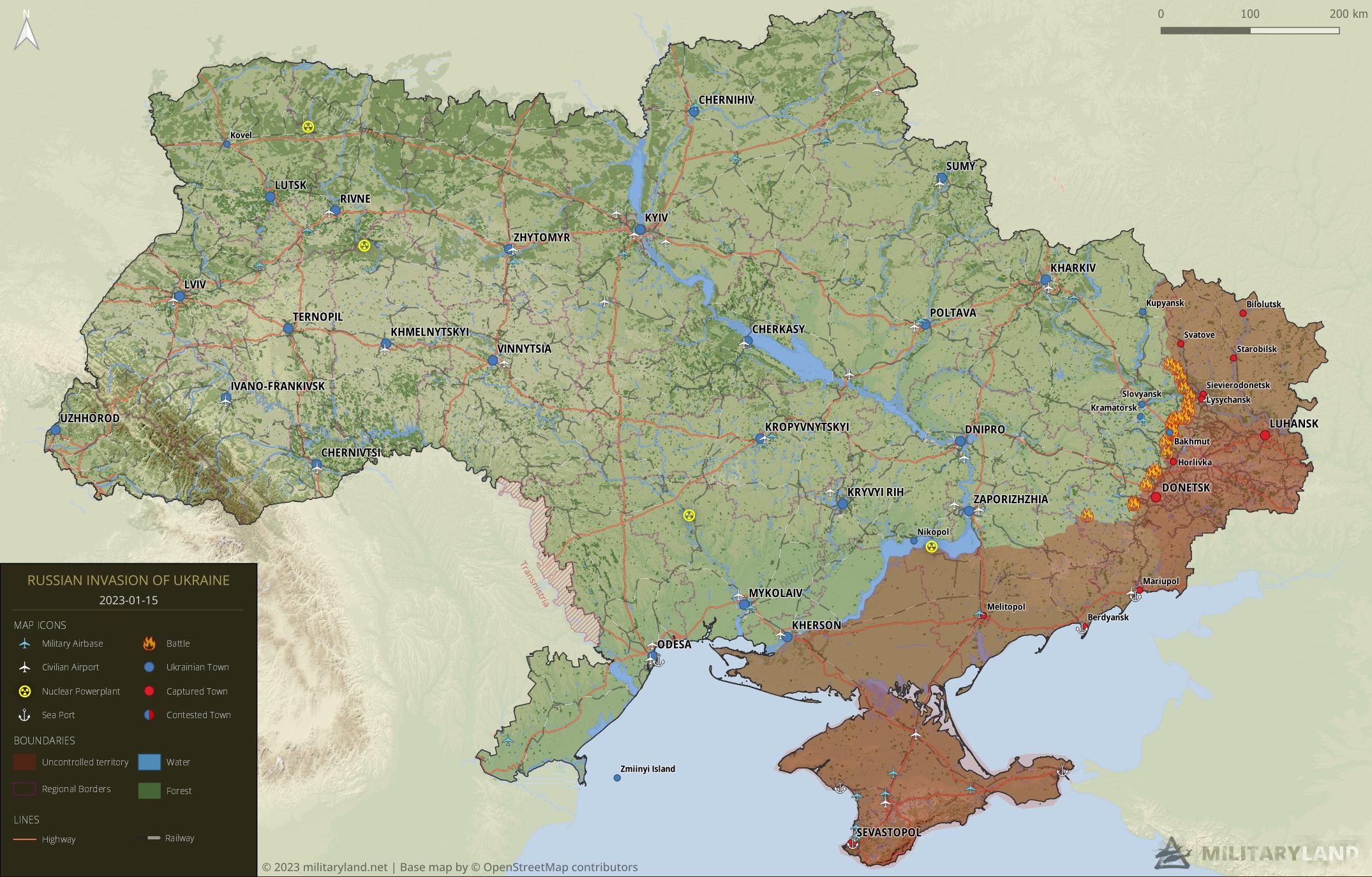 And Russia has apparently provided a list of 200 servicemen held in Ukrainian captivity. Interesting 4 times less. That’s according to the Turkish Ombudsman who is trying to facilitate new POW exchanges.

700 000 Ukrainians mobilized, tons of NATO ammunitions and equipments but they still cannot advance or launch counter offensives to Zaporija ? Donetsk city ? Melitopol ? What are they waiting for ? Cold and frozen mud to move the vehicles or more ammunition from us ?

The warmer weather (which means mud is not frozen) explains a lot. Russian mobilization also helps them, even if they are throwing mobiks to the meat grinder just to slow down Ukrainian attacks (or advance a few km to claim symbolic victory).

But if the West (read, Germany) finally decides do give the heavy stuff Ukrainians need for counter-attacks (tanks and IFVs), that would be something.

Exact, I do not understand the slowness of Germany … I mean everyone else is giving or promising fast deliveries of heavy weapons but Germany is like a snail… what do they fear ? I mean all their equipement will be better in UKR hands than rusting in a obscure depot for thousand years in Germany…..

Because we don’t want the headline “German tanks roll against Russia” again? Germans do have a very (too?) sensitive antenna for these historical allegories. In addition, Chancellor Scholz seems to have some serious legal problems and one of the key witnesses sits high&dry in Moscow under the protection of the Kreml

But we (in Czechia) think that it is only the traditional alliance between Germany and Russia, which has always applied to the division of countries between them. German tanks against Russia did not occur to me, I see it more like Ribbentrop–Molotov…

The reality (about which nobody is talking about) is that G demilitarised itself so eagerly in the beginning of the century (but you know “evil militaristic NATO!”) that today Slovakia (working metaphor) would conquer it with no problem. Add decades of negligence, political messing around and RU substantial influence. Bundeswehr is a mess. The tragic story is: there is no tanks to give.

I am pretty confident that we will let others send lepards within this week, at least. My guess is that we will send some too. Yes, concerning our military stocks we are actually stretching them hard to keep up. In total support measured in money we are second only to usa. Are we slow? Oh yes! But we have a ‘nie wieder’ to get over and we stand with ukraine. Yes, looking at you, france.

again german tanks shall kill ppl in easteurope in the name of a totalitaristic ideology … What is wrong with this country germany?

2nd time: Propaganda, obviously. Pure Kremlin narrative. Does not contribute whatsoever to what is intended by this website.

Well, this is a war of attrition. A soldier can only die once, so the Ukrainians are wise to stick to their tactics. In addition, I believe that NATO countries won’t give away all this stuff without having a say how/where/when it is used (as in: there is a lot of military advisory from western countries)

Please write to Zaluzny about your masterful plan.

If you really look at the numbers (not prole mises) the help until now is kind of homeopatic. Enough to keep going, even muster an assault on unprepared and stupidly arrogant and incompetently led forces (Kharkiv) but not enough to get even real parity in hardware.
So – yes. They need more. Really *more*. –>

and there are serious logistical issues to master, too.

real IFVs (‘boxes on tracks’ were better than nothing and they are useful, still – they are not up to the job needed), tanks and aviation (about we “the concerned West”) are still shy about. There is some progress – every time when RU “eliminates” another 3-y old “nazi” something is pushed on the rails. How many of these “nazis” must die?

Something I do not understand : Ukrainian forces succeed to push in Izium / Lyman and Kherson region very fast and with tremendous results, regaining lost territories ten times faster than the russians did…. But now I see that Ukrainian forces are not are stuck and cannot go through russian lines anymore ? Is this an issue with logistic and winter conditions ? Mud and rain preventing offensives

more meat in the fry. To make even very weak unit to r

–> missclick, sorry –>
to rout you need to inflict some damage. You also have less opportunity to manouver if the troop saturation is higher. Weather impaires both sides. Ukr is slowly going into Kreminna but slowly.
(if they would throw few thousands convicts into the grinder, you’d see “better progress”)

I don’t think Russia’s recent gains are surprising. After they successfully retreated from Kherson, the mobilization, and months of bloody battle in Donbas, Russians managed to advance, just like what they have done after retreating from Kyiv. The question is, can they take the advantage of this and force the Ukrainians to abandon fortified cities (Bakhmut and Avdiivka) by enveloping?

Remember – Routs are not retreats.

You just believe what you want to believe

And volunteers are not mercenaries.

Ukrainian retreat tactically … Soledar and Bakhmut are only small cities without any strategical importance…. Russians will face the harsh reality of Ukrainian warriors when trying to push to Kramatorsk and Sloviansk…no need to stay in Soledar, just winning time with fixing Wagner groups together and bomb them afterwards

If Bakhmut and Soledar are “ only small cities without any strategical importance“, why do thousand of Ukranian soldiers die for it?

Please provide source for “*thousands* [for Bakhmut and Soledar]”

Well it’s clearly not 200 or 300… The level and intensity of fighting is such that thousands is not an exaggeration. You don’t really need hard evidence. There are plenty of articles in the western press.

I am really not impressed by ‘Western Press’, the bar for journalism is quite low nowadays even in supposedly prestigeous papers. Also the Western Gaze is very strong in these – not always in such ridiculoius ways as in case of Mearsheimer (or completely clownish/clinical like Petersen) in which case the most intelligent in competent parts are spaces between the words – still the quality —>

—> leaves a lot to be desired.

A lot of this is a part of degradation of audience problem and intentional quality downgrade but the matter of particularity of Western (in numerous forms, ‘The West’ is not a singular object) imaginations should not be underestimated.

Hundreds.. yes it is believeable. If you say ‘thousands’ (in these last weeks) there would not be a many left. –>

—>
and there is a question how much of the loses are irreversible, question about late loses (RU has horrific records there) etc.

I agree with your diagnostic of the press. Standards are falling in line with the quality and level of education of the public at large. As for losses, I tend to believe in the meatgrinder allegory, which suggests exceptionally high rates of irretrievable losses, but that’s a subjective view obviously.

250 ukr casualties per day is estimated on the eastern front. Say 200 WIA and 50 KIA per day. It all mounts up.

Thousands ? Send me sources and reports … yes they suffer heavy casualties but there are only ten UKR bataillons deployed around Bakhmut / Soledar, about 10 000 men…. It means that this area has very minor importance and the defense against Russians cannon fodder wave is done to concentrate Wagner and mobiks in these area when other more important occuped places will be liberated in the spring

What kind of Russian gains are we talking about? The non-complete conquest of a completely destroyed settlement of only 10,000 people (almost all of them left before the Russian advancement) and a bunch of small one-story houses after almost one year? Anyone would be embarrassed to put that down in a resume of military achievements. FYI Kharkiv oblast more than 2.5 million, Kherson city 300,000

Ruzzia has no gains and victories to speak of in ukraine, bring death povery and destruction. Whatever Ruzzia manages to occupy they’ve turned into poverty, depopulated wastelands and rubble they won’t bother restoring. That is the sad disgusting legacy and doctrine of a pety Ruzzian KGB bureaucrat leader stuck in the cold war era, with schooling in subversion, blackmail and cohersion.

Right, they lost much more than what they have got, but at least the Russians can threaten Bakhmut and Sieversk this time. I am not saying that Russians are going to win this war, however, well, they may successfully break through the Ukrainian line of defense this time.

I have to disagree. Storming and taking a well-defended city of 12.31 km² in 2 weeks is no small achievement in military terms. The number of civilians is irrelevant to measure success

wm… you should check your calendar. They were attacking the Soledar *much* longer than ‘2 weeks’.

I meant from the moment they reached the outskirts and the onslaught started. I know they started bombing months ago.

they were ‘on the outskirts of Soledar’ since September, give or take a few days. And I understand the emotions of the last weeks but that was another – this time successful – of such operations. Soledar, just like Bakhmut were stormed with various (until now) effects literaly for months in the ‘throw enough shit and smth will break eventually’ fashion.

Allways falsifying the reality… are you an iSW analyst ?