UNITREP is our new series focusing on the current status of Ukrainian units. We begin with the Royal Brigade. 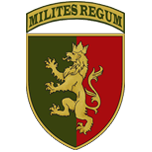 24th Mechanized Brigade, known as Royal Infantry Brigade, is one of the best Ukrainian mechanized brigades. At the start of the Russian full-scale invasion, the brigade was deployed to Luhansk Oblast, more precisely to the ORLDO frontline in the area of Popasna, Zolote and Krymske.

The first days of Russian invasion passed without significant changes because the Russian army focused on different parts of Ukraine. The enemy launched a ground offensive in March and met fierce resistance by the Royal soldiers and aligned units in the area.

The heaviest fighting ragged in Popasna, during which the soldiers of 24th Mechanized Brigade caused significant losses to the invaders. The battle for the town lasted two months and left the city completely destroyed. After the withdrawal from Popasna, the brigade continued to defend nearby surroundings and also dispatched a combined group to reinforce the defense of Sievierodonetsk.

On June 6, Ukrainian President Zelensky visited the brigade’s positions in Luhansk Oblast and thanked them for the service.

24th Mechanized Brigade was withdrawn from the battlefield in July in order to replenish the losses and give the brigade’s servicemen well deserved rest. Many of them were deployed to Donbas for a period longer than a year. However, small elements of the brigade continue to be deployed in Donbas.

At least two hundred of the brigade’s servicemen were wounded or captured during the fights since the start of Russian invasion.

A typical Ukrainian mechanized brigades is 3 000 men strong. If we count 300 losses (give or take), then 24th Mechanized Brigade lost ~10% of its strength, which is surprisingly low given the fierce battles in Popasna and nearby area.

No additional battalions have been formed since the beginning of the Russian invasion.

The brigade lost three T-72AV tanks, one T-72AMT tank and one BMP-2 infantry fighting vehicle. You can check the losses in our Losses database.

The unit’s page has been updated with up-to-date information. Make sure to check it out for more information about the brigade -> 24th Mechanized Brigade