Update on recent developments of de-escalation zone at Stanytsia Luhanska bridge, where both sides agreed to fallback its equipment and soldiers.

As we reported at the end of June, Ukraine and separatist forces have agreed to create a buffer zone around a pedestrian bridge near Stanytsia Luhanska and withdraw its forces 1km away. Ukrainian side begun to dismantle its fortification in July, followed by separatist forces and even the president of Ukraine, V. Zelenskiy paid a visit to the area. You can read more about it in our article released on July 7.

Separatist forces, as of September 7, removed all fortifications on the bridge. The only thing that remained is a JCCC (The Joint Centre for Control and Co-ordination) shed with the flag of so-called Luhansk People’s Republic. The shed wasn’t there before and Ukraine already put a protest against it. Ukrainian forces see it as a potential threat and according to Minsk agreements, there shouldn’t be any military related structures on the bridge. LPR initially refused to comment on the situation but they later released a statement that Ukraine just hides the fact they aren’t ready to repair the bridge. 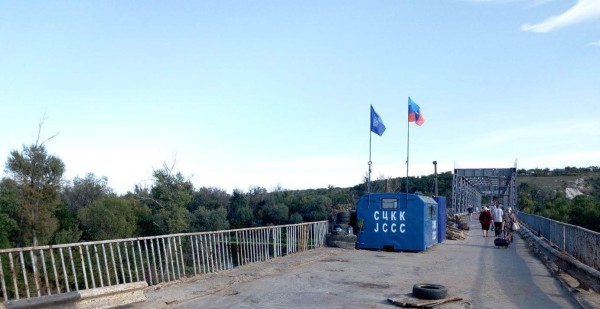 Both sides deployed teams of State Emergency Service in order to demine area around the bridge. According to Ukraine, once all requirements are fulfilled by LPR side, they are ready to repair the bridge.

As seen on the photos from the area, both sides installed several flags on their side of the established buffer zone. Ukraine later removed the flags due to ongoing repairs of power poles.