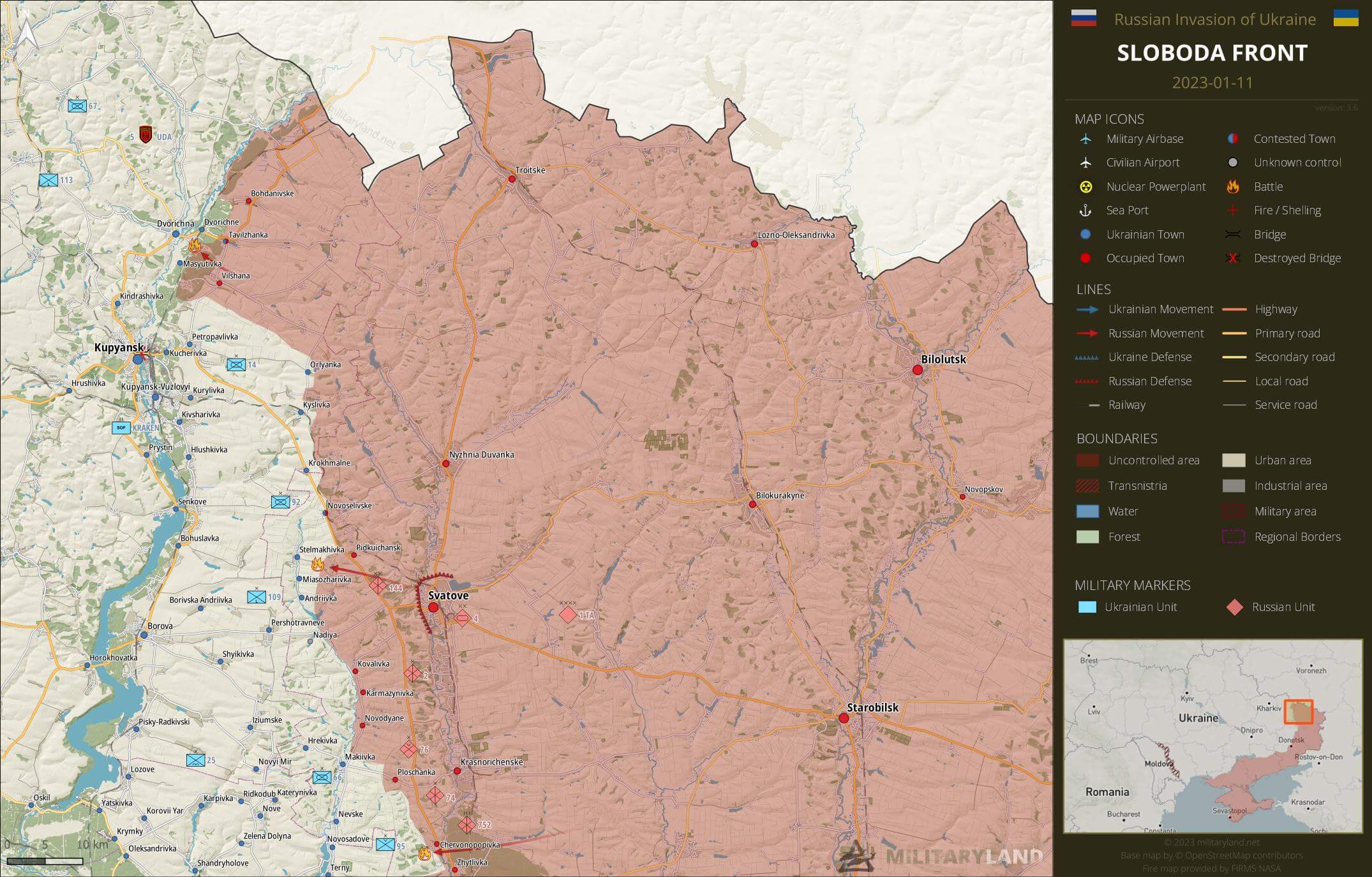 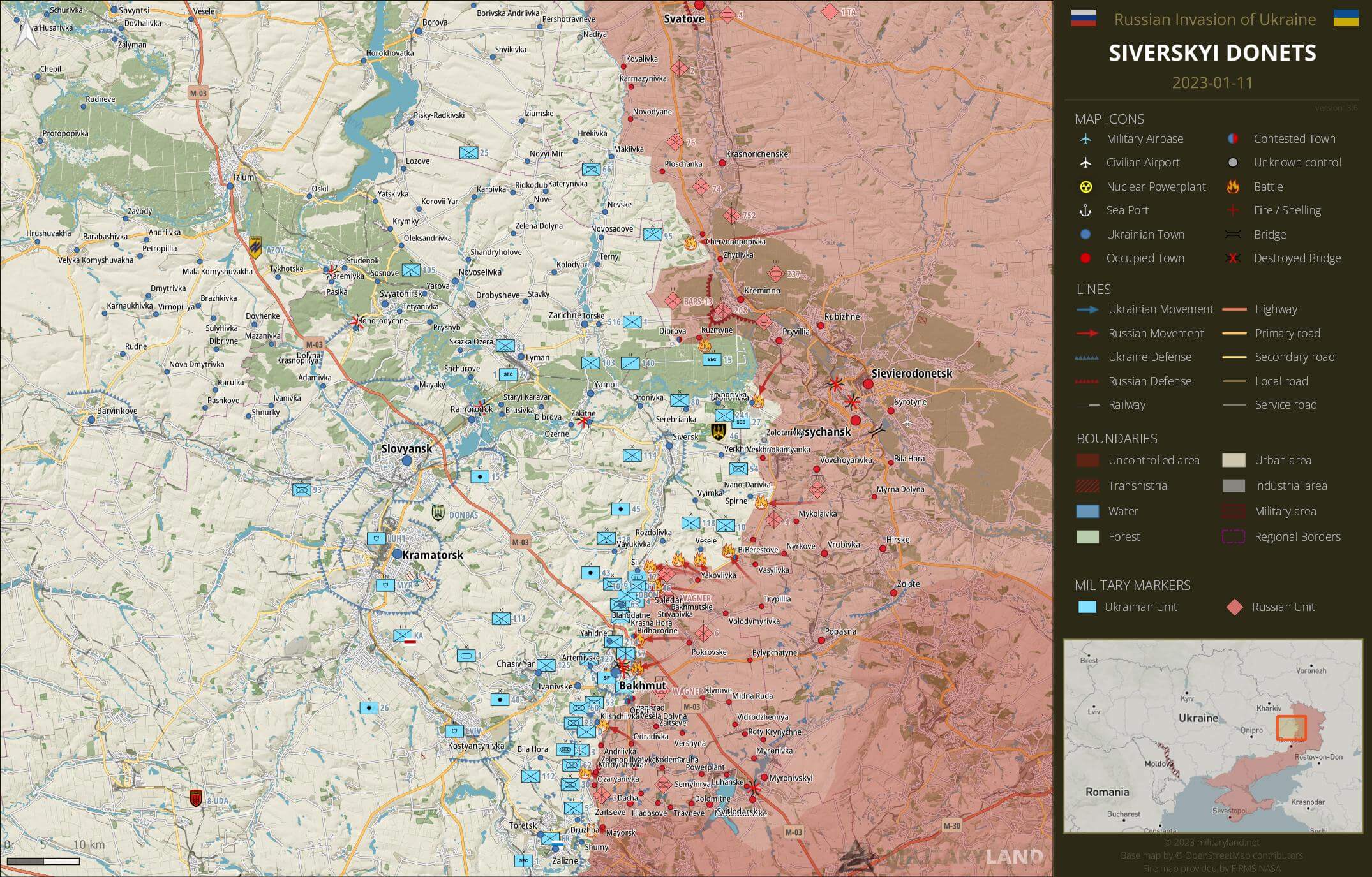 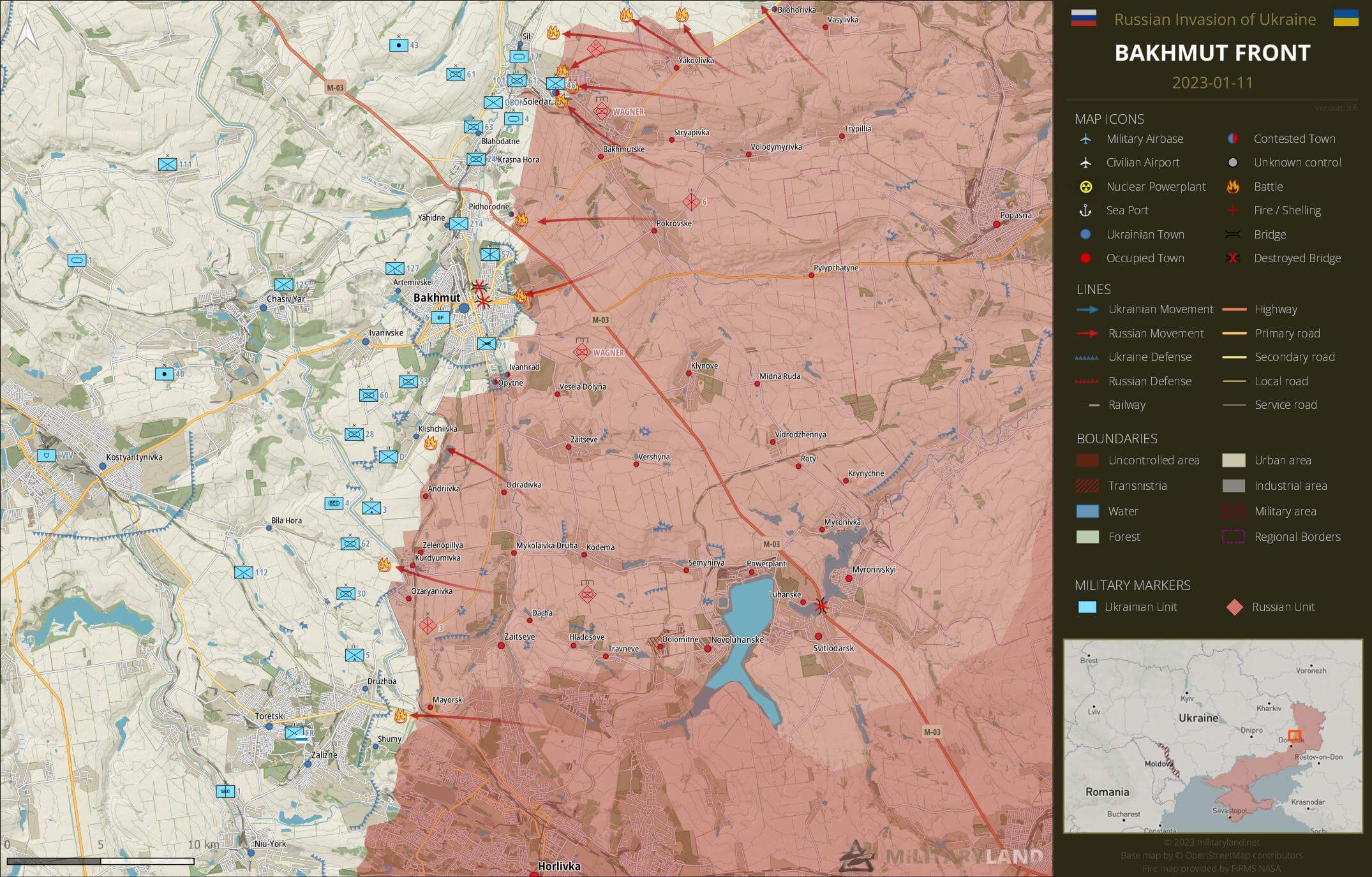 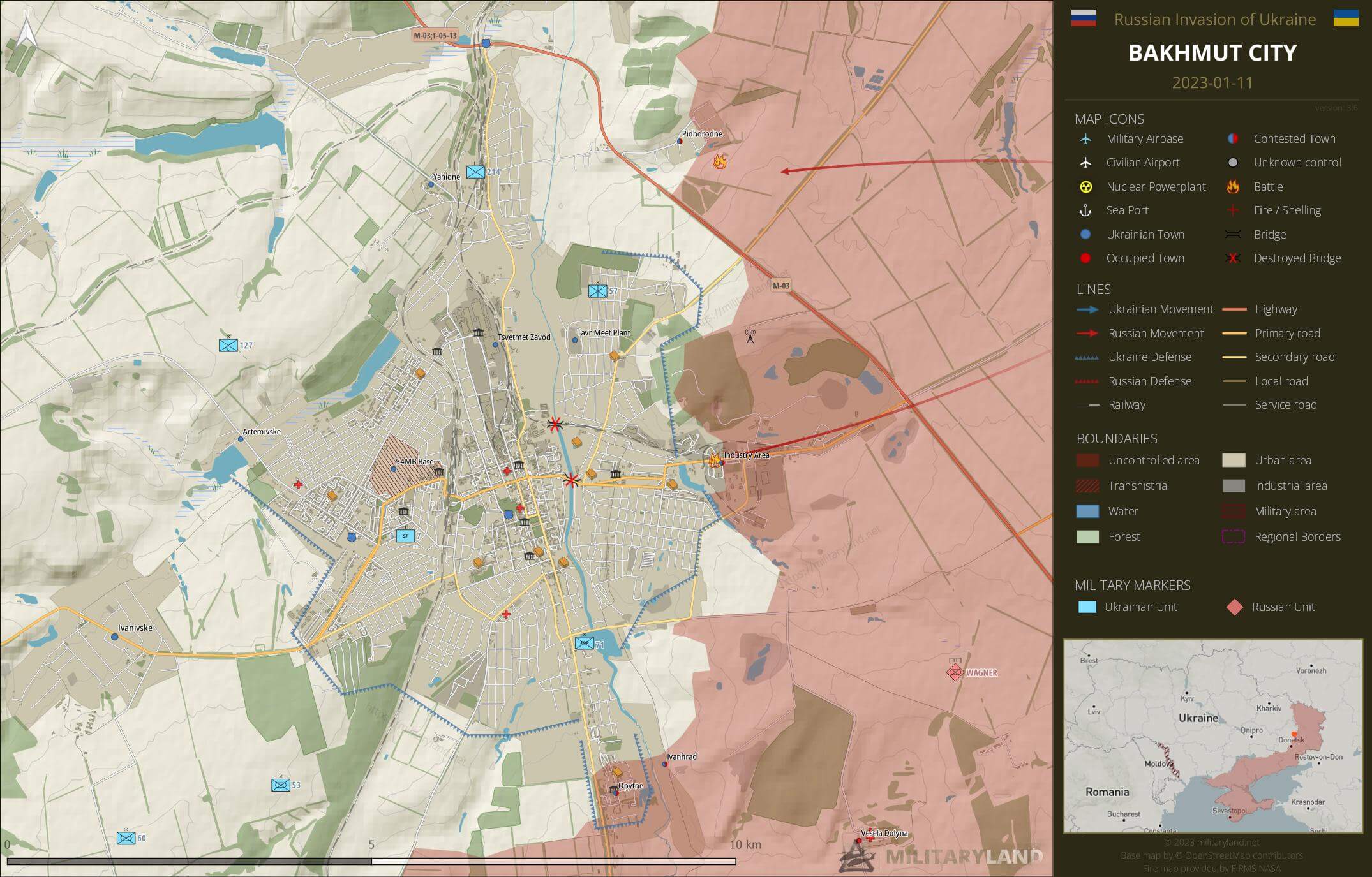 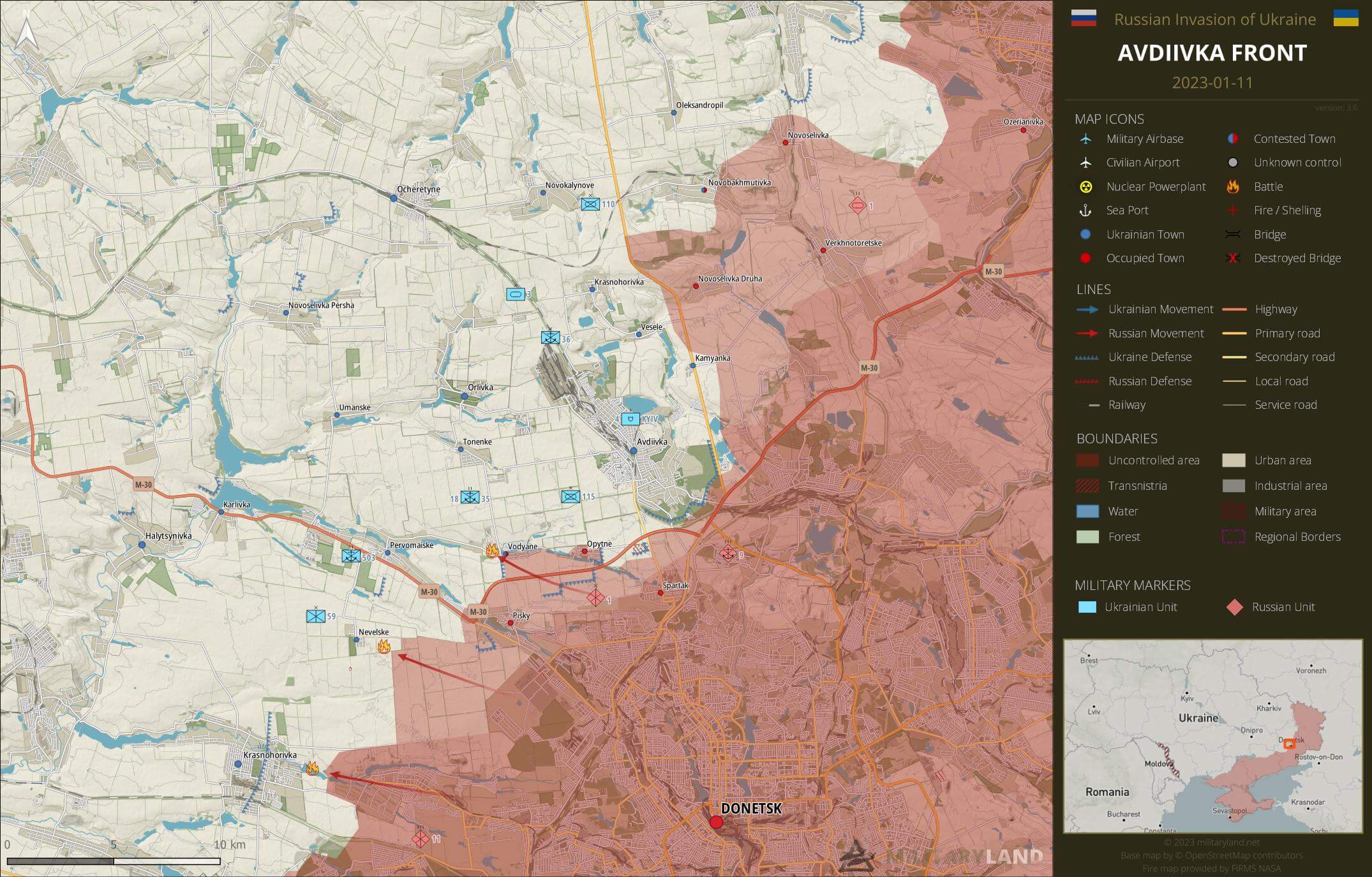 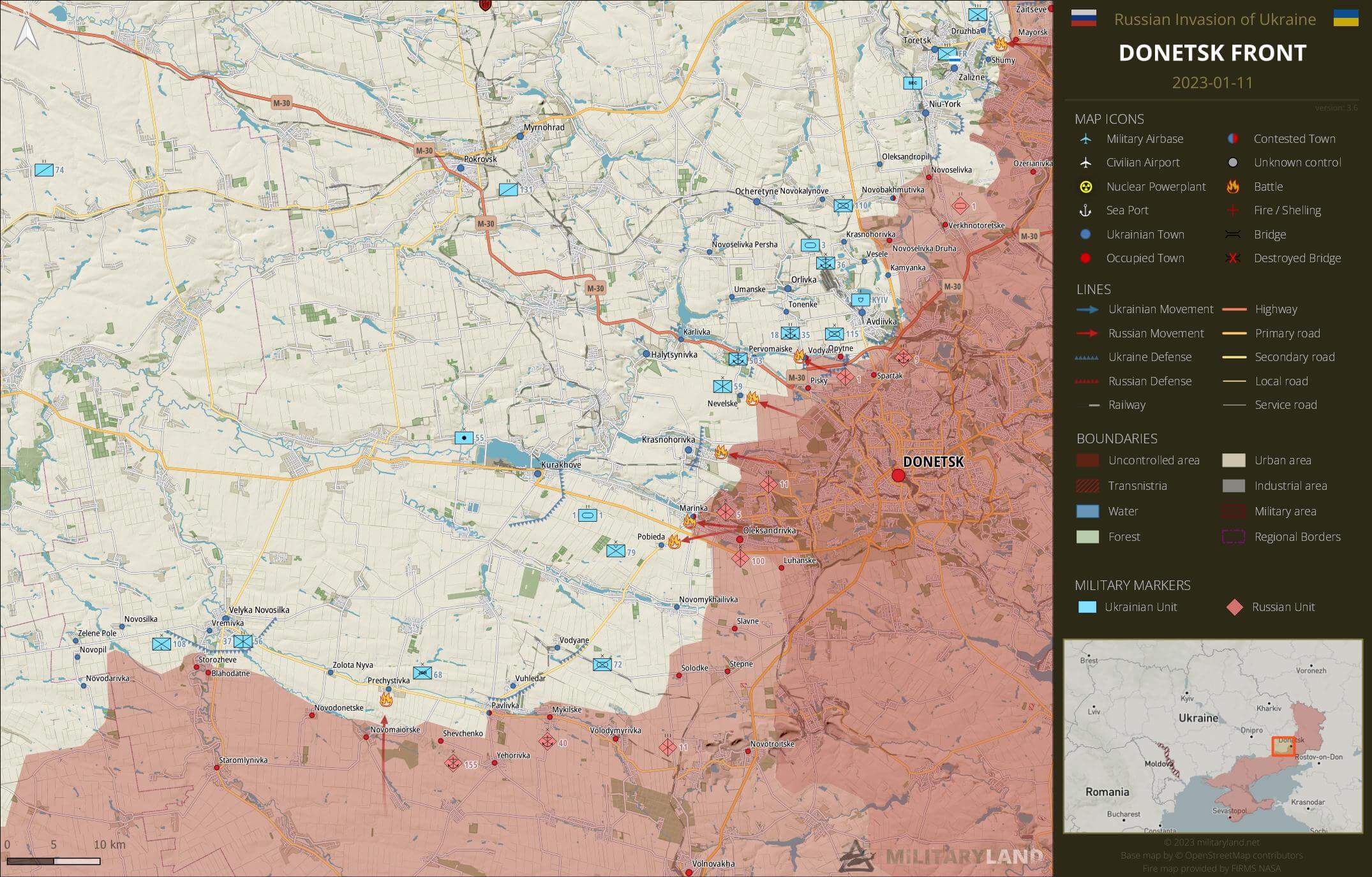 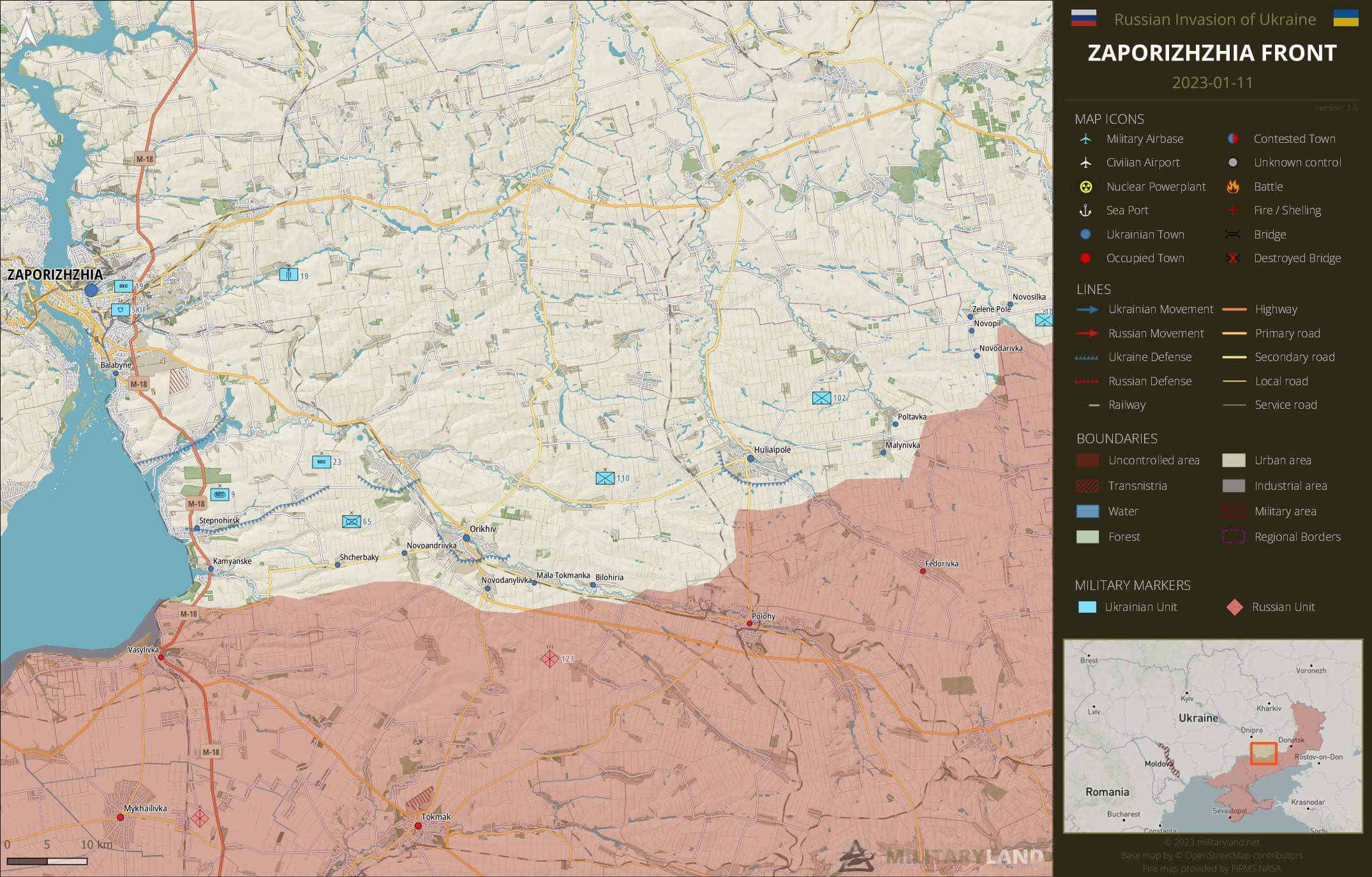 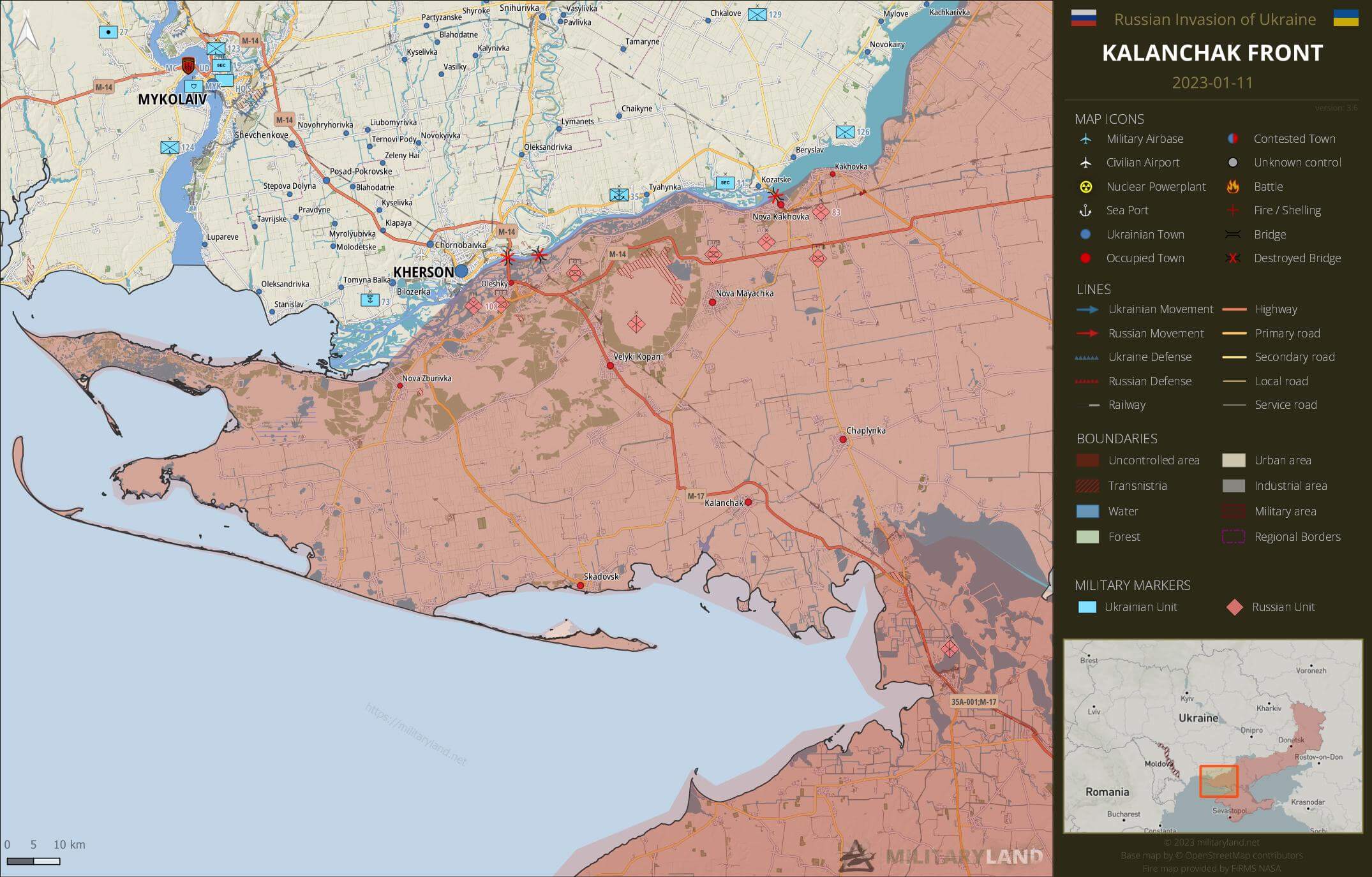 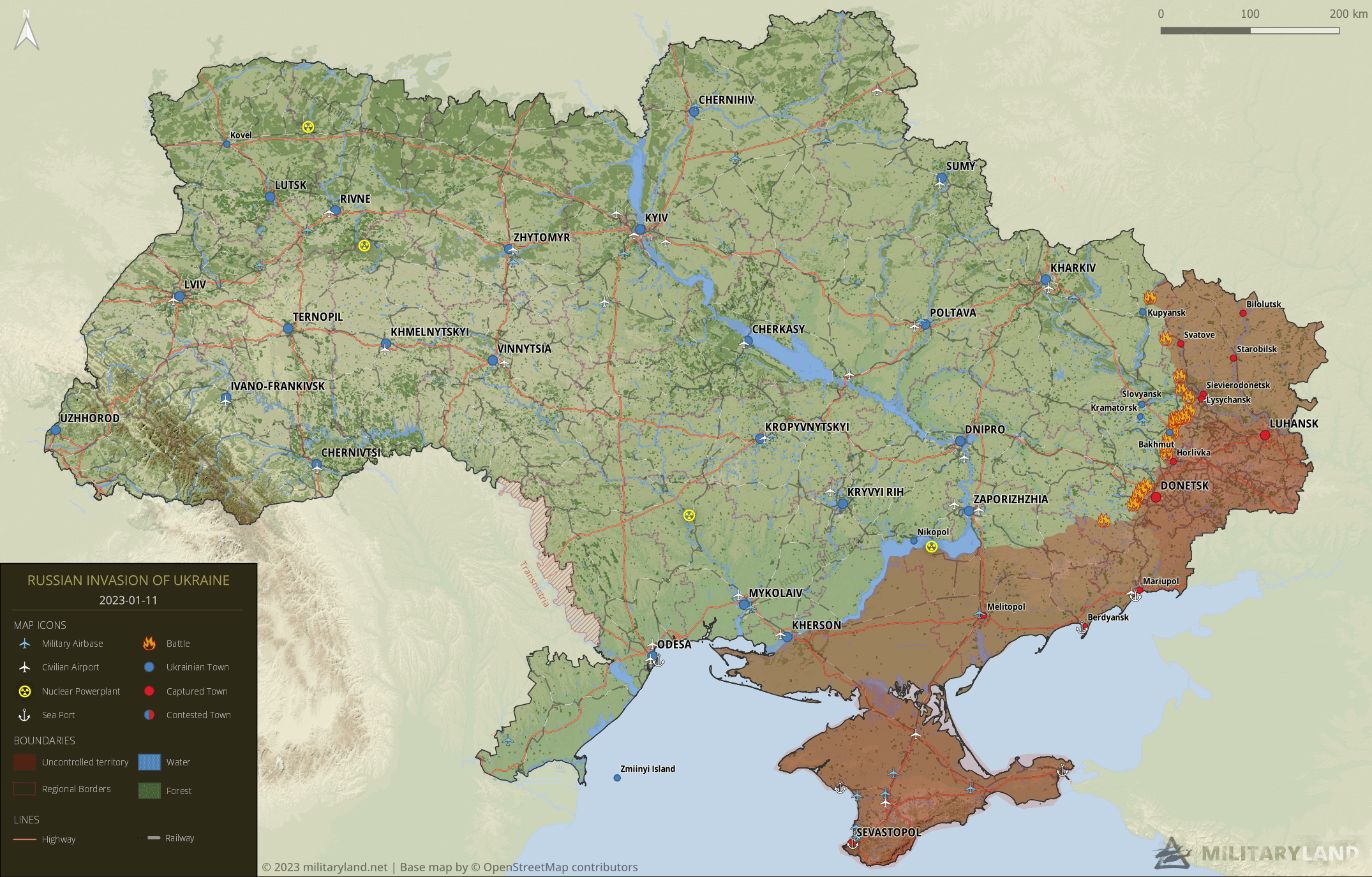 Hey, new to this page and its really good, i love the updates.
I was wondering whether you have any idea from the casualty rates in the Bakhmut area? And Ukraine in gerneral, because some sources say that both sides are both sides are suffering heavy casualties, some say Ukraine is descimating Russia all over Ukraine. And some say that there are attrition rates of 8:1 in Bakhm in favour of RU

Im more inclined to believe the, biths ides taling massive casualties narrative, due to the fog of war and it just seem the most logical and likely.
Very few people say that Ukraine is suffering an 8:1 attrition rate in Bakhmut and 10:4 or 5:1 ( i forget which one it is) all over Ukraine in favour of RU.
But i just wanna know what you guys think?

There is fog of war, so yes it is difficult to have a good idea of the casualties. But logically, the ratio is in favor of Ukraine (Ukrainians are in defense). There are photos of fields with dozens of dead russians; no comparable proof of casualties for the ukrainians. So your 8:1 ratio in favor of RU is completely wrong. Ukraine is winning.

Logically Russia has a firepower advantage of artillery like what? 7 to 1 Ukraine said I think. So It is stupid to say that Russia suffers more losses then Ukraine.
Doesn’t matter that they are defending, they are defending whilst being bombare constantly, whilst Russia only pushes once in a while. Fog of war rules right now, but Russia is definitely not suffering more losses

Not anymore. Since July, russian artillery firepower is drastically reduced because their logistics (and the HIMAR threat) does not allow the kind of firepower they had in April-May-June. And even at that time, Russian had more losses than Ukrainians.

The most fravorable (for russia) casualties estimates are:

i think early november general milley, chief of staff usa, talked about well above 100k casualties for Russia and about the same for Ukraine. It is highly likely that this woiuld have changed in favour of ukraine the last 2 months.

The situation hasn’t drastically changed the last 2 months. Russian may suffer more casualties now because the conscripts are more likely to die and the “suicide waves” tactics employed by Wagner, but that’s not my point.

Gen. Milley’s sentence is well known, but we don’t know how he figured out that number. To have a better estimate, you have to look at the whole picturelike in this article.

So, you know better than Gen Milley? Amazing…

Gen Milley can be wrong, or lie, or simplify (100 000 is the right order of magnitude), it doesn’t change the fact that russians military have way more casualties than ukrainians. They have more material losses, they attack fortified positions directly, so yeah, obviously they have more casualties. The only unknown is “how many times more” ? 2 times ? 3 times ? More ?

Check that big group of 4 encircled on the photo, check the guy on the east of that group of 4, now check the helmet. yha those bodies are probably of ukrainians. Being in defense is terrible if the opponent has high observation points uav coverage and a 10 to one artillery superiority. ukraine has to send in troops to positions to hold the place, whilst wagner just harasses a little

The end of Sergej Surowikin may mark the end of the strategic bombing of the energy infrastructur. At least that will have to slow down soon anyways… but it may mean that it is actually over.

The strategic bombing of the energy infrastructur has become increasingly ineffective anyway and already slowed down before.

I think the main reason is that the number of Russian cruise missiles has dropped considerably. My theory: it always took Russia a week to assemble cruise missiles from other parts of the country, which were meant for defence, to launch a large enough wave, so at least some missiles wouldn’t be intercepted. I think this is the first time Russia actually ran out of a type of munition

while he is writing nonsense (‘concerned trolling’?) there is some merit – most of these dead on RU side are no-people. So if RU loses wagnerites by thousands and Ukr it’s own soldiers by hundreds or dozens it’s not a ‘good trade’ really.
People sometimes asks ‘when Russians will feel the loses’, particularly ‘normal Russians’. Well, the ghastly answer is – ‘start around 1 mln.’

You indicated that the 6th battalion of the 7th SOF center is located in Bakhmut, but they were also transformed into the 67th mechanized brigade?

503 Marine Battalion, which is located near Donetsk, is part of 36 Marine Brigade, indicate this pls

36th only contains 1stBtn and 501Btn. You can click the ‘Ukrainian Navy’ to watch it.

How easy will it be to put bakhmut under a siege now that soledar has fallen? And when do you think bakhmut will fall?

If the Russians unlock the southern gate to Bakhmut by capturing Opytne and Klishiivka the countdown will start, as they will be able to advance to Ivaniske and attack from the west in addition to the east, south and north. Without these two settlements, they will hardly manage to take Bakhmut.

If you look at the map, you can see that Soledar itself doesn’t play too much of a role for Bakhmut. It depends more on the situation in Krasna Hora and south of there whether the Russians can put pressure on Bakhmut from the north side. If the Ukrainians can hold the highway so the Russians can’t cross over from the eastern parts of Pidhorodne, then the situation doesn’t really change much.

but how about the causualties? Bakhmut is in a depression, lower than Pidhorodne and industry area which were captured by Wagner. Howetzer can easy attack them.

They would need bypass (or take the the fortification behind) the Kishchiivka 1st. Assuming the worst, namely: that the RU will be able to keep momentum and sucessfully disrupt Ukr movement in the area, they might get the control of the northern supply line for Bakhmut (M-03). That would put the Siversk detachments in the uncomfortable position and – if they would push North – –>

Ukrainian bloggers, who are normally pretty biased in favor of Ukraine are saying now that UAF withdrew from Soledar and that the Russians have captured around 100 prisioners. Arestovych says that there are many Ukrainian deserters who have simply abandoned their units. I have no idea where this information is coming from. Is there any evidence for all that?

The fog of war dominates… The only certainty is that the Russians have advanced but that Soledar is not fully under their control. There are probably prisoners and deserters but how many exactly? Some Russian sources claim Ukraine is preparing a counter-attack (allegedly ordered by Zelensky personally). God knows…

For the troops on both sides conditions are horrendous. Troops have been found frozen to death, many probably suffering ptsd (shell shock) cold, hungry and wet. Facing death everyday, scared.
It must get to a point when the human brain/mind can just take no more.
Wars are over when troops no longer want to or have no will to fight anymore.

It is said that the Russian army disguised as the Ukrainian army attacked the front line. Is this true?

Yes, there’s a video. Wagner men dressed in Ukrainian Army uniforms with the colored armbands, walked up to a UKR position, then executed the Ukrainians troops.

Yes, Wagner did this. It’s a war crime.

your ‘usual day in Russia’. Get used to that.

the whole video is available and just shows that they arnt wearing Ukrainian markers, it relates to the rumors started by the fans of the tictok guy who got shot. they all were under Ukrainian fire in a hole, rounds wising by he stood up and the other guy didnt want to let go of the gun. both looked drugged or shell shocked, perhaps both. the russian soldier risked his life trying capture them.

Question for the insiders here:
1. what is this tunnel system in Soledar that some media are talking about? Is it strategically important?
In my opinion, one should actually avoid tunnel systems in order not to be trapped by them.

2. is it true that in two months Prigozhin will have no money to finance his army and its equipment? Surely he will not get anything from Russlad, because they themselves have almost nothing left?

What? Russia has about 18 months of foreign currency reserves left.

In wartime all nations can find ways to find money to fight the war.
UK and empire were totally bankrupt at the end of ww2.
Usa bailed them out. Loanns wete not paid off until about 2010 or so.

Russia will not have any reservs left within this year, i guess in the first half of it.

(2) no. For the same reason that no matter how many N. Koreans will die from hunger, Kim will always get the newest XBox.
On YT, if you are interested you may find quite good insight in the internal RUssian dynamics made by person who actually (unlike many ‘experts’ knows the issue and the language) – check Vlad Vexler’s channels.

No idea what the strategic importance is. But they look really cool.

Tunnels are so huge you can have tank races. But more seriously, they are very convenient to store material/equipment and hide from bombing. Trouble is when the enemy is waiting for you outside…

Damp salt air will ruin equipment if stored for long.

Equipment, machines and people should not be stored in tunnel systems. With targeted missile attacks, you can collapse the entrances and then everything is locked up.

Such tunnels are good for getting from A to B quickly and undetected, but not for being trapped inside.

There is a reason, however, why Ukraine didn’t use it to store equipment extensively.