Due to the Russian advance in the area of Soledar, we’re releasing an extra summary solely focused on the Bakhmut Front. The classic summaries remain bi-daily. 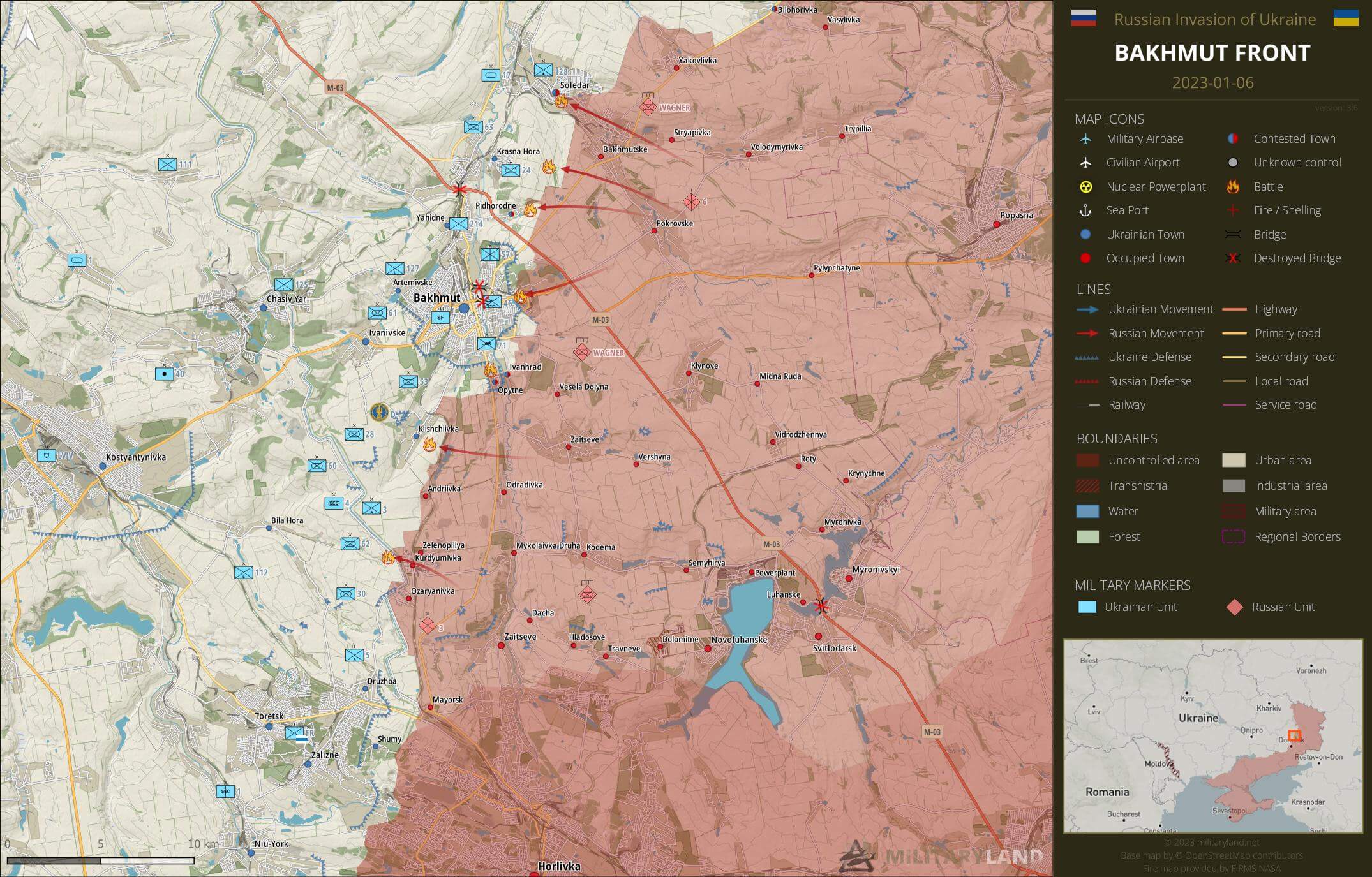 No, it shows Russia is able to withstand the war of attrition for much longer than many thought. The advance near Soledar isn’t sudden, but the result of months of long pressure.

Some say that ukrainians willingly let russians advance so that they keep degrading their offensive capabilities by attacking,wave after wave, Bakhmut and its surroundings

According to recent video material it seems that Ukrainian forces have pushed the Russians out of the salt mine and even recaptured big part of Soledar.

really? can you give a source perhaps?

If you really believe this, you’re in for a big disappointment…

well, Russian turbo-patriots seems to be disappointed badly. Advertised gains shrinked significantly (according to @Rybar citing Военная хроника).
It does looks like the preplanned retreat from flanked position (old frontline would be unteneable in such circumstances) than ‘breakthrough’.
Instead of ‘pushing out of salt mine’ I rather believe they never actually have been in it.

It’s probably true the Russians had not reached the salt mine. The fake “push out” proves Ukraine has nothing to boast about in Soledar.

According to Boris Rozhin, Wagner captured the town of Pidhorodne on the outskirts of Bakhmut.

that was +- 3 days ago. It’s kind of unclear if they ‘took’ the settlement or just went into abandoned.

So @Militarylandnet
can you give a guess as to how many have been KIA and WIA on both sides during the Bahkmut battle?

Nobody knows for sure, but it seems safe to say thousands KIA and WIA on both sides.

not an easy thing to answer tbh.
but given that ukraine has 60k worth of battalions in that region, i would assume that those numbers aren’t low.
despite what many people say that this city is basically worthless, it does seem like that ukraine is ready to sacrifice a lot for it, even more than for lysychansk.

deepstatemap reports (and they usually are pretty conservative) that, indeed, RU forces were convinced to vacate of the train station area in Soledar.

Seems that they still have these little heights on the North and on the South of the town the situation is unpleasant – it’s a bad terrain to defend.

Many thanks, that’s only 2 km south of Krasnopolivka.

Thanks for the welcome initiative, Jerome. Brilliant work as always.

Jerome, is there any indication that the VDV units in the area have entered combat or is that just rumor?

How many square kilometers per week/month do Russians gain? This is a local attack towards Bahmut since the seventh month!
Regards.

Yes, Russian gains have so far been unimpressive at best.

No, the winter offensive will be much wider in scale. As for effectiveness and results, we will see. And both sides will conduct such offensives for sure.

They do not have forces for the ‘offensive’. Even with next 500k which they probably draft in the next months or so it will be problematic.

Local zerg rushes of convicts ’till Ukr will have ammo crisis and troop rotation and then pushing by the rest of the VDVs they still have – yep. That should be expected.

Before drafting 500k (if they do) it will be interesting to see what they do with the 300k already drafted and trained. It is perhaps not enough for a country-wide offensive but is a very decent force for a regional one.

We don’t even know if they managed to draft 300k. They said they did – but it’s usually safe to assume that the Russian government is lying.

until you see renewed ‘battle tik-toks’ from Chechen’s Clown Special Forces, do not expect much.