The vicinity of Bakhmut remains the hottest point, but Russian forces are unable to gain a momentum here, or anywhere else.

Snow covered most parts of Ukraine, turned fields and dirt roads into a mud, which denies any larger military operation. 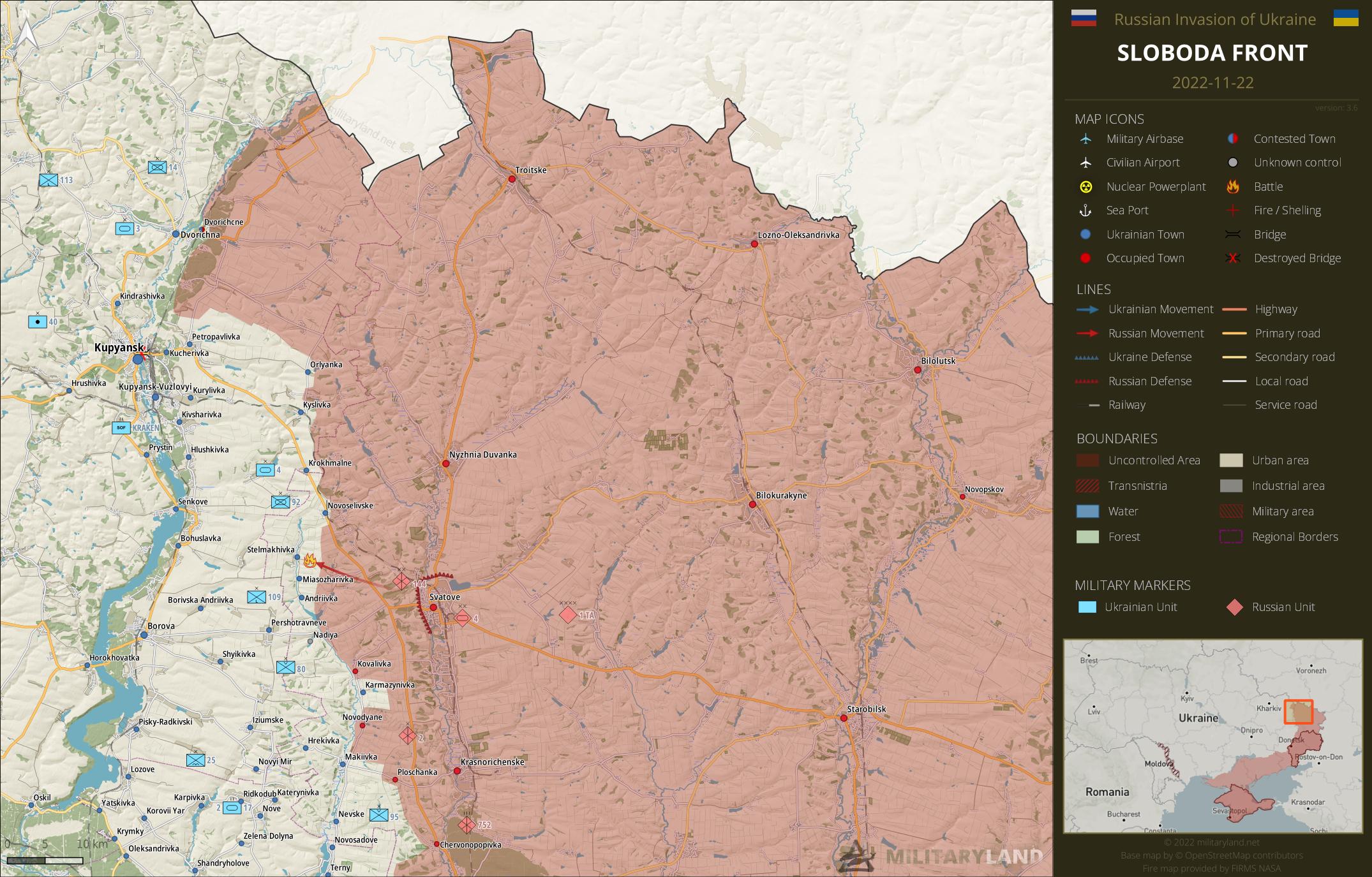 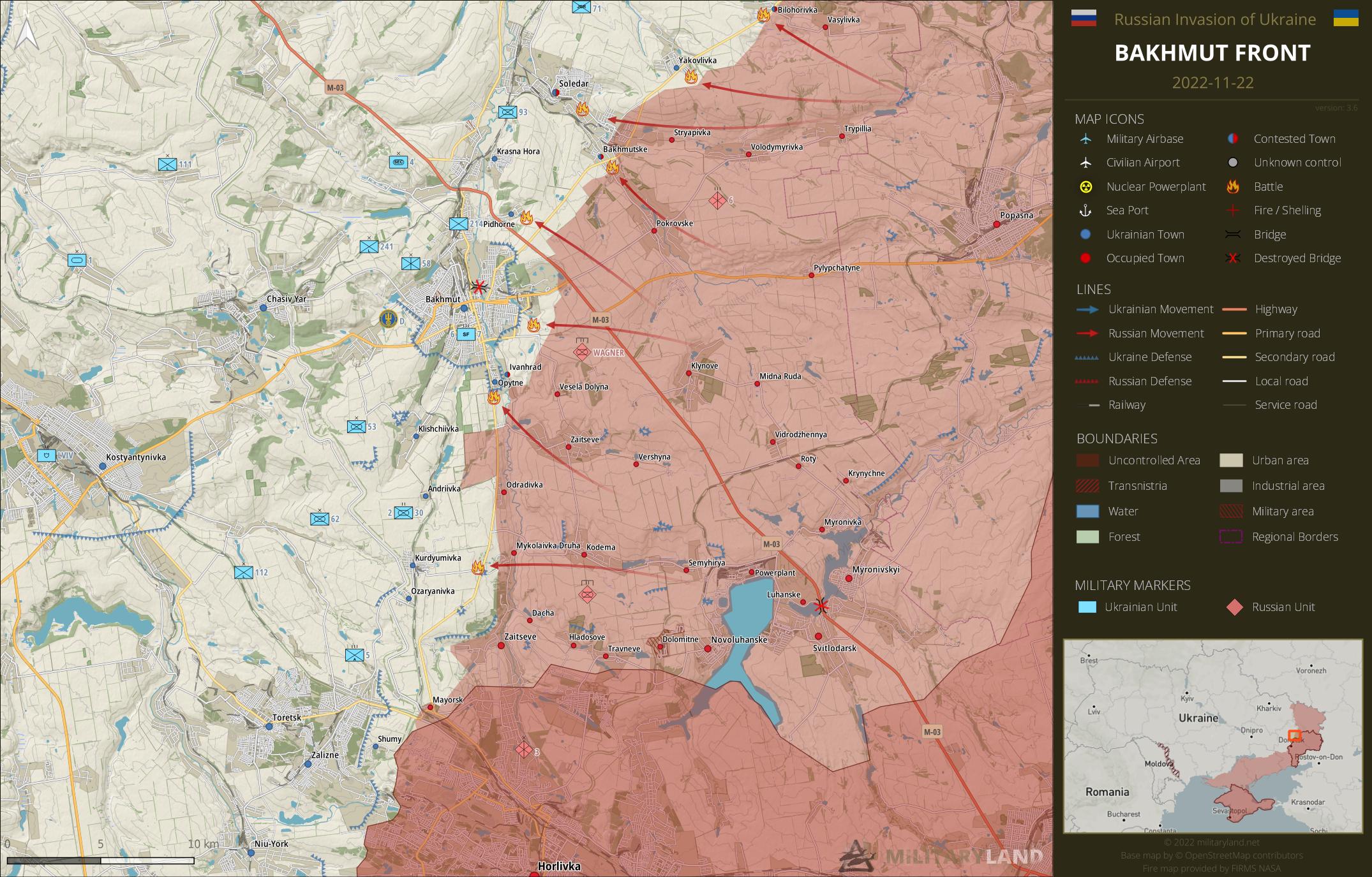 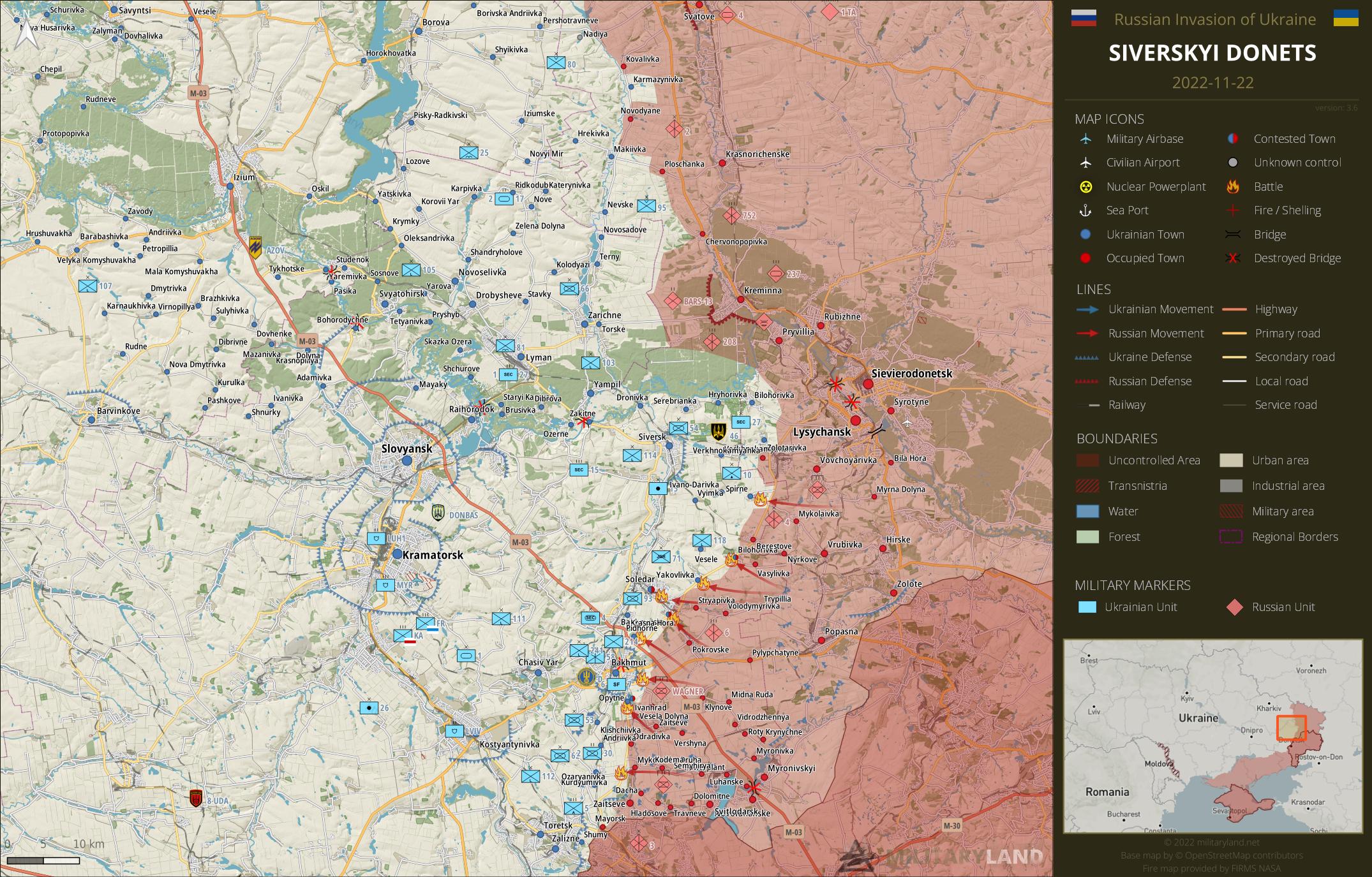 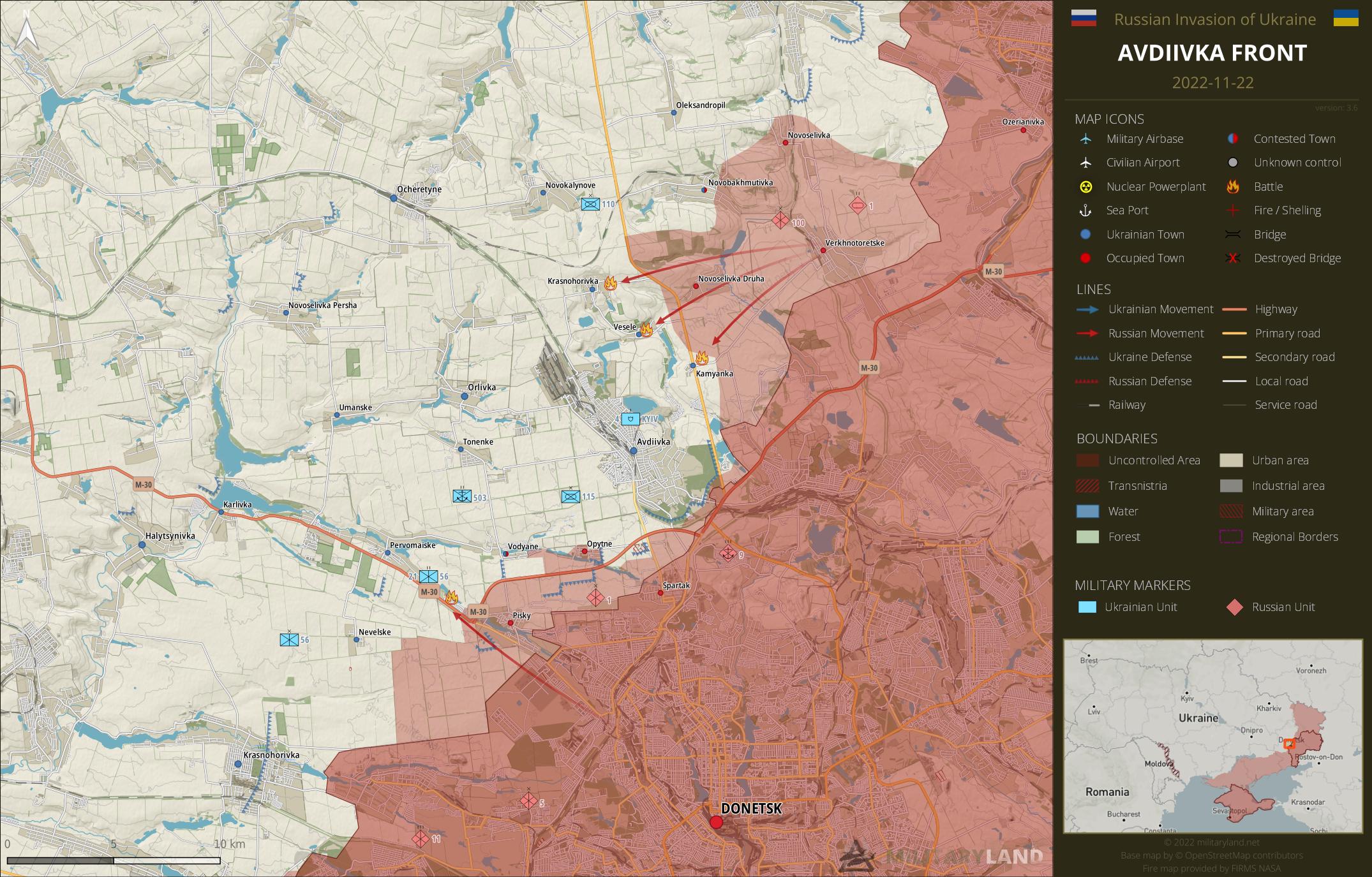 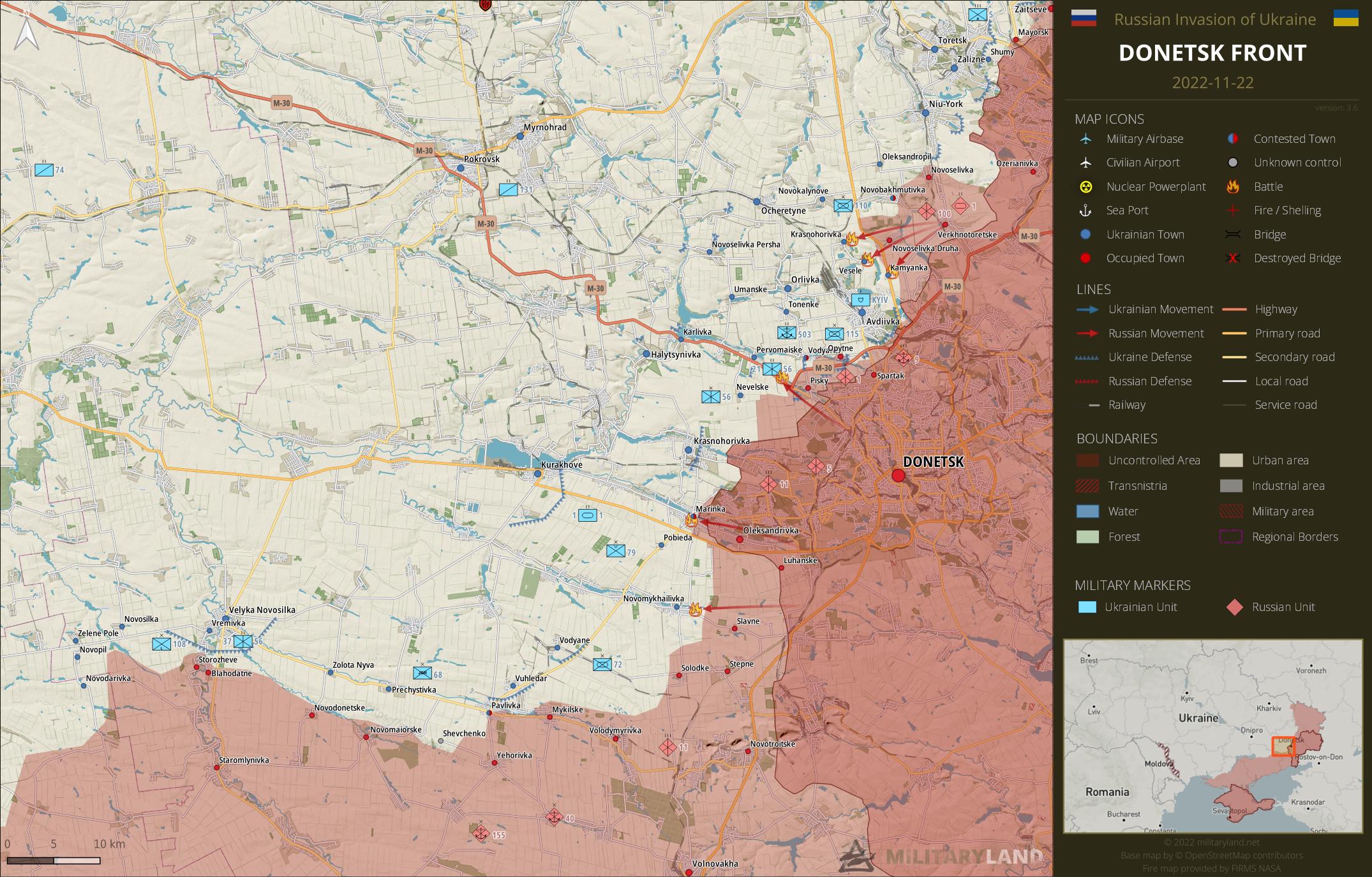 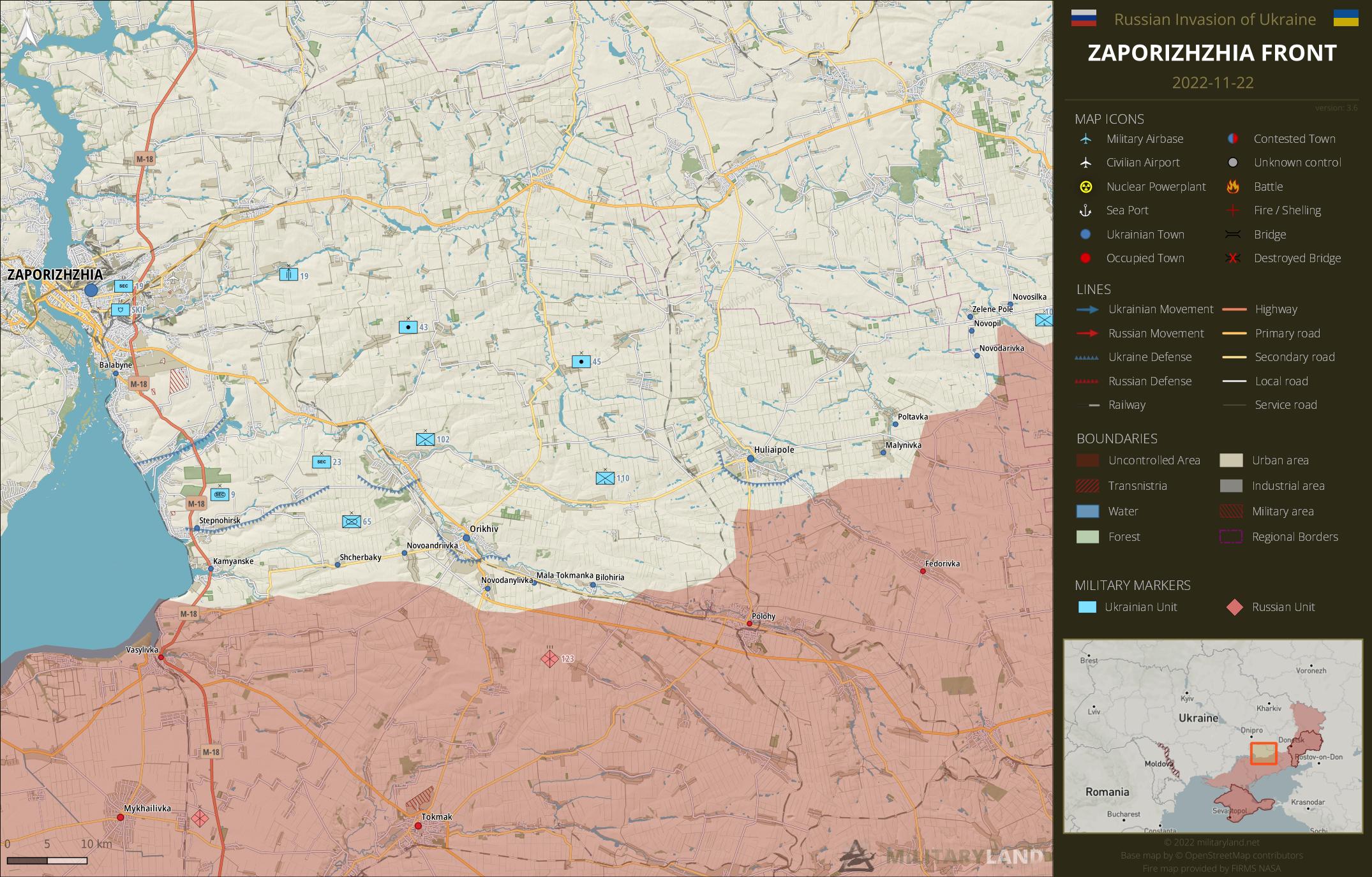 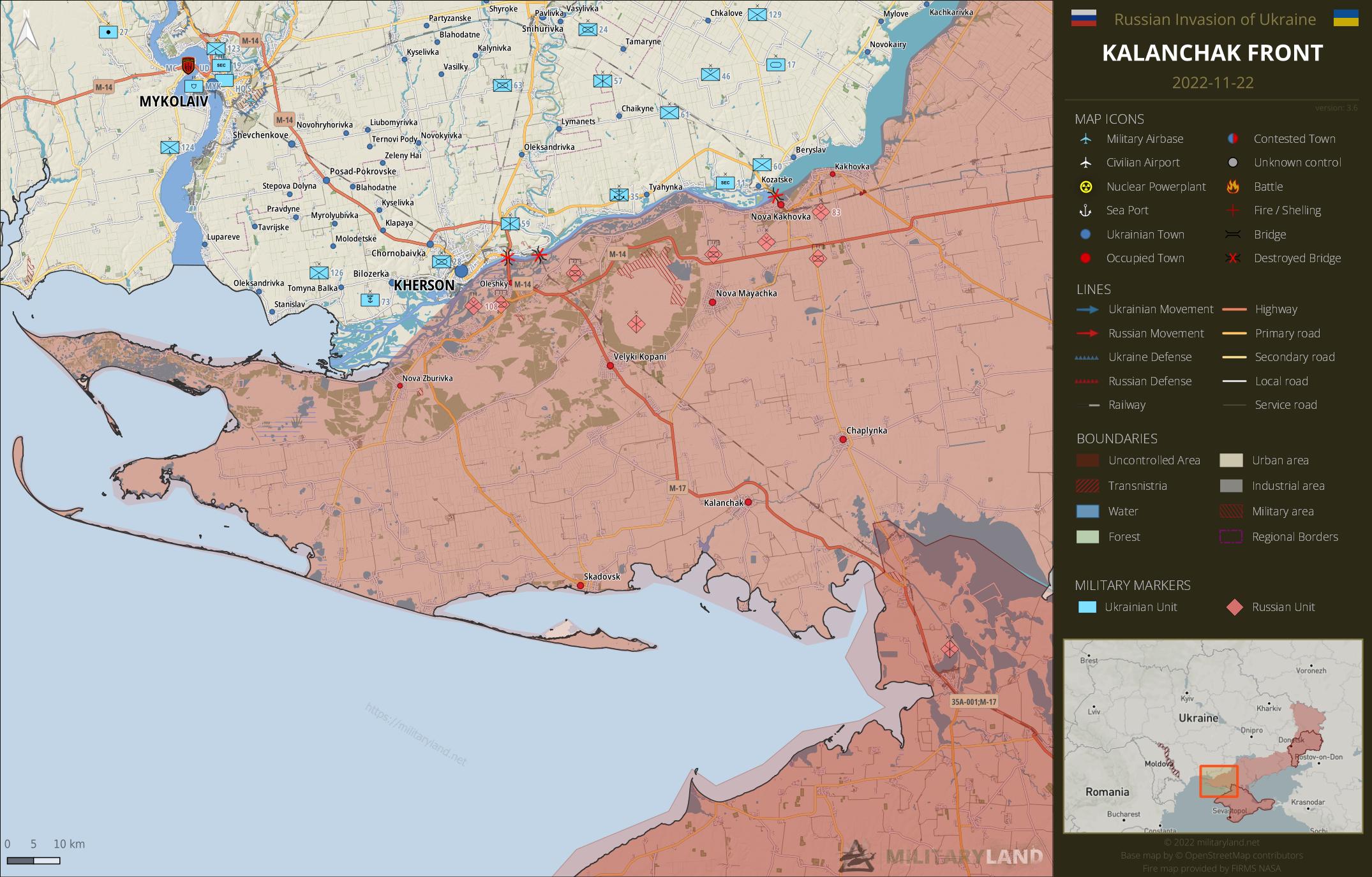 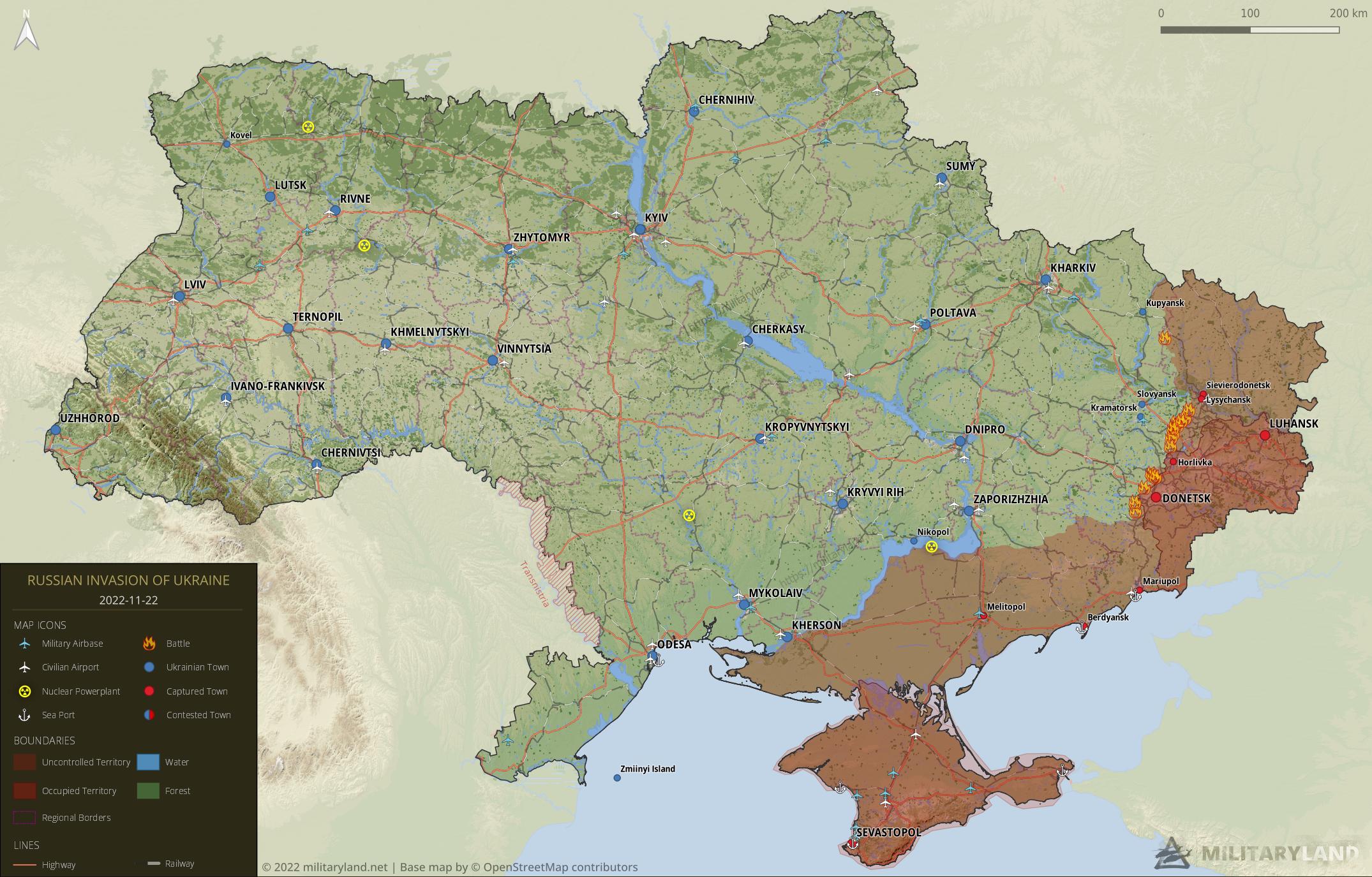 Although they are, to date, inexperienced and ill-equipped, the Russian mobilized troops who will join the front in the coming weeks will pose a significant problem to Ukraine. Coupled with the harshness of winter, for the military but perhaps most of all for the civilian population victim of missile strikes, this heralds difficult times for Ukraine in the weeks to come.

I think the priority of the allied forces should be to supply Ukraine with even more missile systems (especially long-range ATACMS) to inflict maximum damage on the Russian mobilised troops, ammo for air defence and anti-drone electrical jamming systems and with electrical generators to save the general population and economy

Russia has also shortened the front considerably. But the harshness of winter will play into Ukraines military hands, they are better equiped for it. We will see when Bezdorizhzhia ends.

I hope the best for Ukraine

Bezdorizhzhia, muddy season slow down.
Frozen ground will come soon in the north east though.

ruSSians how can you be so stupid and EVIL, WAKE UP and get out of Ukraine!

Does anyone have fair grasp on how many soldiers Russia has lost last 2 months, attempting to capture Bakhmut, Avdiivka, and score of villages in Donetsk?
Are we talking about – thousands, or is the number closer to, tens of thousands?

nobody could answer this question with confidence, since it’s a really hard question.
if we go by numbers from ukraine (big pinch of salt needed)
23.September 56k+ KIA
23.November 85k+ KIA
approx. 30k during the last two months
now not all are from donetsk, but the area sees the most of russian pushing, so i’ll just 3/4 it and we’ll have 22,5k KIA in this area.
(this is most likely false)

It’s definitely in the thousands.

In the area of Bakhmut, the Wagner group sent about 10k former prisonners to the front – almost everyone died.In Pavlivlka, Russian elite infantery suffured about 2k causalties in a couple of days. And that’s just the tip of the iceberg.

So the number of russian causaulties shall be in tens of thousands.

That’s quite a bit, had presumed casualties must be terrible – heard of entire units losing, 90% or even near 100%. If they have lost 20-30K in 2 month’s, quite a waste of troops — I like to compare this fruitless attempt by Russia lasting 2 months; as equivalent of Nazi German Battle of the Bulge Dec. 1944. Where Hitler wasted troops, Hitler’s Germany ought rather have used to man defenses.

Standard Russian military tactic weaken your enemy with continued attacks until he has to withdraw due to lack of ammunition or replacements. It’s how they beat Germany back in WW2 just shear numbers not that I think it will work this time.

Won’t work, Russia isn’t USSR – Stalin had the entire population of Central-Asia to throw in, explaining why it must have looked to Nazis, Stalin had inexhaustible supply – Russia hasn’t got Central-Asia any more, RU population is declining. Russia can’t actually thus any more afford that tactic, worse Ukr. has got access to a bigger arsenal. Meaning, time isn’t working with Russia – this time.

How many Ukrainian and Russian soldiers are on the front now?

Russian all include, probably no more than 500k. Really optimist number.

Ukrain more than 1M defender. Including 200k ? of police and around 400k territorial defense. But not all in fight, since july, Ukrain make rotation and some units have “free time “.

Most assess Ukr. got round 1 mn. – Ukr. commenced training conscripted and volunteer troops soon after RU launched invasion; appear have completed training round July, evidently since then active, now many even most of those have battle experience. Assessed average Ukr. troop is superior to average RU troop, better average standards of training, and equipment. RU has between 1/3 – 1/2 numbers.

He asked about the frontline. The ukrainian military may be at 1 million, but only like a third of that or even less would be combat troops. I think the usa has a 1 to 2 ratio, ukraines be be higher.

You’re using ratios for peace-time armies, when country is fighting for own existence — ratio of combat troops is certain to be whole-lot higher.

For every soldier on the front line there are at least ten in support roles.