Ukrainian Army managed to advance closer to the road connecting Svatove and Kreminna in Luhansk Oblast and continue to be successful in repelling Russian attacks across the front.

Russian forces have shifted its primary focus to Avdiivka, with the goal to encircle Ukrainian troops stationed in the town. However, as Ukrainian defense is holding very well and there are many fortified positions in the area, Russians are unlikely to achieve this goal.

Russian army also probed Ukrainian defense north of Kharkiv, in the vicinity of Zelene settlement. The defenders repelled the attempt. 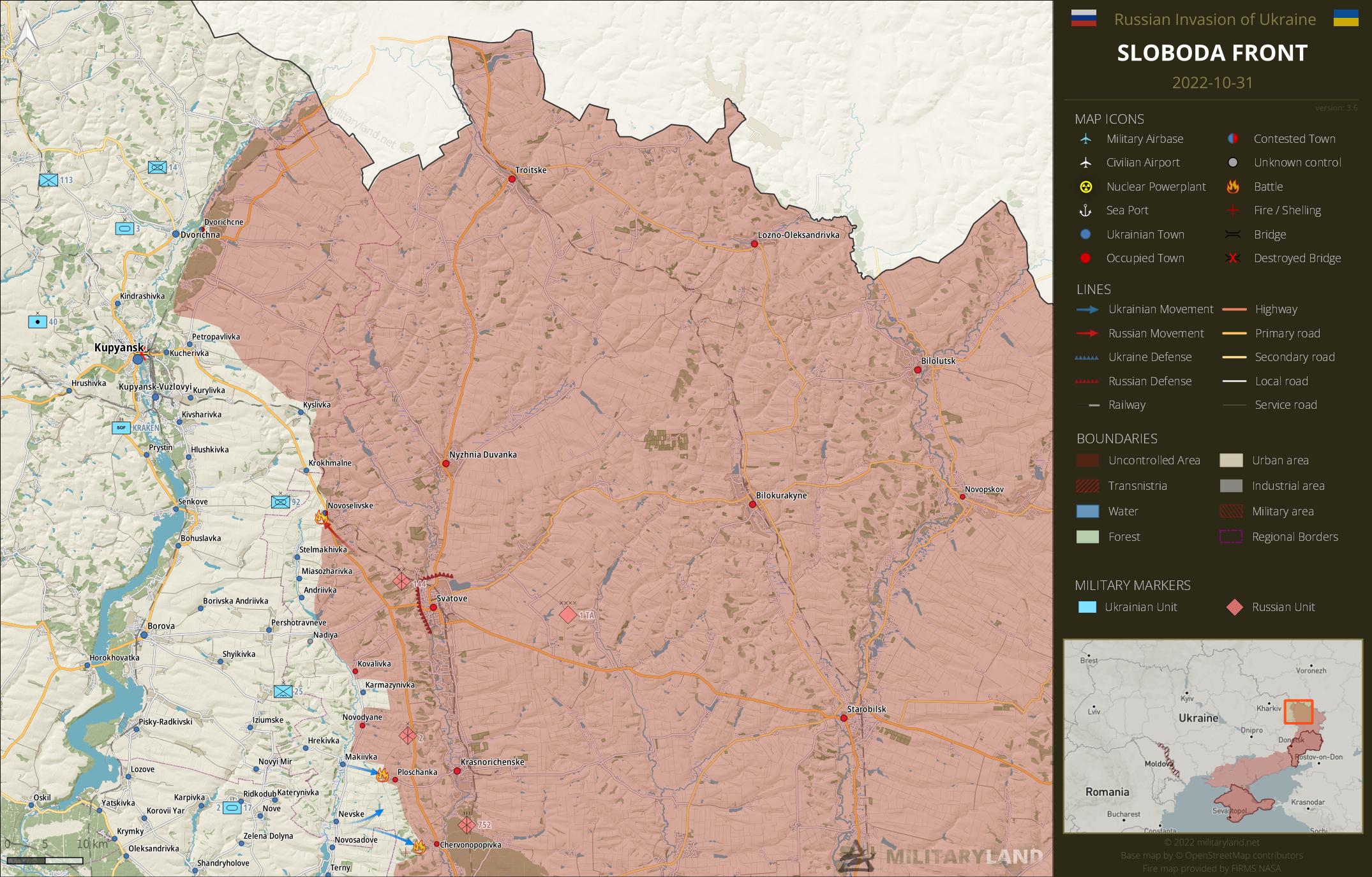 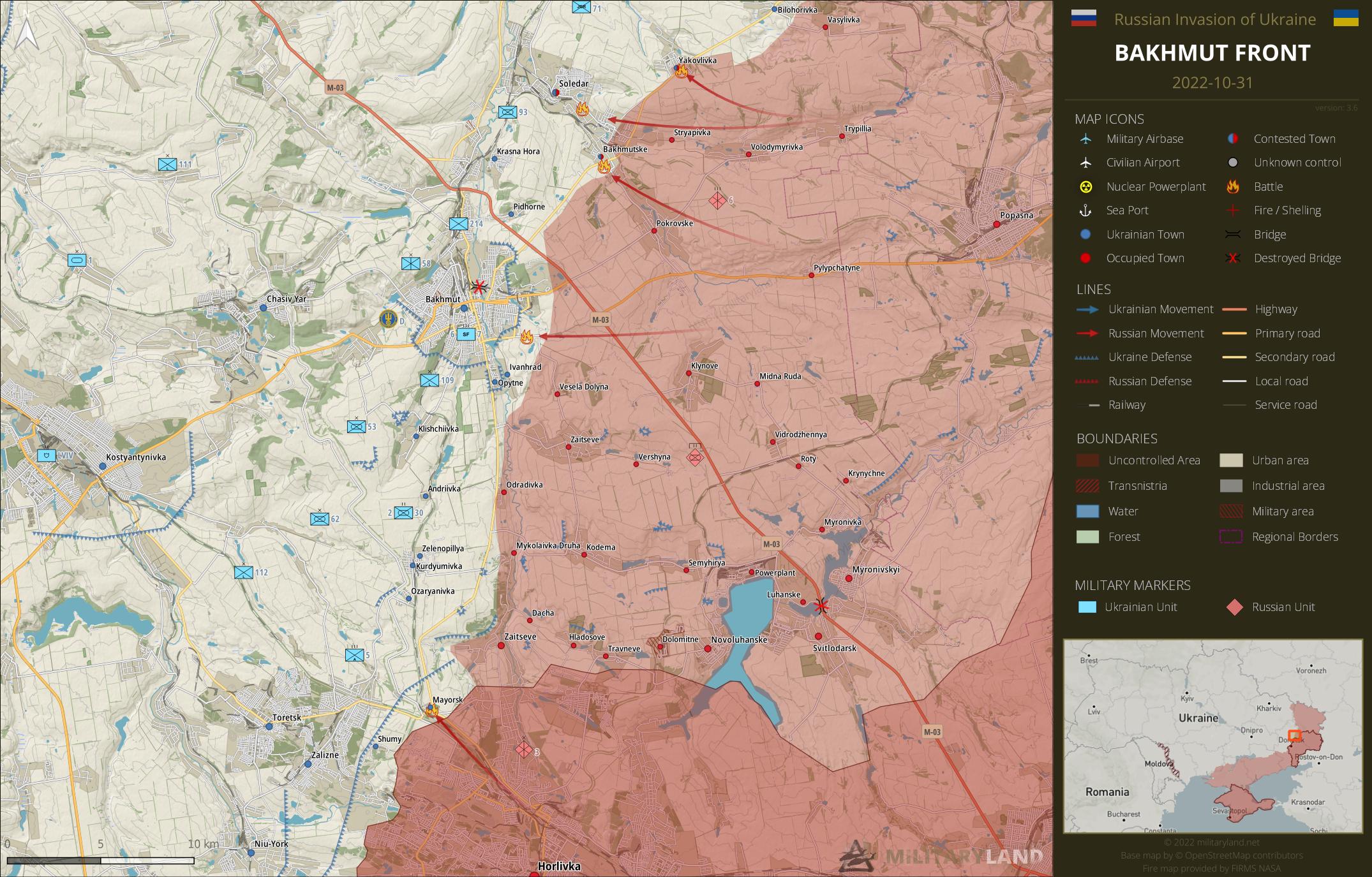 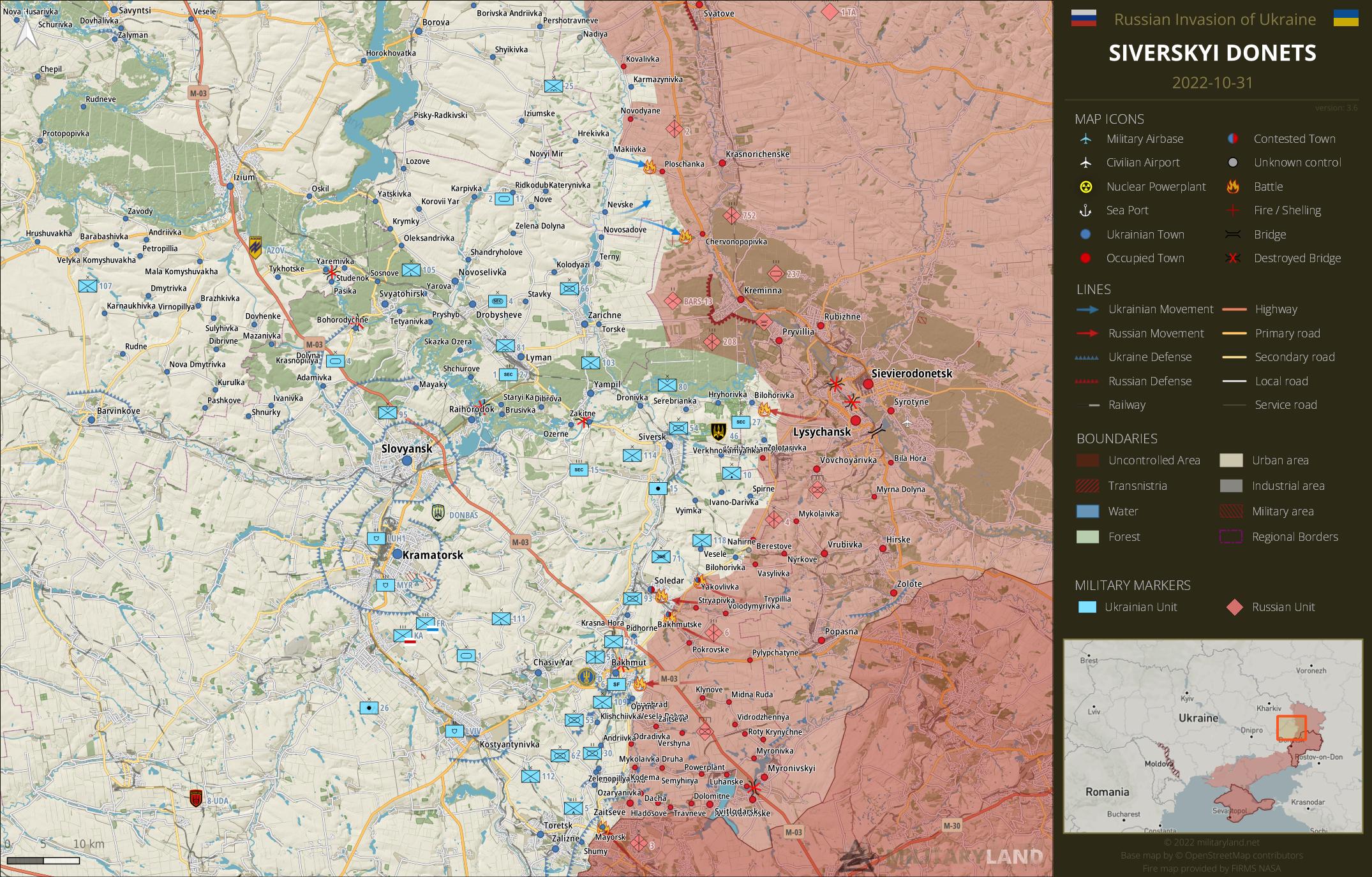 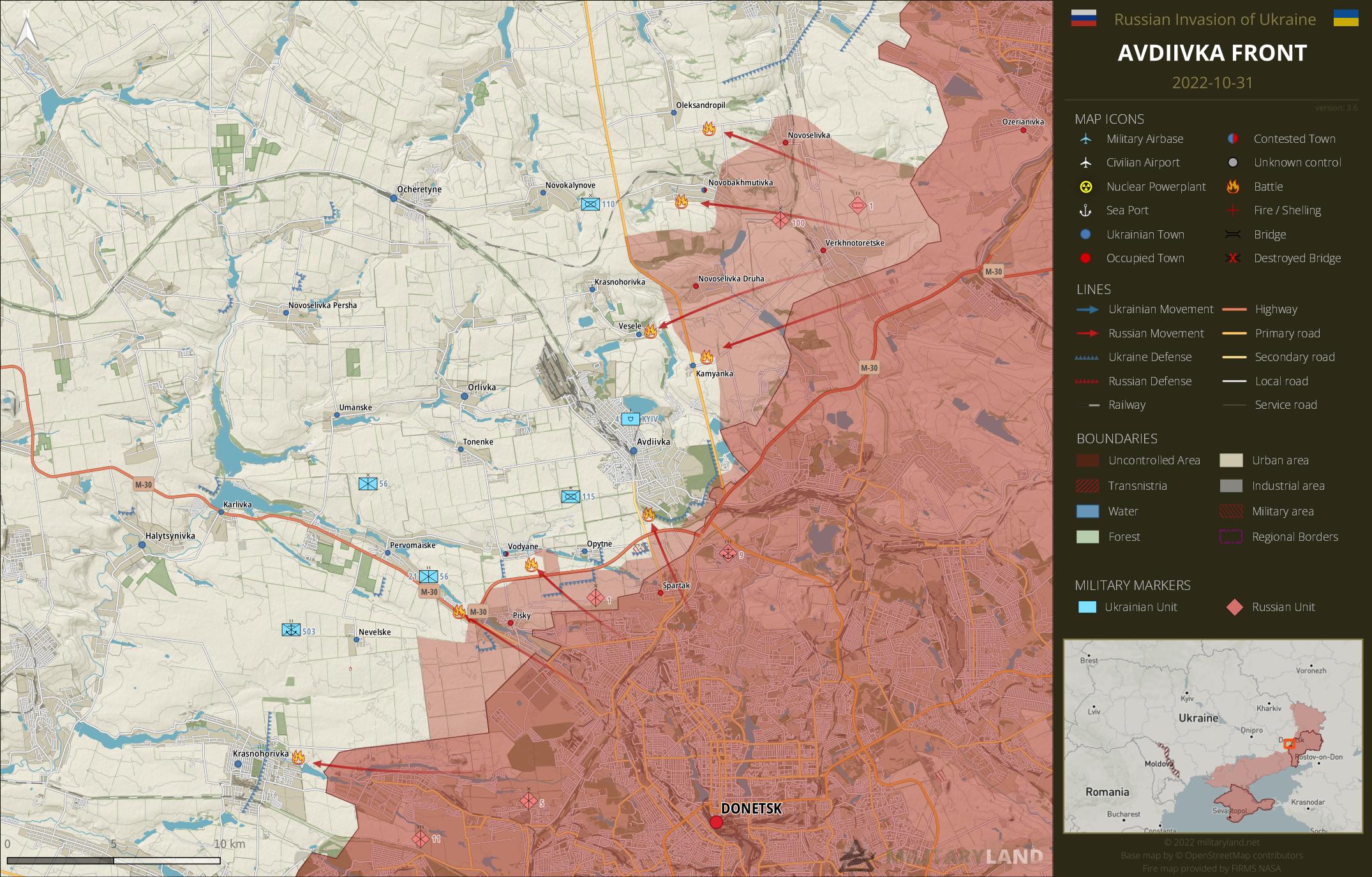 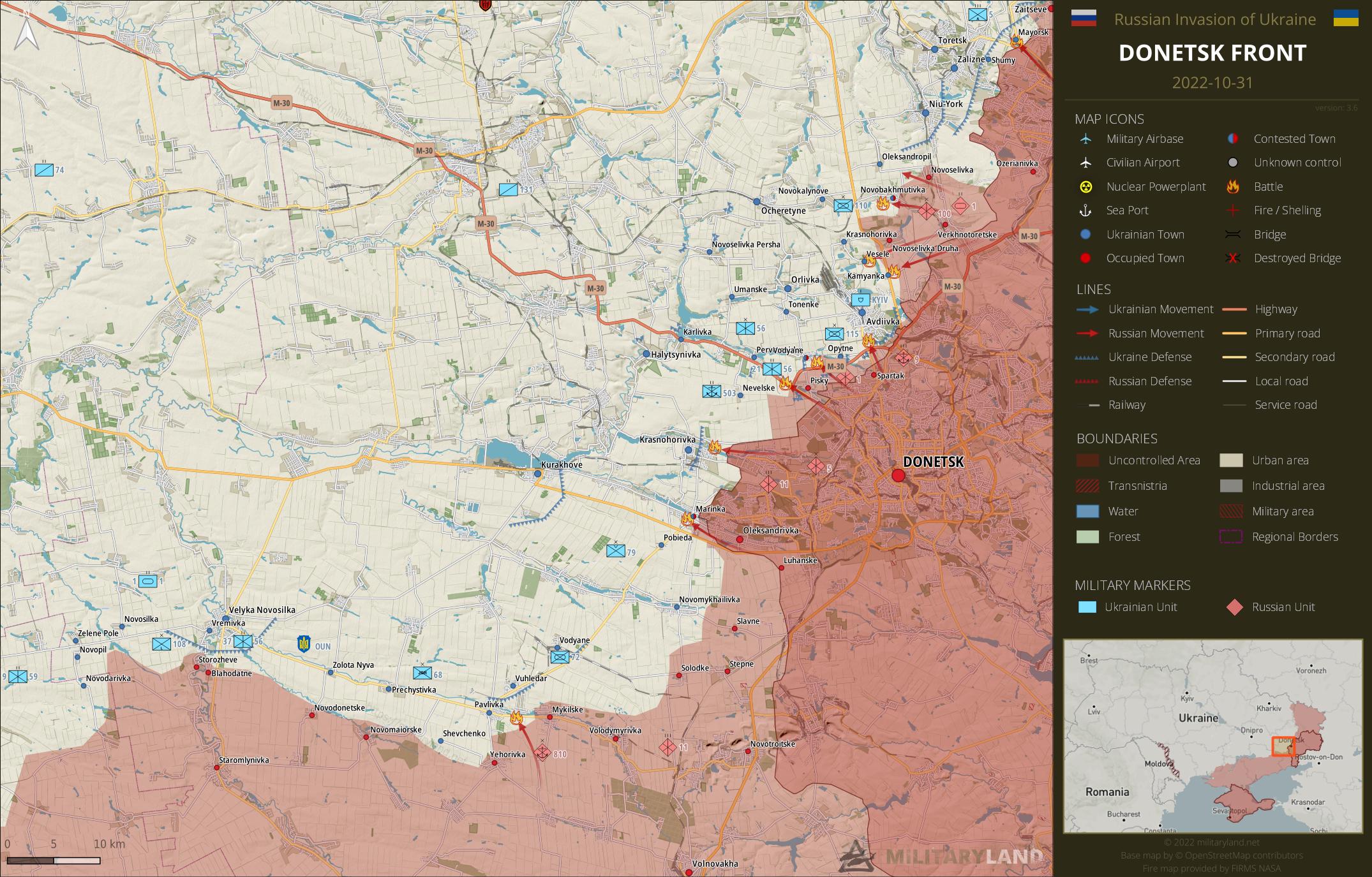 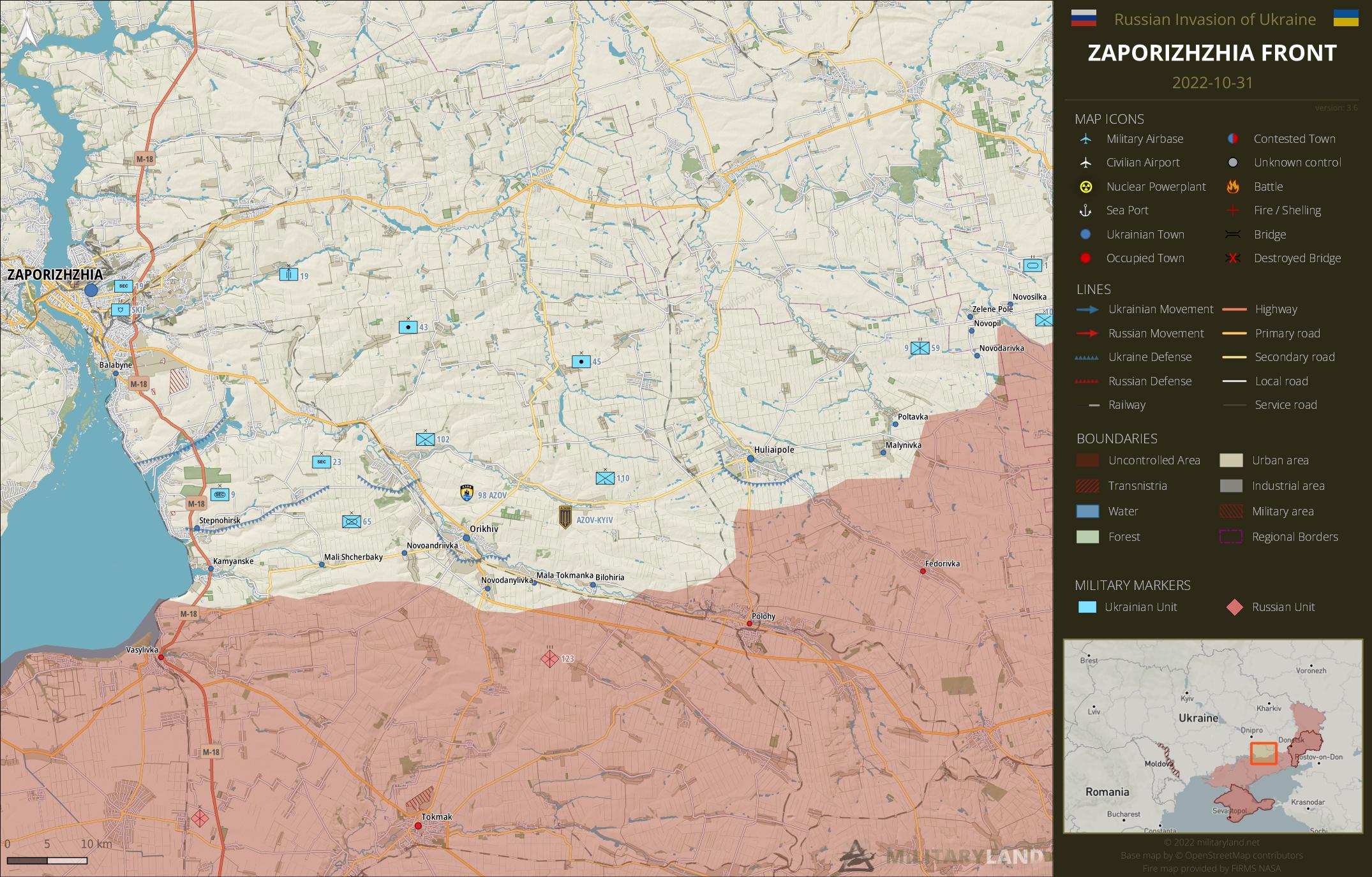 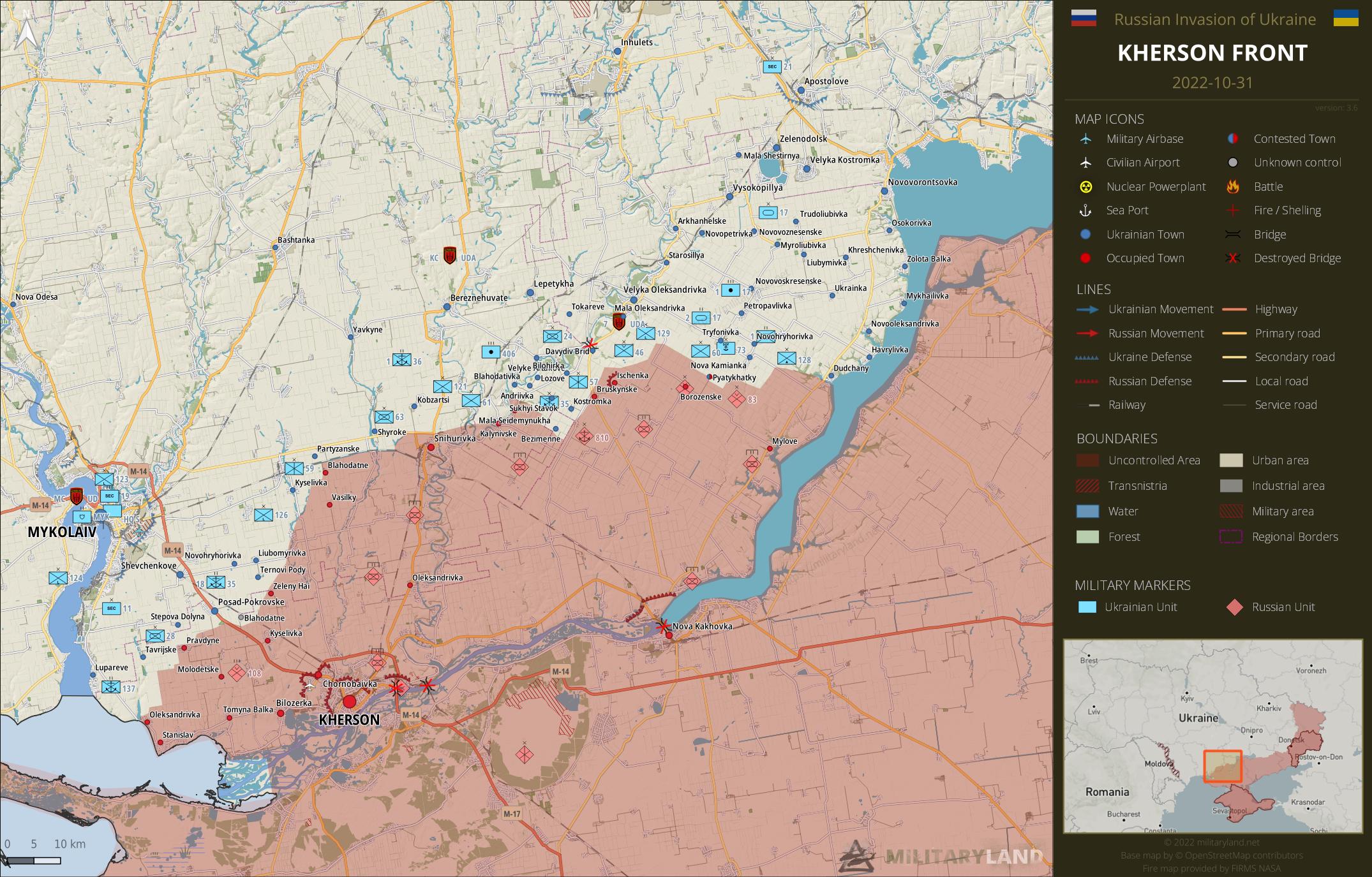 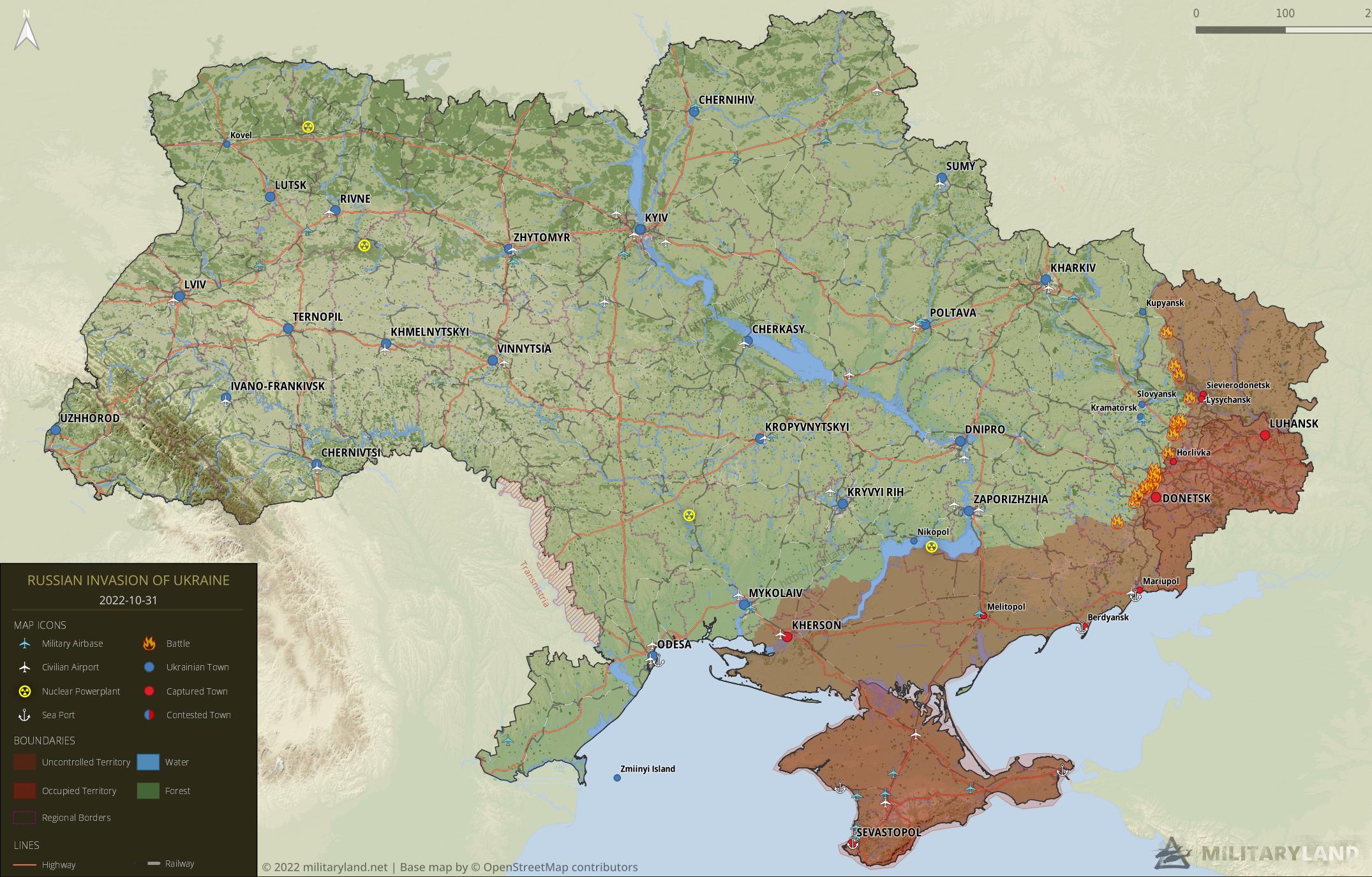 Why the 810th Marine Brigade is shown as whole on Kherson front and on Donetsk one?

Good catch, I’ll correct it for the next summary.

The frontline is frozen, maybe because of the mud. But RUF are more aggressive in several points, maybe it is the effect of reinforcements from the mobilisation.
Question is : why UAF has stopped its offensive one month ago.

Mud, mobilization, waiting for winter, waiting for ammunition, waiting for opportunitys and logistical issues in general. E.g. the logistical situation on the kharkiv front is ugly. All bridges over the oskil are destroyed and few good roads for supply in muddy terrain. To wait for frozen ground and winter issues for the russian makes sense there.

you can’t just rely that Russia has problems in winter, what if they have none?
Every negative effect winter brings with it will also affect Ukraine and simply saying that Russia will have bigger ones, will not eradicate the hardships of winter for Ukraine.
That’s something Ukraine worries about heavily, offensives will be basically stopped, especially with Russian new units coming in.

The weather will be the same for both, the equipment wont be. Mud season is a big advantage for the defender, frozen season is not. Espacially since many water obstacles will freeze. Russian logistics are baaad, and that hits double in winter. So yes, i am extremly confident that winter will hlp ukraine.

Frontline is not frozen. Its just that russian cant lost large area everyday.

Russian are agressive. Just because they doesnt accept to defend. They have 80 000 mobiks without training to kill. They have learn nothing.

Before to collapse in lyman and kherson, they were also agressive.

sorry, clarification, i meant enemy at the gates.

When ukraine mobilized their entire male population nobody lifted a finger and they had a lot of supply issues at the start like the russians are having now, why should we act differently for the russian mobilization? No matter how poorly trained the mobilized might be, think back to WW2, germany got their ass whooped by millions of untrained russians.

The Russian mobilization will change the course of the war, but doesnt necessarily mean that russia will win. I hope ukraine wins, but its like american and european union propaganda to believe that 300,000 people will do nothing.

Mobilization has brought a bloodbath in october (numbers in the forum), thats for sure. It also seems like it slowed ukraines momentum together with the mud. How big the effect on russian combat will be, is the question.

But the frontlines are still changing near vuhledar and in pavlivka, as well as north of donetsk airport and in kharkiv-luhansk border. It hasnt slowed down yet. Besides, ukraine suffers losses too, but a lot of people act like they dont.

I don’t get what your point is.

As far as I know, nobody acts like Ukrainians don’t suffer losses, but what can we do, except sending them more weapons.

Concerning russian mobilisation, I think you are wrong to compare it to WWII. 2022 Russia is not 1941 USSR. Russia lacks the strong industry and the american supplies USSR had. Russia is a corrupted country, with an aging population.

If you want to know more about russian mobilisation, you can watch perun’s video on the topic: it features an interview of general Ben Hodges, a former commandant of US forces in Europa who had made some quite accurate predictions so far about this conflict.

So predictions about the weather in Ukraine were correct. UAF had to counter attack before end of September, after the mud makes it very difficult.
When I read your comments, I make the conclusion that winter will be favorable to RUF because they are the defenders, temperatures are higher than during WW2 and rivers will not freeze enough for heavy vehicles.

I wouldn’t expect to much befor the ground freezes up north. There ain’t good reasons to hurry in north west kherson either and the south will probably have to wait for spring anyways, since muddy season doesn’t end there and the end of winter is the worst mud time. Ask the russians about that…

Nobody expects the Spanish Inquisition. Or the November offensive. So far, the Ukrainians have been very adept at surprising everyone, especially the Russians. The fact that it seems so difficult makes me think that this is exactly what they’ll do.

Big Offensives are highly unlikely.
Like the other guy said weather fucks some shit up and is also very unpredictable.

To put it simply if there is a huge big offensive during the winter… I would be highly impressed.

The soviets launched a large offensive in the winter of 1942 and severly weakened the germans, winter is not simply freezing the troops in place until the spring, its possible to launch attacks. And that offensive was in -40 degree(fahrenheit) weather, in southern ukraine, it will be probably 20 degrees or 10 degrees. So a lot warmer, though still not warm.

The ground in the south hardly freezes at all these days. That makes motorized large winter offensives very unlikly.