Ukrainian Army advanced closer to Svatove in Luhansk Oblast, while Russian forces reached the outskirts of Bakhmut from the south. Russian troops attempted to cross the border in the area of Budarky in Kharkiv Oblast, but were caught and forced to retreat.

On Saturday morning, an explosion rocked the Kerch Bridge connecting occupied Crimea with the Russian mainland. The road bridge partially collapsed, the state of the railroad bridge is currently unknown, but given the released photos, it seems to be only lightly damaged. 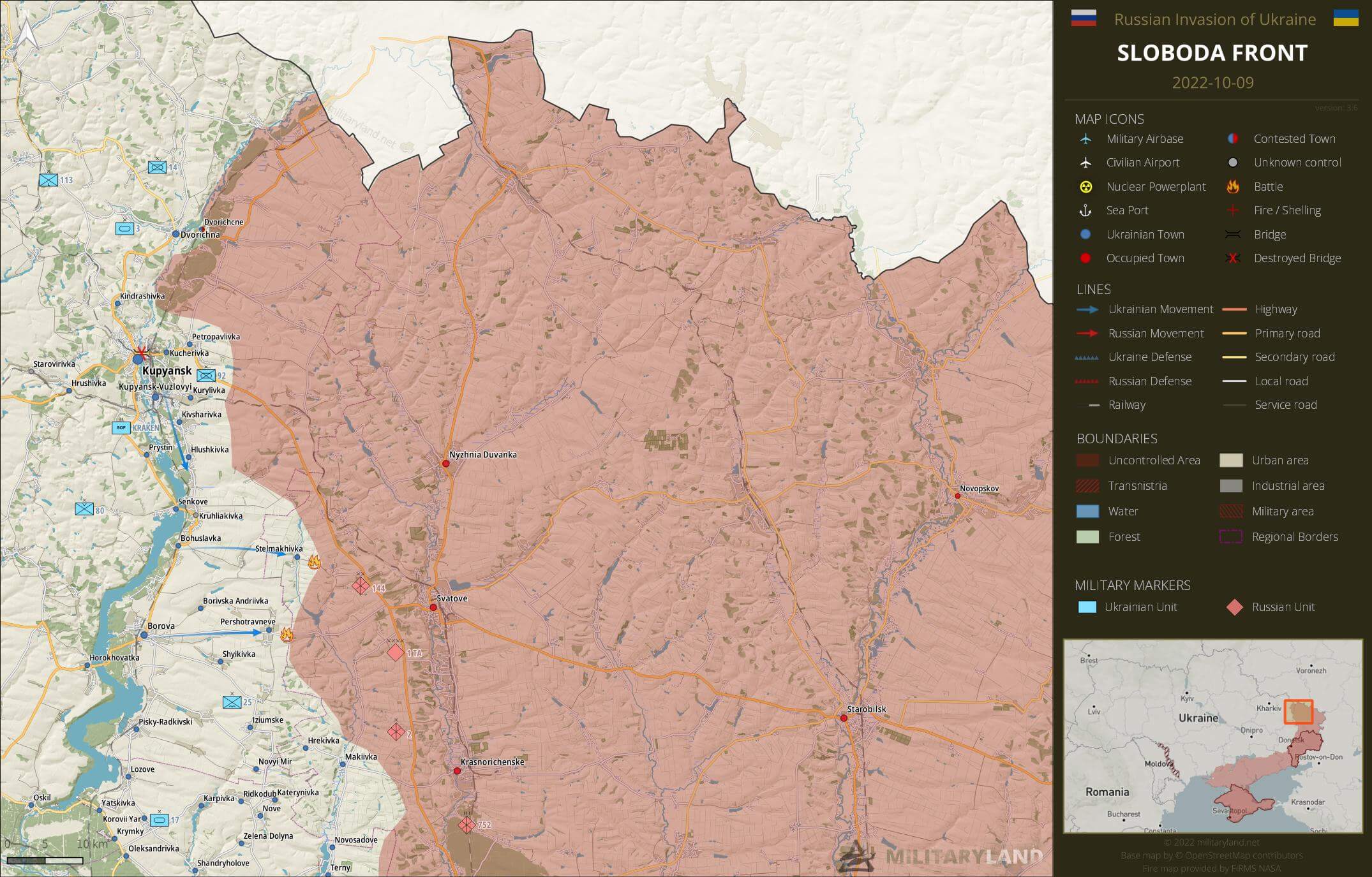 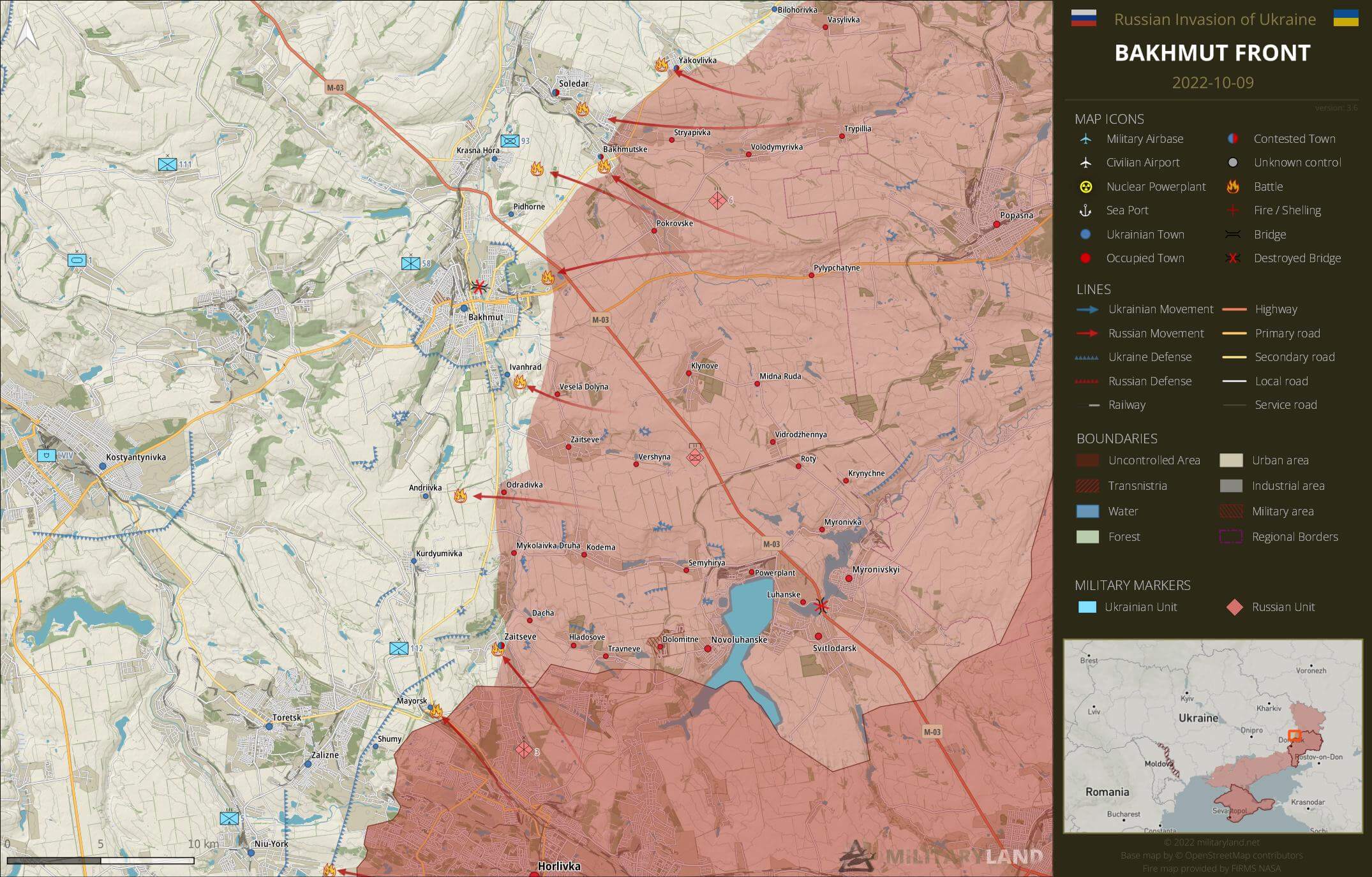 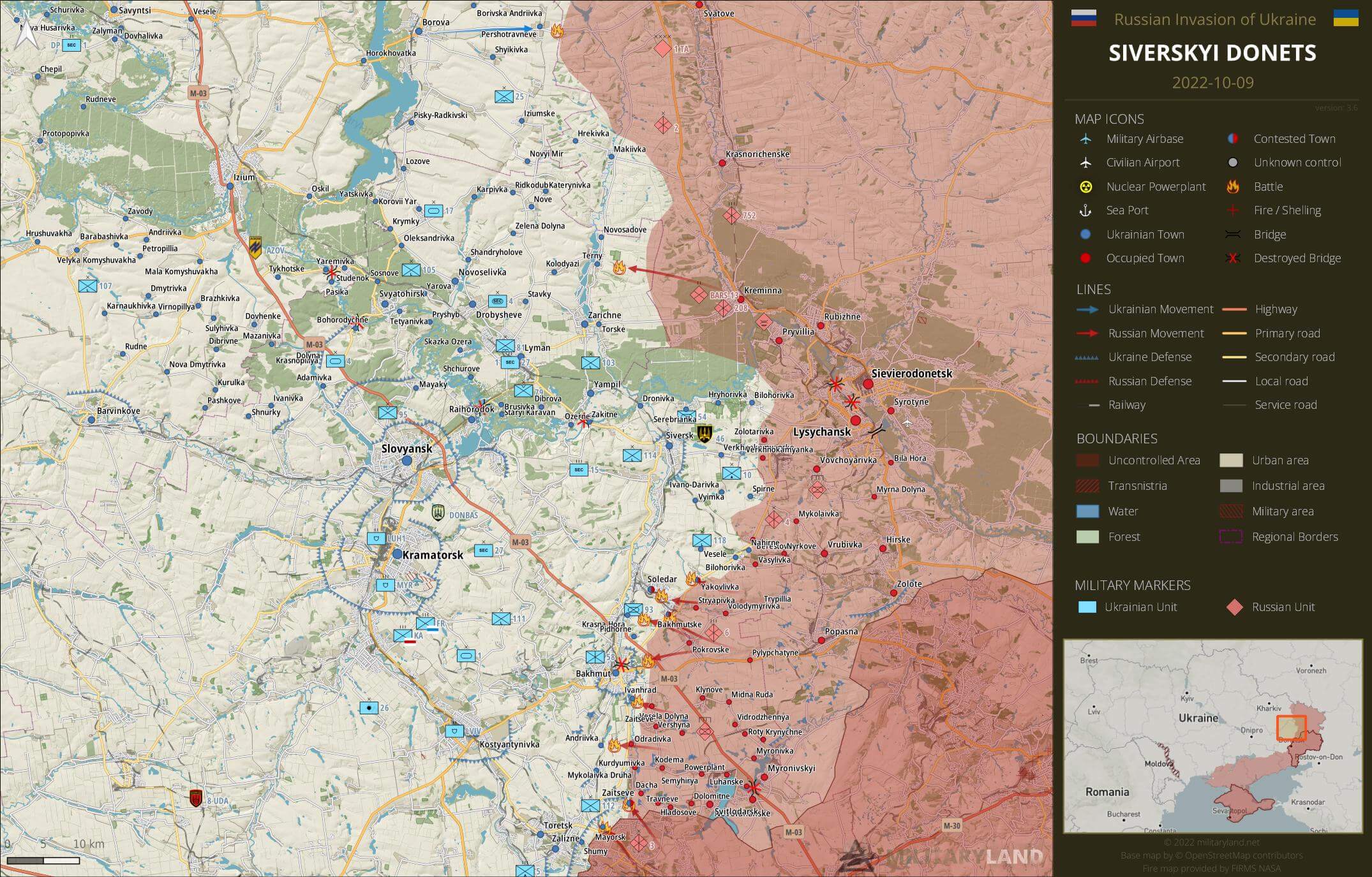 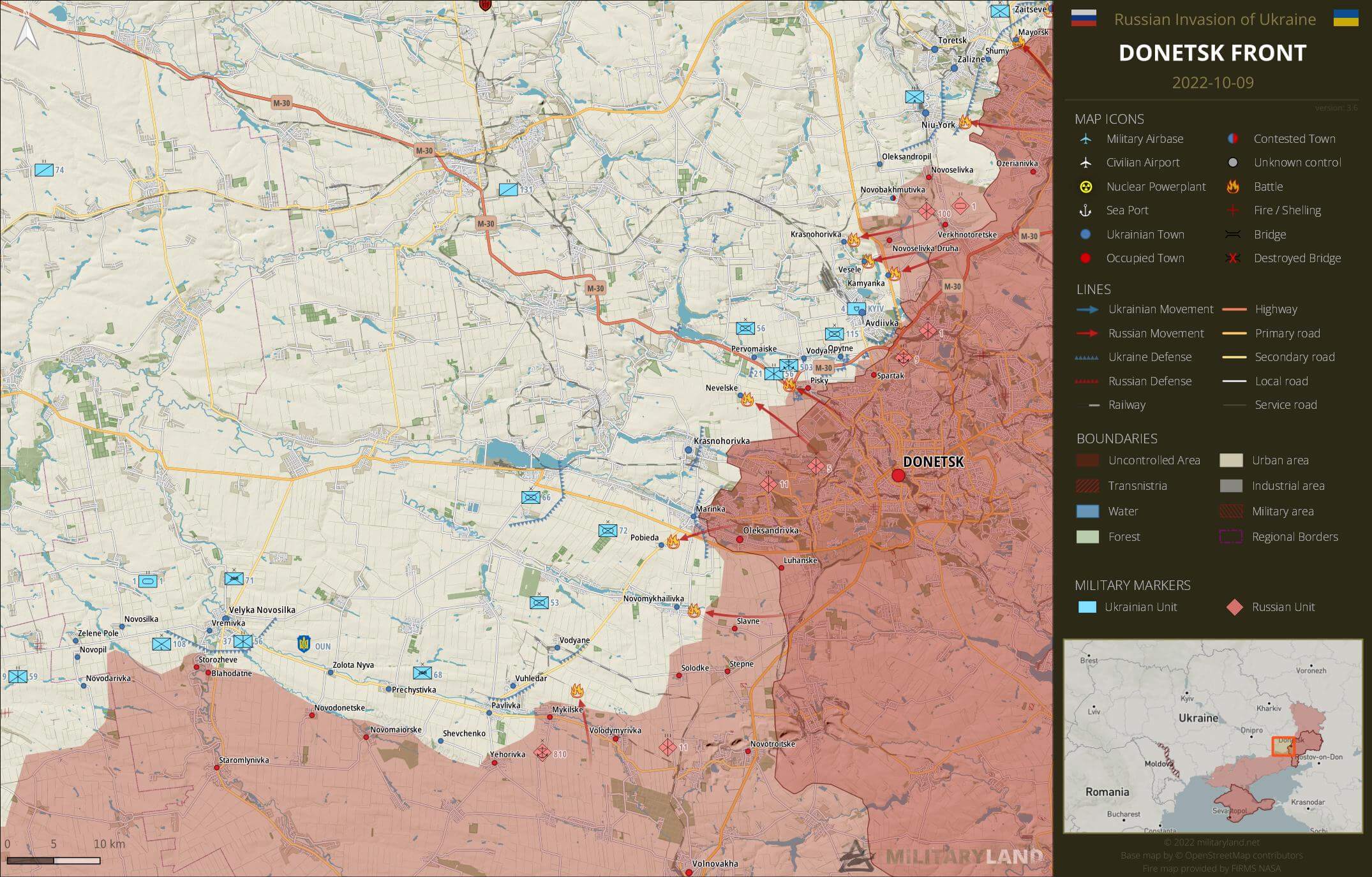 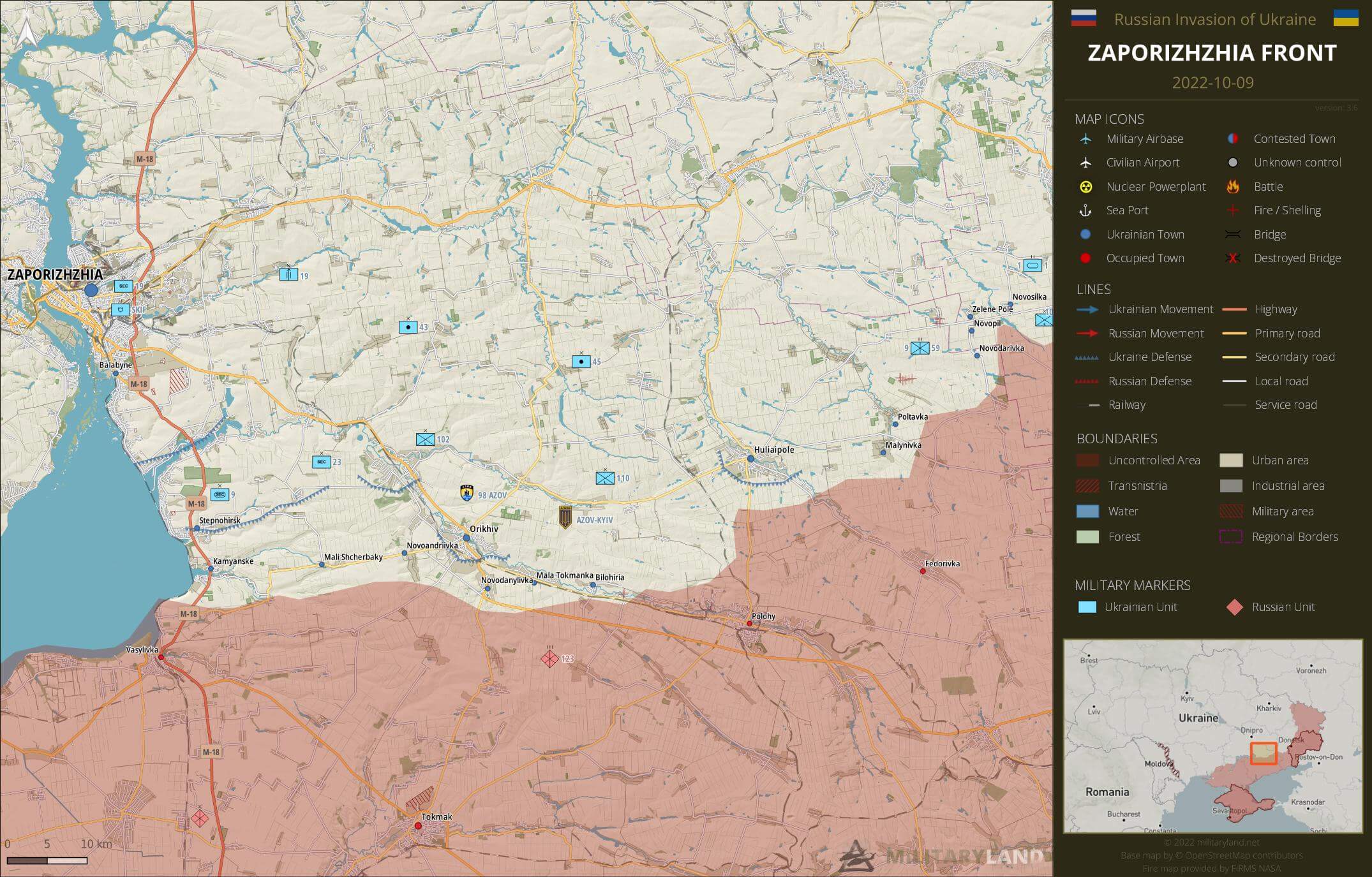 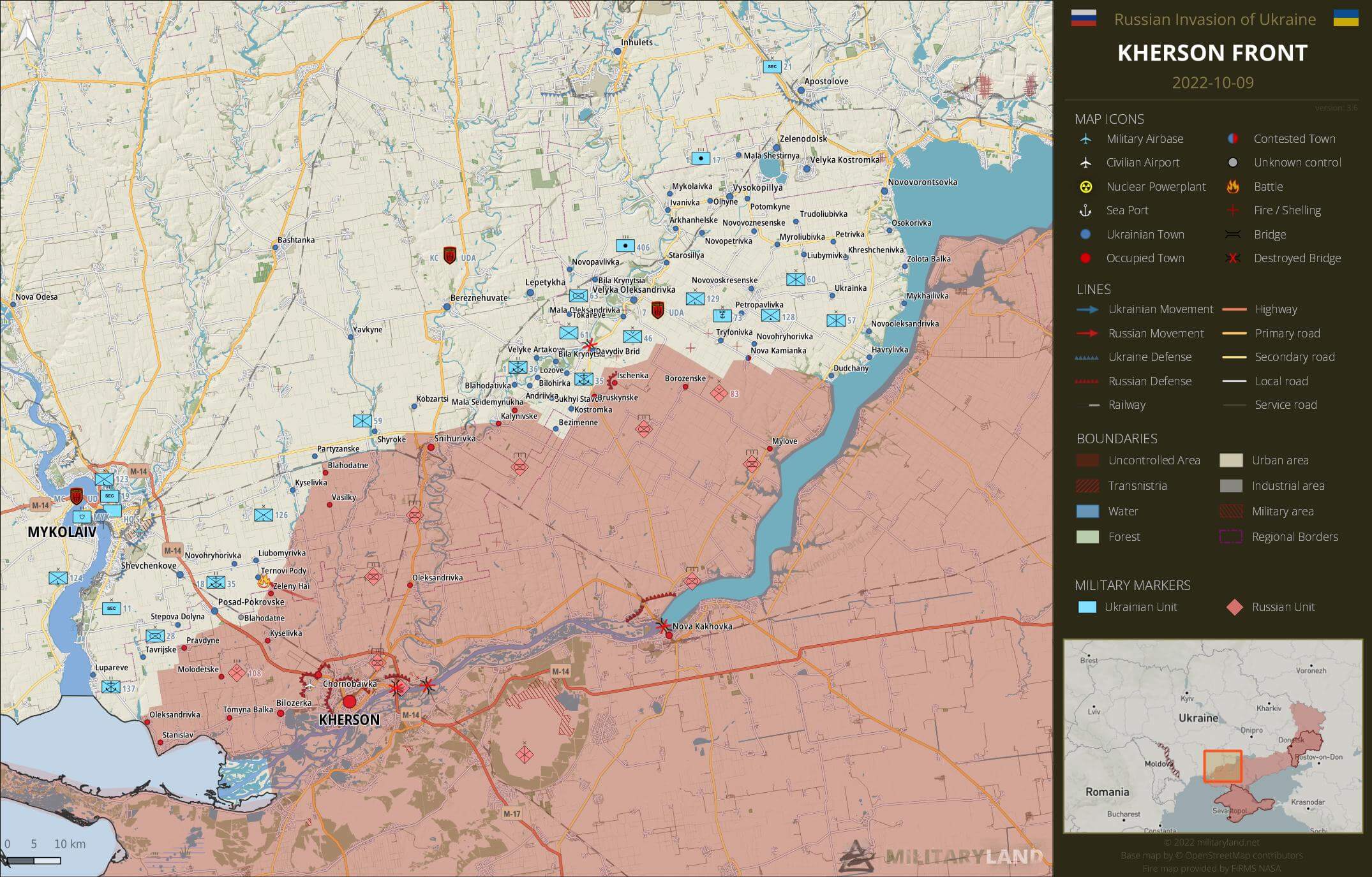 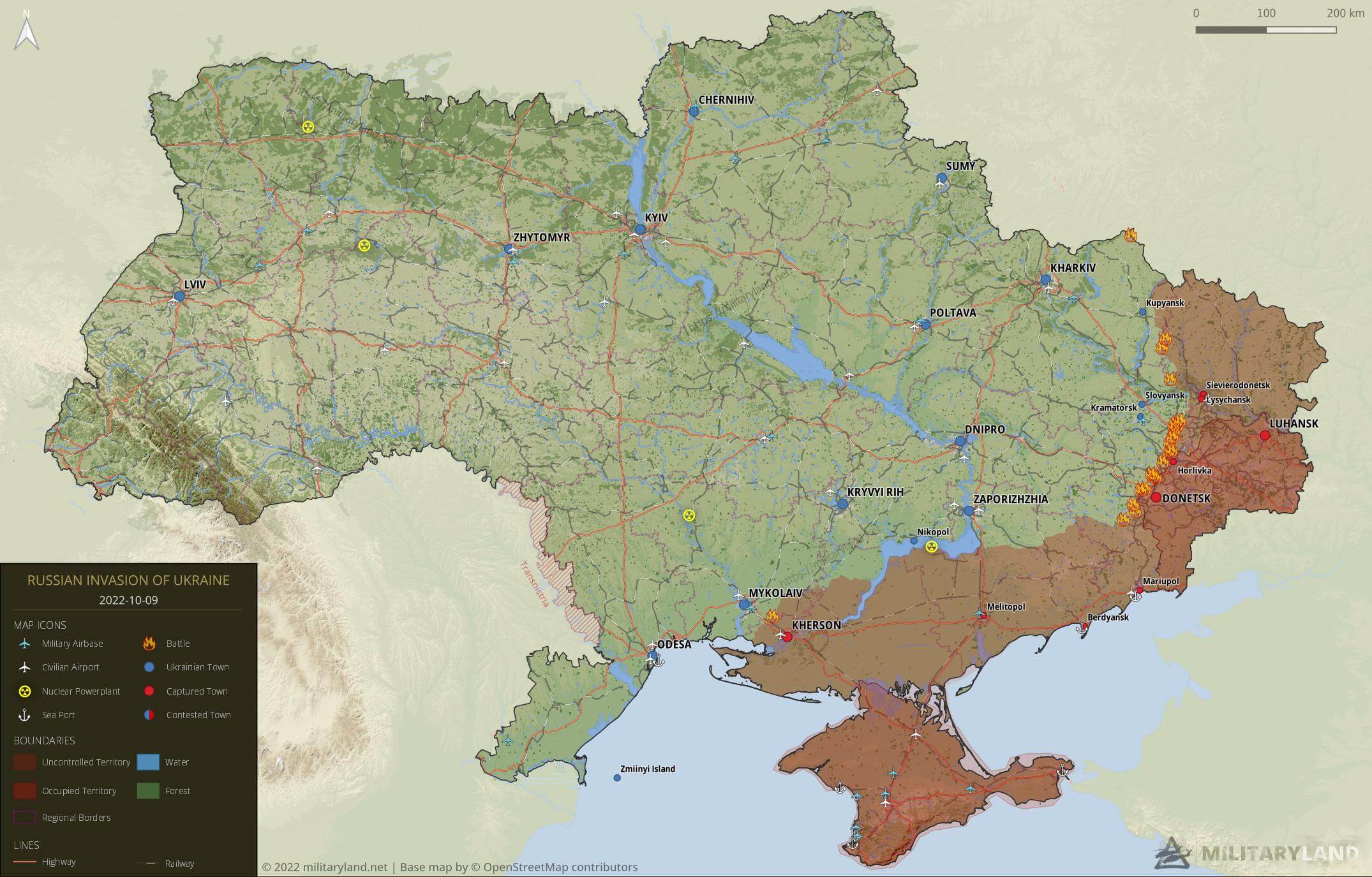 I still believe that the Crimea bridge was a FalseFlag operation to have an argument for such terroristic actions. I also believe that the next ukrainian move will be a cut between Kherson and Mariupol. I’ll wager that Mariupol will not be russian territory with Christmas, and I also doubt that Putin is still in reign (or alive) at that point. It’s just a gut feeling, though

If it was, they might have not noticed there was a train full of fuel in the railroad. Bombing one side of the highway seems something Putin could do, endangering the railroad, seems a step too far for a false flag operation… even for Putin.

(1/2)I agree that it remains questionable. But I can imagine several arguments here. It is possible they were stupid enough to not know that the train was there. Also, I can imagine that, looking at the actual damage and the speedy recovery, it was planned like this (but I have no idea in what detail such damage is predictable). The recovery was so quick, I really have my doubts here.

(2/2)Also, just a play of thoughts, imagine they took the risk to blow the whole bridge into nirvana, so Kherson/Crimea was cut off. It would have been a means to either totally escalate or more or less give in and call it quits, retreat there and focus on Luhansk/Donesk. Regroup, and try again later

Last edited 1 month ago by Matthias
0
0

In the absence of convincing results on the military field, Putin is attacking the civilian population and making the Belarusian rookie bark. When will the Russian people finally wake up from their fatal lethargy?

they won’t in any near future, why – check Vlad Vexler’s videos on YT.

Sit no negoziate what? All area Military occupied now are part of Russia ( for Putin only) that means in no way he intend to negoziate any partiamo withrawl. Putin itself has decide this Is not a war, meaning It Is something somehow not so hard.

Putin and his hordes have left the consensus of civilization, as defined by the Geneva Convention, which protects civilians at times of war. These are war crimes full stop.

I think that was the point of Jordan Peterson that inherently Putin can’t “lose” in the traditional sense since the worst-case scenario for him is Ukraine becomes scorched Earth and blames the West for it. I guess we’re entering that phase. What I think is that this war will drag on, and Russia will start importing weapons from China, and at some point will leave Ukraine.

China wont sell any weapons to russia.. China has big problems with economy, and last thing they need right now, are any western sanctions…

Russia has a lot of tanks, so many that you can even give them to Ukraine. How it was in Izium

Who is going to sit inside those tank?

China can Sell weapons to russia, western cannot afford to sanction China, it is already on the verge of a general recession due to Ursulita’s sanctions, imagine if it occurs to it to sanction the “factory of the world”

China has its own problems with its real estate housing bubble. They would have already provided weapons to Russia if they wanted to. China’s real estate company Evergrande has 305$ billion debt

Its a race for who to blame for starting the global crisis: Europe with its energy crisis, China with its huge debt on real estate or USA for printing 40% of total money during covid and giving it 0% interest to banks

China could be selling weapons to Russia, but they’re not, and they won’t. It’s not in their long-term interest.

try to avoid patients pretending to be therapeutists (or philosophers, which is kinda rich). Until ofc. you are convinced that Putin is saving the worlds from the Woke Invasion. Starting with fighting against mutated pinky Ukrainian nongendered ponies.