The situation south of Bakmut is getting complicated. Russian forces, after months of trying, managed to advance and capture at least two settlements.

Ukrainian forces liberated another bunch of villages in Kharkiv and Kherson Oblast, but the pace has slowed down. It’s logical. The spearheading units needs to resupply, rest and most importantly, the rear units need to secure the liberated areas and set up all necessary defensive positions to be ready in case of Russian counter-attack. 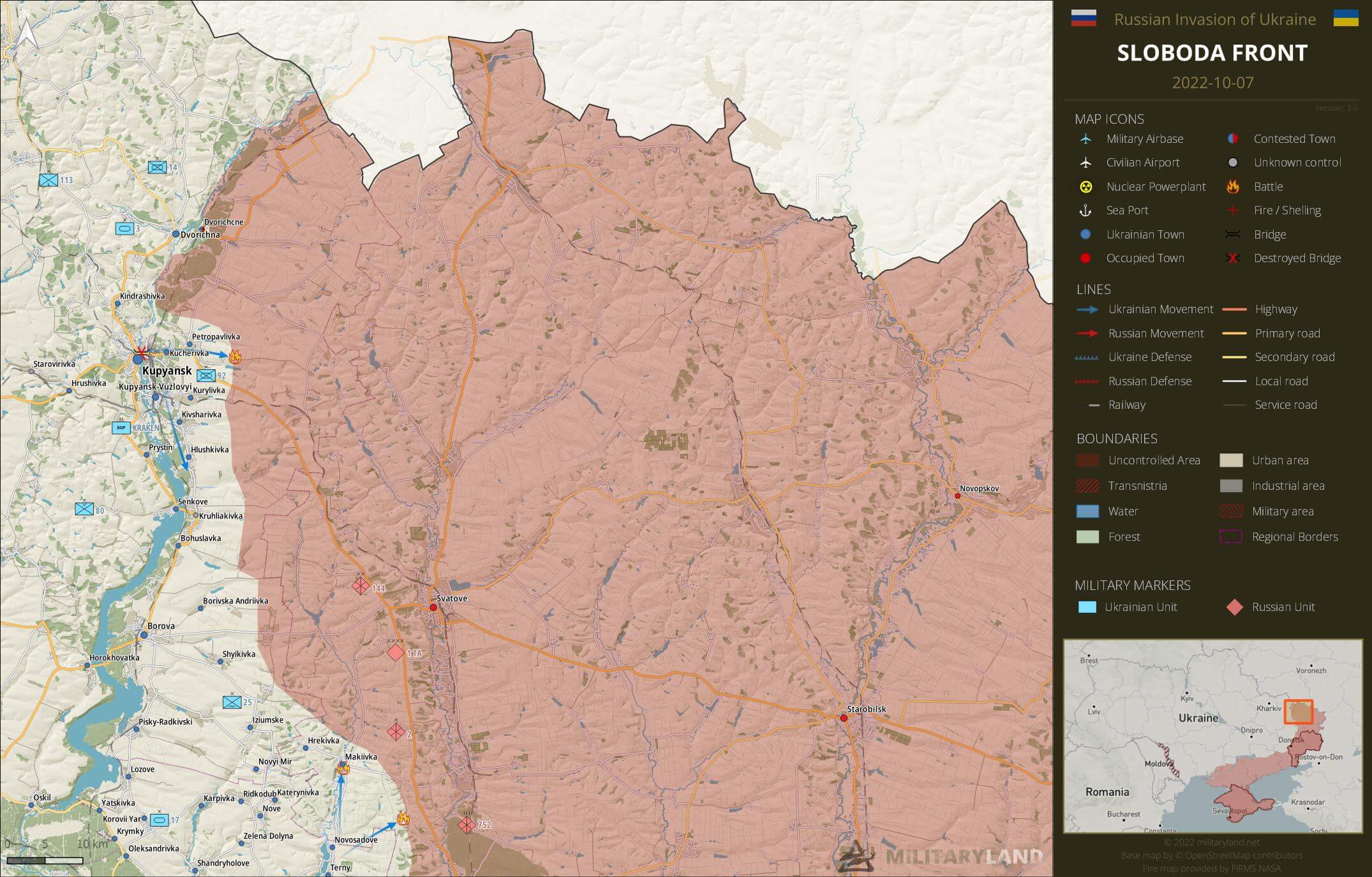 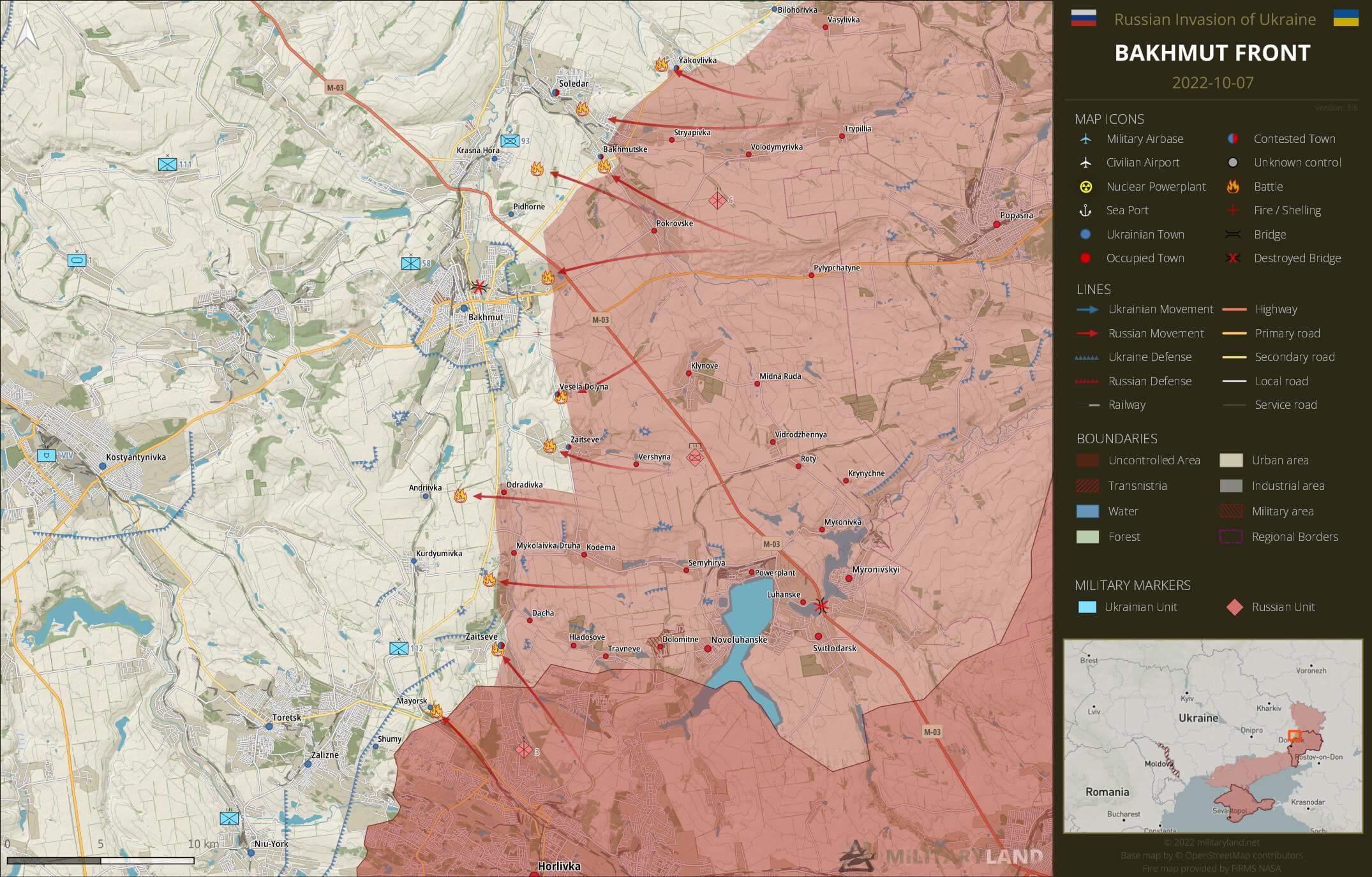 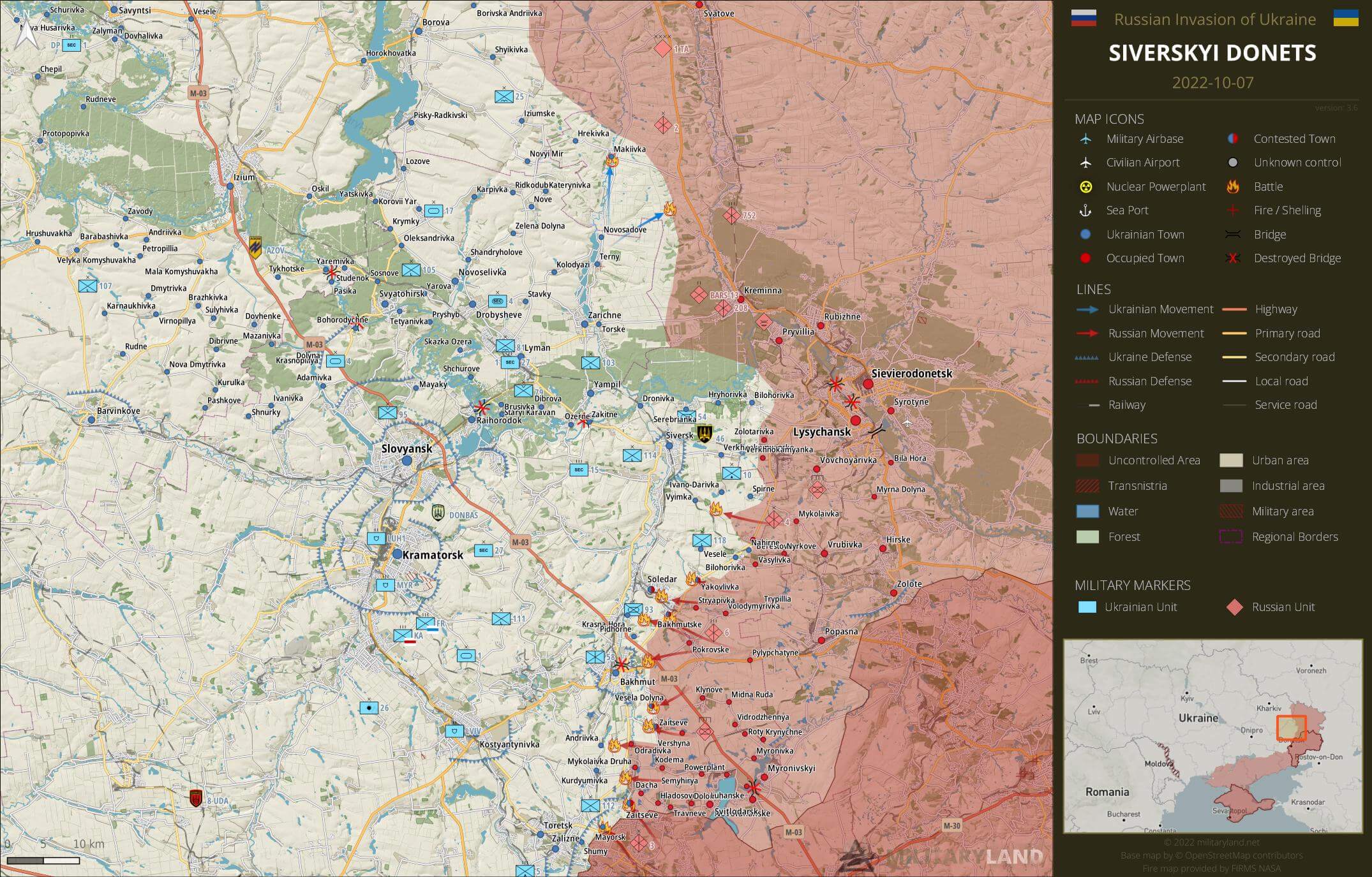 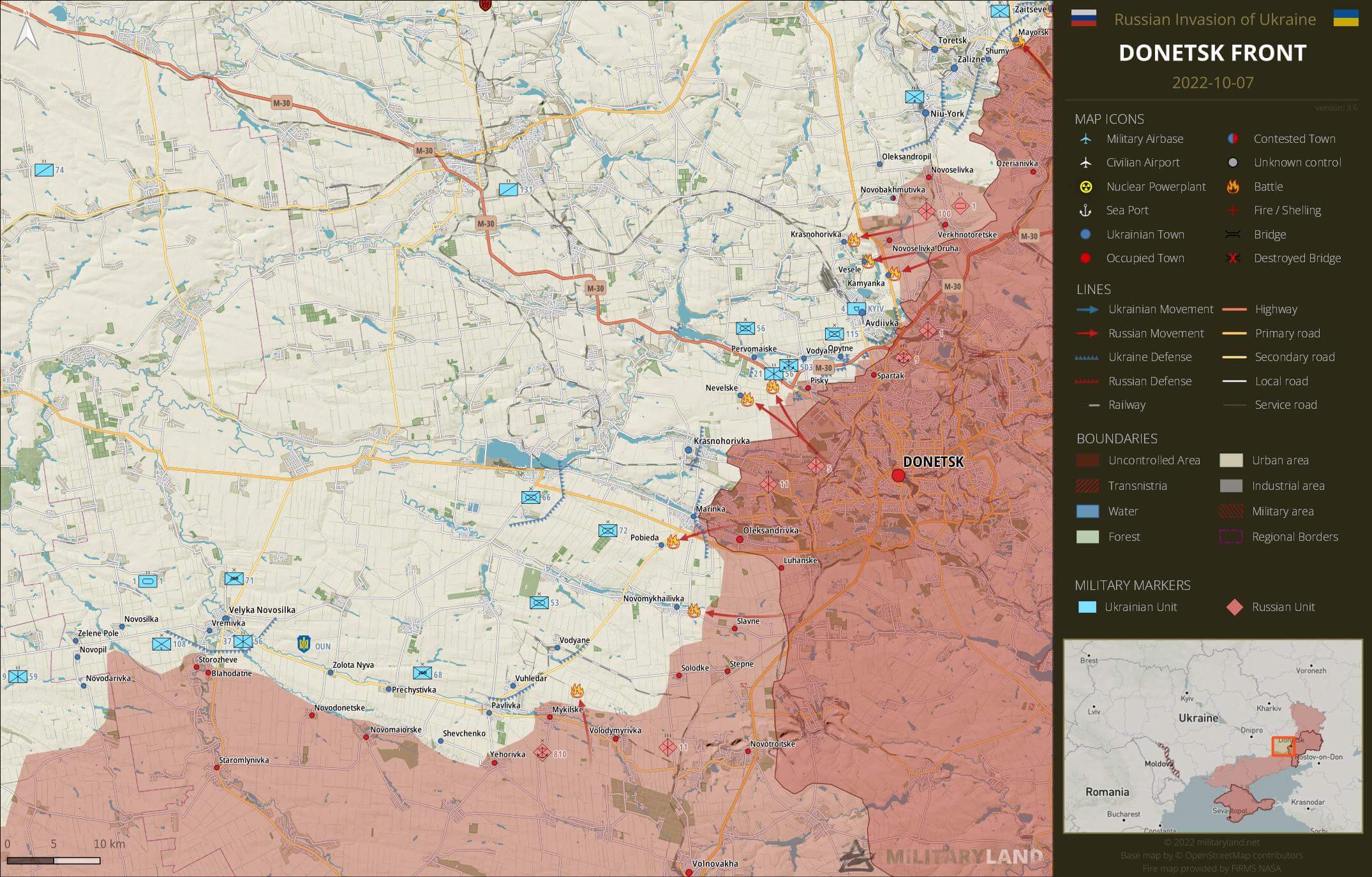 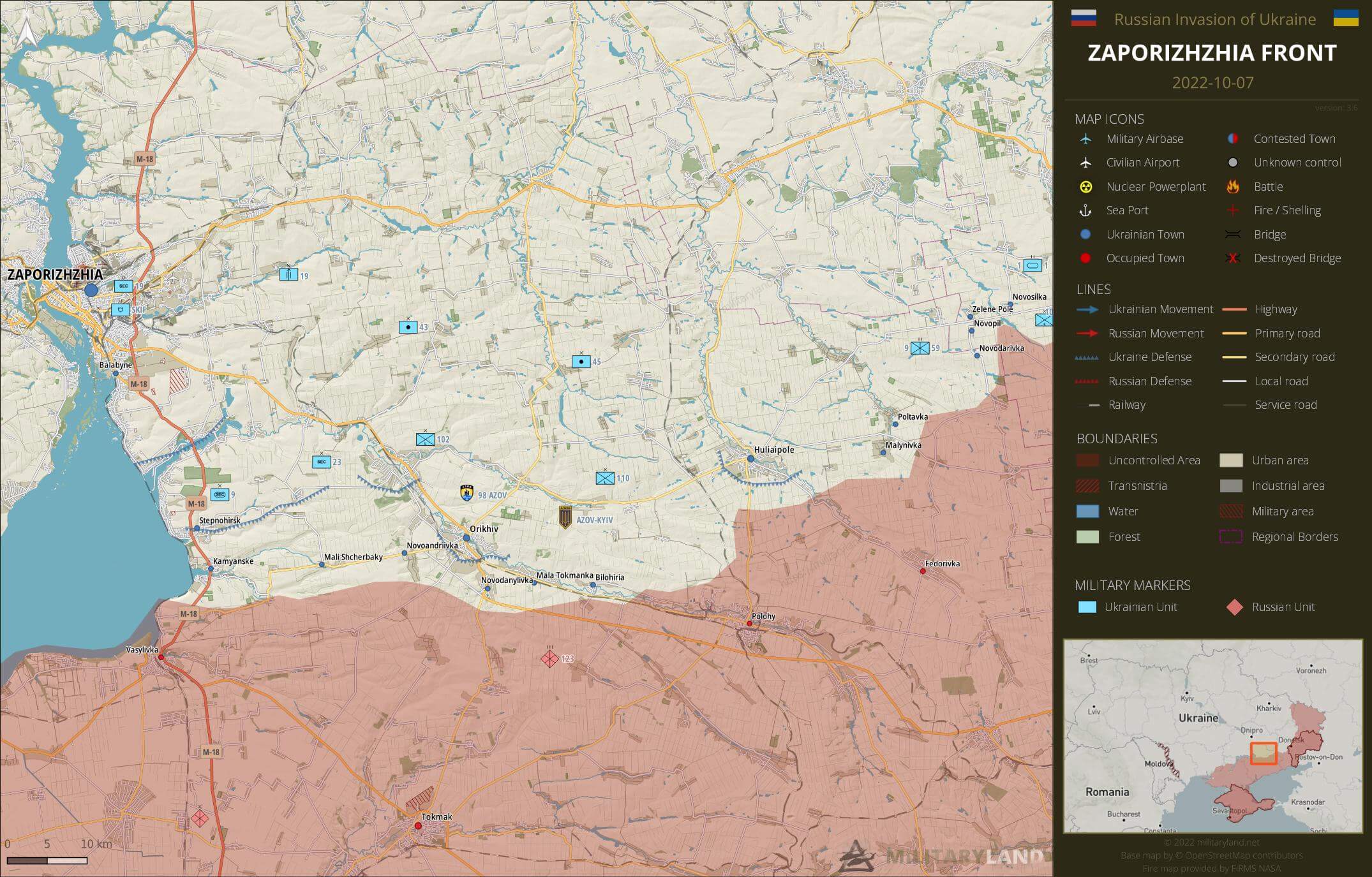 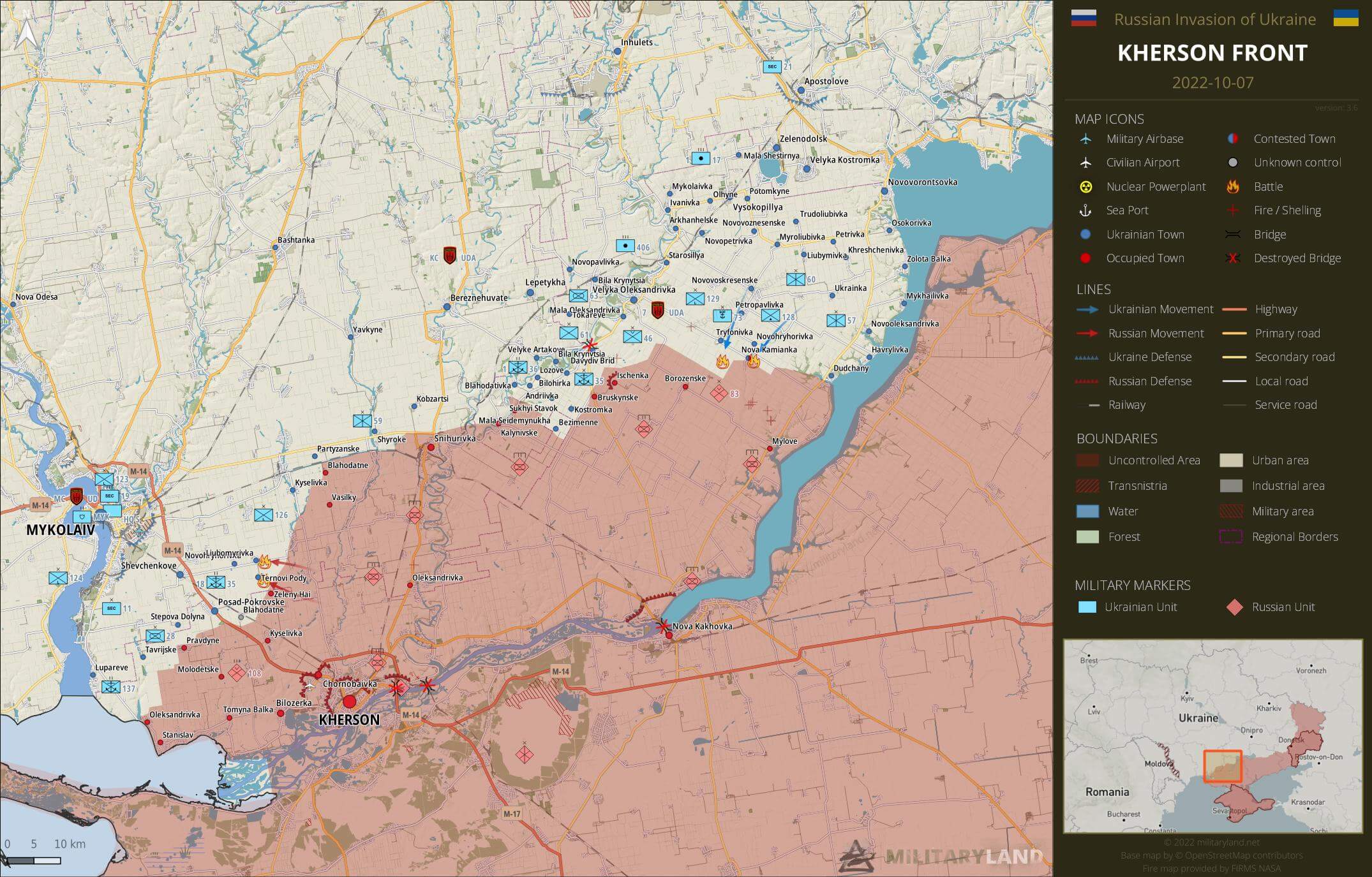 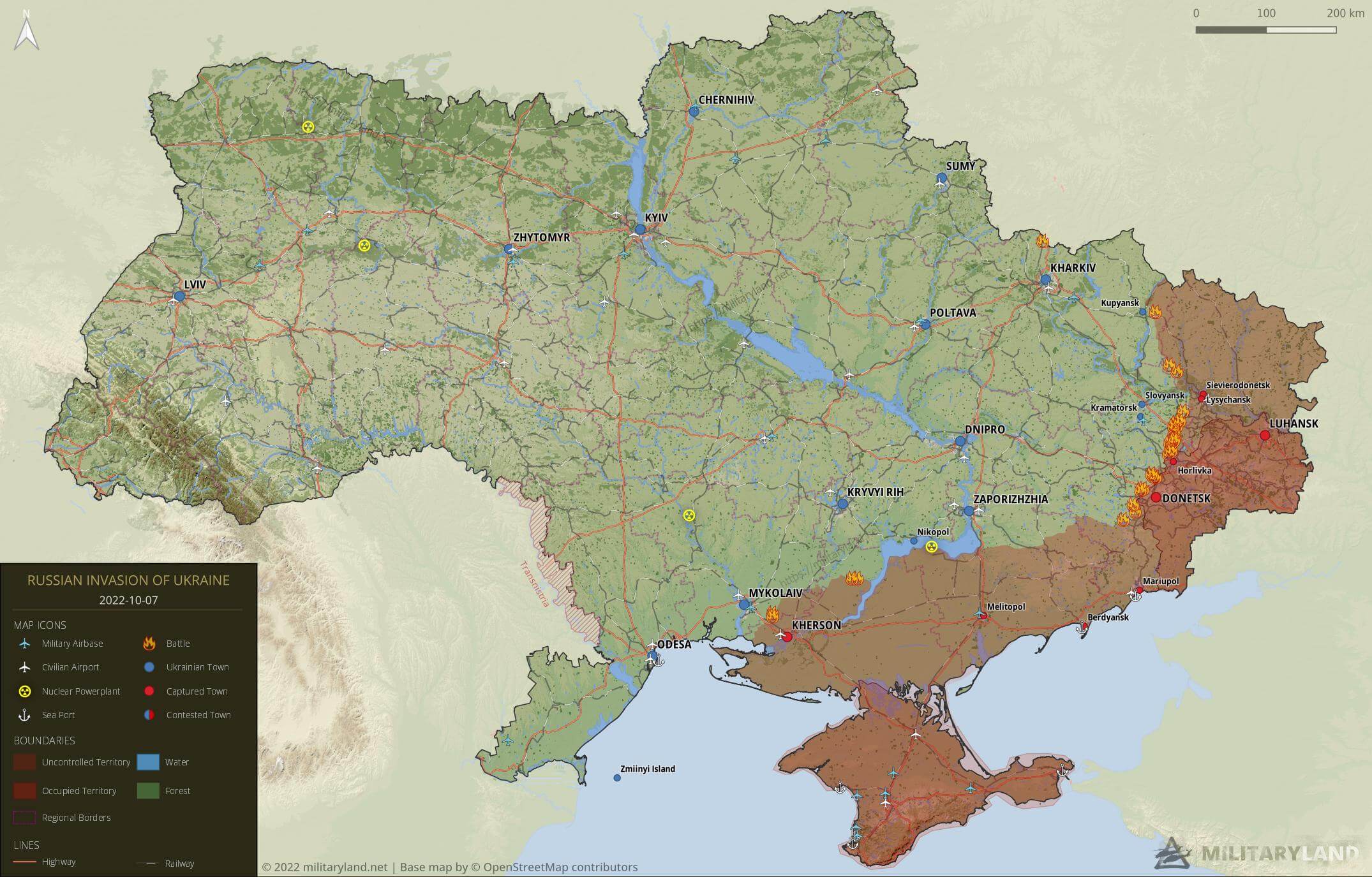 Put a load of explosives in a barge and remotely guide it under the bridge and detonate it, maybe?

I really thought they wouldn’t go after the Kerch Bridge. Very surprised about this news. (I’m also curious HOW they did it; it’s out of HIMARS range?)

If the goal is to induce absolute panic in Crimea… they will. Maybe now UKR strikes across Zaporizhzhia, to Mariupol, to totally cut off all Russian forces to the West?

besides just a probability of mere accident (accidents happens, even in war, not every damage is premeditated) – it’s a good example of a ‘demonstration attack’. The damage is not that big – they will repair it in a week maybe two. Demonstrative effect (capability, const requirement, lost time, forcing to reroute additional security, morale influence etc.) however, is significant.

THE DAMAGE IS BIG , bigger than kherson bridges , one side of the road is collapsed , the railway should be destroyed completely due to the explosion of the train transporting fuel , what is true is that the bridge is really big and one way is still up so they will maybe use it again but it will not be not fully operational again for quite some time .

i am curious though if the double explosion ( truck plus train ) was sincronized on purpose or if it was just luck . bcs that is really big luck if not wanted .

From multiple views of explosion from different sources there only appears to be one initial detonation & fireball – from the truck. Looks to me like the train tankers were pierced by the explosion and leaking oil/fuel caught fire.

Not the truck, barge under the bridge full of explosives.

Colin: There are overhead & underneath images on @Osinttechnical (Oct 8) that show top blackened with barriers & lamp posts blown completely off but underneath is clear of scorch marks & relatively unscathed. Have a look, I doubted it was the truck at 1st but evidence seems to indicate it actually was.

not really, just as I thought from the images – one double-lane is off and train lines were not severely affected(which is much more important). 1st train already passed through. The question is if the rail lines are still good enough to deliver the same throughput -which we shall see in coming days looking at the barges movement.

The damage may be even worse than it first appears. There will be cracked concrete and fractured, bent and melted (train bridge esp.) rebars.
Note that the 3rd road section that fell was *not* directly under the explosion, unlike the first 2. Lateral force from detonation on support column caused it to oscillate, dropping 3rd road section maybe?

That explosion looked too big for a HIMARS, anyway.

NY Times reporting that a truck bomb exploded on the road bridge while a fuel train was passing by. Fuel train exploded too. Well done UKR – not easily coordinated.

As for “easily repaired damage” – maybe; but at least two sections of road bridge collapsed into the water. Easily visible in photos. Unclear how badly the rail portion (which is more important for military ops?) was damaged.

In one of the videos, you can see some kind of boat passing under the bridge when the explosion happens. So that’s another possibility.

Or it could have been the Jewish space lasers.

And the driver was Russian (russian investigators said so, read it on “lemonde.fr” today), so it is an inner “suicide activist” sending a message to its own country ?
Or a bad accident of some sort.

would there be a “Kharkiv front” available for day 226?

Battle of karkiv is win by ukr.

“all I see is the fonts collapsing” quoting the classic

shouldn’t rest for to long tho, the longer they wait the more reinforcements from russia arrive, that means harder pushing and seeing how they start to stuggle already. russia made the same mistake with siversk right after the capture of lysychansk, they simply waited to long. right now ukraine has massive manpower advantage, but if russian reinforcements arrive, it will get pretty hard

Not that i minimize russian fresh troops, but the reinforcement should have way less experience for combat than the first wave that gathered on the borders before the invasion.
And it was a mess with these soldiers trained & prepared, so with soldiers less experienced ? I know the numbers can help but it can also turn into a blood bath.

Last edited 1 month ago by RED.Misfit
0
0

yes they are fresh troops, but that does not mean they are inexperienced, since they already had their mandatory service and also undergo training before being send in, so i wouldn’t call them much less experienced then the first wave of the invasion, ukraine has showed how much of a help those troops can be even with absolutely no experience. most of those reinforcements are meant for defending.

Yeah, those prisoners and guys they’re abducting at the border should be pretty tough soldiers. That’s how you make a 1st rate army.

No training can prepare yoou for bombardment.

Its time to attack the center. Wait and see.

I’m surprised this hasn’t happened yet. Seems like there’s an excellent opportunity to cut off Kherson if Ukraine launches an offensive along the right bank of the Dniepr. Seems like that terrain is pretty open, not a lot of natural barriers.

I think I meant the left (East) bank.

maybe that’s he reason , too open for a frontal attack