Ukrainian forces are slowly advancing in the northern part of Donetsk Oblast and continue to repel Russian attacks in the vicinity of Bakhmut.

The Russian army attacked the city of Odesa with Iran-supplied kamikaze drones. Two of the drones made it pass the Ukrainian air defense and hit a building in Odesa port. 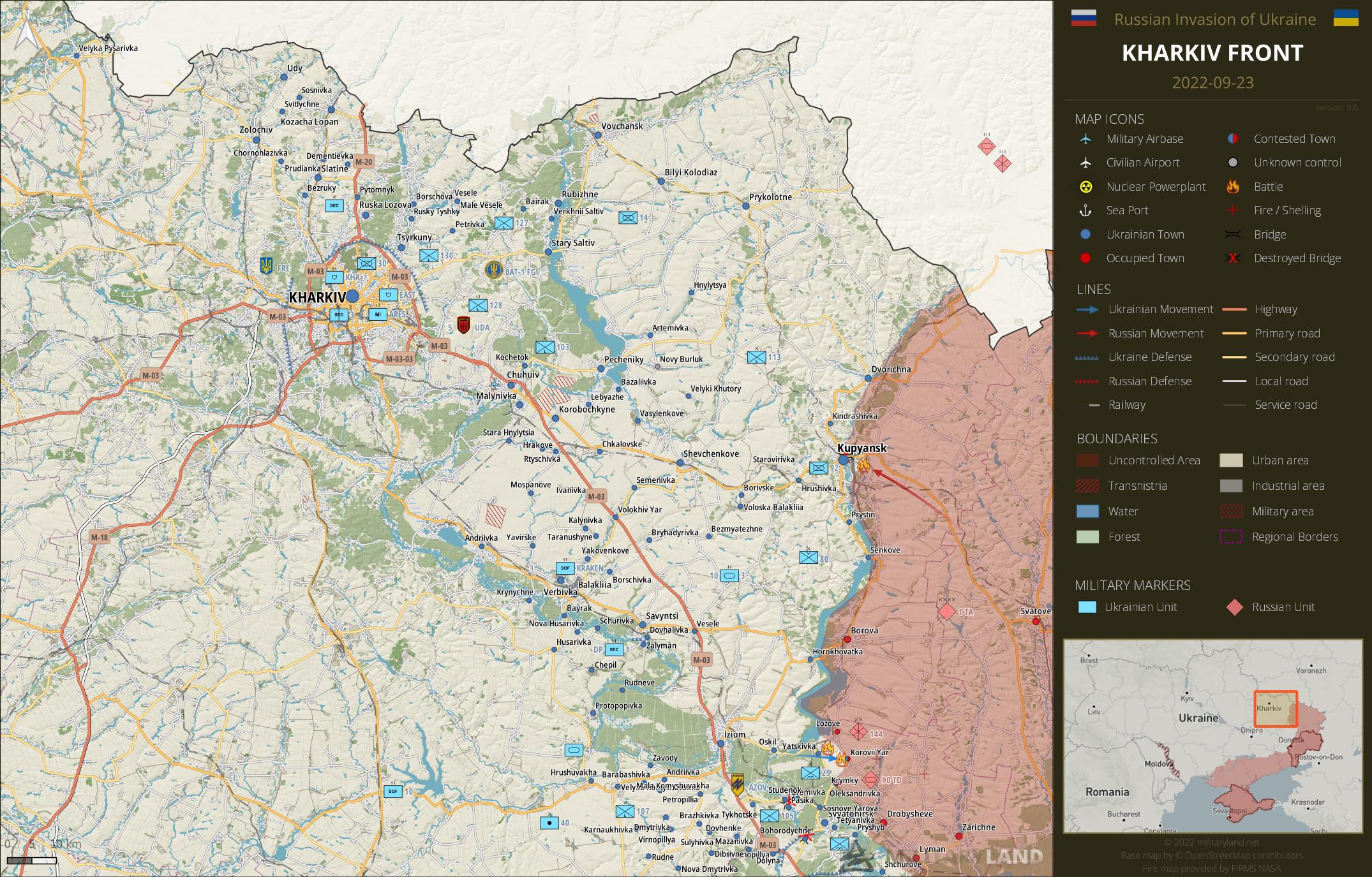 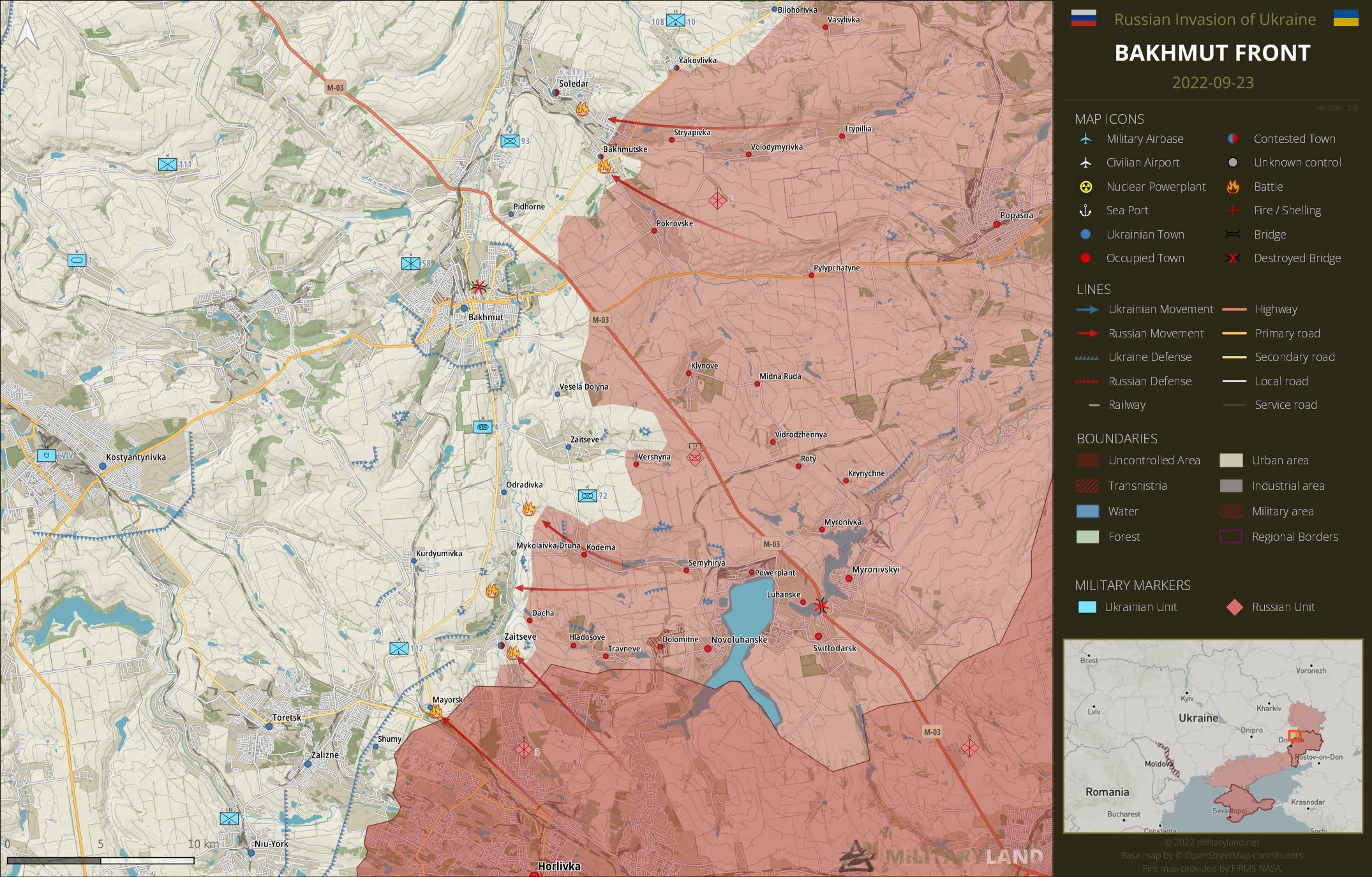 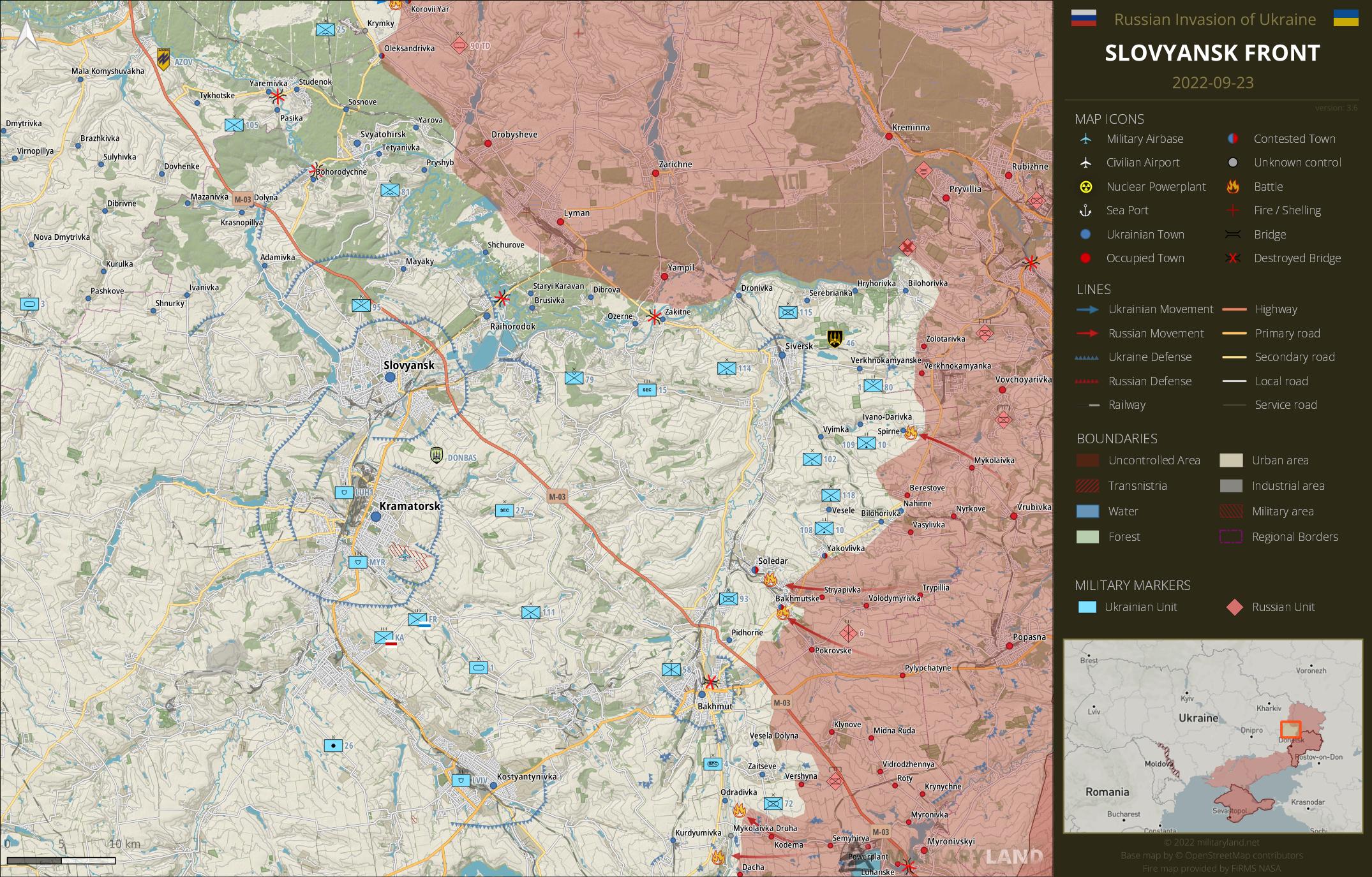 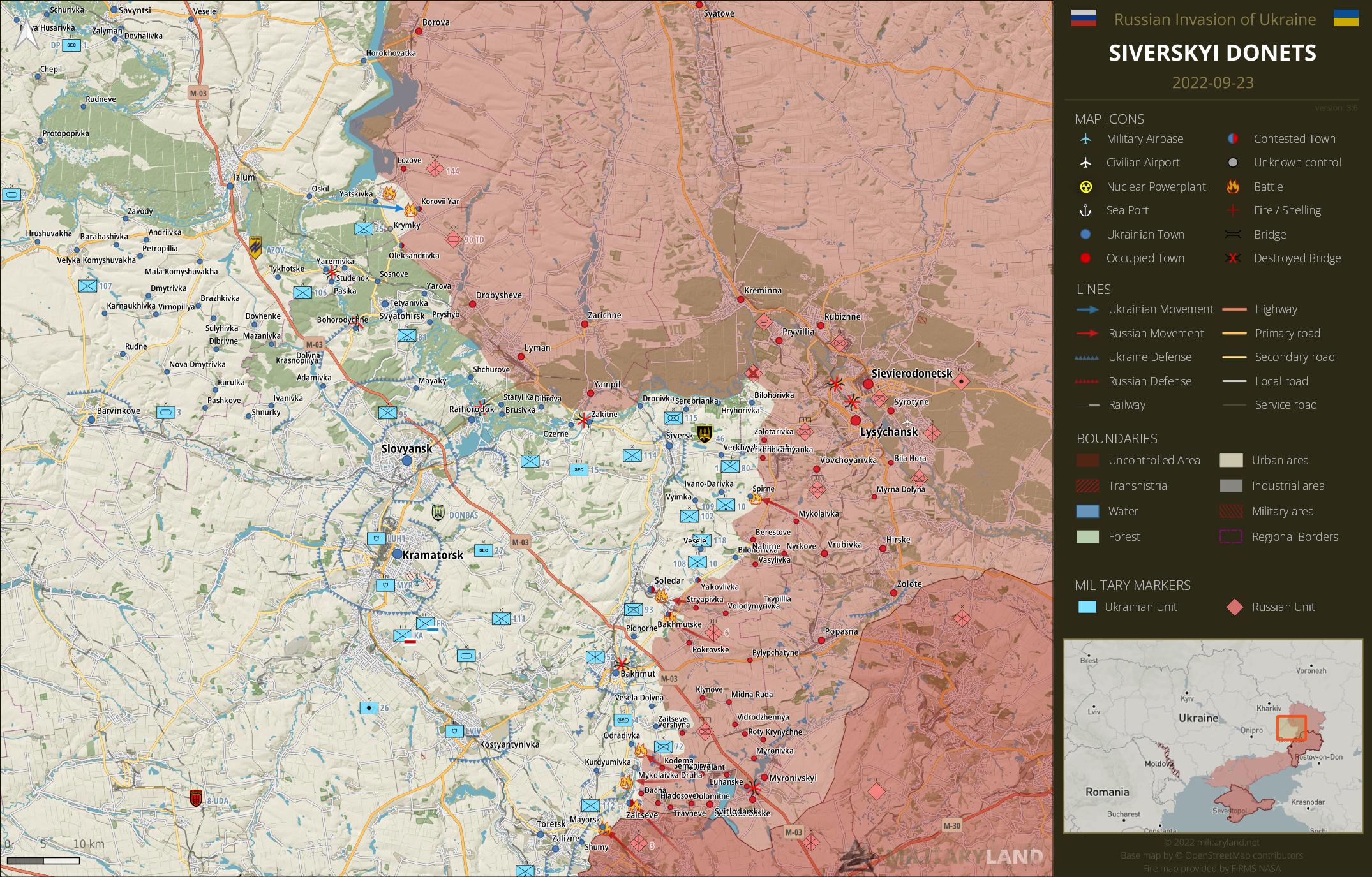 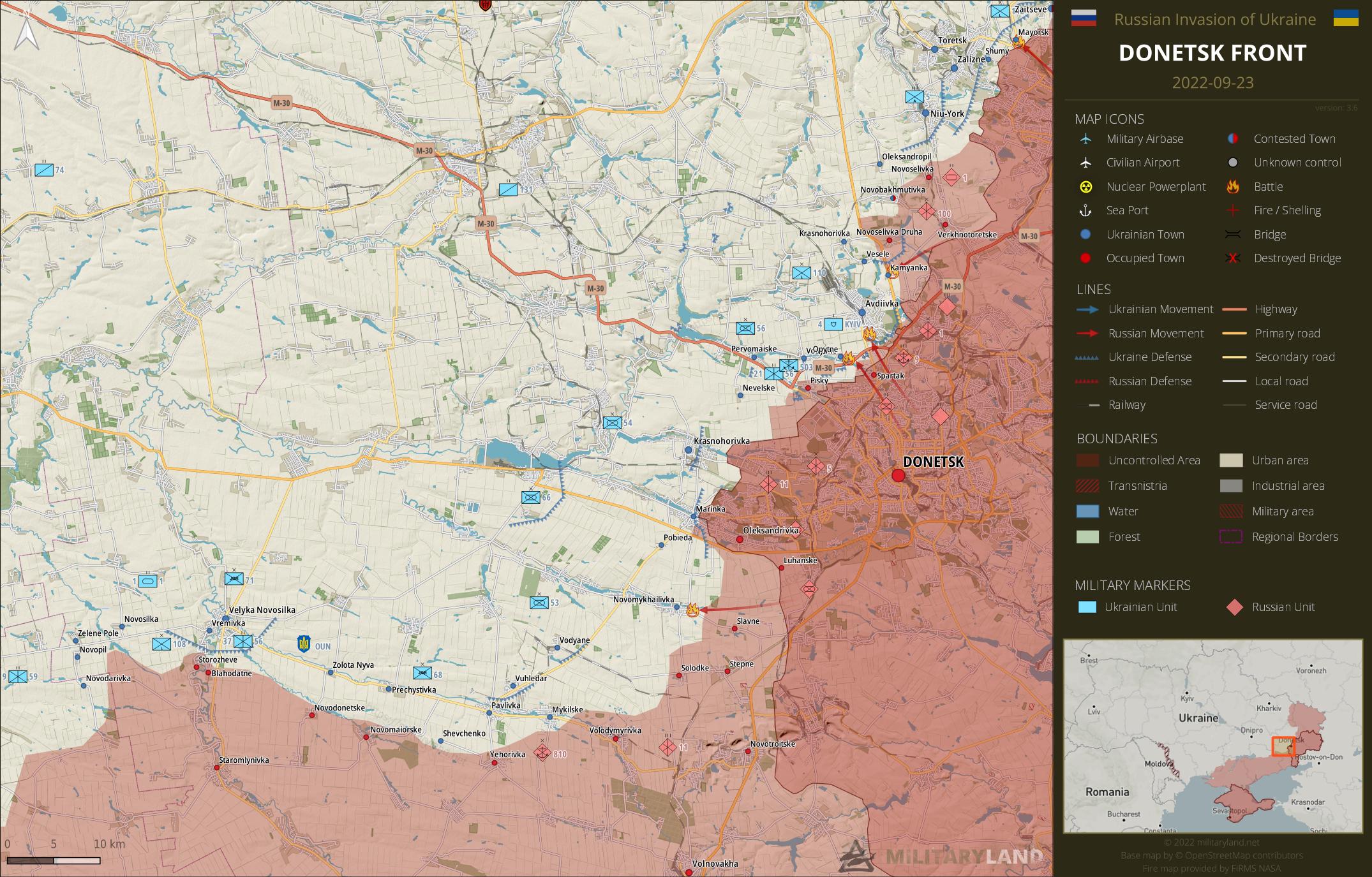 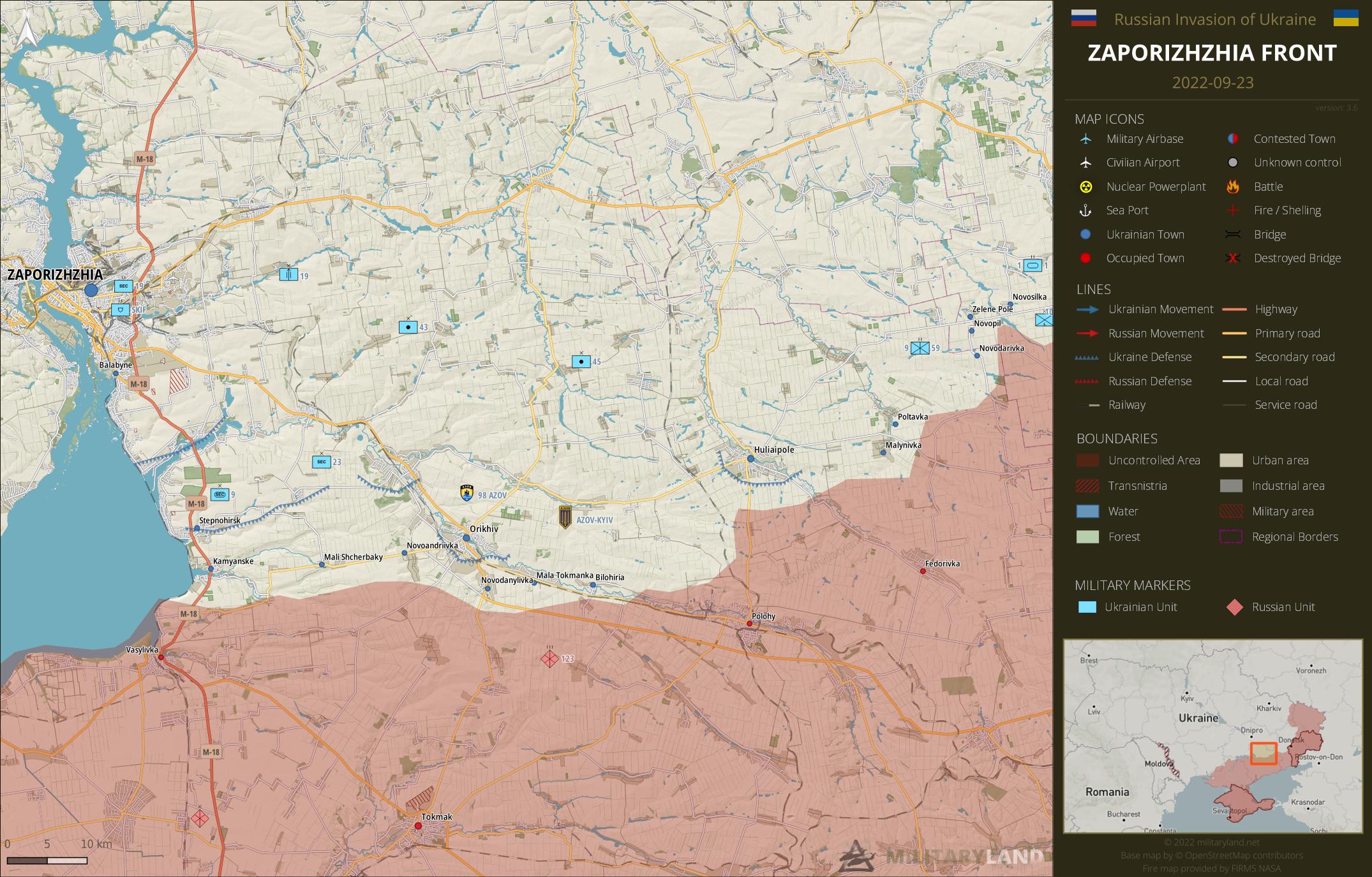 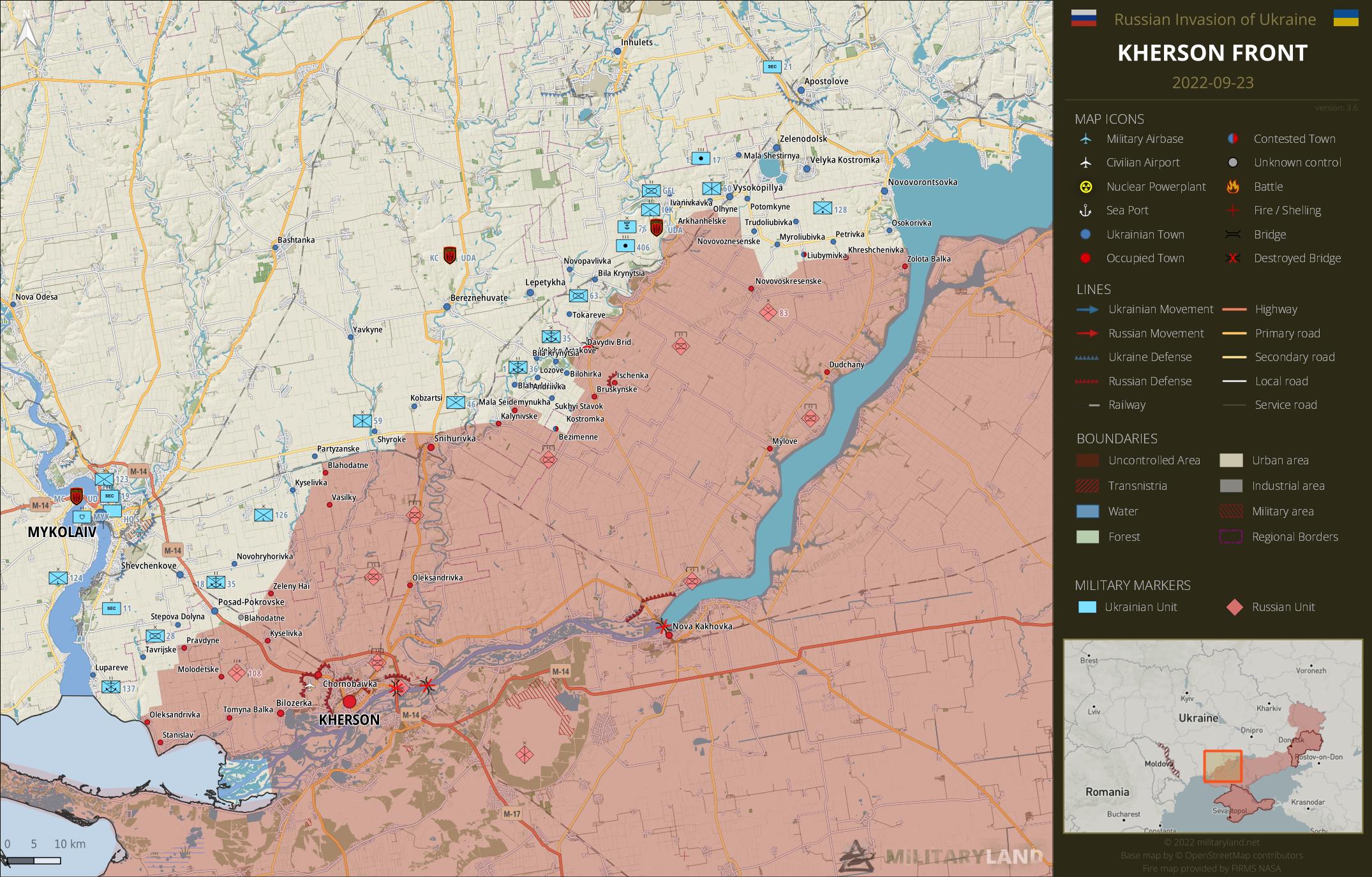 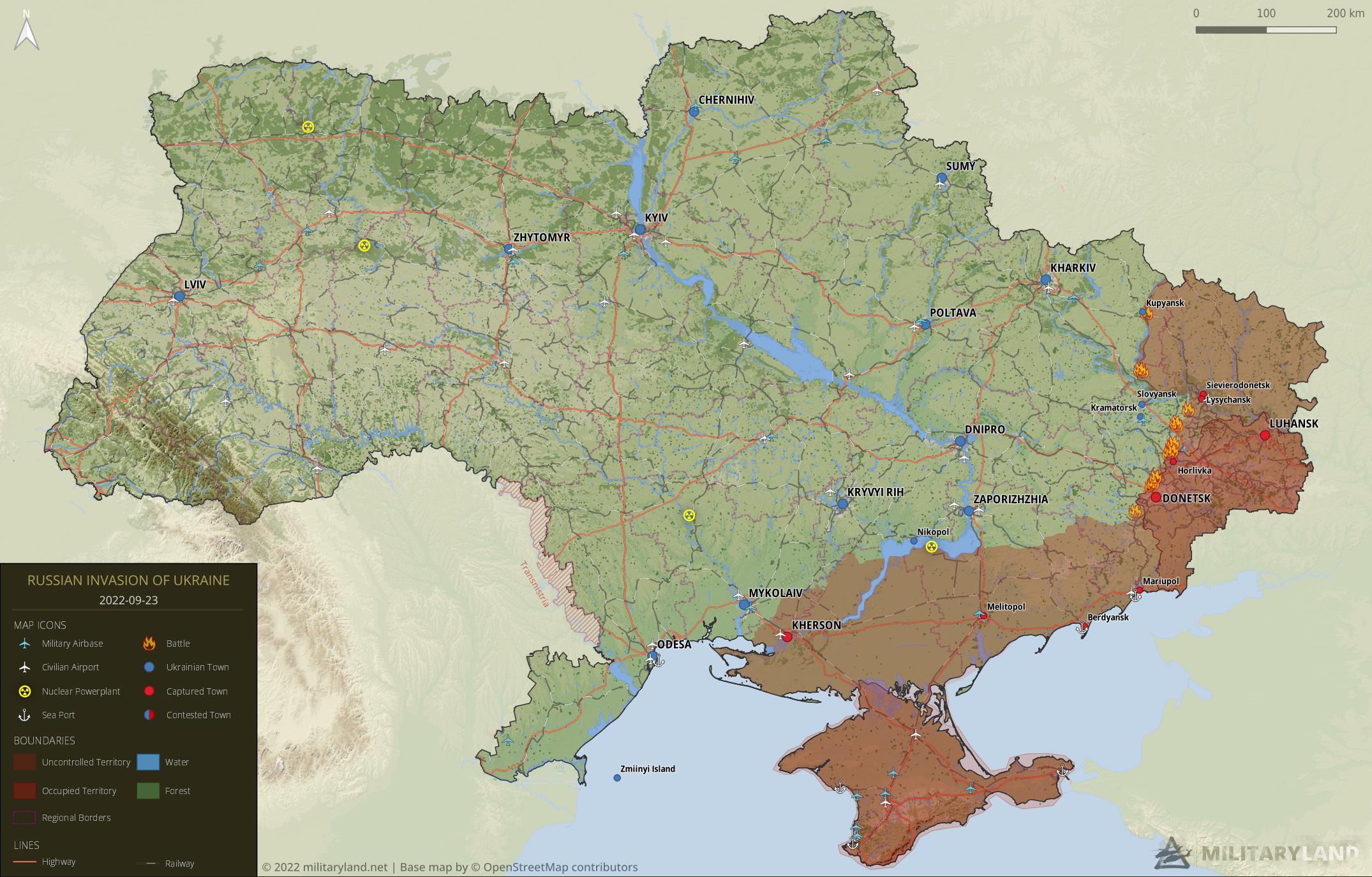 it will be interesting to see what happens if the first russian wave comes in, in about 1-2 months, this would be the first time where russia would have an numerical advantage over ukraine on the frontline.

i think ukraine is currently trying to do all they can to get as much land as possible till that happens.

They will not have numerical advantage with only 300k. And 300k will not be on the frontline in 2 month.

300k its just to try to keep donetsk and crimea . For the rest its to late.

300k will not be on the frontline in 2 month

with first wave i meant 40k or so troops. ofc they wont send in 300k troops within two months that would be fcking crazy

numerical advantage with only 300k

the esitmate of ukraine troops on the front is around 250-300k and russia about 200-250k if over the time it’ll increase to 500k then yes russia would have a numerical advantage.

Ukrain defender are more than 1M. Including everything. Army, territorial, policemen, … And they are still recruting and training.

For russian, i dont see recent serious estimation. But last Ukrain offensiv show that they have a big problem of mass .

Most of russian professionnal soldier are on the front (and before in training) since the beginning of the war. Without rotation.

all around ukraine yeah there are about 1 million, but on the front there are around 250-300k

That’s a dumb take. If they have 250-300k troops on the battlefield, while the rest of up to a million, is not, then that means that Ukraine has 700k-750k troops in reserve, ready to reinforce or rotate at any time. That is still a 1 million army, and Russians are still outnumbered.

but outnumbered on the front and overall is differant, you can’t push if your enemy has more troops than you do on the front, that’s the point.

YouNeutral? So no rubles for your delusional wishful thinking? That must suck for you. Go cry in your vodka about your failed imperialist/commie hordes. 140 million assholes living on the planet’s largest country (by far!) and they are all suffocated by the greed to want more, while they can’t even buidl toilets for their slaves. Pathetic fucks, you’ll all die, every single one of you.

Your numbers are way wrong. Ukraine has around 700k troops at the moment. Is unclear how many Russia have, they had 150-180k + 40k separatist at the start. They lost around 80k- 100k – KIA, captured and injured… with all the mercenaries recruited, and forced mobilization in DPR and LPR, they should be around the 100k-150k margin.

everyhing we can go of are estimates and what those two are saying.
ukraine once said 700k and once 1mln so who knows, but yeah 700k more likely
russia should still have around 200-220k on the front, don’t forget the 3 army corps, that was thrown in recently, also wounded does not mean dead, many wounded go on the front again, also i don’t think there are much POWs for russia as for ukraine.

if this were true and they were to be send to ukraine…. let’s be honest… not really good chances for ukraine

but i somewhat doubt that 1.2mln will get drafted, that would like almost completely more than double russian military forces.

if they were to be able to get 1.2mln on board this would mean russia would just escalate the war and use all it’s might to crush ukraine.

Not 1.2M at the same time. This number is for rotation.

there are some options how this will work.

Or they will conscript as many men as they can (even more than 1.2 million if they can), and send them to the front without rotation nor formation, as cannon fodder, *russian style*.

This is more likely. They don’t have the resources to equip and train.

That’s not how it works, 1.2 million would be a logistical nightmare for Russia. On top of that, they don’t have much equipment and the morale is low (especially in places like Kherson where there is a possibility of a lot of troops getting trapped). Plus winter’s coming 🙂

yeah the logistics for that required would be insane(maybe that’s why there is a new guy in charge of that). they do have enough equipment to give everyone a weapon (and artillery and so is also not a problem), it’s no like the soviet ww2 era. morale is not high, but i wouldn’t say that they are in this situation where they retreat, how do i know that? they didn’t retreat yet.

YouNeutral? So no rubles for your delusional wishful thinking? That must suck for you. Go cry in your vodka about your failed imperialist/commie hordes. 140 million assholes living on the planet’s largest country (by far!) and they are all suffocated by the greed to want more, while they can’t even buidl toilets for their slaves. Pathetic fucks, you’ll all die, every single one of you.

Didn’t retreat yet? You mean because they routed in kharkiw? And what did they do in kiev?

they still hold luhansk, donbas, kherson, zaporizhzhia and they’ll soon control it. they haven’t fully retreated and they are making it clear that they’ll stay.

It is just a matter of time, when they will retreat or rout further, like they did befor. The professionals and volunteers couldn’t hold the line. the forced will do it even less.

Its seem to be the secret number autorising in this decree. But if they want mobilize 5M , they just have to sign another decree.

Official say 300k. Wait and see how they will managed with 300k before to dream to 1M. Russian problem of uniform/shoes/rifles/food doesnt disapear with mobilization.

300k More russian fighting troops need about 900k for logistics, That makes about 1,2 million. The ukrainian number of above 1 million has the Same backround.

Its not about numbers but morale and will to fight for the homeland. winner is the one who has more.