Ukrainian success on the battlefield forced Russians to order a withdrawal of its forces from Kharkiv Oblast. The enemy wasn’t able to keep up with Ukrainian progress, and the reinforcements didn’t arrive in time. Russian forces retreated in panic, leaving hundreds of equipment and tons of supplies behind. Ukrainian Army thus not only liberated a lot of ground, but also captured equipment worth equipping at least one new brigade.

Russian troops continue to have a local success near Bakhmut, where they managed to capture Kodema after weeks of fighting.

Note: I have a vacation next week. The next summary will be released on September 19, 2022. Thank you for understanding. 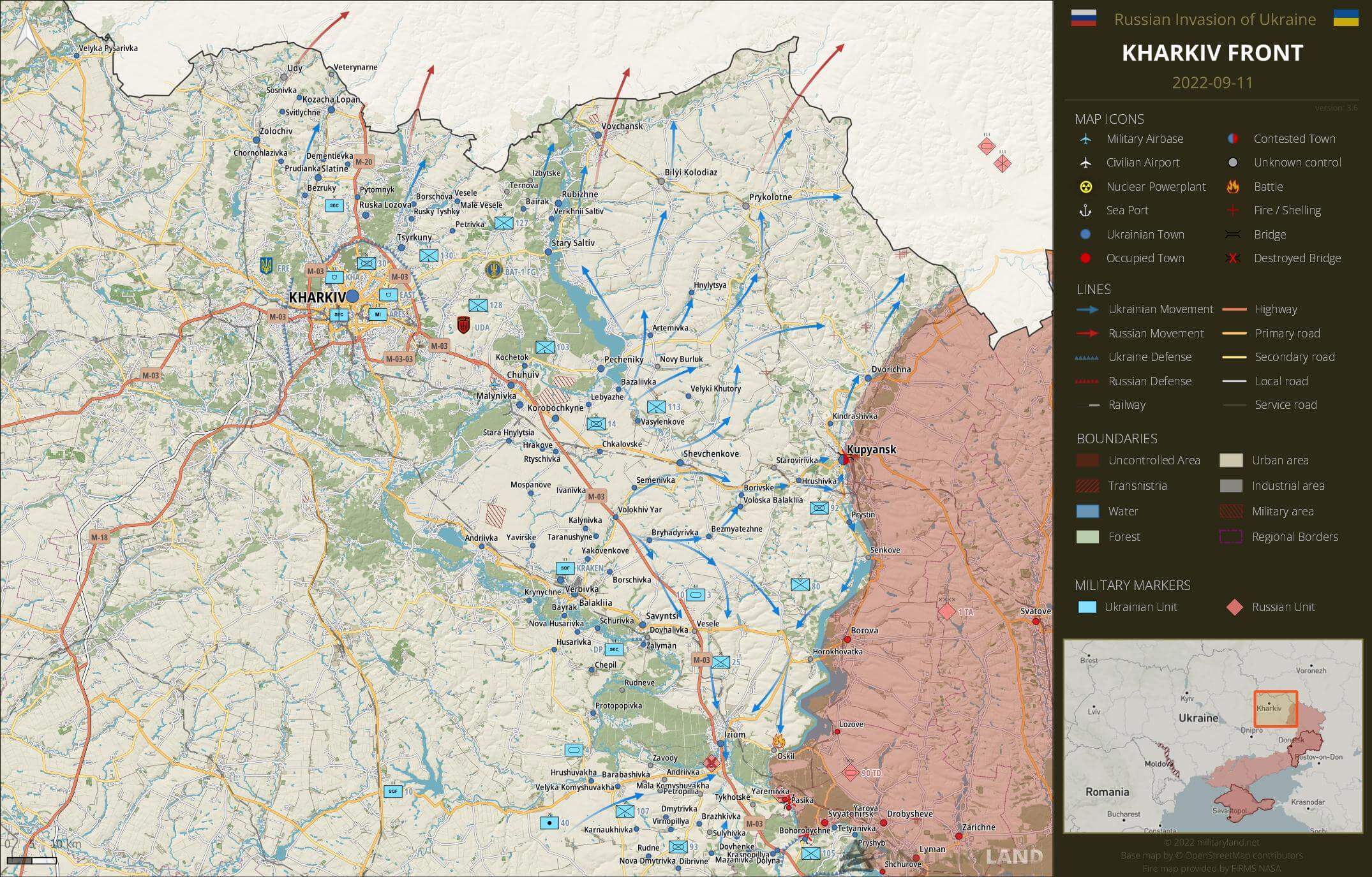 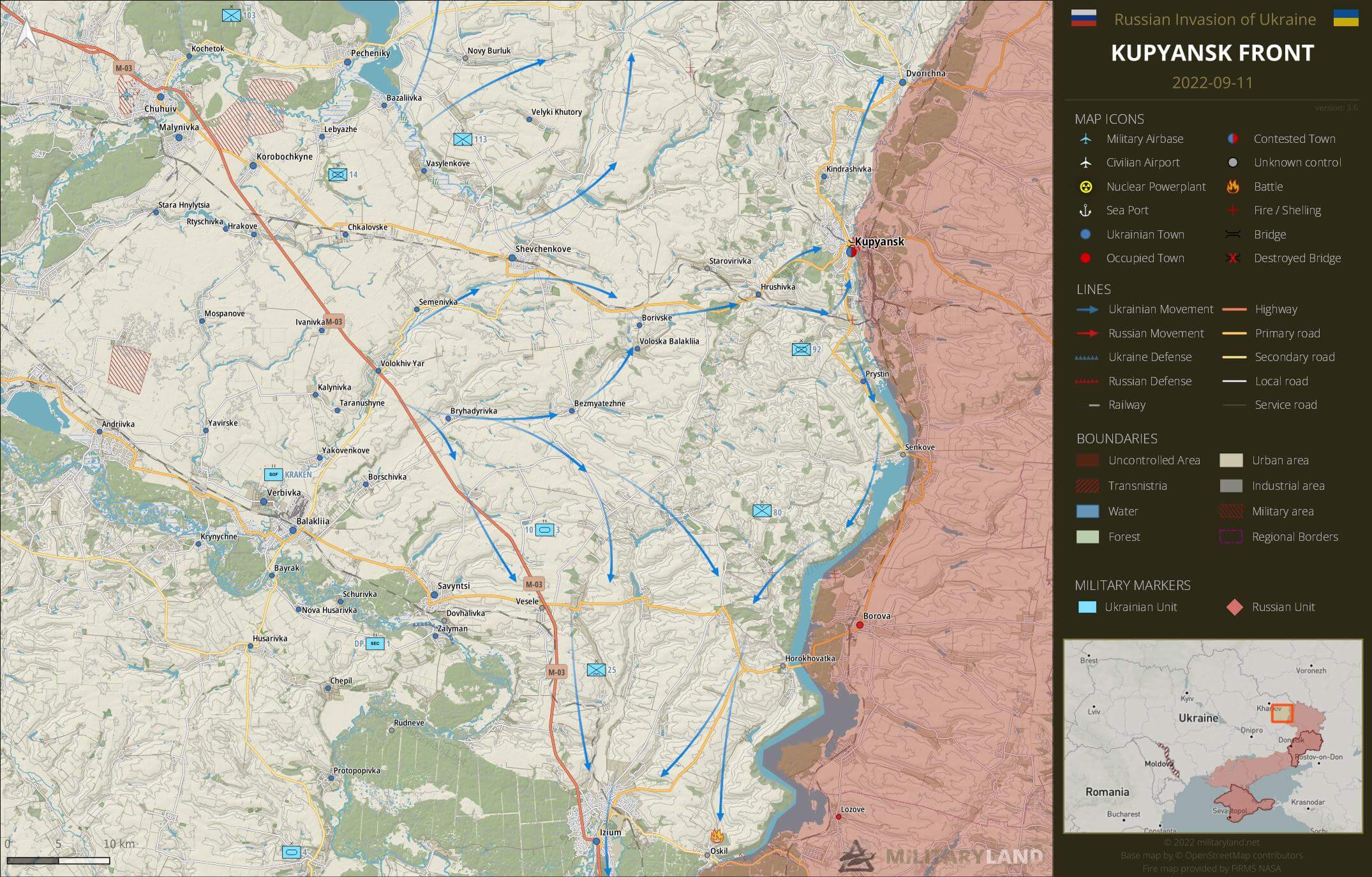 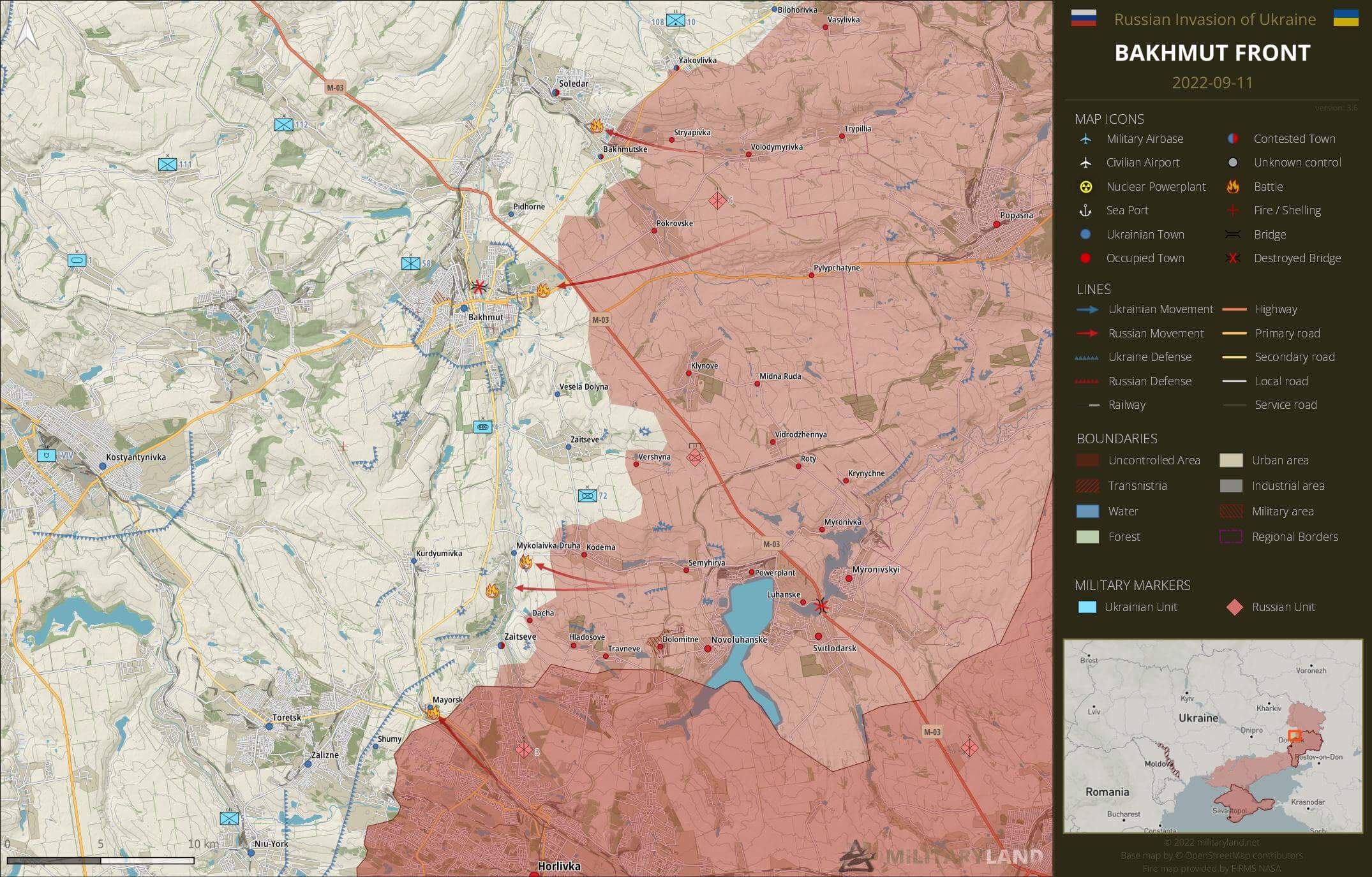 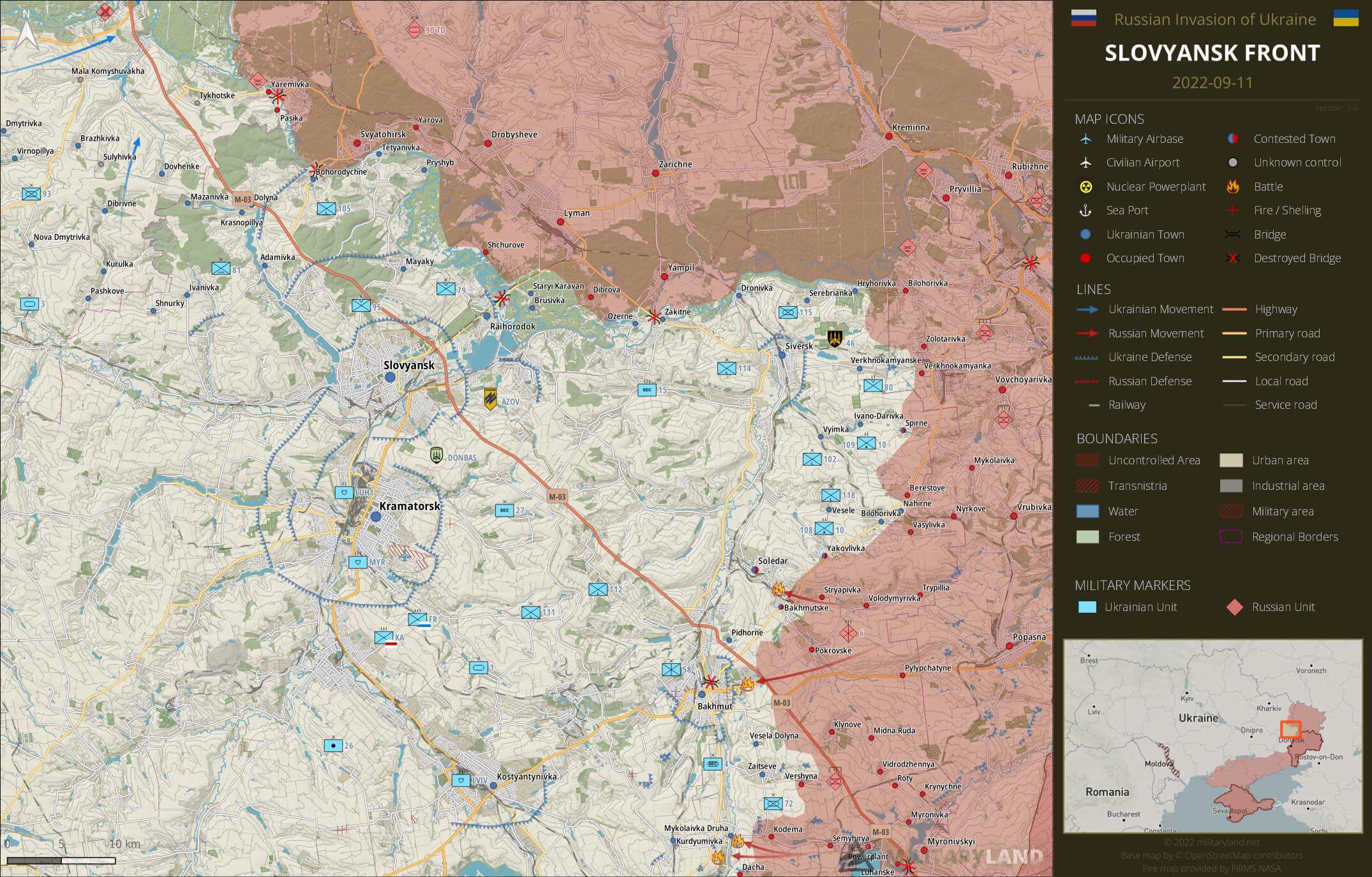 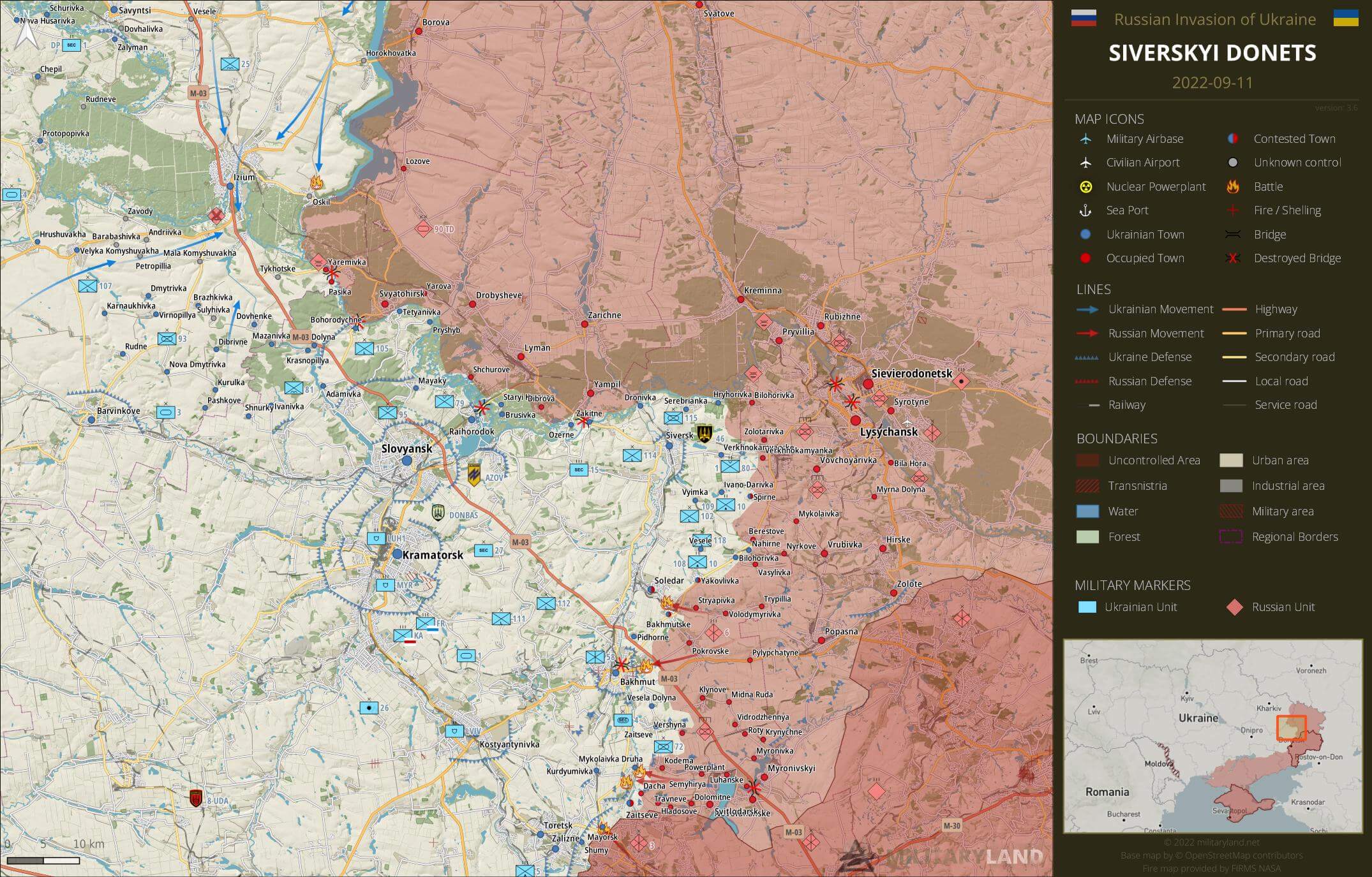 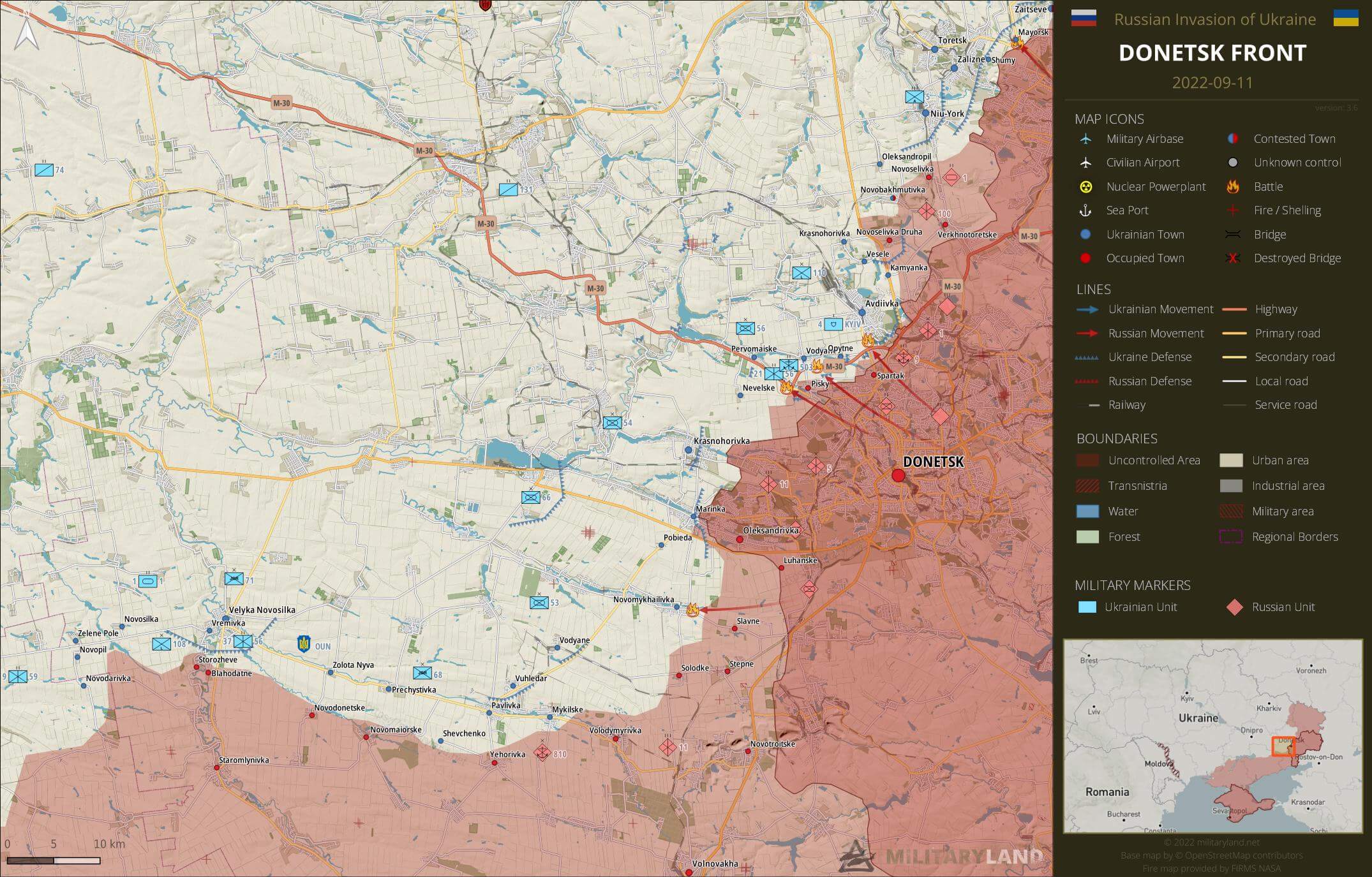 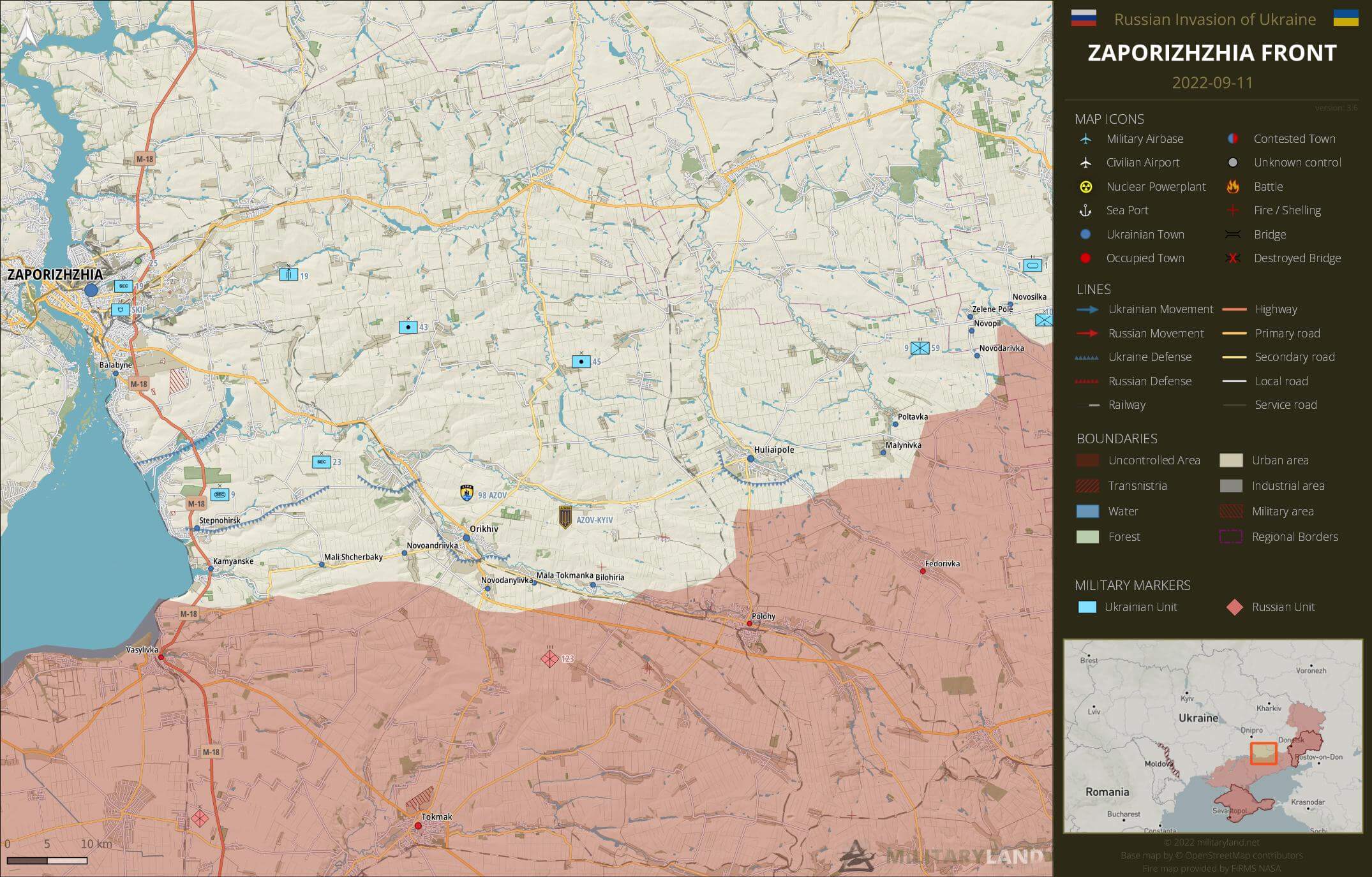 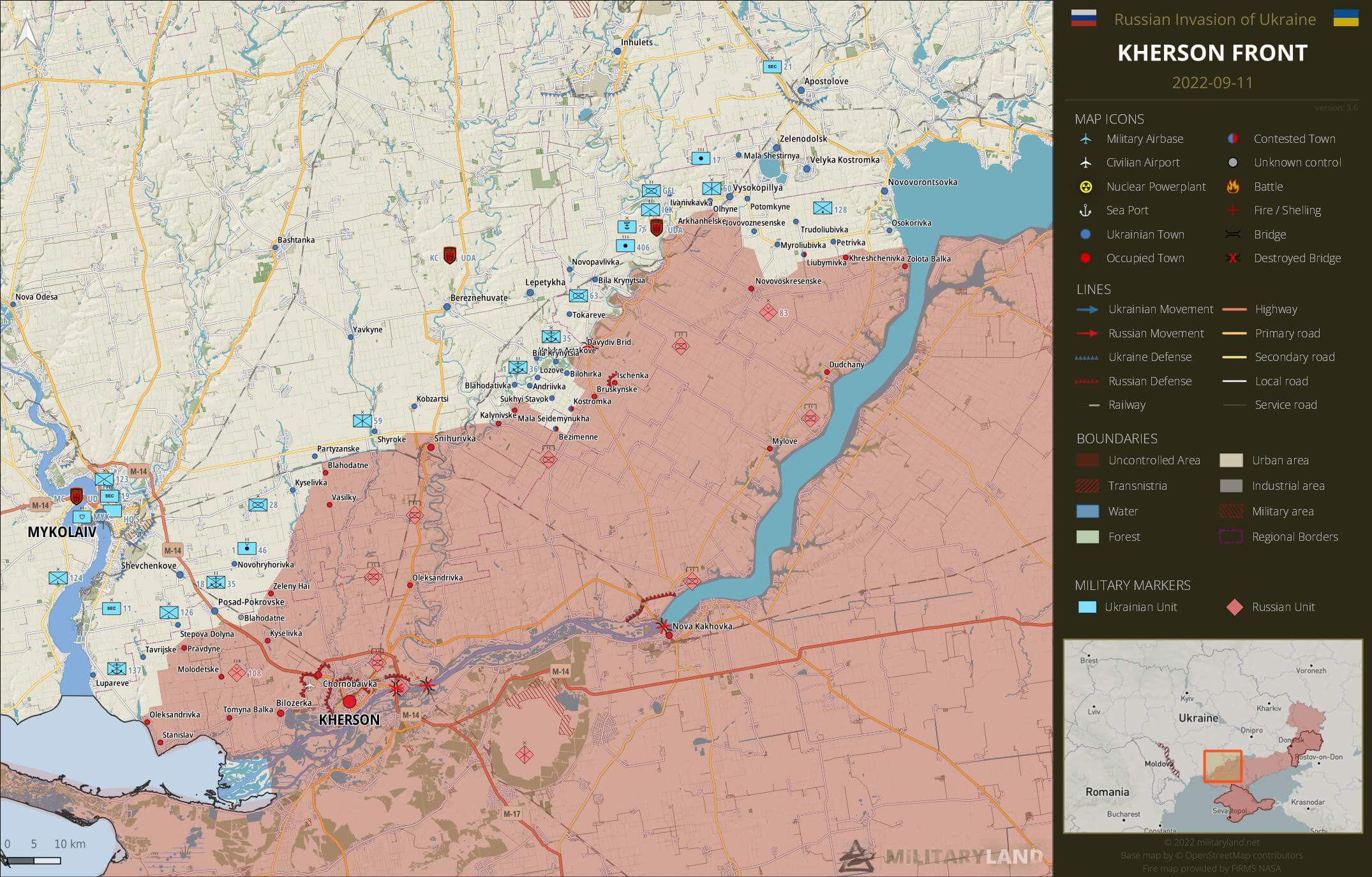 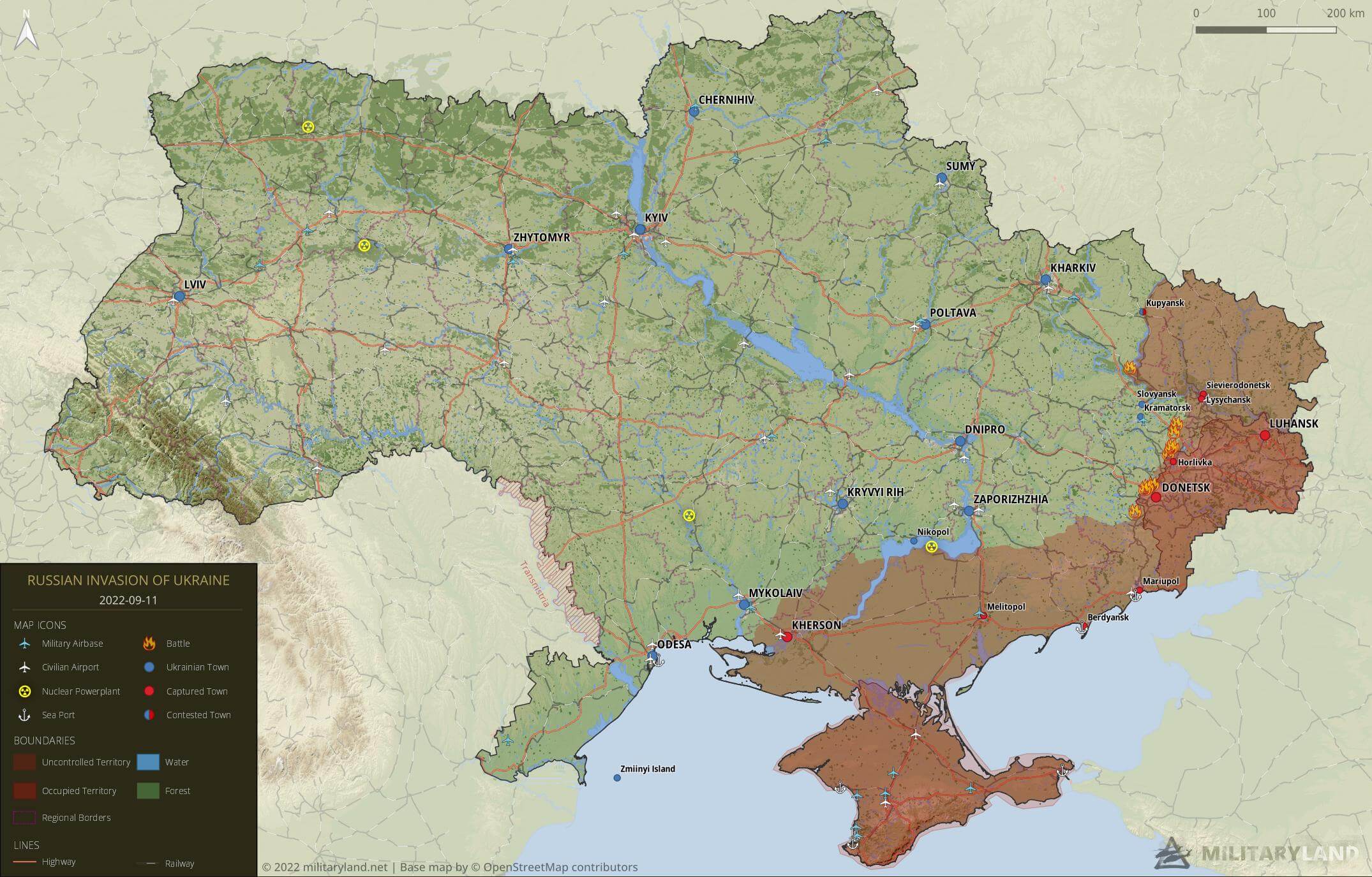 Did the author guy get hit by a stray artillery shell or something?

He’s on vacation until Monday.

What would happen if we invaded North of Kharkiv? I am no armchair general or politician.

Yeah Sure
Reply to  Guy Osborn

You mean invade Russia?
Putin would order a general Russian mobilization because the Motherland is being attacked and you’d be ground to dust by millions of Russian troops.

Anonymous
Reply to  Yeah Sure

Ok, how do you want to equip these millions of troops? How will you gather them quickly, form units out of them, not mentioning any training?

stupid and pointless speculation loved by Russian trolls.
There is no point of ‘invading’ (besides sabotage etc.) while the ~ 1/4 of the country waits for liberation, even if someone is brainlessly ignoring the consequences. Creating deterrent ability for Ukraine (and in general, for the whole East/South endangered by Russian “make empire again”) does not involve entering RF territory.

I was just asking, sorry. I certainly am NOT a Russian troll. If you look at the link, you can see I was an aid worker helping Ukrainians and Russians escape the war zone. https://www.telegraph.co.uk/world-news/2022/04/27/like-bonfire-night-british-teacher-evacuates-elderly-donbas/

I am sure he did not meant you .

sry for kinda overreacting.
Such kind of narrative plays directly into Russian hands and is present among some overenthusiastic and some malicious ‘content creators’, Ru pro-war crowd uses this “defending the Motherland” scheme to attarck attention and rising the support . So – stay away and every time such idea comes around be on alert.

you mean Russia ? Putin would likely use Nukes to cancel every life forms from Ukraine , then NATO will ….then china ….end of the story .

With the way things are going are you sure the guy at the button will listen to the command? Nuclear winter for everyone involved is hardly a great solution for anyone involved.

Nah. Russia has only two cards left to play: Mobilization and Nukes. It wont play the second over i.e. the battle of “Belgerod”. It knows the card is not as strong as Russia wants the rest of the world to think. And, if directed at Ukraine only, it will most likely be met with Nato convential force as Russia is weakly defended and nuking Ukraine will show that their nuclear power is limited.

Besides, one can think everything of China, but it wont end the world with there limited arsenal of nukes. It would be either Nato and / or Russia. But I doubt the latter will have enough working nukes to destroy the world.

The new defense lign risk to be difficult to hold.

Deepstate map has grey areas around Borova and Kupiansk. The collapse seems to go on…

I waited for confirmation – Svatove has been abandoned!

Does not say much about the frontline. I heared that the russians left and the LPR milizia stayed.

You appear to be likely correct. And the flag raised in Kuzemivka was probably done by partisans. There are battles ongoing east of the Oskil river though.

Wait, really? Svatove is several kilometers east of the Oskil River, kind of behind Kupyansk. So if the Russian forces have fled even Svatove, that implies that the Russian attempts to hold a new line at the Oskil have likely failed. Is that the case? Is Kupyansk still contested?

It is just as possible, that some troops are fighting in Kupyansk or even holding the whole Oskil river, while others flee behind them. Foog of war…

You appear to be right, we only know that the Russian military left Svatove with their vehicles. The LPR may still be there? This seems more likely than it being completely abandoned, given the ongoing fights east of Oskil river.
The Ukrainian flag has been raised in Kuzemivka, but this was probably done by partisans.

The Russian military has left Svatove. It seems the LPR is still there.
The Ukrainian flag has been raised in Kuzemivka, but this appears to have been done by partisans.
There are battles ongoing east of the Oskil river.

i think that most russian units left, LPR holds the line (they probably still have some russian untis helping them out particulary in lyman, where they hold surprisingly good), russian units on their way to donetsk to reinforce and help out.

having less ground to cover helps russia quite significantly more troops for offensives in those areas. their moral i would assume is a bit damaged tho.

A lot of progress in Kherson, though it’s blacked out, so no details.

There’s rumors of ongoing communications between Russian units and the Ukrainians in the area, and also that fighting has broken out between Russian and Kadyrovite units, since it’s their job to kill those who might surrender or retreats.

The only details that were given yesterday by the Ukrainian government was that they’d made progress of between 2 to a few dozen kilometers at different parts of the Kherson front, and more villages have been liberated today.

There’s activity from both sides in south central Zaphorizhzhia, probably related to the crucial importance of Tokmak.

or read ISW if you don’t mind this lag as it’s comparable. It’s daily and you get far more details.

Well, at least seemingly, if the author actually took some time to ban them, then Kudos, though he waited months at best even if they didn’t leave by themselves.
I’ll be back here occasionally to advertise Ukraine Live Map and ISW since this place is slower and less detailed than the two, and has a former history of allowing genocidal Russian posts about nuclear war.

Have a nice vacation! thanks for the work you do!

quite interesting development, during this last week, very eventful.

massive power outage throughout ukraine, i think it’s the first time that russia is going actively so strong against water and power supplies since the war started, seems like they are quite pissed about kharkiv, probably won’t be the last massive power outage in ukraine.

I’m curious what the point of these power outages is? At first glance they seem aimed at the civilian population (I know – par for the Russian course) but is there also some military purpose? And – is this as a result of shutting down the nuclear plant?

i think the point is to make people… well… ”suffer” with the incoming winter.

IDK how the military will struggle with this in major ways, but they can’t really use trains no more so thats something.

the attacks on infrastructure probably caused the shutting down on the two NPP, but i also don’t know how, some cables were hit or something, might get repaired soon, but i’m no expert.

Breathtaking. Next up; everything on the west bank of the Dneiper?

the success in kherson is not as amazing as in kharkiv, because russia was prepared for that, it basically ain’t moving no more.

with russia having more man now for other fronts we might see some more movement during the coming weeks.

i think the war has just now really begun, well at least it will really begin if russia decides that mobilization is actually really helpful in war.

The Russians aren’t mobilizing because they’d have to take resources from the domestic forces they use to keep Putin safe in Russia. The main goal of Putin is to keep hi!self in control. If he does mobilize Russia’s reserves they’ll realize how outgunned they are and it will hasten Putin’s downfall. Where are the reserves of Russian advanced weapons that will front up on American had missiles?

Mobilization would have little to do with internal security, but mobilization would be impopular and weaken Putins position. He’d have to admit the war is not going well and that it’s actually a war, their propaganda is really messed up.. Also there’s the practical issue of training mobilized forces to adequate soldier levels or throw them in as cannon fodder into a war of aggression.

Putins regime from what i can tell is extremely stable, so it doesn’t matter if he gets unpopular, there is no chance to overthrow him, some russian politicians tried that… they are probably in prison now.
yeah mobilized forces are not as good as normal troops are, but they can hold the line and thats what russia needs, holding the line while the good ones do the job.(evident by ukraine)

the only ones who can overthrow Putin are his generals . they are not willing to sacrifice half their army in UA ,they coulb be lot more usefull internally .

Wasn’t there an assassination attempt with a bomb just a day ago?

i am not so sure abt it . modern armies are professional , this war also showed how much important the willing to fight and die for your country is , professional soldiers are skilled , and more prepeared to withstand some heavy fightings that we have seen happening in UA .

sure, they are mobilising Dirlewanger divisions now.

Some solid bridgeheads east of the Oskil would be nice, or even use the confusion for more in the north East. After These matters are settled i would Look at a cut south to the coast. The Right Bank is Great as it is.

But yes, out of the russian point of view, a retreat from the right bank would make a lot of sense. Especially if done befor ukraine trys to cut south.