Ukrainian offensive in Kharkiv Oblast is progressing at steady peace. The advancing forces reached Kupyansk and liberated a number of settlements along the way. Russian Army is gathering all available reserves to stop the Ukrainian offensive at Oskil river, at least. There are many rumors currently floating on Twitter and other social media, but we have to wait on for confirmation for many.

Russian forces, likely due to shifting its forces towards Kharkiv Oblast, decreased the number of attacks everywhere else. They have a minor success in Donetsk Oblast, but compared to Ukrainian offensive, it’s not worth mentioning. 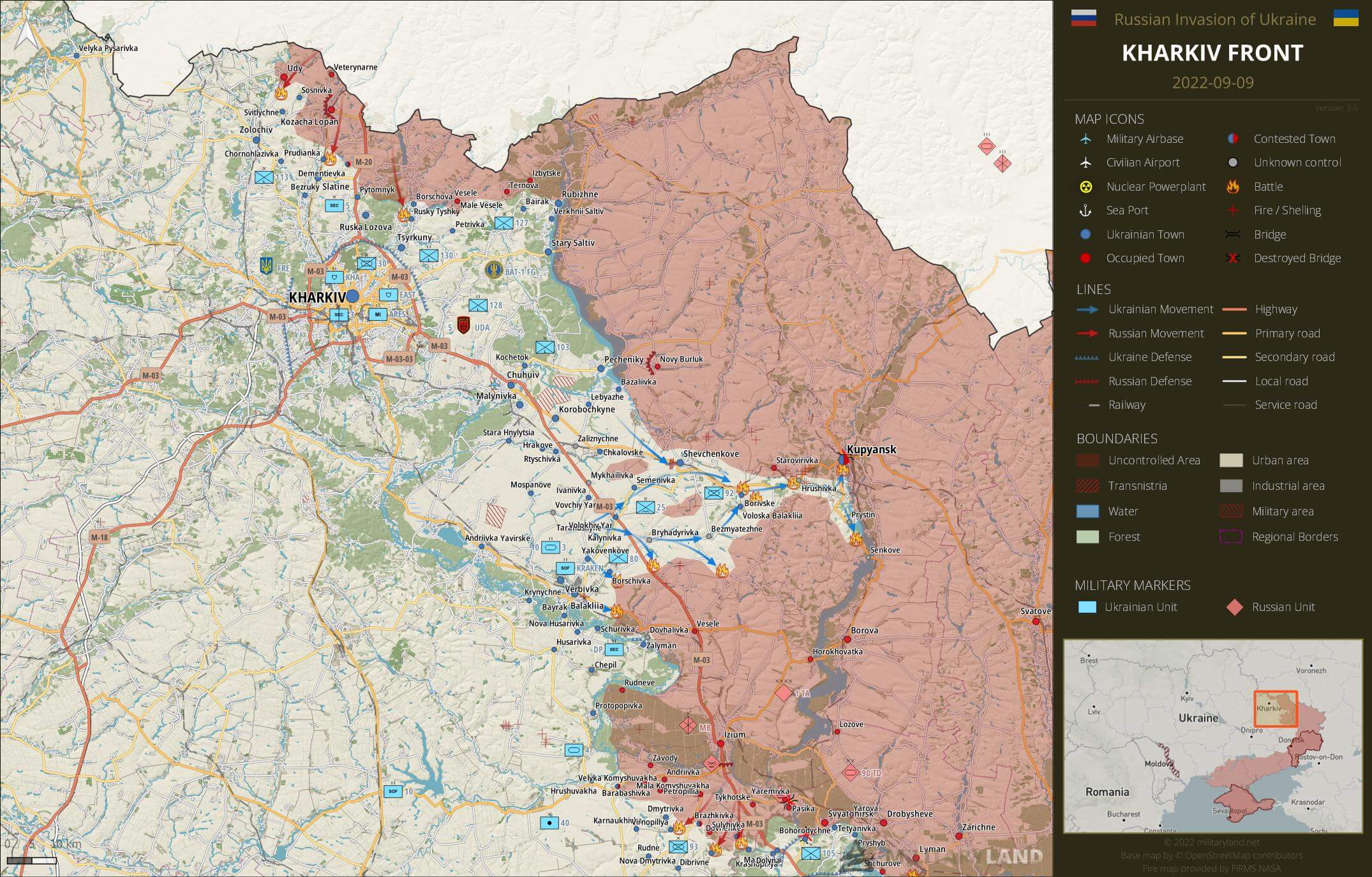 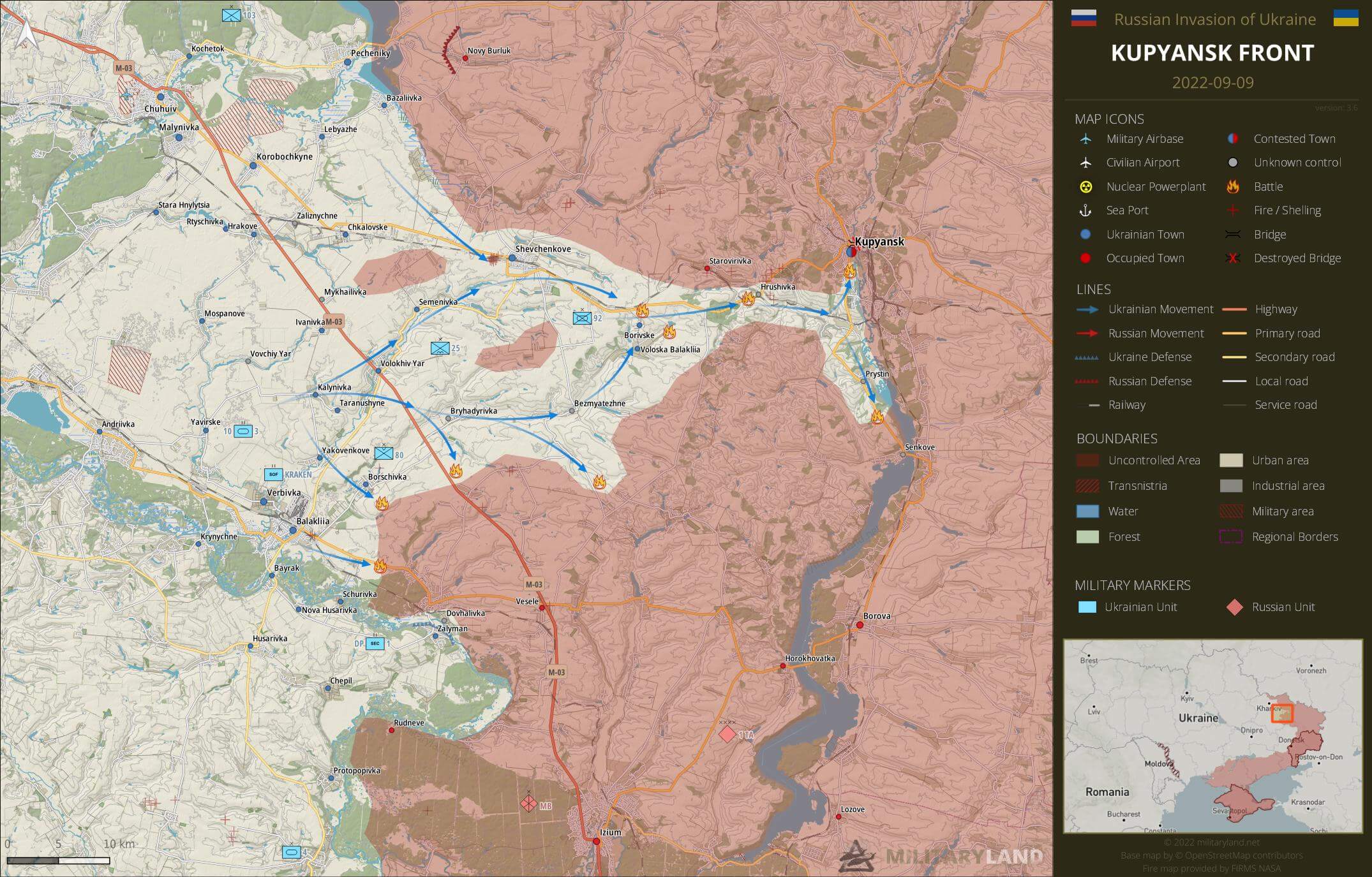 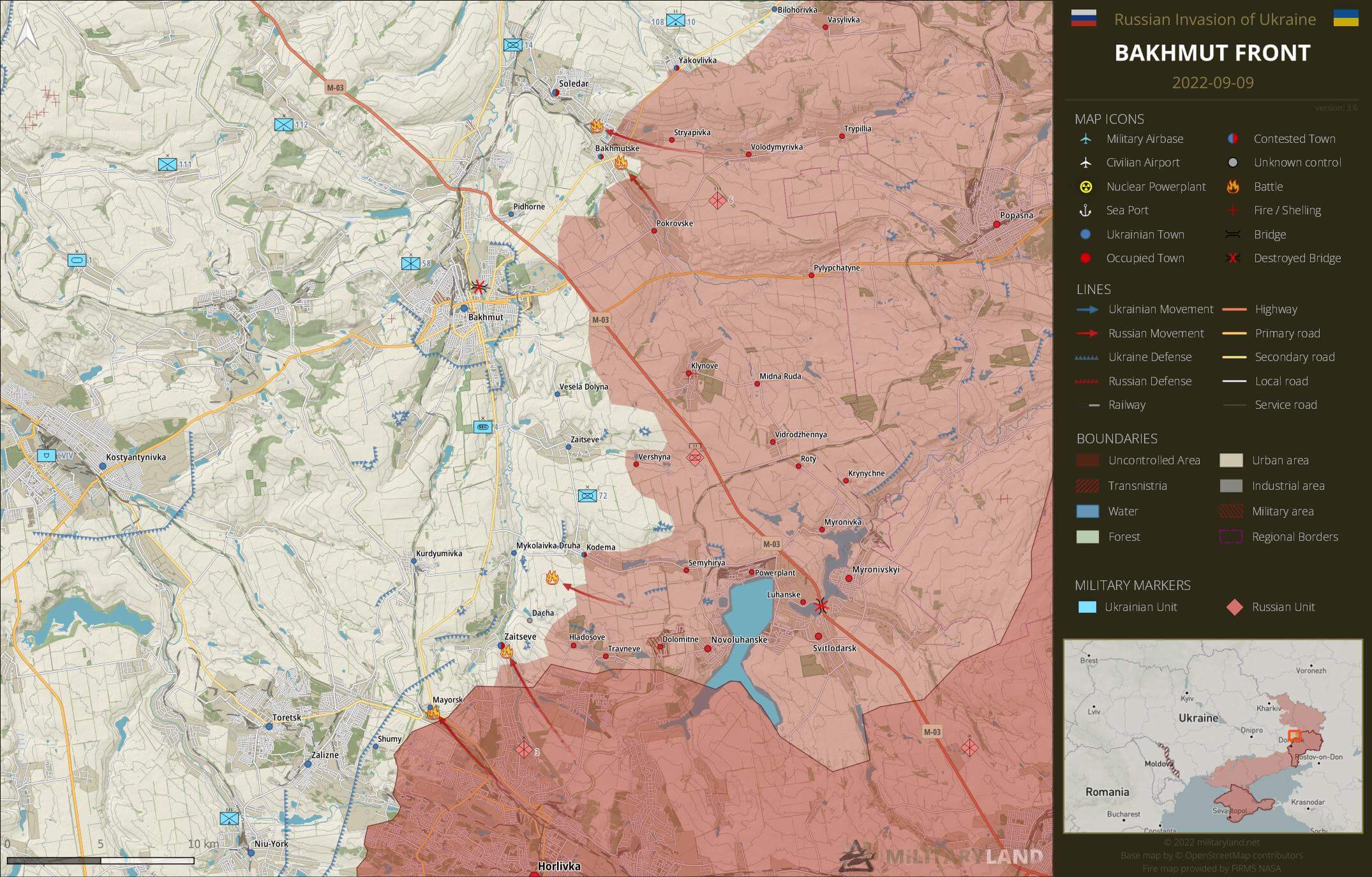 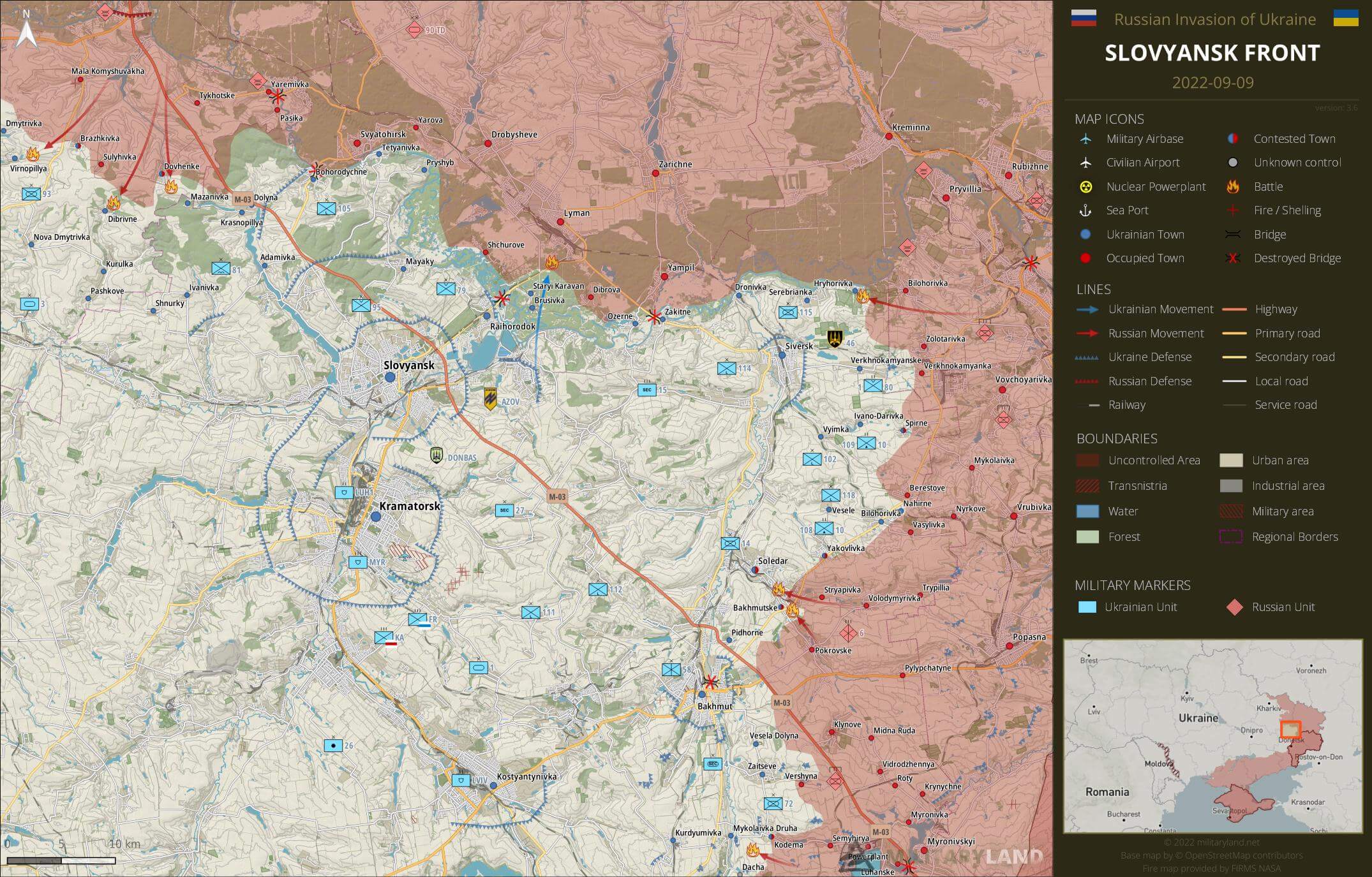 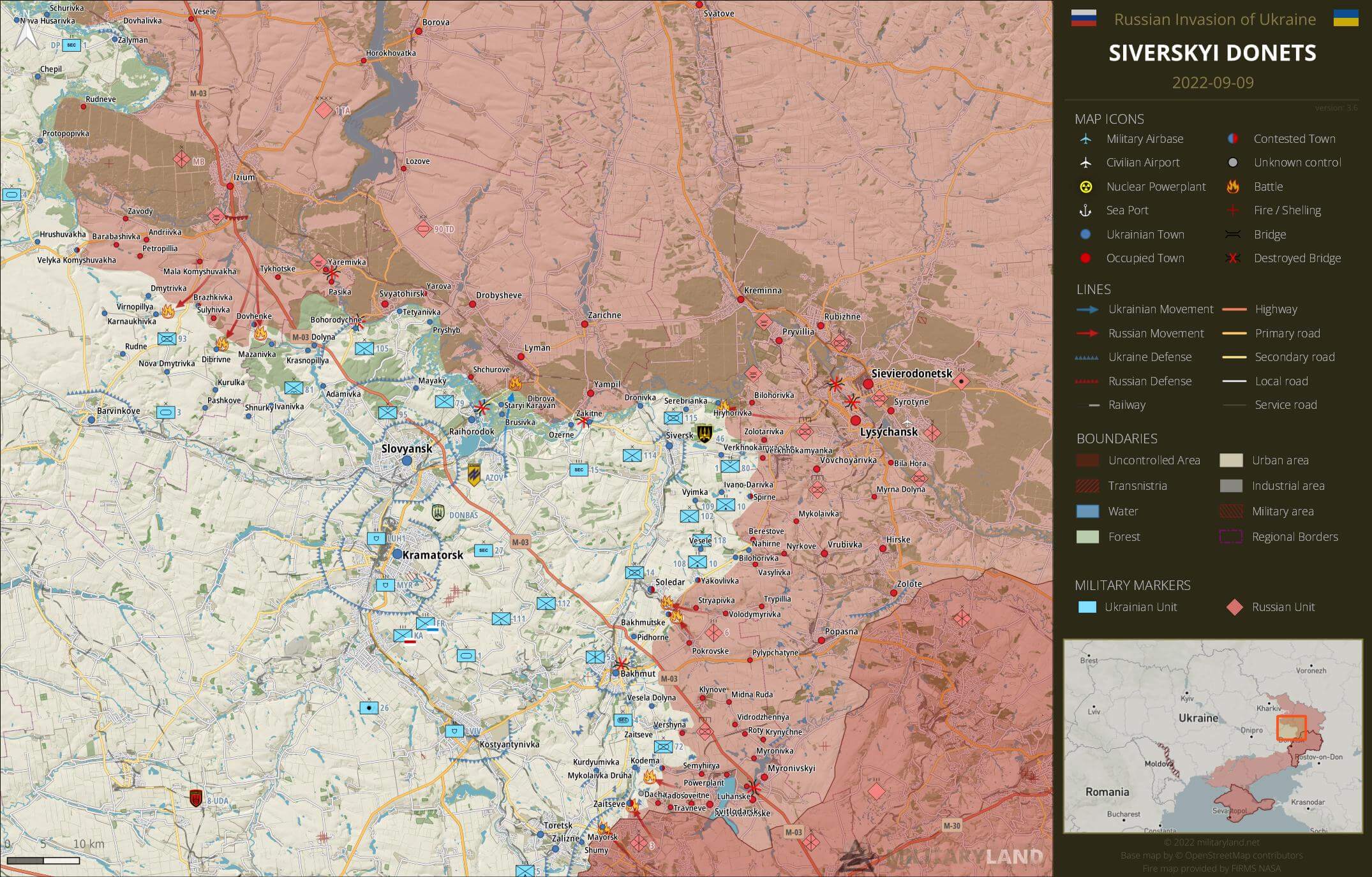 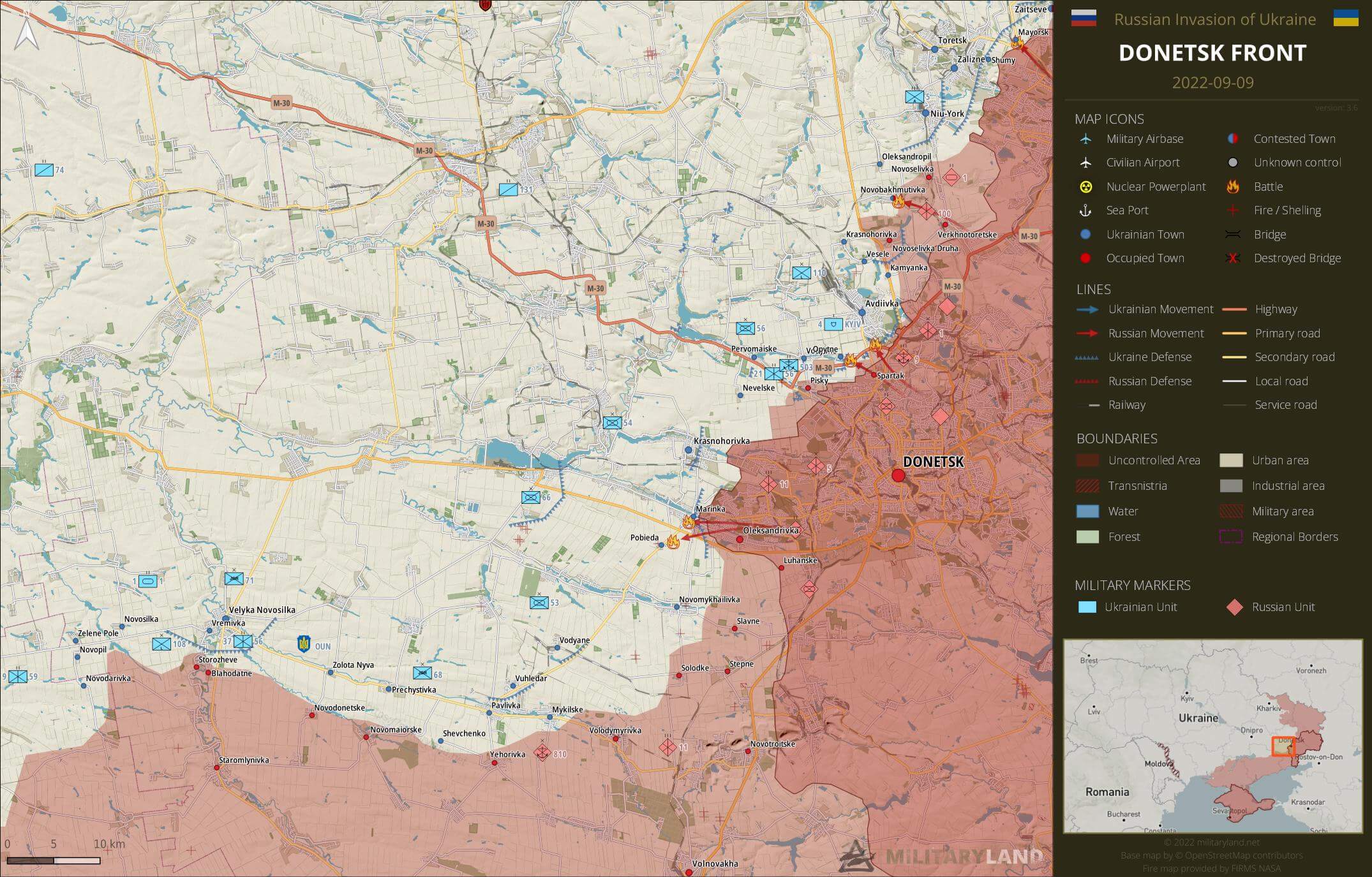 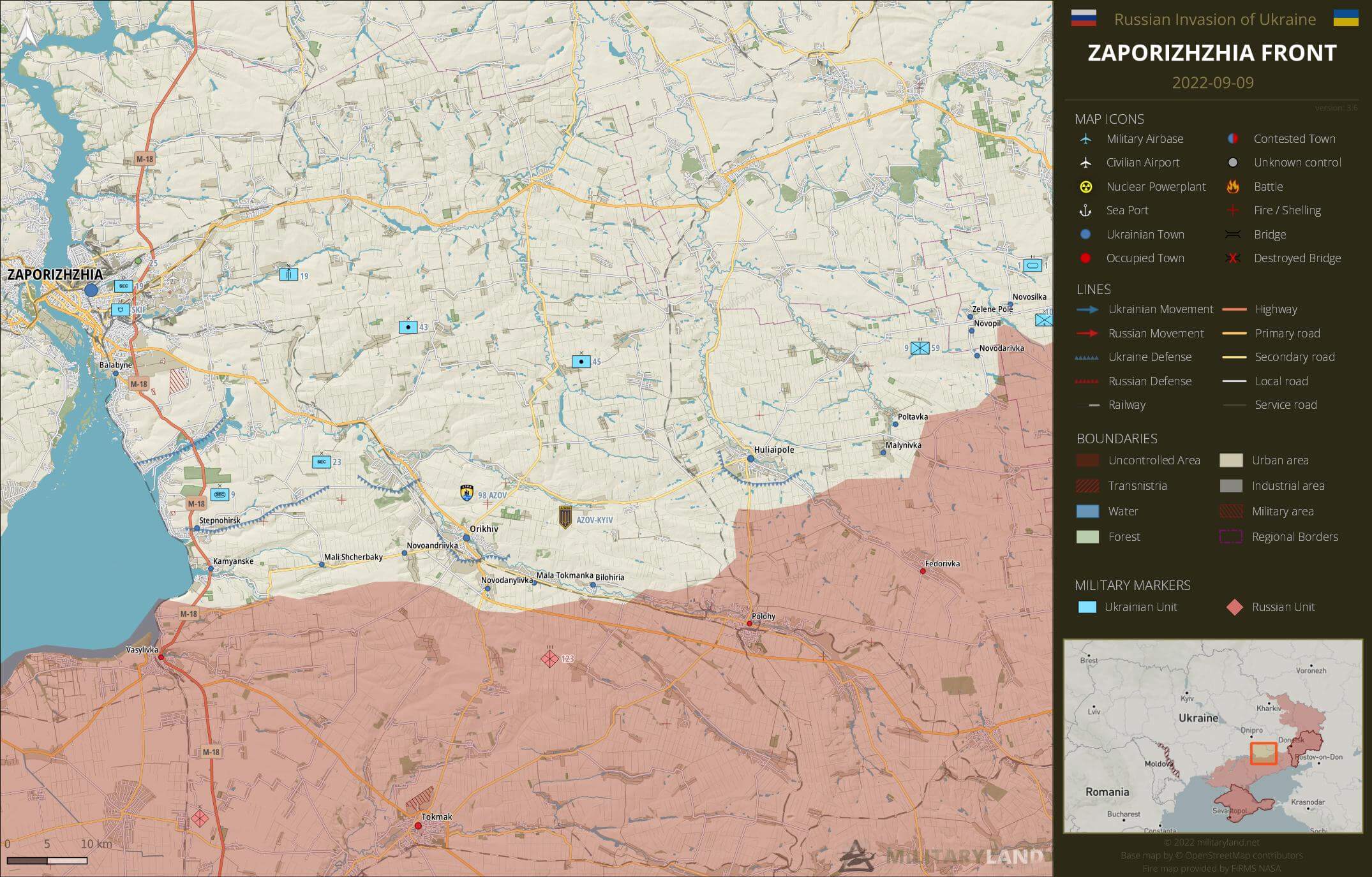 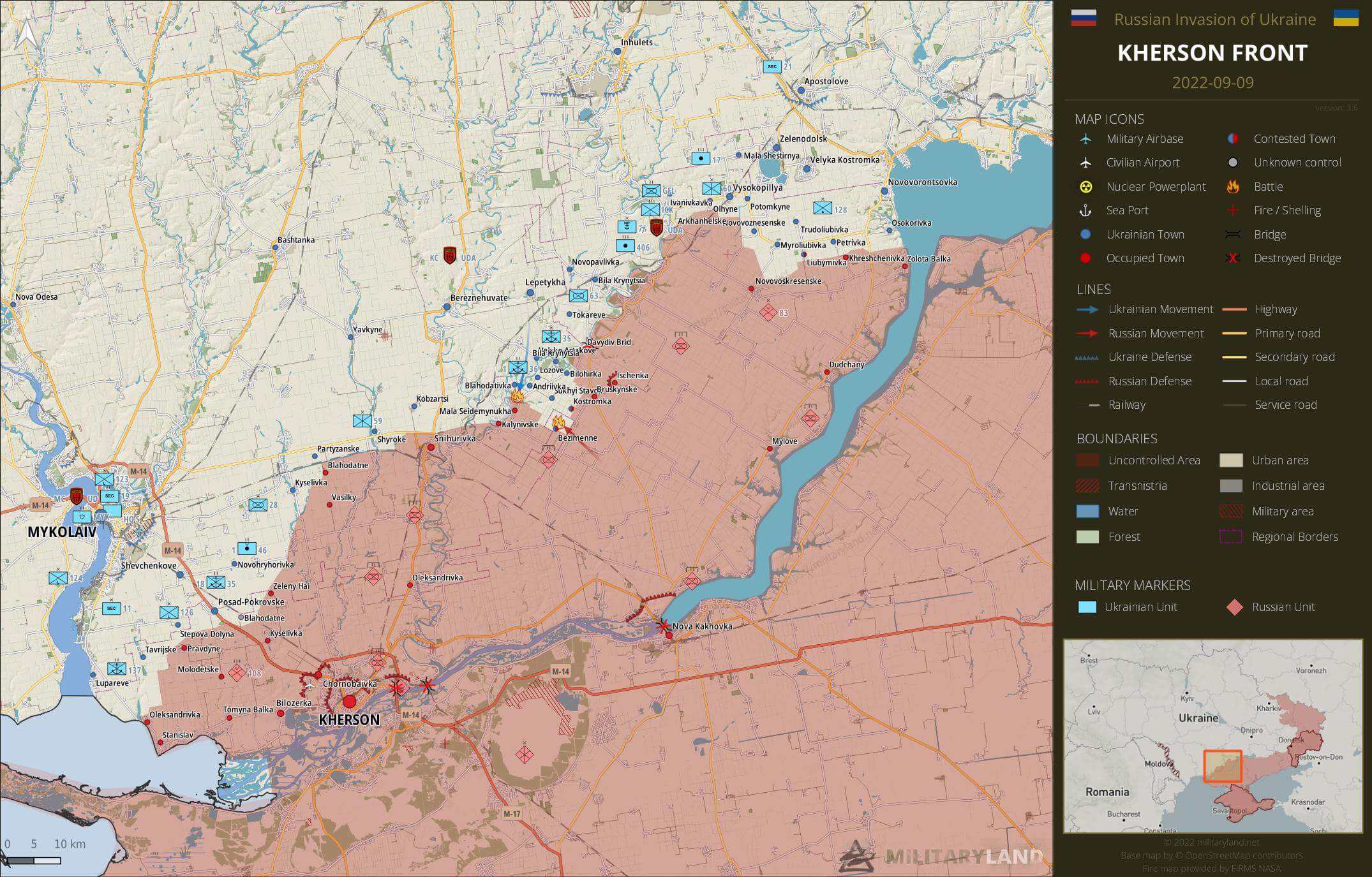 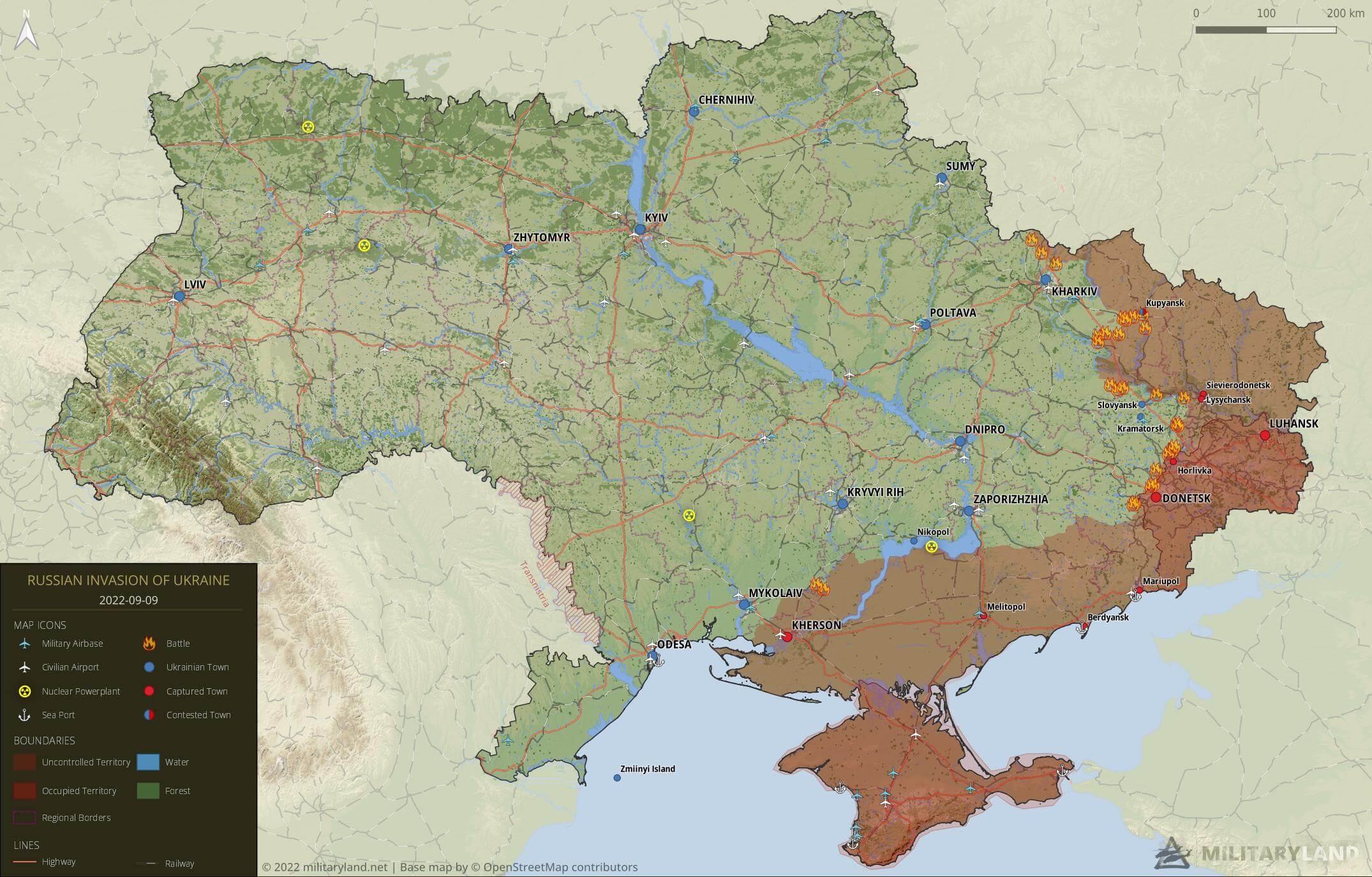 Is it fair to say that Ukraine is recapturing, in two or three days, territory that took Russia two to three MONTHS to take? If so: WOW.

I look forward to having Ukraine in NATO. They have earned their place.

I think we can safely say at this point that this is the “Sputnik moment”, indeed.

Ops, sure. I fixed it, thanks for noticing it.

i don’t think lyman has fallen yet, but the other cities if not yet liberated, then they will soon. russians abandoned the kharkiv front.

The first retreat road from Izium to Lozove is now under Ukrainian control, the second passes through the destroyed Yaremivka bridge. The advance on Lyman
The pocket is in place, the advance via Lyman to cut off any retreat.

Who control p79 to borova?

Isn’t it interesting how even tho the owner didn’t remove the pro-Russian trolls, the good news did?

Please – about time you went back to daily maps! Every two days is tortuous when the Kharkiv front is collapsing

Ukraine Live Map is only about 12-24 hours behind these days, while this place is 24-36. There’s a very good source on Twitter if you look closely, but please don’t retweet him for 36 hours.

I really hope commentators are ot being over opimistic. If ruzzia can bring up some heavy artillary things might change inntheir favour,

Ok. And since yet, they doesnt use some heavy artillery because its the plan?

Its like reinforcement. If this troup wasnt close to the front (front in lack of defensive troup), its because they are not ready to fight.

There’s “operational reserves” in any proper army, but the Ruscists and Ruscom sent them all to the Kherson trap.

You mean the artillery they’ve been overusing to the point it can’t shoot straight?
Some accurate guns left, they’re reinforcing east of river, but it’ll weaken other fronts. Bombarding salient with remaining accurate guns won’t be very effective until frontlines stabilize, pocket will be gone in a few days.
A better functioning Air Force w/ good CAS & bombers would have really helped Ruscists.

And russian force in kherson took a lot of heavy shelling from ukrainian.

Ukrain can support this during months, russian during weeks.

Dont forget that russian fighting with an army of peace time. Ukrain had activate the cheat mode “mass mobilisation ” since 5month.

Grads don’t have to be accurate when used against troops on open ground.

All barrels need to be accurate, even if they’re PGM. But Rocket artillery probably is used less intensively than their ballistic barrels.

Never mind, they’re sending many of their troops from Izyum to Donbass lol, for PR reasons.

they didn’t use it so far ??? my gosh …is the only thing they are doing since may

By the way i am pro Ukranian

aren’t those troops in the Kupyansk front west of the oskil river bad supplied? I don’t see any ways for them to sufficiently resupply if their supplies get low, especially with the shit ton of aviation and artillery russia is throwing there right now (might also be blind rn lol)
seen some rumors of ”operational encirclement”, could they mean this by that?

Theoretically, yes. But the speed of the Ukrainians means that Russia has 20k troops in Izium about to surrender and a new 120 kilometer front line to fortify. Everything southwest of Kupiansk is about to fall

They won’t need supplies with the near total rout going on.

The purpose is encirclement although it may not link-up.

An operational encirclement would be decisive and win the war and this is not, because there is also donbas, zaporizhia, Crimea and Kherson

If ukrainians can keep forward they will win 5% of Ukraine. If held up, in their blietzkrieg, there will be the supply troubles you think of

Oh huh, he meant the Ukrainians! Hah, it made more sense if he’d referred to the Russians. No, the ones with supply problems are the Ruscom/Ruscists

The encirclement being discussed is that of Russian forces being encircled, not the other way around.

In terms of supply it seems Ukraine is walking into a lot of abandoned ammo stashes. Of course this is the Russian gear but Ukraine is still slinging a lot of that old stuff to go along with the good NATO gear.

Yeah, I literally misunderstood him

I dont understand what you are talking.

Ukr are very close to karkiv and their offensive axes following highways and railways. Its one of the reason why this part of the frontline was strategic .

I misunderstood you the first time.
It’s the Russians that don’t need supplies lol, because they’re routing. The Ukrainians have decent logistics, not to mention a mountain of captured supplies (tho it’s hard to put them into use immediately for the spearhead, so they’ll focus on using their own logistics).

And in Izium area, russian had lot and lot material. Now probably ukrainian.

Not to mention mountains of shells for Ukraine’s Soviet guns!

Novovoskrenske in Kherson Oblast was shelled by RUS according to UKR Min Def – they wouldn`t shoot their own right?

Ukrainians sniff out the donbas conscripts in Kherson and attack them. The conscripts flee every time

Russia has thousands of airborne tough guys in Kherson saving the day. Russia pulled them from izium. That’s why Ukrainian can conquer izium so quickly

They’ll be dead soon. 🙂
More airborne tough guys being dumped into the Izyum trap now… time to bring some SAMs and ManPADS in so officers can die on their ride out.

In the area of, not the village itself.

Combat in Lyman according to locals.

Some Russian soldiers are surrendering in southeastern Izyum.