Ukrainian Army continues the offensive operation in Kherson Oblast and is slowly pushing from the north towards the south. Ukrainians also managed to cross Siverskyi Donets river in Donbas and raided Russian positions at Ozerne.

Russian forces have trouble to advance alongside the whole frontline and likely now putting their hopes into the newly formed 3rd Army Corps to help them to resume the offensive at least towards Slovyansk. 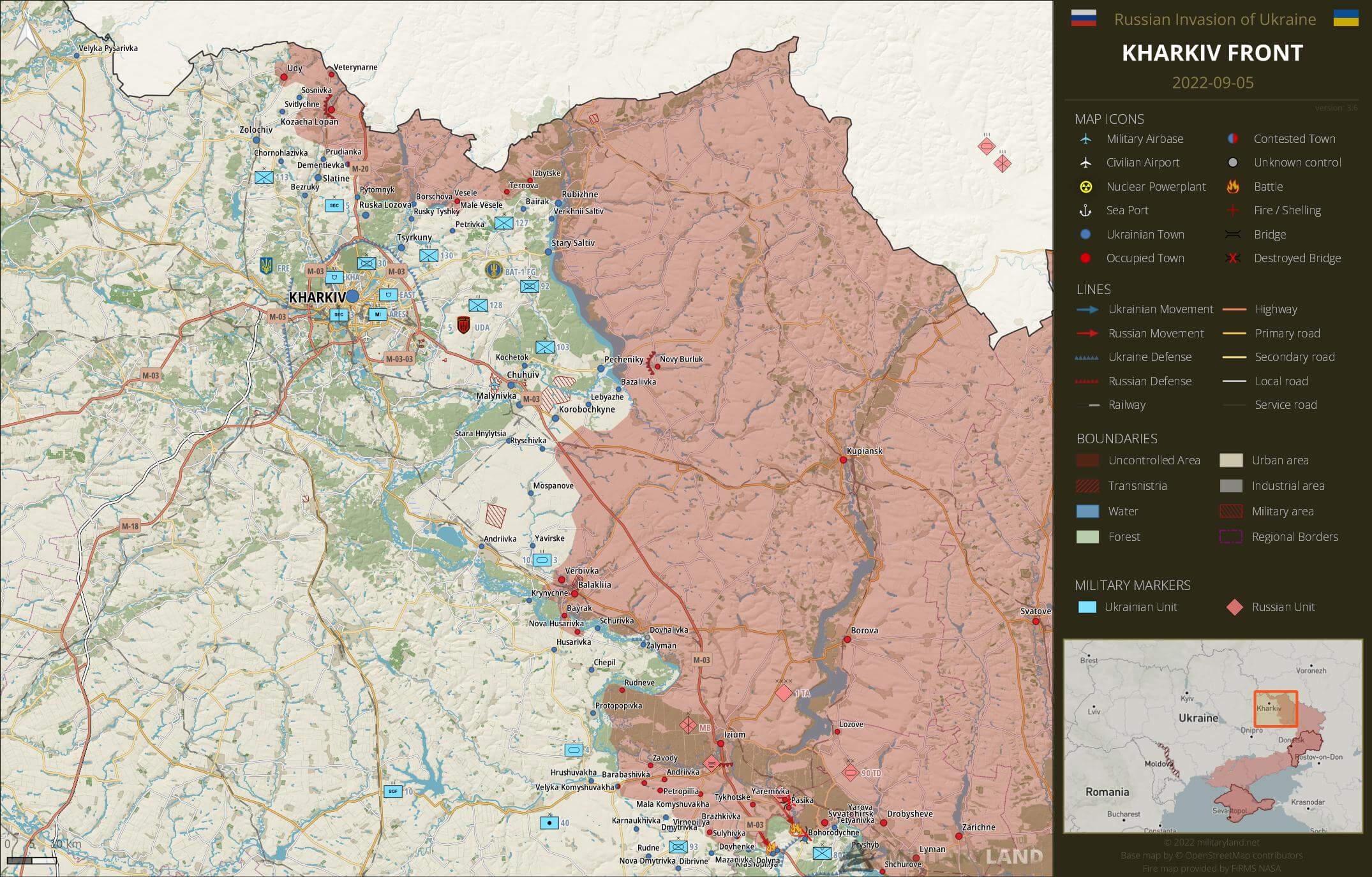 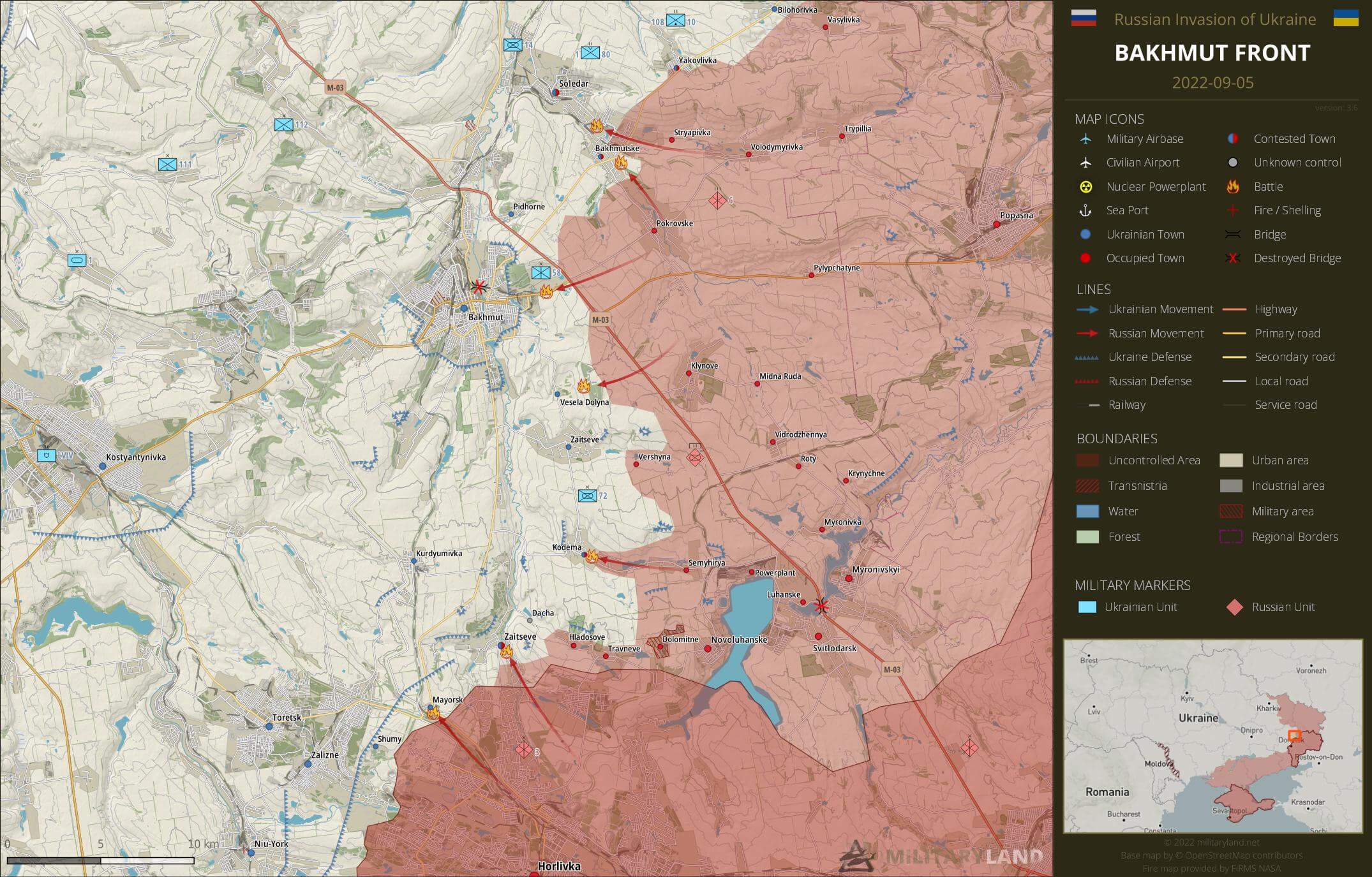 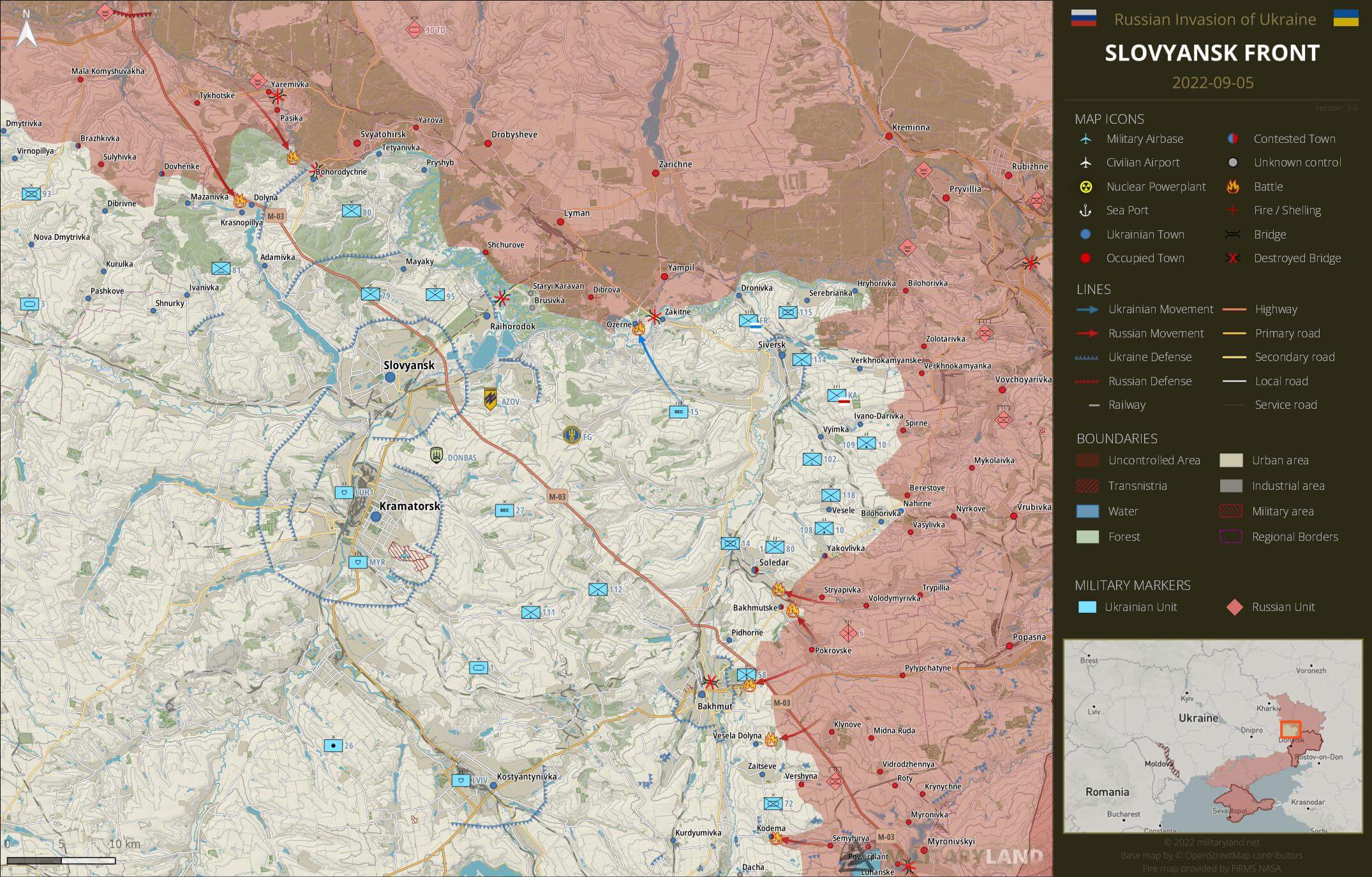 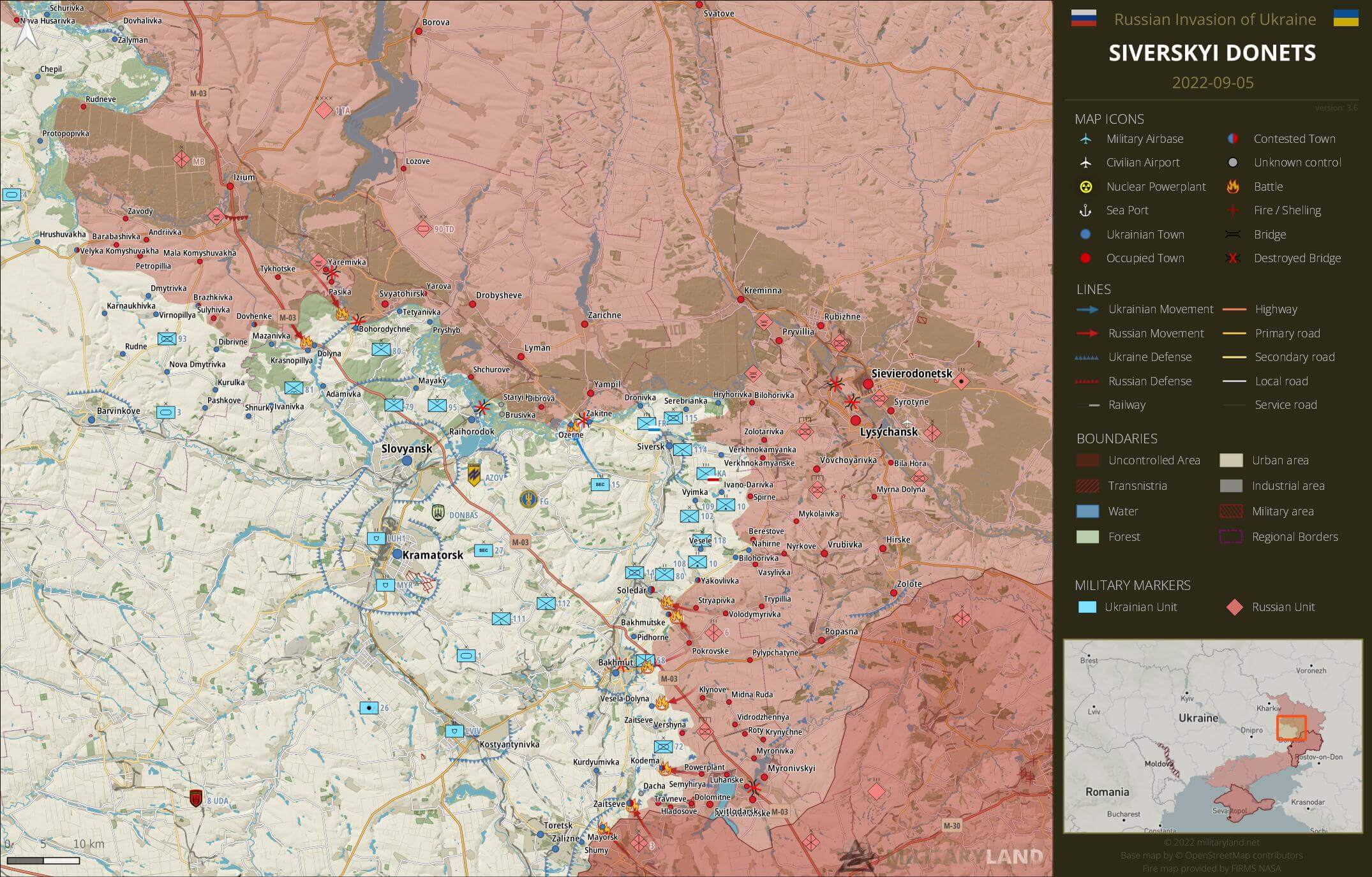 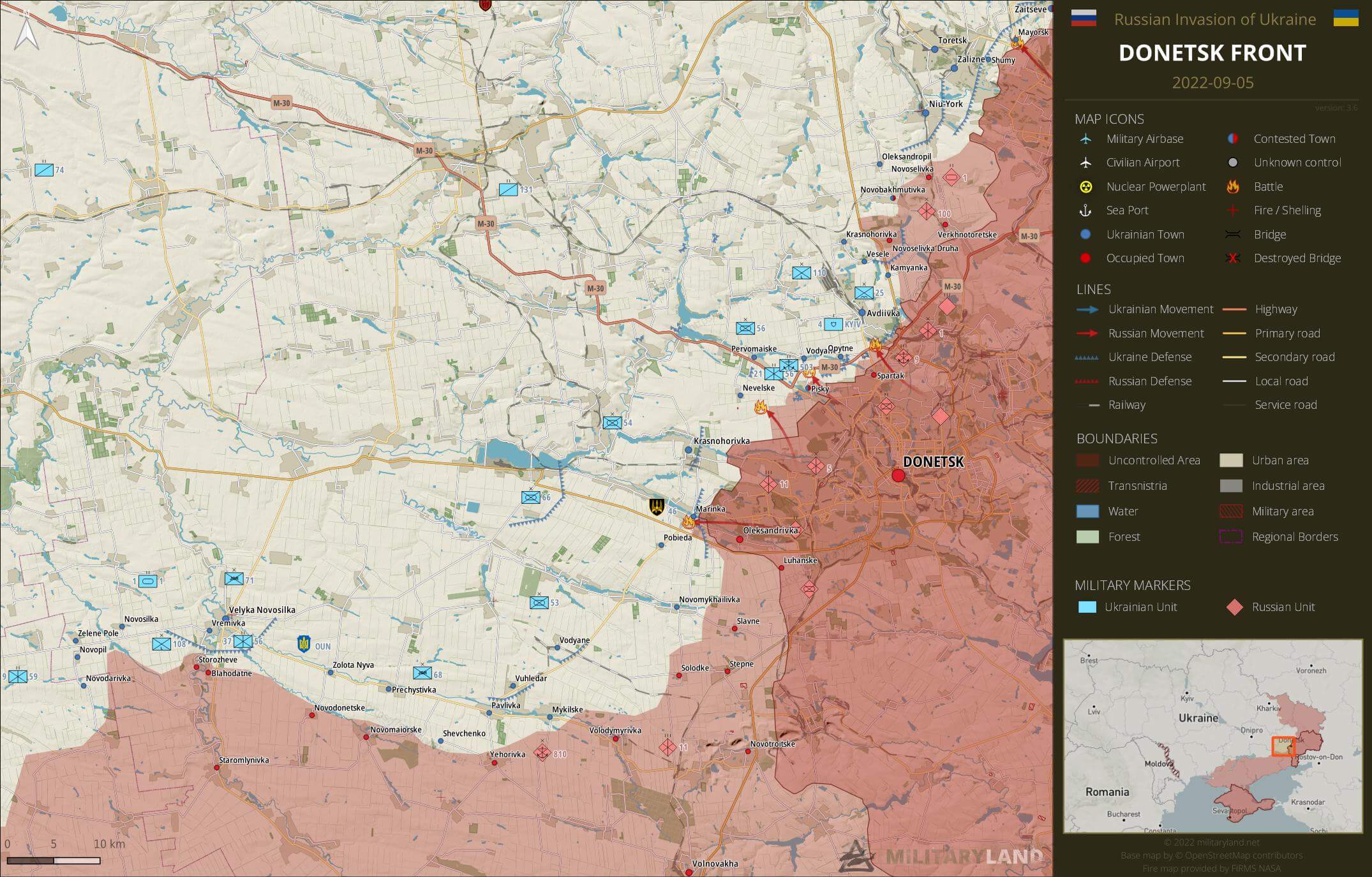 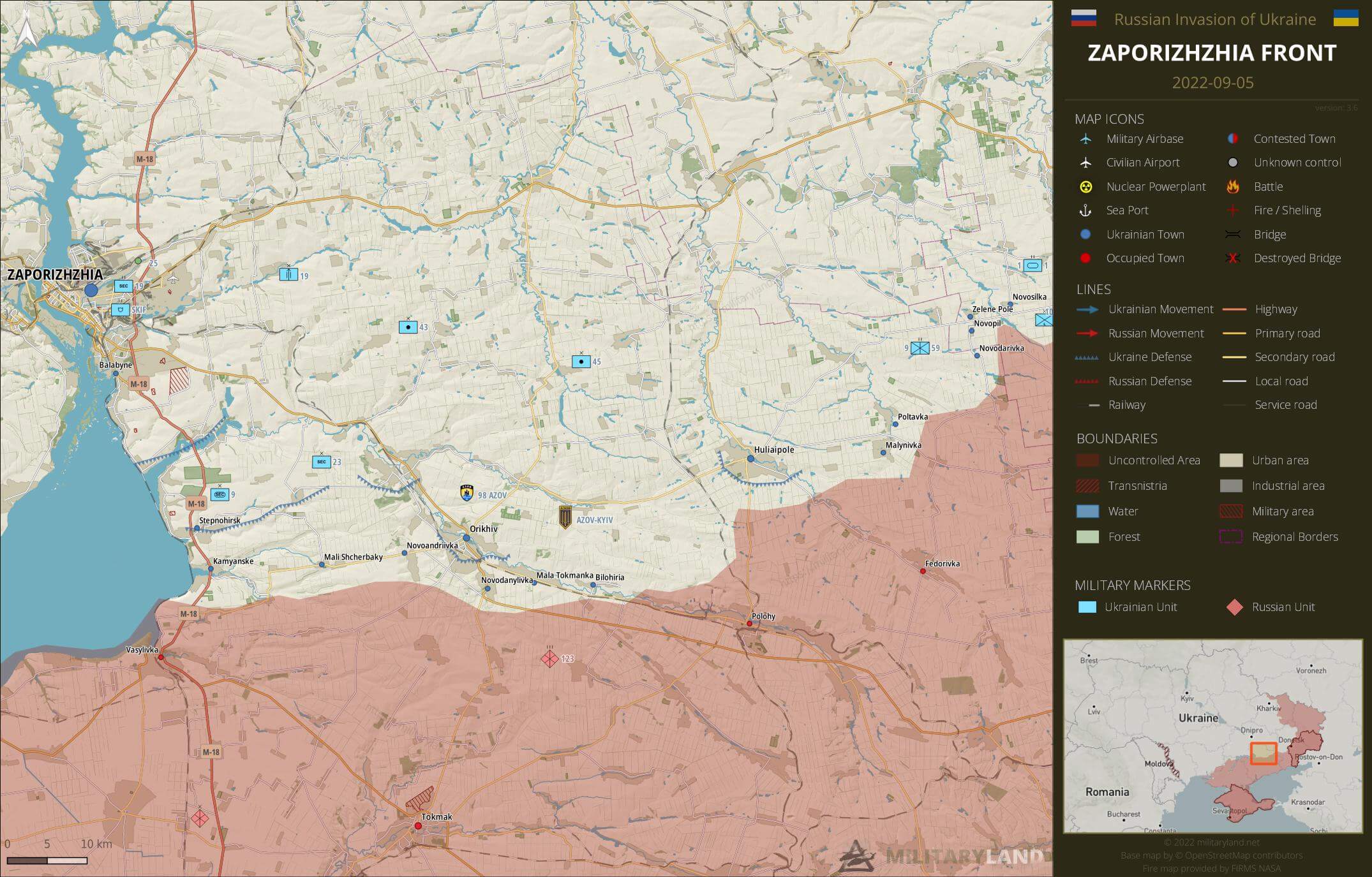 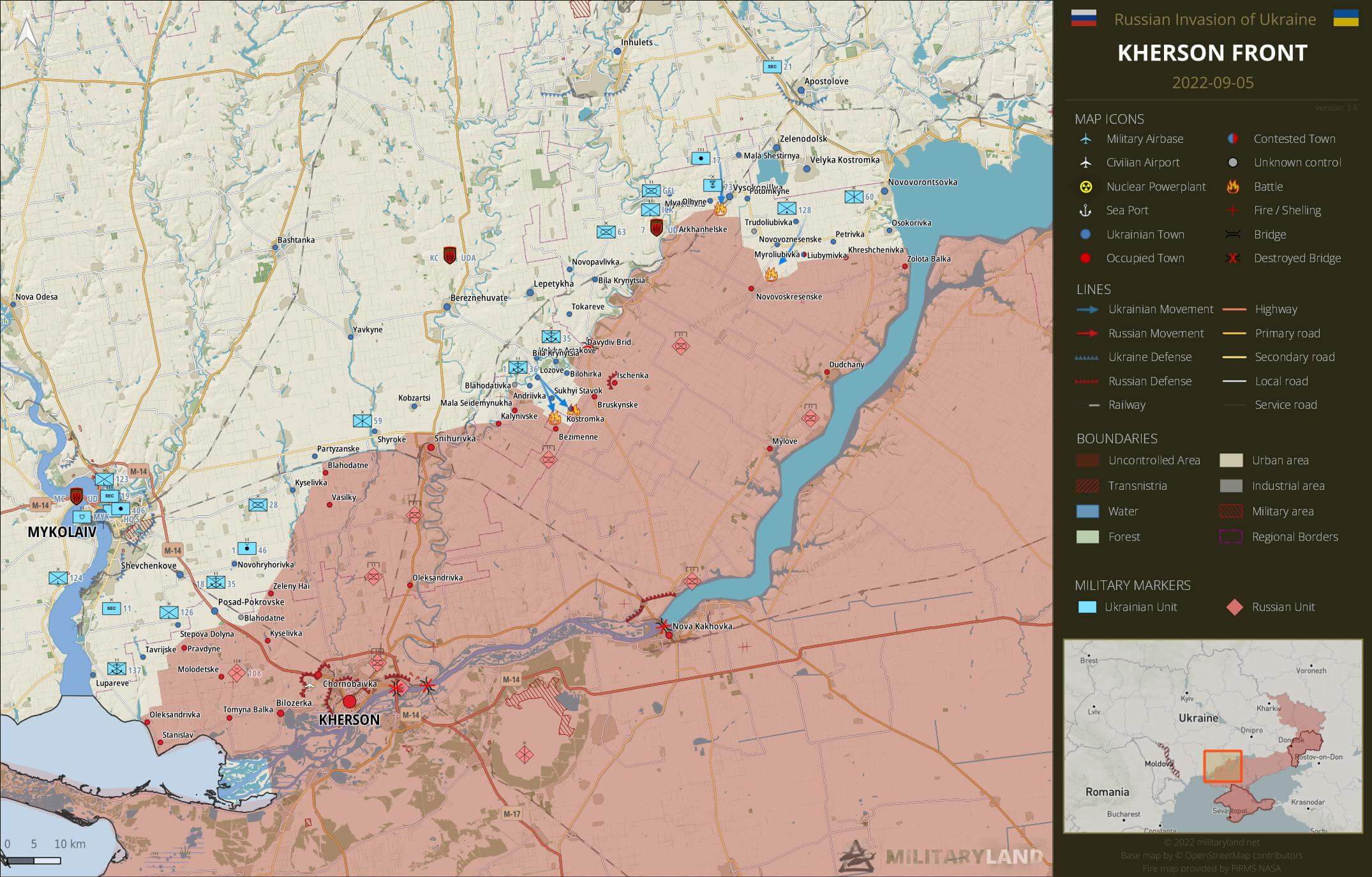 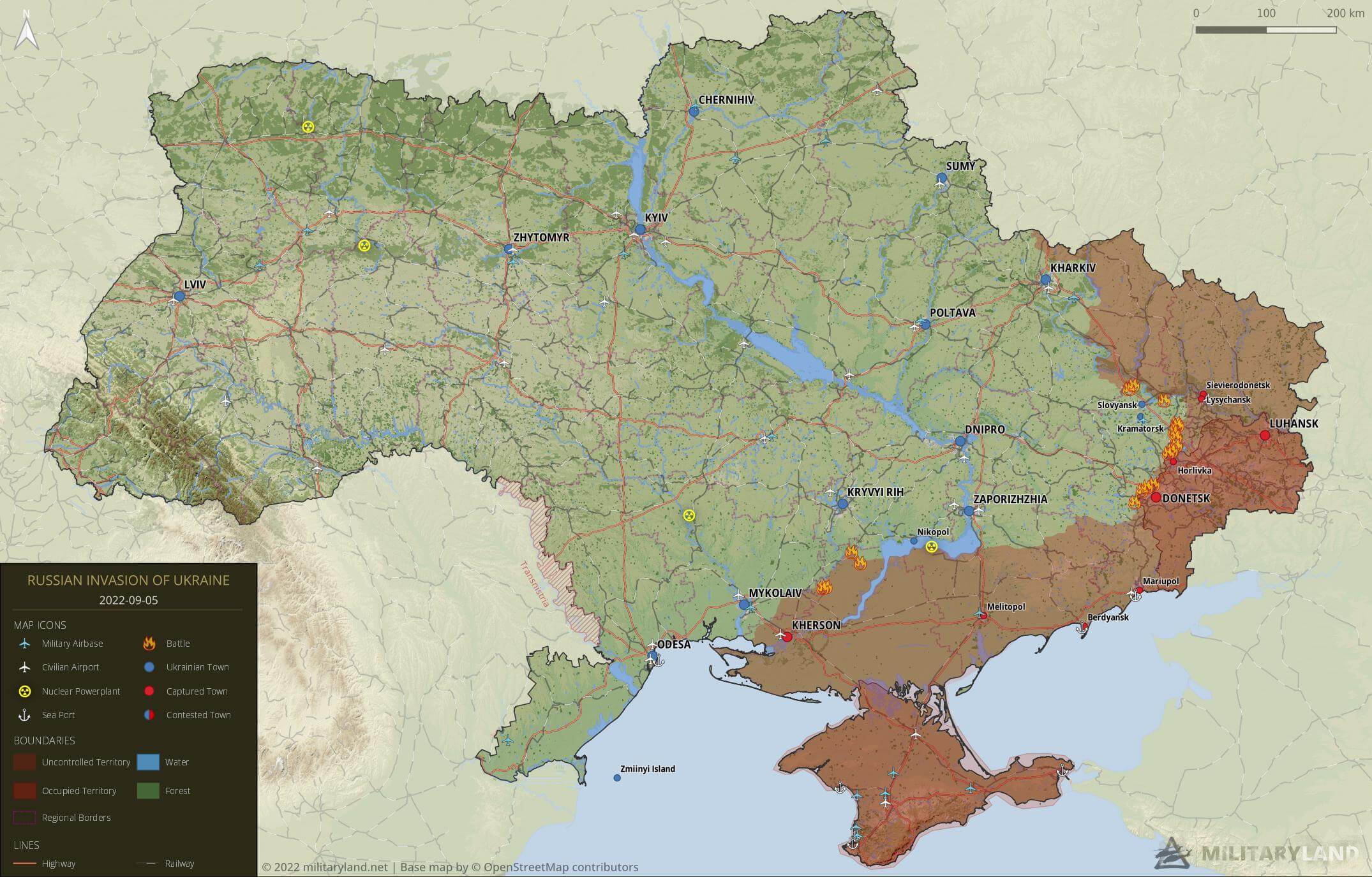 at the same time the video from Staryi Karavan with UA soldiers there (seems to be 2 days old) resurfaced. Looks like set of ‘special middle-finger operations’ of sort (and general testing of cohesion of defences and passing an infiltration teams into RU-controlled areas).

Or distraction for balaklaii middle finger?

waving the Ukr flag in Ozerne kinda had to somewhat rubbed the Ru in a wrong place, had it not? Though having any actual (even just as spoiling point) potential bridgehead/crossing as such would render any Russian incrusion from the North into the back of defense lines close to impossible, which by itself is more than just a ‘PR stunt’.

There is a difference. While the soldiers that raided Ozerne were light equipped, the raid makes sense. However, the ones at Staryi Karavan are equipped for two-day plus operation (bags, sleeping pads etc).

Imagine being Russian, trapped between the Inhulets and Dinpro Rivers. Your fellow soldiers are pulling back from village after village. You are not getting paid what was promised. You are not getting fed. You hear that soon there will be no ammo. You know that what was once a large grouping of Russians is being slowly sliced into little, bite sized pieces.

Wishful thinking methinks.
Other reports suggest the kherson offensive is a total disaster.
I have a wait and see policy.

you mean Russian Fantasy Network? I love their narratives

You’re exaggerating. Some RU sources are quite accurate and reliable, at least inasmuch as fighting conditions allow it.

44 destroyed himars missiles…. not himars systems itself… they didn’t claim o have destroyed 44 himars systems if you were to actually look at sources these statesments came from. that would be the russian MoD

you can also just look at this video
https://www.youtube.com/watch?v=4AjSqTiS8_s

I do not even dare to mention theirs ‘sources’ which had seen ‘Leopard tanks’ and ‘Bradleys’ in Kherson area. That’s jump from delusions to actual hallucinations. What next? Unicorns? Transformers? (I mean – “Ukr commando attacking the ZPP twice”) Winged Hussars? (“2 Polish armored batallions” were “reported” in Donbas 3 months ago, yeah…)

russian sources not to be propagandists it is like saying Nazis never killed jews . the ones I checked were very very inaccurate to say the least , mostly annoying . i am not asking the truth of course ,no one does not even UA but at least if you don’t want to say something just ignore it .

When many Russian sources tell the “truth” it is only done to increase the probability a person will believe them later when they have a more important lie they wish to spread. Strategically telling the “truth” is itself part of their overall propaganda strategy. Ukrainian and western sources will often be wrong, but it is far more likely to be due to human error or basic psychology.

There are no reports of the Kherson offensive being a total disaster for anyone but Russia.

Russian propagandists don’t make reports. I’m baffled as to why people continue to go to sources that intentionally mislead them all the time.

The only truth comes from UA reports. Amen.

That is not the point!

The point is, that Russian and
in their wake pro-Russian accounts
lie on a regular basis.

I still remember the circus staged by them
after the mass murder of the MH-17 (Malaysian Boeing 777) passengers back in 2014 when suddenly all of these “sources” presented ever more ridiculous “explanations” how the shoot down should have commenced.

Both sides will sometimes be factually correct and factually incorrect. Only one side chooses which to be based on an over-arching propaganda strategy. As a matter of strategy a con-artist can be expected to often act as an honest and trustworthy person over things that are fundamentally unimportant to better sell their con later on. You seem unable to recognize this.

No one else is giving much info- why?

I do not understand exactly besides the history of overenthusiastic reporting from Ukr side up to nonsenses which needed to be embarrasingly debunked by Ukr MoD (e.g. ‘Kiev Angel’ case) and mounting unrealistic expectations because of such ‘reporting’. Since you cannot reason with each tiktoker/twitter strategists, they choose to stay silent. Bear in mind that this is just my speculation.

Why ? Because when you go on an offensive, you don’t want to give any information to your enemy. Any information you give may be a clue about your real goal, your strategy, etc.

inflicting loses in VDV and special units (don;t expect them to go down easy) alone would be a success on its own – these (and Marines) are most competent and dangerous forces Ru have and such loses are irreparable in the ~4 to 5 years perspective.

Honestly – we may never really find out what was/is happening in Kherson. I hope what I am hearing is wrong. The western media is not reporting any ukr losses at all. Ukraine blackout on all info. They are fighting on open and exposed land. Easy artillery targets. I hope not.

it will be rather slow and bloody – my point was that – as far as we may know, in the area are a lot of the best units actually availible (airborne, SoF). However it may sound cruel, the one dead vdv paratrooper is worth “10” of ordinary Russian soldiers. And in case of GRU units, probably Ukrainians, too. There is not so much of them and training takes ages and a metric ton of… Read more »

GRU on russian side mostly refused to fight . special army units but them . actually checens and wagner group are helping a lot , other than Paratroopers , the latters suffered the most on the first 3 months . in Kherson many DPR and LPR units are fighting like there is no tomorrow , that is their fight and they feel for it as much as UA are . for russians usually money is… Read more »

not correct , the washington post this morning have an article very interesting . reporting LOTS of casualties from ukranian side too , as it is expected to be , because offensive means death toll rising and if someone says the contrary is lying . what they reported is that the russians are fighting off very fiercely with lots of artillery and air CAS and bombings . it’s very hard ..

It amazes me what Ukraine is capable of with minimal support from the west. We have to deliver new airplanes and long-range MLRS to the Ukrainians – Ukraine is defending Europe, democracy and slavic dignity

damn… how much for ukraine?

according to Ru sources from 6 to 15k already (I just added up reported numbers). Assessments on both sides seems ridiculous (especially in Ru sources even taking into consideration their tendency to destroying more of stuff than was ever present in Ukr. in the 1st place). SLash by 10 (KIA/MIA) then multiply by ~3.0 (WIA both permanent and temporary) – then it might be somewhat realistic.

The Ukrainian reports are about x3 /x4 the number of vehicule losses recorded by oryx. If you consider that the real losses must be something like x1.5/x2 the oryx recorded losses, it means the ukrainian reports are doubling the enemy losses. So it is exaggerated, but not ridiculous.

Russian reports, on the other hand, are completely ridiculous. But that’s nothing new.

i don’t believe this number for personall losses , it seems completely unreal . probably the real number is more likely to be half of it . bcs if losses are 50k then you should also add 100K or more injured or lost or POW and this is ridicolous . in my very personal opinion is that the TOTAL nr can be 50k between lost POW and injured

Yes, halving the ukrainian numbers may be a good rule of thumb.