Ukrainian forces launched a counter-offensive operation in Kherson Oblast, but hasn’t yet shared any official information regarding the liberated settlements.

Meanwhile, fighting in Donbas continue. Heavy clashes are reported from Soledar, Kodema and the vicinity of Bakhmut. Despite the air and artillery superiority, Russian forces have been unable to advance for at least a week now. 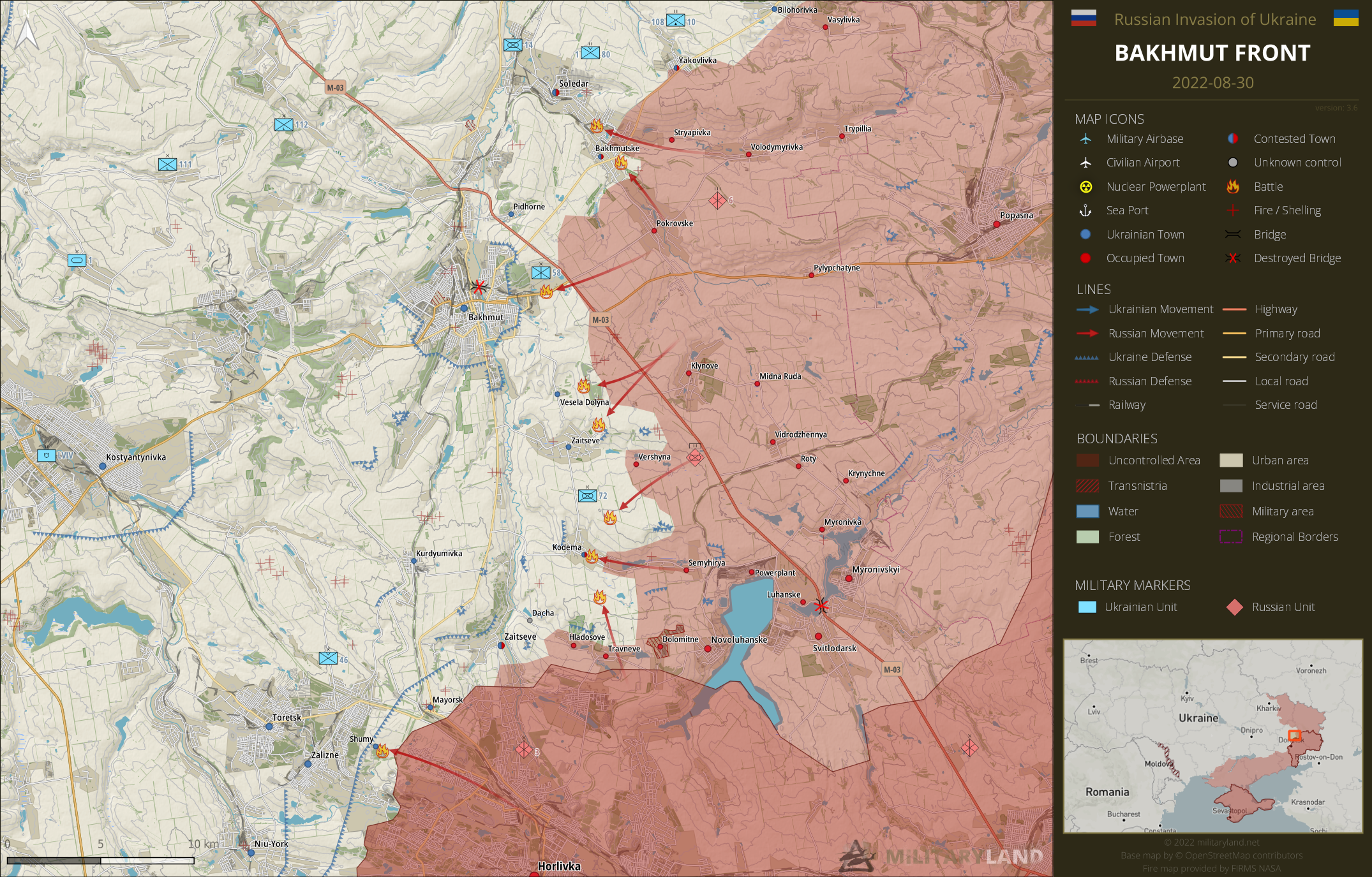 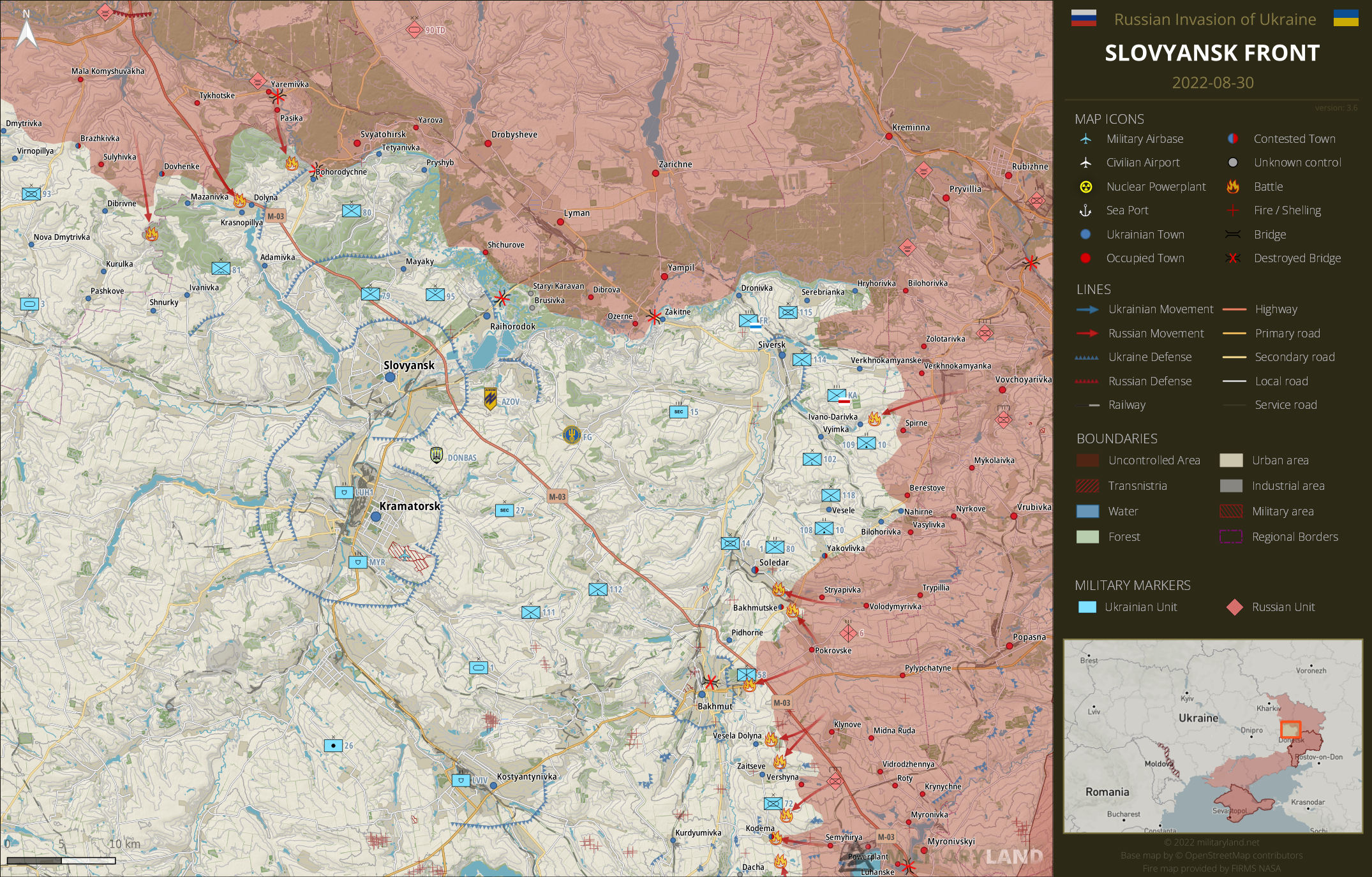 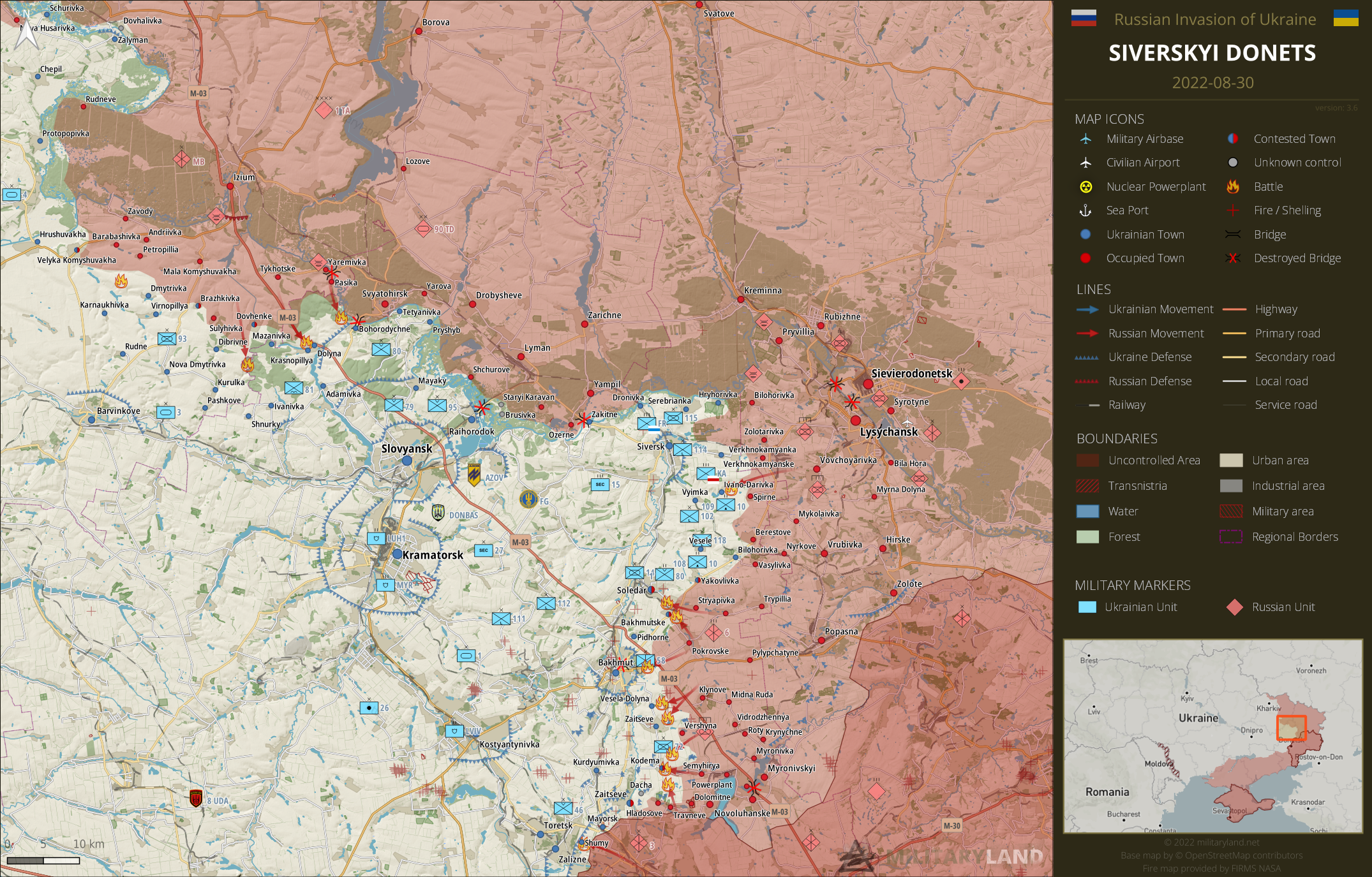 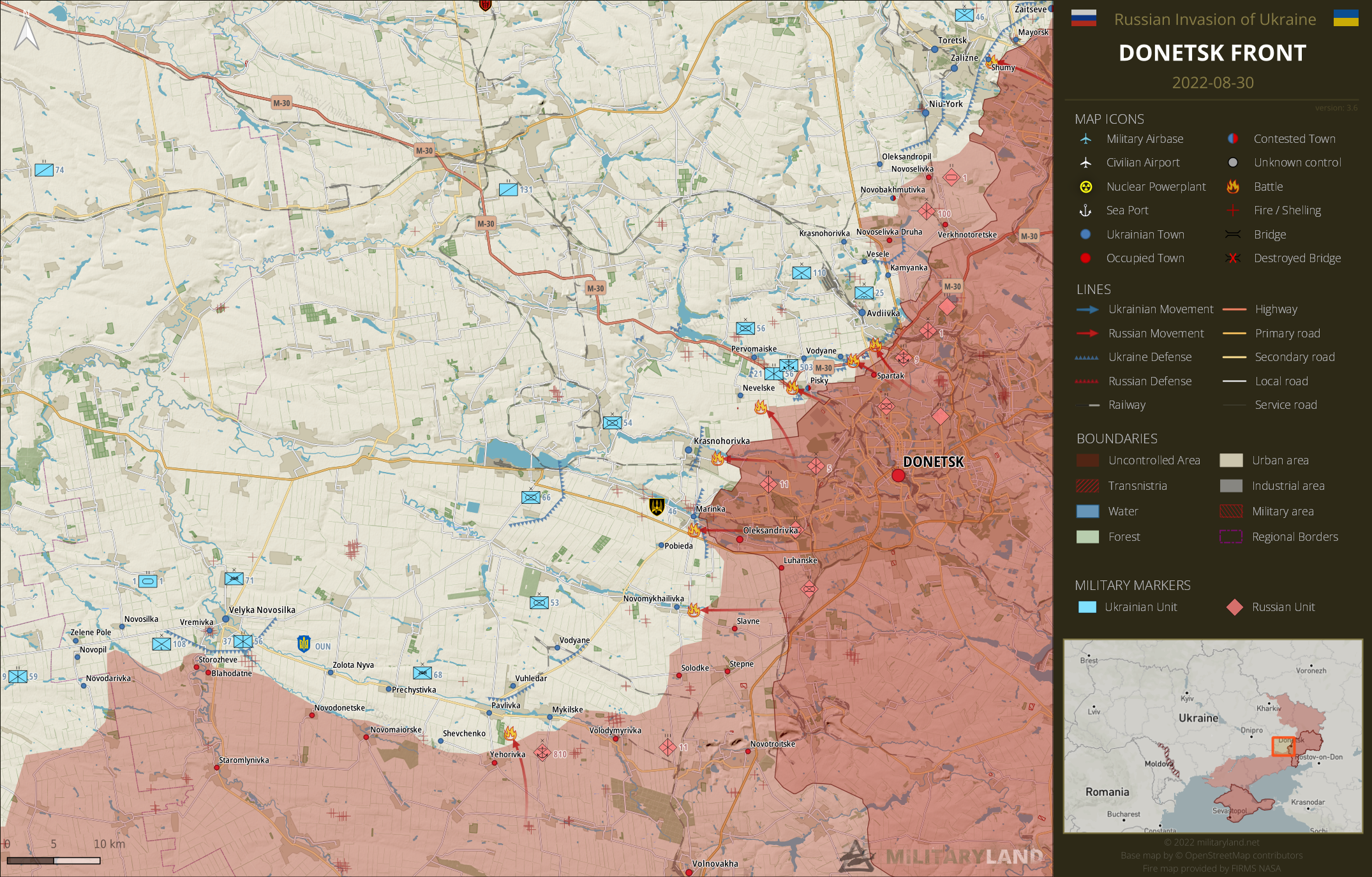 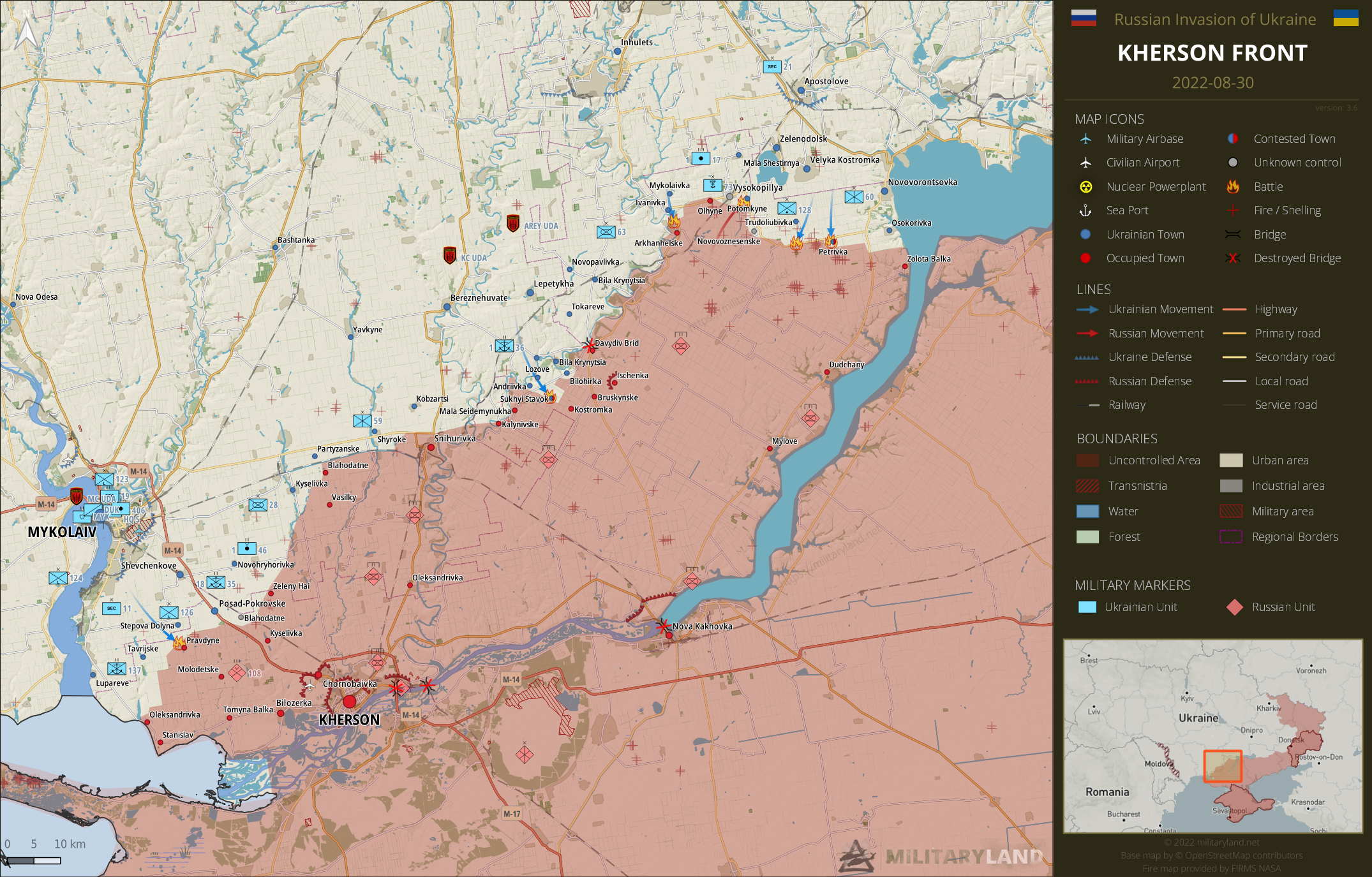 Ukrainian forces have launched a counter-offensive in Kherson Oblast on August 29, 2022 and have reportedly broken through Russian lines. Here below you can find information, which both sides can agree on, or they are visually confirmed.

According to Ukrainska Pravda and CNN, Ukrainian Army liberated number of settlements. This, however, remains unconfirmed and thus not included in our Invasion maps. You can find the map on our Twitter. 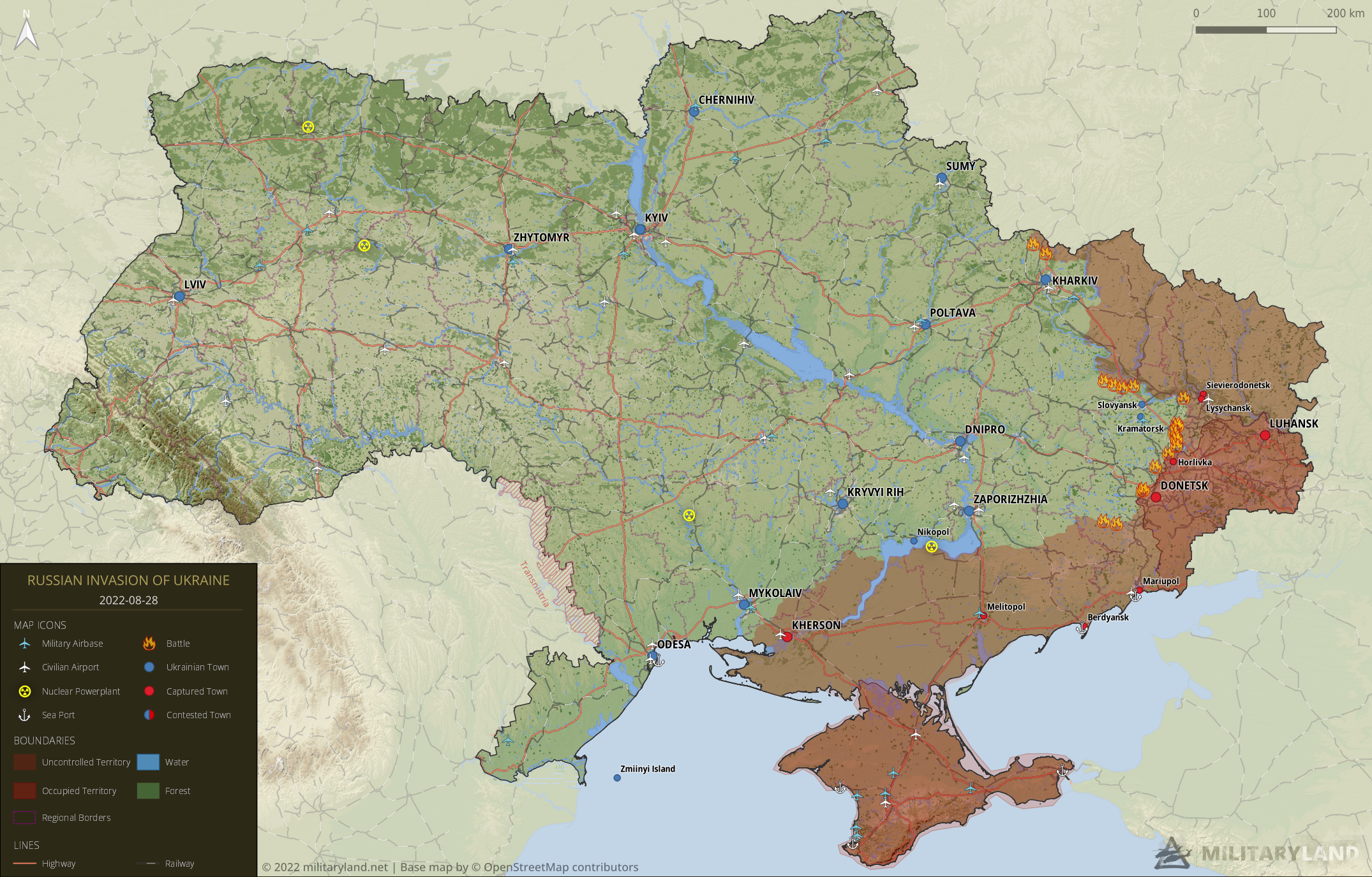 I mean its simple, RU can have 20k troops west of the river but that means shit without, bullets/artilery shells/food/water etc. So if UA keep a steady attack witout too much looses, and constantly hits any pontone attempt for resuply, kerson will be liberated in a matter of weeks. What i am more curious if UA will have some steam to go after melitopol and crimea before winter comes around.

Southern operational command and the general staff have reported big russian losses 2 days in a row now, espacially in equipment.
Looks like a probing attack across the whole front line of the right bank with astonishing succes in some areas. Letz see what can be consolidated. Looks like ukraine is really taking the initiativ. The Kherson strangle move tightens. Winter is coming for russia.

I’d say that – instead of media-made ‘shock and awe’ for which they simply have no means (art&aviation in proper numbers) – Ukr put on ‘mess and confusion’ operation in effort to debilitate and demoralise the enemy. I hope they will bite a little, pause (and maybe give back some), rain the hell on Ru forces, and bite again. Rinse&Repeat. But let’s see how it shall proceed in a week or two.

I`ll write this just once: “Winter is coming” is an idiom from contemporary culture rooted in a famous series of books. It stands for “deep shit coming”. This winter there will be deep shit coming for russia: Oil sanctions by EU, crumbling economy (no/less gas income, lower oil prices + sanctions) and battlefield losses. This is just the start.