Russian army tried to break through Ukrainian lines near Chuhuiv, but Ukrainian defense was ready to meet them and pushed them back. Fighting continues in the vicinity of Bakhmut, but no significant change has developed during the last 48 hours.

On the Donetsk Front, Russian forces managed to push Ukrainian troops out of Pisky, after weeks of heavy fighting. The capture of the settlement is however only symbolic, the enemy has no advantage by controlling the settlement. 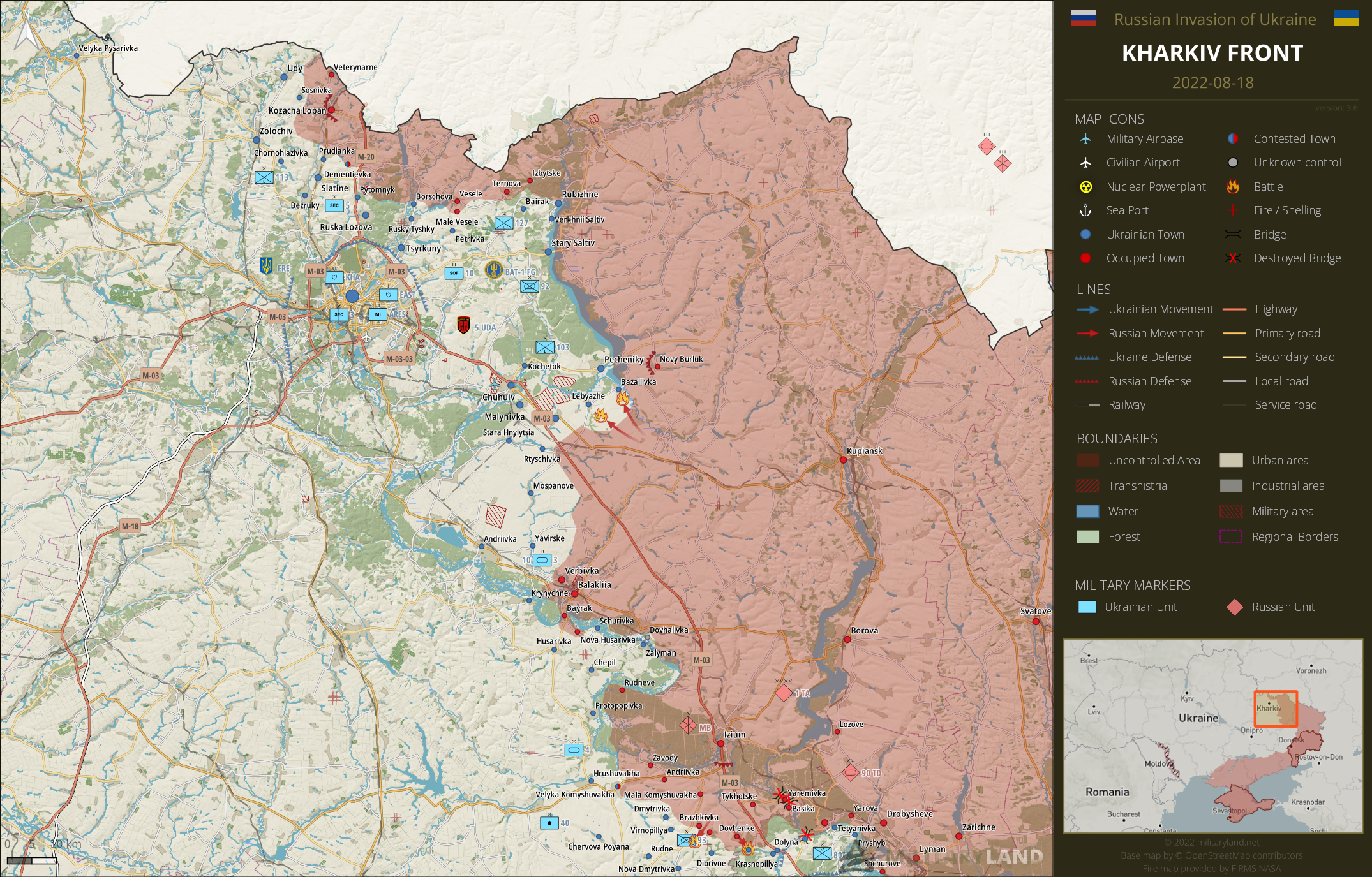 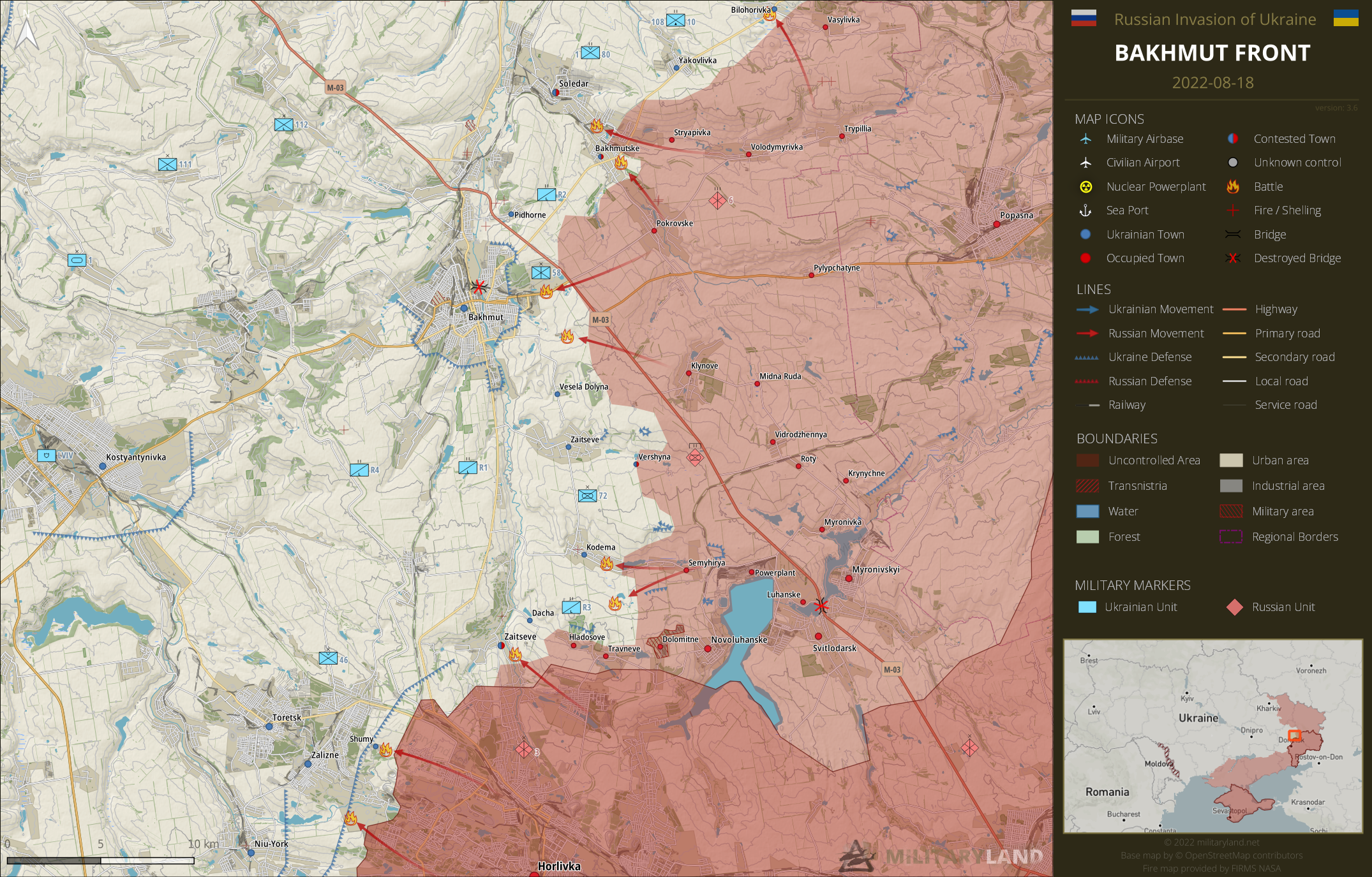 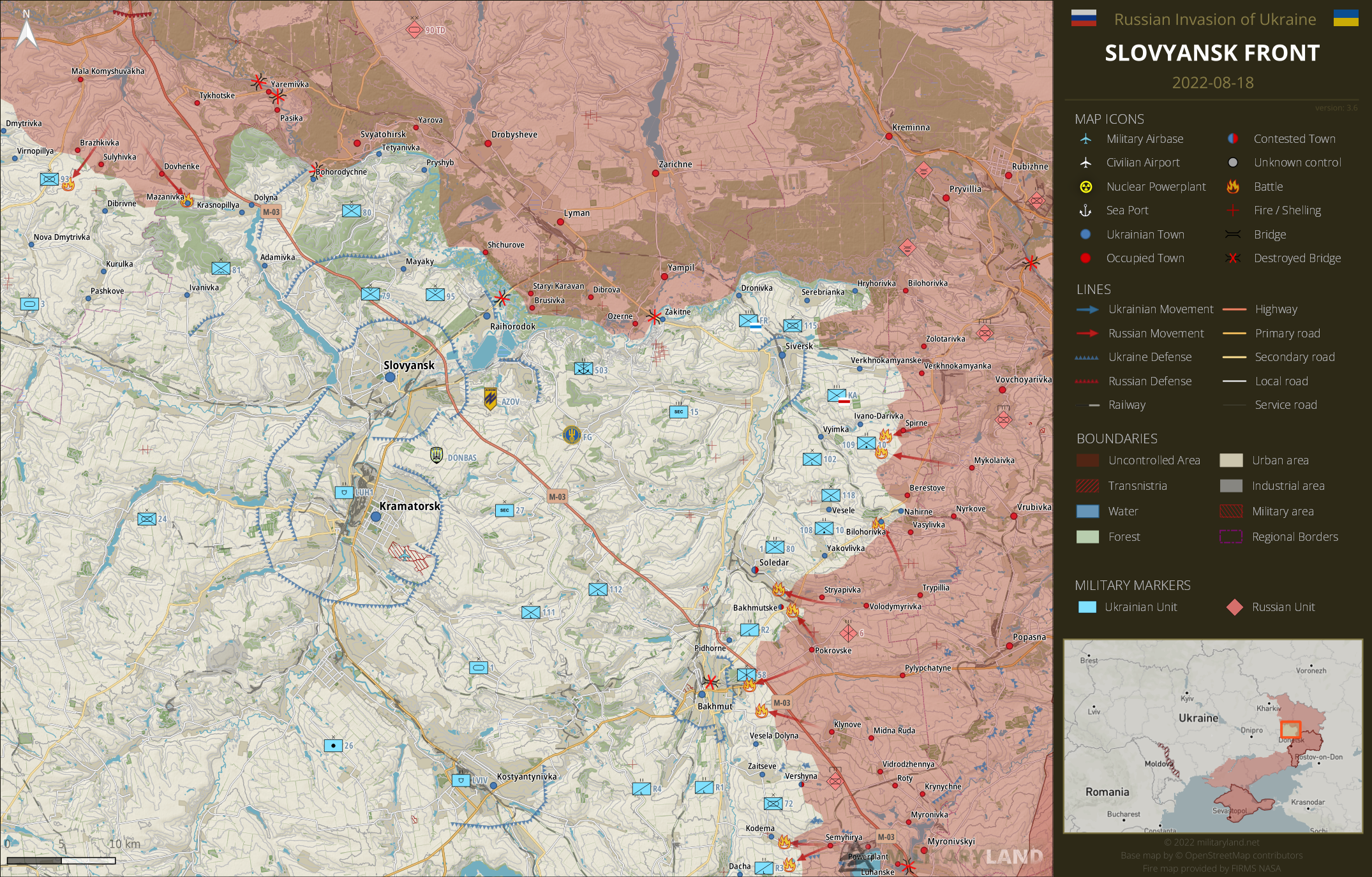 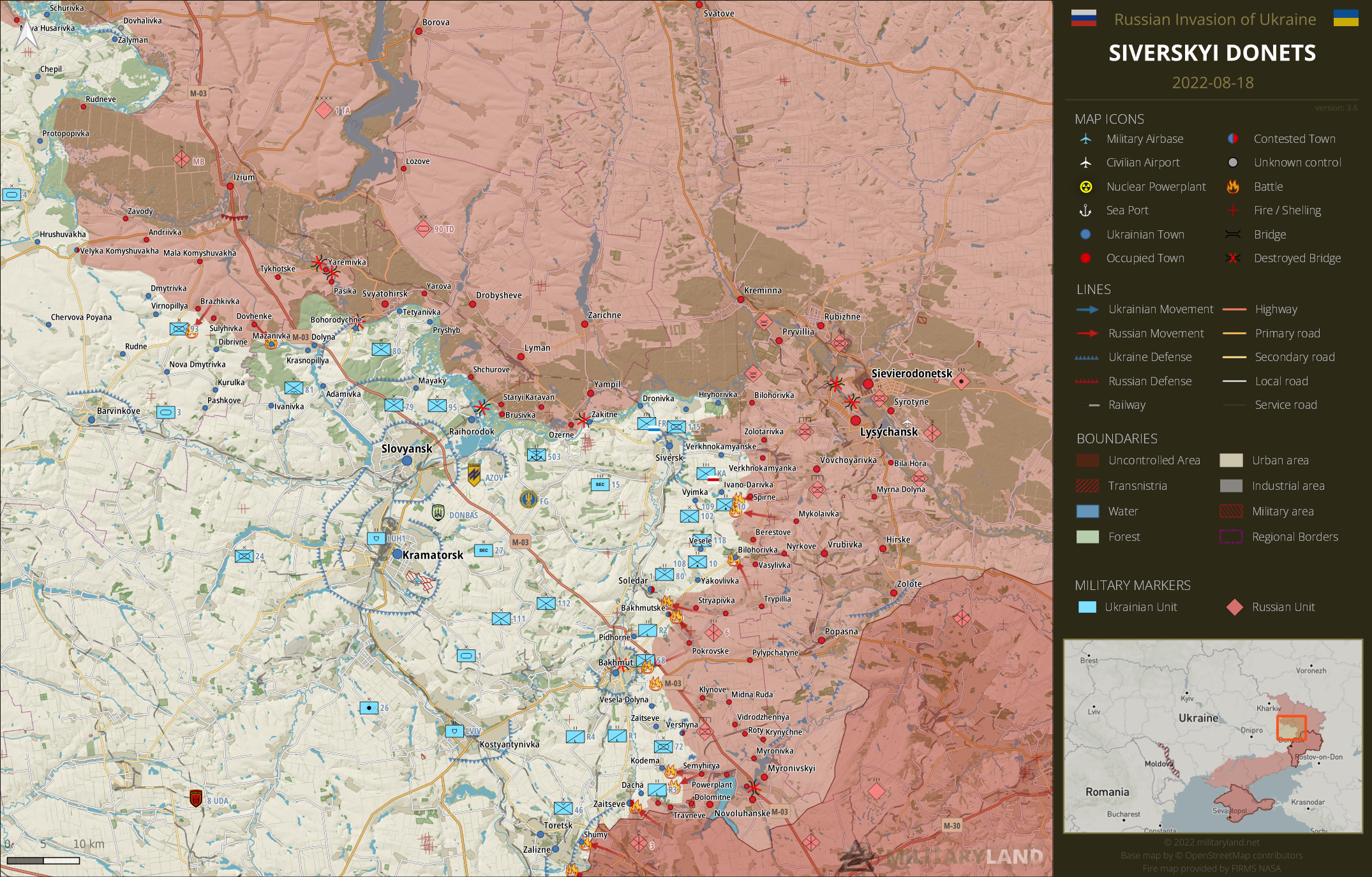 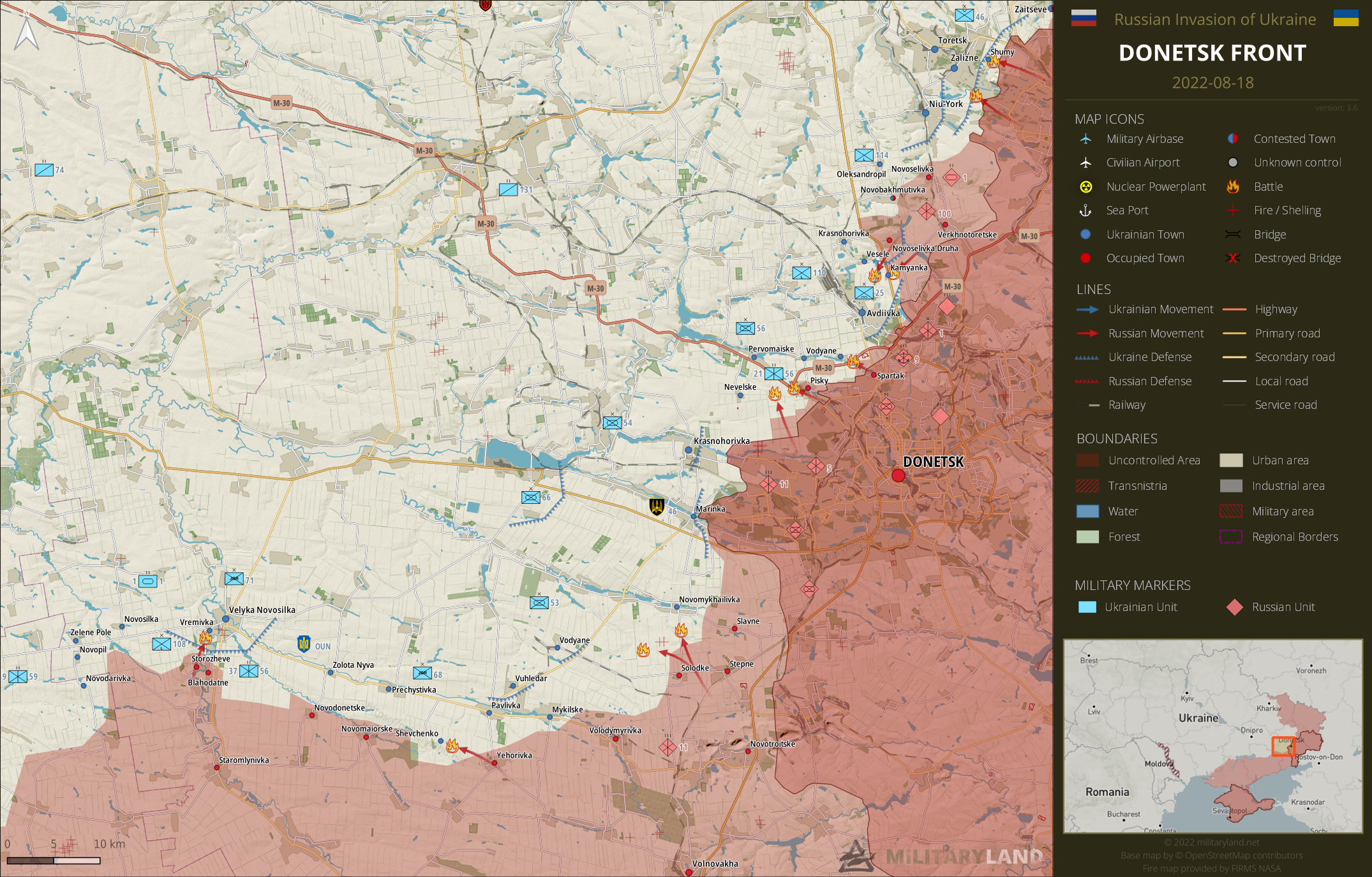 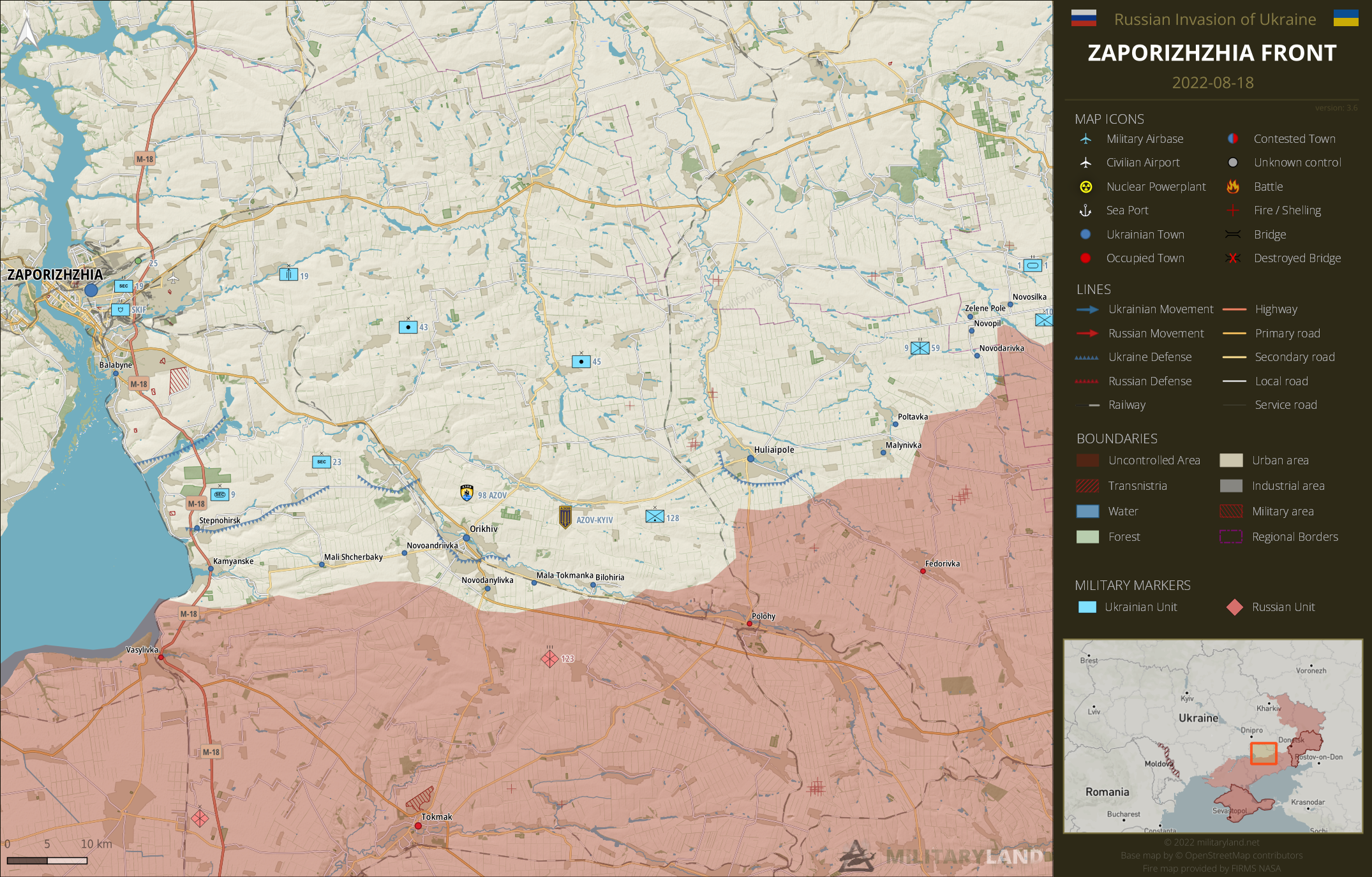 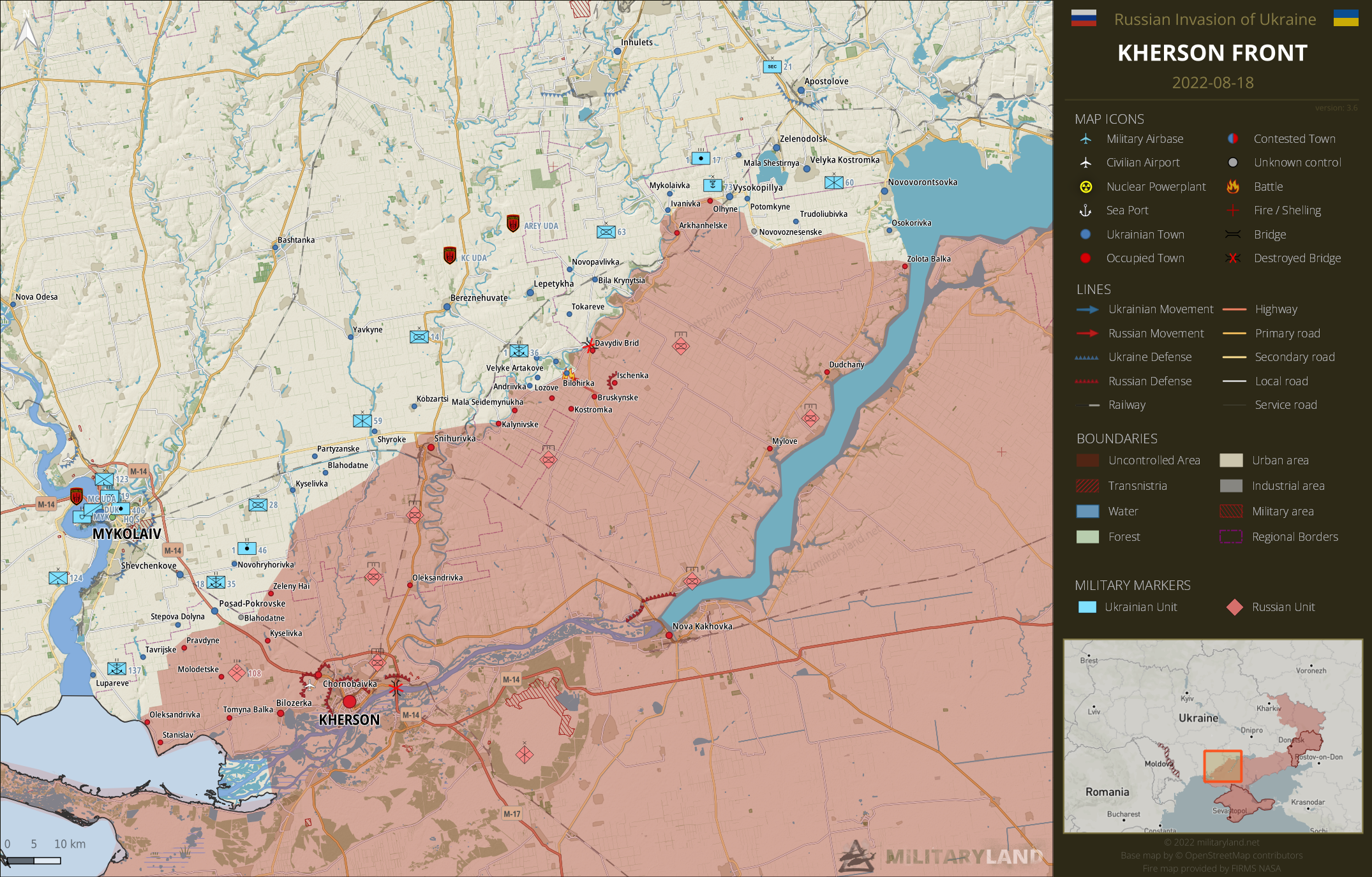 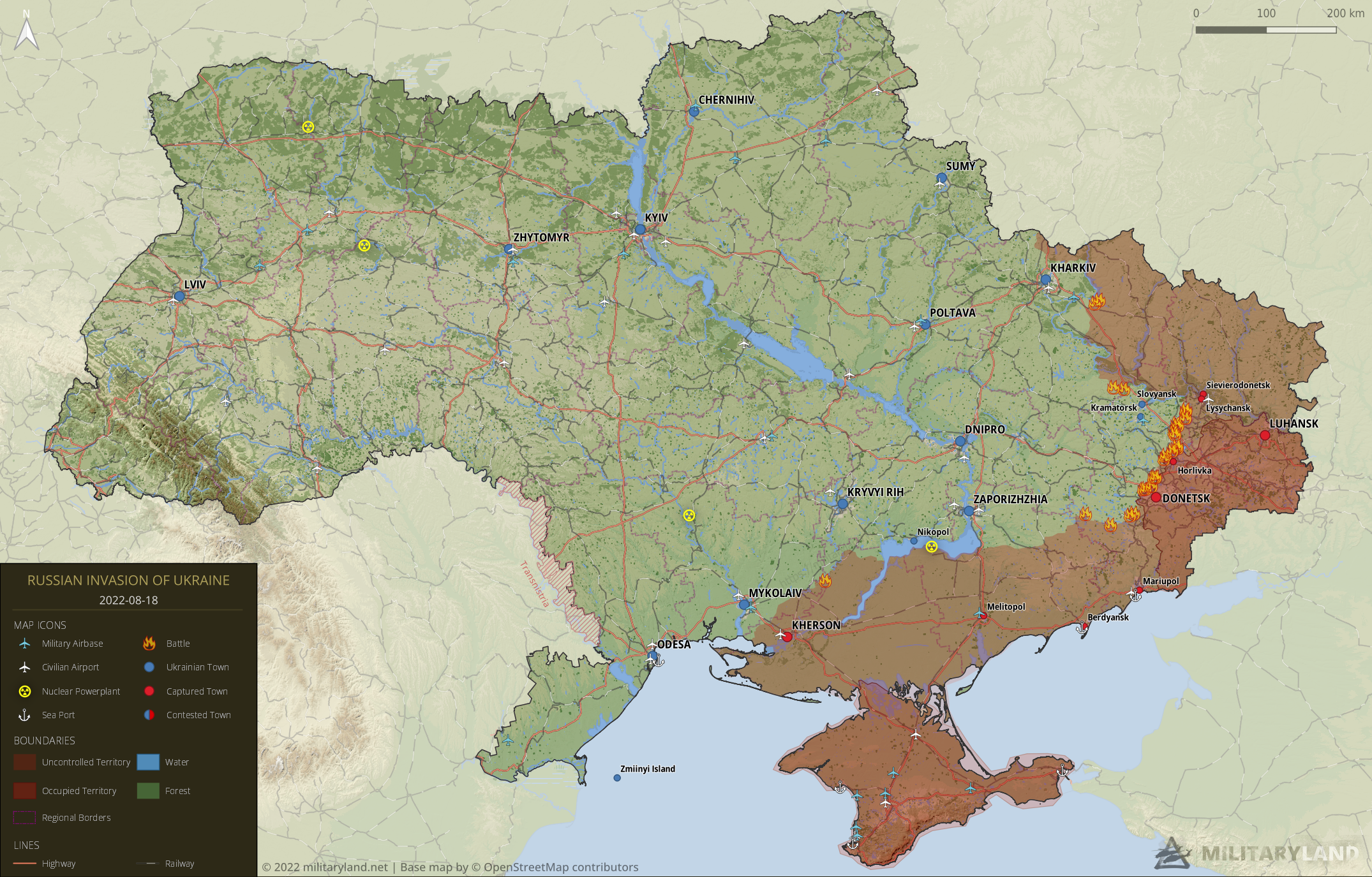 Judging by the official reports of the MO RF and the LDNR, Vershina, Dacha and Zaitsevo (near Gorlovka) were taken, as well as Udy in the Kharkov region.

nothing confirms that (e.g. no geolocated footage) as for now it’s just another ‘virtual offensive’ from RFMoD/Rybar etc. Do not forget that Siversk was taken already 8 times – as I counted so far.

Recent John J. Mearsheimer’s article predicts a long conflict unless something extraordinary happens. Both Washington and Moscow have invested to much to quit and moreover any major victory or defeat by either side will result in escalation (and either a total destruction or establishing some sort of new equilibrium).
https://www.foreignaffairs.com/ukraine/playing-fire-ukraine

yeah, he is one of my ‘favorite incompetent gaffers’ desperately grabbing attention at the last chance possible.
At the moment U.S. “great investment” (including prestige one) is negligible.

Negligible, in a sense that the US is not directly involved perhaps. Not negligible in a grand scheme of things. The argument is that both sides are committed to winning now which makes any compromise unlikely and out of control escalation on the other hand quite possible. Like a poker hand when everybody’s raising and not willing to walk away.

1/2 ‘negligible’ in a sense of an ‘investment’ (military, financial, political etc.). The stake is pretty high (effective elimination the neo-fashist Russia from the ‘bigger picture’ for a , preferrably, longer while). However the active assets engaged into such a ‘game’ are laughable. I am not sure if US ever played – at least in this century – such assymetric hand (so little for so much).

2/2 I’d by glad if at least most would accept that any ‘influence’ on Putin and his court is exact ‘fck-all’. It does not matter what ‘we’ do, ‘he’ will do whatever his broken brain will produce. So, ‘trying to not escalate’ is kinda pointless – there is no influence on this other than limiting material possibilities.

Well, this is kind of the point, you seem to be in line with the professor’s article after all. As long as Putin is publicly proclaimed as a madmen, there is no way to back off and talk, because it is not cool to talk to madmen. So the only way is forward, to keep raising the stakes, to maintain the equilibrium and hence – the long war.

No Putin is not a ‘madman’, neither Hitler was. It’s as arrogant and stupid projection as misleading it is. And this is btw one of the general flaws with these narcisstic ‘theories’* as ‘realism’. Not only by such one mistakes ‘states’ with human-like actors but even such mistake is made wrong. Actors have different frames of reference (or diff. types or rationality).

Sorry for late response, one of my IPs is blacklisted here. I didn’t get the reference to realism. I might be wrong about these -isms, but ultimately realism in terms of methodology is a relative to materialism in a philosophical sense and it’s supposed to be objective. ‘Narcisstic realism’ sort of negates itself.

disclaimer – this is not to imply that the realism produces only the ultimate truth and any associated theory is sound. And after all, we as human beings like narratives, good stories and simple messages designating the current main villains and the current best smartphone on the market

1/2 ‘realism’ is an umbrella term in regard to the general set of concept in political/social research – in the M. case it is also the name of his own ‘theory’. It has nothing to do with the epistemological meaning of ‘realism’. The general concept of this set of ‘theories’ is based on XIX century ‘big game’ of ‘geopolitics’ (which is imperialistic ideology disguised as ‘science’ itself).

2/2 you will find a lot of this in the popular revival of ‘heartland theory’ (Mackinder and Co.). It has some resemblance of a sense at the beginning of XX century and was commonly used by any form of imperialism (in variants ofc) as its general ‘objectivisation’ (namely: foundation in the reality). As a serious political and social discourse these ideas are pretty dead intellectually

3/2 since structuralists (give or take decade). Still popular because simplistic and convincing for low educated political strata (and you can make a lot of YT videos and sell a lot of books with quite low entry threeshold).

4/2 ‘narcisstic’ part deals with the reference frame (which is always Western, usually British, German or French one, the RUssian variant is an imported one, not ‘native’). So it is a vision of ‘political reality’ (as a ‘real reality’) strictly through the Western gaze. completely ignoring localities and peculiarities of the matters. Usually pretty ignorant in relevant topics

5/2 like e.g. Ukraine, RUssia, CE-E Europe, Asia atc.It is not surprise because the roots of such ‘realism’ are deep in colonial mindset.
The rest you can find and research by yourself 😉

(a) Alright, I see. Political realism assumes that the national state is the basic entity, with its objective interests, attributes and behaviours. Geopolitics, balance of power, colonialism, European narcissism and all this jazz follow naturally. Then – 30 years ago – we finally arrived at the global economy, the role of the national state diminished significantly.

(b) We are nice global democratic family now and waging wars is simply not (or shouldn’t be) profitable anymore, realism is dead. And here comes this odd professor with his mothballed arcane theory. I understand the sentiment.

(c) BUT: what we see in and around Ukraine (and Taiwan) now is completely against the globalism. A very real major conflict, sanctions, rise of nationalism, trade wars simply cannot be explained within the paradigm. It shouldn’t have happened in the first place and if it did then the model doesn’t reflect the reality. Okay, no model is perfect.

(d) So it boils down to the question if this is just an anomaly, minor deviation, and once this crisis is mitigated (I don’t know, glorious Kherson offensive leading to regime change in Russia, and shocked China kind of implodes) we are back to the normal state or this is the new trend, the globalism is gone, and the 19th century is back (or at least some form of regionalism).

(e) Ironically Fukuyama is writing now that okay, maybe global liberalism wasn’t exactly victorious so, well, maybe the history continues after all. And if it does RealPolitik – for good or bad – is still very much relevant.

I think somewhere deep in the Pentagon vaults there is an old and half-mummified Chinese scholar who at some point paused appropriately and then declared: “Employ the Kill with a Borrowed Knife stratagem”

So, the guy who was wrong about almost everything “predicts a long conflict unless something extraordinary happens”. Like everybody else. What a daring prediction !

Truth is, this kind of prediction cannot be disproved:

you know, producing a tautology inadvertly makes you an Oracle 😀

if you read the article, I don’t see your point, sorry. If you didn’t, the author is quite straightforward about his predictions, it was just my lousy summary. ‘unless something extraordinary happens’ – logically it’s a useless statement of course, well done.