Ukrainian forces successfully repelling Russian attacks across the frontline and are able to hit Russian warehouses behind the lines. The situation is far from perfect, but also it’s not a roll coaster for Ukraine. The most critical situation remains Bakhmut, where the enemy is approaching the outskirts. Apart from that, gone are the days when Russian tried to capture regional capitals. We are now witnessing fierce battles for small settlements at the 2015 contact line, with minor gains by Russian forces each day. 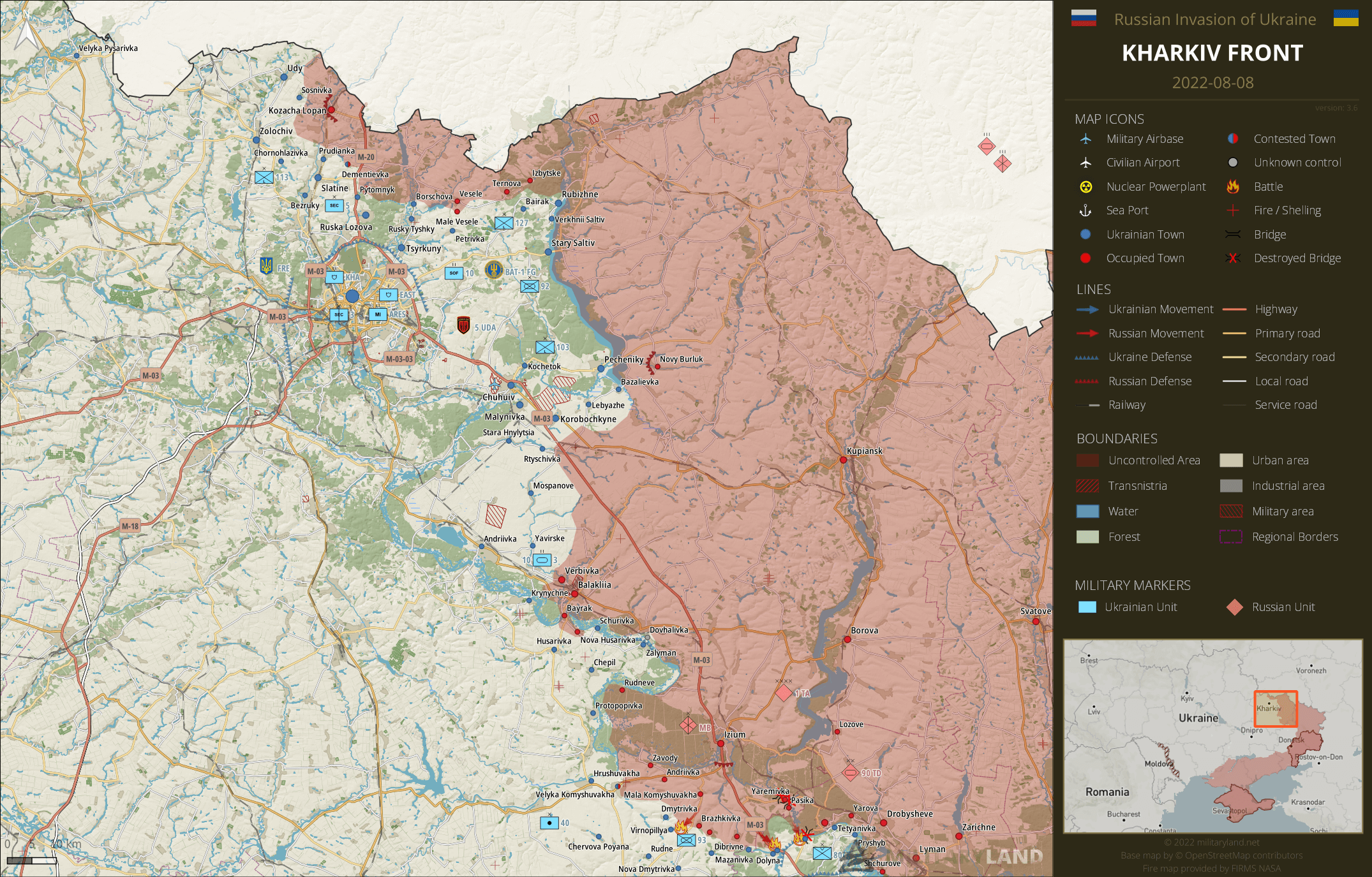 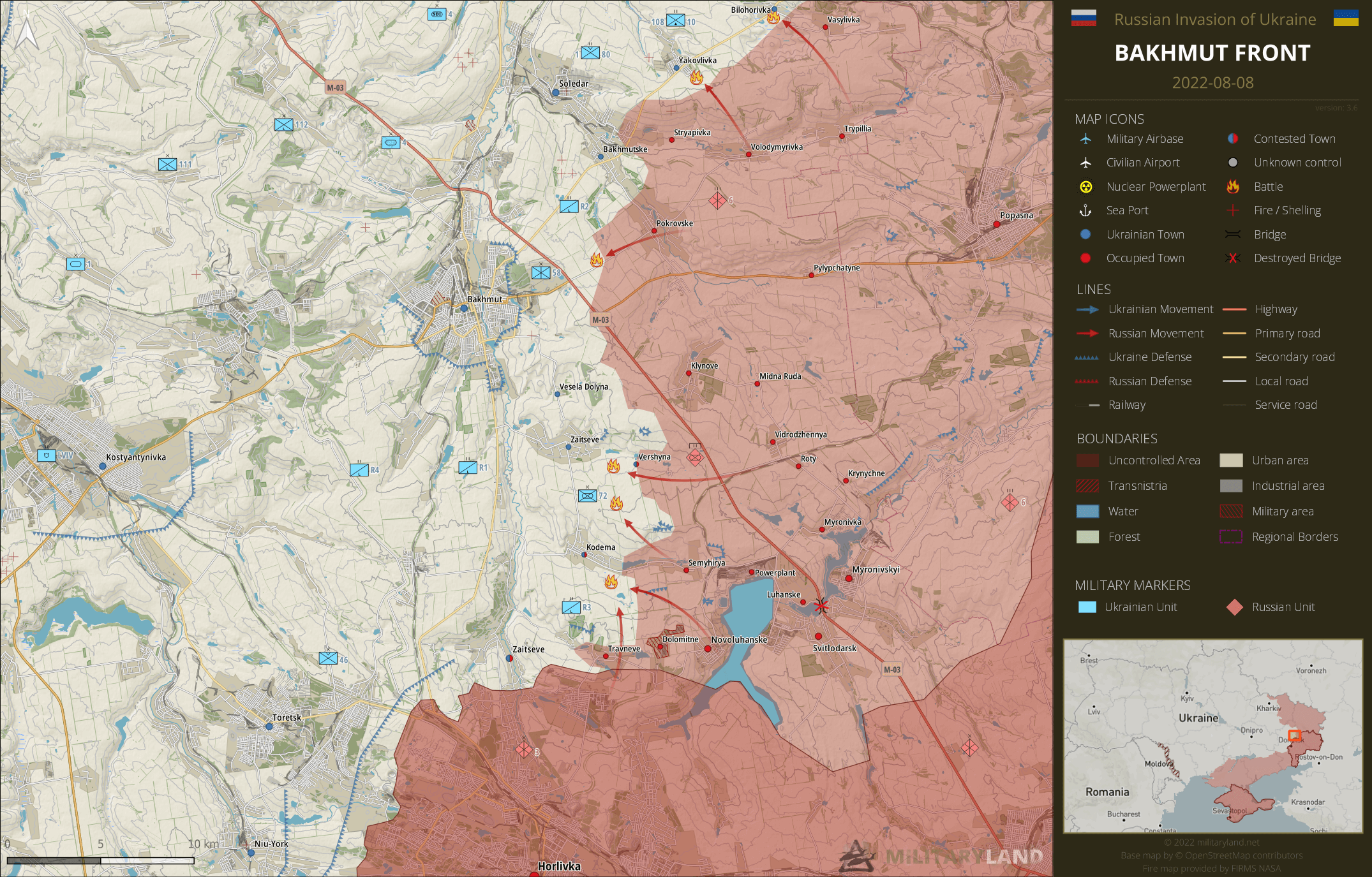 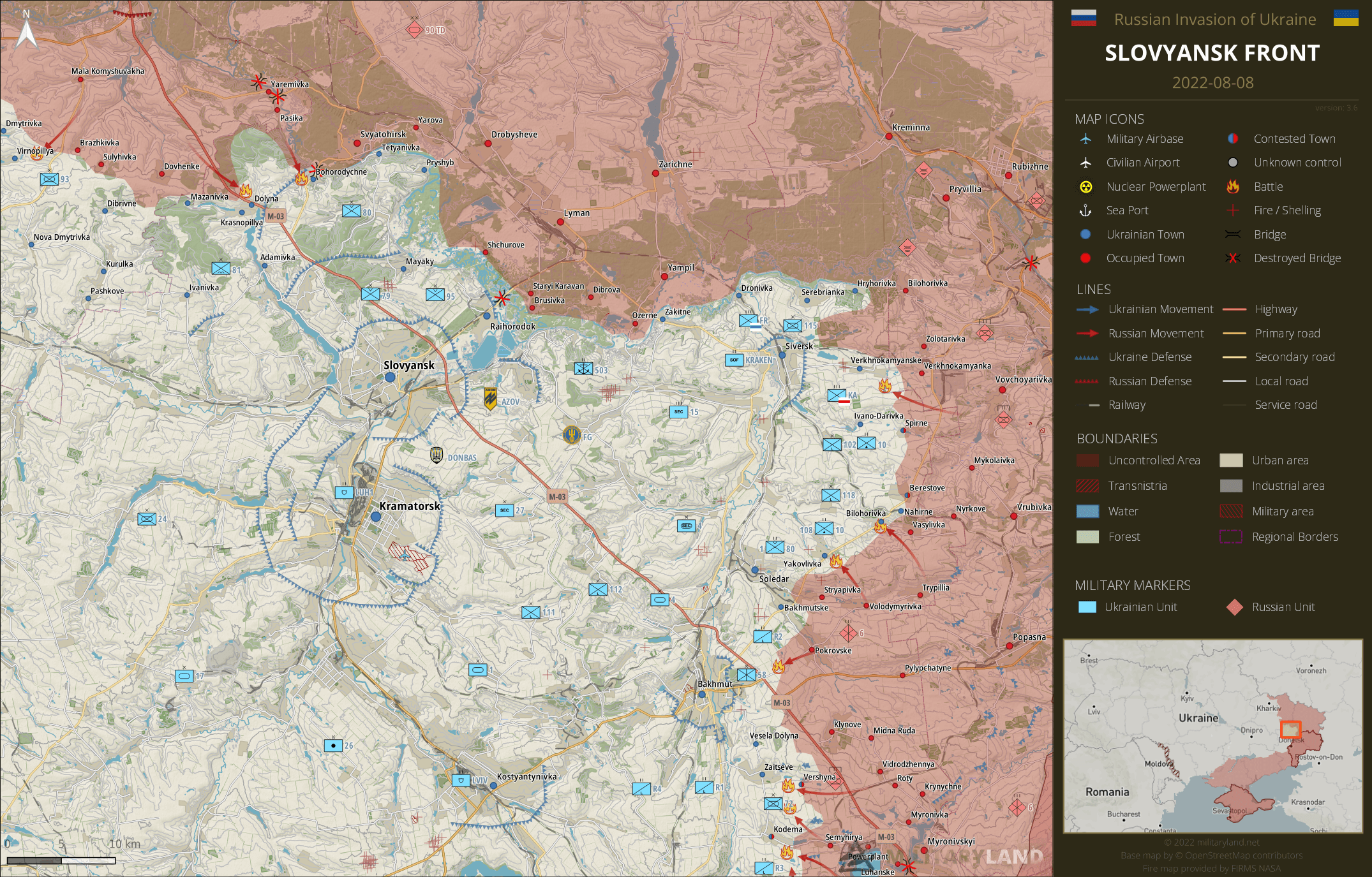 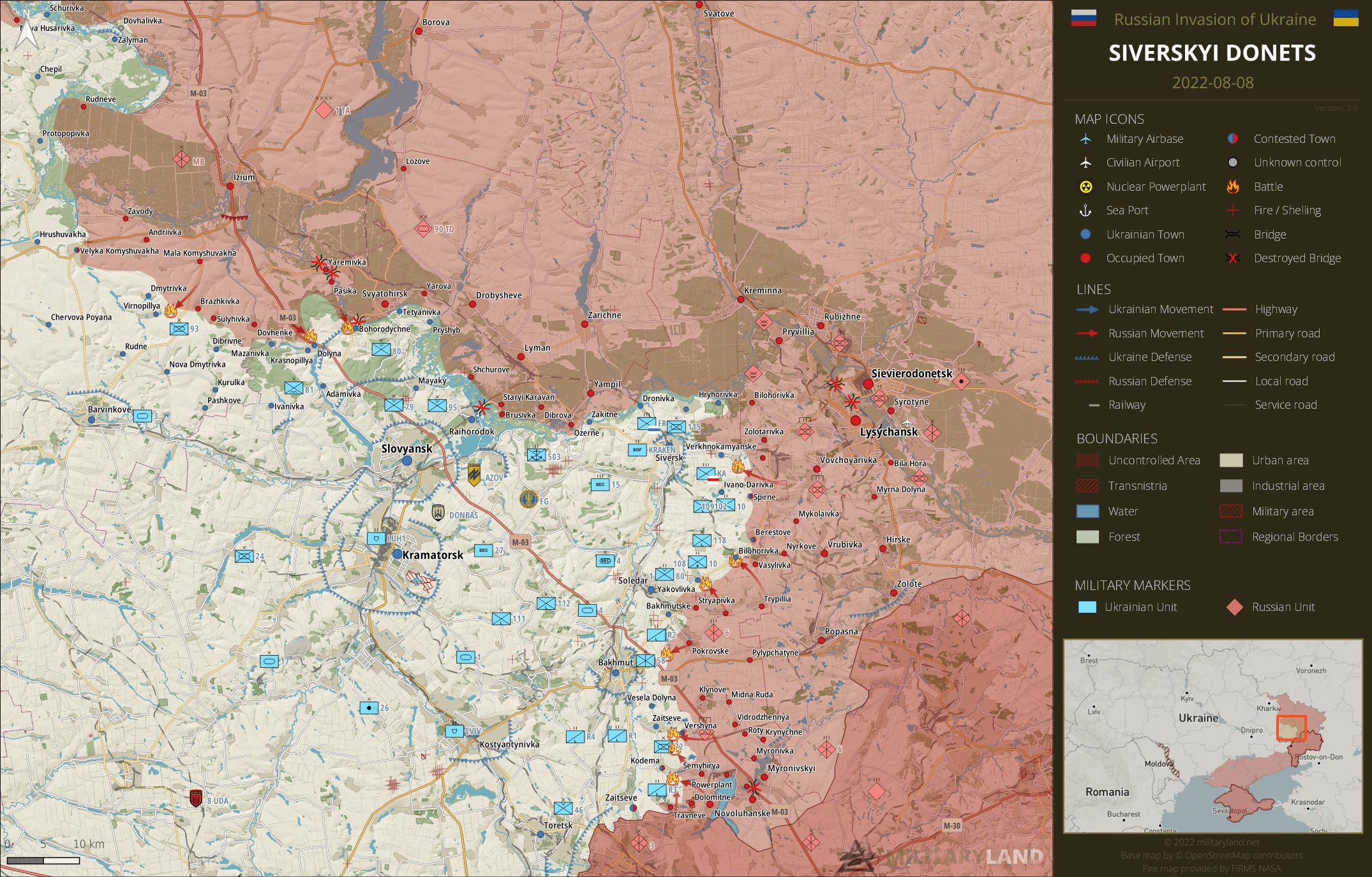 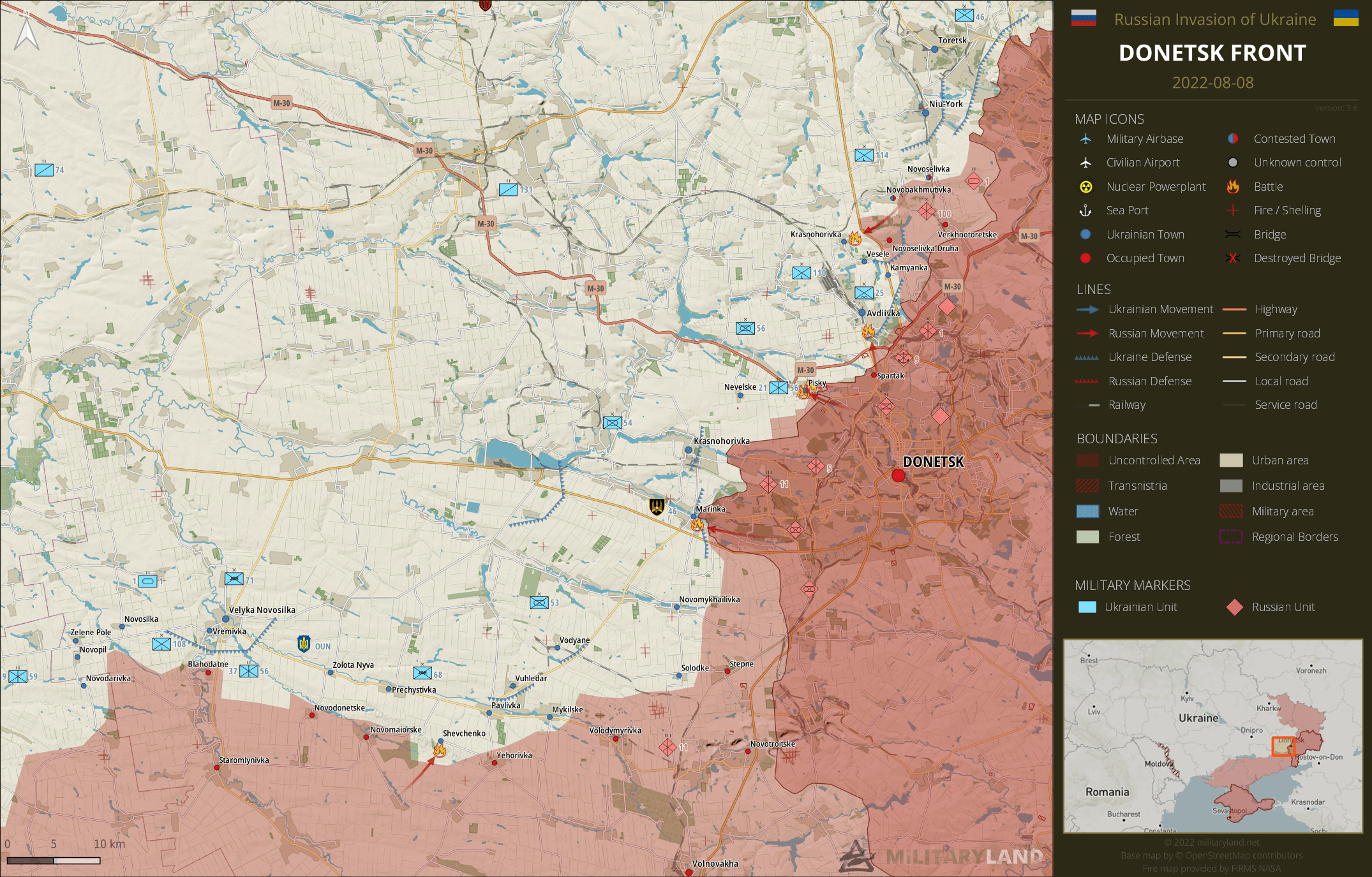 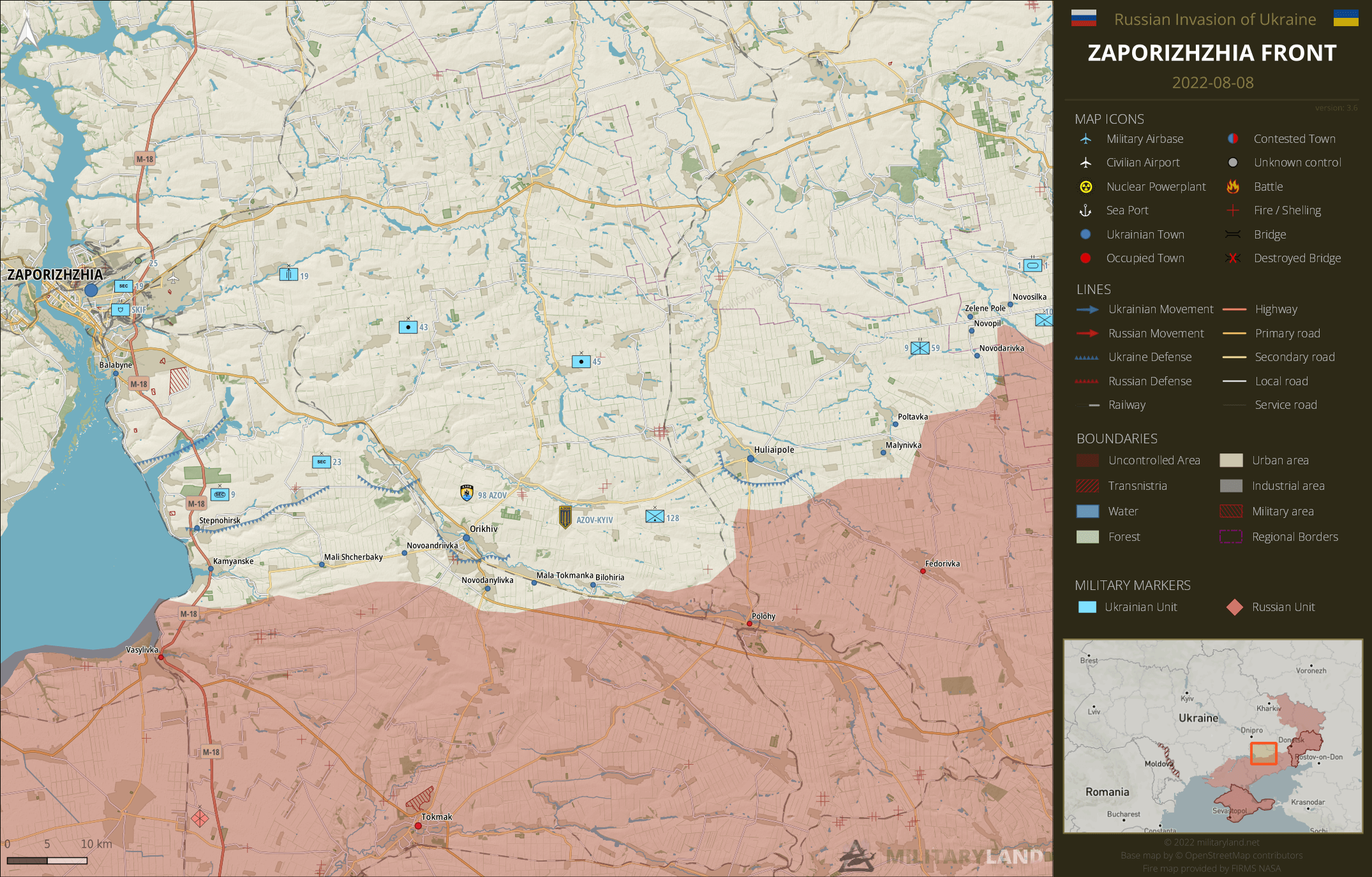 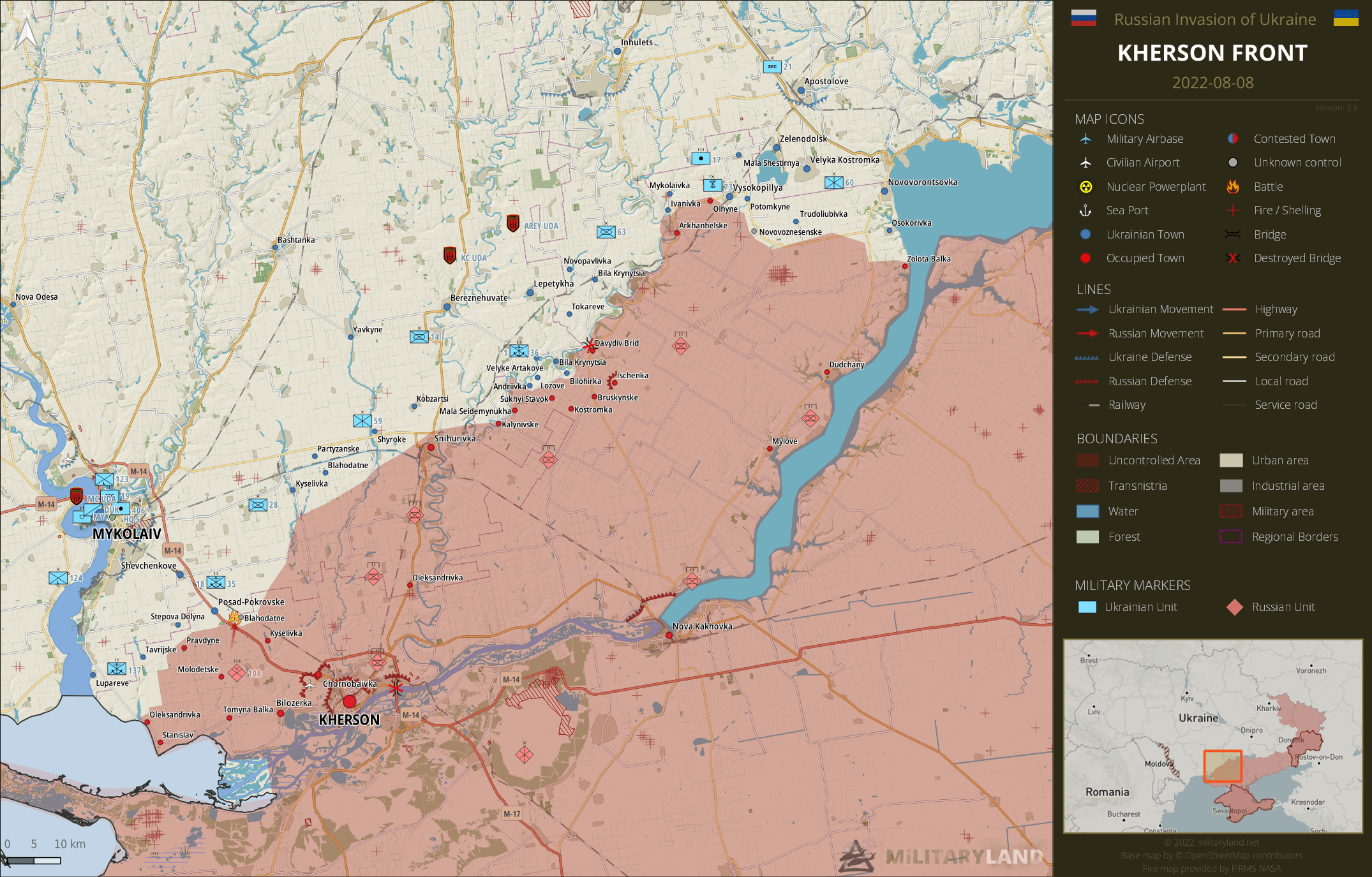 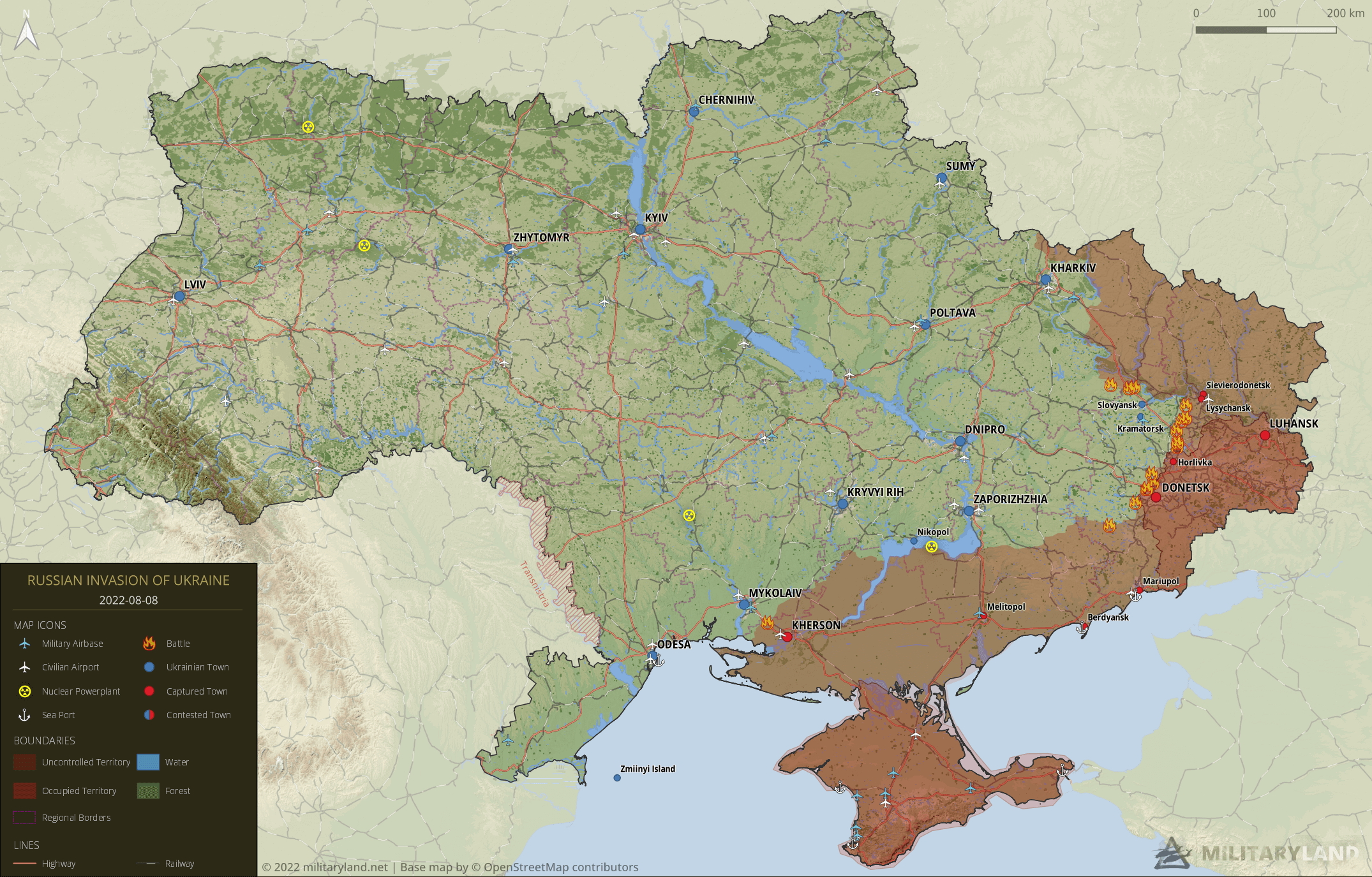 In the south, it is admitted that Russians are trapped on the west side of the Dniepr. But for the moment, Ukraine is only able to hit static points with long range artillery. Hitting 3 bridges will make Russians Surrender ? Kherson is very well defended now, say like Sloviansk, and I don’t see how Ukraine army could take the city without aviation crossing a marshy flat land.

Supply issues do not beat an enemy within weeks. But if the right bank will stay isolated for some time, or even winter (see below, even ferry shuttles may have to stop) i am pretty sure that there will be a surrender. Russian fighting will is not the best, as it stands, and with supply issues the combat power will degrade in will and fire power. No way they hold it the whole winter like… Read more »

Brazhkivka & Sulyhivka are being reported as shelled by RU in the UA Gen Staff morning report. I assume things are on the move South of Izyum.

In the area of said villages. Ukrainian troops are stationed pretty close to them.

Yep, that would be where the counterattack is going at. Denys Davydov said Ukraine is taking a breather there for now, building logistics to secure the areas gained before pushing forward. https://www.youtube.com/watch?v=b3W9-65MYlE

OT Economy: Since people seem intrested, some numbers i digged:
EU + USA keep Ukraine afloat with ~0,25% GDP pledged. It seems that should do the financial job for a year of war, more or less, with military outcome to be seen.
Russia finances can keep this up some years, depending on the oil price. With current rates at high to decent (at WTI 90 now) prices it looks like about 2 years.

I calculated Russia also has troops / material for about two years at the burn rate Ukraine has been reporting.

I personally would half those numbers for a good konservativ measure. Troops is no issue if they go martial law. Which numbers did you use concerning material?
There are a lot of question marks in my calculations, but i would bet a lot of money that russia will have to go to drastical financial measures no later than 2024. I keep wondering why people seem to think russia wins in the long run.

I mean seriously, why the hell should the west back down? 0,2something gdp of eu and usa and half of it flowing into our own military complex. And the further russia degrades, the cheaper it will get while germany predicts it is free of gas problems after 2 winters. Why should the west hand a victory to putin for free instead of degrading russia economically and militarily for this centuary?

Not to mention the political and moral consequnces of a russian victory. I would bet any money that ukraine will end up with at least pre 24.2. lines. It is just a question of time. 24/25 are pretty good guesses as it stands. I sure hope we bygotal western hypocrite assholes will give ukraine a fighting chance to make it quicker.

At Donetsk front, Volodymirivka (NNW of Volnowacha, ESE Vuhledar) is reportedy shelled by Russians on a daily basis since weeks (see liveuamaps). Guess it would be justified to take it as of under Ukrainian control in the map?!

Yes. And same with myrne in kherson area. Probably pravdine under Ukrainian control and myrne on frontline.

There are geolocated videos of Russian positions north of Pravdyne + SAT imagery does confirm that Russians are in control of the town.

There is Myrne settlement right next to Posad-Pokrovske.

In the area of doesn’t equal the town itself.

Mmh. I feel like having read “Russian artillery shelled Volodimirivka” more than once, but anyhow the broader picture surely matters more.

Military logistical question: Won’t logistics on the right bank of the dnjpr become nearly impossible with 1 or no bridge functionel in autumn, winter season? Or is it safe to assume that if russia can handle it in the rest of the summer, it will work in the winter as well?

Ukrain can close the 3 bridges when they want. The question is why they just do small occasionnal hit on them.

They lets enter troops in the kill box and they will close escape road when they decide to close the trap.

Last edited 5 months ago by dolgan
0
0

How do you close a dam?

you can close a dam, but you don’t do that fully because it could break the dam or severly damage it over time and you also don’t shoot at the dam.
the result of it would be that kherson wouldn’t exist anymore like a lot of other settlements
upside: a lot of russians couldn’t escape anymore.
downside: ukraine would lose a lot of sympathy from others.

Disclaimer: i am not an expert on dams

By hitting the bridge before the dam. Or by hitting again the road on top of the dam. The dam will not be destroy by a few himars hitting the road.

And repeat this action each time russia repair the bridges.

Ah, you are right. Looks like the road is on a seperate bridge in front of the dam while the railroad seems on top of the dam. There is also a bridge with road and railroad together over the ship lift.

Bombing any railroad further back will force Russians to dismount the equipment and move them into another train by hand. Takes time. Or they will have to fix the rail, which takes even longer. This is what Ukraine has been doing, also in Kupiansk…

It’s done! The separate bridge was destroyed today, according to Operational Command South.

they cannot destroy the bridges with the hardware they already have got. And I am not sure if complete destruction is the intention. HIMARS can damage such structure (and repeated hits can disable it, though it’s costly) but without heavier missles (e.g., ATACAMs) it’s not doable. TochkaU is not precise enough for the job.

They dont need to destroy the bridges. Juste make them unsable.

Not costly if we compare with the objective.

there´s an additional shipping capacity (can´t reach the black sea) which may be blocked in a fierce winter – as at Dnipro both sides could have attacked the bridge elements – but this will block any own future operational possibililities and furthermore the strategical options (if a side “burns bridges” counterattack is unexpected or -overtaking pursuit- must be avoided ..

Hm, sounds like a difficult winter for russia on the right bank if they stay.

There are two villages near Kherson, about 40 km apart, both named Blahodatne. That has to be confusing even under normal circumstances.

There are many villages in Ukraine called the same name. Yes it is confusing

There are lines and icons on the map: “red arrow” – (Russian movement) and “flame” – (battle).

Yes, on map incorrect Blahodatne.
according to ru tg channels, they are attacking northern Blahodatne from the side of Vasylka (and Kalinovka)

It’s possible I made a mistake. Care to share the source?

I dont see mention of blahodnate here. This blahodnate is deep behind frontline. It was annouced the 07/08, by UKR report. No mention of snihurvika or partyzanske associated.

For me its safe to presume attack west to snihurvika and attack on blahodnate are 2 independant event. And safe to presume russia attack the town on the frontline, and on the principal road, not the one behind frontline.

also pls check https://t.me/rybar/ summary for 6 August with Map. Couldnt send post, cause that chanel restricted at my country. Can send only image

Yep. Partyzan’ske was mentioned in the same context, so definitively Blahodatne approx. 10 km west of Snihurivka

yes, we should make a petition for the Ukr Parliment for adding the numbers for these damn towns and villages, they are bloody confusing.