The hottest points remain Avdiivka and Pisky, where the Russian army throws on Ukrainian defenders everything it has in the area. Meanwhile, Russian troops have advanced closer to Bakhmut and one of the key battles of Donbas is ahead.

Ukrainian forces liberated Dibrivne and advanced closer to Izium. Russian troops lost the initiative and are on the defense in the area north of Slovyansk. 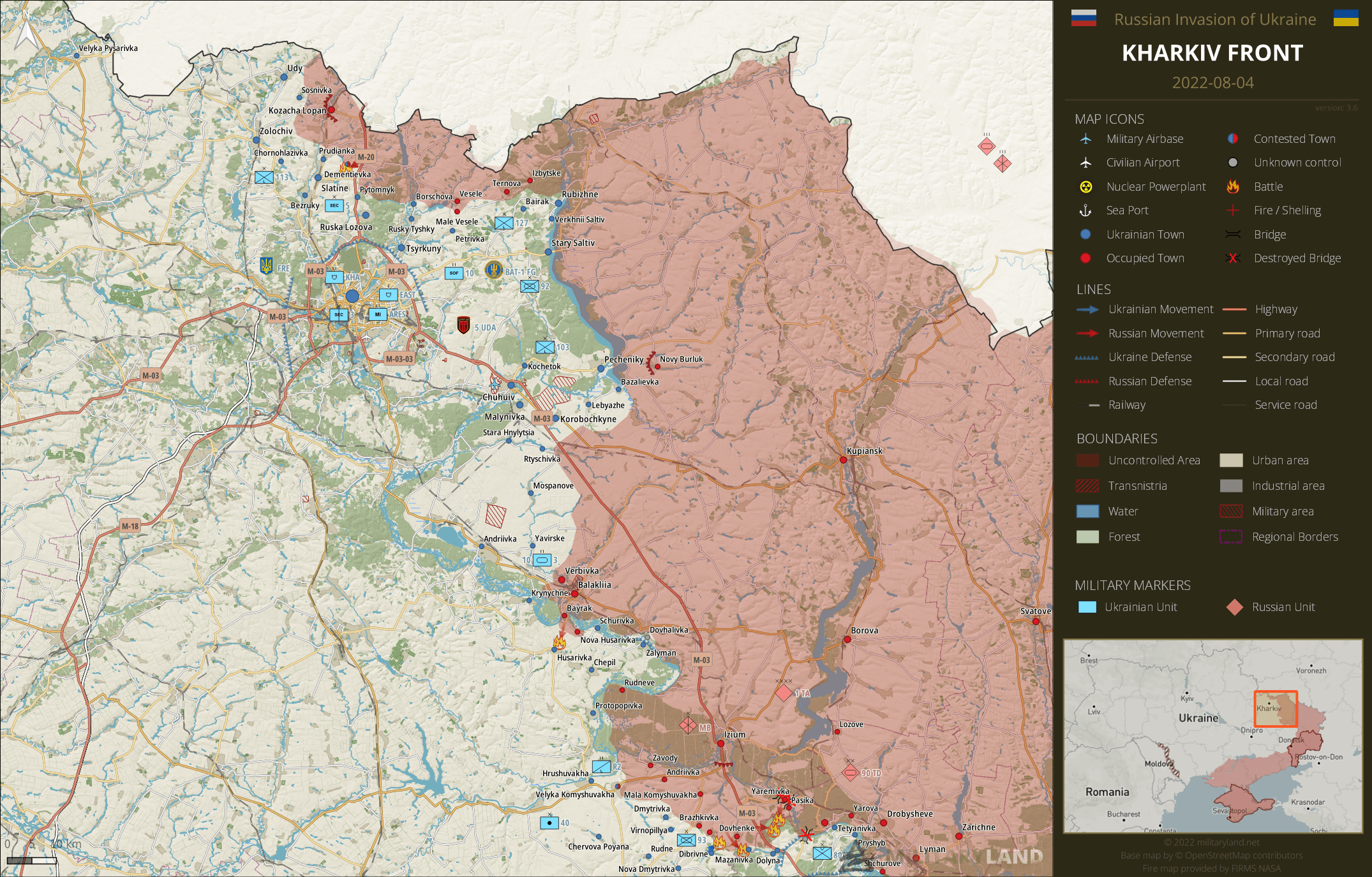 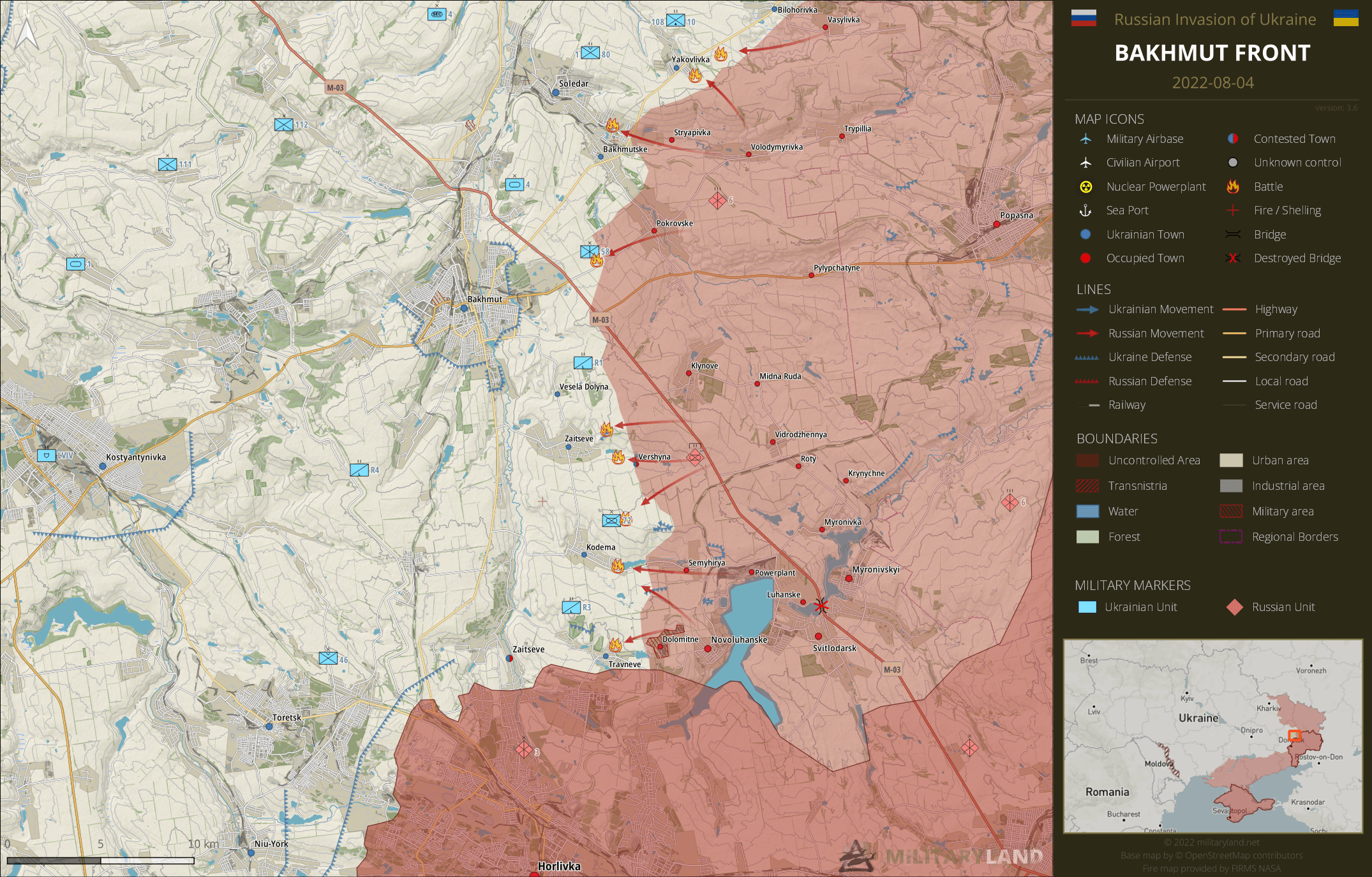 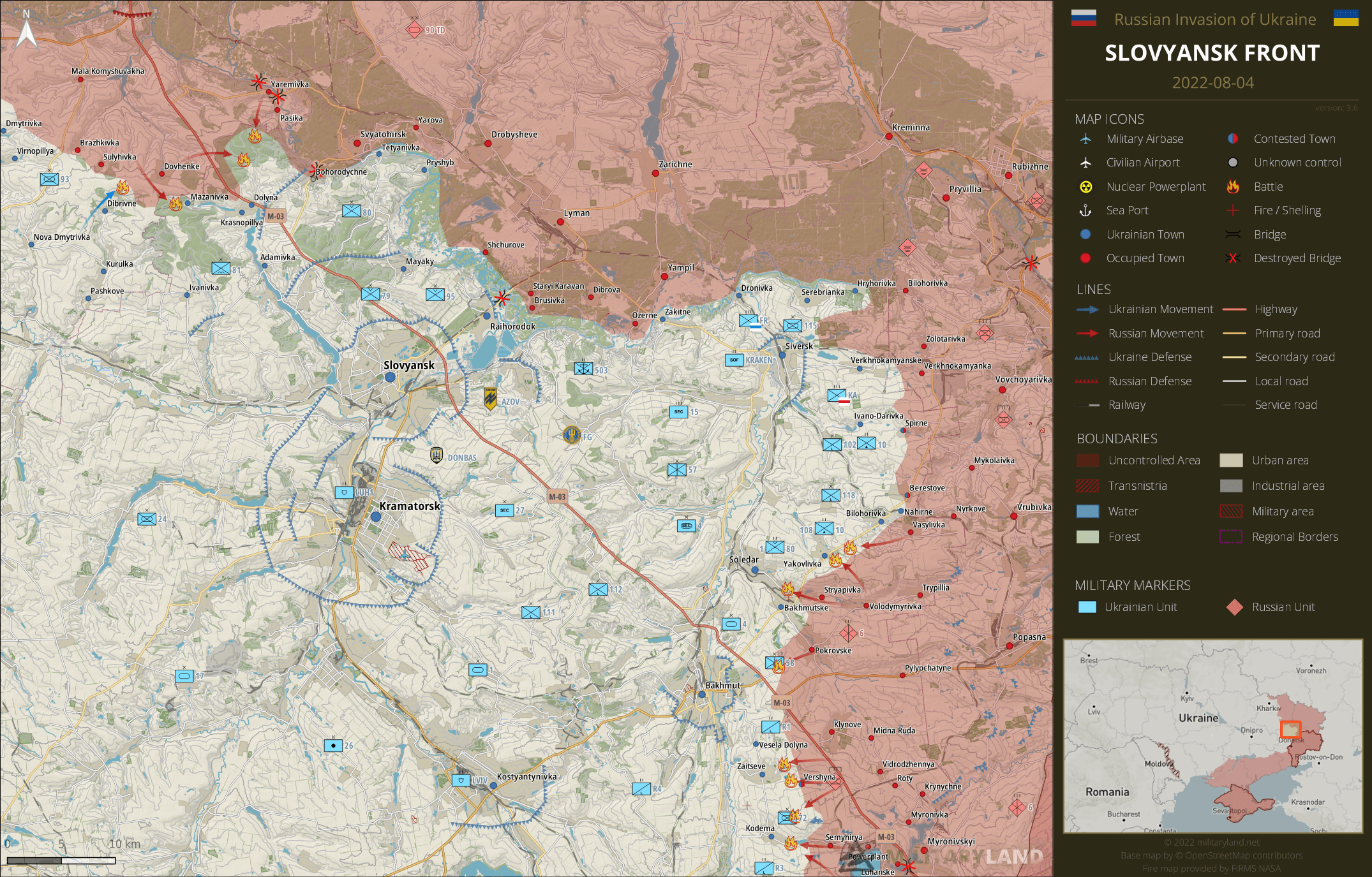 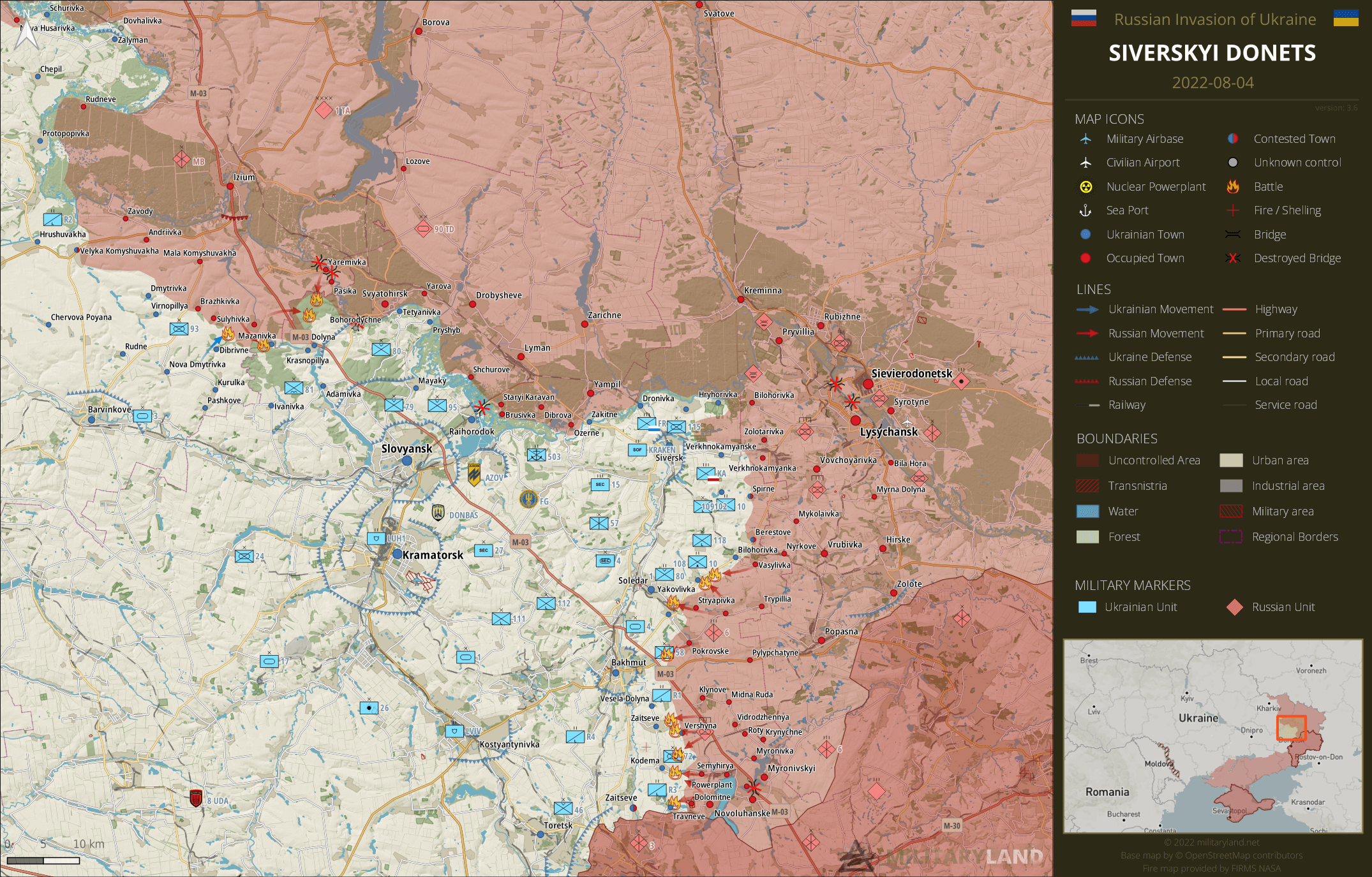 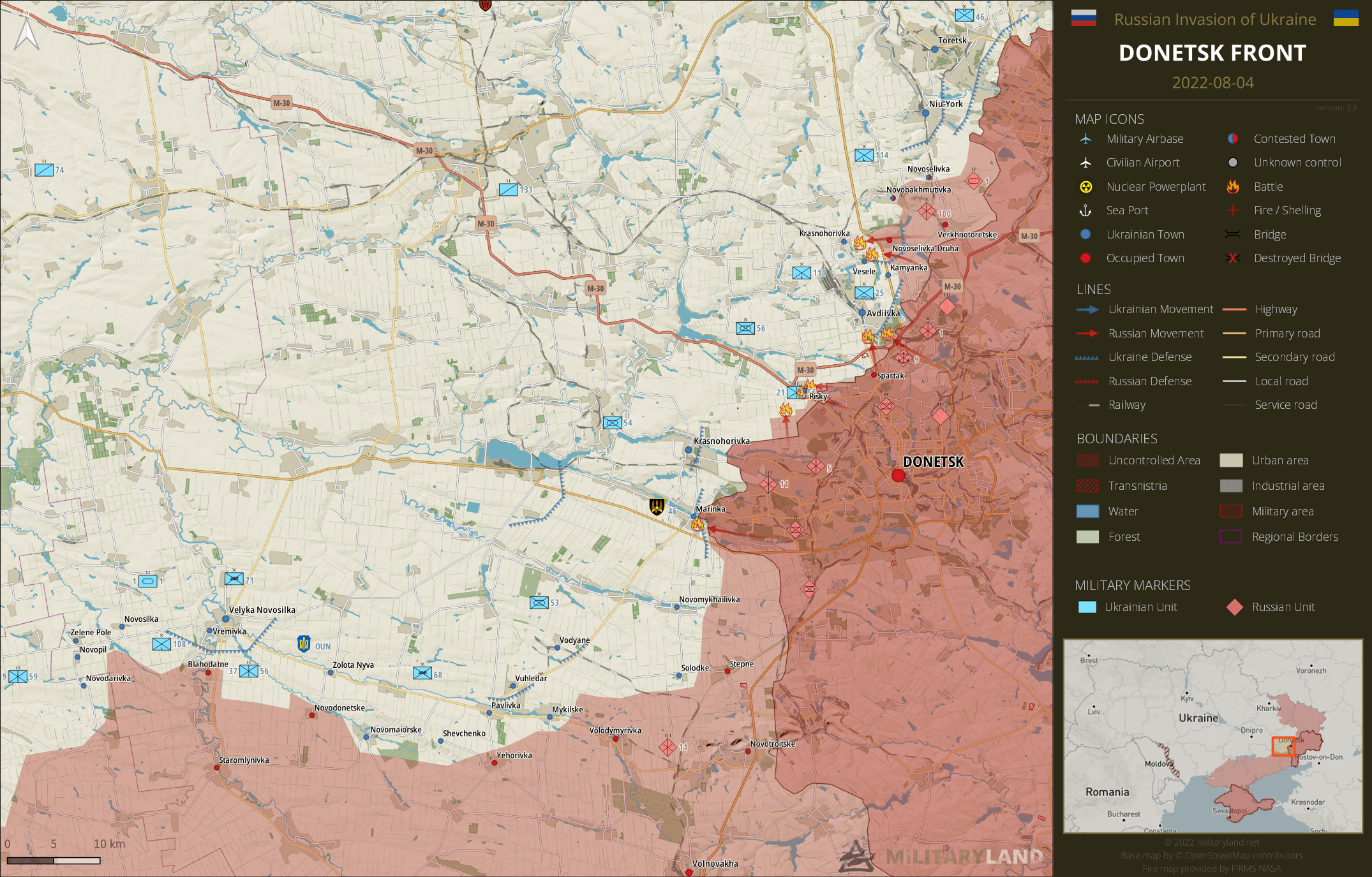 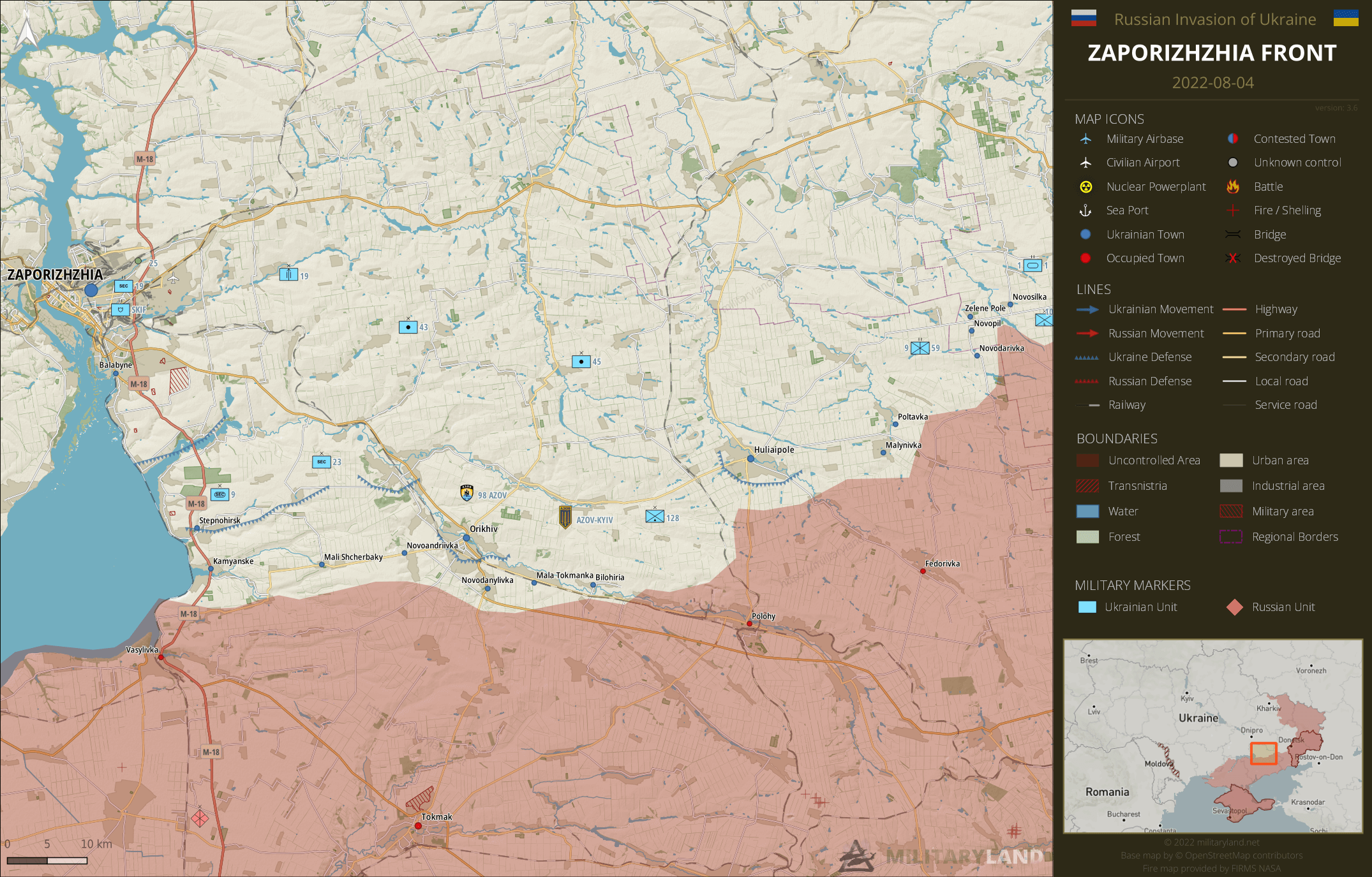 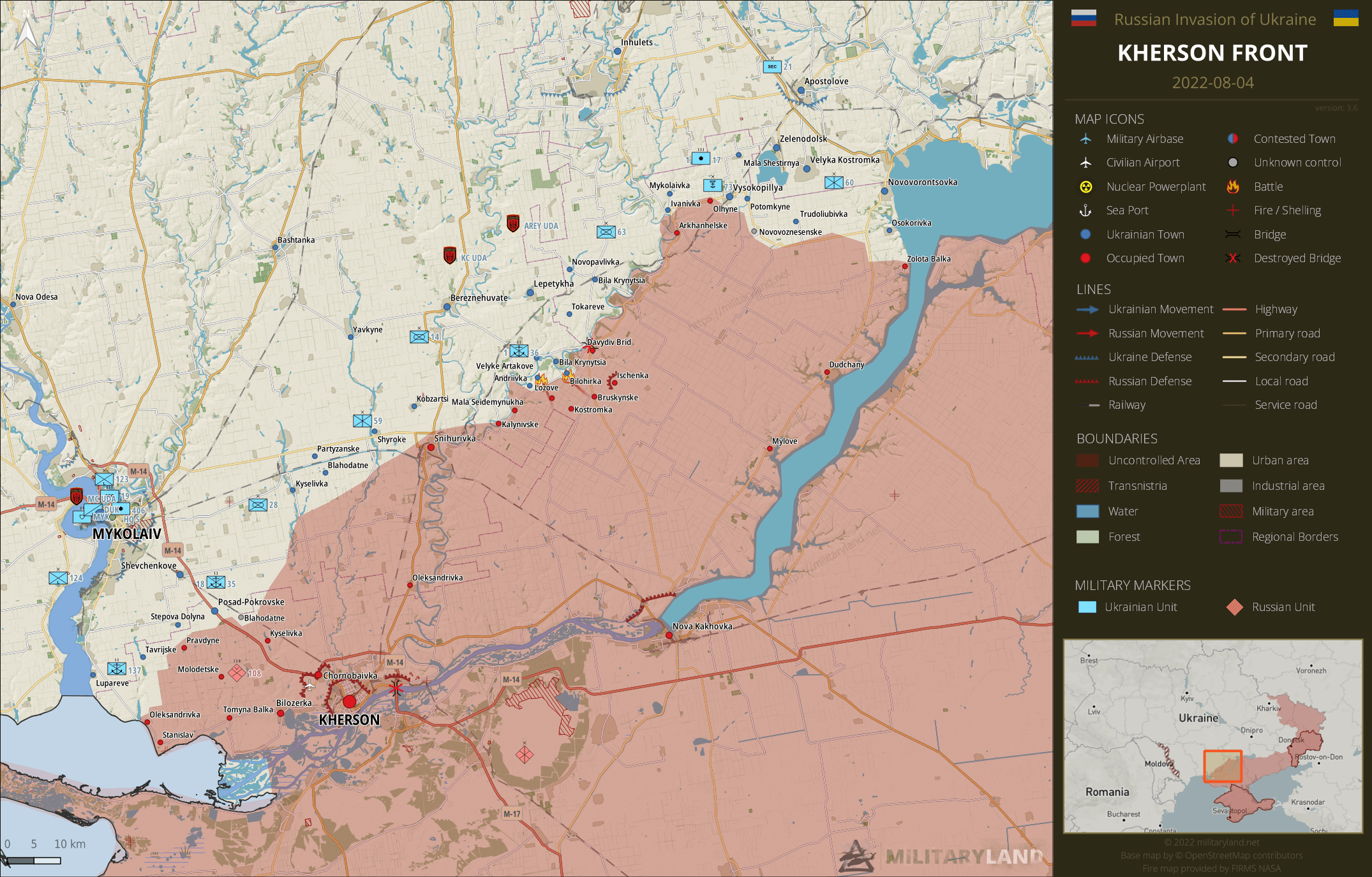 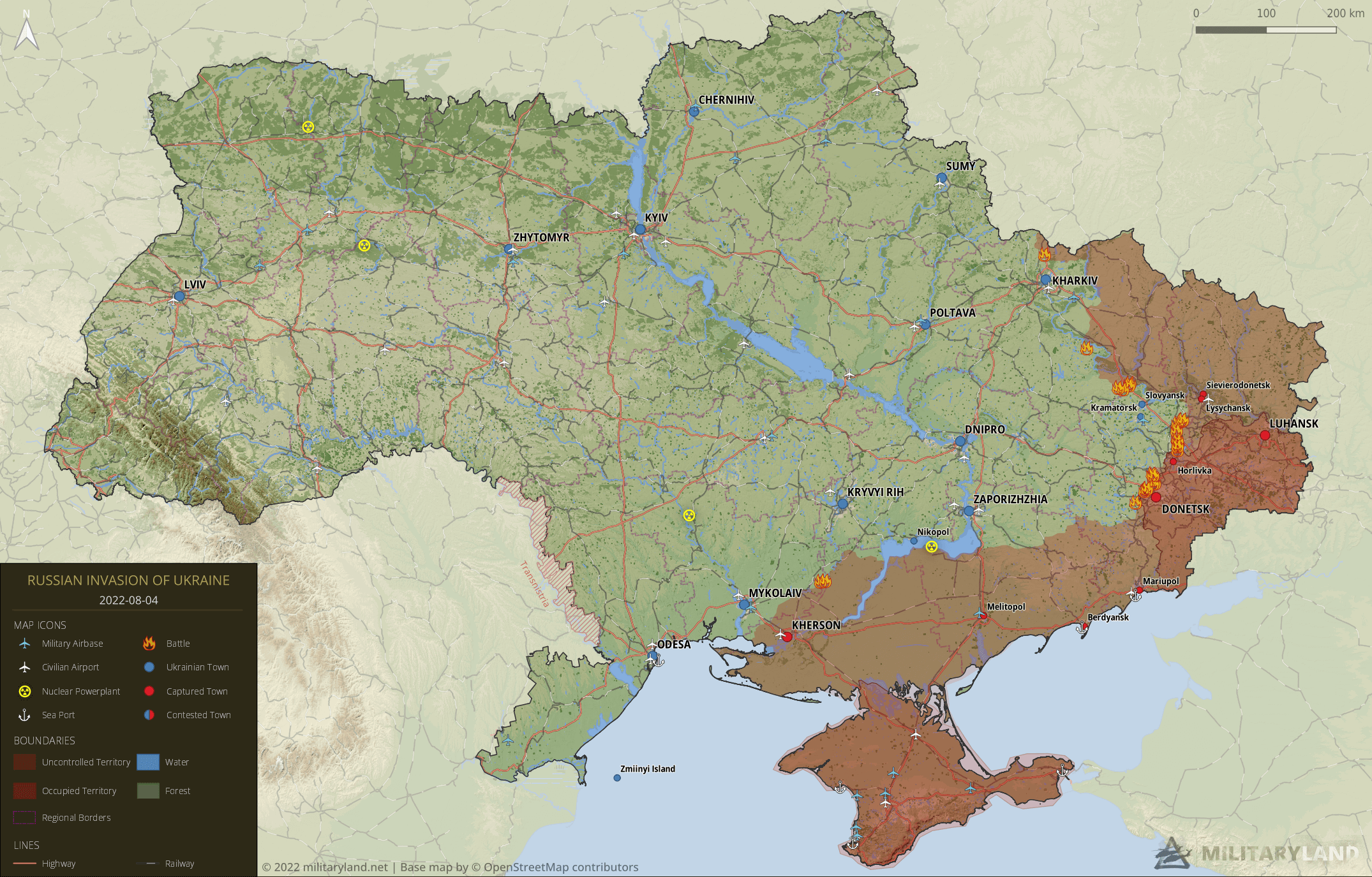 Ok, best case scenario for the RUS: by Sept 1, they take Pisky, Marinka, Bakhmut, Soledar and Siversk. I don’t see them capable of more. As for the bad scenarios, there are too many to mention.

Unfortunately, I fear a worst case scenario in case your bad case scenarios for RUS indeed arise: Zippo-preparation of NPP Zapo ready to be blown could mean hot war turns into war of nerves: “Accept my victory or take total destruction.”

A nuklear plant is not a nuklear bomb. And the Best way to create a big nuklear problem is just to cut water and electricity. Like fukushima.

If you bomb à nuclear plant, you just make local pollution by dispersing nuclear élément. If they are dispersing, no risk of critical event.

Definitely, you can regulate the scale of devastation to some degree. But the principle of blackmailing with a NPP equales a nuclear bomb. Almost certainly effective in gaining time to carry out an annexation and to place the annexed territories under the ‘formal’ protection of the atomic shield.

In case of usage of such blackmailing, however, we would know the RUS to be at serious threat of defeat on the battlefield. Alternatively, the costs of a continued war would be judged as too high by the Kremlin.

As for Bakhmut, entirely possible it falls within weeks. Sloviansk, not so sure… they seem to have hit a roadblock and aren’t even able to gain back the Pasika pocket. They just don’t have the manpower from multiple fronts like they do in the east.

None of these sounds more realistically to me. Can’t even imagine them taking bakhmut or siversk. May be soledar. Pisky and or marinka would be noteworthy breaktrhus after months of trying. I would tip on soledar, may be.

I think they are able to reach the river who is the main defense lign. But not more without lots of new BTG.

they may take Bakhmut. Judging by the news, they see that, it seems, demolishing the town altogether equals capturing it. Like Mariupol.

There are reports of repeatedly shelling of the Zaporizhzhia NPP by russian military. According to liveuamaps: “three hits were recorded on the site of the station. The nitrogen-oxygen station and the combined auxiliary building were damaged”.

Do you have a source for that? I’m struggling with finding convincing proof for that right now. Nothing found but an indirect claim yet.

You can use google translate from Serbian https://t.me/SrbijaRusija/2488

they also already have taken Siversk (3 times), so – reliability of their claims is problematic at best. Girkin (that one) says that did not happen yet. The same story with “battles inside Bakhmut”.

The reliability of the Ukrainian claims is also problematic especially in areas where they are losing and the bakhmut front is such an area. They lost a lot of key positions to hold onto bakhmut for very much longer and if bakhmut is gone than siversk and all the other settlements will fall too.

Ukr MoD is pretty modest and conservative (and deliberately vague ofc). Overenthusiastic – or just fantastical – bloggers/twitter accounts etc. that’s another matter. In the matter of ‘Russian sources’ – always remember the Kursk (and that was the time when independent media in Ru existed).

Its outside of the city. In the wood north of rubizhne.

Its look like russian can send element close to the city. We can not say more.

Looks like russia is giving up on the izyum bridgehead and tries to hold the more important Kherson bridghead while preassuring for anything they can get on the eastern donbas front. They are basically giving up on Sloviyanks and Kramatorsk and with it, on taking the whole donbas.

Maybe you are right, the russians have lost the battle for water, the Donbass will turn into a bare steppe. Donetsk and Mariupol agglomerations will remain without water.

Not if the Russians leave they won’t.

Don’t think that just because they lost one settlement. They have built up defenses in Izium. That city is still vital to encircle Sloviansk and Kramatorsk. They won’t give it up so easily

Mazanivka, Dibrivne, Demytrivka and possibly Borodychne. That is 3,5 of late. But you are right of course. I should have written: “Russia gives up on the idea of pressuring Slovyansk from the izuym bridgehead. They will quite obviously try to hold it for later use.

There is no clear evidence that the RUS have ever been in control of the 4 cities you mentioned.

they will probably try to compose some pressure on Kharkiv from the South (latest incrusion into Husarivka.

What makes you think they’re giving up their Izyum bridgehead?

Losing Dibrivne is not important for taking Sloviansk. I wouldn’t read too much into them pulling out of one village. It could be a tactical retreat or to replenish wounded soldiers from the HQ.

As stated above, we are at 3 to 4 villages and important highground. It is the first time that ukraine takes back considerable terrain in the donbas theater since months. Russia has lost the initiativ on the izyum axis. That is a fact for now.

Not the first time. The area up to Pasika opened up earlier…

I am talking of the developments of the last 1 or 2 weeks.

Pleas can get more information about Hrygorivka? Even Ukraine war mapper now indicates It under russian control.

It’s on my list of rechecks for the weekend.

It would also be interesting to check Travneve and Hladoseve (next to Dolomitne). There is no info about fighting but one RU source mentioned they had brought in humanitarian assistance, thus suggesting those settlements were under RU control.

Hrygorivka now under the control of ZSU. There are occasional fights.