Russian forces mounting one attack after another near Donetsk in an attempt to break through Ukrainian lines at all cost. A meat grinder is reported from Pisky, where Ukrainian infantry defends the settlement without artillery and heavy support. The Donetsk front and the area around Bakhmut seems to be the primary focus for Russian troops at this moment.

Note: At the time of writing this summary, the NASA’s FIRMS server is unavailable. The Fire/Shelling layer is not visualized. 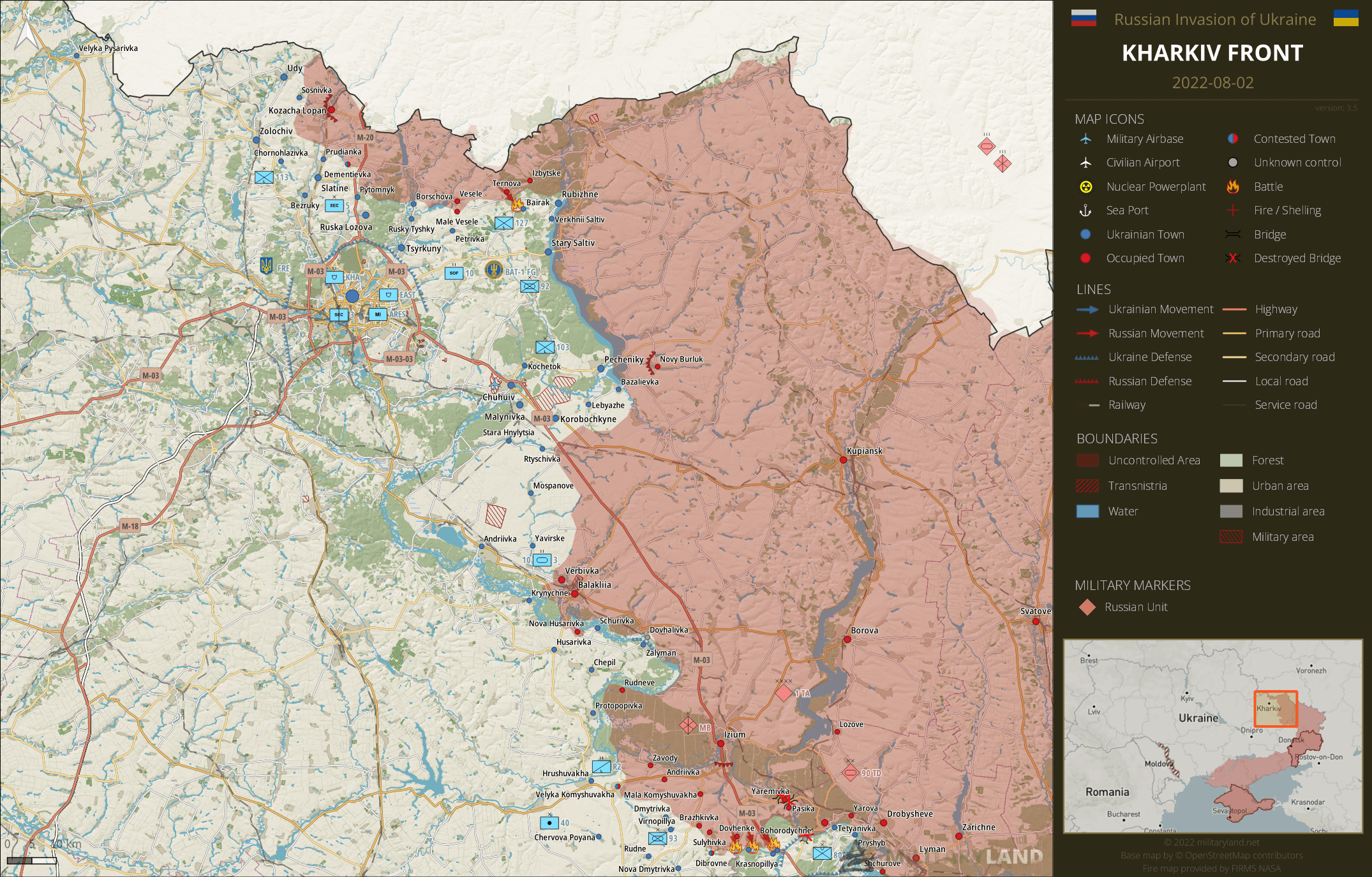 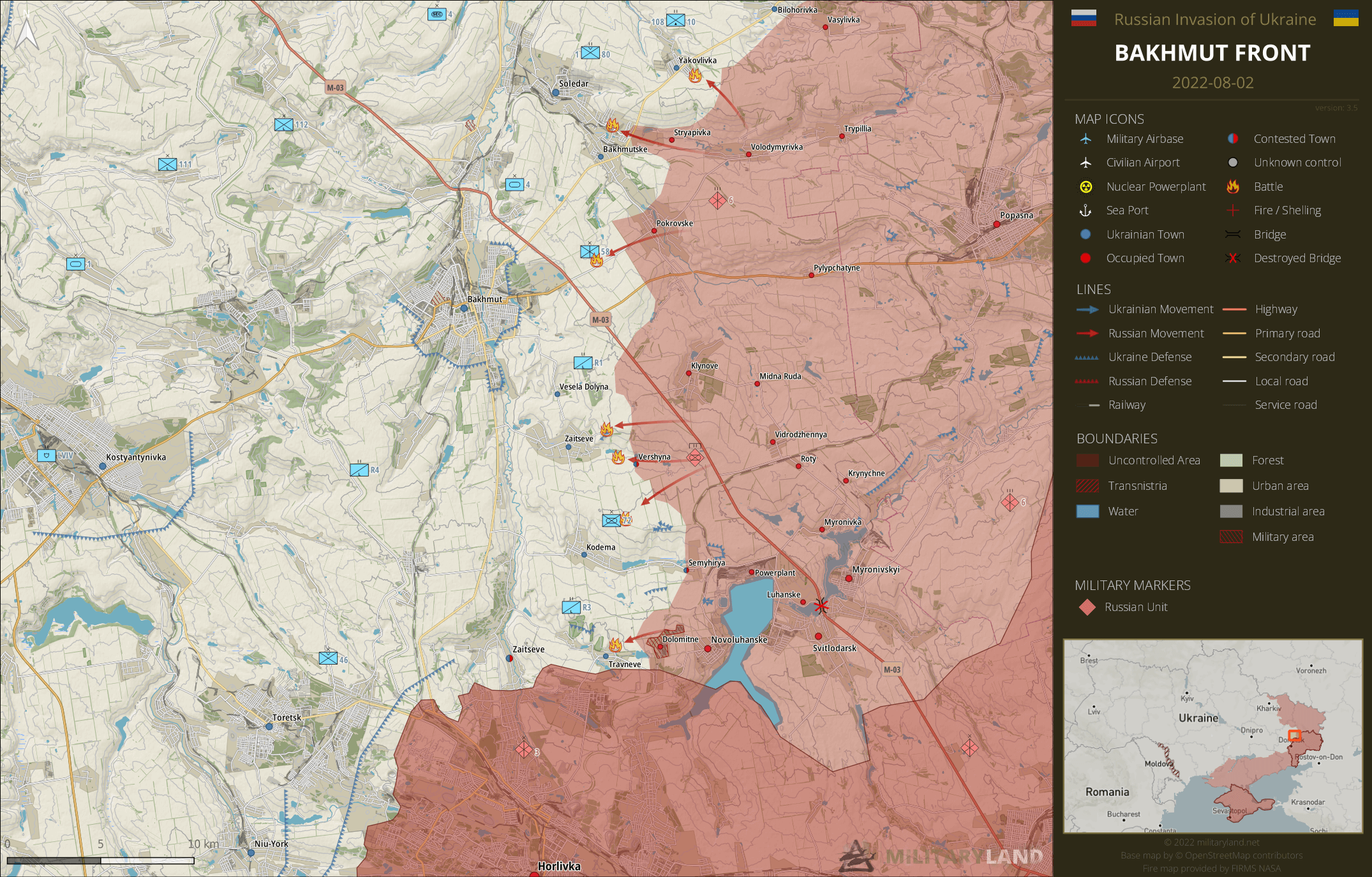 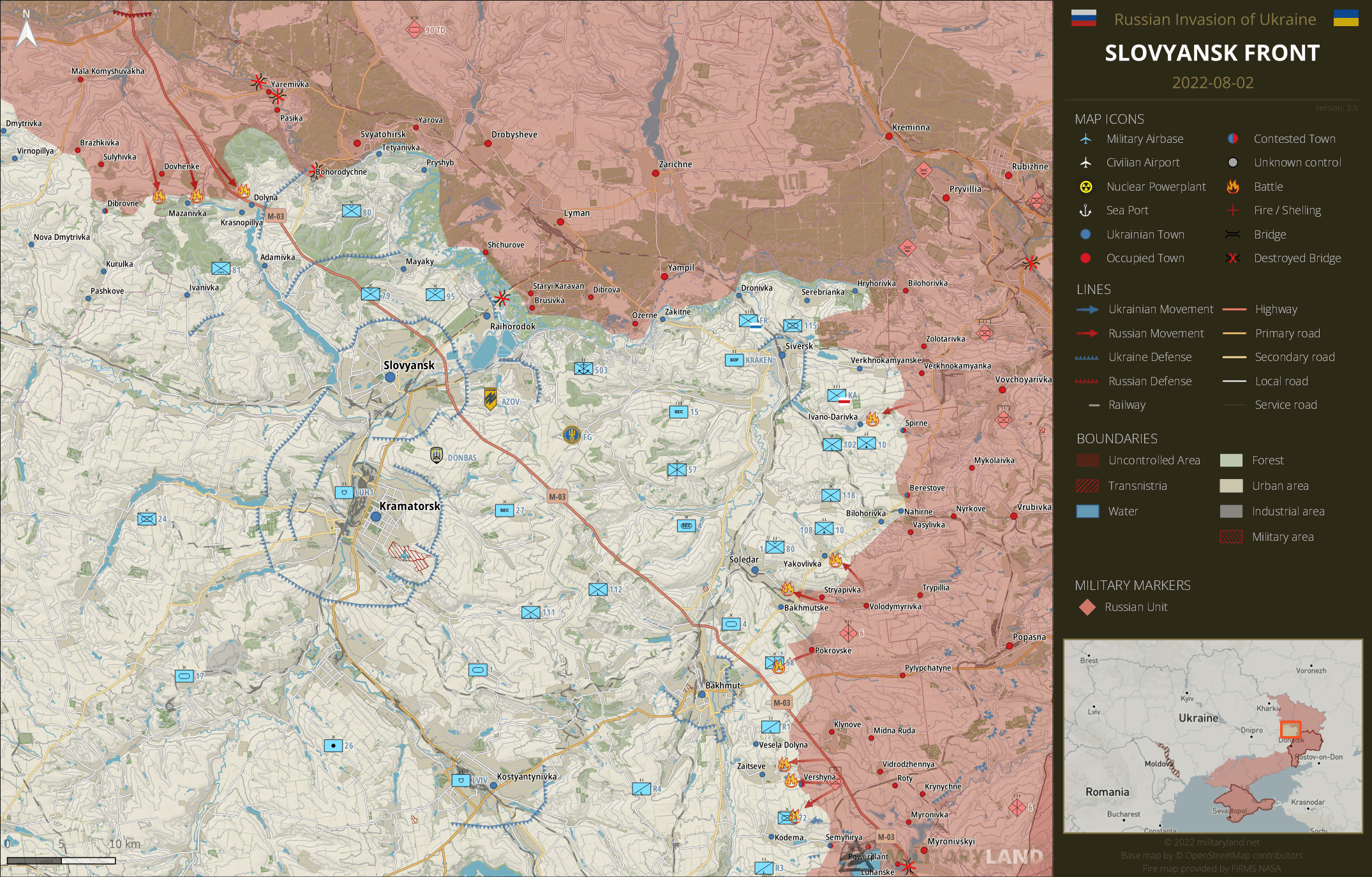 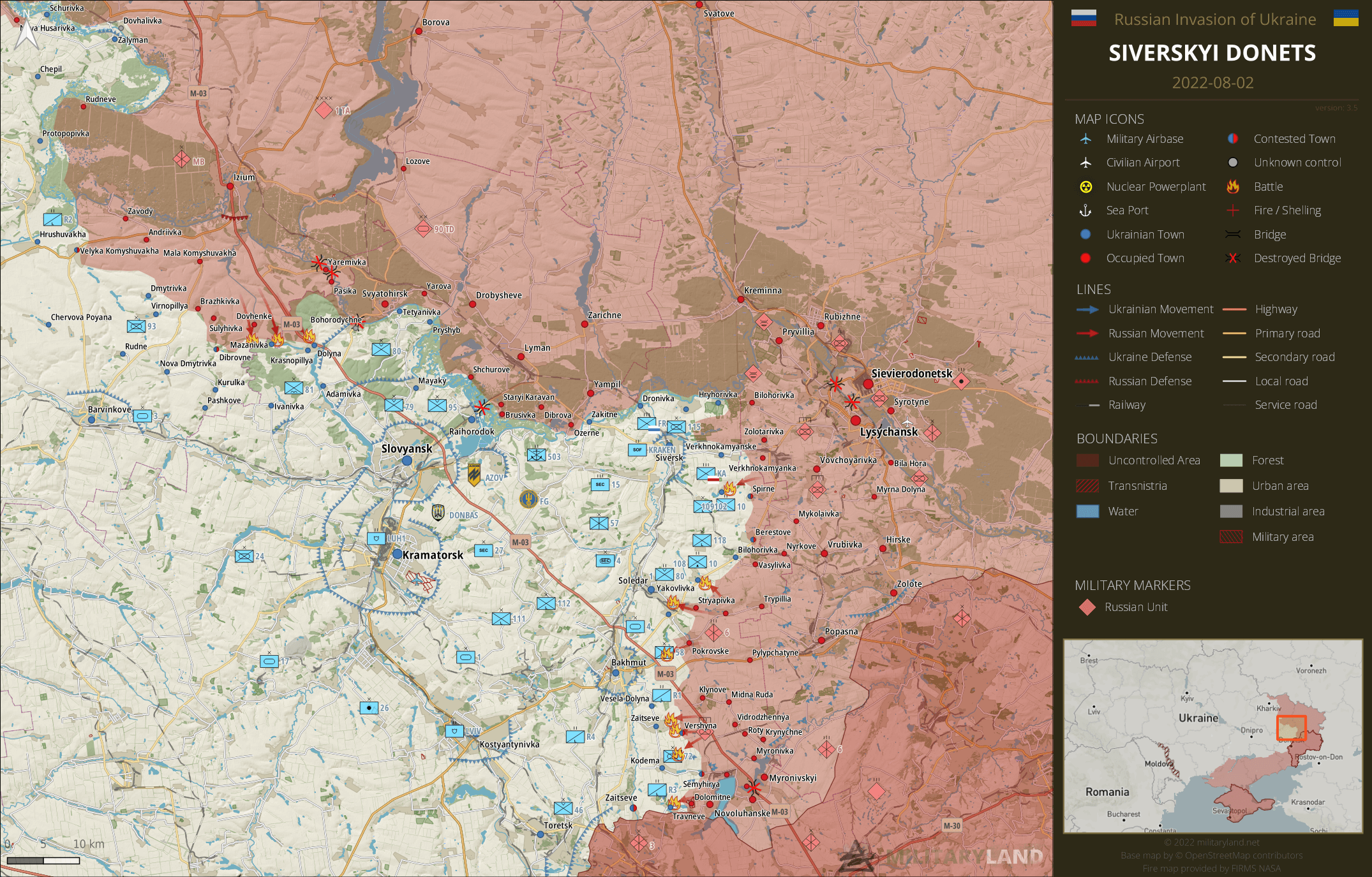 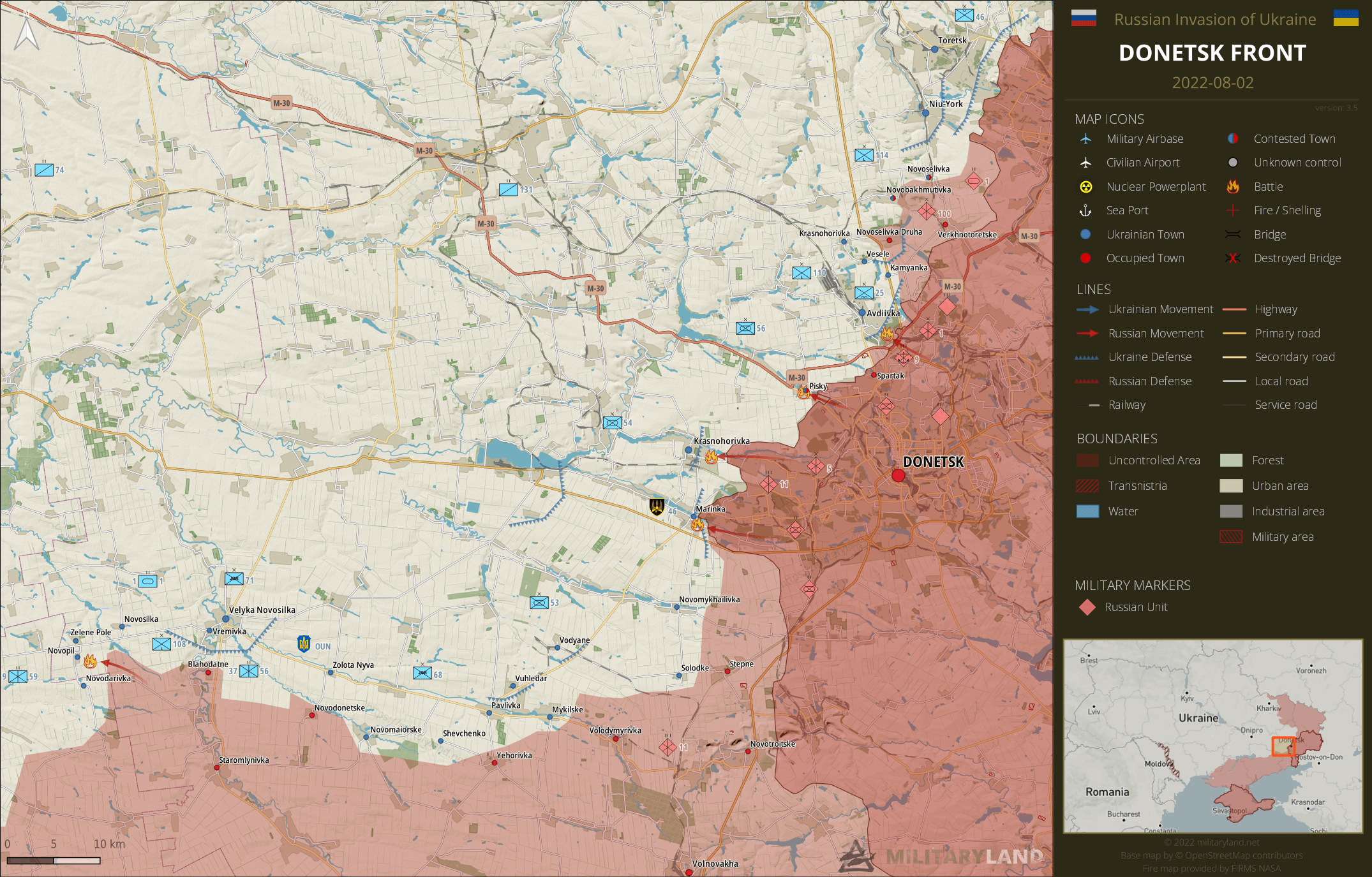 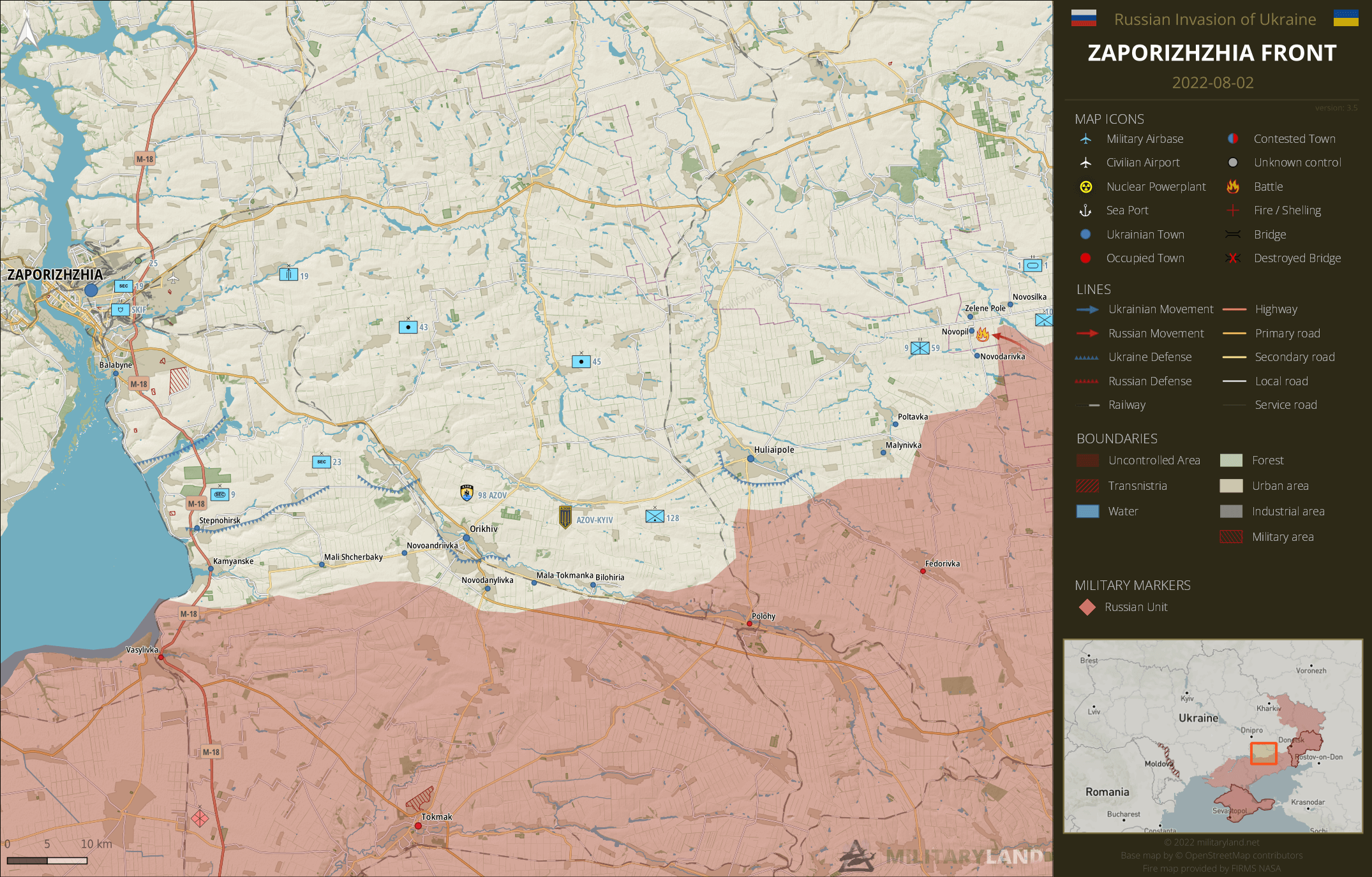 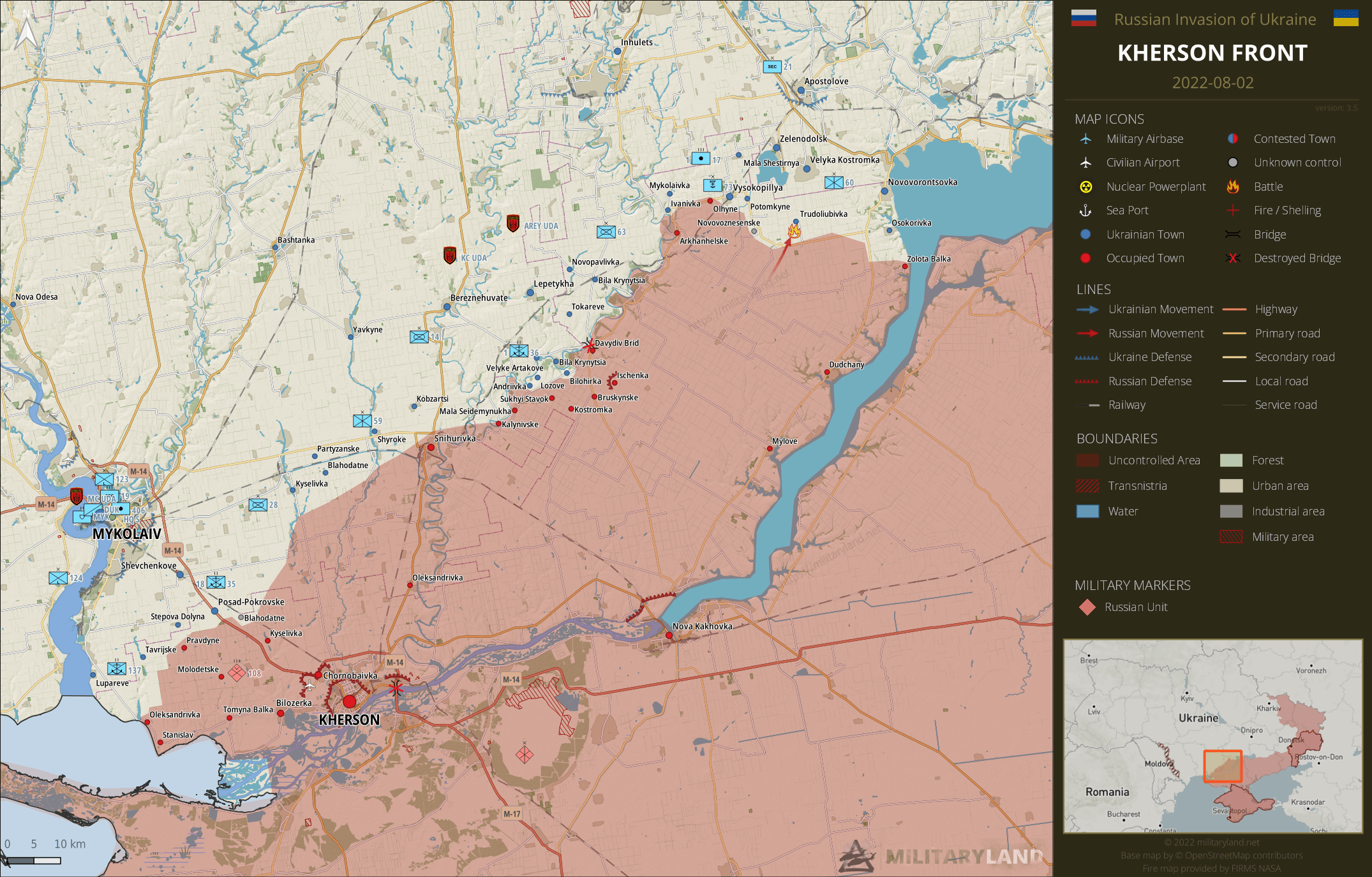 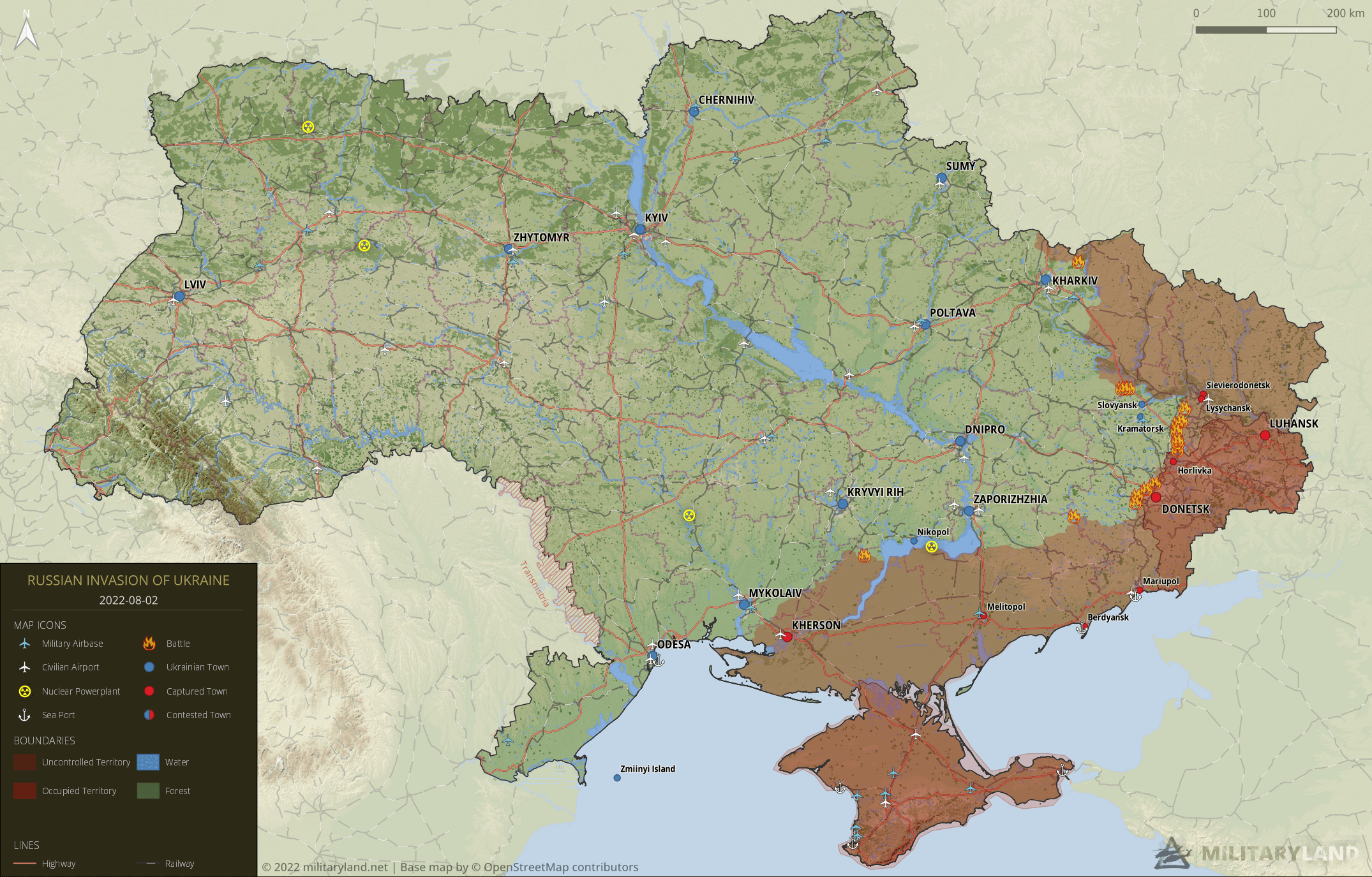 The map is real, thanks to the moderators. The offensive of the russian army on the Donbass front is developing quite successfully, albeit very slowly. My question is whether the existing forces will be enough to crack the defense? And what do the VSU want to counter the increased efficiency of RA?

To answer your own questions, studying a few basic lessons from the Vietnam War should help you.

the main problem in vietnam and afghanistan were the terrain, ukraine does not have such a problem. vietnam is not a good comparison to this type of war.

you could’ve meant something different, but then please elaborate further.

RA is fighting for money at best, UKR for freedom and sovereignty. US soldiers had no idea what they were fighting for in VW, Hanoi was fighting invaders. RA started with ludicrous operational failures (like US in VW) and in total misperception of the resilience of the UKR population (like US in VW)

There is no need to slide into politics, there are different points of view; not only yours is the only correct one. But it looks like you can’t talk about it.

But if we focus on purely military matters, parallels to US in VW can still be seen: The UKR effort is to maximise RA casualties, the RA response is maximum firepower in the area as well as escalations towards civilians. Even the VW tactic of ‘hit and run’ was also observed in some form around Kiev.

I think I know about the history of wars. It is 90% WRONG comparing – between Vietnam and Ukraine.

Indeed, you have not understood the core message. Perhaps hidden in the remaining 10%?! 😉 As a hint for the search: War is politics – its ultima ratio to enforce one’s own interests. Add ingredients from psychology and you’ll get somewhere.

From Siversk to Zaitseve it’s an ‘easy part’. Behind this line are two consecutive (and paralel also) lines of ridges. If simultaneusly Zaitseve, Mayorsk, Kuryomivka (forgive my spelling) won’t be taken with railoads intact in reasonable time, they will outstretch supply lines. Again.

Yes, the terrain is correct. It’ll probably depend on the capture of Artemyevsk and a breakthrough/non-breakthrough under Peski and Maryinka. But although I don’t understand the strategic plan of the genius of military thought Shoigu, I still don’t see what the VSU can oppose at the moment.

I don’t quite understand whether this implies that Semyhirya has been taken. It does not say “in the direction of”.

All 40 Ukrainian peacekeepers are leaving Kosovo: https://www.unian.net/world/ukraina-vyvedet-svoih-mirotvorcev-iz-kosovo-novosti-mira-11927913.html
The article does not mention the reason but I presume they are more needed in UKR.

I think the reason is other: 40!!! soldiers don’t help Ukraine. But off course better than nothing.

Weird messages from Head of Kherson military Dmitry Butriy in Telegram: “According to residents of various districts across the region, the occupiers are very scared.
“They go to the houses of locals and change into civilian clothes to escape from the battlefield.”

I check everyday here for an update, keep up the good work!

just read through the things happening is pisky… man even reading that..
like WW1 but with no chance of firing back.. i can’t even imagine what the soldiers will be like after the war.
if ukraine/russia wins, that wouldn’t be a win in the many books of all the soldiers and their families..

Carnage is the word

There is information that freshly mobilized soldiers are sent in that Pisky meat grinder day after day. If true, that’s very difficult to accept and justify.

It’s a very important element in the Ukrainian defense system in the Donbass.

“There is information” from where? Some fresh reserves were put there, that does not mean ‘untrained conscripts’. Everyone is not experienced at the beginning. RU propagandists makes a big ‘halo’ around this asault (yet another ‘collapse of the front’).

it doesn’t matter if those units are trained or not they are still being sent into a meat grinder with no possible way of retaliation. the information comes from the same soldier that told what is happening there. and you gotta keep in mind that it was a UKR soldier that is desperate for help.

who later stated that ‘the help arrived’. Did you notice that there is something called a ‘war’ going there? Ukr has no ability to saturate the fron with amount of artillery symmetric to the RU. It happened. It will happen again. Write to your representative to send them more ASAP.

yeah you’re right it’s a war.. of course things like that happen, they happend before, now and in the future they will also happen.. doesn’t make life loss more bearable.. war is horrible and will always be horrible.

my representatives are useless.

there is a backup version of the firms working @