Ukrainian troops are unable to hold off overhelming Russian forces in the area of Bakhmut. The enemy is slowly, but surely advancing towards Bakhmut from the southern and eastern direction. Russian army also continues its offensive attempts in the area of Donetsk, but have so far only minimal gains and Ukrainian defenders are able to repel these attacks. 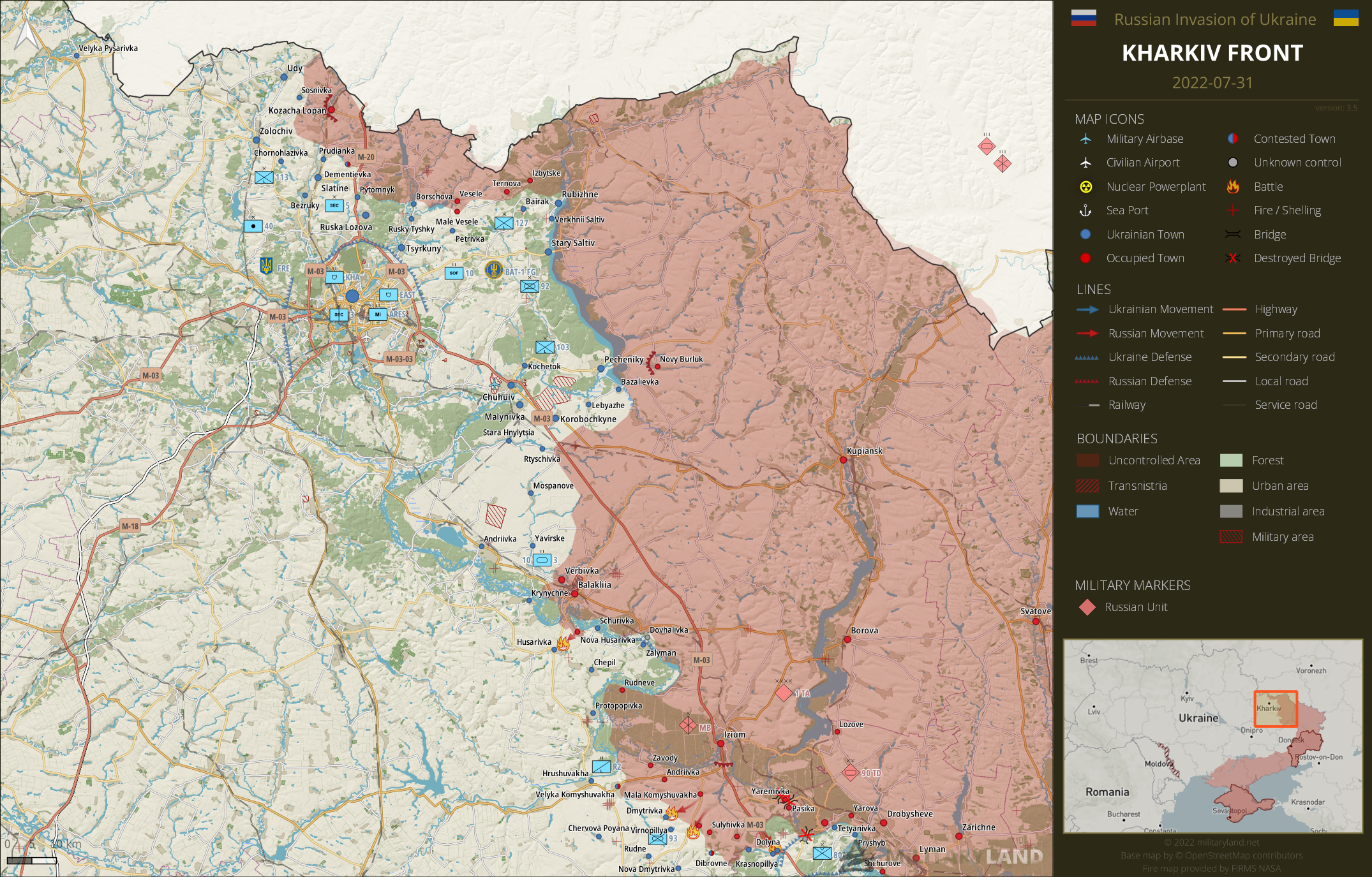 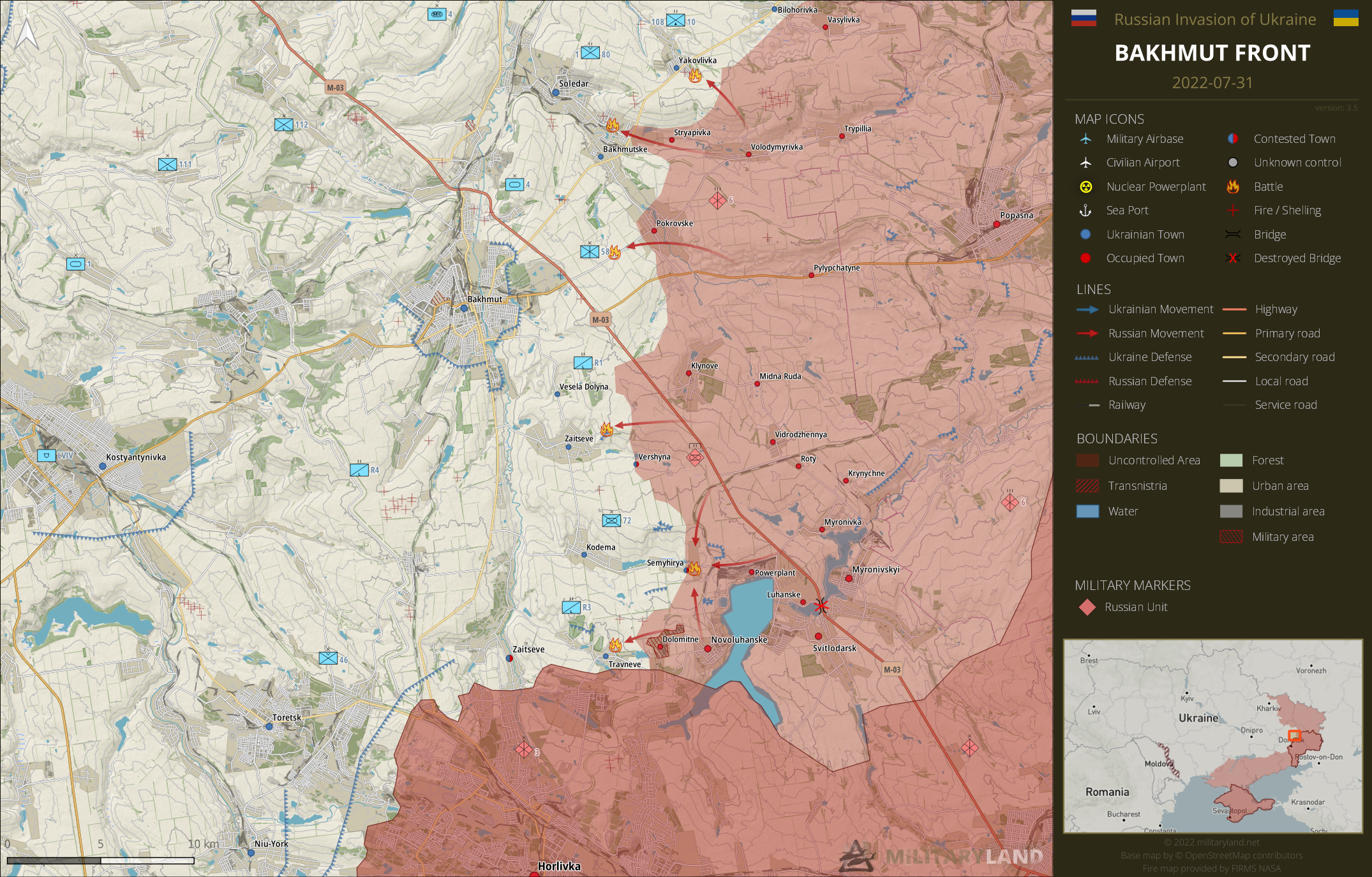 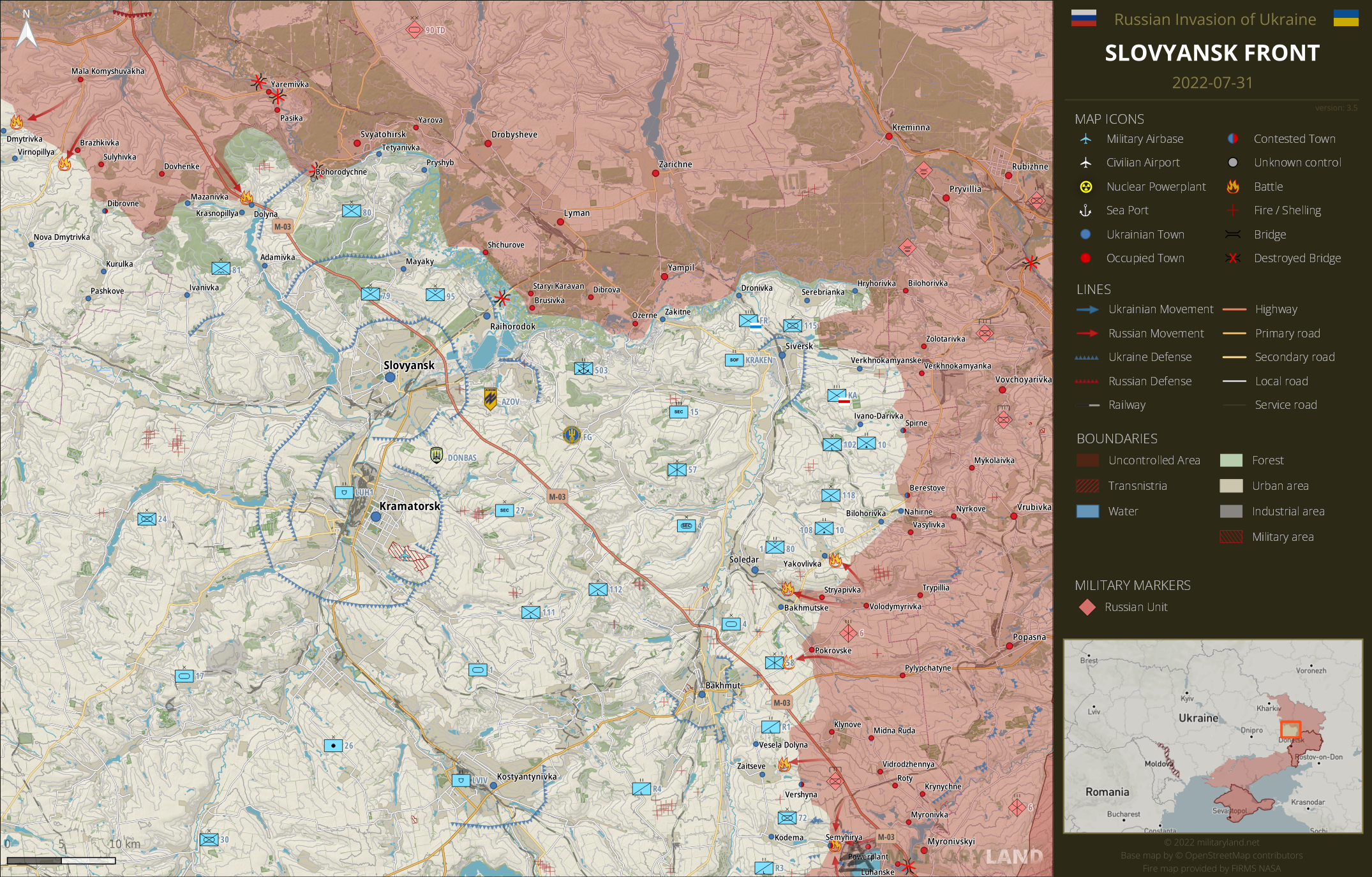 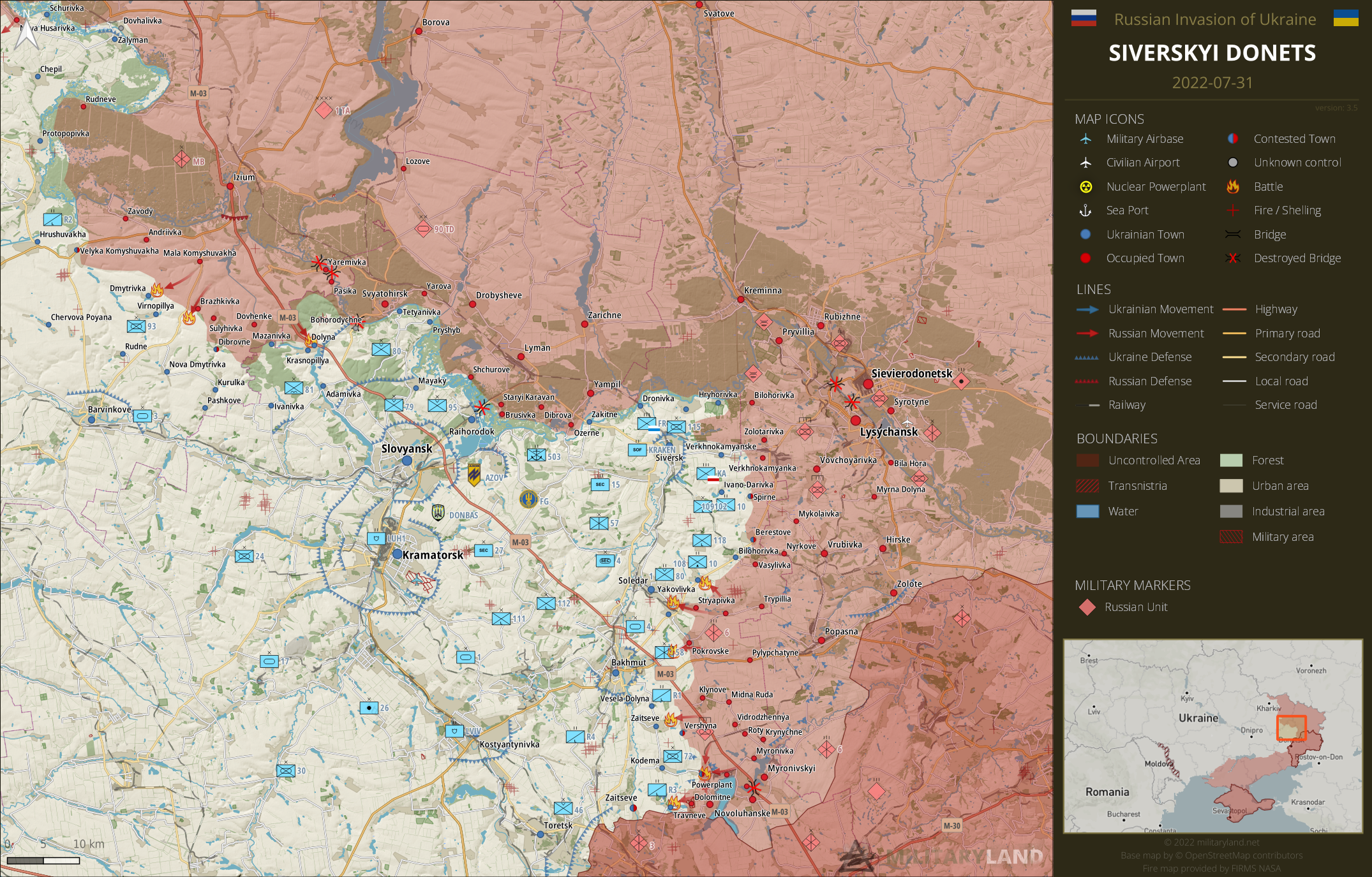 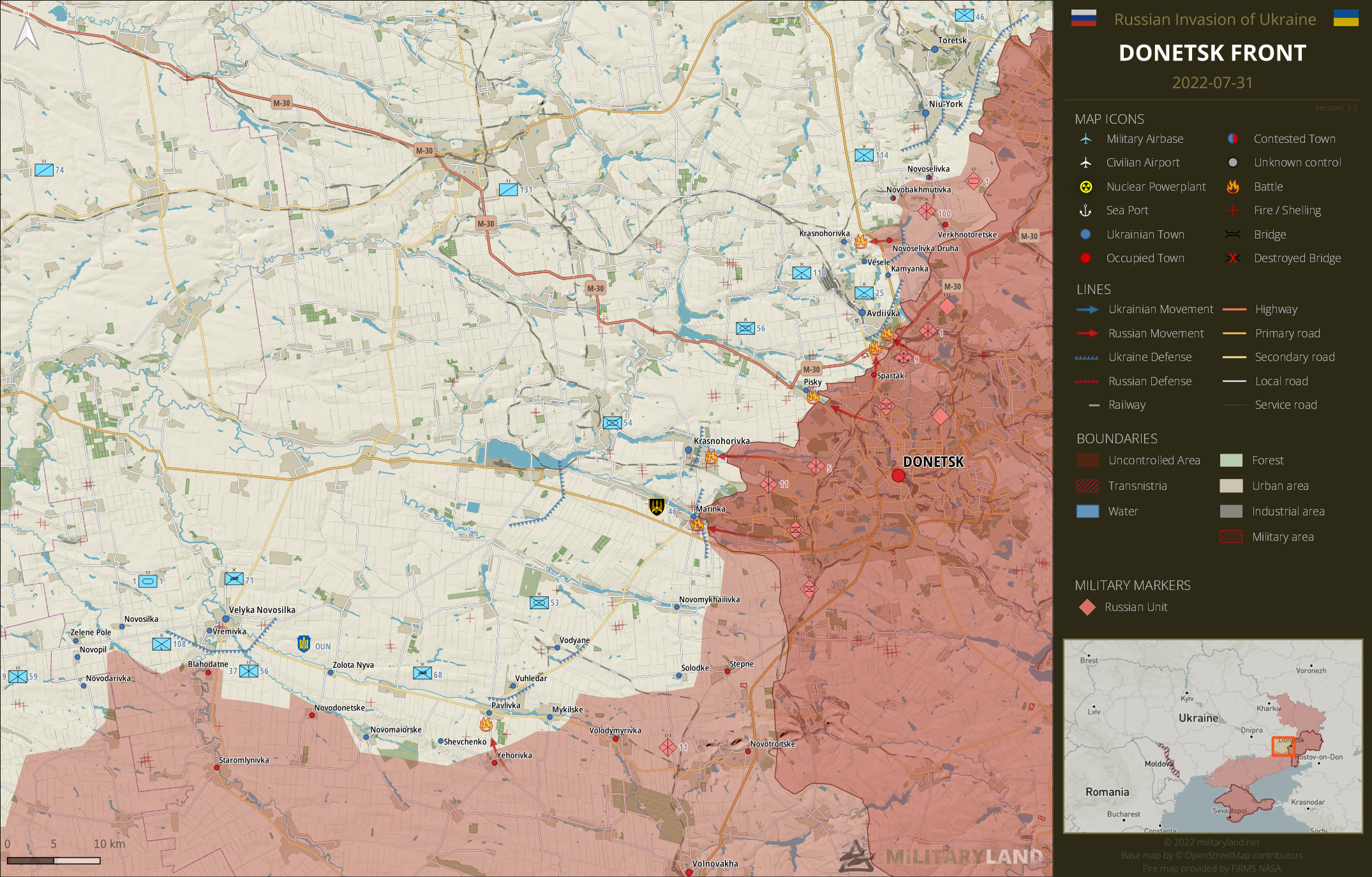 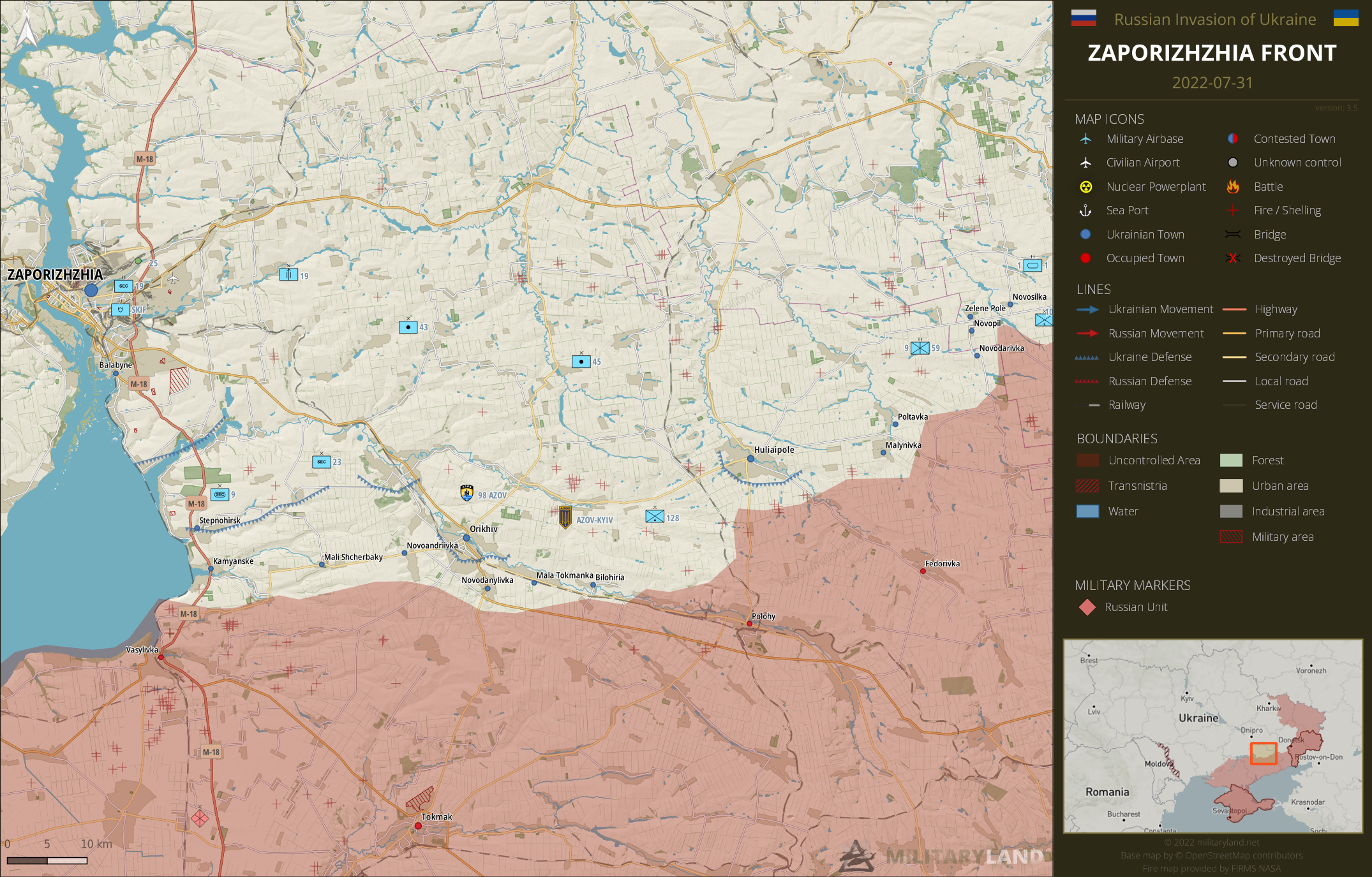 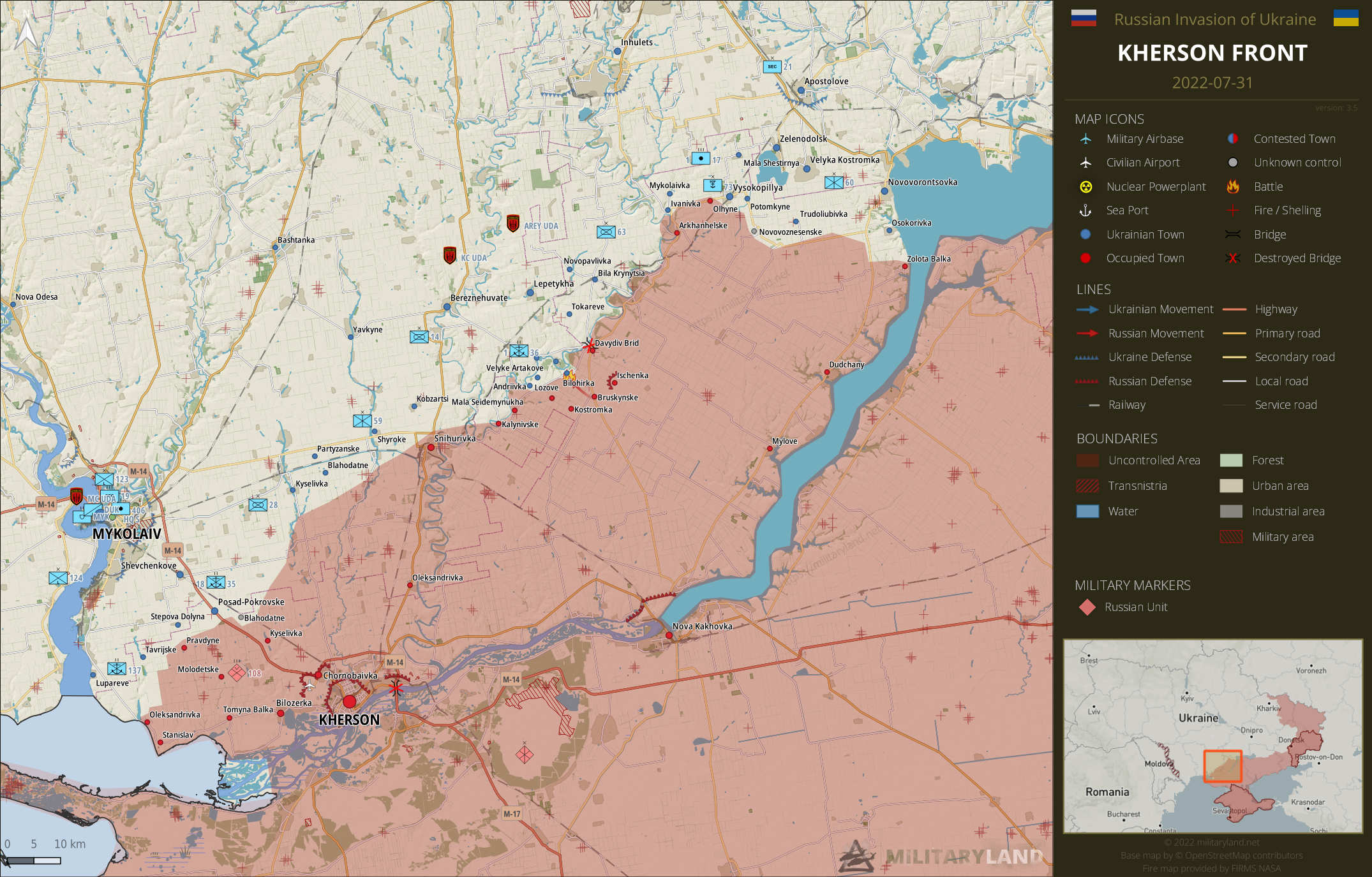 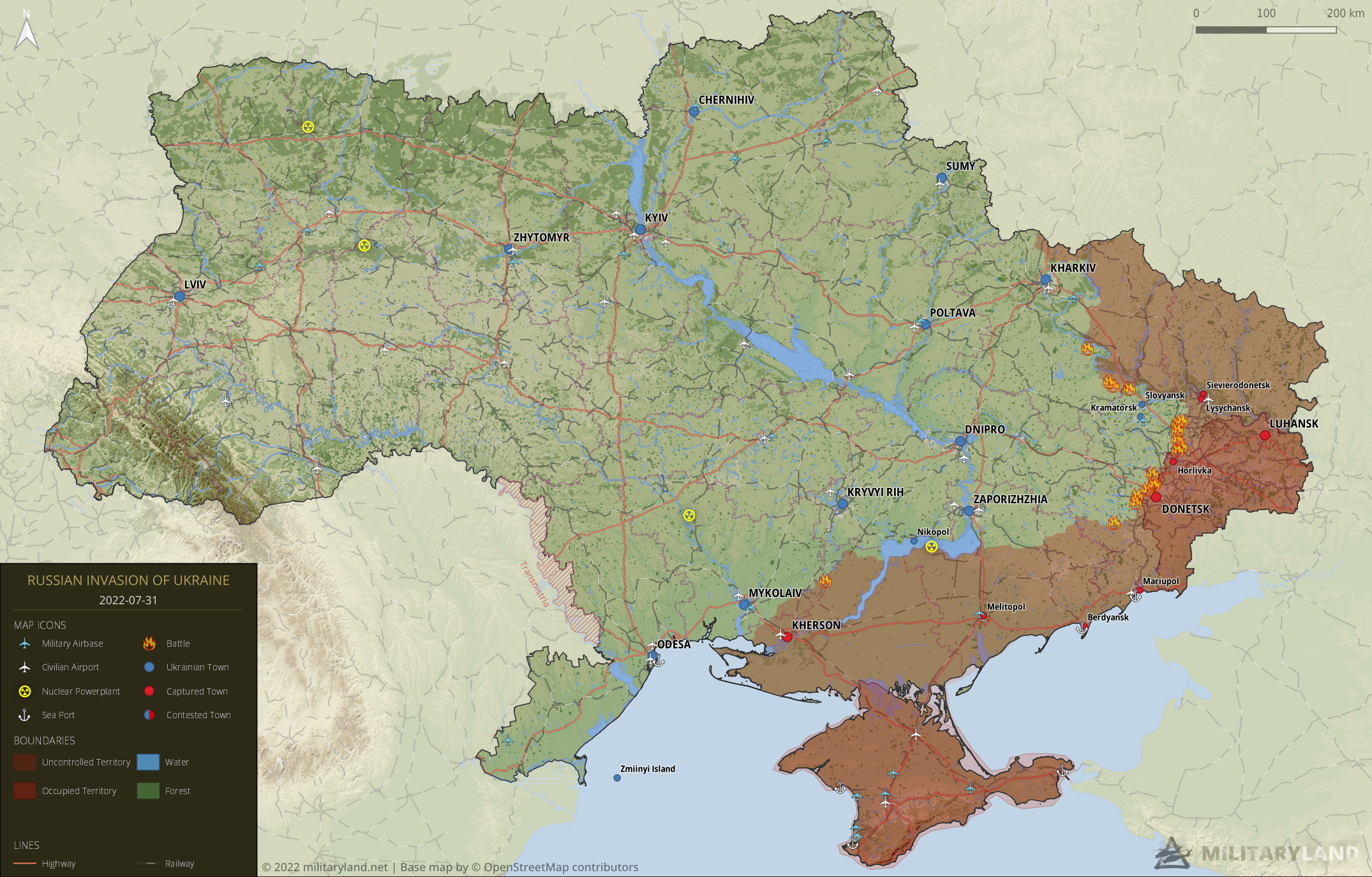 “The enemy is slowly, but surely advancing towards Bakhmut”

I’m surprised to see this kind of language repeated here. There’s nothing at all “sure” about Russia’s advance. People have been describing Russia’s unstoppable advance for months but they’re barely going anywhere as their army dies.

Lt. Gen. Ben Hodges, the former commanding general of the US Army in Europe, guessed that the russian offensiv would end in august. He did that a long time ago (April?). I have a feeling he may be right. If you slide July since the end of the lysyschanks pocket, you hardly see the diffrence.

Russia has stopped everywhere except the Izium – Bakhmut pocket. Stil advancing as a whole more than Ukraine. And just because they are stalled somewhere now, doesn’t mean they are stopped for good. Remember how Popasna had them stalled for months, but when they got through they just steamrolled…

I am very intrigued by the situation in Pisky. For the first time in 8 years, RU army seems to have made small inroads. The Adviivka front is also showing cracks. These two + Marinka are Ukraine’s strongest citadels.

If russia really send 30 btg in the south, they abandon the offensive in the east.

Russia getting that mine could be really bad for Avdiivka. Maybe they just need to get on that railroad and they’ll fly through to Dnipro…

Russia being bailed out by silly strategy by NATO.
They should not hold weak lines but rather draw the Russians as far forward as they can as quickly as they can to extend the supply lines and repeat Russia’s errors from early in the war. Fall back immediately to Kramatorsk line, then counterpunch.

I am sure that both General Staff and local commanders will take your input into consideration.

So that they have to go through the cancer of taking it all back whilst Russian artillery makes it a bloody mess..
they do not have the capability to effectively make such a big counteroffensive in a region where Russia holds superior firepower…

But russia doesnt mobilise the troup to cover all the frontline with this artillery superiority .

I am hearing reports regarding Inzhenerne, immediately West of Polohy, that suggests it is contested. Not worth changing on the map until more corroborating evidence arrives, however it is interesting in terms of Polohy and the Zaporizhzhia front.

In the area of settlement Inzhenerne… which almost corresponds with our maps.

Owing to your info I searched through many sources but did not suceeded yet. Today ISW stated: “The GUR specified that (…) around Chernihivka (…) (RU) personnel are relocating and mining the roads.” Interesting ongoings in that region!? Contact to a local, however, yielded nothing concrete

Yes, I haven’t seen sufficient information to qualify as a map changer, however enough to keep an eye on the area.

Wasn’t Olhyne in Kherson taken back?

Ukrainian side only reported shelling in the area of Olhyne, if I recall correctly. Many interpreted it as liberated and somehow missed the “in the area of”.

An offical from southern Ukraine called it liberated. I read that on ukrinform. It was some days ago though and it may not be a “good” source anyways.

Wich official ? Local official from kherson area ? I already heard bullshit from them .

If its the mayor of Olhyne, ok. He talk about what he know.

Nb : i think the front is 5km south to olhyne, but i cant be sure of that.

Head of the Kherson OVA Dmitry Butriy was on the air of the telethon UAразом.
“I’ll tell you that as of today, 53 settlements have been officially confirmed and liberated…”
+7 liberated (was 46)
Looks like he talking about Ternovi Podi, Maksymivka, Vavylove, Tsentralne, Shmidtove

I’m looking at that right now… he also reportedly said some crazy things like “According to residents of various districts across the region, the occupiers are very scared.
“They go to the houses of locals and change into civilian clothes to escape from the battlefield.”

The reason i follow is because when you Russia made gains, it did. You should be less pro west in your comments though. What about Hrygorivka? According to Рыбарь and South front, it is under russian control

Last edited 6 months ago by Vritron
0
0

you cannot count like that, not only because ‘not all BTGs are born equal’ (they have got different templates) but also ’cause it is hard to say how well manned they are (with which there is a problem from the start).

your comment does not make sense anymore, because he edited his comment.
could you please explain what your answer was referring to.

Sorry, but of this even answer me?

cannot edit the comment. (cookie expired probably)
I referred to the original @Vitrion comment about amount of the ‘BTG’ present in Kherson and their strenght in personnel.

TBH i think, even tho this is more leaned towards ukraine, that he does a good job of holding it as neutral as he can/wants.
If you compare it to other sources like DPA or DeepStateMap who have a clear ”Favorite”, i mean that doesn’t mean they are bad just makes it less reliable.

Personally I don’t care who the site admin. is supporting. I am here because Jerôme is doing a fantastic job of ensuring the maps reflect the actual situation on the ground. People can have their preferences but maps should never be “biased”.

Correct, I’m trying to keep the maps unbiased as much as I can and verify every information that appears.

DPA, like the Duran, NAtlas or other yt redpillers are functioning as proxy for Russian propaganda. That even not counting the newer ones. They are (willingly or not, some may be just genuinely stupid) part of the fighting force on the informational battlefield.

russian side commonly claims control of village by getting scout element to the village sign… so they are hardly reliable in their claims… they claimed Siversk being captured 2 weeks ago… pushing on Ryznikivka.. and we all know they were nowhere near it…

I’ve been following the conflict since 2013 and as the war continues and evolves, it subsequently shows you which sources are credible. The list changes over time, of course.
So far, Rybar and South front are not on the list.