Ukrainian forces continue to successfully repel Russian attacks on their positions, allowing the enemy to achieve only minor gains at high cost. Russian forces currently focus on the area around Bakhmut and attempt to break through Ukrainian lines near Donetsk, where the frontline hasn’t changed since the start of Russian invasion.

Meanwhile, merchant ships stationed at Odesa and Chornomorsk are loaded and ready to export the grain. The Ukrainian side is currently waiting for a green light from UN and Turkey.

Ukrainian officials stated there is a high possibly of Russo-Belarusian invasion from the north towards Chernihiv Oblast. We’ll see in coming days and weeks if Russia has capabilities and resources to open a new front. 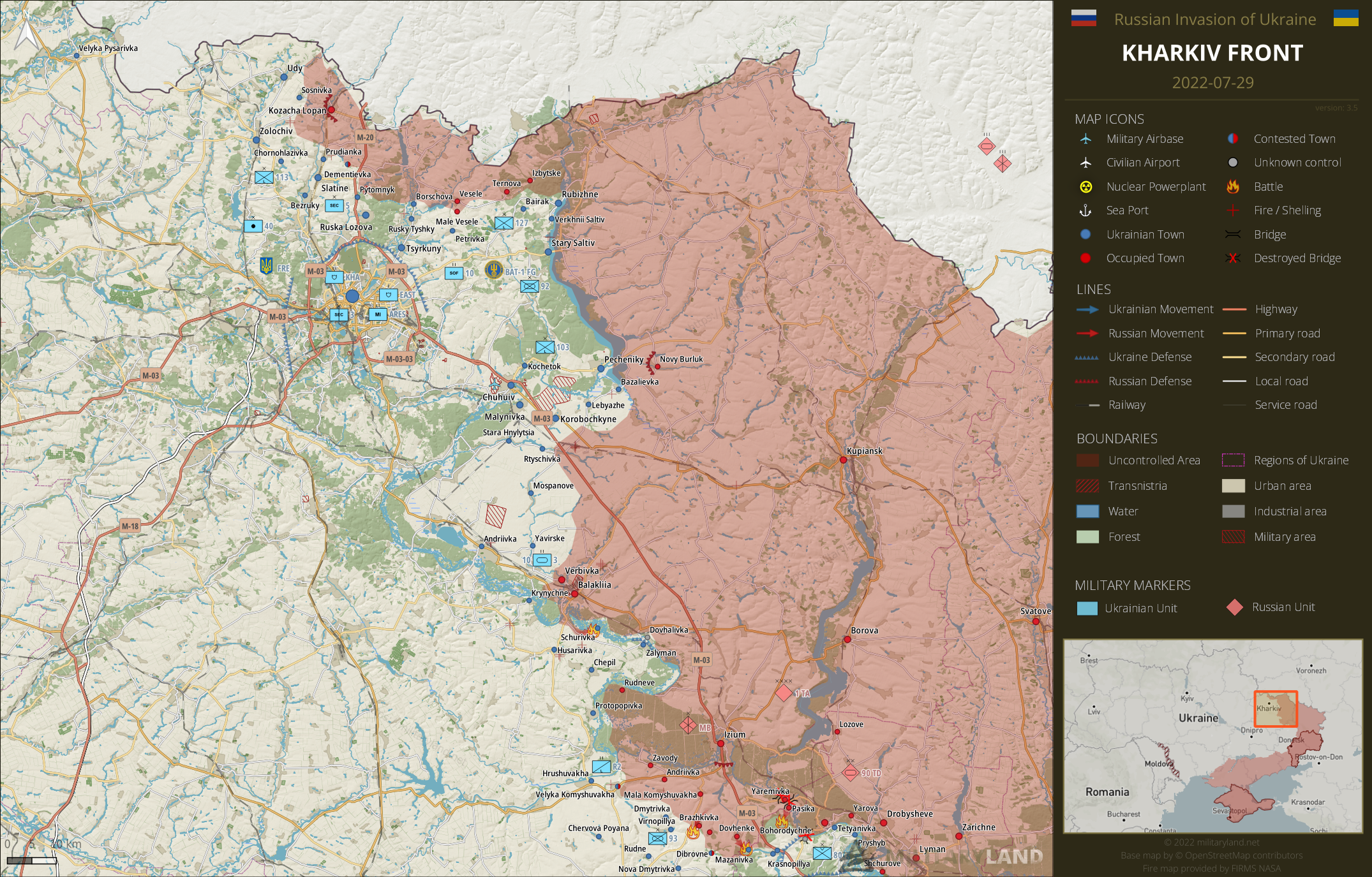 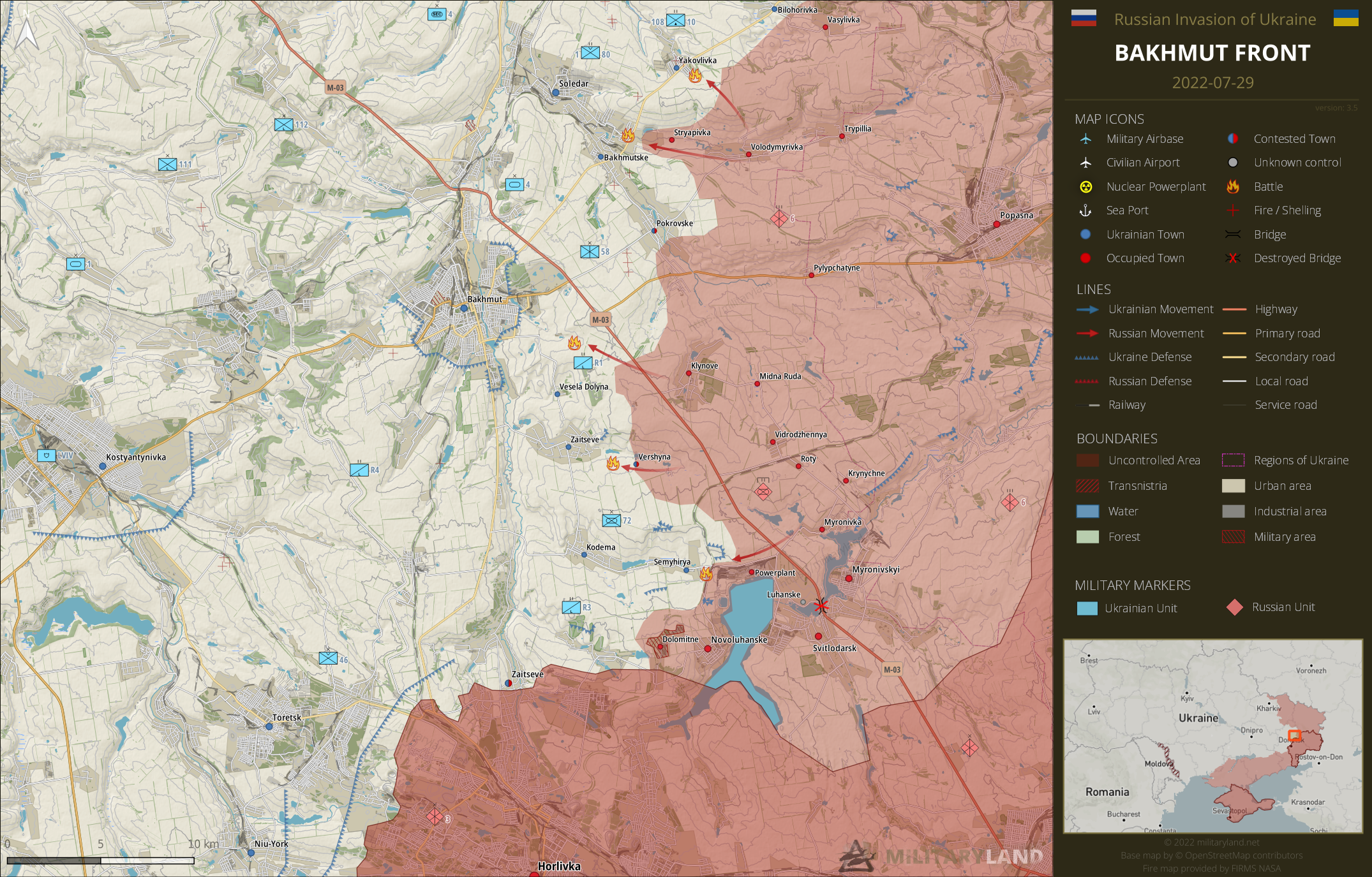 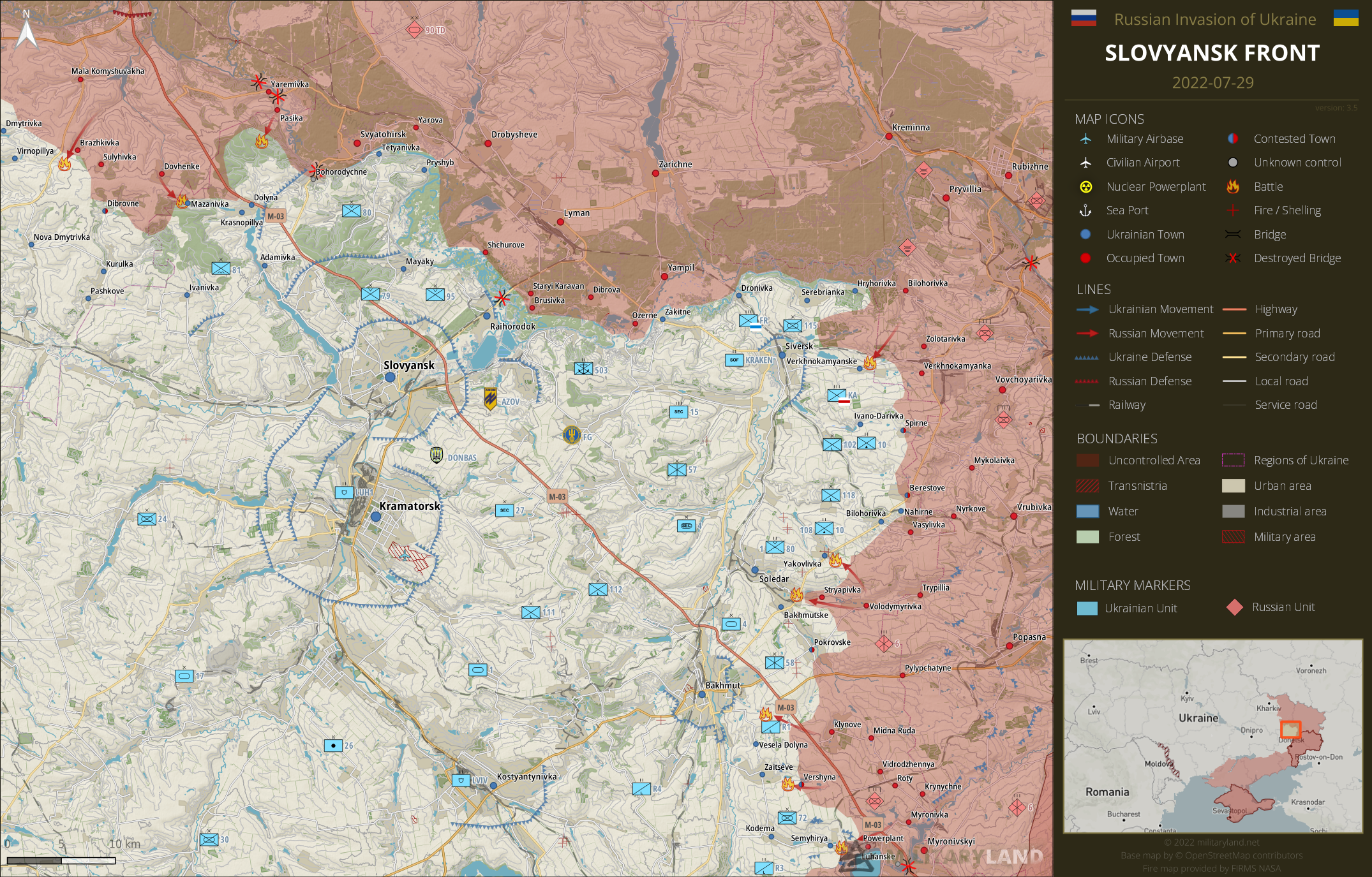 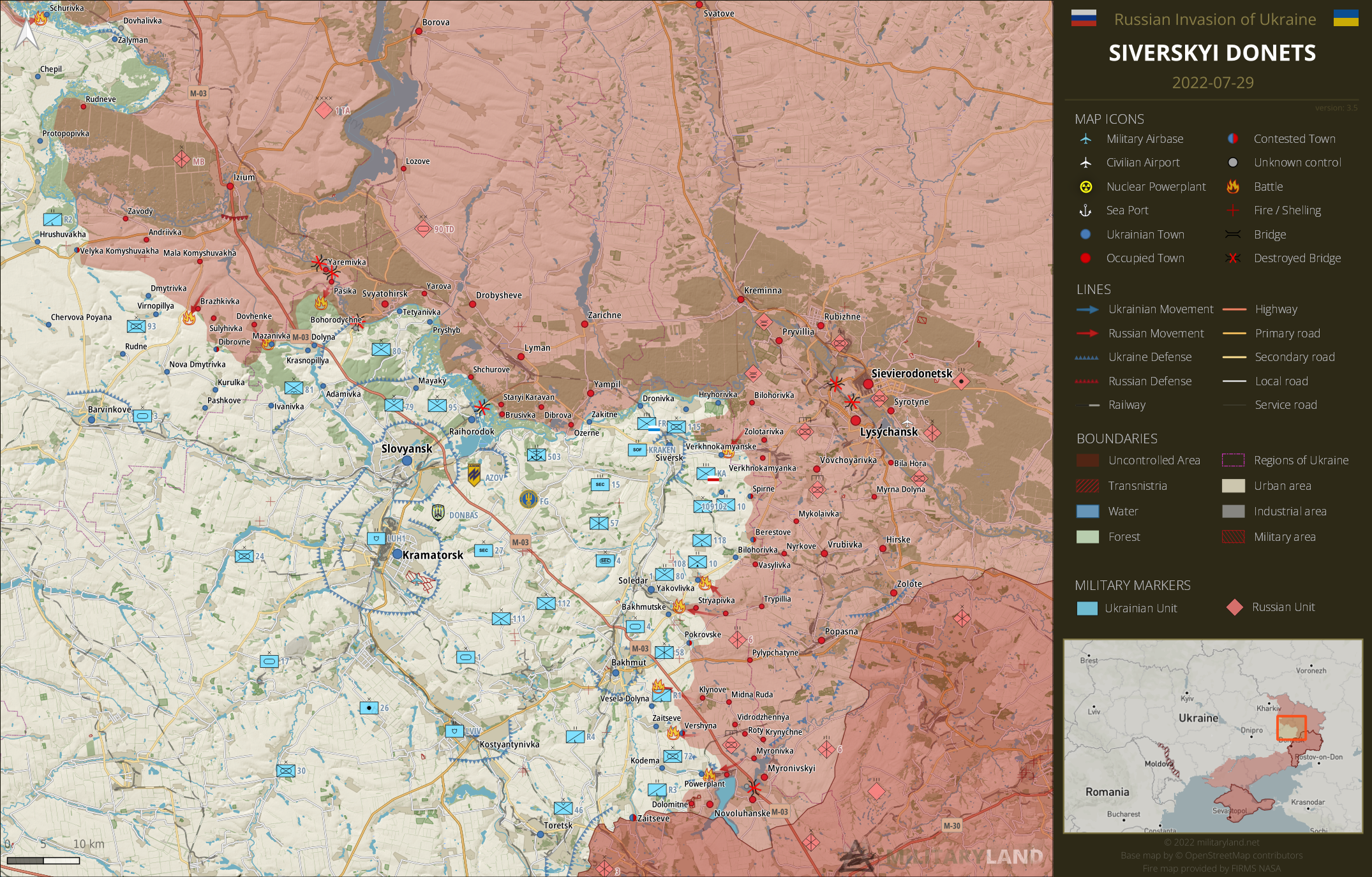 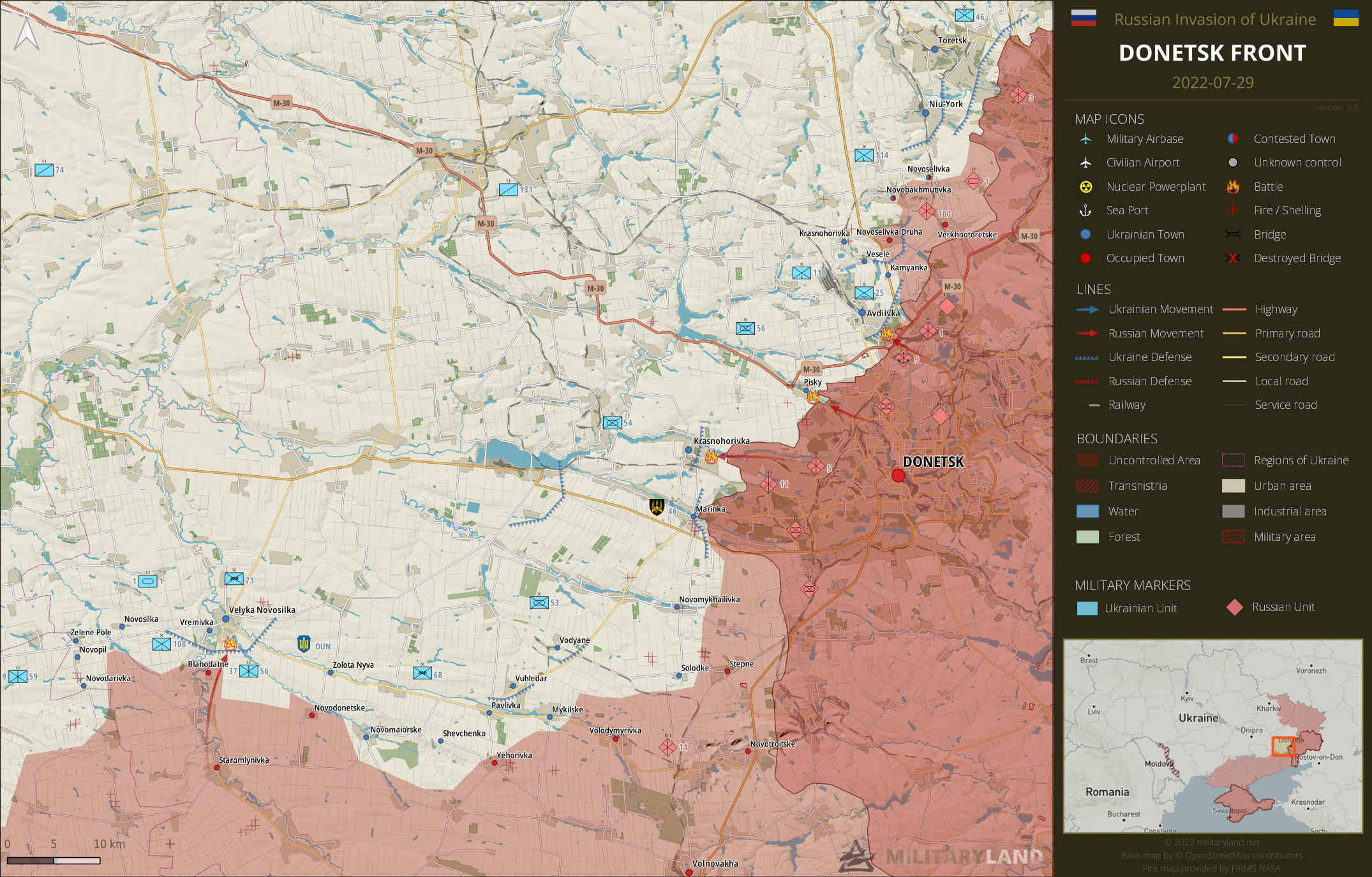 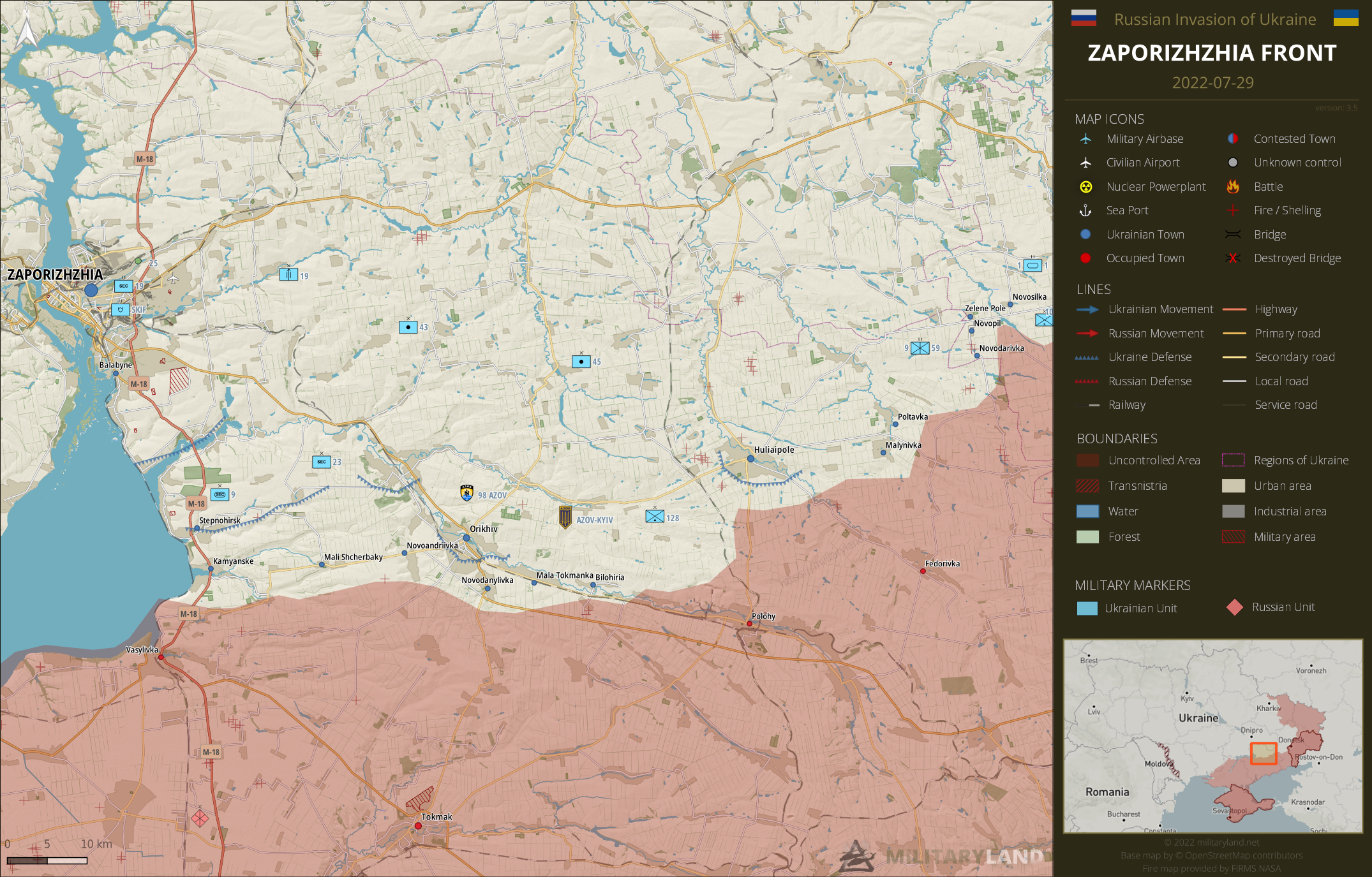 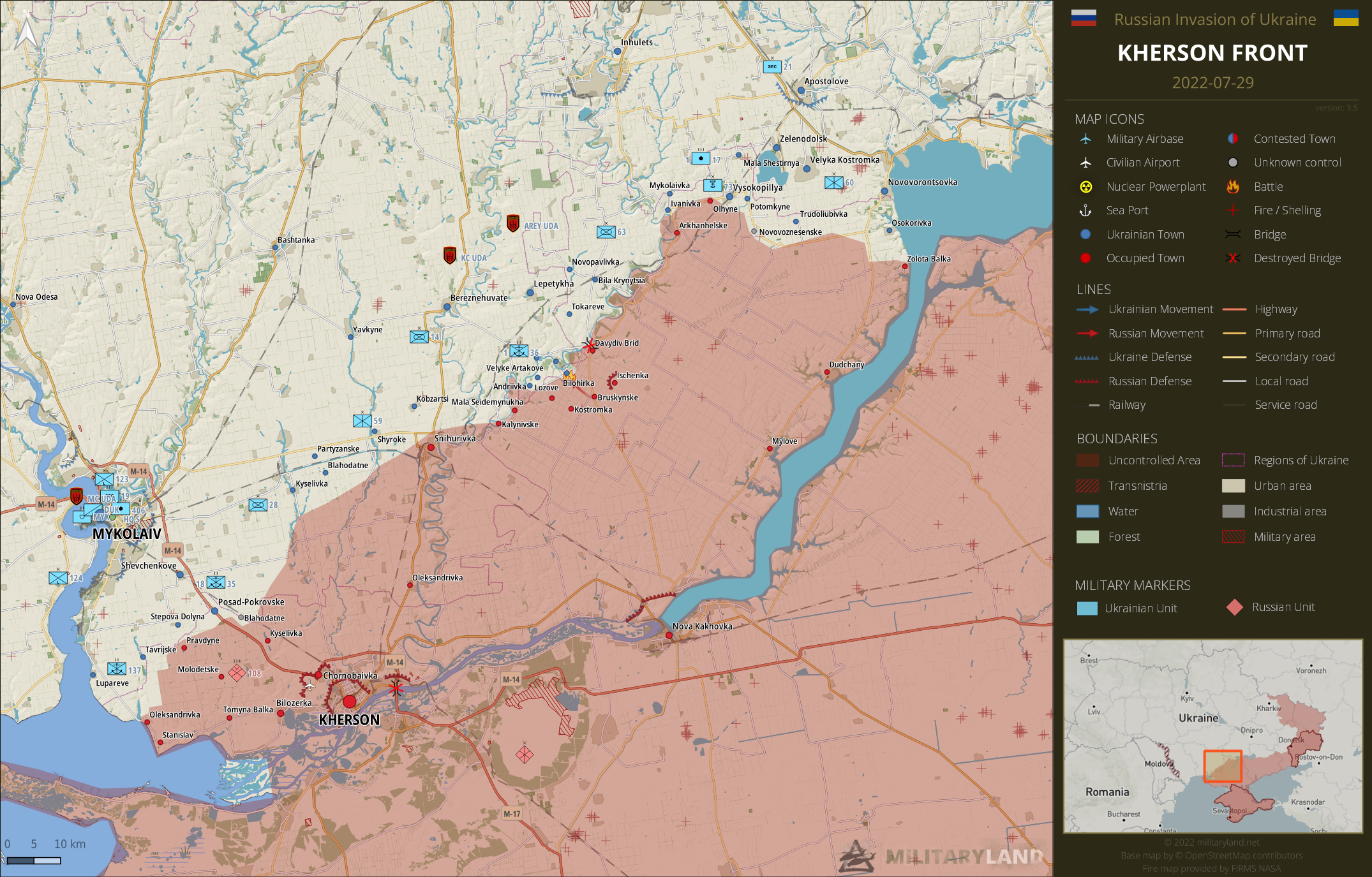 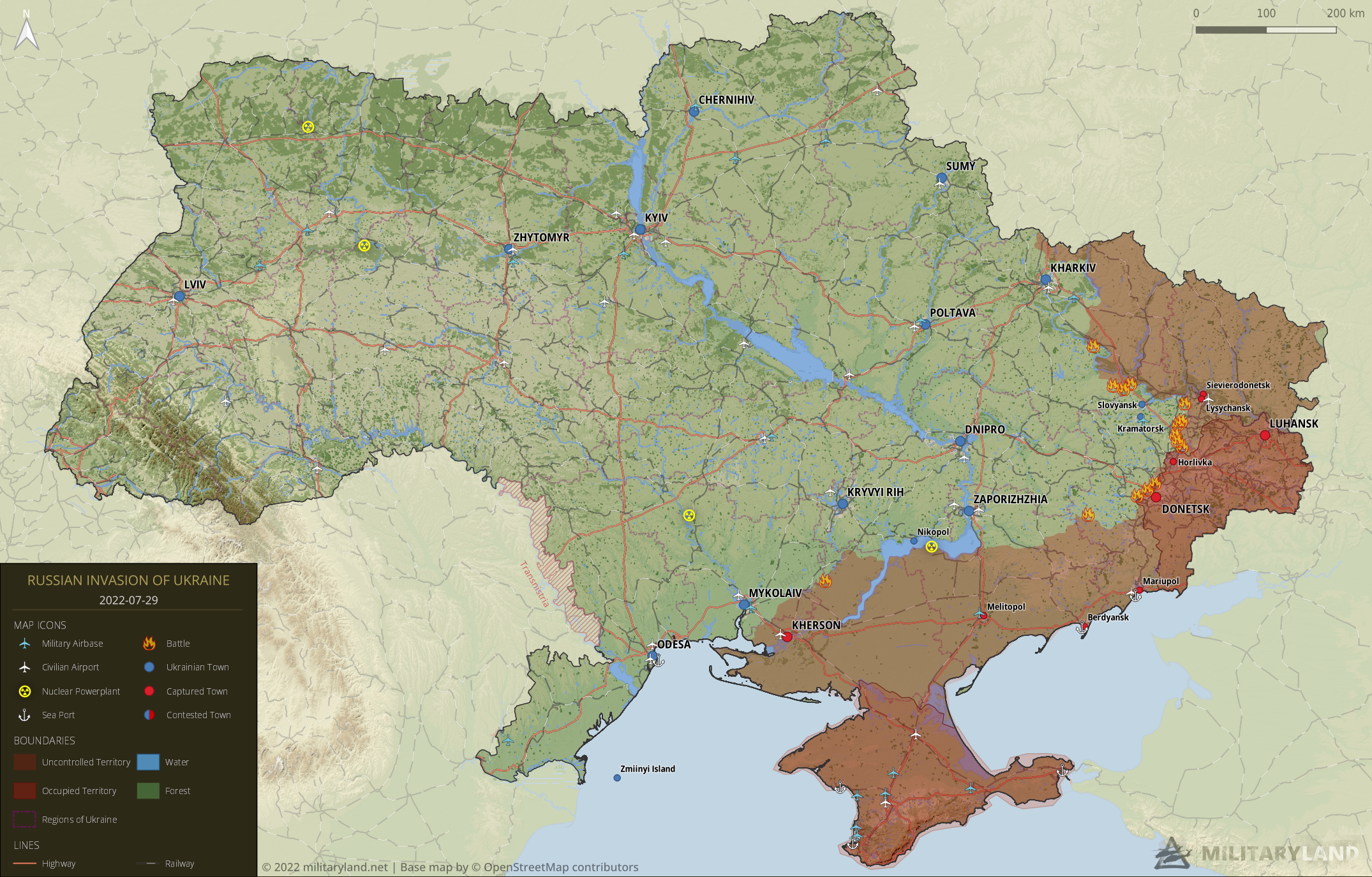 The drone attack on Sevastopol means one of three things:

3 is most likely. Either way, Russkies should worry.

UKr did not acknowledge the attack – for now it’s just yet another Russian tale. A lot of them are flying lately.

Last edited 6 months ago by Noelle
0
0

Most likely one of the “volunteers” in Sevastopol itself. I personally don’t believe in the version of arrival from Ukraine – too far and too complicated.

Sorry, but this is nonsense. The attack was made from Sevastopol. Here is the link https://www.rbc.ru/politics/31/07/2022/62e645ea9a79475cc14d962f?from=from_main_9. But even so it’s clear that the drone is homemade and primitive. There is another question here: did the Russians themselves do this?

Last edited 6 months ago by Vladimir
0
0

Pokrovskoe is 30.07 under russian control, so @riafan_everywhere (videos) and militrymaps. It looks true because of “normal” newssourse and fighting on the outskirts of Soledar.
The offensive near Donetsk is even developing, which I personally didn’t expect – I thought it would die out right away.

Yes, I mean in the map is under VSU-control.

According to pro-RU telegram channel Министерство ВСРФ, Semigorye (Semyhirja; Svitlodarsk region) now under RU-control. According to the report, allegedly also confirmed by Ukrainian armed forces. However, I was unable to verify this.

In this report Ukr say the city is contested.

And nothing in today report.

Yes, I should have better added confirmation for ‘eastern parts’. Away from that I also wondered why not mentioned in todays report. Murky situation, as so often.

Arestovich has just said there would be no Kherson counter-offensive. Too risky and bloody.

Looks like russia is giving up on major attacks on the izium axis for now and instead tries it east to west in the donbas. Could make sense from a supply perspective.

Supply line to Izjum is a good keyword. T. Cooper stated on 24th Jul: “the Russians were left free to repair the crucially important railway bridge in southern Kupyansk, knocked out nearly a month ago”. I am unable to verify both of it, neither the bridge’s destruction nor its repair. Could anybody?

The source I referred to:

RIP soldiers of mariupol. You were heroes. You will be remembered, not only in ukraine.

Last edited 6 months ago by Vladimir
0
0

For those who may not catch up with the brutal sense in this pun: ‘Sala’ is a bacon for which the UKR is known. On 2.5.2014, during the bloody riots in Odessa with many fatalities, 42 pro-Russian activists, among others, burned to death in a house. Under unexplained circumstances.

Now you likely catch up with RU desire for cauldrons on the battlefield – to fry bacon. So instead of ‘glory to the heroes’ it becomes ‘bacon made from heroes’. Inhumanity poured in a single phrase.

Naive idealism. Moreover, they finished off their own.

It is highly rational to be idealistic. I would advice popper and kant for starters.

If Kant could be named idealistic, but Popper definitely not. But I am not specialist in these doctrine, it was kapitalistic philosopy and “not allowed” in my high-scool time. But your support for the Azov fascists does not fit into any gates. You yourself did not notice how you became a fascist.

Who are the ruzzian nazis to talk about fascism?
Look in the mirror boyo!

Nobody praises, calls for and undertakes genocide but Ruzzia. Genocide is maximized fascims. Azov is anti-RU as direct response to Ruzzian aggression of 2014. RU opened pandora’s box what they once closed as brothers in arms with Ukrainians. ‘Pidor’, you now roar, I know. Tortured, needy RU soul…

told’ya to not feed the Kremlin’s Hamster. If Kant then probably ‘Project of Ethernal Peace’ (which is kinda EU memorandum). For better understanding the RU ‘soul’ ‘Brothers’ Karamazov’ would be good. And for current events somewhat ‘Boris Godunov’, too.

Not according to this:
https://www.facebook.com/GeneralStaff.ua/posts/pfbid02M7nhnMw7ZvW2yd4heXDpdjB7xXvMVsLVgQM337d5GHY8CxVK4XCpKoWWy8usLfFwl

You mentioned in previous report “Russian troops partly withdrew from Berestove at night. The village is now contested.” and “Russian forces advanced closer to Siversk, threatening to cut Ukrainian troops at Serebrianka and Hryhorivka.”

I wonder where did you get that information?

Siversk – there was a report of RU advance closer to Siversk
Berestove – UA reported that RU captured the settlement, later reported fighting in the vicinity and even that they repelled RU assault in the settlement

Last edited 6 months ago by Jerome
0
0

“Siversk – there was a report of RU advance closer to Siversk”

Can you give me the link?

Are you sure that all these are assaults? How many troops are involved each time? They could just be reconnaissances to test the defenses. They way you put it, it looks like 1000 men die each day, but non Ukraine, with all that proganda says that

UA General Staff differs recon probe and assaults, I do the same. It’s impossible to tell how many troops are involved. RU sources say that regiment/brigade size attacked Avdiivka/Pisky/Krasnohorivka.

And how can they tell that apart? Which criteria do they use? Are u sure this isn’t just propaganda? The numbers just don’t fit with their declarations that’s all

For avdiivka, separatist source confirm its offensive. But clearly without sufficient power.

No major offensive actually. We are probably under 500 kia per days both side include.

Like most analysts, I suspect Jerome monitors different sources over time and then compares their statements to the verified situation on the ground at later dates. Over a period of time he will learn which sources have greater veracity. Correlation with similar valued sources increases confidence

there is a lot of claims from the usual suspects. The assault ranges from Kaminka to Pisky with some actions around Krasnohorivka.

Seems like Russia started their offensive in the Donetsk area, we’ll probably see some advances their for maybe 1-2 weeks.

Will be interesting to see which offensive is more successful. Could mean a major win for either side

Nothing change since months. Attacks on this part of the front are permanent.

We still wait to see where russia will sent the troup recompleted after sievierodonestk. Small bads roads east to siversk cant support a major offensive with BM21 firing in mass.

Izium advance is dragging badly. The 1st Tank Army is not getting anywhere to west after Ukraine pushed back with the troops they got from Kyiv region. Their only bright spot has been the Lyman – Yampil axis… now they are getting even more pushback. The Luhansk offensive is going much better.

don’t know what you mean by yampil axis, maybe siversk, because i didn’t see any advances or pushbacks anywhere else. but the siversk axis is from my understanding very contested, with RU slowly pushing, Bohorodychne might turn out very bad (encirclement) or very good for UKR or just nothing happens

Yampil axis. One month ago, May be 2.