Russian forces are unable to gain a momentum as Ukrainian troops continue to successfully intercept and repel attacks on all fronts.

The damage caused to Antonovskiy Bridge by Ukrainian strike limits resupply of Russian units in Kherson, putting the enemy troops under the pressure. Furthermore, Ukrainian artillery was able to strike Russian depot in occupied Skadovsk in Kherson Oblast. 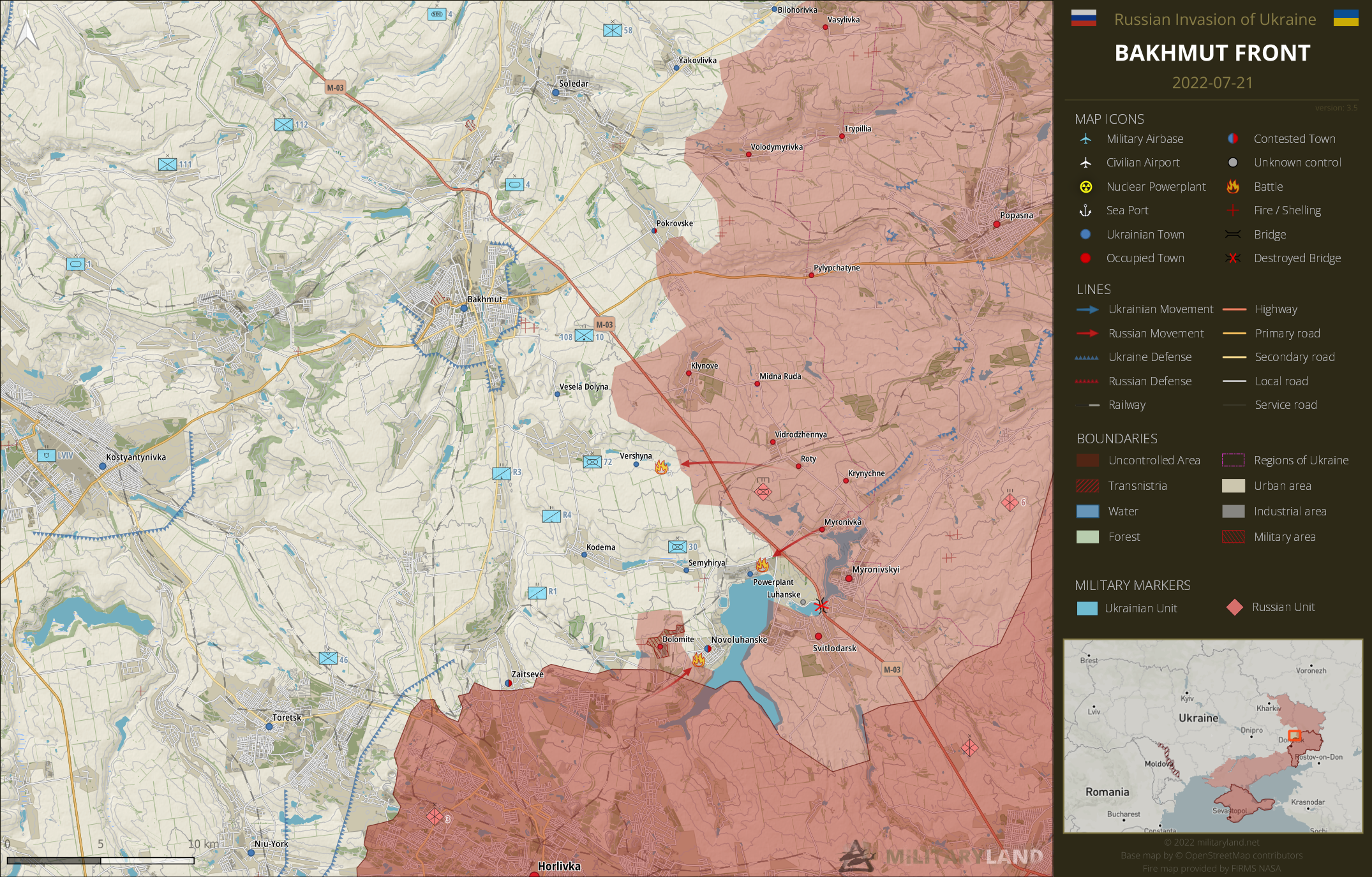 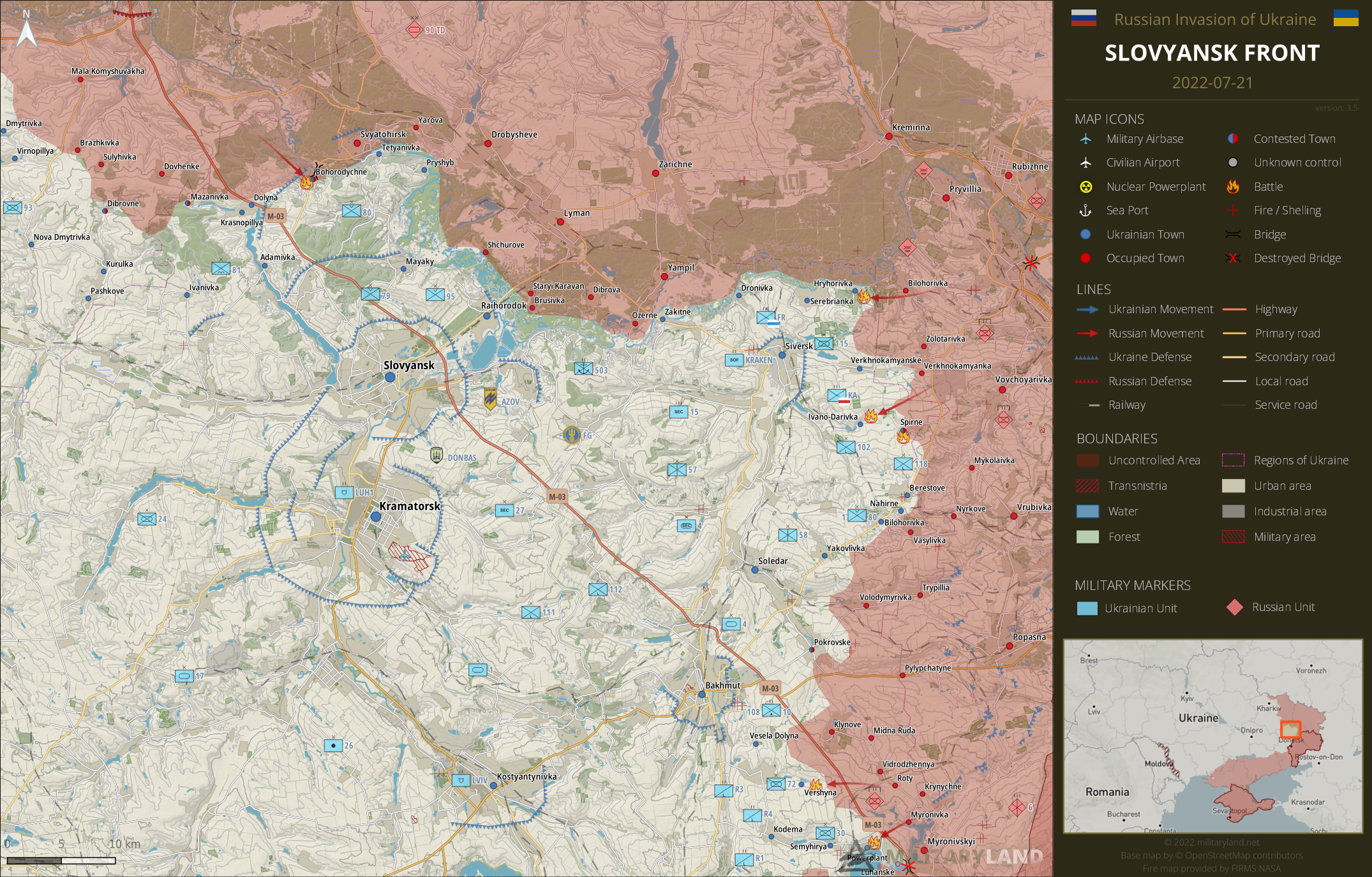 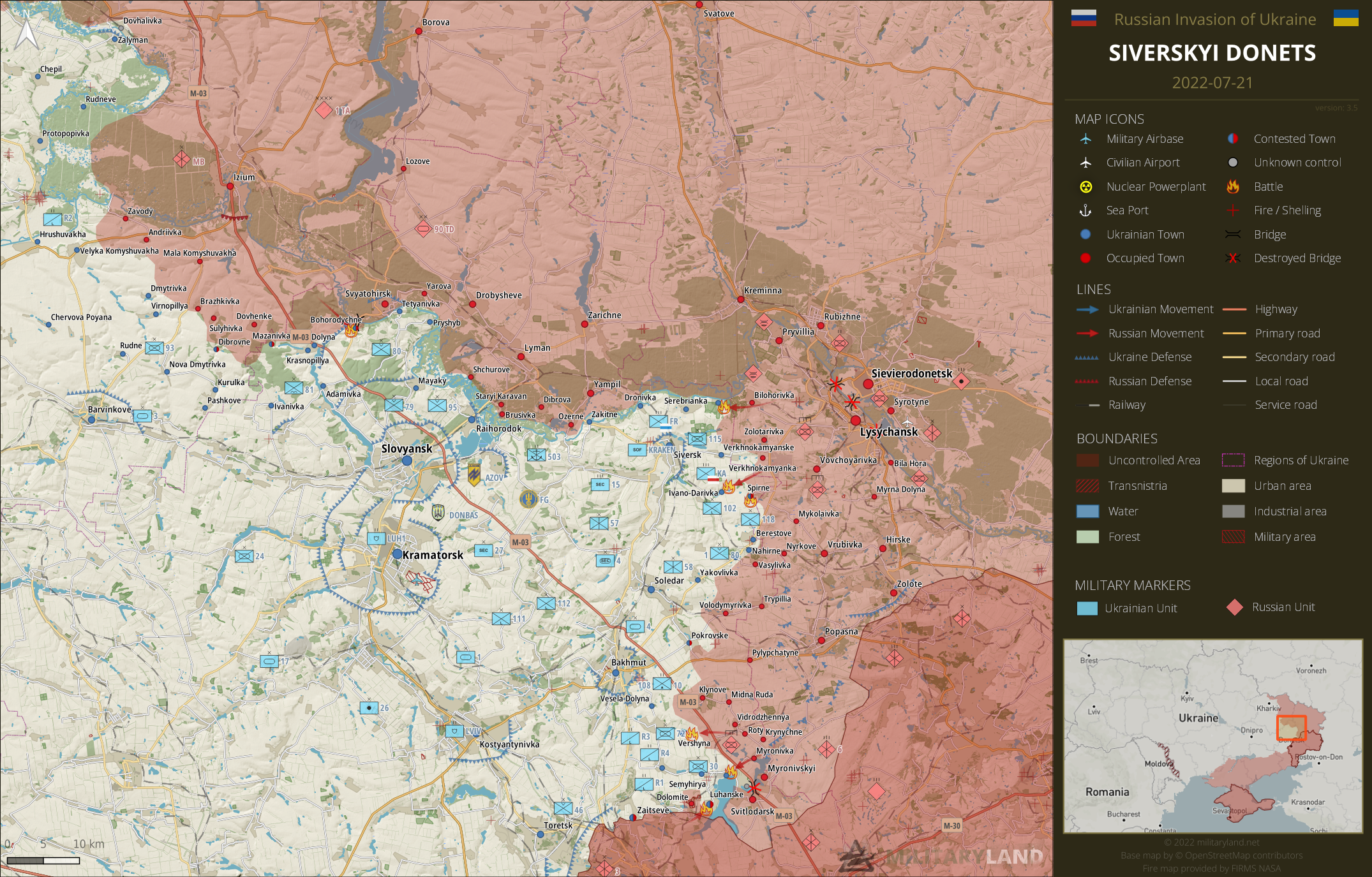 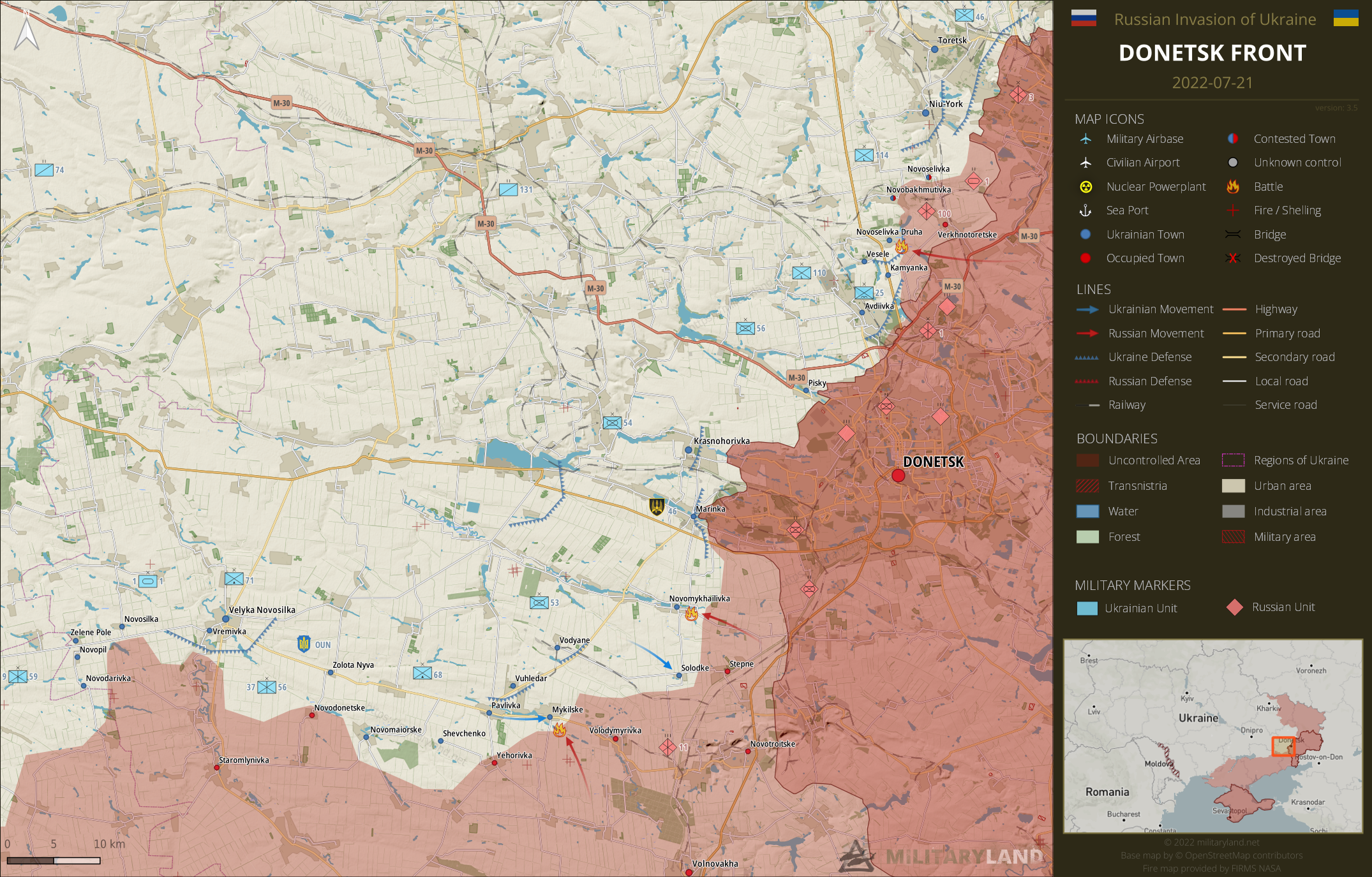 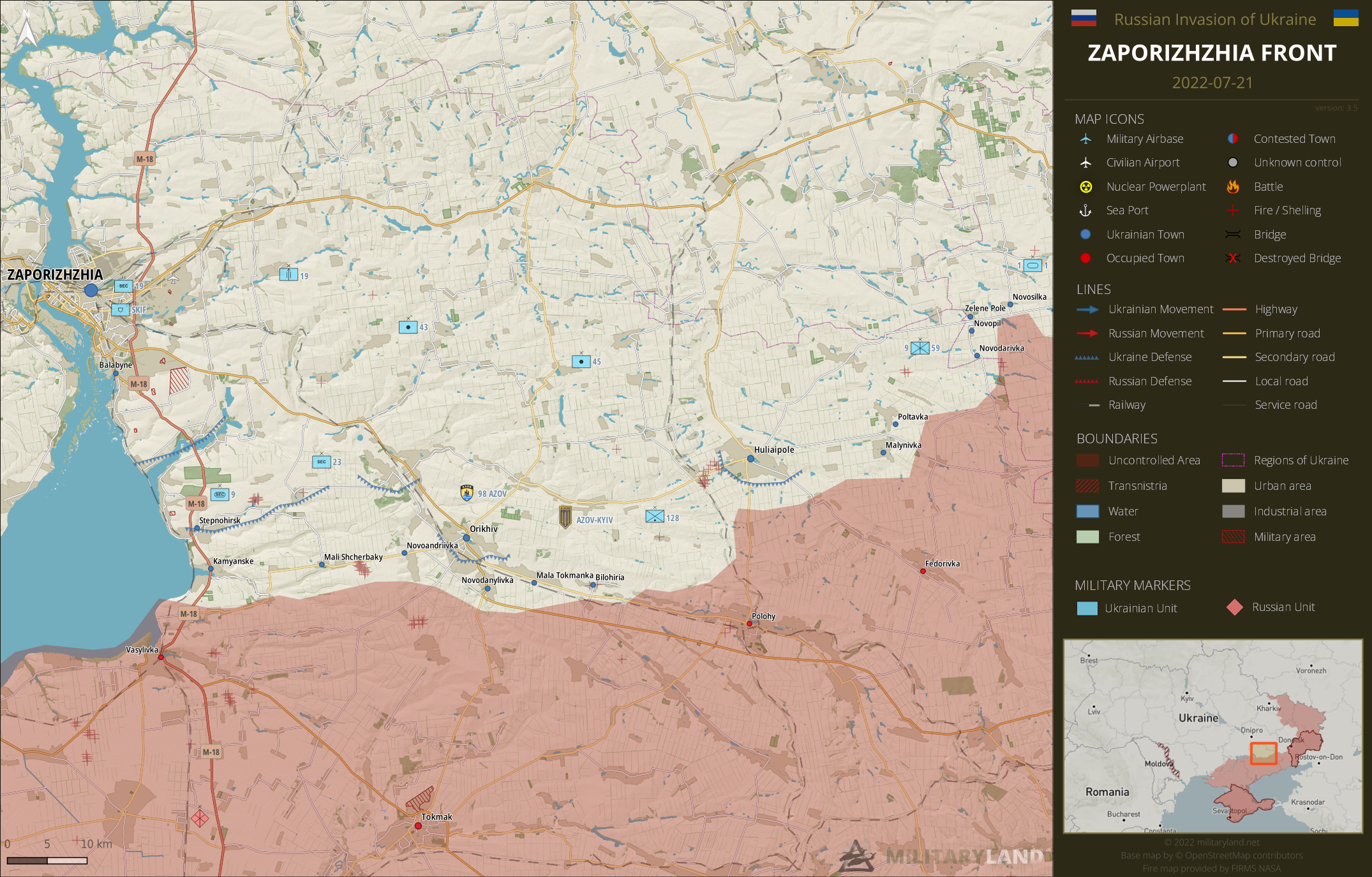 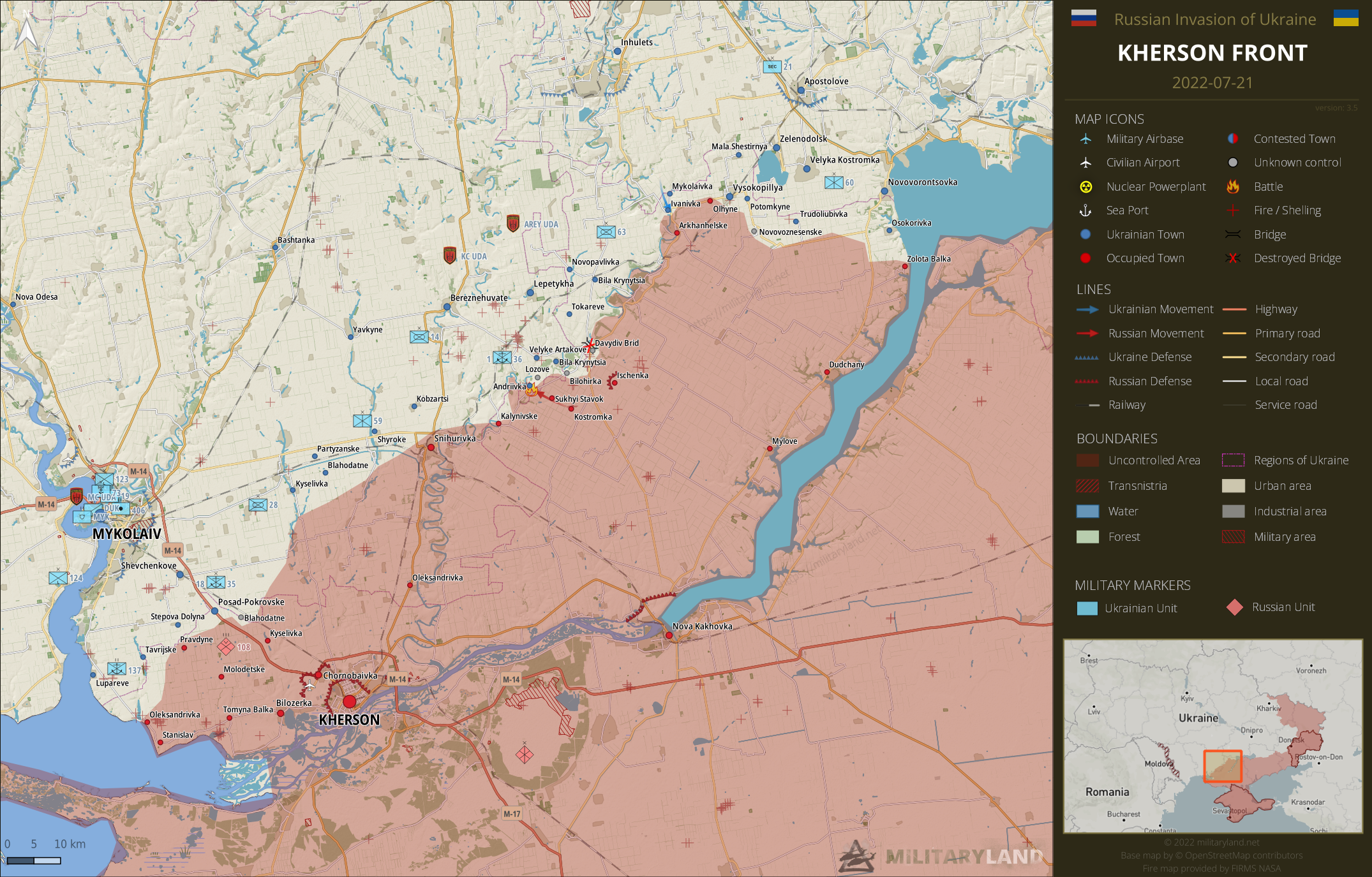 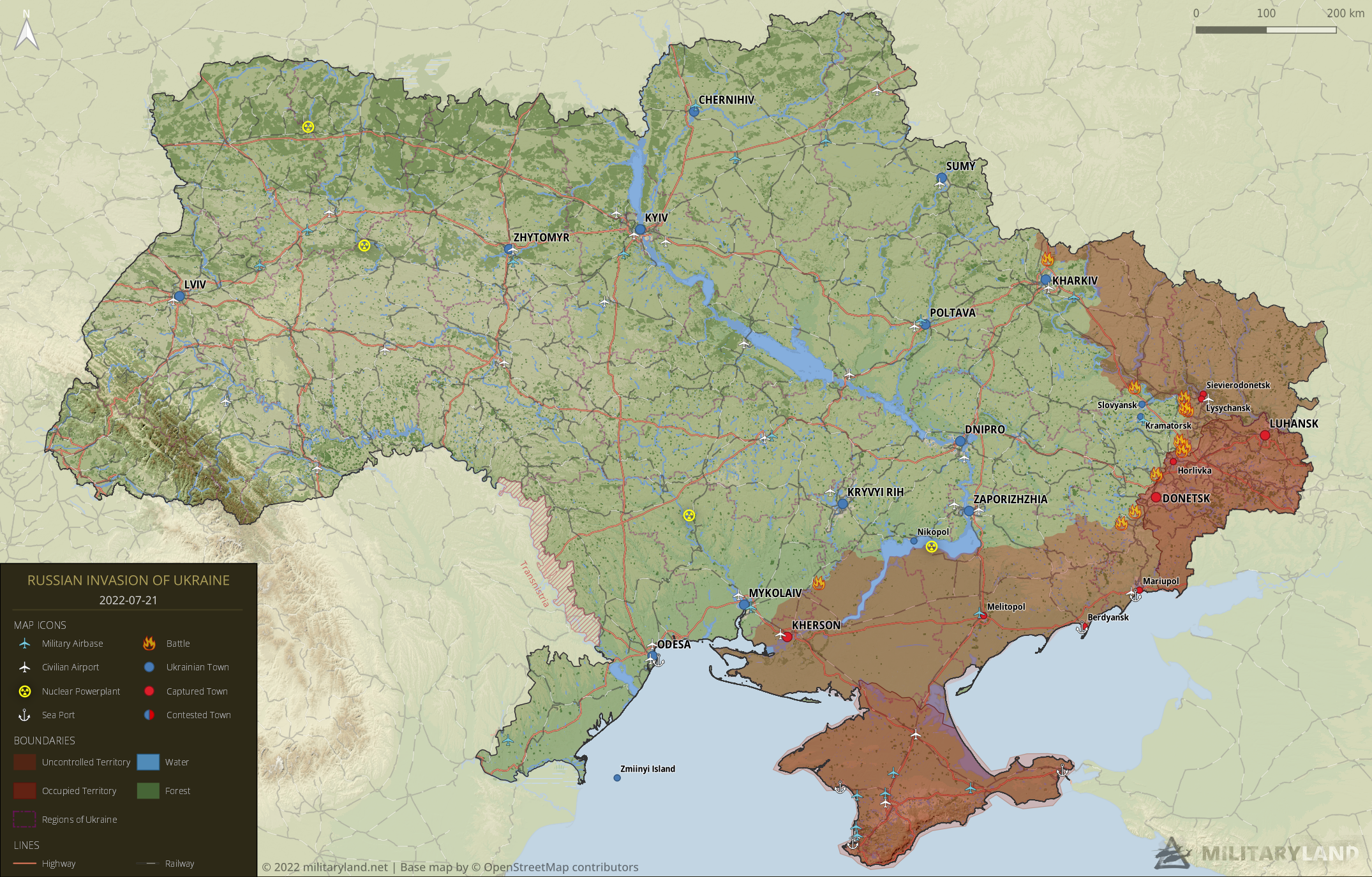 Is Ukraine resting some veteran units right now with fresh battalions taking their place on the line? I’ve expected that to be the precursor to any major offensive. Experience for the new units, rest and refit for the vets and then hit with everything once the veterans are ready to go back in.

Sounds reasonable. Not invoking martial law and starting general mobilization after the kiew Desaster just may be russias biggest mistake there after. Apart from starting this shit in general of course. Russian forces even just may fall apart. Winter is coming for russia.

Russia cannot announce mobilization because it will cause destabilization within the country. The announcement of mobilization means that war has been declared. Only 33% of Russians support the war, but even they are not ready to participate in hostilities.

The question is, doens t loosing this war destabilize russia as well?

I believed Putin had lost already by the end of March because he was already out of any winning options.

Sadly, UA crippled its best offensive units by sending them to defend Donbas. I don’t blame them (they didn’t have any other spare units), but it’ll take time to replenish these.

Clock is really ticking down on this Russian offensive. I mean, they’re still on the offensive, right? Kind of hard to tell. Seems like they’re throwing everything they have all the time to try to keep the initiative but that’s about it.

Culmination incoming. I am looking forward to their explanations…

“Gesture of goodwill”. With maybe some candy from the West.
BTW: Does anyone have an idea about when those four Siemens gas power plants that made it to Crimea in 2015/16 in spite of the embargo will be due for maintenance?

Here’s another hint that Vysokopillia is under russian control
https://theins.ru/news/253432

Last edited 6 months ago by Денис
0
0

Bilohirka was defended from attacks from davydiv brid. I guess it is safe to assume that lozove is also controlled by ukraine. There was also a mentioning of the latest concerning shelling in the area.

Yes, Lozove is most likely under UA control.

Rumors claim Ukraine encircled 2000 Russians in Visokopyllia, if this is true that’s about 1/10th of the Russian troops in Kherson right there.

Heh, and I has been saying that Vysokopolye is under the control of Russia.

Plz do not spread rumors concerning the south. Ty

even if there is an encirclement there would be no way the ukrainians could hold a 2000 man encirclement with russian forces trying to save them. also from the maps i’ve seen it seems like they could easily just go to a more favourable position without much casualties

Arestovych is talking about 1k, not 2.5k RU troops in Visokopyllia. Poorly supplied for several weeks, after destruction of command posts. Some trails may be open. Main roads are blocked by UA.

But that this whole thing is still a rumor and not confirmed, doesn’t make it believeable at all, also that this rumor started or got attention by twitter, makes it even more unreliable. TBH this whole war is a mess in terms of information and without prove i hardy believe anythings really true

What does Ukraine need to counterattack that it currently doesn’t have?

professional soldiers, artillery, aviation, armor and in some cases they even lack weapons or just basic equipment for that matter plus some forms of corruption make it easier for the russians and also the russians have build defensive positions that will make every attack even if won very costly.

They obviously need to weaken the Russian artillery and they dont have enough counter-artillery firepower to do that for now.
Maybe that Ukr officials also give more credit to human life than the Russians do so they want to have the opportunity to counterattack without risking to many casualties.

There are reports that the Artillery barrels are becoming warped from use and they are not accurate anymore. Seems russian artillery could be breaking down and having equipment failures.

I think they will not do a single counterattack (ru can kill them easily with concentrate bm21), but they will put more and more offensive everywhere.

And wait to see where russian will collapse. Russian doesnt have the mass to défend all the front line.

I doubt that the actually ‘counterattack’. They cannot afford to throw the troops into the fray and fighting for Kherson would be bloody and devastating for the city and civilians. I’d expect rather efforts for making life of enemy force so miserable they will just leave (another ‘goodwill gesture’)

A few weeks. Maybe a month.