Russian army reportedly regroups its troops in preparation of the push towards Slovyansk from the north. The enemy also continues to probe Ukrainian defensive lines near Bakhmut and in the southern part of Donetsk Oblast, looking for a weak spot.

The other frontlines remain without a change. 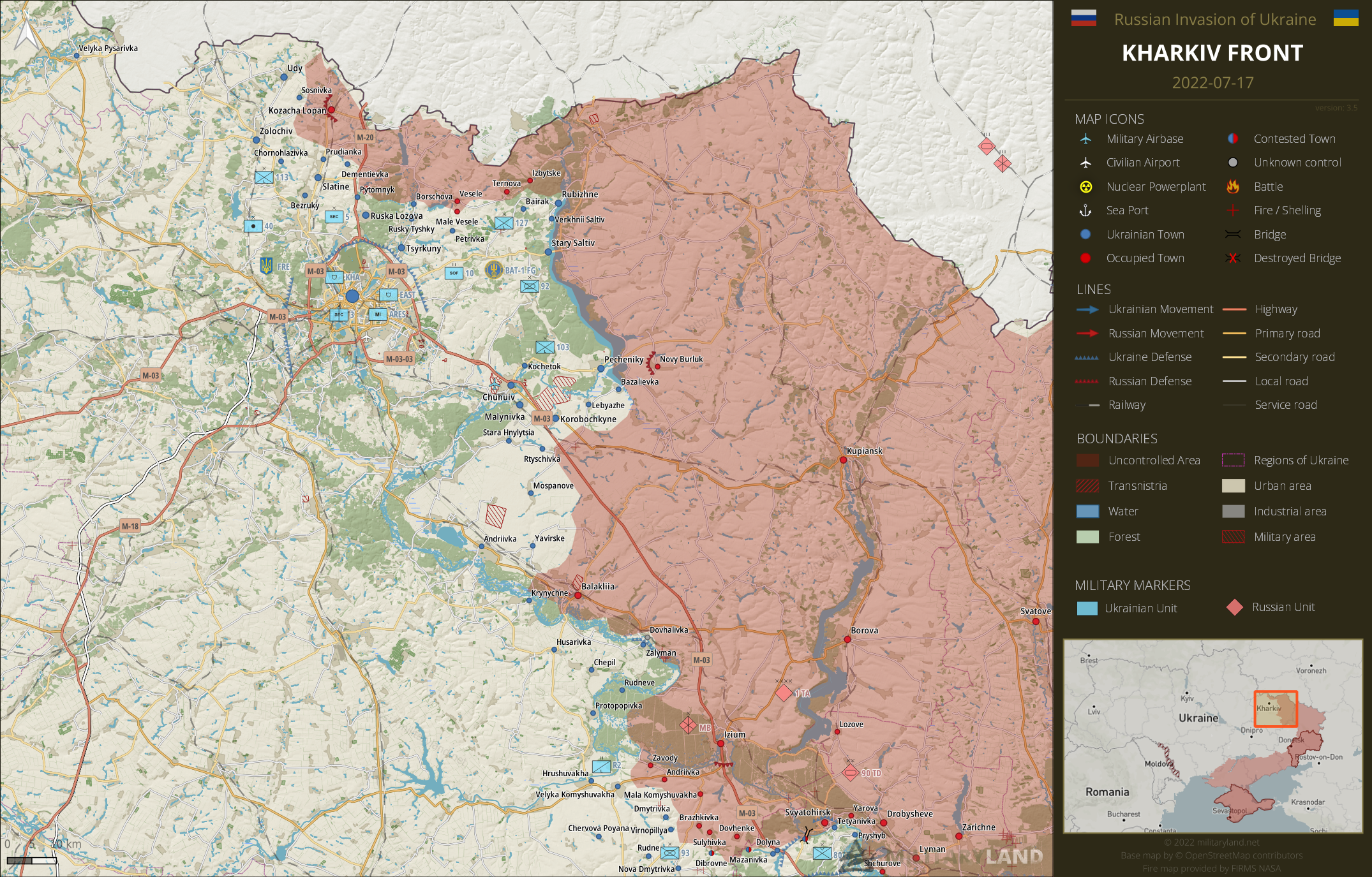 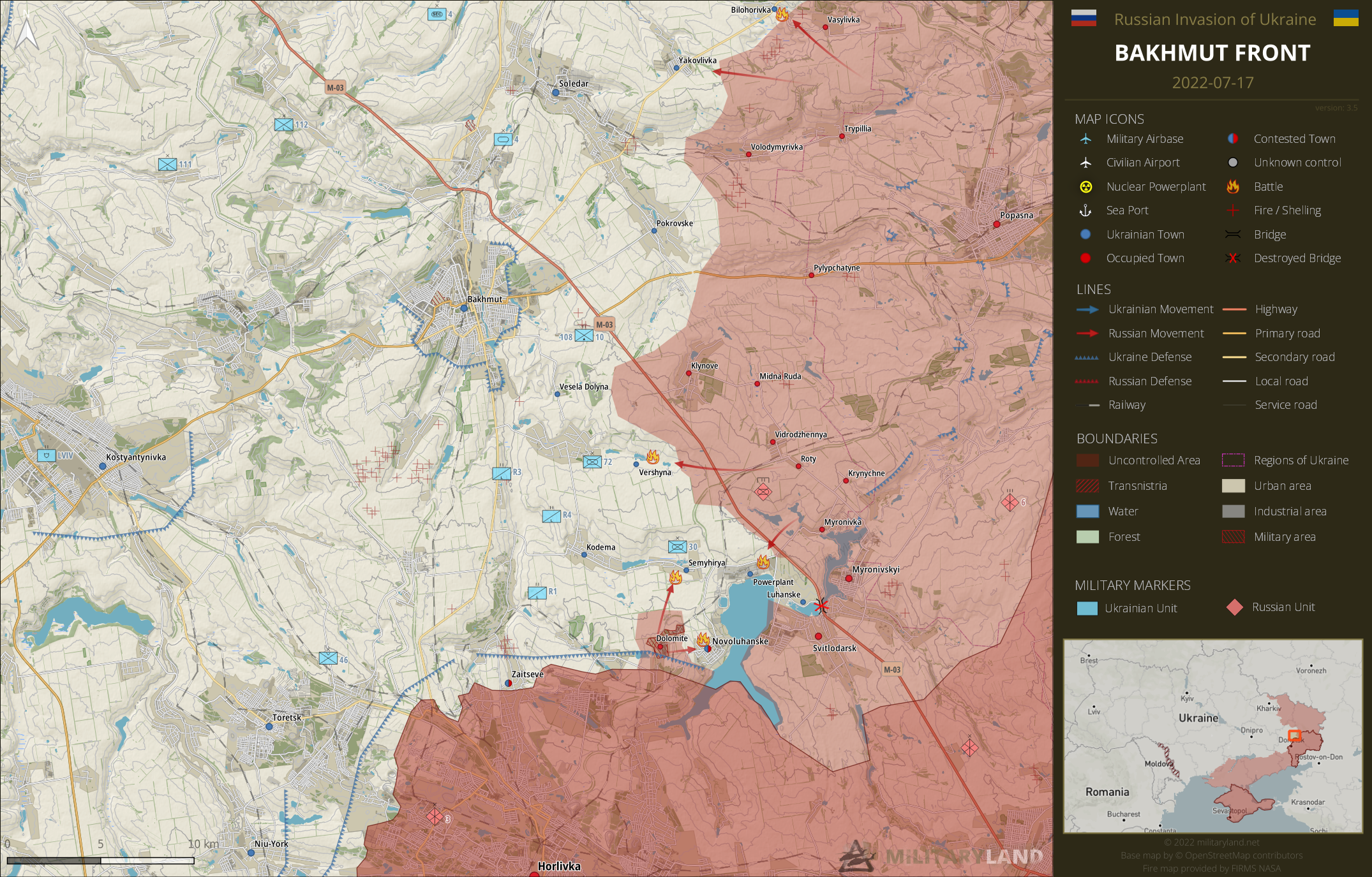 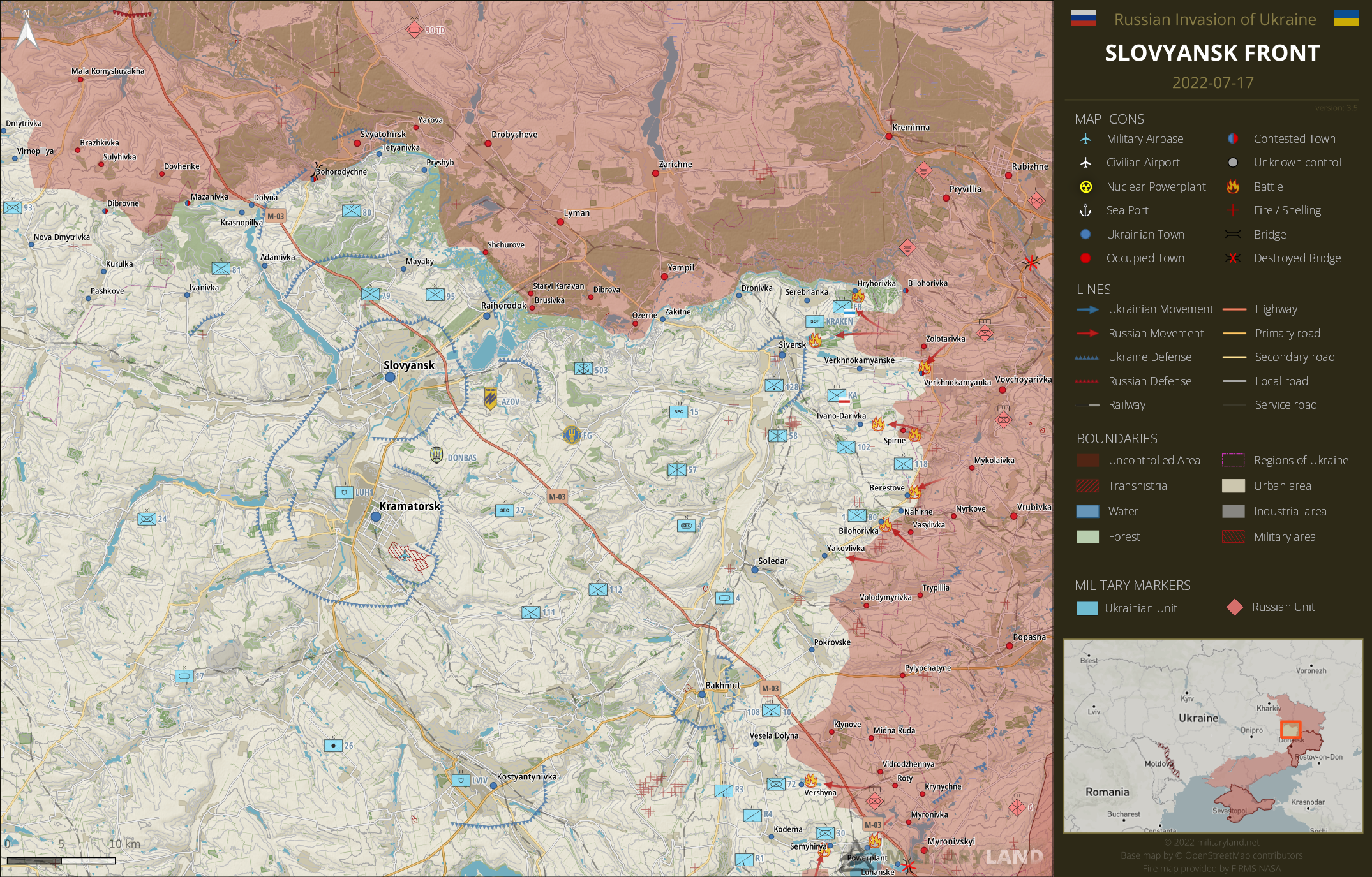 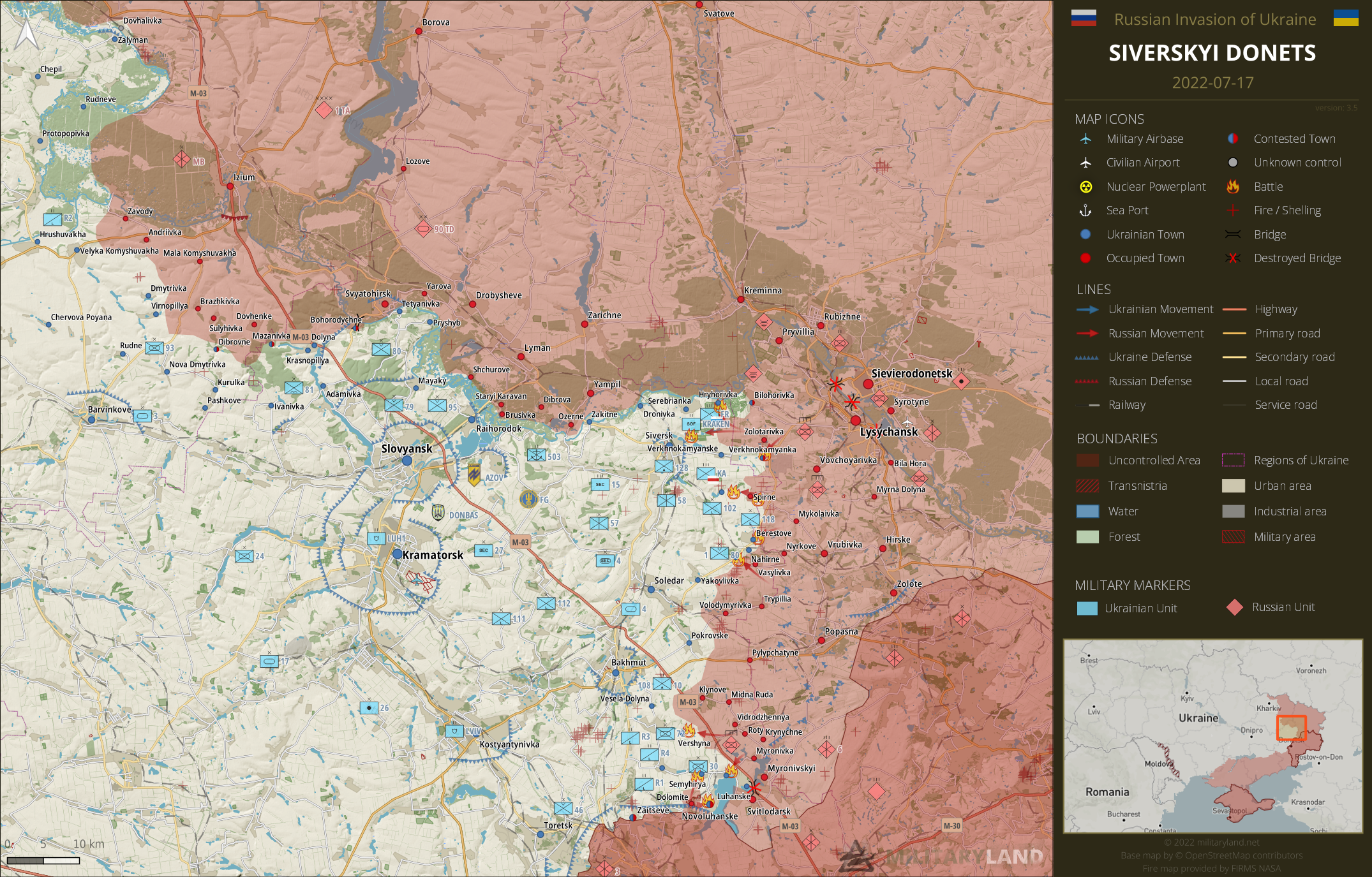 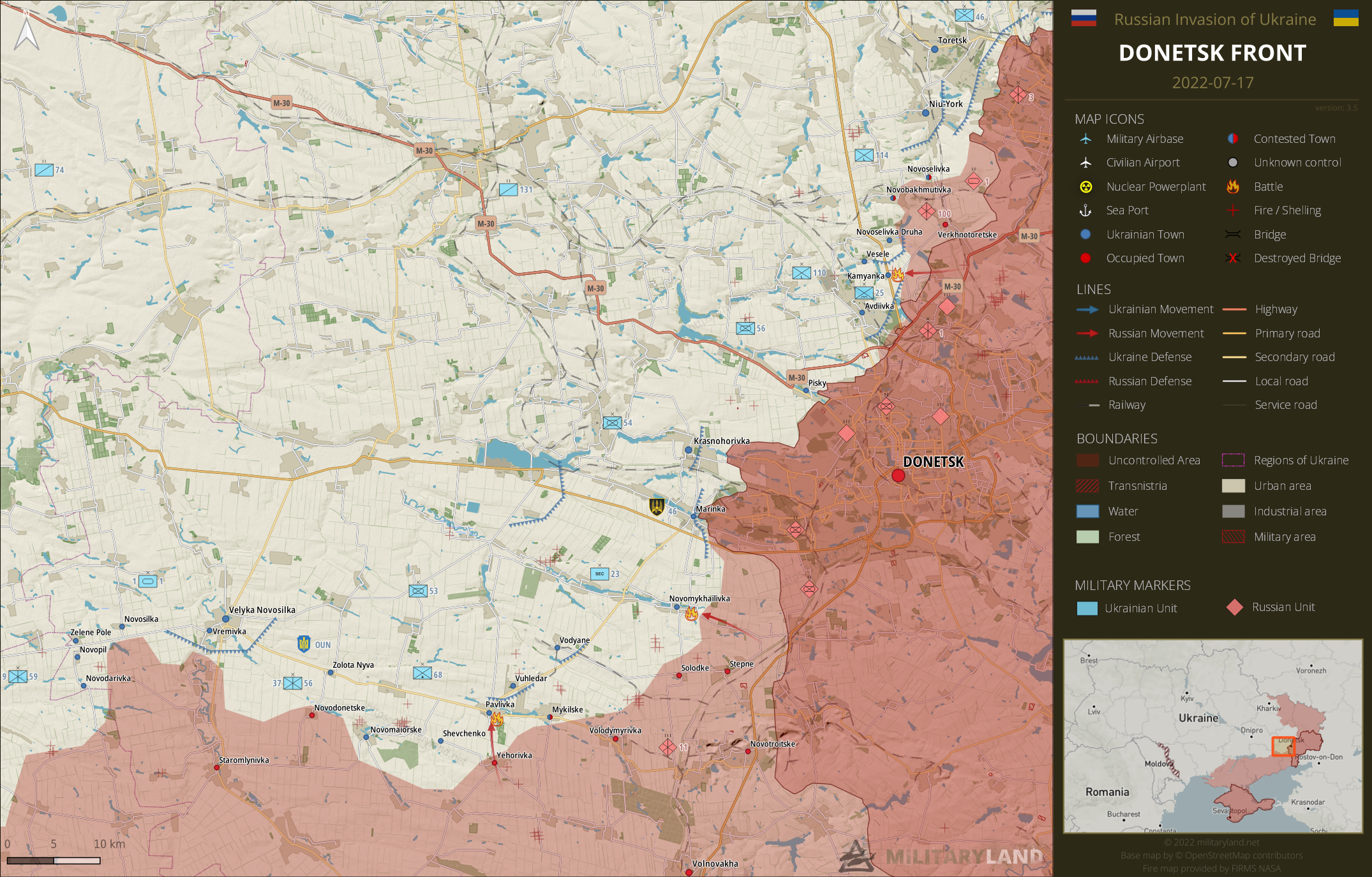 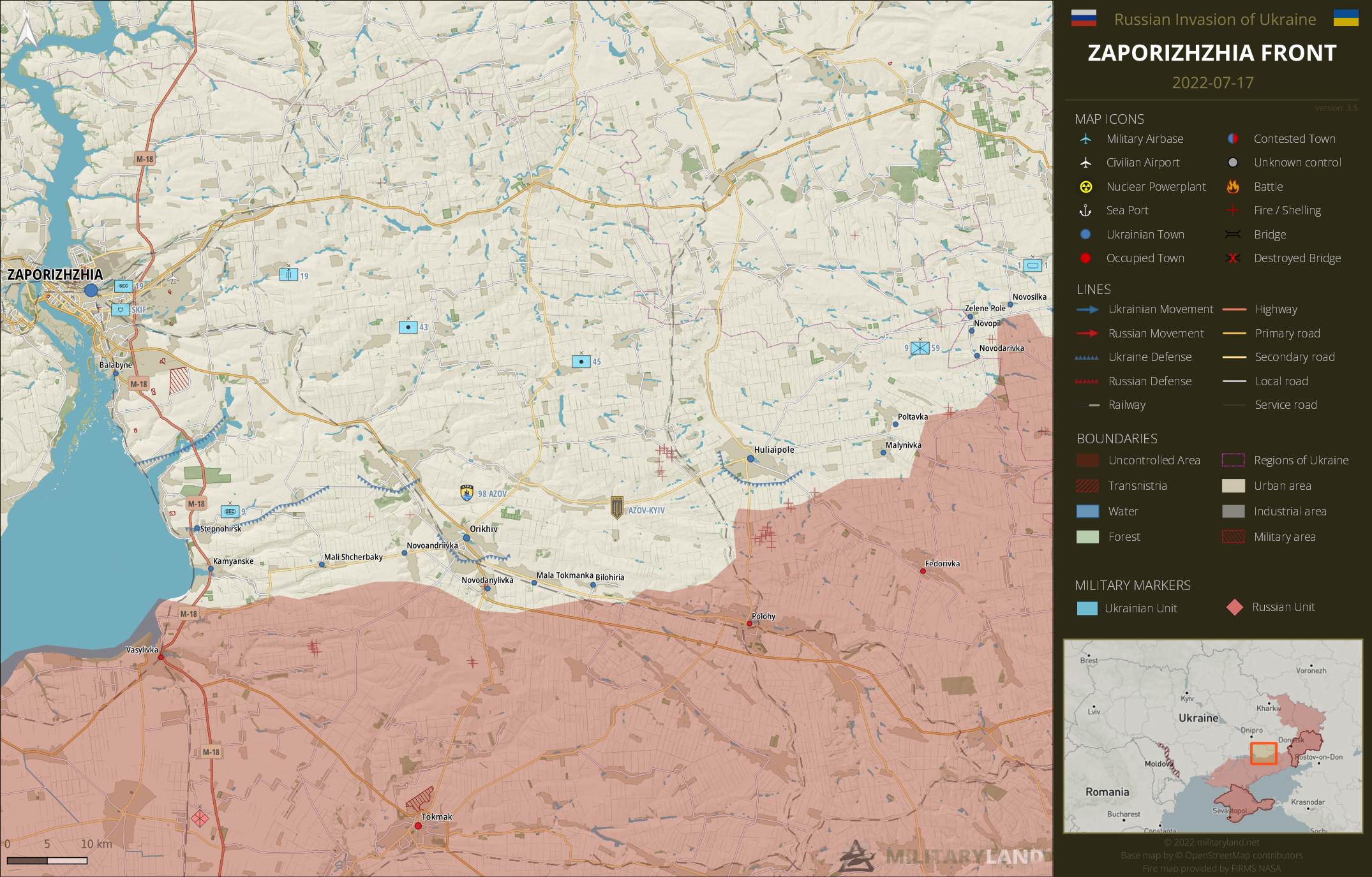 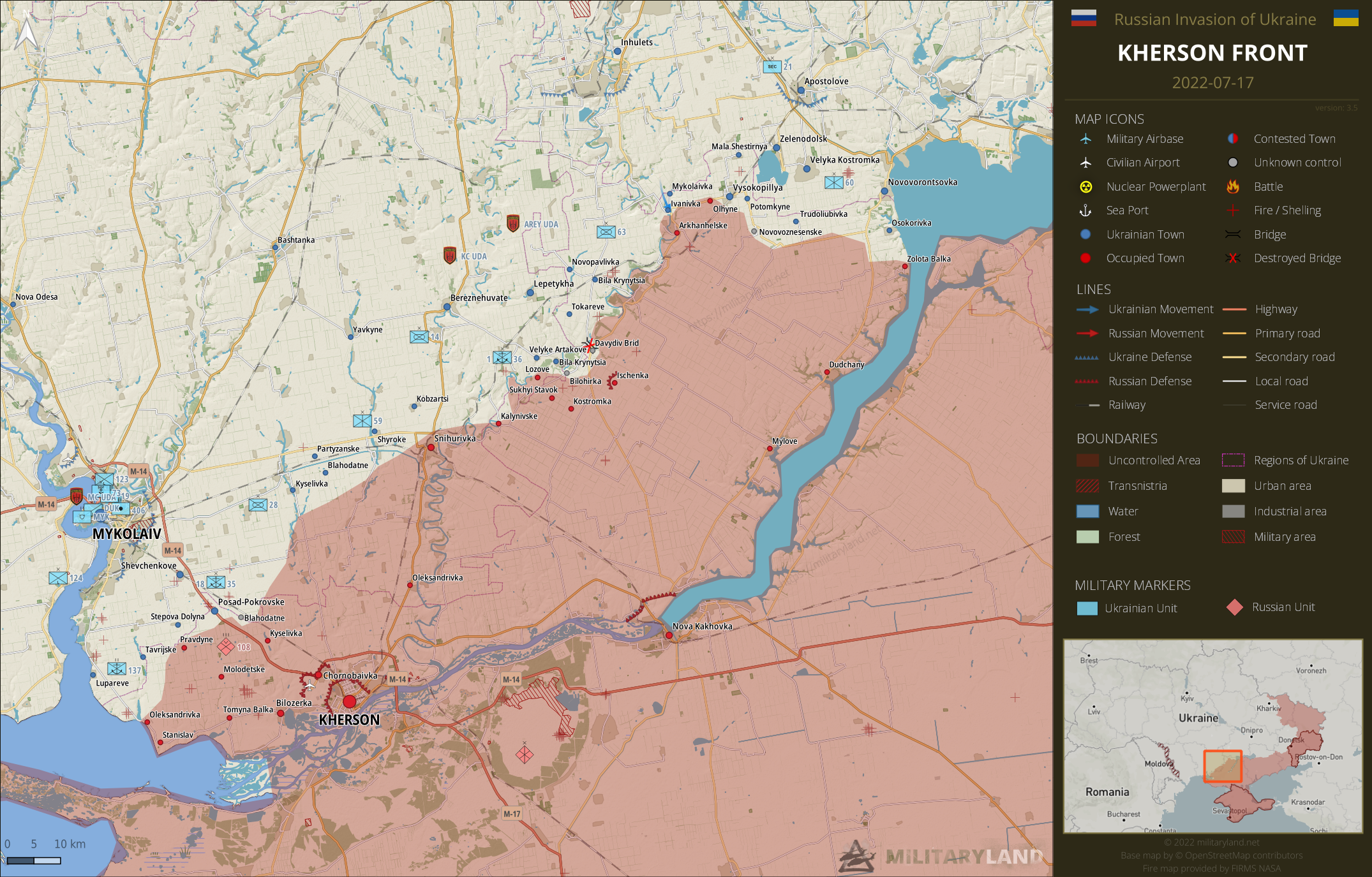 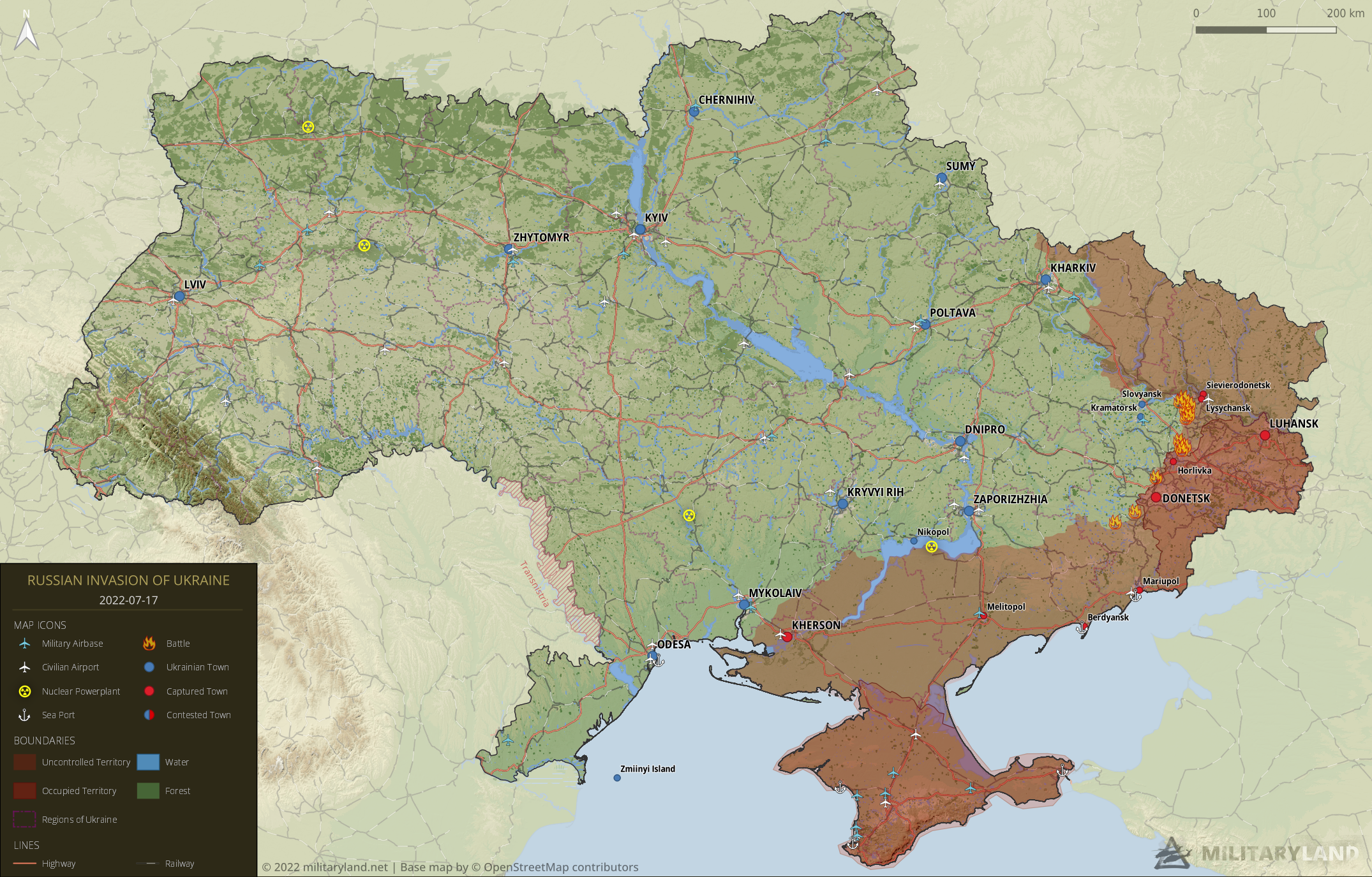 looks like Dementievka was contested.
“Kedr” special forces of the Defence Intelligence (GUR) of Ukraine destroyed the forward reconnaissance detachment of the marines of the Northern Fleet of the Russian Federation that was located directly in Dementievka https://youtu.be/4ekZzZpIaFI

Practically no advances in the last 2 weeks. Who will blink first?

The operational pause was officially ended by shoigu. So chances are that russia will try. Let z see how far they come in the rest of july. Russia is on the clock, i still believe that. My question is: when is russias time over. My money is on august.

The Russians will try to push westward but let’s not forget the Ukrainians have also announced a summer offensive in the south. How will these parallel offensives play out? Which one will start first? How will it impact the other one? The stakes are high for both sides.

they are also already in a offensive in kherson, don’t really know how it goes tho, but i haven’t read or heard of any major succes there, they were like 10km away from kherson, but i think they already lost their progress and got pushed back to the original frontline

No, the Ukrainians were not pushed back to the original frontline. In fact, I don’t know of a single settlement that has been retaken by the Russians in Kherson.

they did try to go for a offensive in kherson already like a month or 2 ago. in davydiv brid and there they had some success, but were immediately pushed back

As long as russia has the upper hand they will not let ukraine take the dnjepr west bank. It is simply to important. But a southern offensive may be a reason to stop the donetzk offensive. It is highly probable that the stalemate will continue for quite a while. Winter is coming.

I don’t think the stalemate will last until winter. I believe Siversk will be taken this month.

They probably crawl into Siversk in a week or maybe two. It’s not the best spot to defend. Good place to be squashed from the hill West and South of the town.

Well, yes, that’s why they don’t rush to take Siversk. Their objective is to take the hills overlooking the city first.

they are well prepared for a longer war. they didn’t want a long war, but now they don’t have a choice. this war will possibly take 2-3 years if not longer. i don’t see that a major counteroffensive will do much in terms of the lenght of the war, but war is unpredictable so who knows.

They aren’t prepared for longer war, there is no indication that they predicted it will last as long as it does now. They are using T-62 tanks, which are obsolete in every way, and hunting for conscripts in DNR and LPR. Thats not an indication of being well prepared, thats indication of desperation.

T-62 tanks aren’t useless. after all a tank is better than no tank. those T-62s are mostly for the DNR and LPR forces (they are the dumpster for the russian army) the russian forces use more modern tanks T-80s T-72s. and that they are in a process to fortify is a good indicator for a long war.

You said they are well prepared for a longer war. Them starting to fortify is reacting to the situation, not indication of earlier planning. Getting convicts out of the prisons to fight is scraping bottom of barrel 🙂

Ukraine just continues to grind down the Russian offensive as they build for their own fall offensive. They described this months ago but few seem to have noticed for some reason. Their moves around Kherson are not a full scale offensive. It’s more of a shaping operation.