Russian forces continue to attack and advance towards Bakhmut and Slavyansk, despite the announced break by the Russian president.

The threat of Russian/Belarusian invasion from the north remains high. Ukrainian forces are building additional fortification and prepare for the possible new front.

Note: due to changes on the battlefield, the maps has been repositioned to reflect the changes 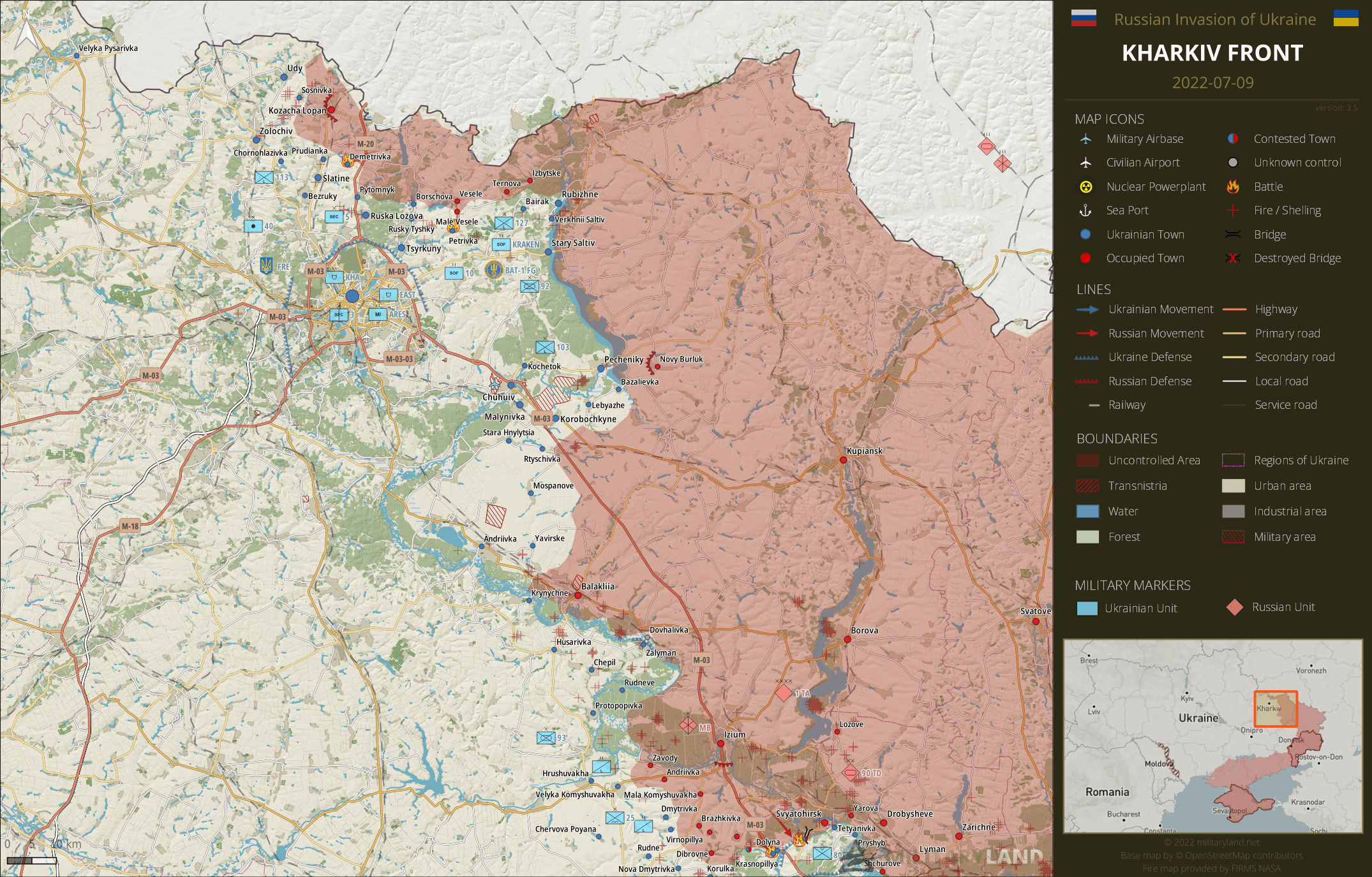 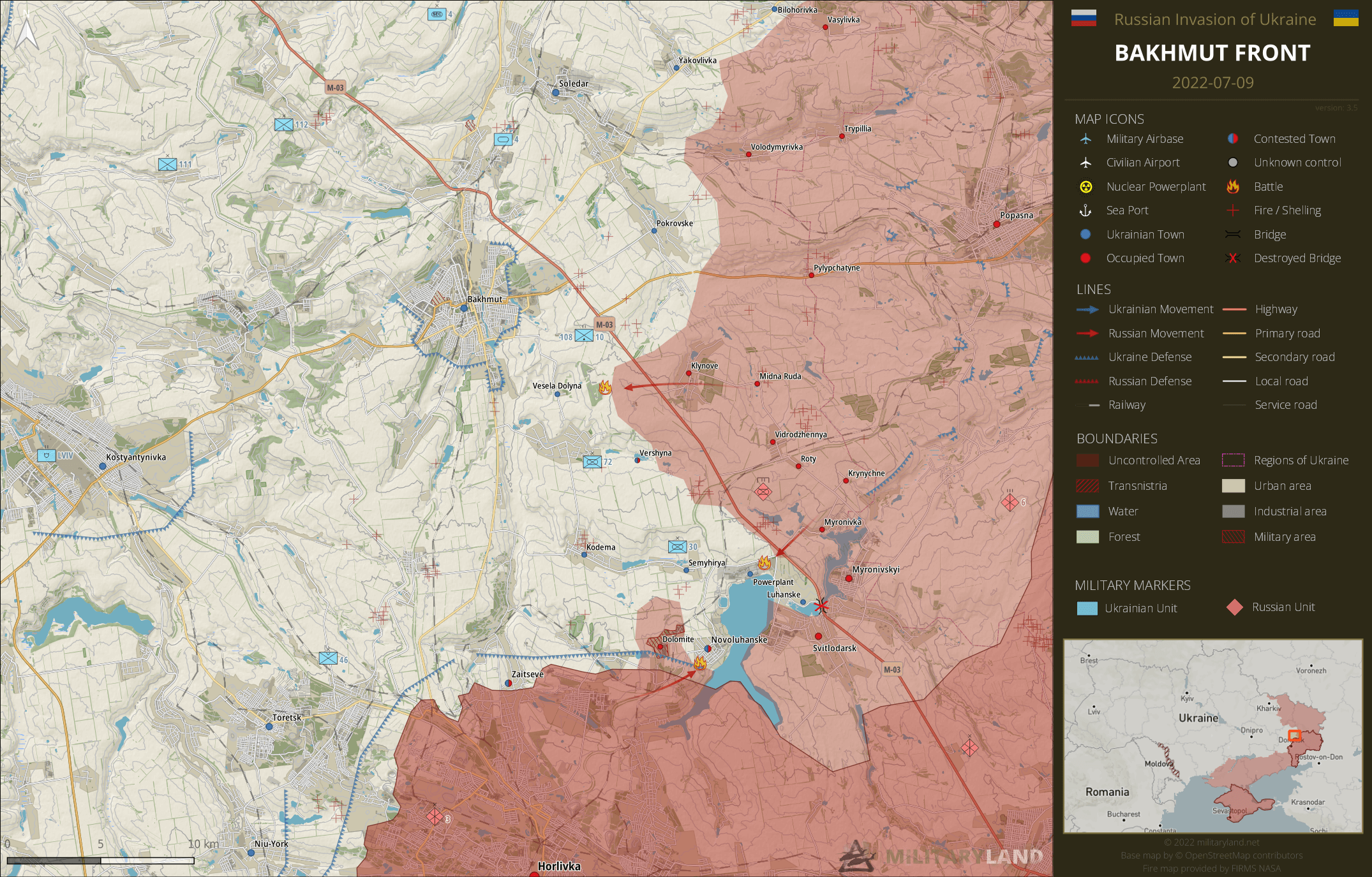 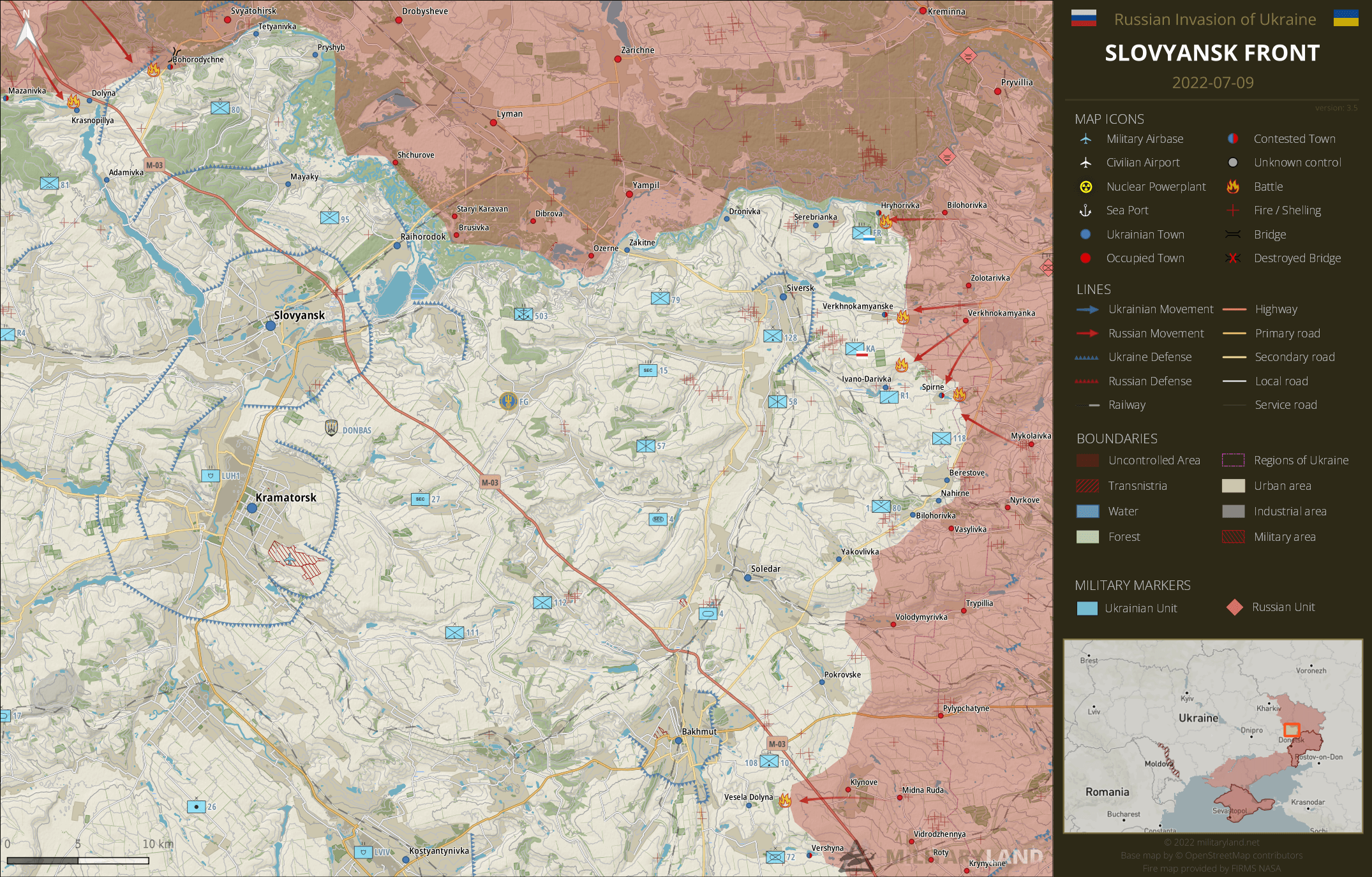 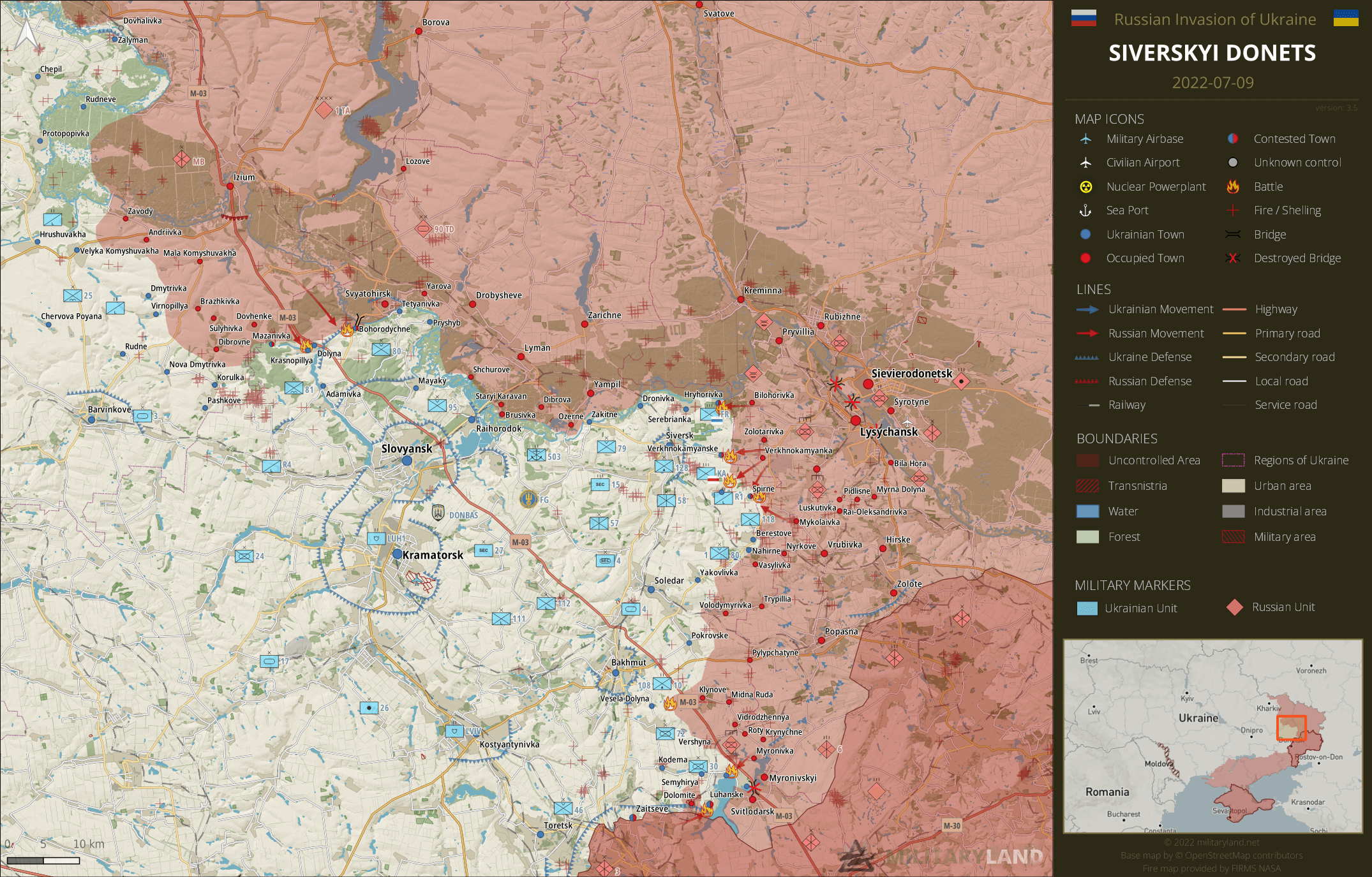 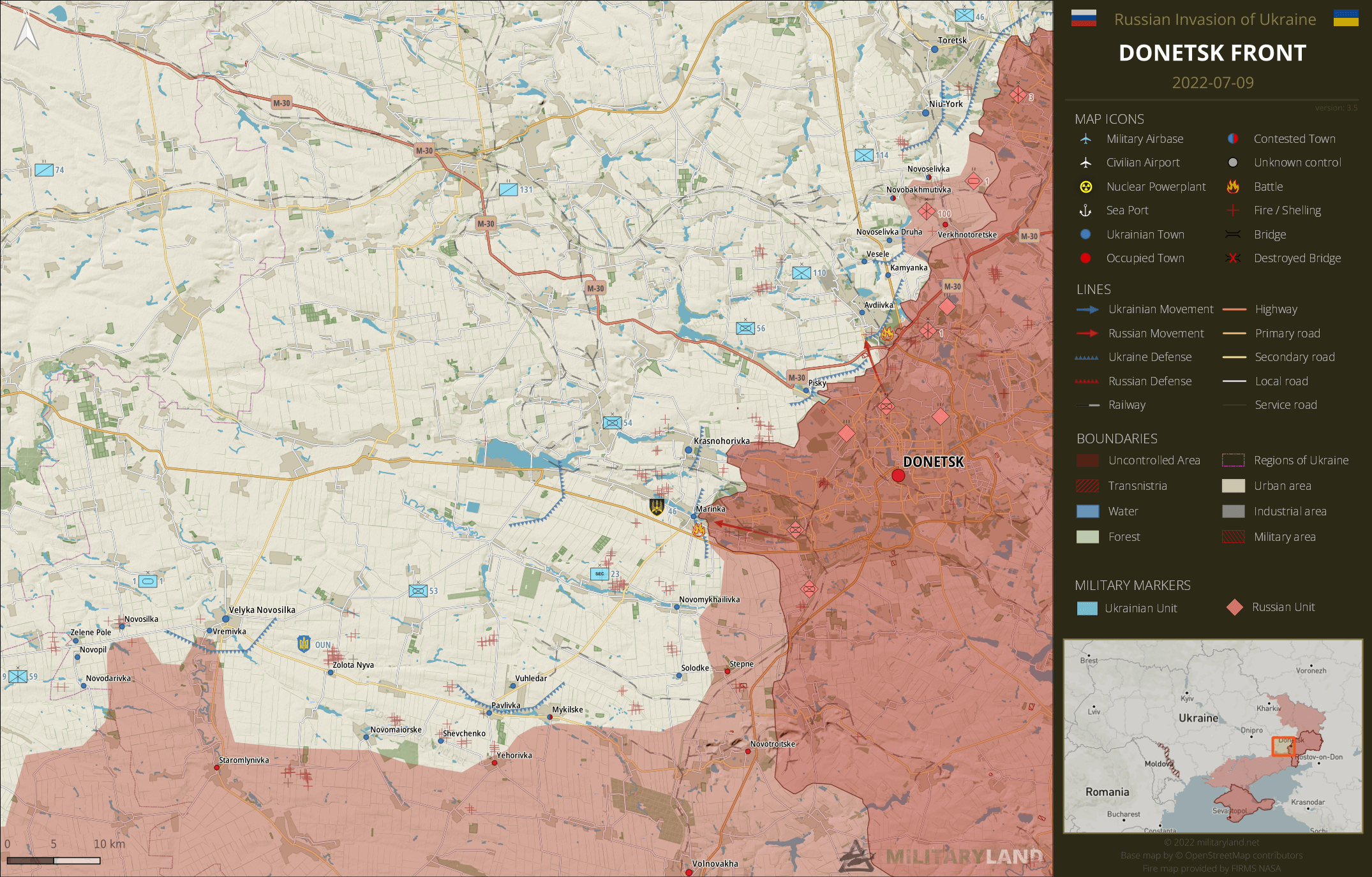 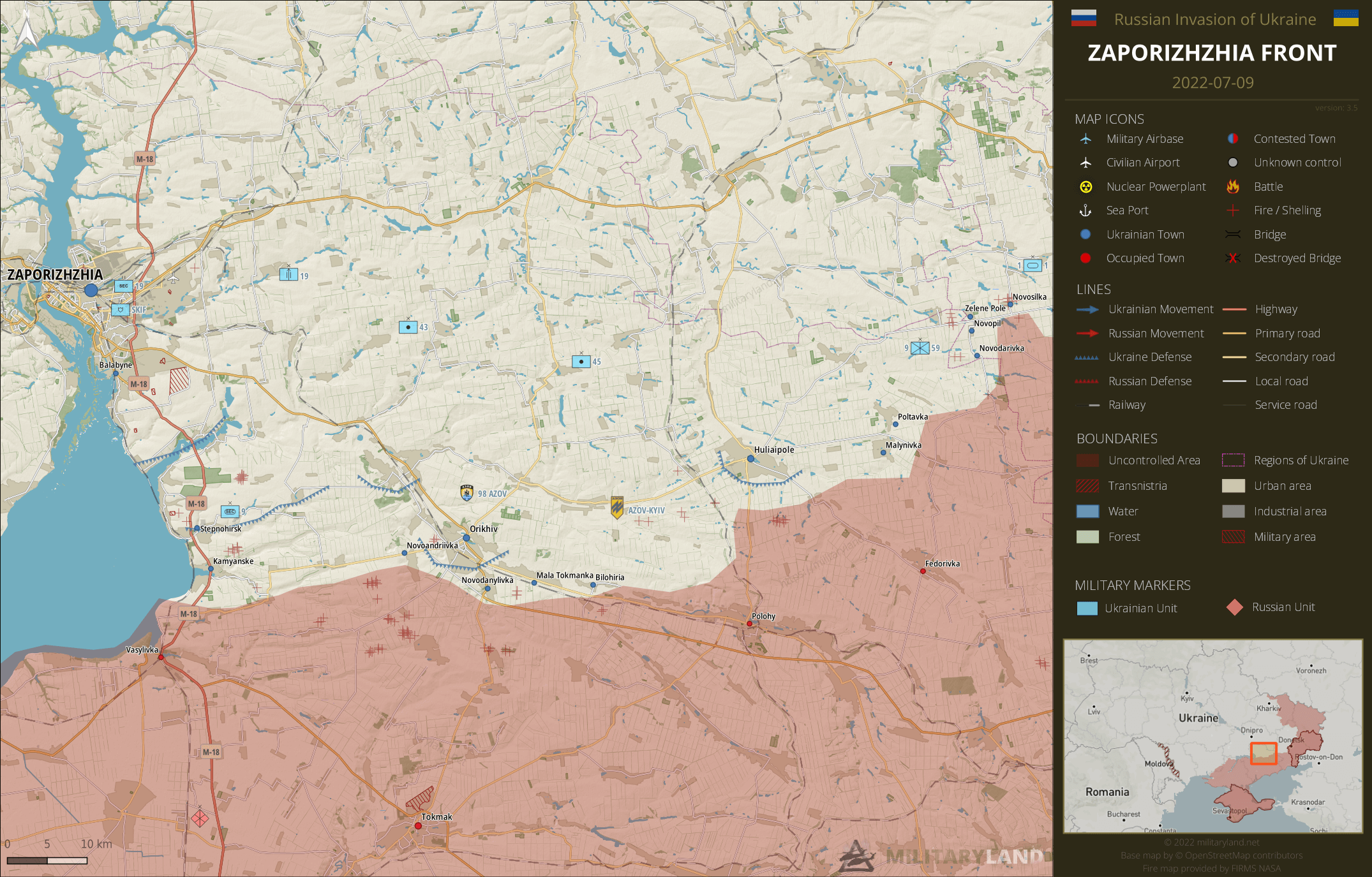 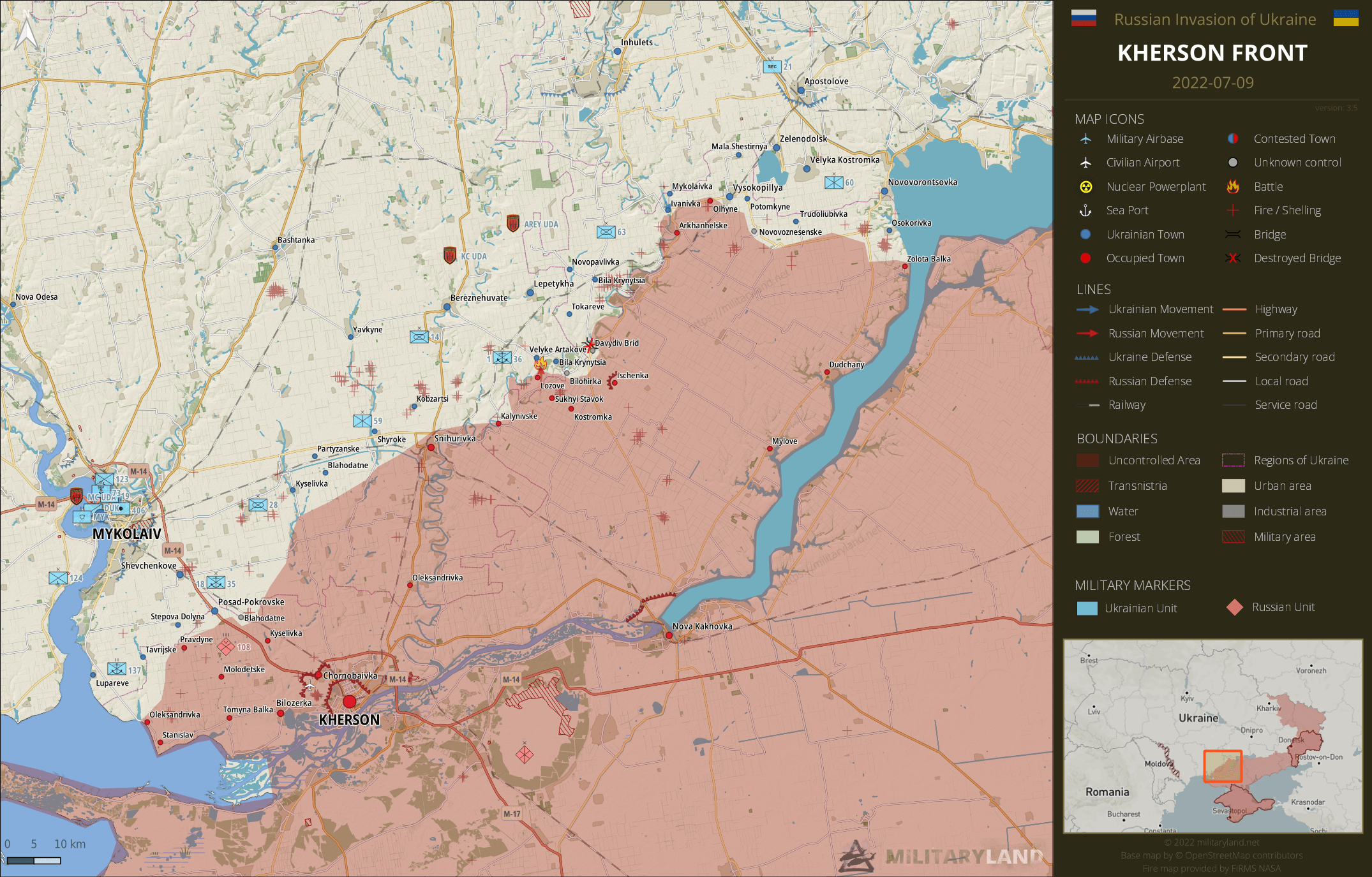 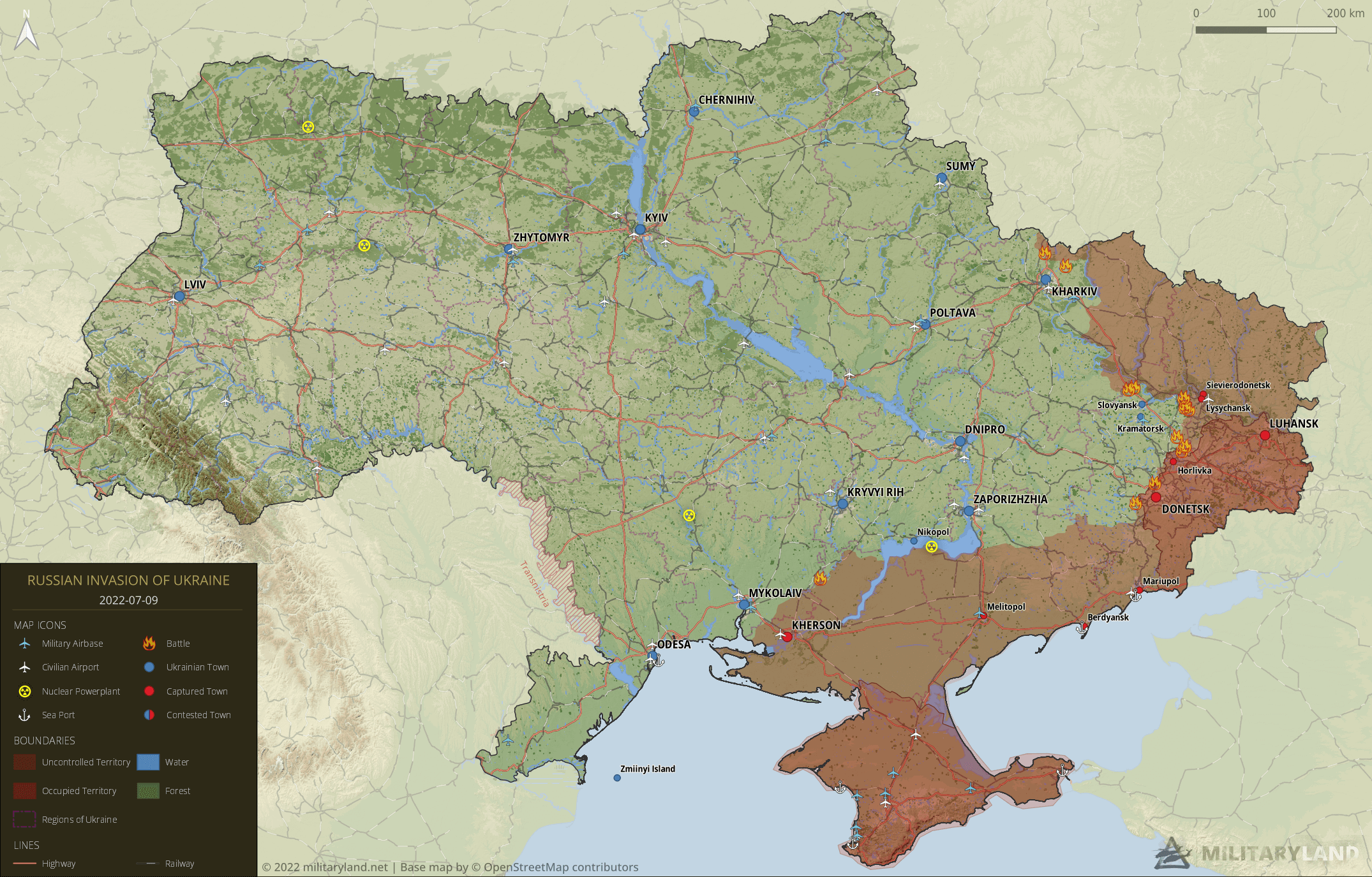 The Russians claim they have taken full control of Bohorodychne and that this is confirmed by Ukrainian sources. I haven’t checked and can’t comment on this at this point.

This channel is made by russian intelligence, SSU says

That’s what I thought at first, but seeing Reznikov confirmed it… it would be very dangerous to trick their own people like this. If they later try to attack people wouldn’t believe and there would be many more dead… possibly risking a civilian presence that would slow down the operation.

With the number of strikes on Russian logistics hubs it’s time to wonder if we’re seeing the high water mark of their offensive on these maps. How do they drive forward into tougher defenses than what they faced in Sievierodonetsk with their supply lines depleted and pushed even further back?

I would like to add that in recent days the Armed Forces of Ukraine have indeed succeeded in destroying about 10 ammunition depots. A vivid example of the sloppiness and unprofessionalism of the Armed Forces of RF, it’s time to shoot the guilty. Stalin is not on them, unfortunately.

Ukrainians blowing up RU logistics hubs are in the process of shooting the guilty but if you want to add more RU forces to the list, have at it. Put em all on that list until they get out of Ukraine.

Yes, there are still difficulties. But I do not even doubt the victory of the Russian Federation, although this is not my country. I’m just amused by the naive statements of the Pindos, who doesn’t even know a damn thing about Ukraine or Russia.

Good luck with all that mess

The front line on the map is, as usual, objective. I don’t understand the tactics of the Russian army from the word at all. Why was it necessary to release the Armed Forces of Ukraine from the encircled Lisichansk? About 40 confirmed units on the “fair” – great success.. About 200 prisoners at all.

It wasn’t up the the Russians. It was necessary for the Ukrainians to release themselves from encirclement. The reason they stay out in salients like that till the bitter end is because they’re confident in their ability to fight their way through when necessary.

I don’t think so. Rather, this is one of the possible factors, but I think the point is that the RA, for some for me unknown reason, “allows” them to do this, and “hohly” understand this. As I said, the plan of RA is for me not clear.

they simply were unable to reach operational goals (encircle and destroy the Donbas Detachment’s units). They only got any gains after weeks of leveling everything and throwing the elite units (airborne and marines + mercenaries) into the fry. This is repeated experience of ‘goodwill gesture’.

Actually less than 40 units. Some “exhibits” were captured already 2- 3 months ago.

Why do you take out all the Volunteer Corps units in the summary maps, when in the deployment map they are present?

A representative of Right Sector approach me a few months ago and expressed the wish to do not show Volunteer Corps units on the Summaries map.

Ok, thanks for the info! Slava Ukraini!

Apparently, Petrivska (S. of Vuhledar) is back in Ukrainian hands.

In this messeage nothing about Petrovka… Maybe wrong link. Anyway according to militarymaps, it is deep enough in the rear of RA. Maybe you mean Pavlovka?

Last edited 2 months ago by Vladimir
0
0

You need to read the whole thread. Especially:

“2 days ago, the Operational Command “East” of the Ukrainian Army posted video that claimed to show “over 40″ Russian vehicles destroyed by Ukrainian Artillery fire on a Russian rear base.”

Might make sense to add Zaliznychne (SE of Chuhuiv) to your map, just in case..

Those Oblasts are probably gonna be the most focused ones in a massive counter-attack since Russian and Ukrainian forces there are equal in strength and Ukraine will Strengthen their forces in those areas, but russian seem to have build up a good defense so it seems like we’ll have to wait till then

I think it’s worth doing because puttin a plug on the Crimea peninsula would help a lot as all land forces could focus on the east. Also better to shoot Crimea bridge from Zaporizhia to build on the eventual Crimea takeover.

Link? I can’t find any recent source on that…

According to Haidai to outskirts of Lysychansk are still under ukrainian control, namely Bilohorivka and Zolotarivka:

We know Ukrainian news – the same shit as the official Russian reports.

Where did the General Staff say that Bilohorivka was under the Russians?

From my interpretation of todays Update of the General Staff there is at least fighting going on in Bilohorivka (they wrote about artillery fire there). And a withdrawal from the settlements were never announced… Nor the capturement of these two villages…

For me it seems that both mentioned villages are really grey zone but not under russian control. 6 days ago Haidai mentioned that these villages were captured (https://24tv.ua/zolotarivka-bilogorivka-luganska-oblast-pid-kontrolem-rosiyan_n2073210), but now he writes they aren’t, so again contested.

The General Staff reported yesterday that an attempt to storm in direction Zolotarivka – Verkhnokamyanske didn’t work, and the russians dispersed in the area of Zolotarivka. Deepstatemap by the way marks the outskirts (still Oblast Luhansk) of both villages as grey which seems very realistic.

It seems both sides have so much artillery that troops go in momentarily but flee really easily when shells start coming. Hence these areas which nobody controls…

as for the attack on Grigorovka , it could also occur from the north side from the opposite bank of the river

[Jerome: Is there a way to prevent copied twitter links from automatically exceeding your new 300 char. limit the way they are displayed here?]

Yes, put it as a link -> UAWeapons

Bloggers (Rybar and others more or less objective) unanimously reported yesterday about the capture of Belogorovka and Zolotarevka, the reflection of the attack of VSU and the development of an attack on Grigorovka and Serebryanka. I can post a link. I believe HERE Russian bloggers, no Gaidai.

Last edited 2 months ago by Vladimir
0
-2

And by the way: Yesterday a video of the 24th mechanized brigade was published, where they destroyed a column of russian tanks and armored vehicles, which where moving in Luhansk Oblast

And liveuamap shows Bilohorivka as UKR-controlled and Zolotarivka as RUS-controlled. https://liveuamap.com/
This can only mean that fighting is ongoing and that both towns can change hands within hours.

We would need a video of the flag hoisted next to the city administration. I don’t particularly trust bloggers on either side.

Does also not help much. There were lots of towns in Cherson Oblast with one day the Russian, the next day the Ukrainian flag again hoisted near the town hall..

Exactly what I mean (see other comments of mine). It’s obvious that it’s more grey zone than control, especially since the villages have already changed hands once…

That would explain the big losses of 250 troops and 35 tanks on Thursday… https://www.mil.gov.ua/news/2022/07/08/vtrati-rosijskih-okupantiv-stanovlyat-ponad-1637-tankiv-znishheno-majzhe-3811-bojovih-bronovanih-mashin-voroga-%E2%80%93-generalnij-shtab-zs-ukraini/