Russian president Putin ordered a break for exhausted troops, which participated in the operation to capture Sievierodonetsk and Lysychansk. The Russian advance has thus stalled, but the attacks has not ceased and some elements of the Russian army are still trying to advance towards Slovyansk and Kramatorsk.

Ukrainian troops conducted a special operation and landed on Zmiinyi Island. The troops recovered some equipment and documents left behind by Russian troops and hoisted the Ukrainian flag on the island. 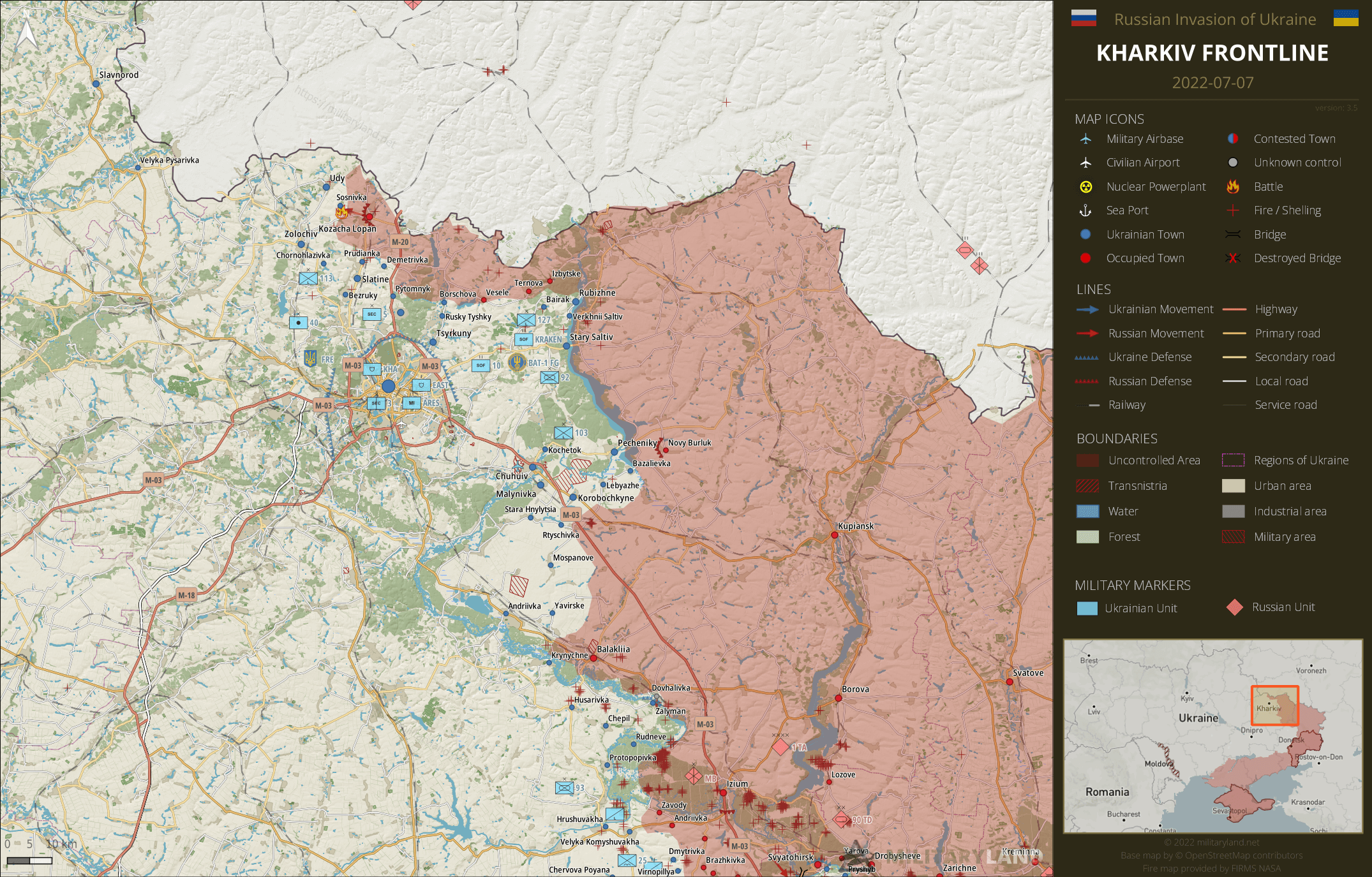 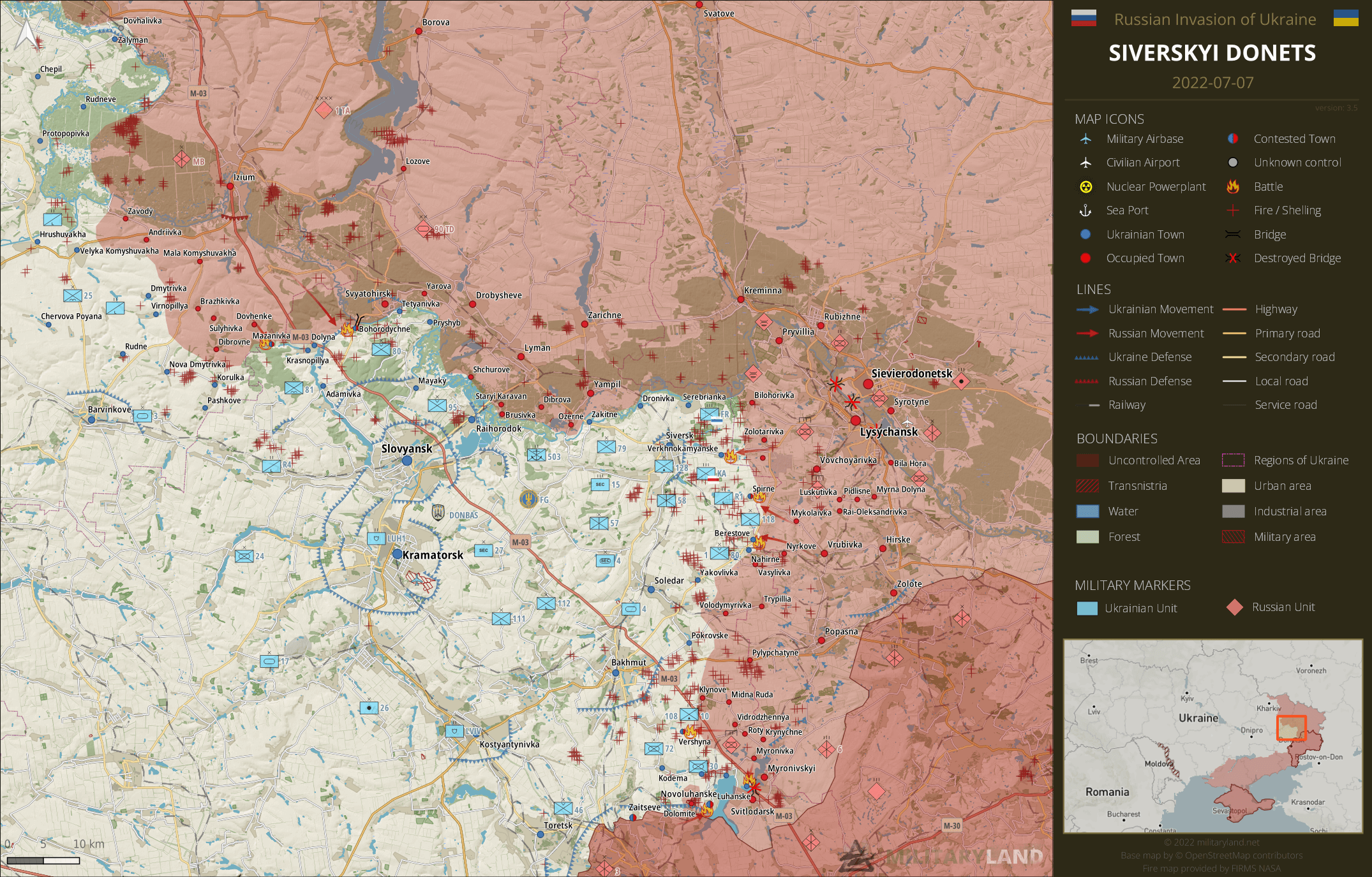 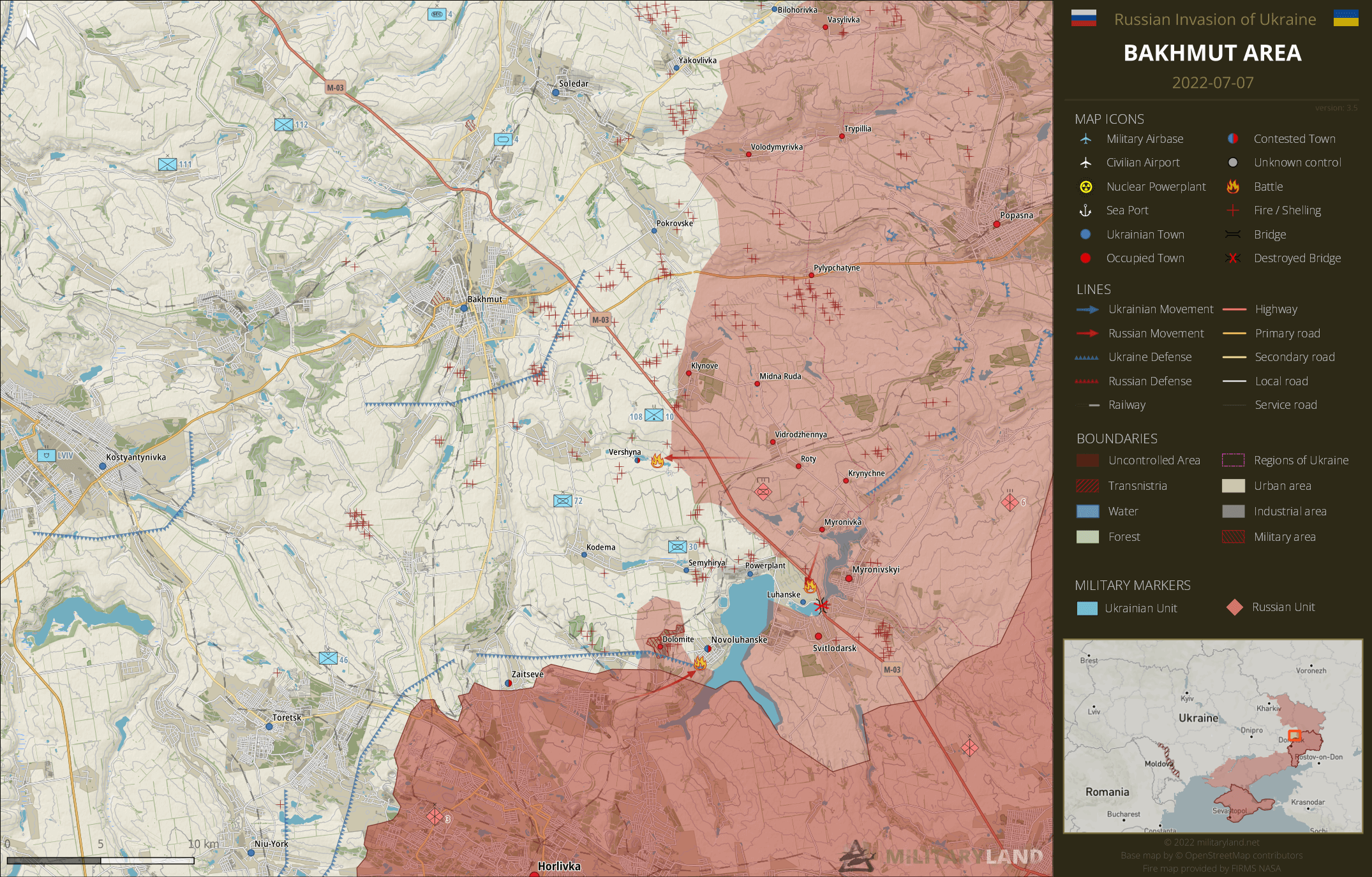 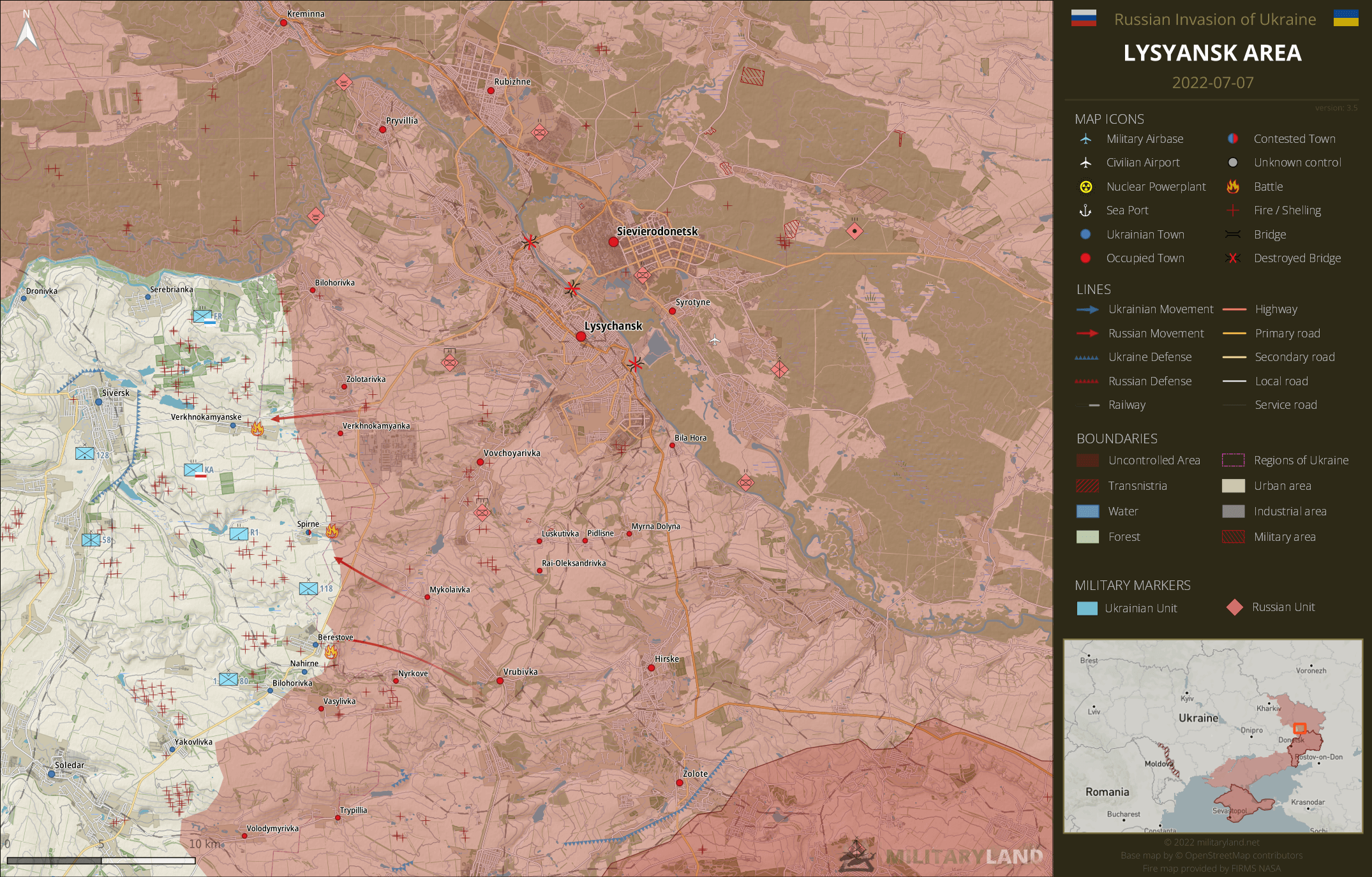 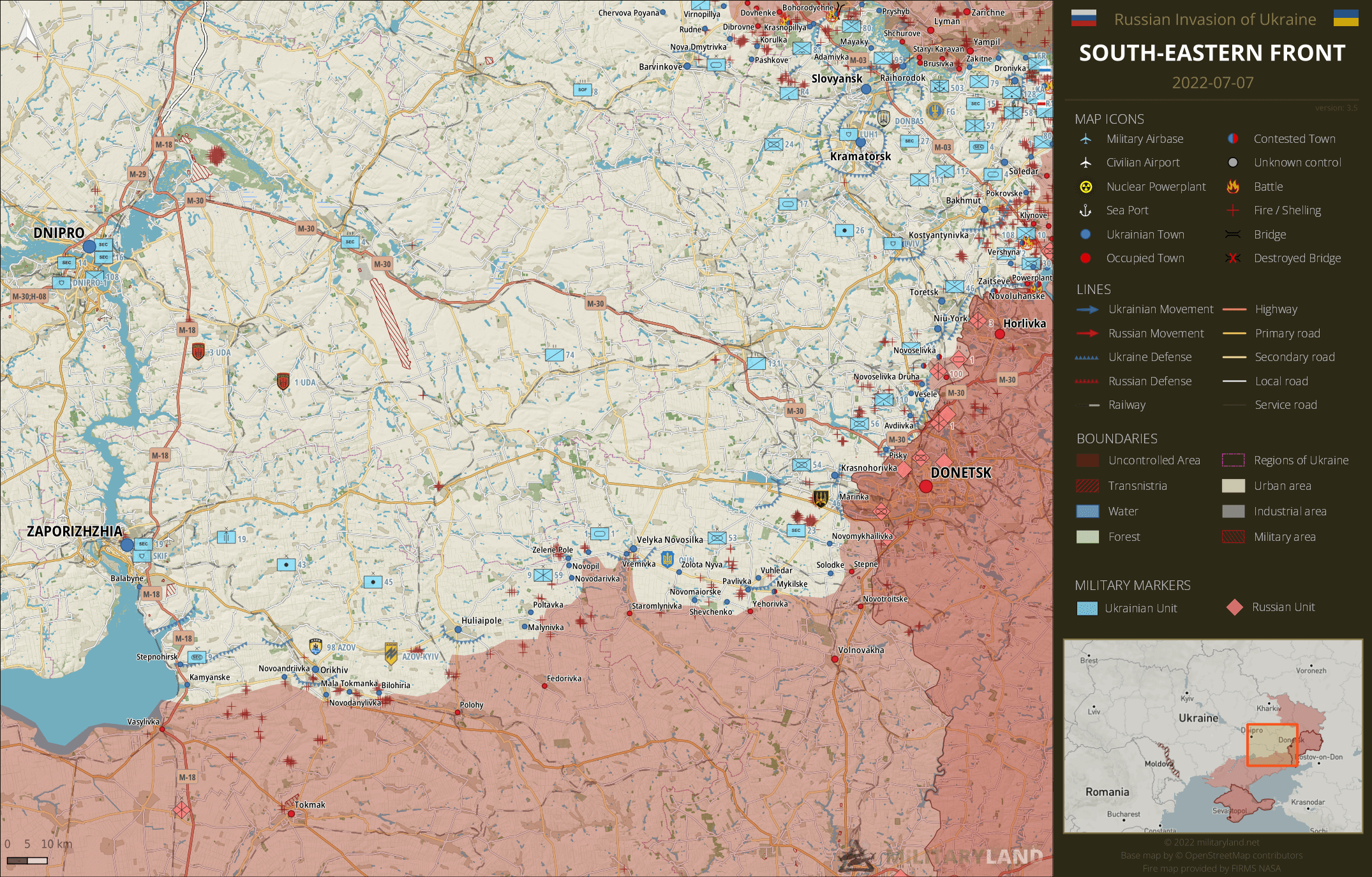 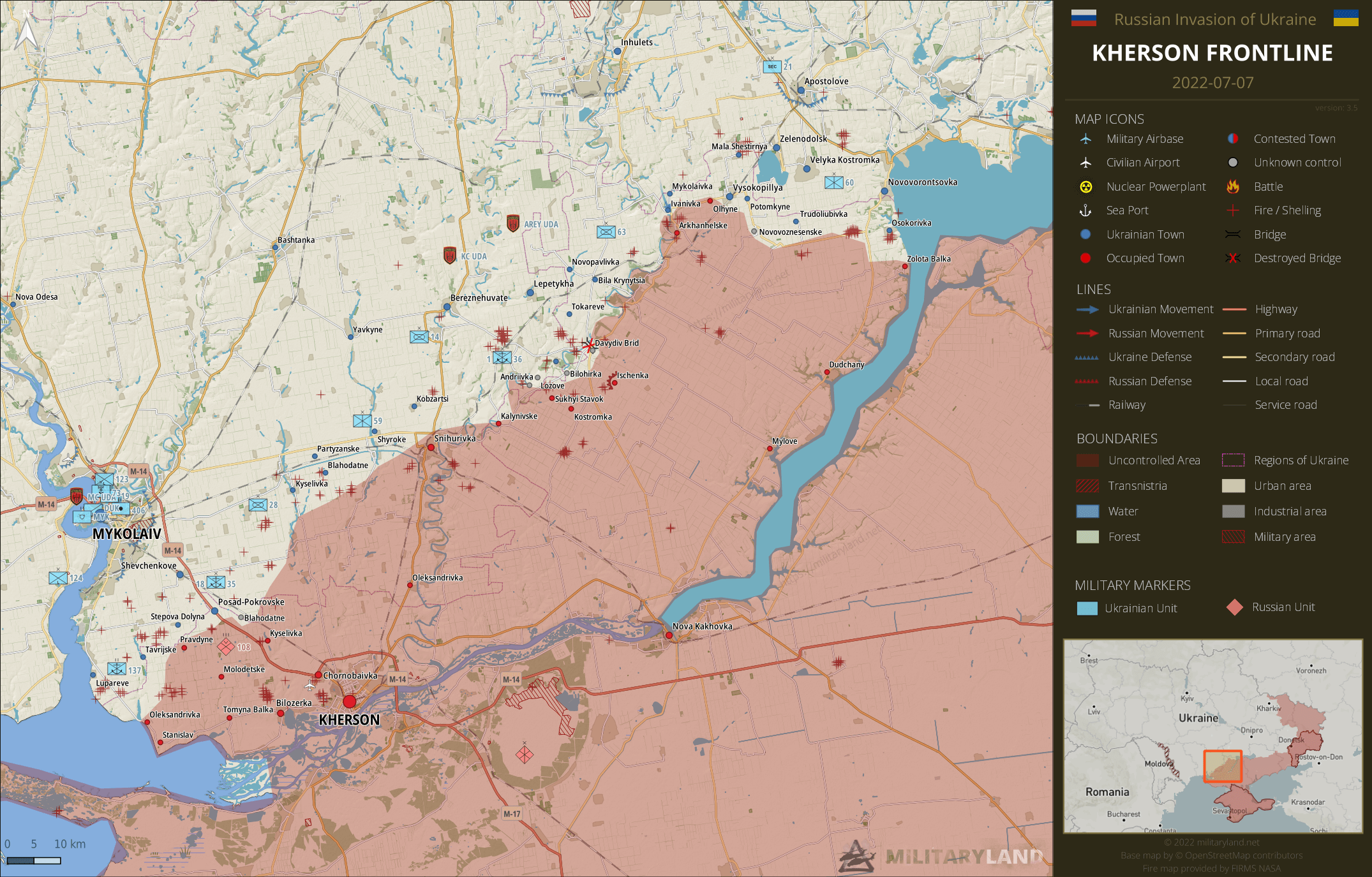 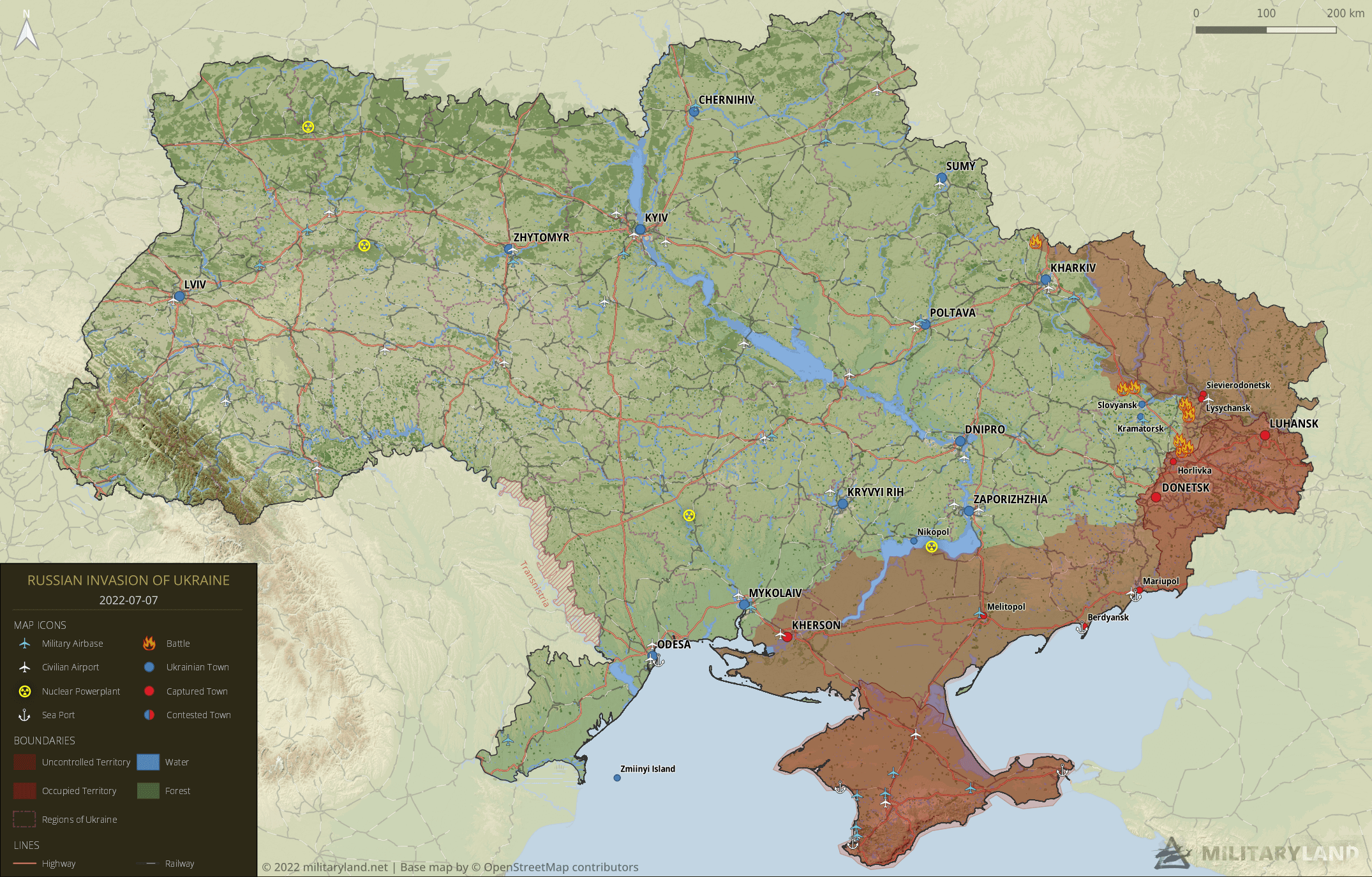 Due to the increase of off-topic messages in our Comment section, the following changes have been made:

We’ll see how this works and move forward from there. Thanks for understanding.

MT-LB now primary APC for reinforcements. Has low speed, all of 14mm of armor and a single MG!

It warms my heart, check out the latest news reports, Russian infantry reinforcements are now primarily being issued MT-LBs for transportation!!

It’s a 60 year old tractor whose original purpose was towing artillery. It’s slow and poorly armored and will die to any RPG, and has all of 1 MG!

Finally Jerome, glad to see you’re taking some action after letting your comments section get infested.

Other OSINT people map an Ukrainian controlled bridgehead east of Stary Saltiv across the river on the Kharkiv frontline. What’s your reason to not map it?

Because I have not yet seen a solid proof of the bridgehead and I do not base my maps on “confirmed by call” phase or rumors spread by random Twitter accounts.

I like the videos from the austrian military. This is the latest, from today
https://www.youtube.com/watch?v=dEbLuAPobao

He is very wrong concering his 80% value added idea and keeps repeating it. That is so far off, that i actually sometimes think that he is paid by the Kremlin.

this is typical Western fallacy repeated constantly ignoring the real input into economy (even if we ignore that such an input was greatly impaired by the ‘insurgence’) of the country. Yes there is a lot of resources (though not only there) but even before war their exploitation was questionable.

Last edited 6 months ago by Noelle
0
0

It’s not clear to me that the whole region of Luhansk has fallen to the Russians. Is there confirmed information that Bilohorivka has been taken?

There is information about it on censor.net. Here is the link:

Serhiy Gaidai: “The Lugansk region is holding its own, there is no complete occupation”

There is a video from the village by Russian troops. Furthermore, UA reported that Russians are attacking Hryhorivka, which is next to Bilohorivka.

I appreciate that you’re respecting Ukraine’s desire for a press blackout regarding Kherson. But it’s also extremely interesting to see the FIRMS data and what is implied by the little we know.

Summer is making FIRMS less reliable as fires are starting which locals are often unable to extinguish due to the risk of being shot. The result is often a single artillery shell can appear a sustained barrage, as can a fire started from any means.

Yes, that is definitely something to keep in mind when looking at FIRMS for clues of what’s going on at the front. But I was talking specifically about Kherson and fires that have nothing to do with forests or fields. Look at the FIRMS and then look at the satellite images to see what’s there.

Ukraine badly needs a victory, and one that retakes significant territory.
The best opportunity for this is in the south.

I expect a large-scale operation to regain Kherson in the coming days/weeks – and one gets the impression the Russians are not ready for it. They’ve already lost half a dozen settlements in the last month or so.

well since lysychansk has fallen they will probably send more troops to the kherson region to defend it, we might even see them losing the ground they have taken. kherson is a very important region if they fail to take it back somehow, i don’t see much hope in the overall war.

Nothing, apart from your will, indicates any great and, importantly, effective counter-offensive.

The recent days we have seen ammunition depots being struck behind enemy lines using HIMARS and railway infrastructure blown up. Is it reasonable that this will affect the Russian fighting capabilities in the short term?

Not just the short term. This changes the war for Russia. They have to change how they organize their army. They have to keep big ammunition depots at least twice as far from the front now or keep losing massive amounts of materiel and personnel to these strikes.

That would mean that it would take longer to pulverize cities and it would further limit the use of new recruits. Presumably, that would slow or even jeopardize their progress altogether. What else could be done to stop them?

Russia’s main advantage, the thing that allows them to be on the offensive and hold off UKR counter-offensives, is that they have a massive amount of artillery. Take away that advantage and their second rate infantry is exposed. Their infantry is lousy without that wall of artillery fire.

Do you think Ukraine will be able to hold the Donbass? and will it be able to launch a counteroffensive with HIMARS and arms supplies from NATO countries

It depends on how much both sides are willing to sacrifice. I’m certain that Ukraine will do everything possible to hold off Slavyansk and Kramatorsk, but it might require more than just defend the towns, eg push towards Kupiansk or Izium from Kharkiv direction to cut off Russian supplies.

I agree as concerns work on Russian supply lines first. But western artillery might do the job, see those red crosses (FIRMS) along the Belgorod-Vovchansk railway line. Or this message that just came in:

I do not believe that russia can keep this up long enough to take those two citys. The losses concerning hard ware went up pretty badly in the last weeks and i surrounding kramatorks like lysyschanks is very far away. I would bet my money on it being the nnew kiew.

A broader successfull counteroffensive will need way more weapons, than there are in ukraine right now. You have to factor in, that russia will switch to a defensive stance, when that happens, which will make things way harder for ukraine. Not befor western tanks arrive at the front line.

True. Russia claims to have destroyed 2 HIMARS systems and provided footage of this. Ukraine has received only 4 systems officially. It’s attrition warfare, so they need large numbers of HIMARS systems and large amounts of munitions if they are to make a difference on the battlefield.

Last edited 6 months ago by ConcernedFllwr
1
0

They’re already making a significant impact on the battlefield and there is no proof and no reason to believe Russia’s claims that they knocked out two launchers. Consider that Ukraine likely wouldn’t deny if it was true. They’d be louder than the Russians on it. “We need more launchers!”

only because they are russian claims doesn’t mean that they are wrong tho… But without footage proof it’s hard to confirm. there are some videos that claim to be the proof, but i honestly can’t see very much in them cuz they are very blurry