Ukrainian forces retreated from a town near Lysychansk as Russian forces are advancing in the vicinity of the nearby power plant. Russian troops are also trying to cut off Ukrainian troops at Novoluhanske and breakthrough the lines towards Slovyansk.

Ukrainian forces shelled heavily Zmiinyi Island and forced Russia to withdraw its troops from the island. In the afternoon, Russian airforce bombed the island to in order to destroy the abandoned equipment left behind.

Other frontlines remain without any change. I recommend to pay attention to cross marks indicating fire/shelling.

I apologize for partly missing roads’ data. There was some issue with the visualization, and I was unable to resolve it in given time. I believe it’s still worth it to publish the maps and summary, despite the issue. 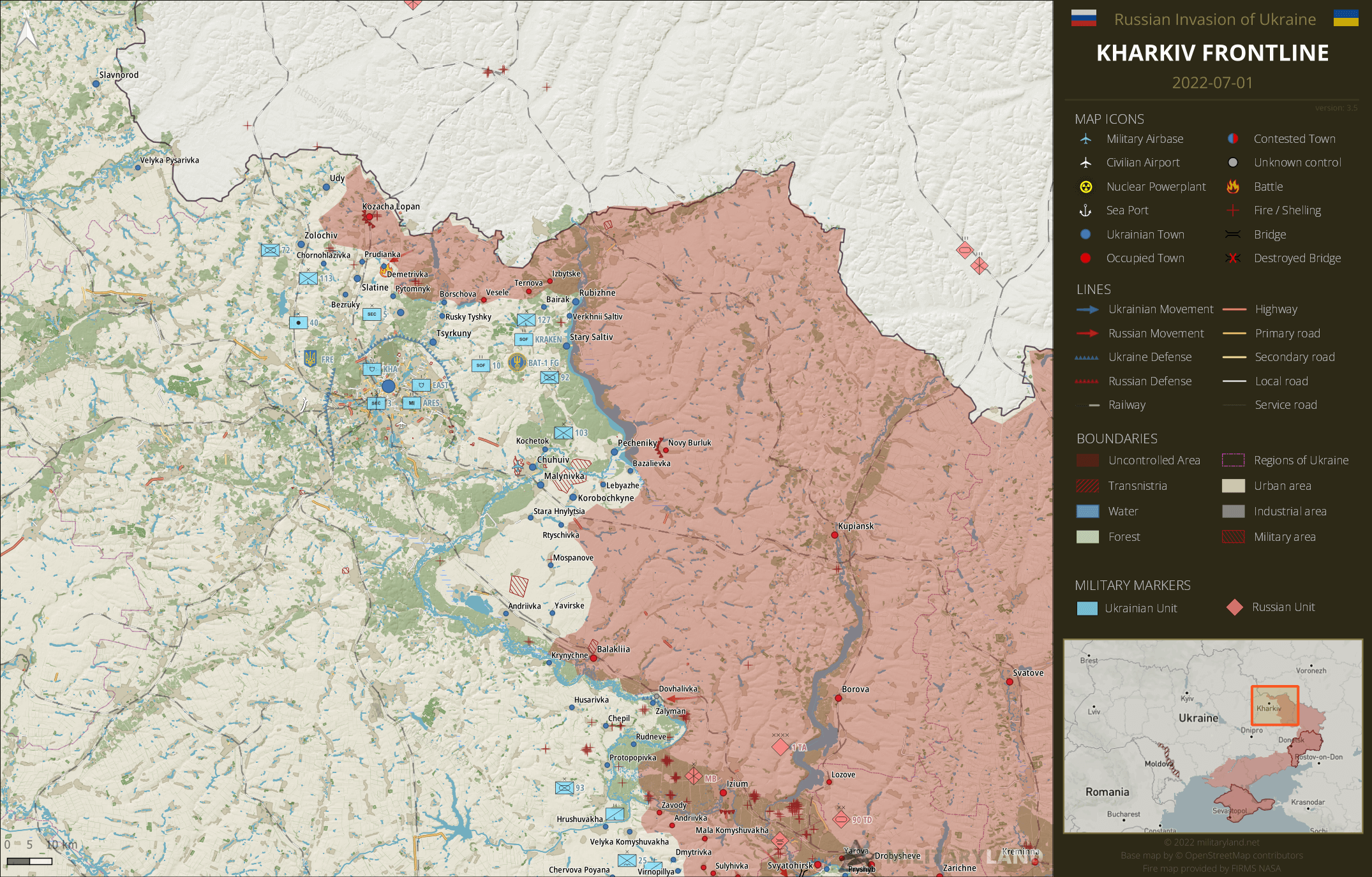 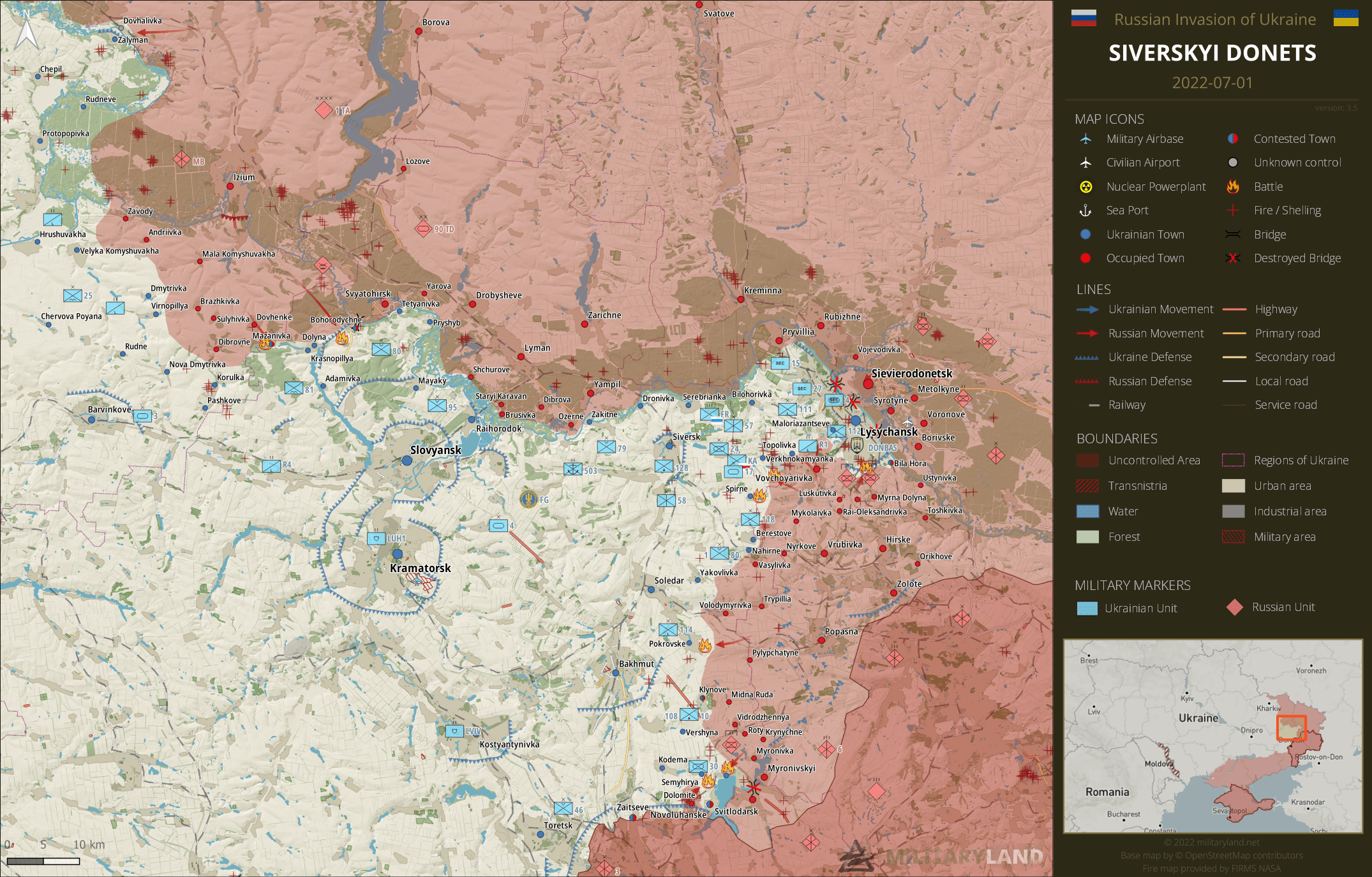 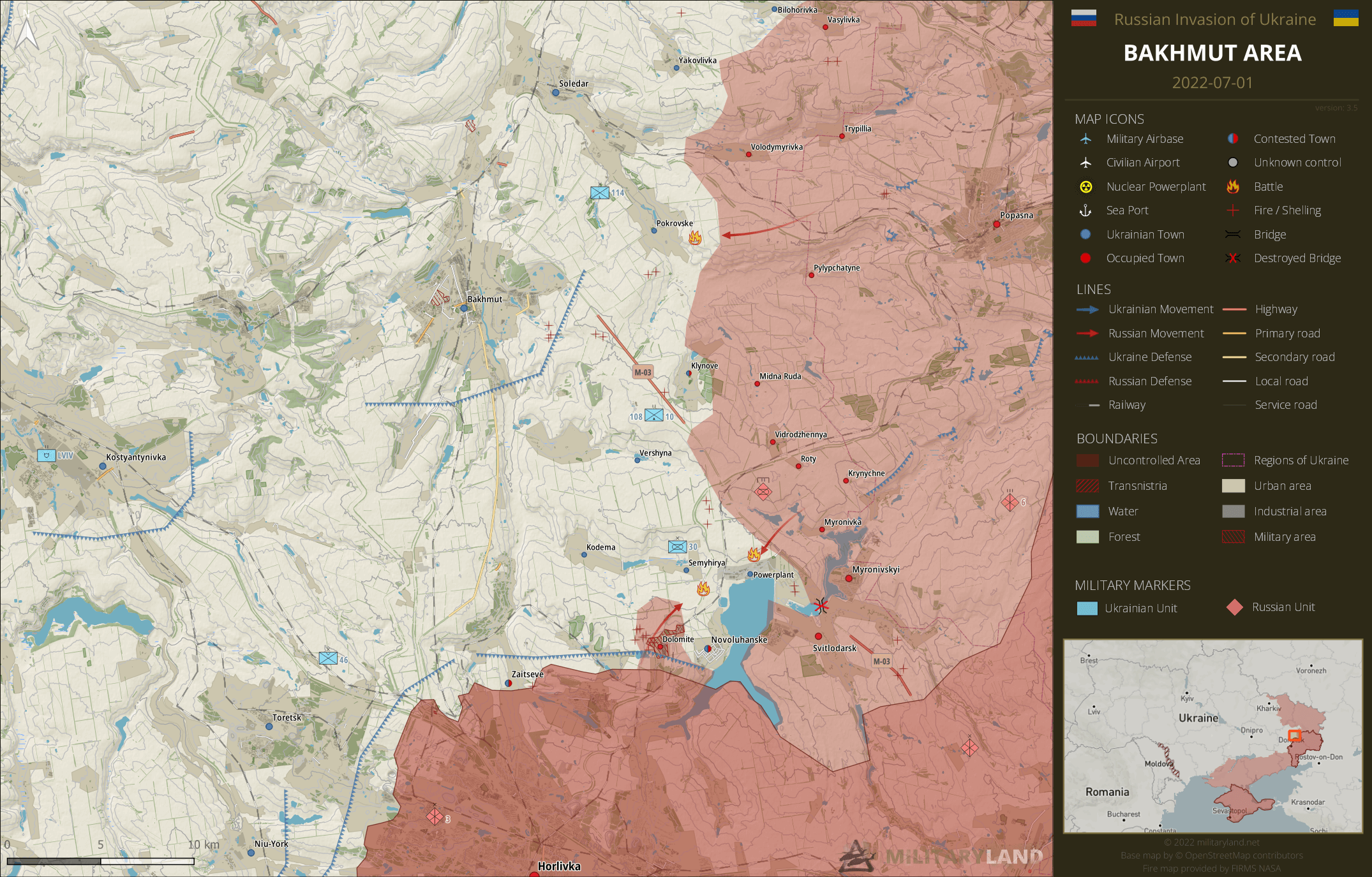 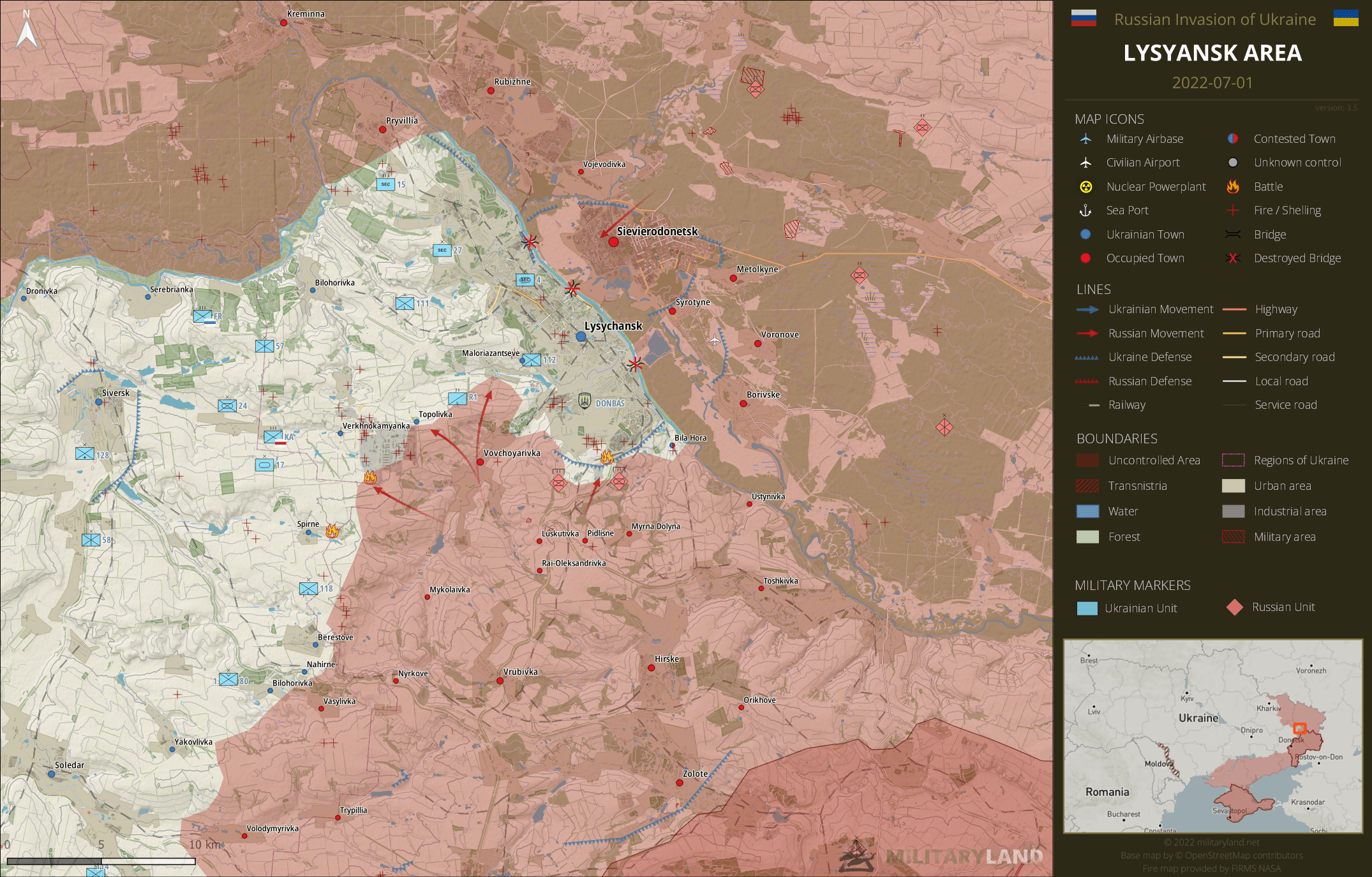 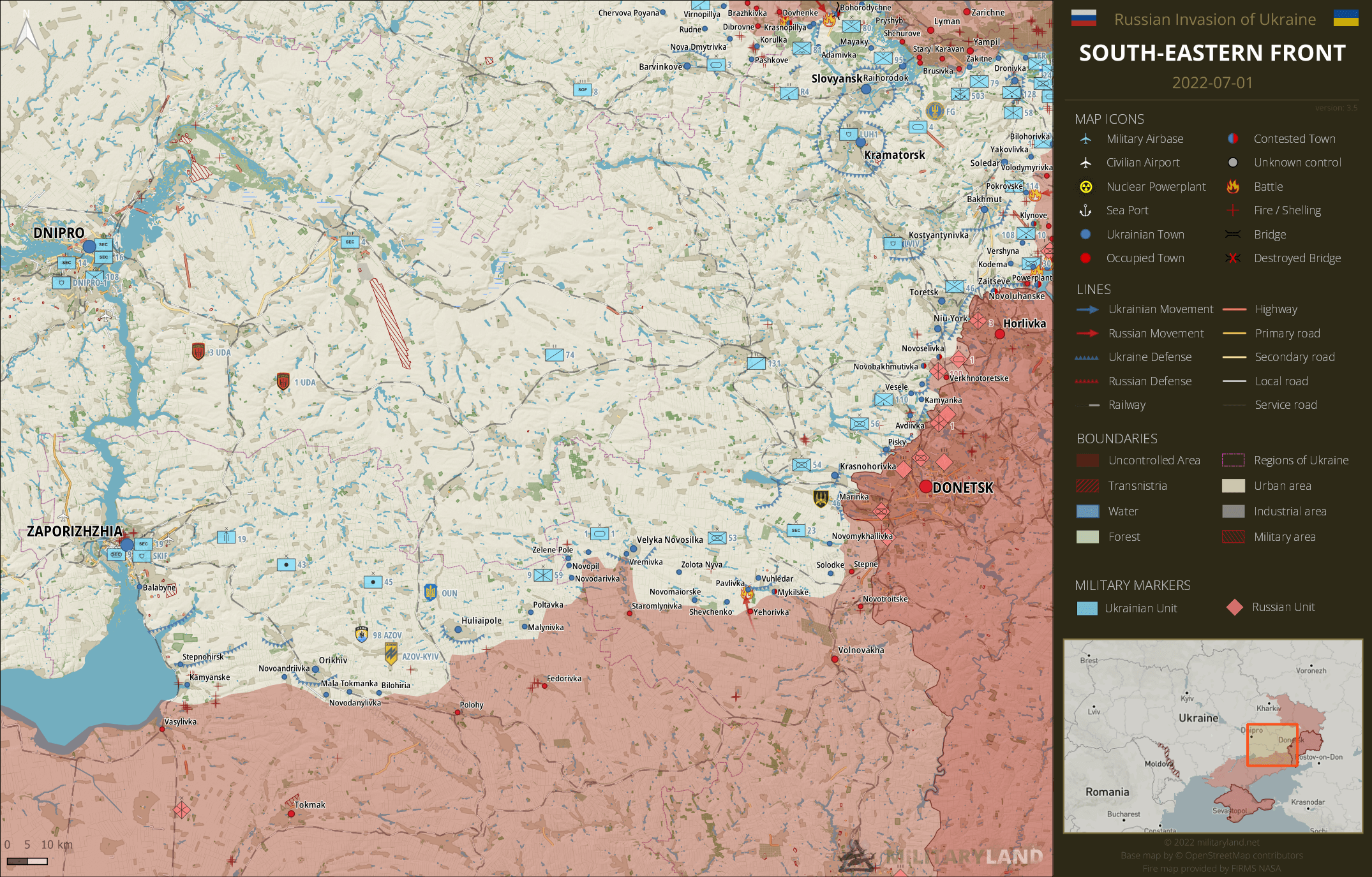 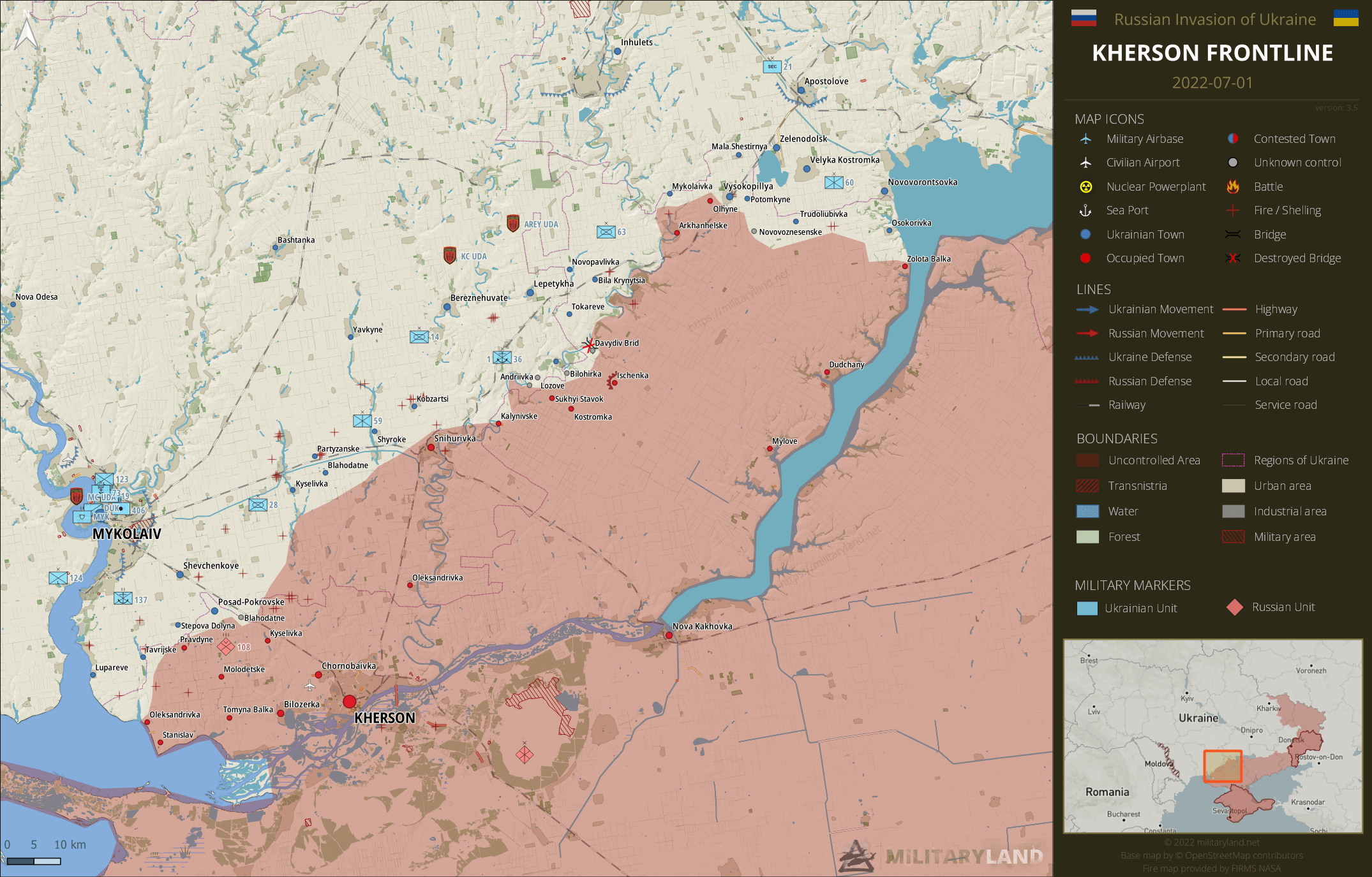 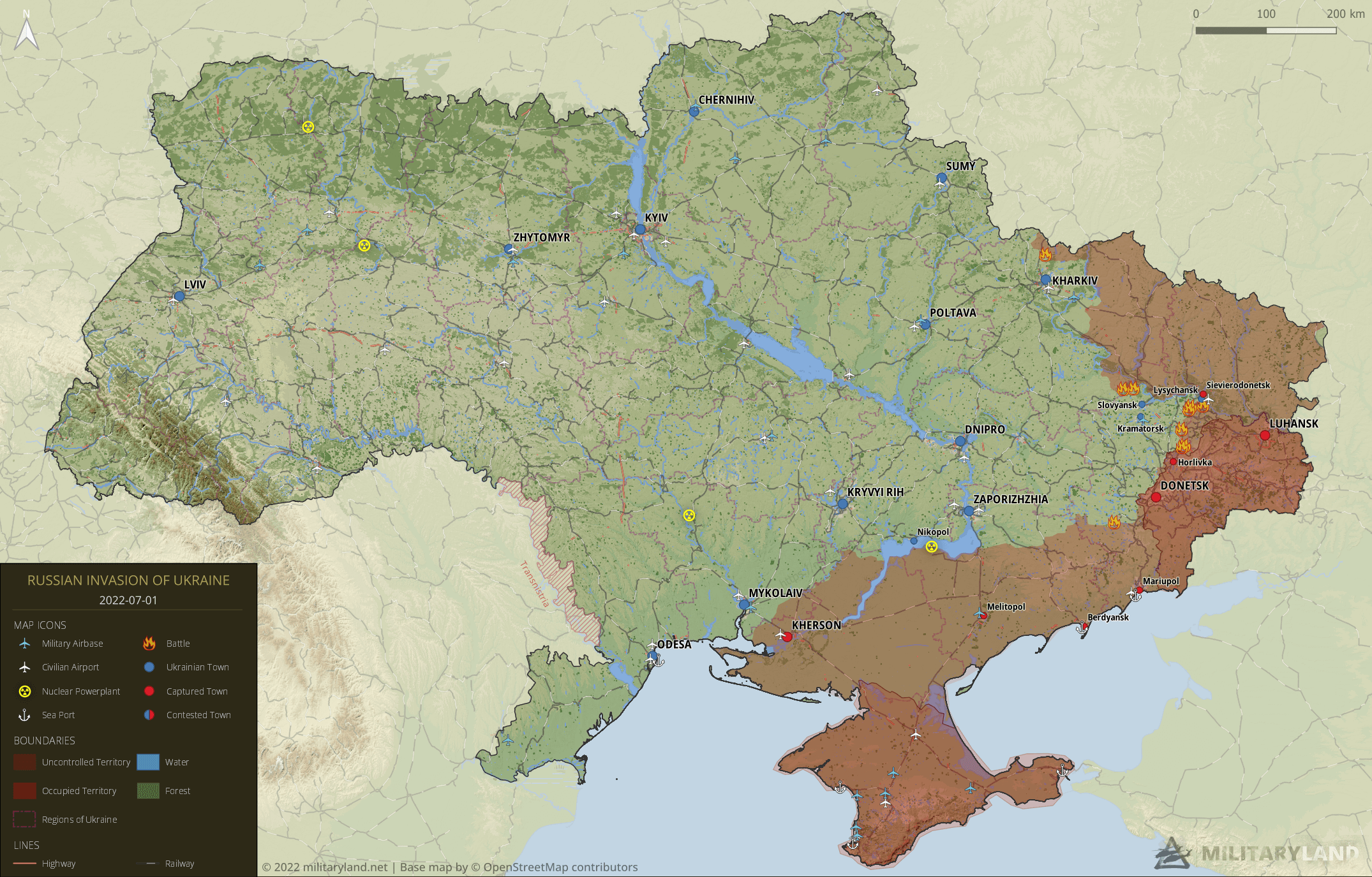 The main concern now is whether the Ukrainian troops from Lysychansk can withdraw smoothly .

anyway you deserved it for your good summarys, enjoy your break!!

Crypto-mobilization of economy and industry due massive logistical issues: https://understandingwar.org/backgrounder/russian-offensive-campaign-assessment-july-1 Which is fine, Russia couldn’t even make more than 250 tanks before the war. They’ve lost about 1582 tanks and are still losing about 210 a month. For fighter jets they used to make about 50 a year, and they’ve lost over 200 so far. Even if they can get their military production back to what it was, and eventually a bit higher, they’re running… Read more »

How did the russians cross the Siverts River at Pryvilla, without bridges and without being bombed by UA? Do you have details? That’s a significant strategic loss for UA in the Donbass battle…

Hi Jerome, I know you are about to take a break…but, here is some breaking news on the Kherson Frontline. Alot of Ukrainian activity covered. Please look at this rather long thread on Twitter: https://twitter.com/NLwartracker/status/1542986980266500101

I am curious about the situation in Pavlivka (South-Eastern front). What is the magnitute of fighting, is it just a local thing that the the UA pushed forward a little or is it a part of something. It is also interesting the RA has been trying (and failing) to recapture the town for some time now.

I really look forwards to the day the Ukrainians have parity, because we know in direct combat, lighter Ukrainian infantry defeats Russian infantry hardened with more armored and mechanized elements (though this is changing as Russia is using older equipment and Ukraine more western equipment), because their morale is very high, while the Russian one is very low, despite what the major Ruscist and Ruscom contingent here might try to give the impression of (as… Read more »

TL;DR to my long effort post: it’s about logistics, not a couple of small, burned out towns in Luhansk: (that is being reviewed coz I posted it right after this new day come around), about Russians using up Belarusian munitions https://www.ukrinform.net/rubric-ato/3515934-belarus-sends-about-20-railcars-with-ammunition-to-russia-general-staff.html(https://twitter.com/MotolkoHelp/status/1540354447163146240), and the wonderful rise in ammunition dumps and command posts blowing up recently https://edition.cnn.com/europe/live-news/russia-ukraine-war-news-07-01-22/index.html “Ukraine having success using rocket launch system to hit Russian command posts, US defense official saysFrom CNN’s Oren Liebermann As… Read more »

It’ll be interesting to see how Putin reacts when he starts getting close to 2014 borders. I don’t expect he’ll freak out before he starts seeing that it is happening. Until then he’ll rattle nukes without there being some seriousness to it. When it starts to look like the gains will be nil, Putin will actually start to fear for his life and become dangerous and unpredictable. Of course, when that time comes it’s our… Read more »

These 2 got overlapped, but then not overlapping them seems to get the post reviewed, so I’m shortening the URLs:
This Twitter post is very high quality and comes with photographic evidence from the opposition in Belarus: twitter.com/MotolkoHelp/status/1540354447163146240
Also a good source:
ukrinform.net/rubric-ato/3515934-belarus-sends-about-20-railcars-with-ammunition-to-russia-general-staff.html

A lot of wishful thinking.

But, i hope that Ukraine will finally fight for its freedom and independence.

Russians have reportedly left Ivanivka village west of Vysokopillya and north of Archangelsk in Kherson district: https://liveuamap.com/en/2022/2-july-russian-troops-left-ivanivka-village-in-kherson-region
Result from the ammo depot explosion nearby recently?

I have seen visual confirmation through drone footage of the Lysychansk oil refinery being captured as there were Russian troops on its northern part. Maybe they have not yet fully cleared the plant but they have pretty much taken it certainly.