Russian forces approached Lysychansk refinery and threatening to cut the last road connecting Lysychansk with Siversk/Bakhmut. The situation for defenders becoming critical, and we might soon see Ukrainian retreat from Lysychansk to avoid encirclement. Lysychansk is the last Ukraine-controlled town in Luhansk Oblast.

Ukrainian troops continue to hold the line in the south and south-eastern and successfully repelling one Russian attack after another. Furthermore, they liberated another settlement north of Kherson. 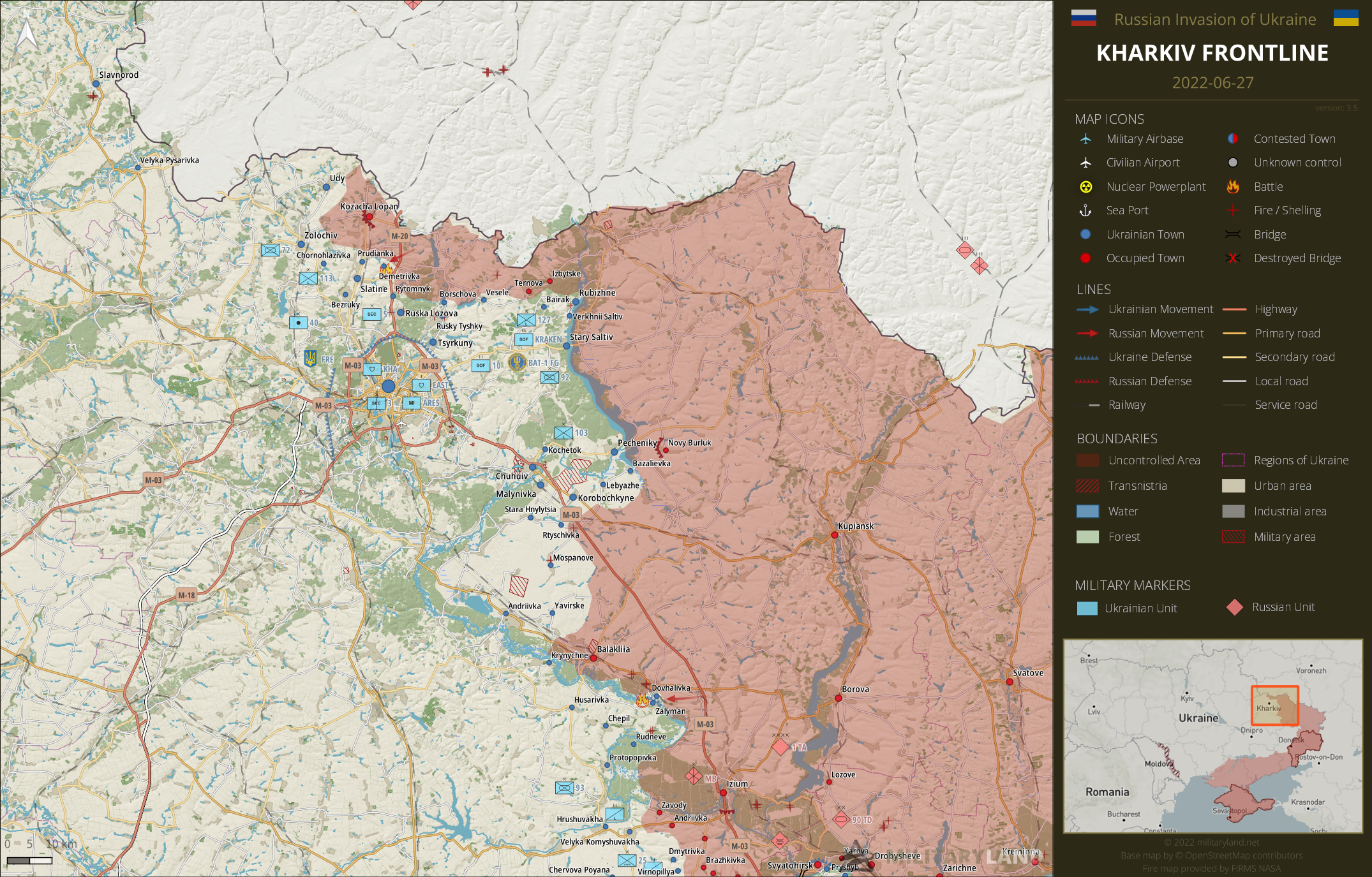 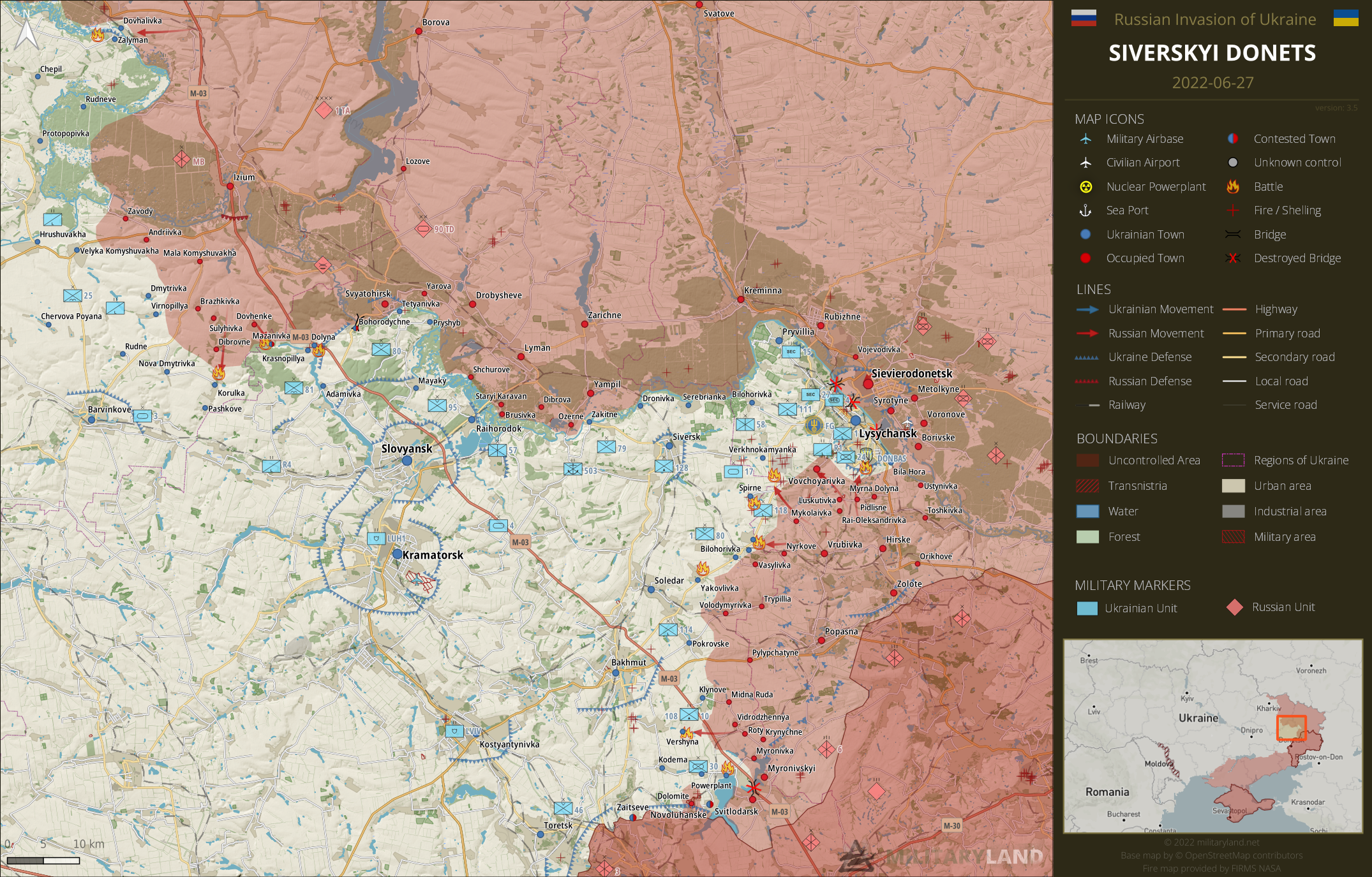 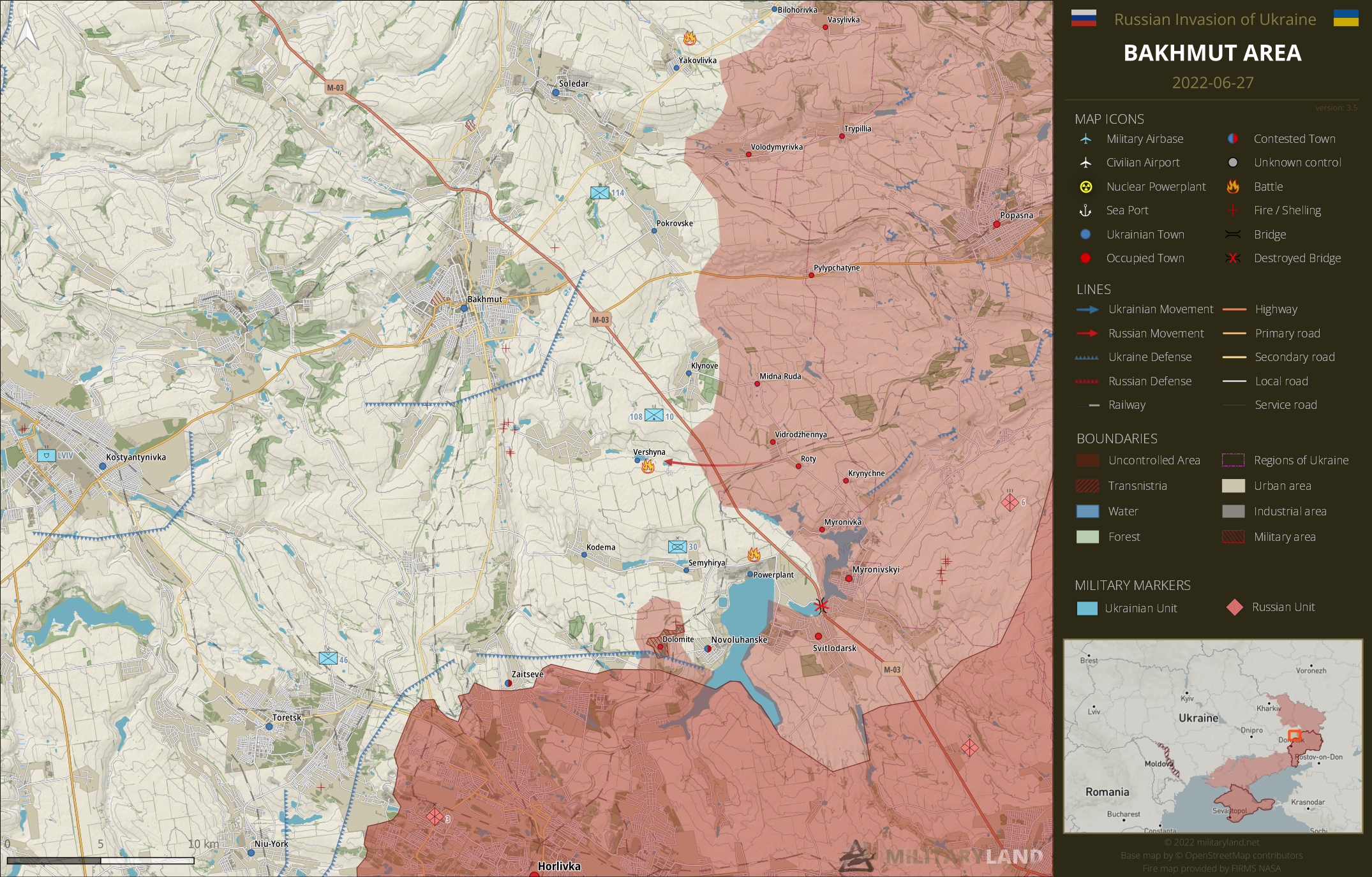 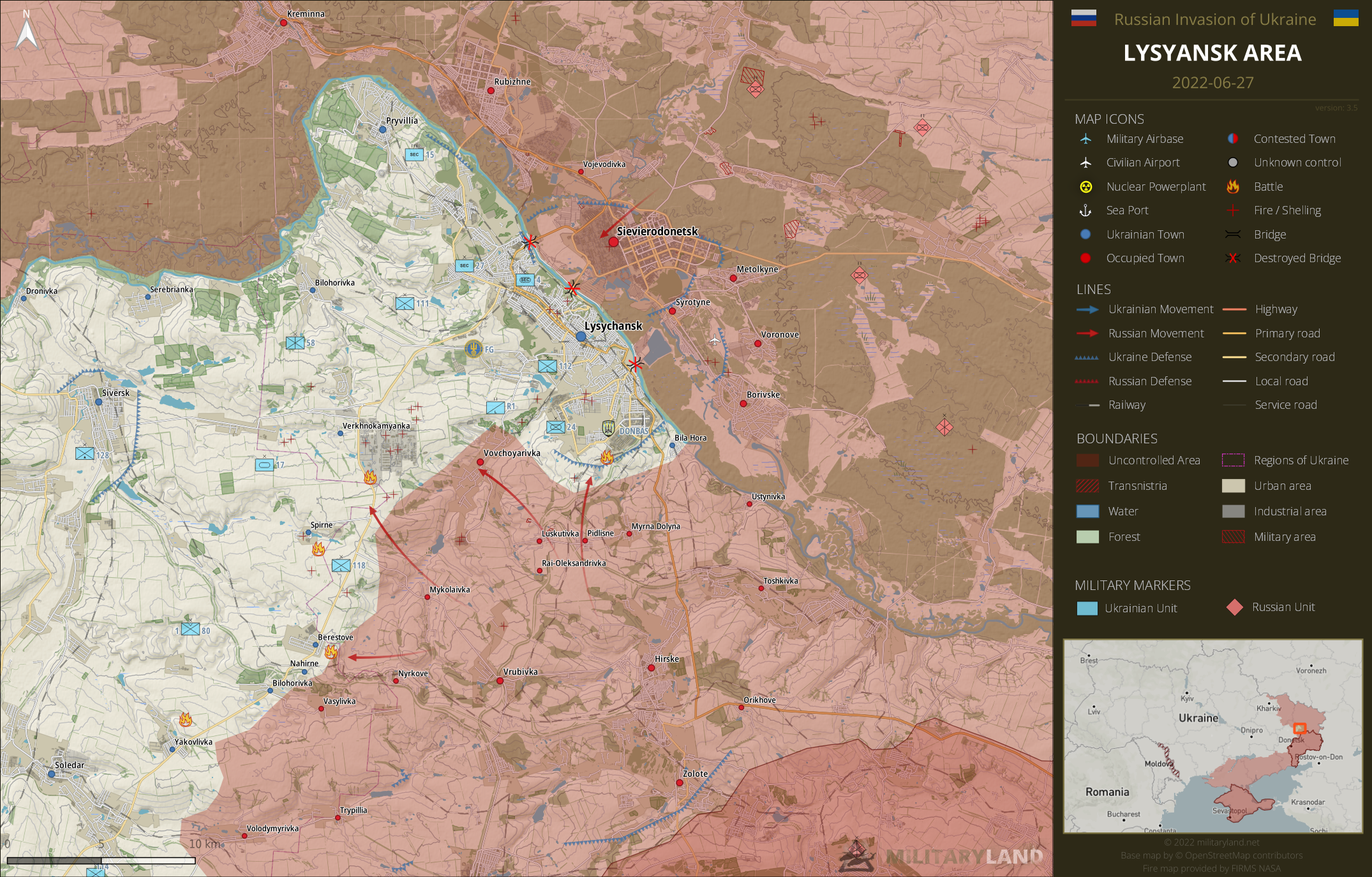 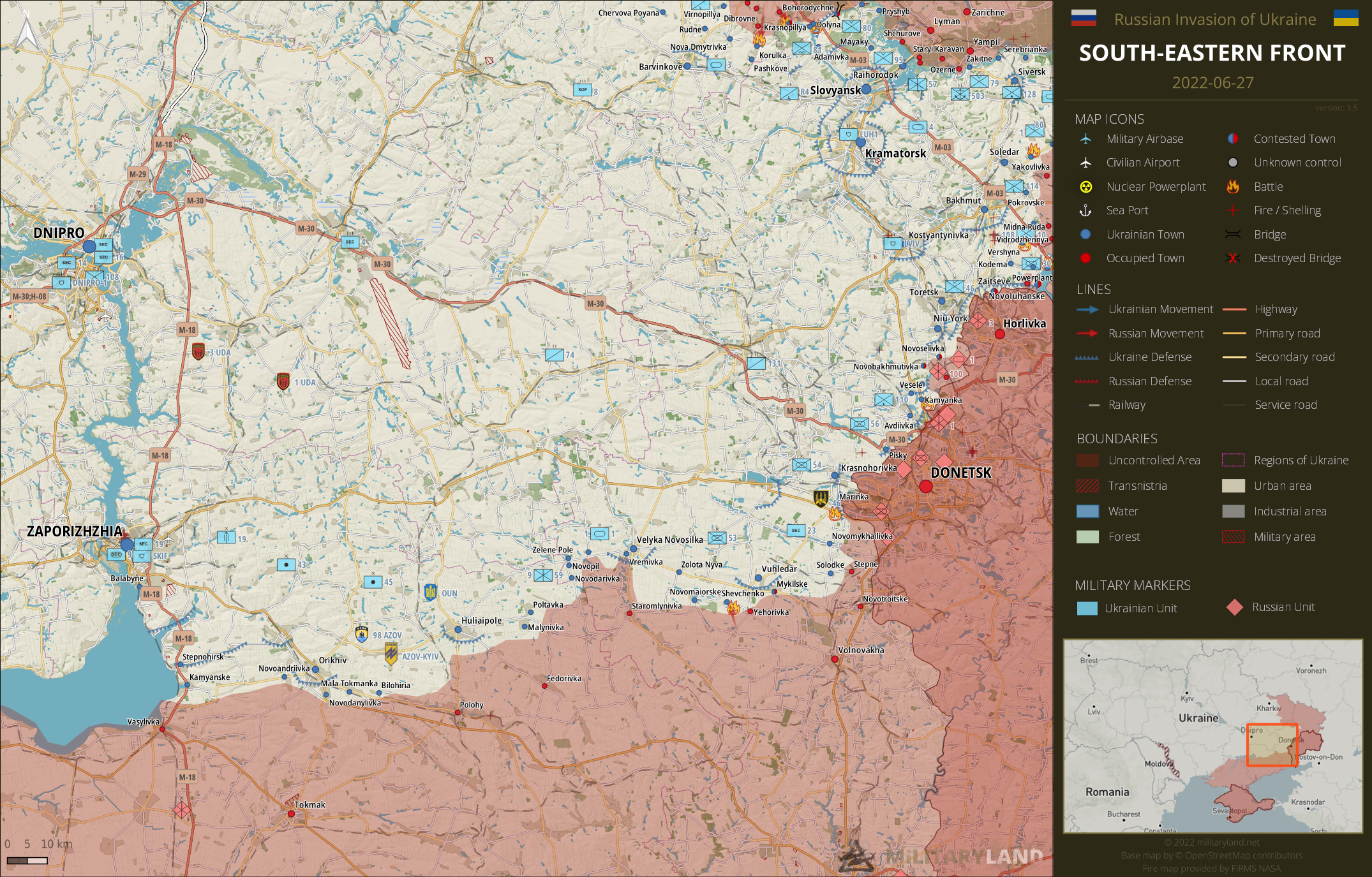 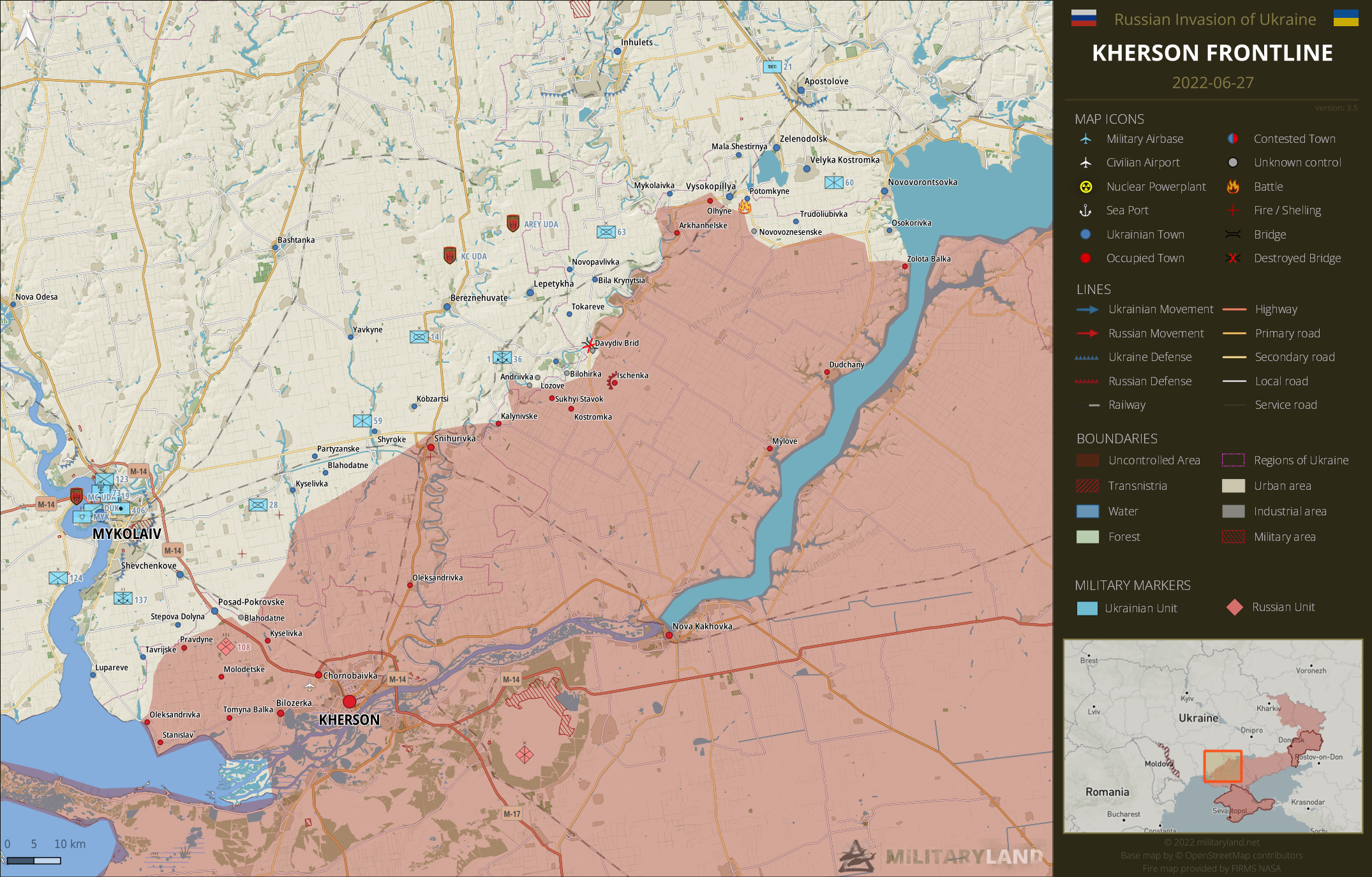 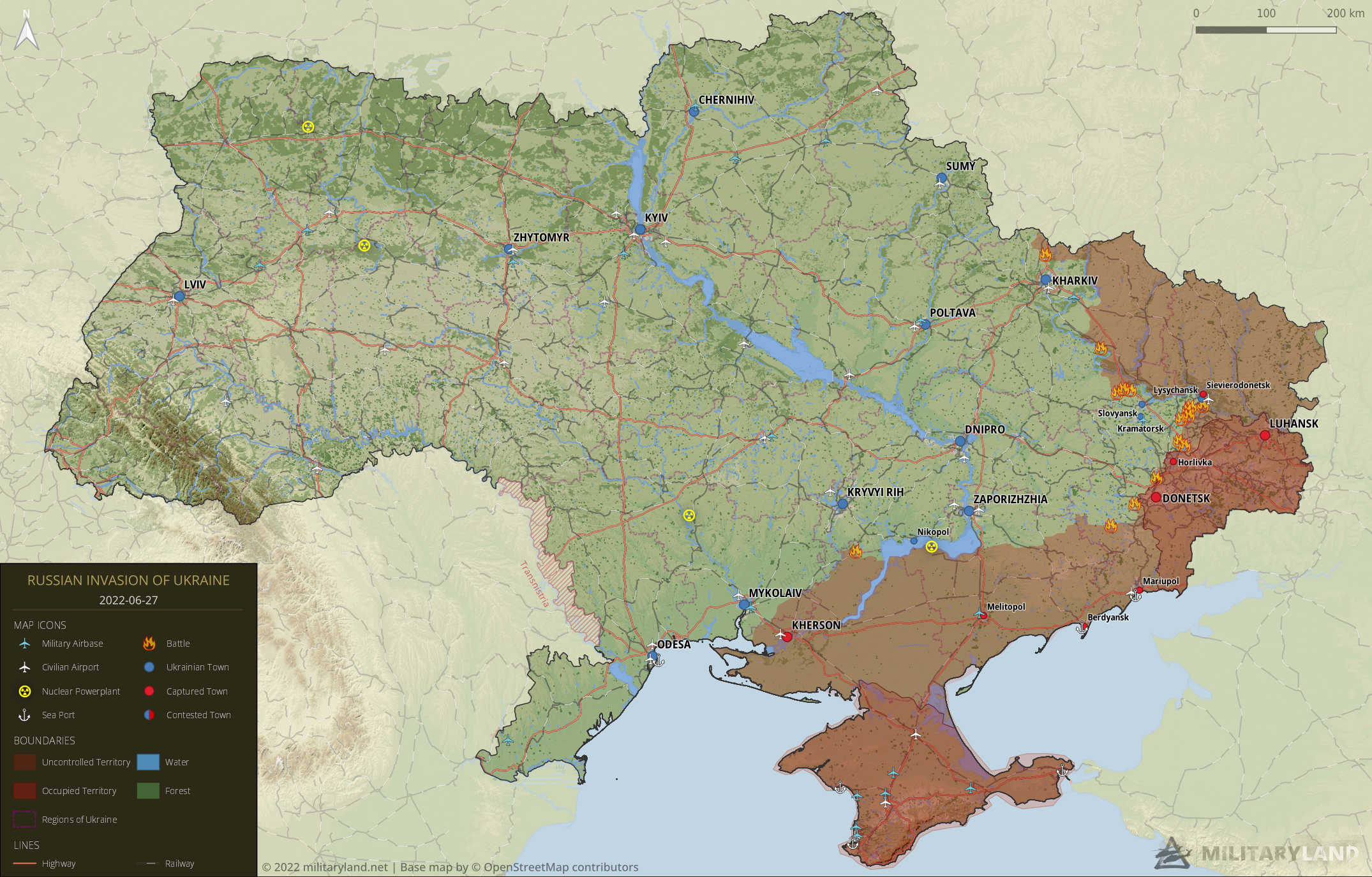 Ukraine is getting the NASAMS missile defense system with 100 mile range and 9 mile max altitude:
https://www.youtube.com/watch?v=Ffg4K6-bk7Y

For a long time I’ve believed the Russian offensive in the east will have hit its high water mark if it makes it to the combined bastions of Slovyansk and Kramatorsk. The Ukrainians are still building their army behind the lines and they’re likely planning their own offensive for the end of the summer. And Russia is still trying to make it that far at incredible cost to their own forces. Looking at Lysychansk still… Read more »

People should watch timelaps of frontline évolution and remember the top of russian conquest was Day 23 (or around).

People just keep moving goalposts for them in order to claim the Russians are “winning.” It gets pretty silly. They’ve failed massively in their goals. The fact that their huge army, unleashed in Ukraine, has been able to do a lot of damage and inflict a lot of pain shoudln’t be a surprise. But to just look at that and conclude they’re doing what they need to actually win the war is myopic to the… Read more »

Where can I see the time lapse?

Sorry, i doesnt have the link.

You’re making a lot of assumptions there, “building their army behind the lines”, “likely planning their offensive” while underestimating Russian chances… They HAVE captured Mariupol and HAVE got Severodonetsk in their entirety. That is not TRYING, that is DOING. Russian losses aren’t really that big, they’ve only lost under 40,000 soldiers tops out of 200,000 and a few thousand pieces of equipment. They have tens of thousands in storage.

Obviously you have little to no idea what war is. 40k lost soldiers it means around 100k wounded and missing in action. Also, under any standards loosing more than 20% of an army means defeat, heavy defeat. Do you even know what political, strategic and tactical objective means? Tactically Russia is currently winning as some unimportant cities have fallen but strategically and politically Russia has already lost and nothing will change it.

It’s pretty clear that the original invasion force has been defeated. Putin relies now on digging deeper into reserves, new conscripts, and outdated equipment to try to keep up with losses. He also tries to keep up the appearance of invincibility with costly, inefficient missile strikes on “soft” targets. Terror attacks, essentially. Of course Russia is still producing war materiel. But every expert I’ve seen that gets into it claims it falls far short of… Read more »

Shipment of NATO weapons yes, but you should factor in that a sizeable percentage is probably destroyed, taken by the Russians or simply ineffective. Let’s be realistic.

Taken by russian ? Where ? Russian opportunity to capture ukr material are very limited since 2 month (and for ukr, its the same)

Be realistic. Otan delivery are only beginning. Otan country have massiv stock for help ukrain.

I think 40k is the number of ua official. This number include all the soldier out of fight. Not only the death.

Last edited 7 months ago by dolgan
1
0

two countries that are outside the European Union and NATO have a war … why does Europe intervene and shoot its feet, but also NATO in this war?

Yup, sure seems like the plant, only 300m away from the Amstor shopping, was the target: https://kredmash.com/ua You can see on one of the sites images the little dome in the garden lake, opposite to the shopping center.
https://pbs.twimg.com/media/FWR3J–WIAILXh1.jpg

AFAIK the first missile hit something near(<50 meters) Amstor and behind the wall was Comfy store. That's why the most of victims from there and people from opposite side of Amstor were able to leave the building before it burned down. Of course, I can be wrong..

I’m wondering what is Russia’s current goal right now – is it still Novorossiya, or are they looking for more progress towards a split in half scenario (Kharkiv to Odessa) or landlocked (current situation + Odessa). Seems like that without external involvement (meaning WW3) Ukraine can’t hold out much longer, especially if Belarus joins at some point putting pressure from the north and dividing the scarce Ukrainian military resources even further. Unfortunately, I’m guessing a… Read more »

Russia use Bélarus stock. For repair their own soviet material and for the munition.

If Bélarus plan to take active part in this war, its a strange strategy to desarm Bélarus.

I am certain if we work out on what the Russian plan of action is, the Kremlin would like to know too. As it stands, the goal seems to be the capture of the Luhansk oblast, after that it will probably move into capturing the Donetsk territory. Will it happen we don’t know, but considering the state of the RAF, I have serious doubts, on top of the abysmal economic situation. Ако трябва да съм… Read more »

I’m kind of tired of the WW3 rethoric. As if a war involving Russia and some other major power entails a world war. It feels like risk avoiding excuses from the west and grandiosity desire from Russia. I do not see a quick path to WW3 if for instant Poland would sent troops to Ukraine. I can understand that Belarus might join, Putin maybe wants to open up a front in the Baltics which draws… Read more »

So first of all I would like to see how Russia wins against Ukraine and Poland – not particularly likely. And no, even if NATO intervene, it doesn’t have to be the nuclear holocaust. Conventionally, NATO (mainly the USA) would easily win. when their campaign of conquest is not working, why should Russia start a nuclear war? its stupid…. We Europeans should do everything we can to support Ukraine anyway in order to win this… Read more »

I didn’t say we shouldn’t support Ukraine, but starting a war with russia would almost certainly spiral into a nuclear war. either side is going to use nukes if they are the losing side. russia wouldn’t win a war against NATO by it’s own, but they could end the world if they are losing and with an arsenal of over 6000 nukes (that is more than NATO combined has), i don’t see how we could… Read more »

There were so many nuclear treats over the last 20yrs (and even more during Soviet Union) that nobody cares any more. Russian diplomacy is simple as wire – if something doesn’t go along with our interests then we threaten others by using nuclear weapon. How finesse, how subtlety…

Nations don’t need to listen to treaties, because there is nobody to stop them if they are choosing not to comply by them. in fact if you have nuclear weapons you don’t need to care about any treaties since nobody will attack you for breaking them.

Putin also has children and Russia will exist even if it will be on the losing side of the history after the war with Ukraine. So I don’t believe in nuclear holocaust. Russia has incredible potential to become one of the greatest country in the world without conquering and bullying anyone. Why is there such a maniacal urge to enslave other nations? What’s the point of it in XXI century?

I find Ukrainian control over Dovhalivka, between Balaklia and Izium quite significant, given that it is located N of the S. Donets river. Makes me wonder where UA troops crossed the river, and what else they may in the meantime hold on the northern bank. Add to that the fires around neighbouring Savynzi (good addition to the maps, Jerome, btw) – there might be something interesting unfolding. This should block the Russian supply line from… Read more »

They dont say they have liberate dovahlivka.

At any rate, this seems to indicate fighting south of Savyntsi. A few days ago, several Russian sources claimed the Russian army had captured Nortsyvka. I did not quite believe it. When and how would the Russians have crossed the Siversky Donets? Now that there is evidence of offensive actions in the area I am starting to wonder.

I think the missile attack on Kremenchuk was intended for the bridge and it failed to hit intended target as usual, there was a similar attack around Dinipro. That’s Russian Mir for you. peace through death and destruction, they liberate like a rape van offering free candy.

Several (pro-)russian sources say that the target was the road construction making equipment plant behind it, which is on record to have refurbished 3 BTGs in 2014, and might actually also have received some damage. True or not: Firing anti-ship missiles, known for not being very good in finding land targets, into the center of a city, on the evening before a public holiday when people are buying extra food, is beyond just being careless.… Read more »

Can you provide some links? That’s pretty likely. Russian have already hit that train station by mistake, not to mention MH-17…

They use kh22. Strategic missile not adapted for precise (with atomic bomb ,its not needed) land strike.

In this condition, massive civil casualty and very bad military efficacity is normal. They use kh22 like terror arm.

This website, while still pro Ukrainian seems less bombastic than most of the dozens out there.