Ukrainian Army withdrew from Sievierodonetsk and nearby towns across the river due to unfavorable situation south of Lysychansk. Russian forces continue to put pressure on the Ukrainian defenders south of Bakhmut and the previously mentioned Lysychansk. The enemy also entered Hirske and Zolote and met no resistance.

In the south, Ukrainian forces seem to liberate a town of Vysokopollia and forced Russian forces to retreat. 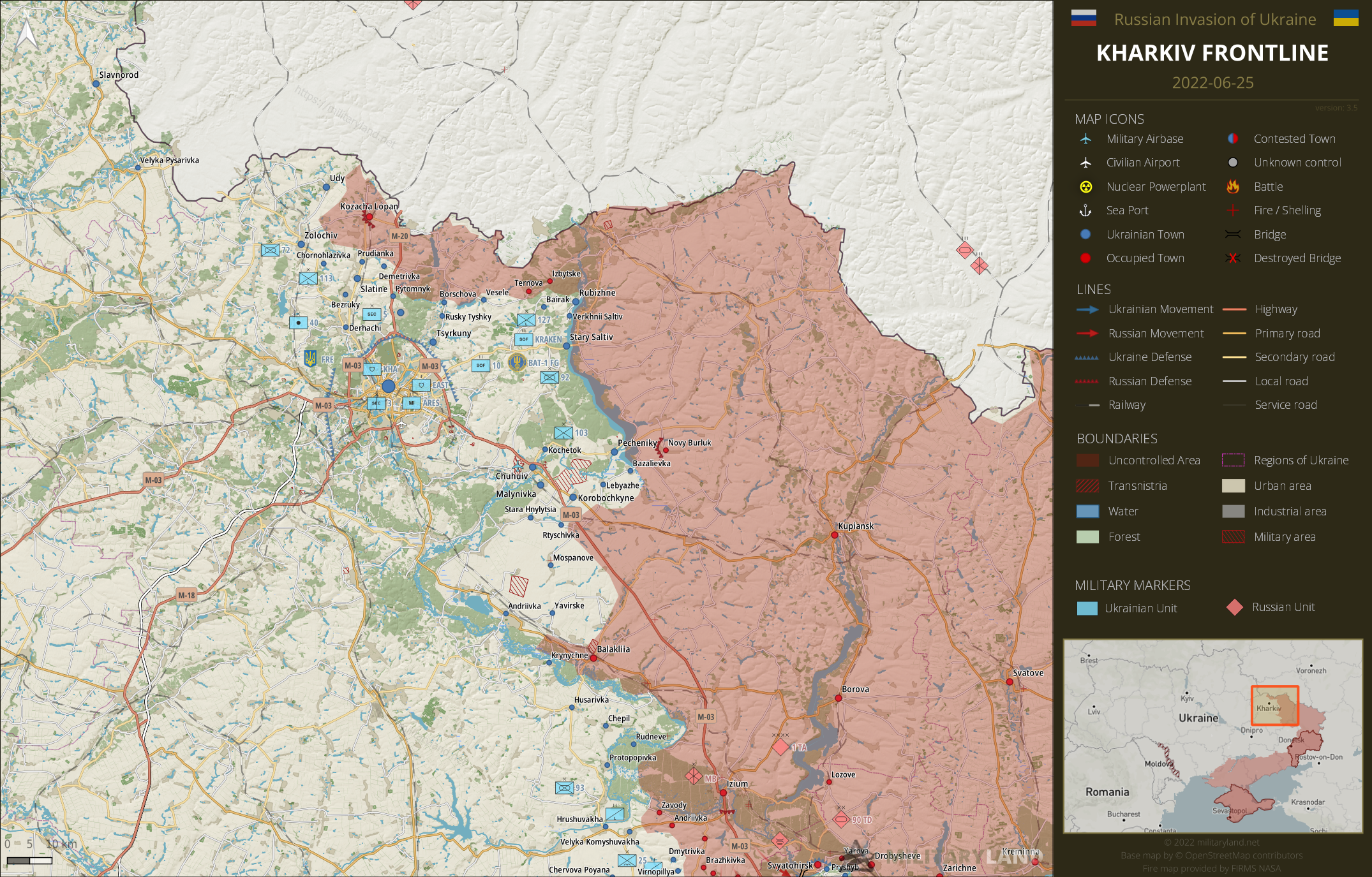 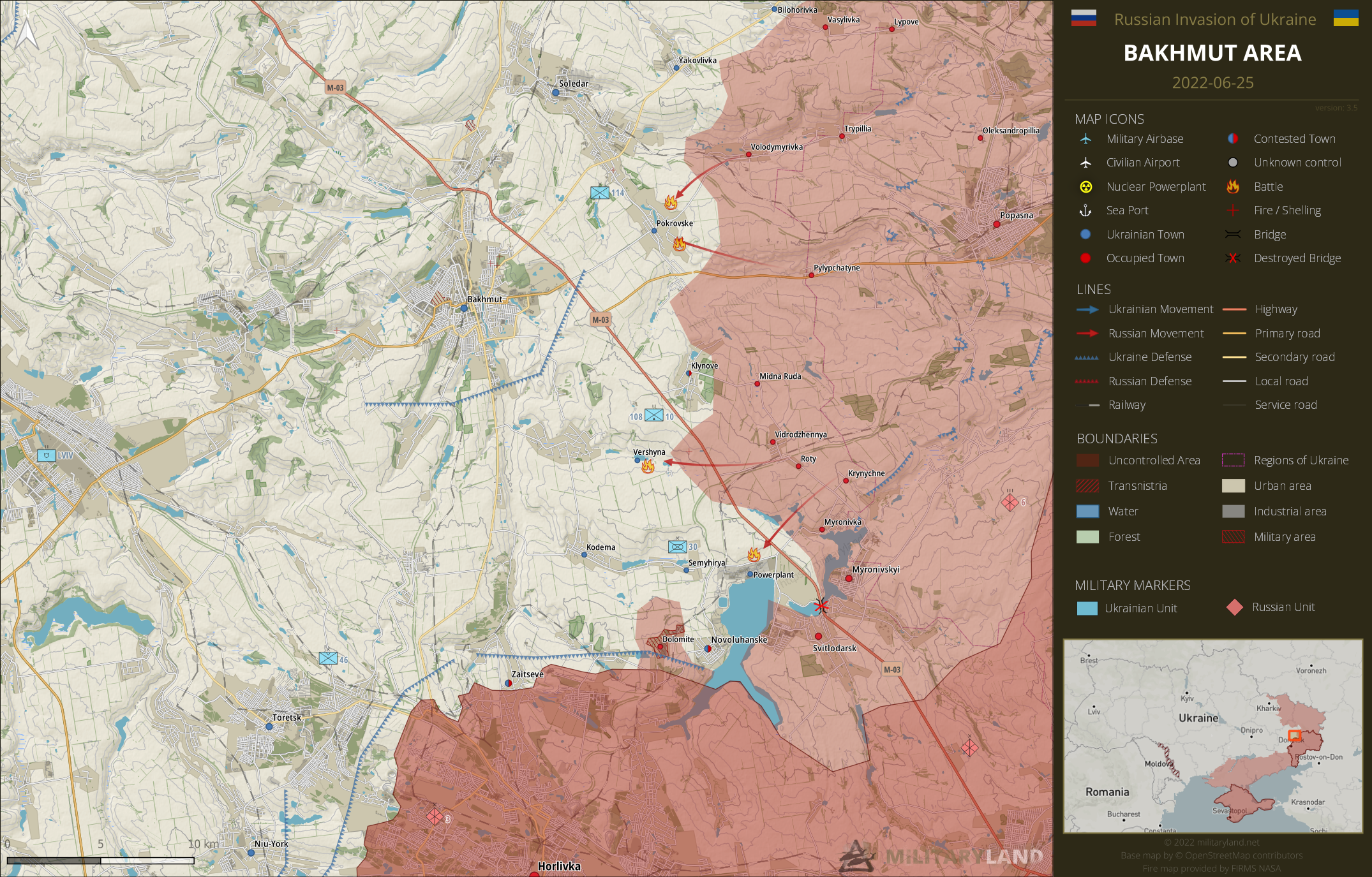 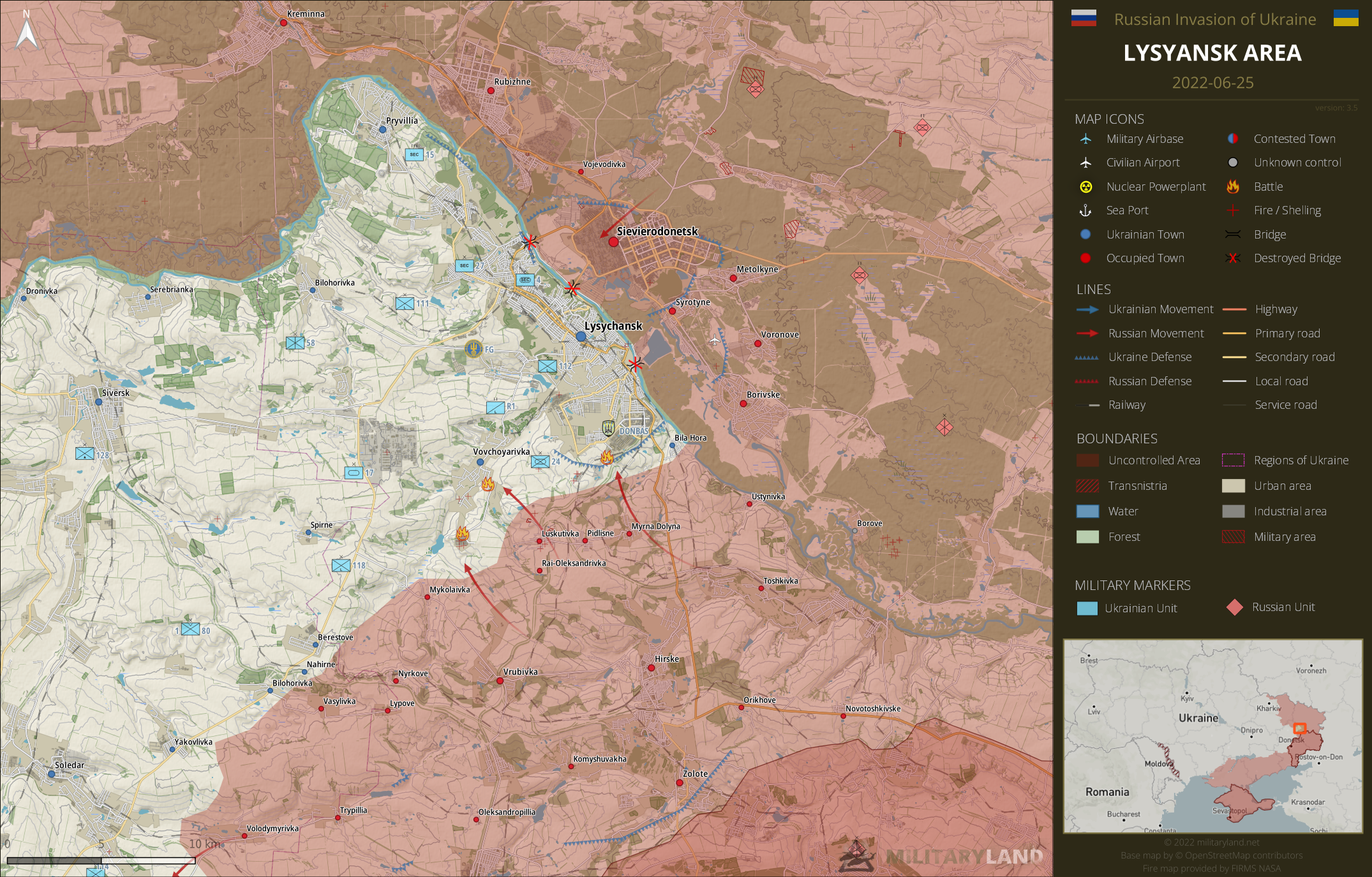 Apologies for Borove marked with gray color. I forgot to change it. 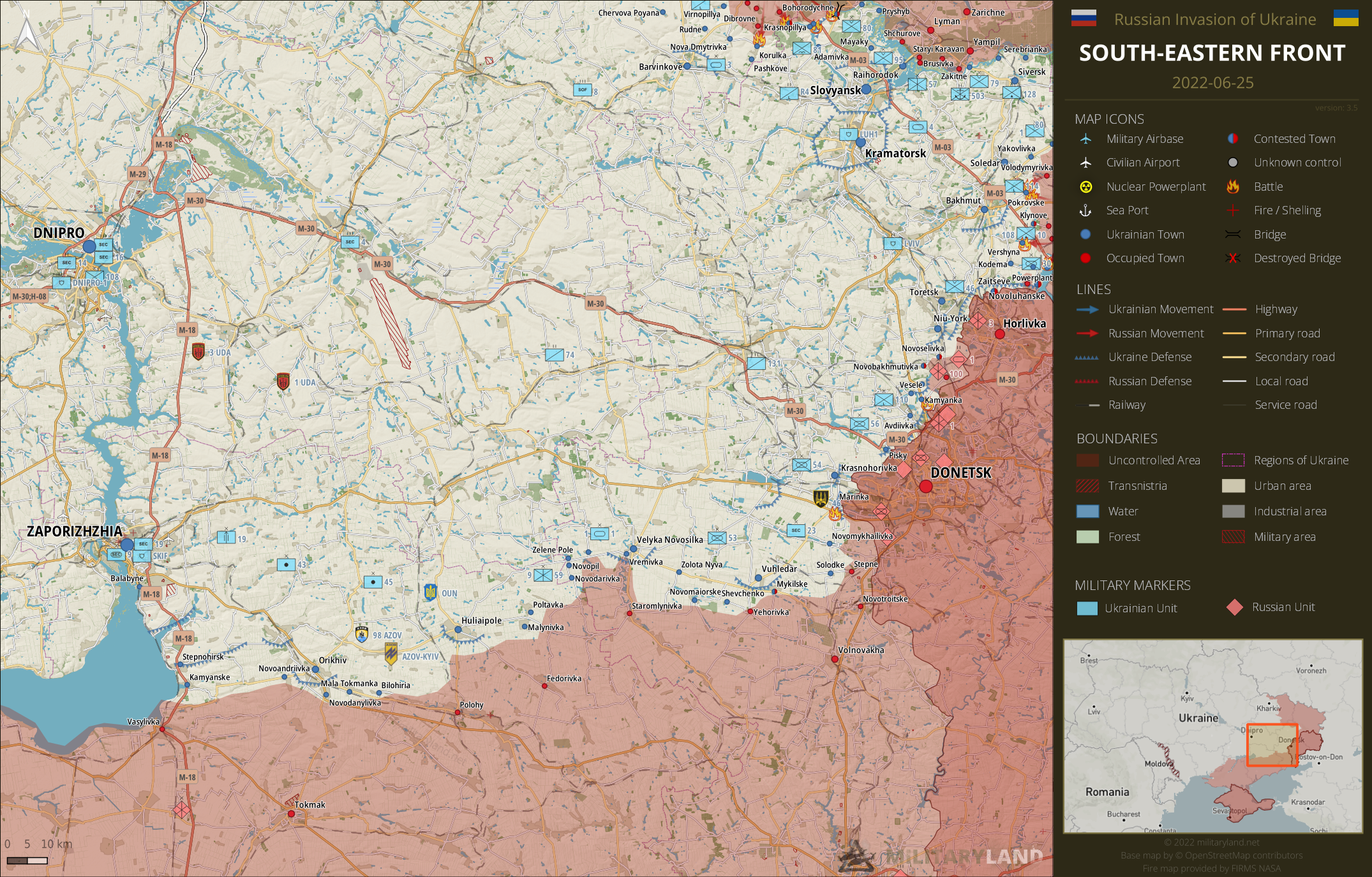 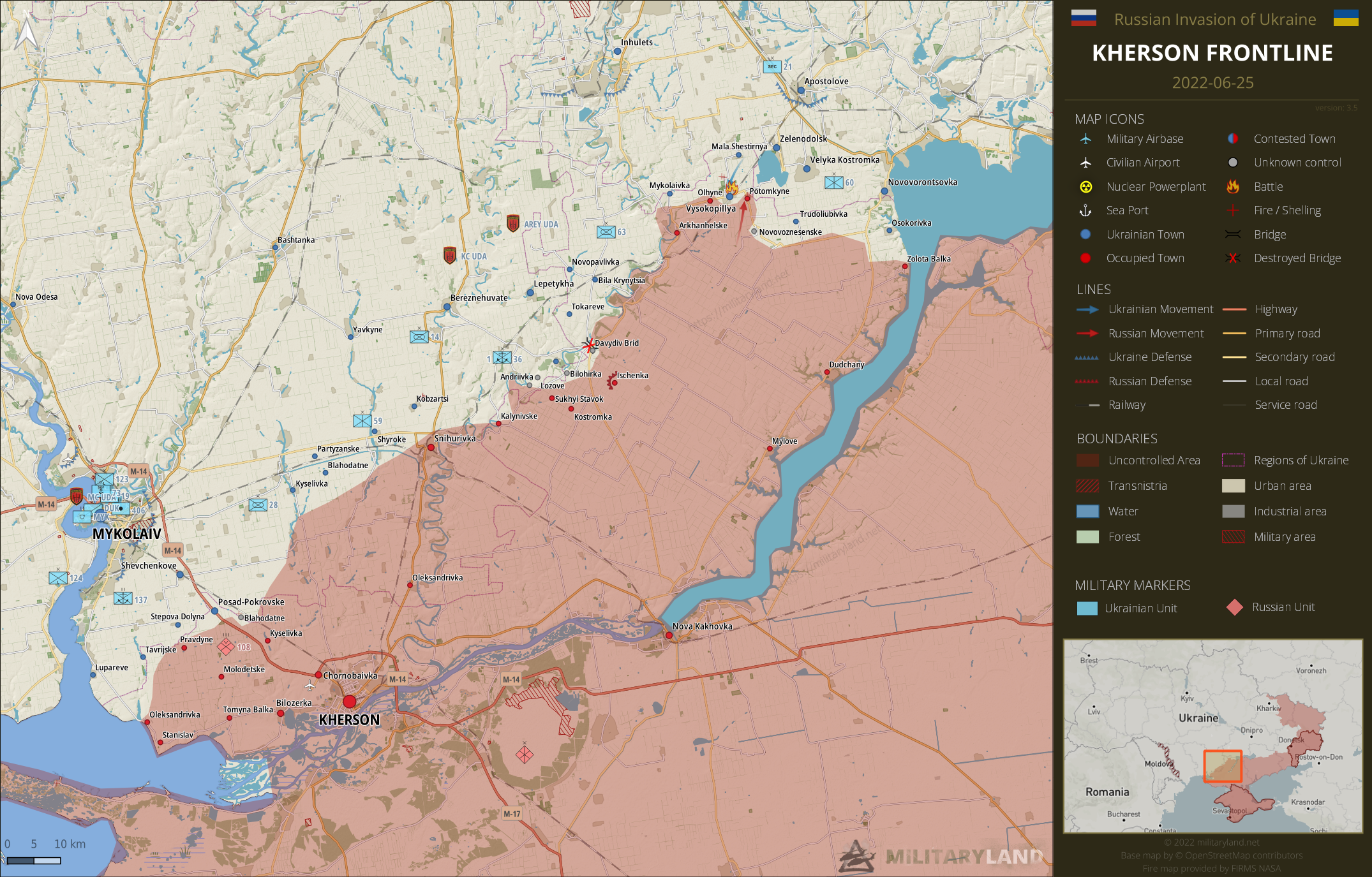 Ukrainian side announced a strict embargo on all information regarding Kherson Oblast and advance of Ukrainian troops. The only allowed source for this area are the reports by Ukrainian General Staff. I didn’t include the rumors spread by some other mapmakers (they turned out to be false again), so the reports here aren’t affected by this decision. 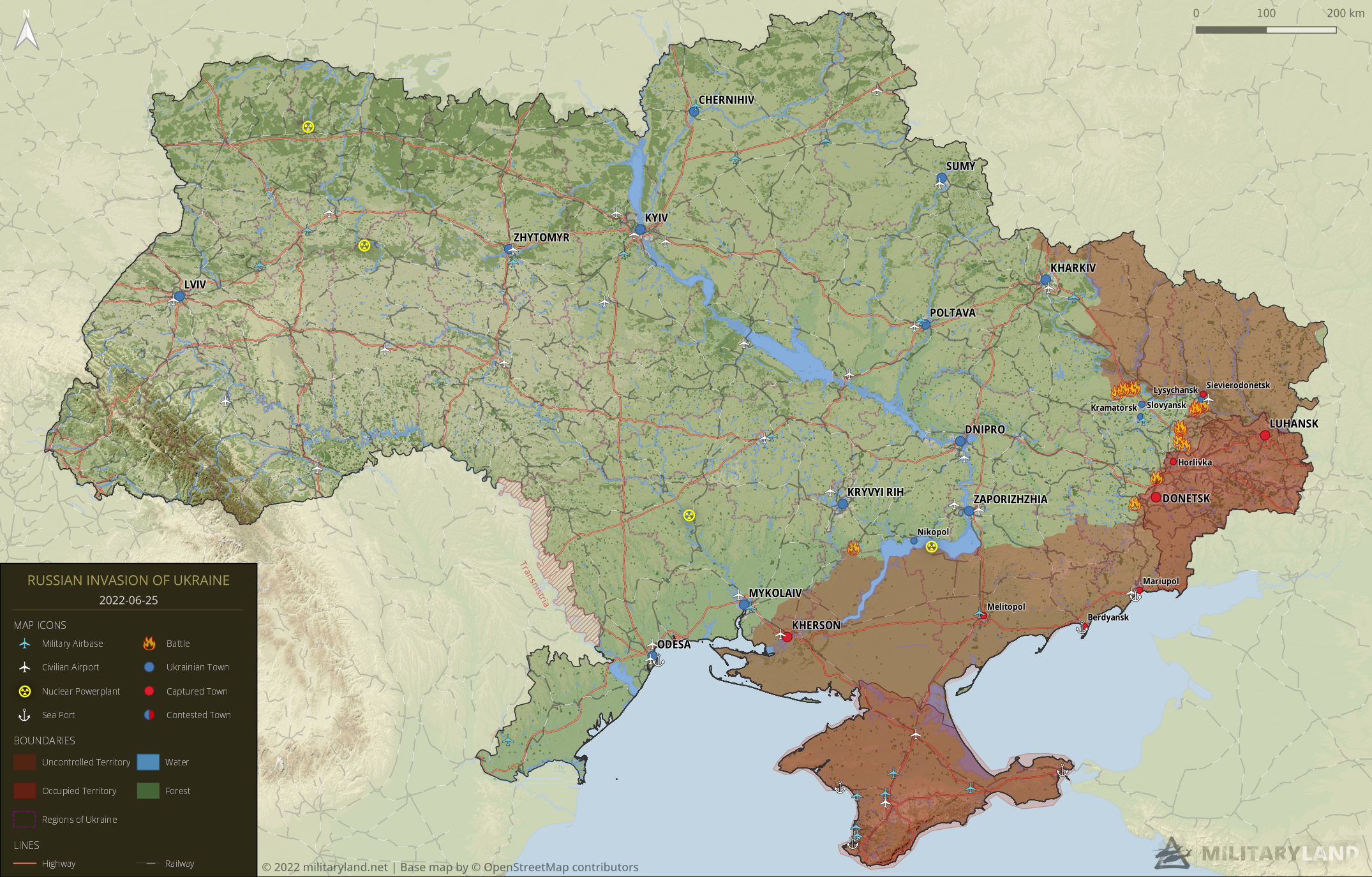 Good evening, I regularly consult your site and appreciate the objectiveness with which you describe the dynamic situation on the ground. It is far from being easy, so thank you for this. South of Izyum, your map shows Dibrovne as being controlled by the Russians. Are you sure about this? I did not see any reports in the Russia media mentioning this fact. Is there a link you could share? Thank you.

I think some source think divrone have been capture because russian élément are south to this position. But no need to capture divrone for that.

Russian shell divrone after the city was announced to be capture.

I understand and support the information blockade on the offensive. However, I do not understand zero information on the previous great counter-offensive from the Davidiv Brid area. They were about to enter Kherson, and suddenly there was silence and no information … Which counteroffensive is it in this area? 14? 16? Day after day, Arestovych or some other presidential stupid announces something that is utter nonsense, and everyone is swallowing it like pelicans. The old… Read more »

Additionally. If Ukriana even had such an amount of heavy equipment, ammunition, supplies, support, etc., wouldn't it be better to use it all for defense in the Donbas region? Where does the most important fight really take place? Just look at the map. In the Donbas, an institution is important from the economic point of view every kilometer. If not a mine, it is an open pit, if not a power plant, it is a… Read more »

Ukrainian was Never close to enter in kherson .

And probably, they will not try it before they took control of the 2 bridges.

Kherson is important. For both camp. 7 at 10 percent of russian troup are on this front.

But I know perfectly well that they are far from Kherson. I am simply irritated by this absurdly childish propaganda. Instead of saying what the realities are and that “until we receive enough heavy equipment we will not defend our homeland”, we are dealing with another counteroffensive on Twitter every few days. Only that it usually ends after a few days with an information in which we learn that “the Ukrainian army professionally has retreated… Read more »

So these are the stakes of people in charge. IMHO ponderings lead nowhere, wait and those who will be around will see and have to deal with whatever …

An objective description of events, thank you. I want to admit my mistake in the forecast about about 500 encircled and captured in Zolote-Gorsky, as well as about the imminent encirclement of Lisichansk. In fact, there are no more than 60 prisoners so far? plus some number of dead (Augusto14’s comment is correct). It seems that most of them left the encirclement in Gorskoye-Zolotoye. At the moment, it is at least stupid for the RF… Read more »

I believe it is important to point out that there has been another reshuffling of Russian commanders. The dates are still a fog when things have happen but Dvornikov is out for certain and we have Serdyukov who has also been kicked out. This is like the third major restructuring of the command for the Russians and no wonder their strategy is “in the air” as to what they are doing.

Operational encirclement – by definition – doesn’t mean that the encircled troops are physically surrounded, it only means that supplying them is difficult if possible at all and that they cannot easily move around. The road from Seversk is within the artillery range so moving tons of – for example – artillery shells is a non trivial task. My understanding is that the Russians are trying to use the momentum and move forward while Ukrainians… Read more »

Yes, you are absolutely right about the prospects of Lisichansk. However, this area is good for defense and, despite the road being shot through, there are more supply opportunities in this area than it seems at first glance.
Of course, we are all armchair generals, but questions about the strategy of the Russian Federation, strange at first glance, arise not only for me.

Jerome: Actually, your statement: “Russian troops captured a dozen Ukrainian soldiers at most, likely the troops who covered the retreat and didn’t make it in time” is a bit wrong. Official LNR reports speak of 90 killed, and 53 captured Ukrainian troops for June 24 & 25 combined, in all their area of operation, i.e. Zolote/ Hirske and Sieverodonezk plus suburbs. The captures look somehow correct (there was a video posting with a bit over… Read more »

Brilliant summary as always! I am wondering how much (if any) of the Russian propaganda is actually true because they have reported that they struck and killed 50 UA generals?!.. Only to dismiss the “news” even in their own media. Really strange.

The retreat done from Zolote was phenomenal work by Ukrainians, but they are under some WW2- Battle of Leningrad-level arty fire in that river area.

Russians said 50 generals and officers not only generals, they just knew that general stаff is there.
Phenomenal work of losing territory ?

Last edited 7 months ago by WagnerRusich
17
-19

They said 50 officers, including generals. Claimed enemy casualties are almost always inflated by all belligerents of all wars, and not even always deliberately, so it’s most likely exaggerated, if it is true at all. But at least one notable Ukrainian officer was reported killed by Ukrainian officials, which may or may not be linked to this strike.

I just want to notice the huge difference between 1 and 50. In this case, we are not talking about inflating numbers but about plain disinformation. If many high-ranking officers had been killed by that strike, the information would have already come out. Families would have been notified and funerals would have taken place. That type of attack can be hidden maybe for some time, but not for this long.

in russia would be daily job , infact so far they have lost few soldiers since the beginning of the war . officially in russia there are no figures , they said around 2 thousands KIA so far . if in Ukrainian side they admitted to loose 100 soldiers per day since may/june probably russian soldiers are made of steel . I wonder what the families think . do they really think it’s a walk… Read more »

That is why it is referred to as "the Soviet man". This mentality is unique in itself. Not understood by a free man from Western Europe. I live in a country that has experienced this "upbringing" for 45 years. More than 30 years have passed since the Soviet Union left, but for many people little has changed so far. Hence it is as it is. You have a similar upbringing in China, especially in the… Read more »

I see report (propaganda? I dont have time to verify) of russian families forbiden to sent honour to their death on public area (internet)