As winter approaches Ukraine, it is an appropriate time to look at weather and its effects on the battlefield on both Ukrainian and Russian forces.

A military Intelligence Officer is primarily concerned with three things: Enemy, weather, and terrain.  Average winter temperatures in Ukraine range from -7°С to +2°C and according to the U.S. Army, this fits the definition of a “Wet Cold.” The main problem with the ‘wet-cold’ environment is that the ground becomes slushy and muddy; it is never fully frozen or dry. The issue is well known, so much so that both nations have a name for it: Ukrainians call it “bezdorizhzhia,” or roadlessness, and Russians, “rasputitsa,” or disagreeable travel. Winter’s effects on army operations are numerous.  These range from changes in operations, logistics, and personnel considerations.

First and foremost, the onset of winter considerably slows down army operations; especially on the offense. Defensive positions are advantageous because of the ability to maintain warmth and protection, compared to attacking in cold weather.

Military vehicles in this environment face particular mobility challenges, wheeled vehicles may require tire chains. Diesel engines start less well in cold and may require pre-heating or idling during cold periods already drawing on diminished Russian fuel supplies.  Tracked vehicles can swap out pads for cleats. However, while cleats can gain additional traction on ice and snow, they are of little use in the mud. 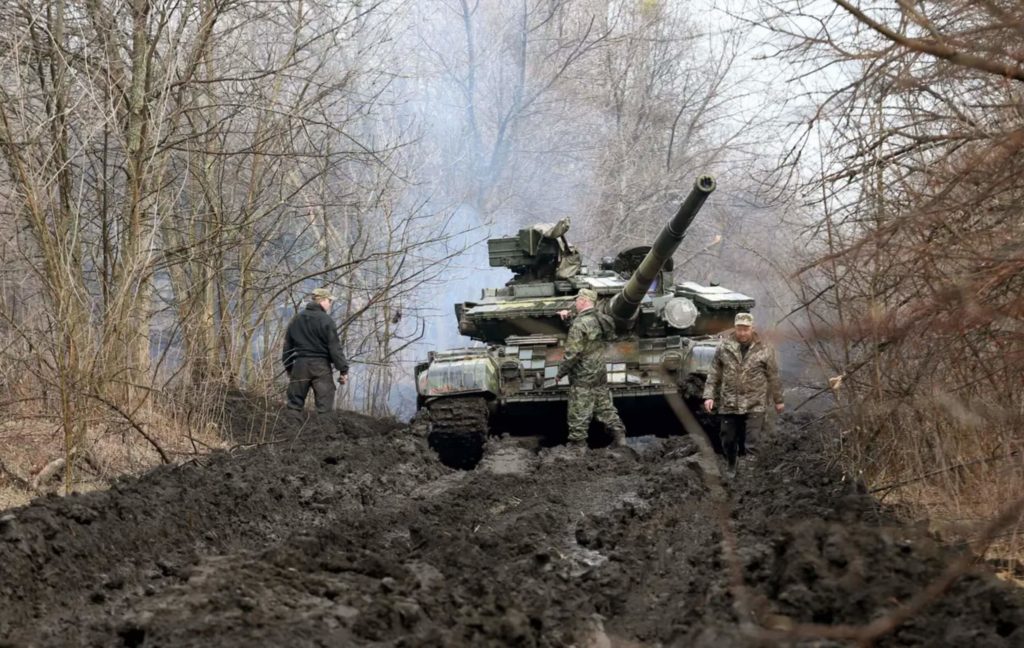 The freeze/thaw nature of the Ukrainian winter restricts avenues of approach mostly to roads, making it difficult for offensive ops. Roads are typically avoided as canalized ground (the restriction of movement to a narrow area because of terrain) makes it easy for artillery and anti-tank assets to defend against. This is more of an issue in the Southern area of operations where the ground is at a lower elevation and has higher water tables.

The ways to combat this challenge is to reorganize. Attacking forces can’t deploy on wide fronts. The Ukrainian army needs to break down into smaller formations (combat teams) with lighter guns/mortars in close support. Good communications with fire support assets is essential. Tanks and IFVs restricted to roads or higher firmer ground can provide direct fire support for infantry on the advance.  Soggy terrain also makes it harder for artillery to employ ‘shoot and scoot’ tactics making guns and launchers more vulnerable; especially in the defense.

Snow, ice, frozen ground, and low temperatures affect mine-laying operations. Burying mines in a frost layer may be difficult, requiring mines to be placed on top of the ground and then camouflaged. Snow or ice may prevent detonation, owing to freezing the firing device or isolating from pressure above.

Likewise, cold weather effects small arms operations.  Trigger and safety mechanisms may freeze if subject to condensation. Belt fed guns can jam if the ammunition has ice on it. Ironically, weapons need to be left outside to prevent freezing. Icing may prevent more complex weapons from operating including restraining launch systems or binding other moving parts. Some electrical parts may be susceptible to condensation and shorting.  System electronics also take considerably more time to warm up.

The weather does not only affect land ops. Due to the temperatures fluctuating around zero, there will likely be a reduction in Close Air Support missions and UAV sorties, for both reconnaissance and attack.  Fluctuating weather reduces flying hours, as visibility is hampered by fog and snow; the days are also shorter.

An army marches on its stomach, and a good warm bed doesn’t hurt either.

Due to the frequent freeze thaw cycles, clothing and equipment becomes perpetually wet and damp. Cold and dampness can put soldiers at risk of trench foot, hypothermia, and in extreme cases, frostbite. Handling of weapons becomes more difficult as the fingers and hands can freeze on metal parts in extreme cold. Gloves can prevent this, but make weapons handling clumsy.

Proper winter clothing is required to maintain body heat and to avoid such cold injuries. While Russians are no strangers to cold weather, it is highly unlikely that the recently mobilized have any access to cold weather gear. This will make for a very miserable existence, negatively effecting morale. Meanwhile NATO has committed to providing the Ukrainians with cold weather clothing.

Finally, rapid removal of the wounded from the battlefield is essential to their survival in all weather. However, cold weather makes it harder to reach, treat, and evacuate the wounded.  Inability to save wounded soldiers will also have a negative effect on morale.  Russia is already having problems with casualty evacuation, and it will only get worse as winter approaches.

For Ukrainian and Russian military planners, the clock is ticking.  Already, rainy fall weather is bringing muddy conditions that are starting to limit the mobility of tanks and other heavy equipment.

The Ukrainian Army needs to continue to advance before bad weather sets in and consolidate their territorial gains. The UA needs to continue attacking supply lines and personnel concentration areas as attacking encampments, convoys, and supply depots deprives the enemy of food, shelter, and warmth. This operational pause will enable the UA to further shape the battlefield and attrit Russian forces before the resumption of offensive ops.

The cold weather will adversely impact Russian morale more so than the Ukrainian soldier.  The average Russian soldier is poorly-equipped, ill-supplied, and is hard-pressed to muster any rationale to put up with the miserable winter conditions. Despite the long history of Russian winter warfare, there is little evidence to suggest they are prepared for this Ukrainian winter.

Sry guys but I am somewhat puzzled. All these worries (while for some extent reasonable) are framed as it for Ukrainians the very concept of “Winter”, especially: “Ukrainian Winter” was strangely alien and suddenly everything will break and General Winter will smash all and allow RFAF free and total reign.
Does Kyiv is in tropical zone? Maybe I missed something for all these years?

I think the moblity of light infantery will be better than mechanized infantery.

Russia will probably have difficulties to secure large area between strong defense point.

Ukrain infantery will slowly infiltrate and surrounded russian troup. Forcing them to retreat.

I’m not sure about the morality
1. -5°C won’t seem cold to a Siberian from Irkutsk. They’re used to this and worse (much worse) half the year there.
2. if I were a Ukrainian, I would be annoyed that the mud and cold has stopped a promising offensive and I would be afraid that the Russian will have time to prepare better before spring. It certainly wouldn’t improve my morale.

It will be if the soldiers have to spend all day outside without proper winter gear, getting wet and damp while warming up from the cold. Humidity makes everything much worse and miserable when spending time outside. Also there’s a difference between dry cold Arctic climate and wet cold windy climate, the humidity sticks to the skin and makes it more freezing.

I will not make any difference, as Russia does not have proper quantities of equipment to supply for soldier. Captives already telling they were spending all night without enough clothes. So guys overestimating them. You are telling they are used to this, but they did not fight in such seasons. Ukraine was doing that for 8 years. And again all Infantry battles were absolute defeat for Russia army

To quote the guy from Svalbard (in “Pole to Pole with Michael Palin”): “There is no such as an inclement weather, just insufficient clothing.” Guys from Irkutsk are not miraculously endowed to live in 15˚C freeze, they just know that they have to use the winter gear and they have it available. Nothing will help them in Ukraine if they don’t have it.

There is a difference between “Wet-cold” and “Dry-cold”.
Also, you should take in account that russian soldier is very poor equipped, so even if you from Siberia, your naked ass will feel cold and your morale will be down same as your health.

I live in a similar climate. I’m outside a lot in the winter. Its a good time to work on my land. Fishing seasons are over. I have all the gear to stay comfortable. Nobody shooting at me. I wouldn’t last long all damp and wet near freezing temps. Wish someone would give Putin a Polonium laced meal. He deserves a slow agonizing ending….

winter gonna be interesting (possibly that is)