Ukrainian forces managed to advance in the southern Ukraine and also regained control of Vesele in Kharkiv Oblast.

Russian army continues to target border areas of Ukrainian Chernihiv and Sumy Oblasts and focuses its main force on Sievierodonetsk, where they are slowly pushing Ukrainian troops out of the city.

Belarusian army has reportedly strengthened its presence on the border with Ukraine. 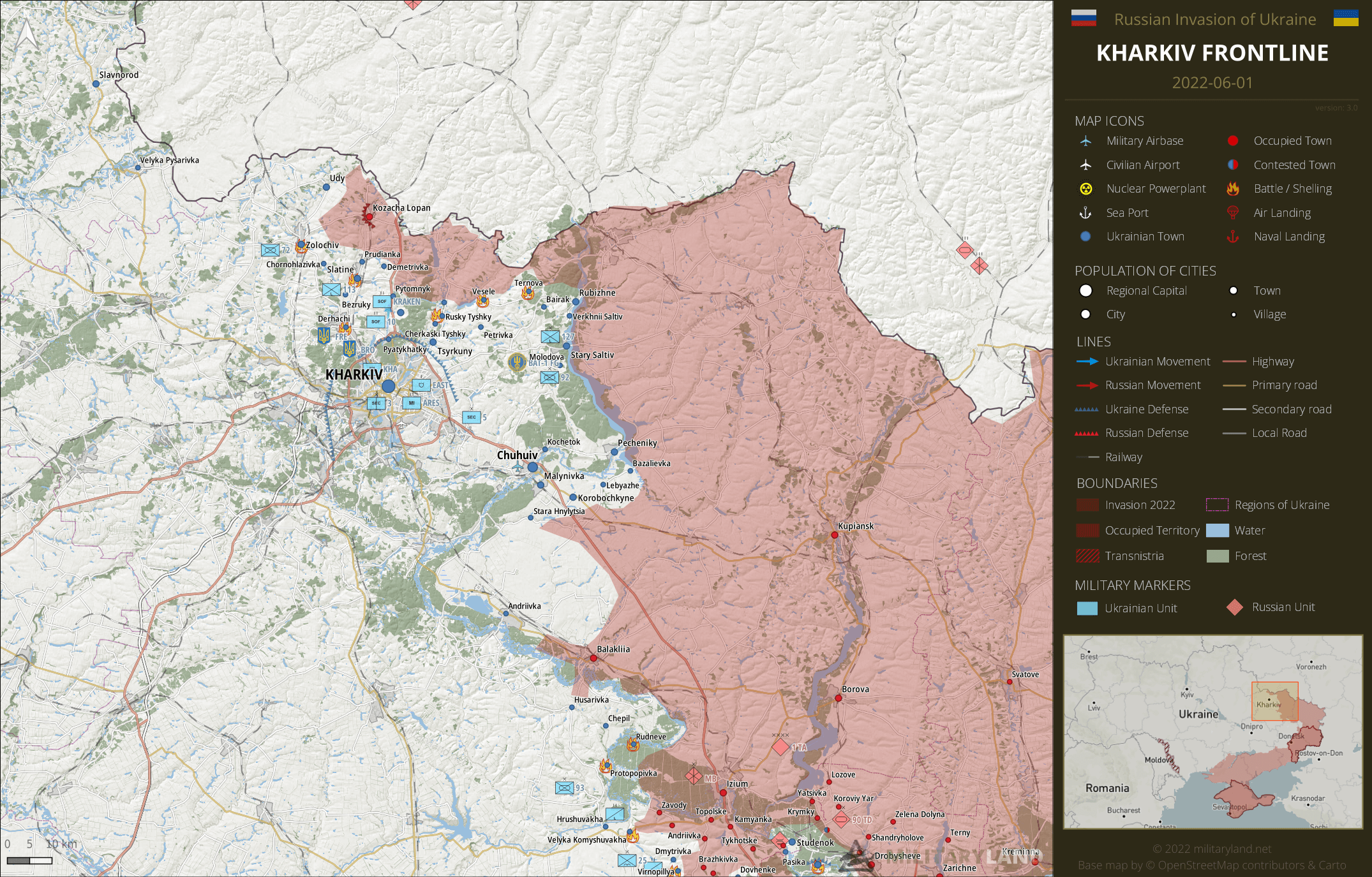 Russian army, aware of the Ukrainian success in the vicinity of Kharkiv, has reportedly started to built defensive positions in the area of Kupiansk.

Russian forces have repaired a railway bridge near Kupiansk, allowing them to resume operations on the Kupiansk – Lyman railway branch. 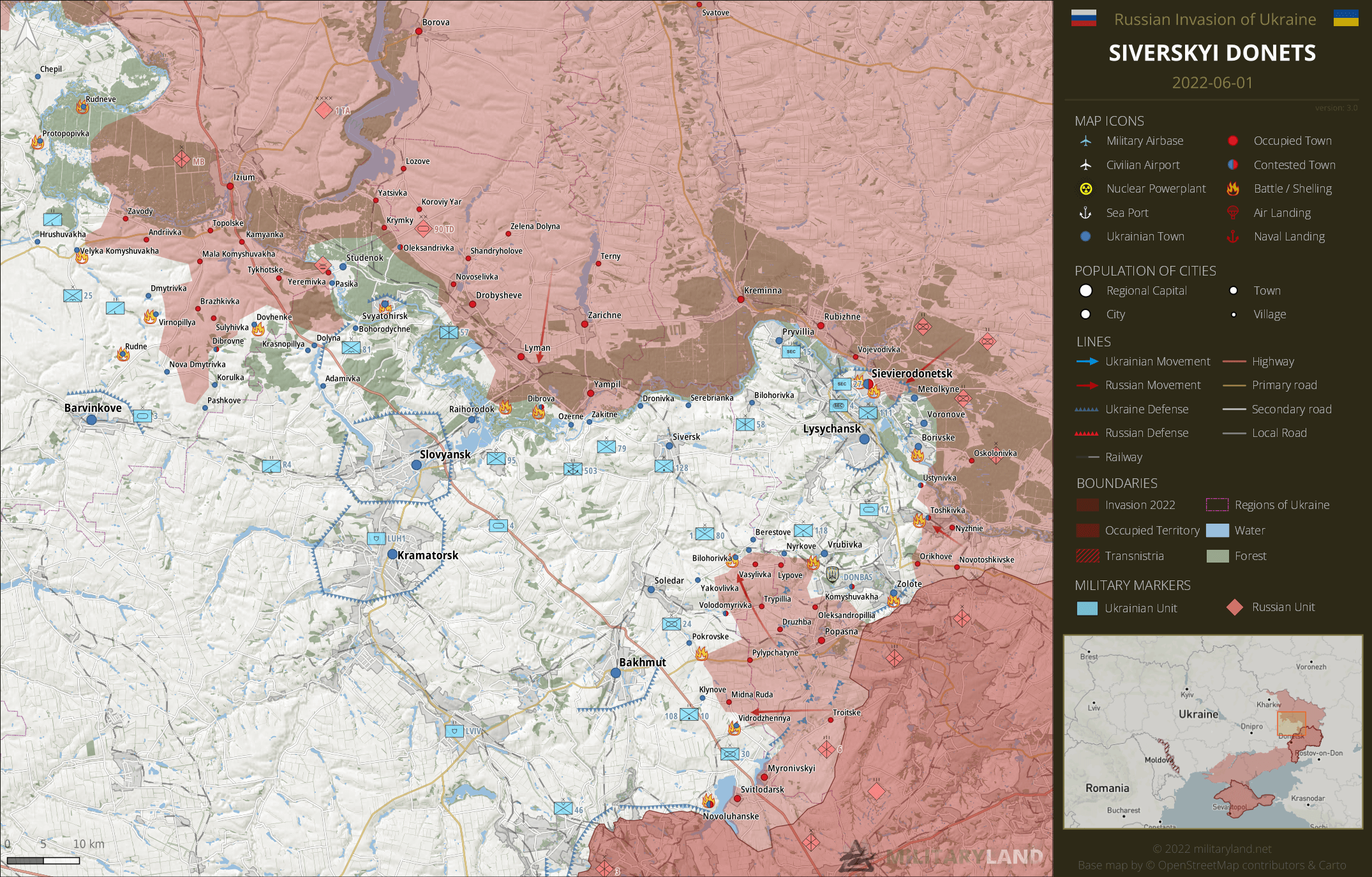 Russian troops assaulted Ukrainian positions at Dovhenke and Dibrovne, but were pushed back.

The enemy is reportedly preparing to cross Siverskyi Donets river and advance towards Raihorodok and Siversk to further complicate the situation for the Ukrainian defenders.

Fighting continues on the streets of Sievierodonetsk, mainly in the south-eastern district. The eastern and northern districts were captured by the advancing Russian troops. Ukrainian troops retreated from Oskolonivka to avoid encirclement. 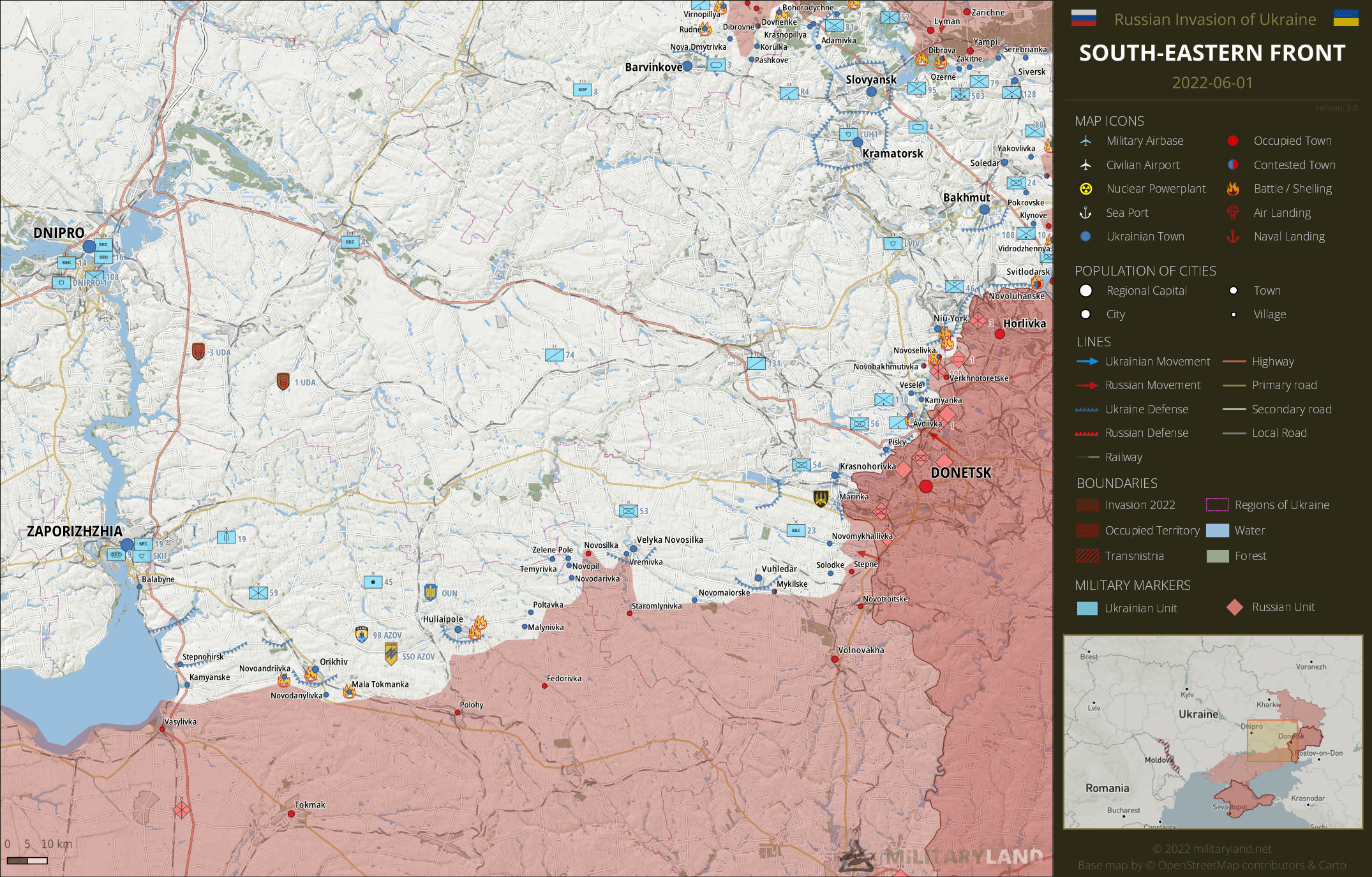 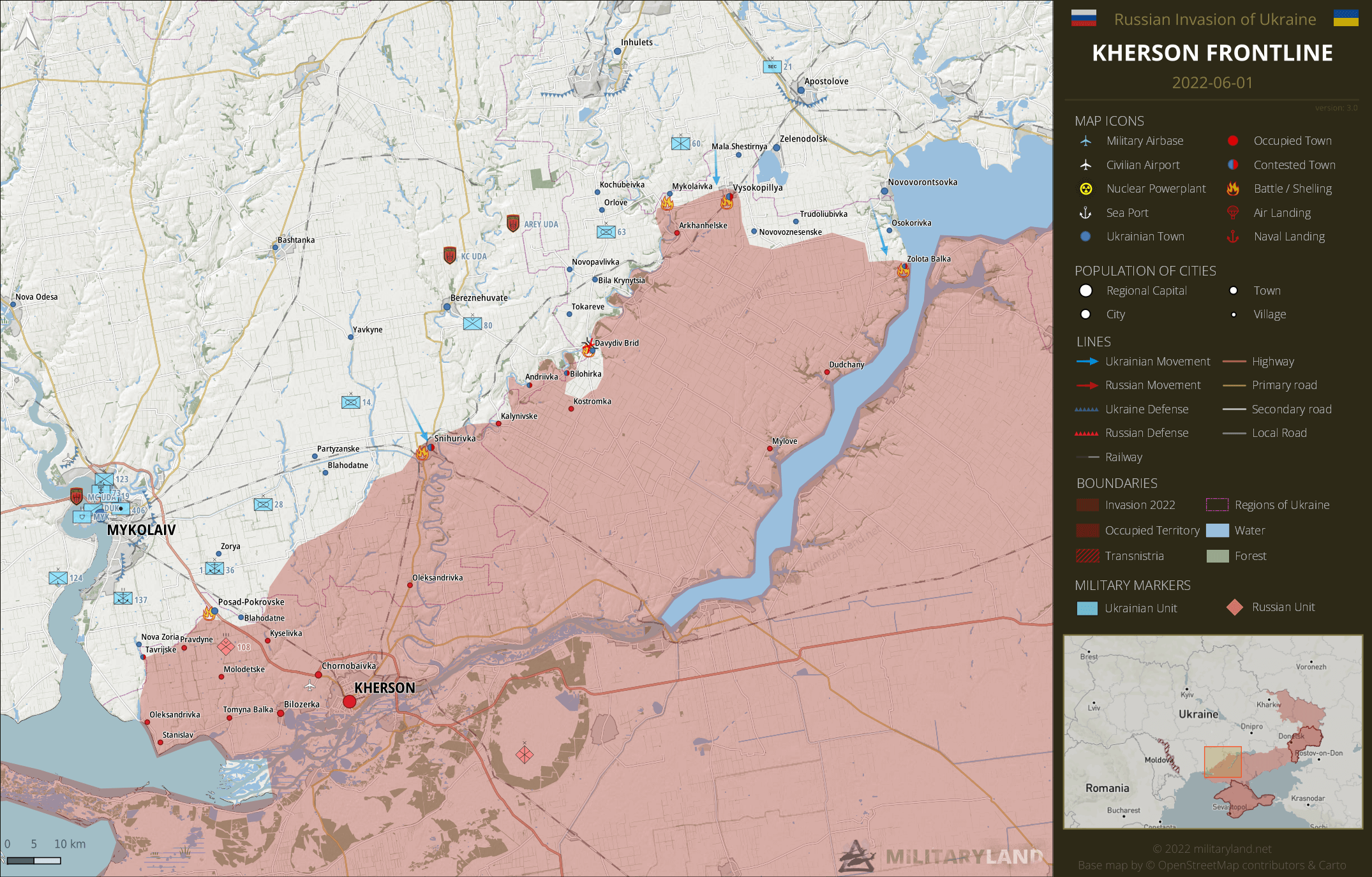 Ukrainian officials stated in the evening that Russian forces shelled Ukrainian positions in the area of Snihurivka (Mykolaiv O.), Vysokopillya (Kherson O.) and Zolota Balka (Kherson O.), indicating Ukrainian troops have made some progress in those areas and most likely reached the outskirts of the said towns/settlements.

Russian forces managed to destroy a bridge at Davydiv Brid in order to slow down the ongoing Ukrainian offensive in the area. The situation at Andriivka and Bilohirka remains covered by the fog of war. 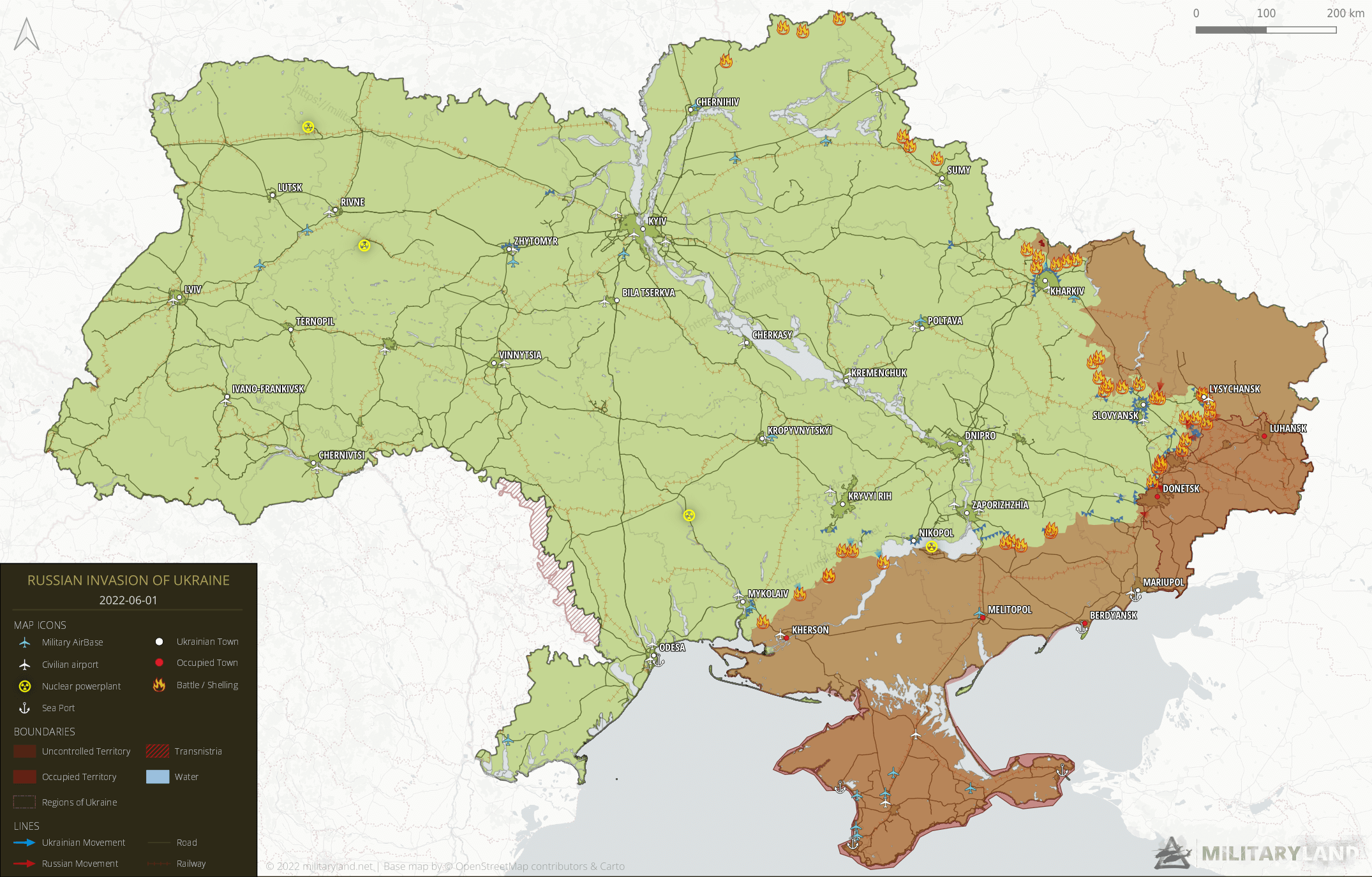 That’s pure BS. The exension of OTAN and the orange revolution occured almost 20 years ago, and Ukraine didn’t threaten Russia in any way.

And Ukraine’s leaders DID update their military, they doubled their military budget since 2014, etc. You are ill-informed (or just another russian bot).

Finaly, they avance in 4 or 5 direction. Something like 5km everywhere.

– davidiv, with at least 2 ponton bridge.

– and May be south at oleksandrivka.

Russian have to colmate the breach rapidly.

“Russian have to colmate the breach rapidly.”

They can “colmate the breach” by retreating to Russia immediatly.

At least Rubezhnoye of the Kharkiv region is under the control of Russia, even the map in the English wikipedia designates it as controlled by Russia. Ternova, at least, is controversial. A number of sources also reported that the Russian army occupied Fedorovka and Shestakovo in the Kharkiv direction, thereby cutting off St Saltov from the rest of the Ukrainian forces.

Kharkiv was always a fixing operation by Russia. Nothing more.

Kharkiv is a strategically and symbollically important city it is unlikely that Russia just did a “fixing operation”.

They definitelly would want to take it but actually haven’t been able to even get into proper positions – after the famous ‘Feint’ they focused on constantly shrinking in size and ambition attempt to encircle Ukrainian Donbas detatchment. Russian army was able to (and apparently just fine with) ‘liberate’ by constant artillery fire. SO: in reality they just blocked the city.

Rubizhne , like the crossing river at staryi saltiv , for me its under fog of war.

Fedorovka and Shestakovo,small units totaly surrounded since 3 weeks ? Its strange .

Curious how would Russians trying crossing the river again avoid the same disaster last month. There seems to have a formidable Ukrainian artilery unit at the southern bank between Bilohorivka and Dronivka yet caught by Russians.

To my understanding if not all, most Ukrainian artillery unites are formidable.

The Russians have not captured the road north of Popasna, which seems incomprehensible.  The troops on the north bank will not be able to defend for much longer. The Ukrainian army should strengthen their defenses on the south bank.

The road from Bakhmut (Artemovsk) to Lisichansk is completely shot through and is under the fire control of Russia, there are many video confirmations of this. There is no normal supply along this road anymore

No they don’t. They started out with drives all over the place. The fact is they’re only CAPABLE now of trying to drive forward in one place at a time and even then at great cost. They’re losing. Get your resume ready. Maybe there will be some other murderous dictatorship you can shill for next year?

Strangely Zelensky today said that 20% of Ukraine is under Russian control. I don’t know how this correlates with the “they’re losing”!!

West of the Cascades
Reply to  Food for thought

World War I ended with German troops still occupying parts of France, Belgium, and Luxembourg — and was a complete defeat for Germany.

Because the war isn’t over. Russia needed the war to be over by now. They are at a strategic impasse and they don’t have what it takes to change that. Look at wars throughout history and, in hindsight you can see when it becomes apparent that the side that lost was going to lose because of everything that’s happened and everything that is stacking up. People who believe Russia is winning this war are still… Read more »