The summary of the ninth day of Russian invasion to Ukraine, 4th of March 2022.

Ukrainian forces continue to defend strategically important areas, but the Donbas frontline is approaching a critical stage. Crucial battles are ahead of us. 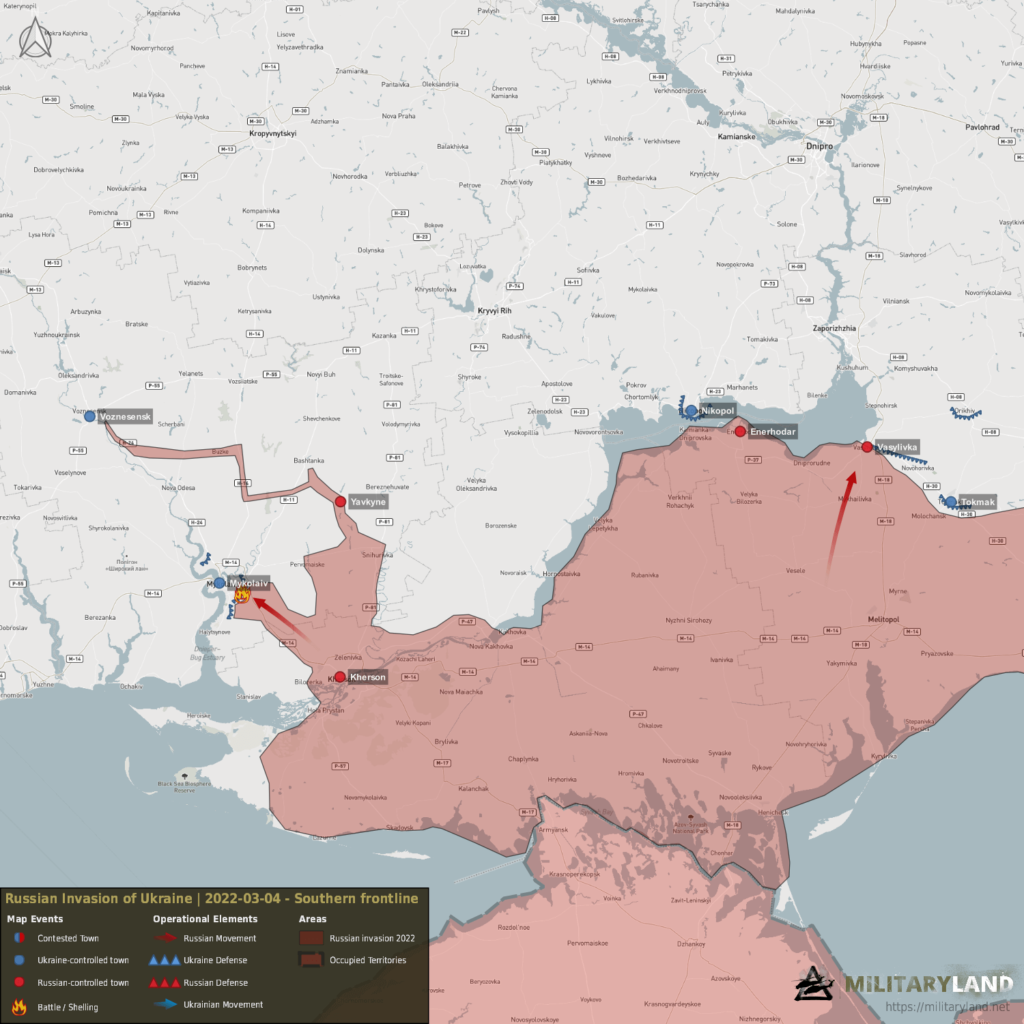 Russian forces attacked and briefly captured Kulbakyne airport on the eastern edge of Mykolaiv. Ukrainian forces conduced a successful counter-attack and pushed the enemy forces out of the area in the afternoon. Spearheading element still roams somewhere in the north, there is no info about it at this moment.

Russian troops are amassing in the area between Mykolaiv and Kherson and will most likely attack Mykolaiv in upcoming hours.

Russian Army reportedly repaired a bridge in Vasylivka, but we cannot confirm it. There are no reports of what’s happening east of Tokmak. 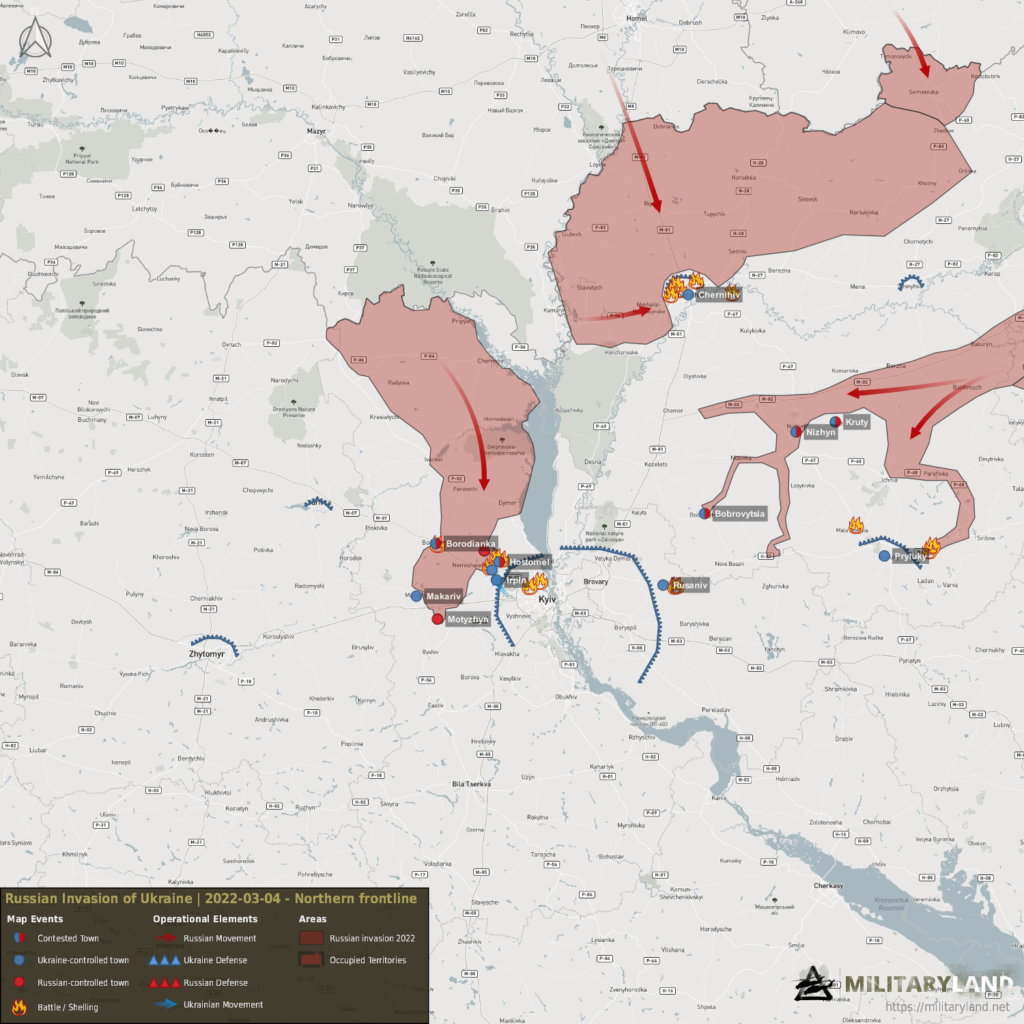 There is large concentration of Russian troops between Borodianka, Hostomel airfield and Motyzhyn. Recent drone footage reveled that Ukrainian forces flooded the area in the vicinity of Irpin river. That explains why Russian forces’ advance stagnates in this area.

The enemy concentrates several strike groups near Chernihiv, but haven’t attacked yet. The city and Ukrainian forces “survived” another day of heavy shelling. 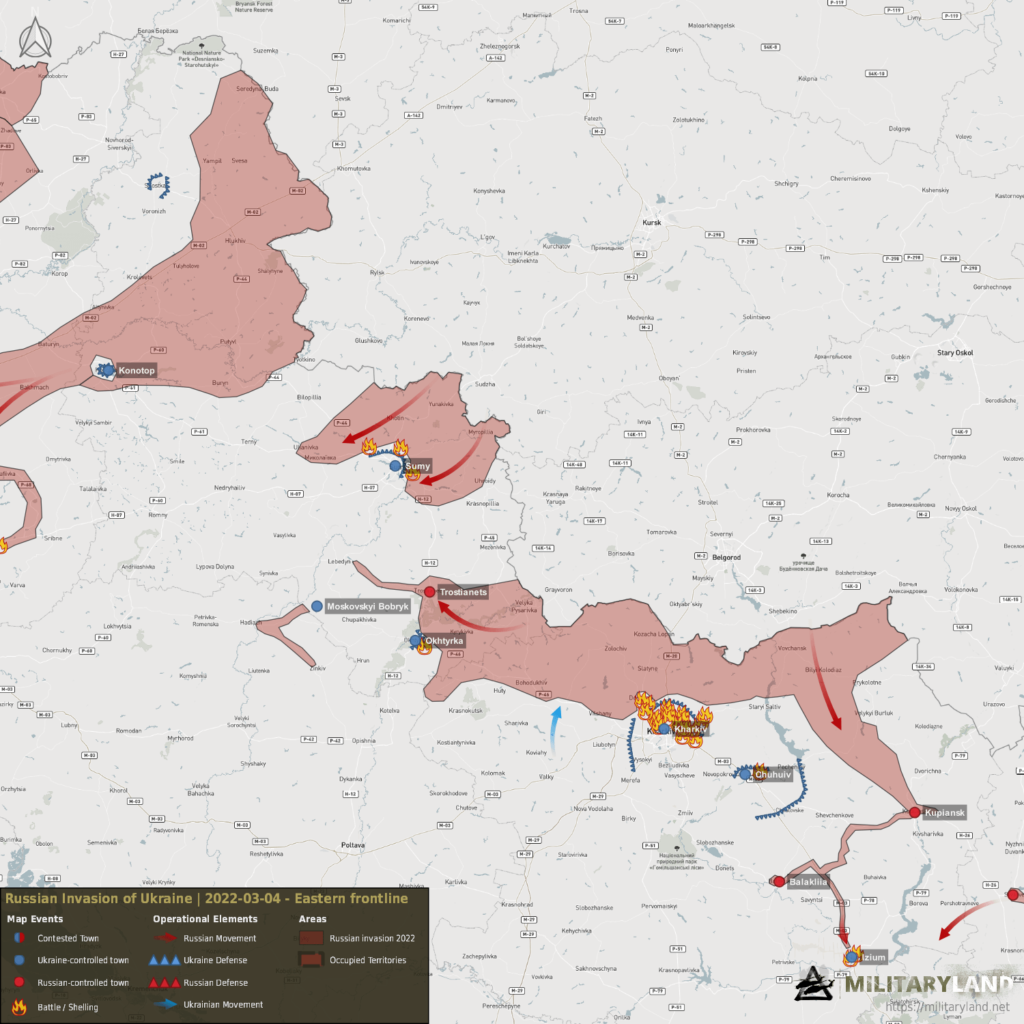 There are enemy elements between Hadiach and Zinkiv. Some reports say Sumy is surrounded, but we cannot confirm it. Sumy remains in Ukrainian hands.

Russian forces continue to shell Kharkiv. Ukrainian forces launched a counter-attack east of Kharkiv, but it’s too early for results. 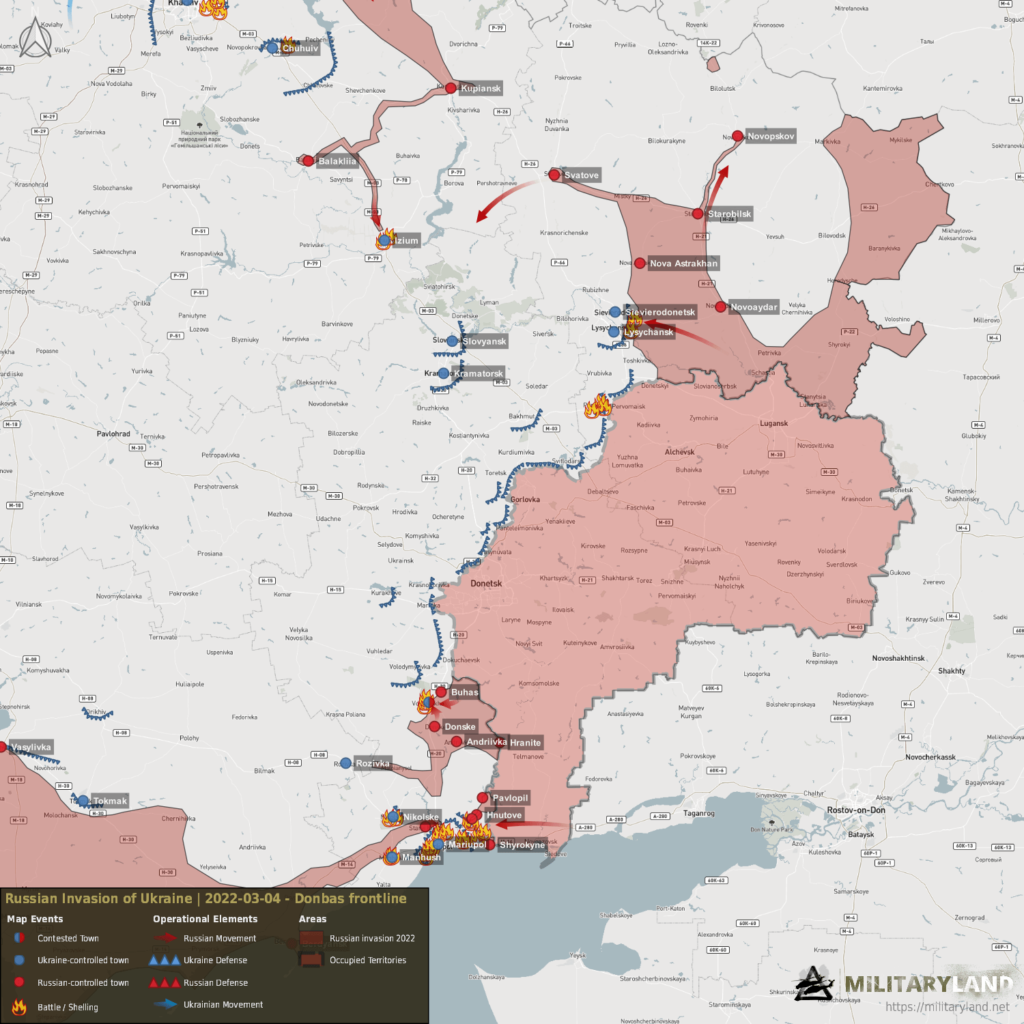 Russian convoy reached Izium. Fierce fighting was reported from the area, but Ukrainian forces repelled the attack and continue to hold on.

Russian forces reached Novopskov, and it is just a matter of time when they announced the capture of the remaining area in between. There is nothing Ukraine can do at this moment.

The focus shifts to Slovyansk and Izium now. Russian forces are reportedly moving from Svatove towards Slavyansk and will most likely try to cut the Ukrainian forces stationed there from the rest.

The battles of Slavyansk/Kramatorsk and Sievierodonetsk/Lysychansk will decide the fate of Ukrainian troops in the northern part of Donbas.

Russian troops de-facto captured Volnovakha and advanced towards Rozivka. If Russian forces captures Rozivka, it’ll be very hard for Ukraine to break the siege of Mariupol.

Russian forces reportedly entered the factory area in the north of Mariupol, shelled Manhush and Nikolske in the west. Mariupol is without electricity, water and heading. Ukrainian forces are firmly holding the line, but the enemy has superiority. Ukraine needs to act quickly. 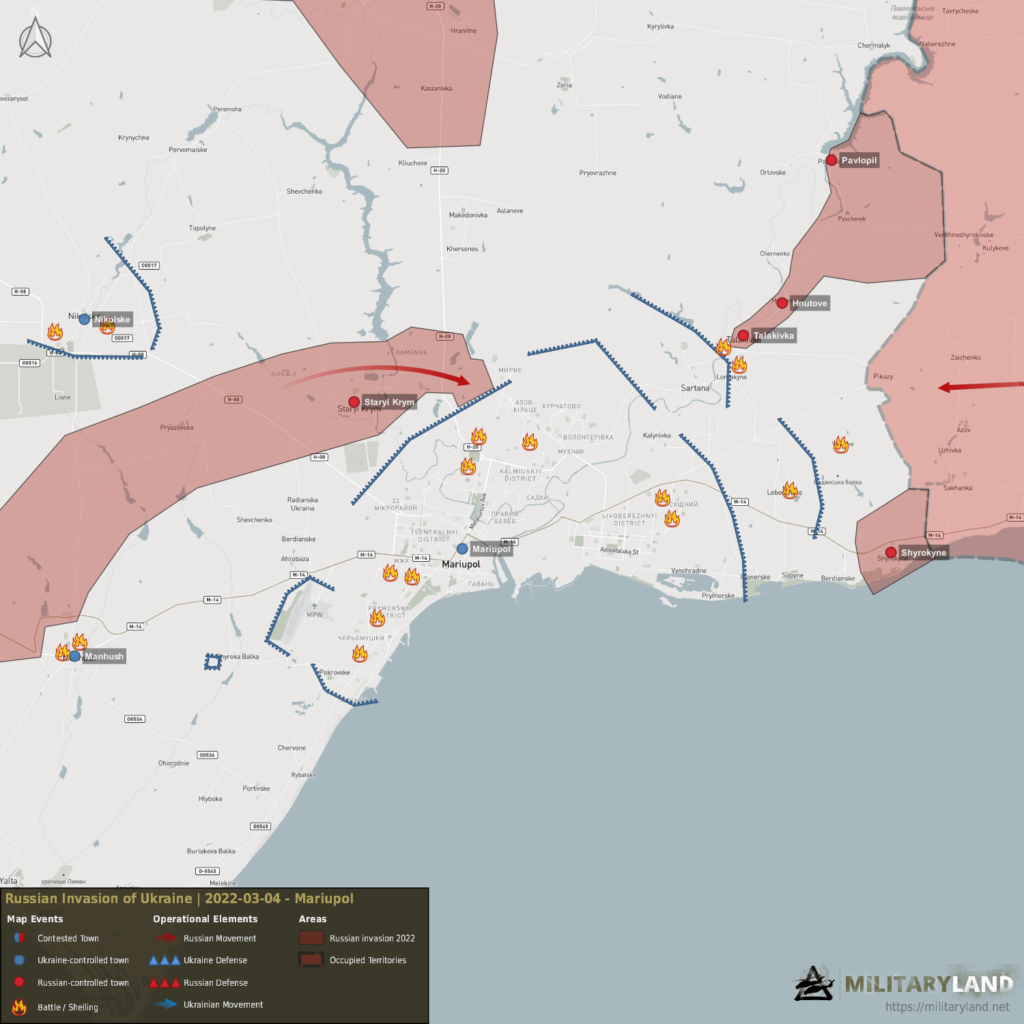 I believe Putin will escalate the violence because he cannot remain in power if he retreats and he cannot sustain a war of attrition. He will begin using his TOS-1 thermobaric missiles against Kyiv and increase the use of standoff artillery. He needs to kill Zelensky, and a concentrated and sustained barrage against Zelensky’s last know location is the logical way to kill him. He may also attack a NATO offensive arms trans-shipment point, then… Read more »

This is a great site, thank you for all the info.

The farther the Russians advance the harder it will be to maintain and defend their already poor logistics. And, they cannot simply apply the whole manpower to the frontlines anymore. On the other hand Ukranians will be able to further concentrate their forces. They also have less positions to care about. With almost complete population support Guerilla tactics behind the lines could turnout to be almost not defendable. Furthermore, the harder the Russians may fight… Read more »

if you believed that russians forces is having suppy luck 30 km from their border (distance to harkiv) yoy are very poor. regard guerilla war in these areas take a look in election map of 2010. Many of your inquries will be solved

“Mykolaiv area – … Spearheading element still roams somewhere in the north, there is no info about it at this moment”. They seem to be heading toward another nuclear power plant in Yuzhnoukrainsk.

NATO and US- Get Ukraine the planes and pilots they need!!

NATO and US- Get Ukraine the planes and pilots they need!!

Today’s events feel very quick. Maybe it’s just my panic coming through in reading the reports, however, the recent breakthroughs seem to have enhanced Russia’s maneuverability in some key areas. This is what concerns me. The Russians have room to be flexible and have the numbers to support it, whereas the Ukrainians are forced in a bitter defensive and faced with increasingly less options. Those poor people. To be in a besieged city without food,… Read more »