The summary of the eight day of Russian invasion to Ukraine, 3rd of March 2022.

Ukrainian forces continue to defend Kyiv, Chernihiv, Sumy and Kharkiv despite heavy shelling. Russian forces in Luhansk region advance north, and they might soon link up with other units.

It’s becoming apparent that all elite Ukrainian units are stationed in the north, and there is no counter-attacking force in the east and south that could stop the spearheading elements. 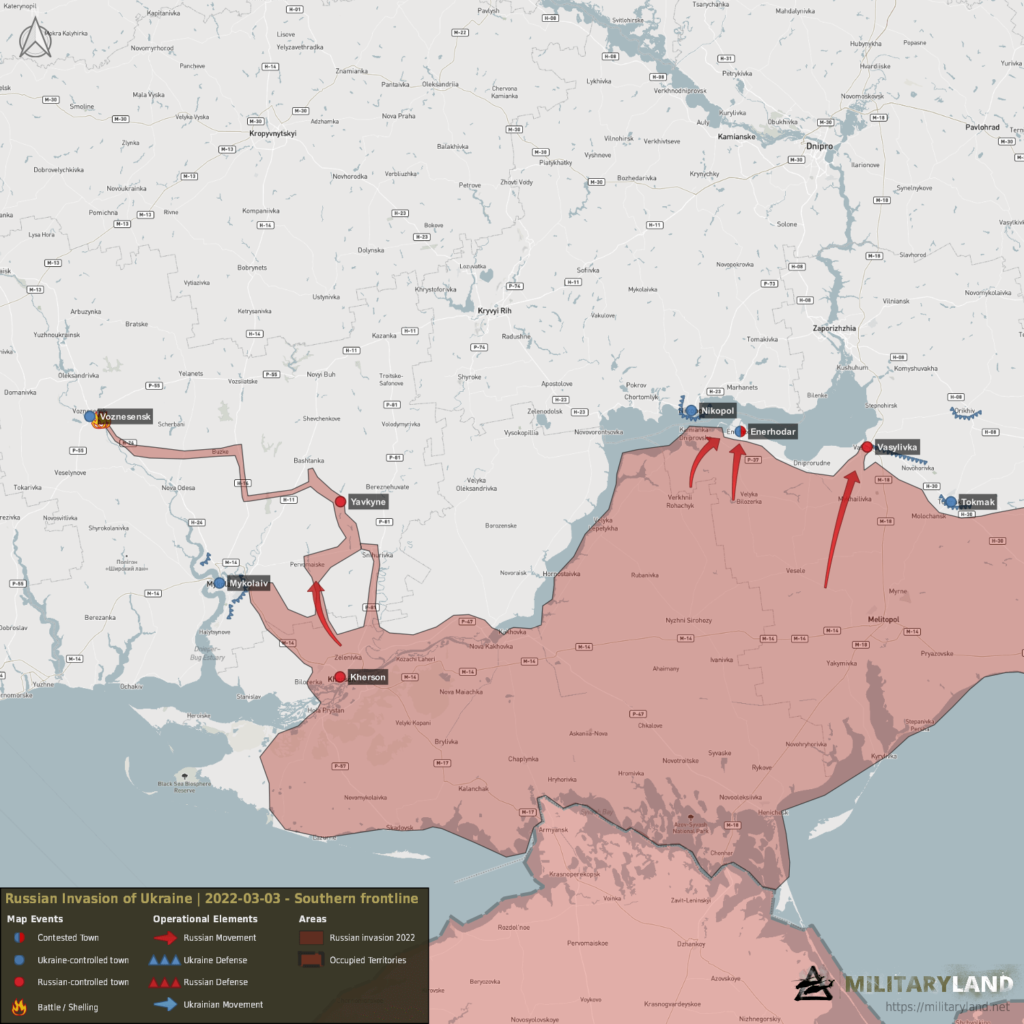 The situation around Mykolaiv was relatively calm. A part of the spearheading element in the north appeared in the vicinity of Voznesensk. Ukrainian troops stationed in the town destroyed several trucks and one BTR-80. Judging by the composition, it was another rear element and the main spearheading force is somewhere else.

Russian forces assaulted a Ukrainian checkpoint at the edge of Enerhodar and entered the town. Sporadic skirmishes are reported from the town. According to local sources, there is only Ukrainian self-defense unit and the army retreated a few days ago. 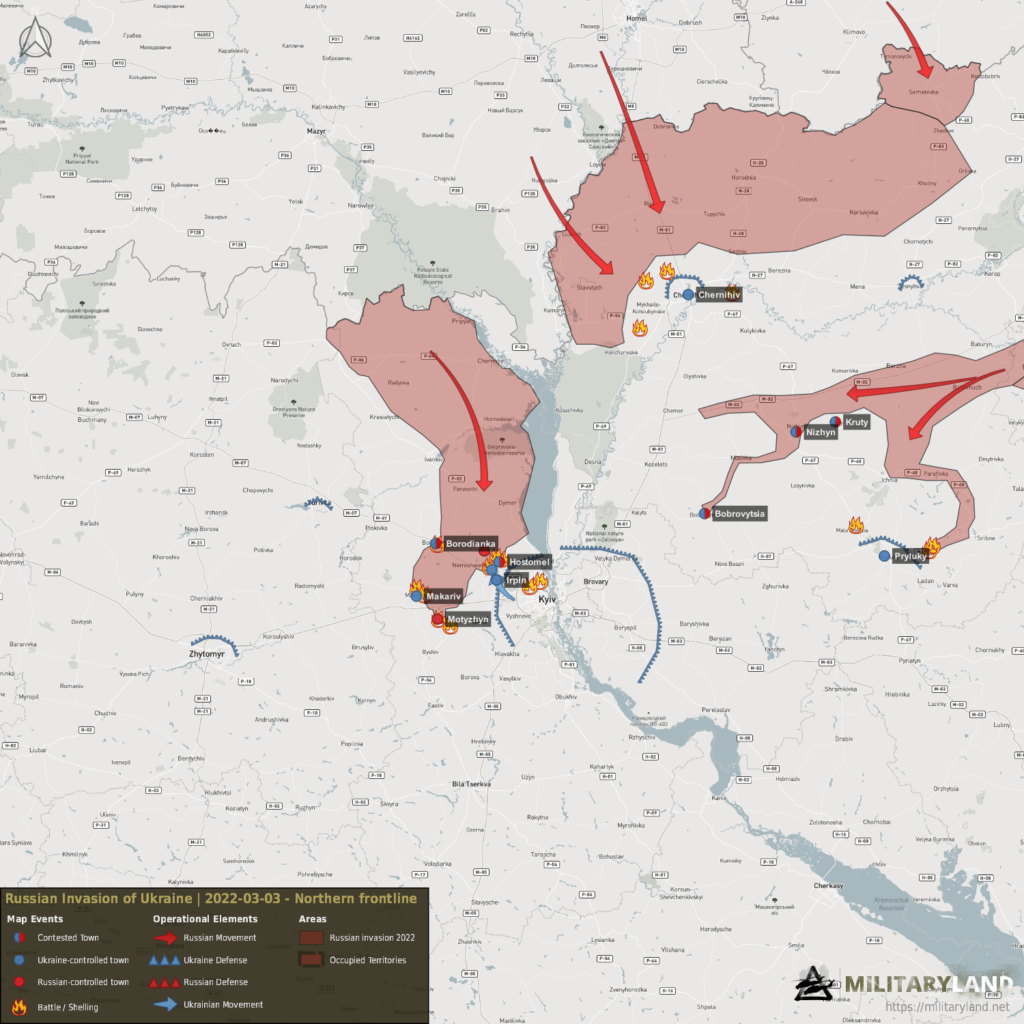 Russian artillery shelled Cherhiniv and caused tremendous damage to civilian structure, including more than 33 killed civilians in a single attack. No ground offensive was reported in the area.

There is a spearheading force roaming in the area, but we are unable to confirm its location or if it reached Brovary, as claimed by Russian sources. 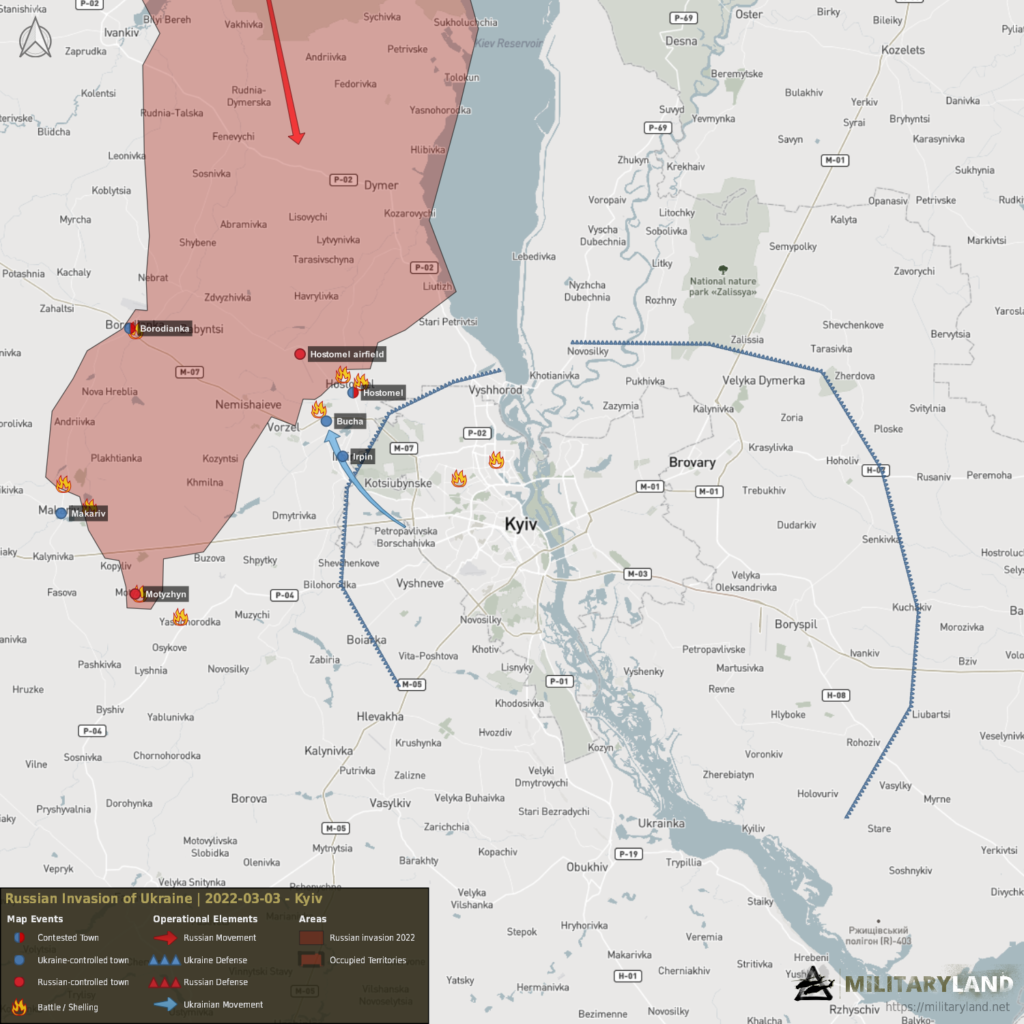 Ukrainian troops conducted counter-attack and liberated Irpin, nearby Bucha and reinforced the defensive lines of Hostomel. There is ongoing fighting on the northern edge of Hostomel. 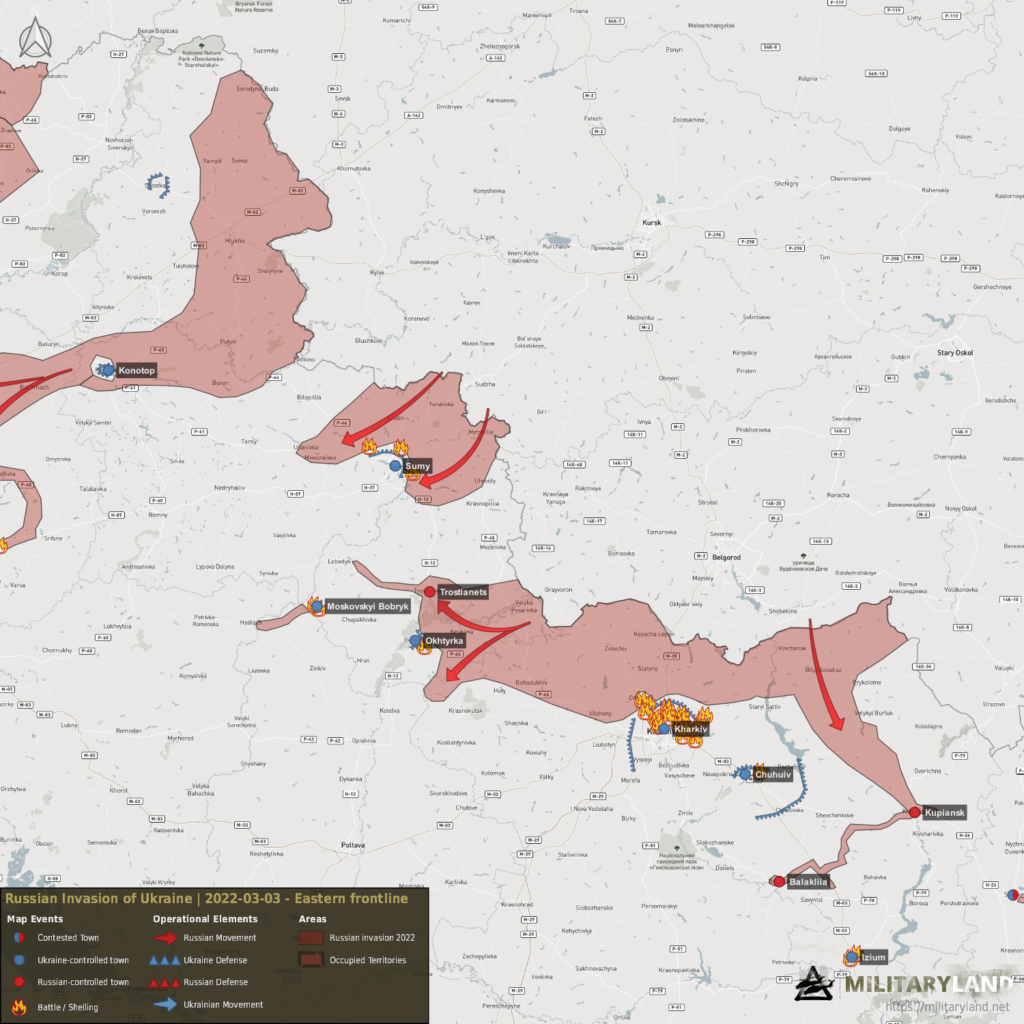 Ukrainian forces ambushed a Russian convoy near Moskovskyi Bobryk. There are reports that Ukrainian 93rd Mechanized Brigade reached the border with Russia and continue to push alongside the border.

Ukrainian troops in Sumy continue to hold on.

Russian forces have changed its tactics and no longer conducts ground operations in the area. They just continue to shell the city by air force, rocket and self-propelled artillery. There are many civilian casualties. 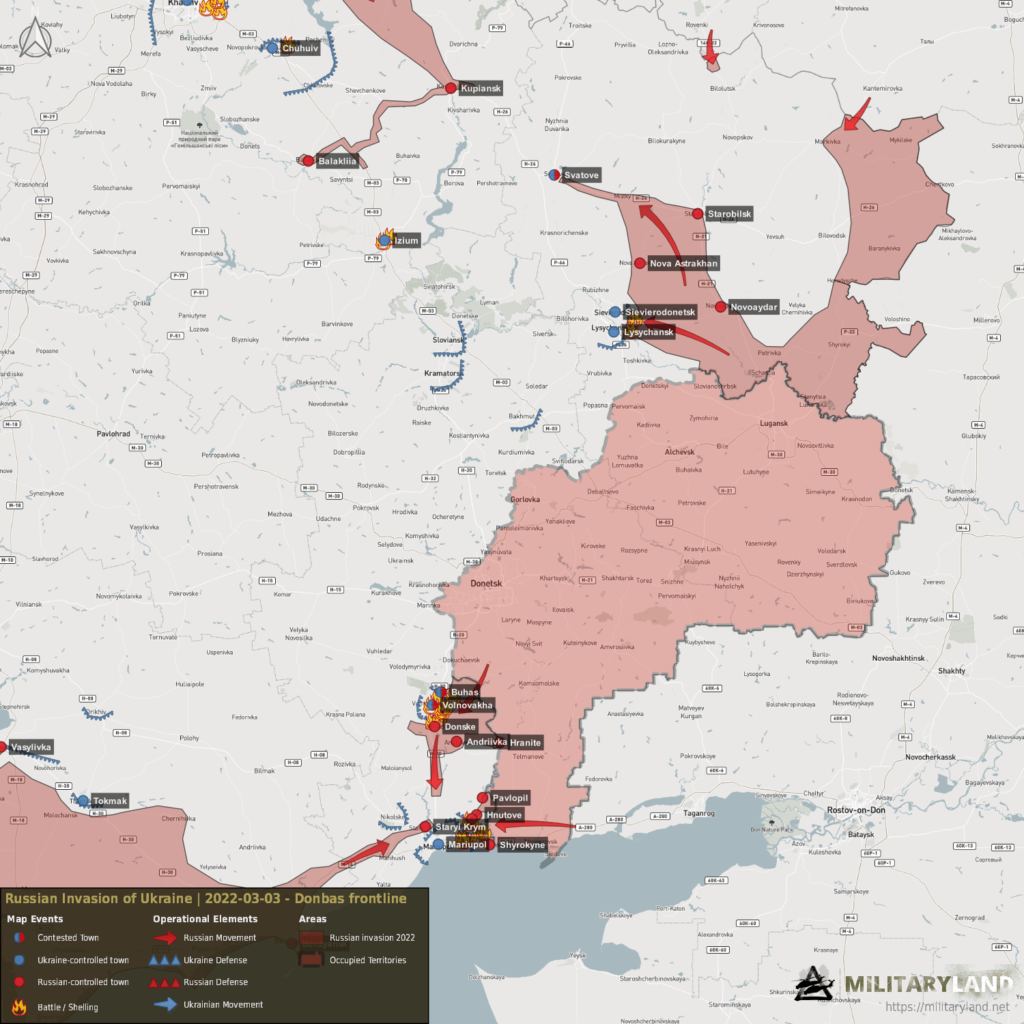 Russian forces shelled Izium during the night. It’s reported that a Russian military convoy is moving towards the city from the Balakliia direction.

Russian forces reached Svatove, but were blocked by Ukrainian civilians. There is a reasonable suspicion that Russian forces from the north might already link up with the forces in the south. However, we are still waiting for the proof, just to be sure.

Anyway, the situation doesn’t look good here. Ukrainian forces are unable to defend the area and focus their defenses near big cities, such as Sievierodonetsk and Slovyansk. The northern part of Luhansk region might soon fall into Russian hands.

Russian forces pushed south of Volnovakha and captured a few settlements. Volnovakha itself is mostly under Russian control, Ukrainian forces sustained casualties and lost some equipment in the town.

The siege of Mariupol continues. Russian forces haven’t launched the promised assault yet. They however continue to shell the city. 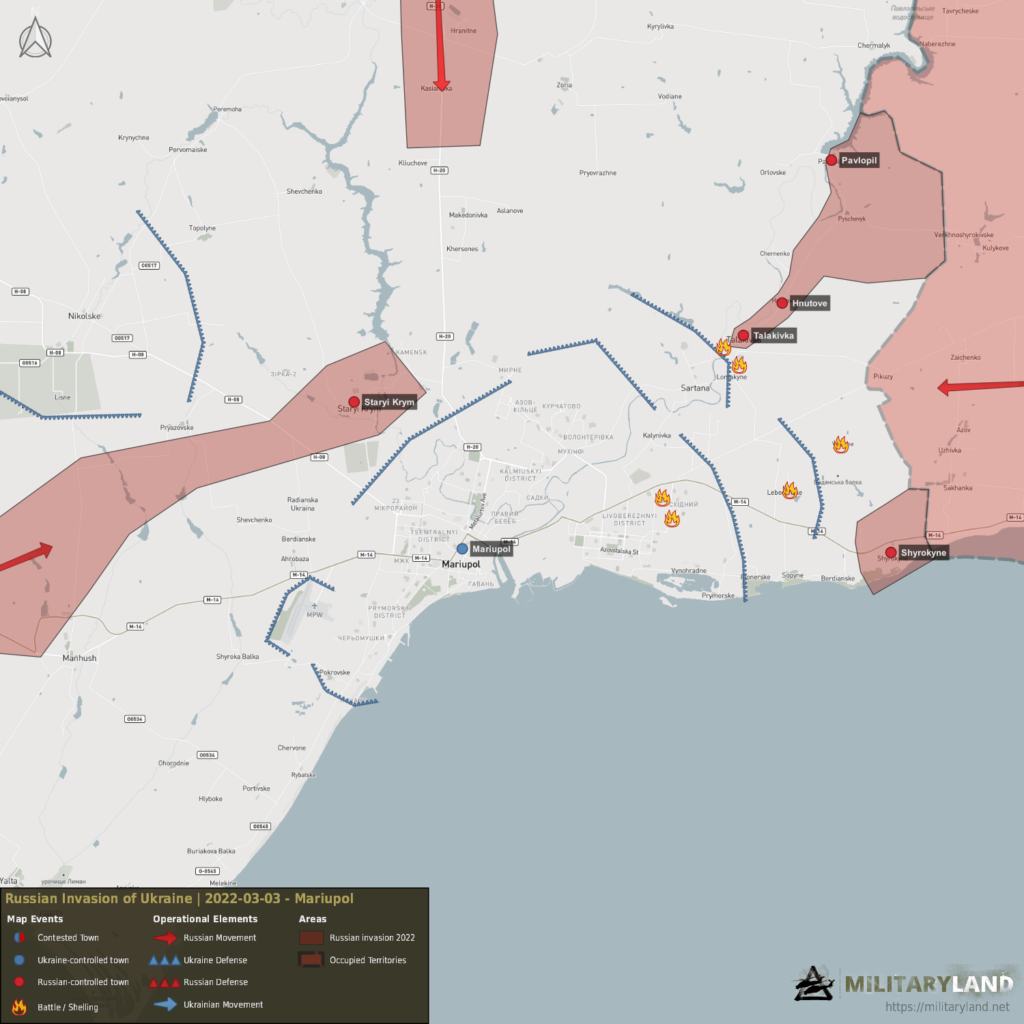 28th Mechanized Brigade and other Ukrainian forces prepare for the defense of Odesa. Russian ships are reportedly moving from Crimea towards the city.

Thank you for the detailed reports
Why the Ukrainian forces doesn’t perform any counter attack to restore kherson using the two tank brigades stationed in kryvy rih?
And why didn’t they defend kherson properly in the 1st place?
Is it intentional to lure Russians West of the river to stretch them thin? Or is it just a mistake?

4th Tank Brigade is near Kharkiv, I moved it there. Where is 17th, no idea. That’s why the marker is in Kryvyi Rih.

On the 93rd Mech Brigade. You have them on the border near Sumy in your update. Yet the map has them South near the Luhansk area. Care to address the discrepancy?

Have you refreshed the map? There are located in Sumy since the last update.

Congratulations on your reports I wanted to ask you, if even in your opinion, the long column marching towards Kiev (and not yet arrived) was just a diversion to push the Ukrainians to move troops from the south to the north. In fact, in recent days there has been a retreat of the advanced positions west of Kiev (which in theory were objects of reinforcement) and strong progress on the southern front (east and west… Read more »

• Thanks to MilitaryLand for daily updates! • Russia attack Zaporizhzhia nuclear power plant – the biggest in all of Europe and it is on fire. Fire is unlikely to cause explosion but instead nuclear meltdown – leading to massive radioactive contamination of Dnieper River, Black Sea and Mediterranean Sea for decades. Ukraine cannot put out the fire because of the fighting. Two working reactors have been shut down but one is still operational to… Read more »

• We should all be grateful to MilitaryLand for their daily updates! • Russian advances on Zaporizhzhia nuclear power station south-east of Kyiv – the largest nuclear power station in all of Europe. The plant has been attacked by Russians and it is on fire. Ukraine cannot attend to the fire because of the fighting there and if this plant explodes, most of Europe and Russia will be laid to waste for over a century.… Read more »

Despite any logistical difficulties they may have, the advance in the south is rumbling along far more rapidly than I thought it would. Disturbing. I’m also anxious about what the collapse of the south front could beckon for the other regional capitals. The UAF was already stretched thin before compared to the Russians, but this puts them on further uneven ground. It is all damned events with a luckless spiral. (And thank you for answering… Read more »

The south is drier and less prone to rasputitsa. This makes progress with (armored) vehicles easier, and reduces logistical headaches. The south may also be less heavily defended, I’m not really sure.