Wednesday passed without significant changes on the ground. Neither side reported new gains or losses.

The situation is reportedly slowly escalating in the nearby Belgorod Oblast. Russian air defense has been active more than usual tonight, and locals also report flying jets. 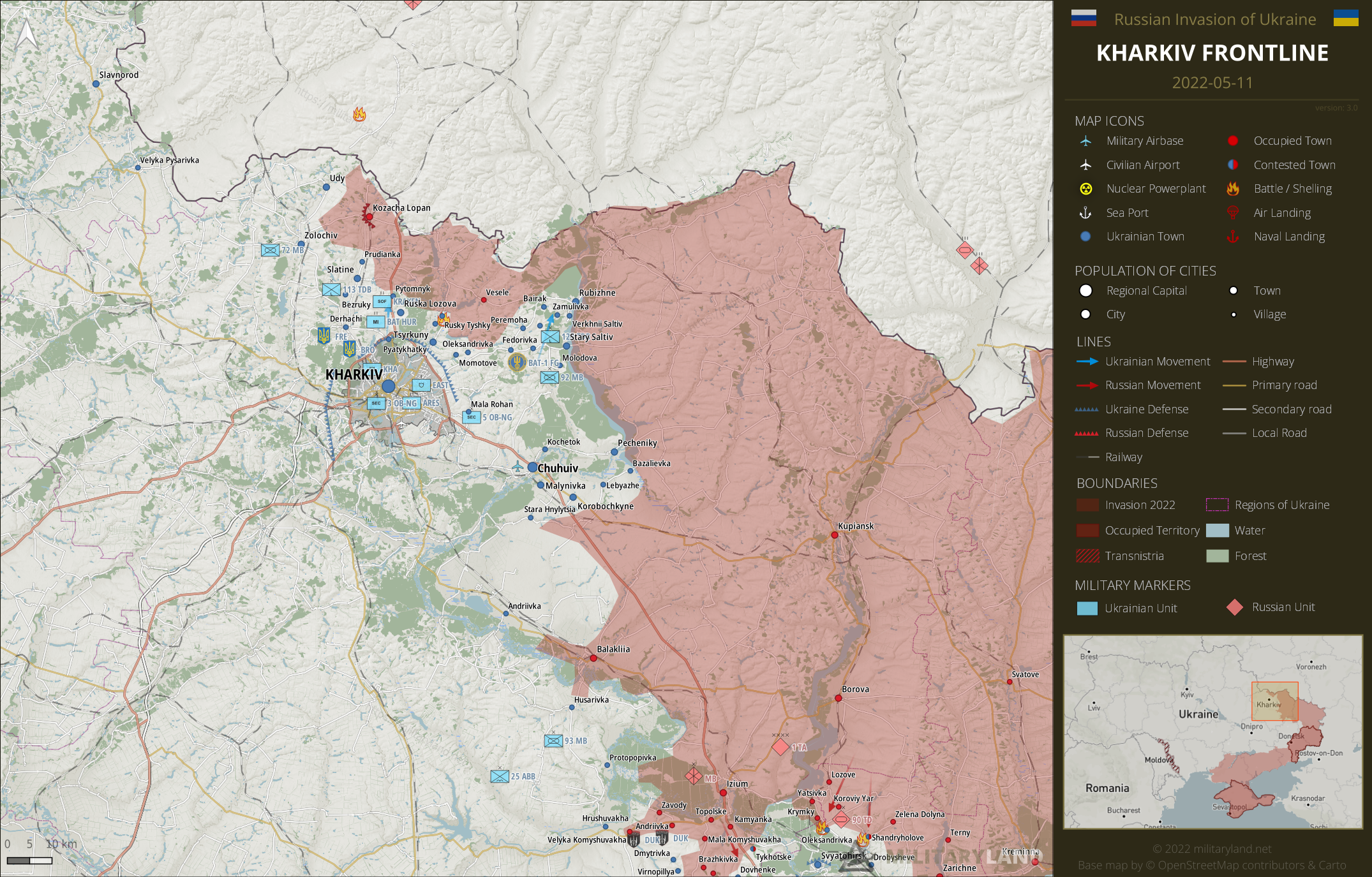 We are still waiting for confirmation if Ukrainian forces reached the border from the direction of Bairak. 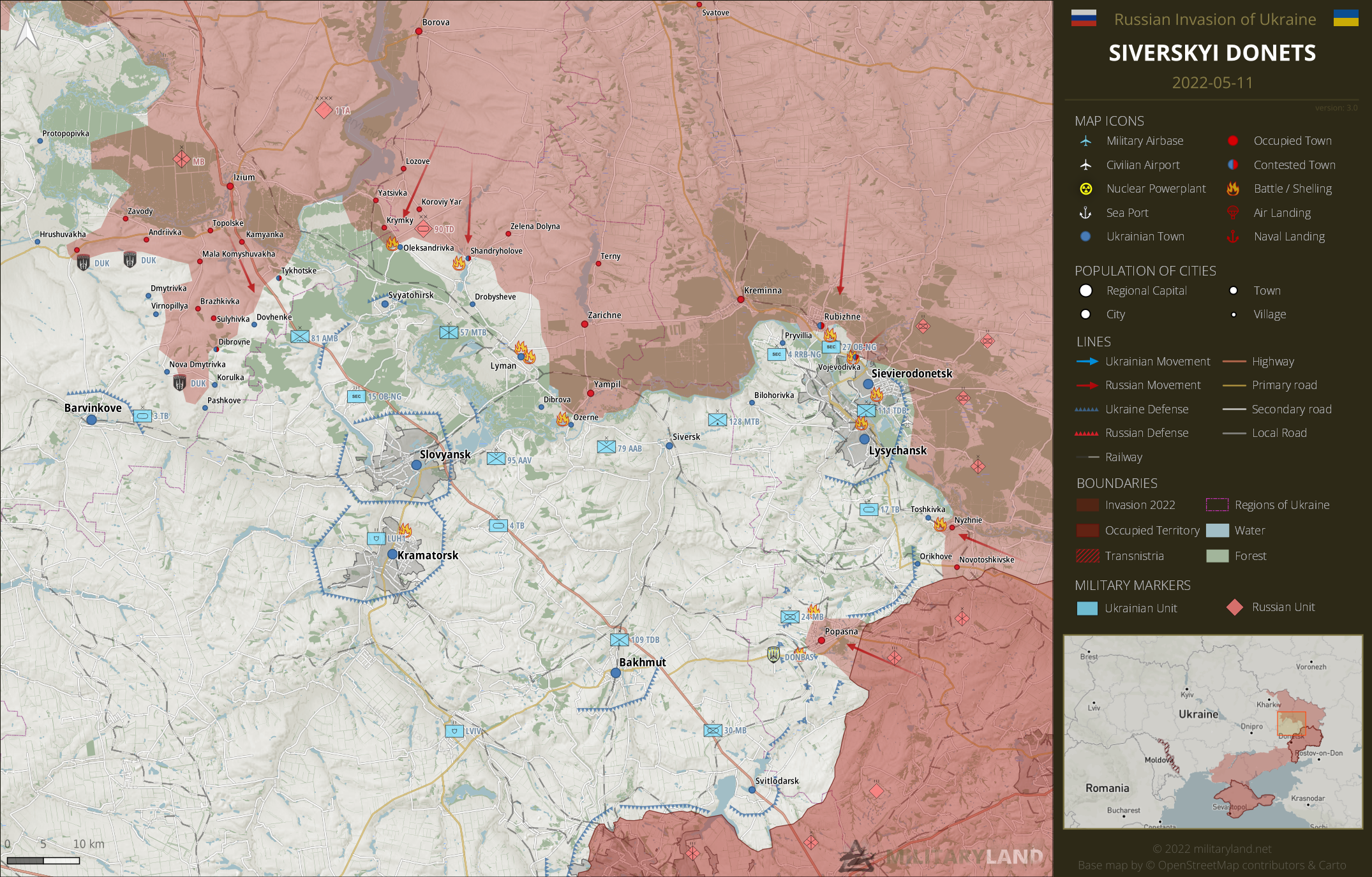 Rubizhne and Vojevodivka remain contested, the fighting is ongoing. Russian troops attempted to advance in the area of Lyman and Ozerne, but without success. 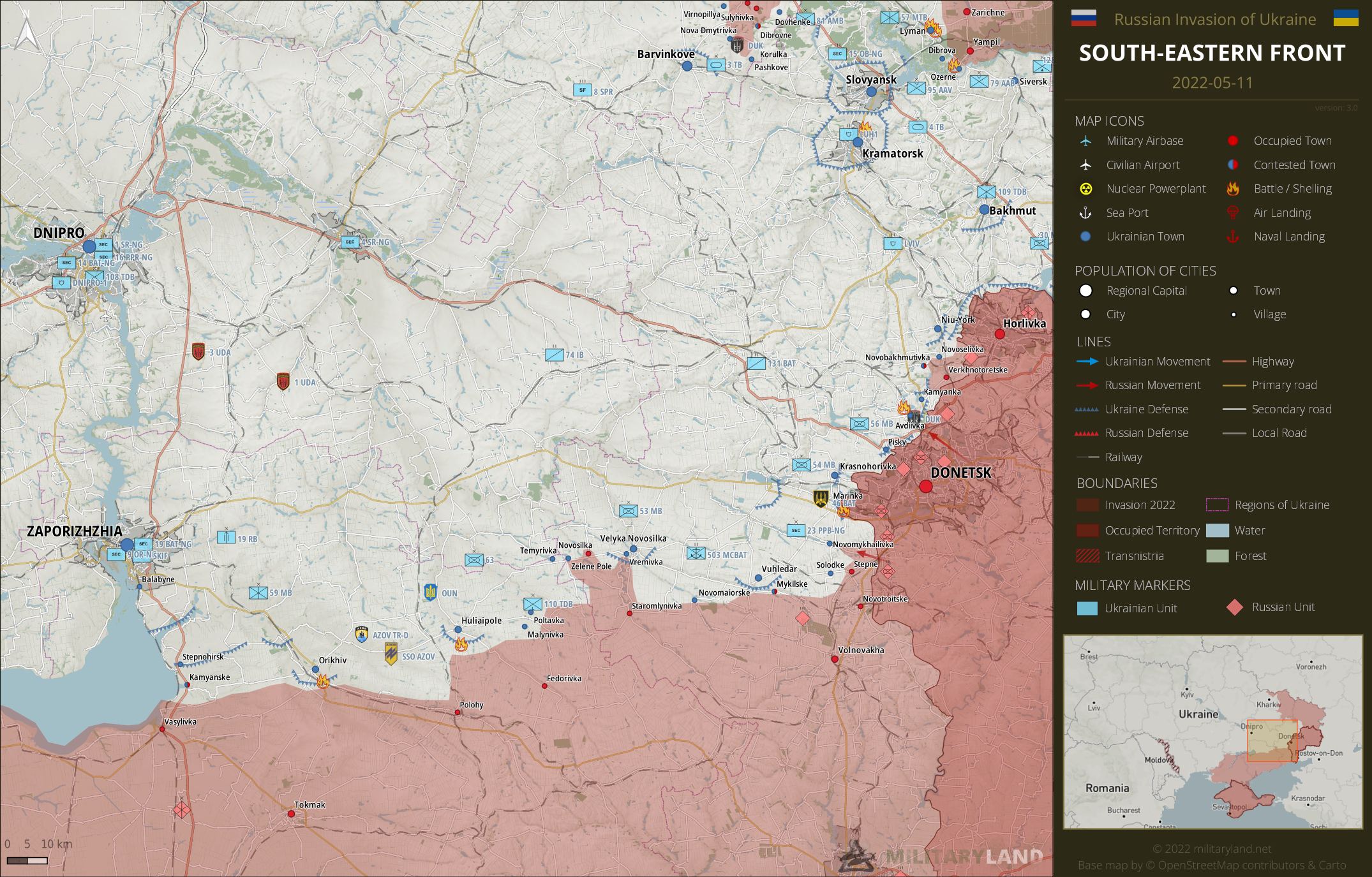 There was no change on the ground in Donetsk Oblast. Fighting continues in the vicinity of Avdiivka. 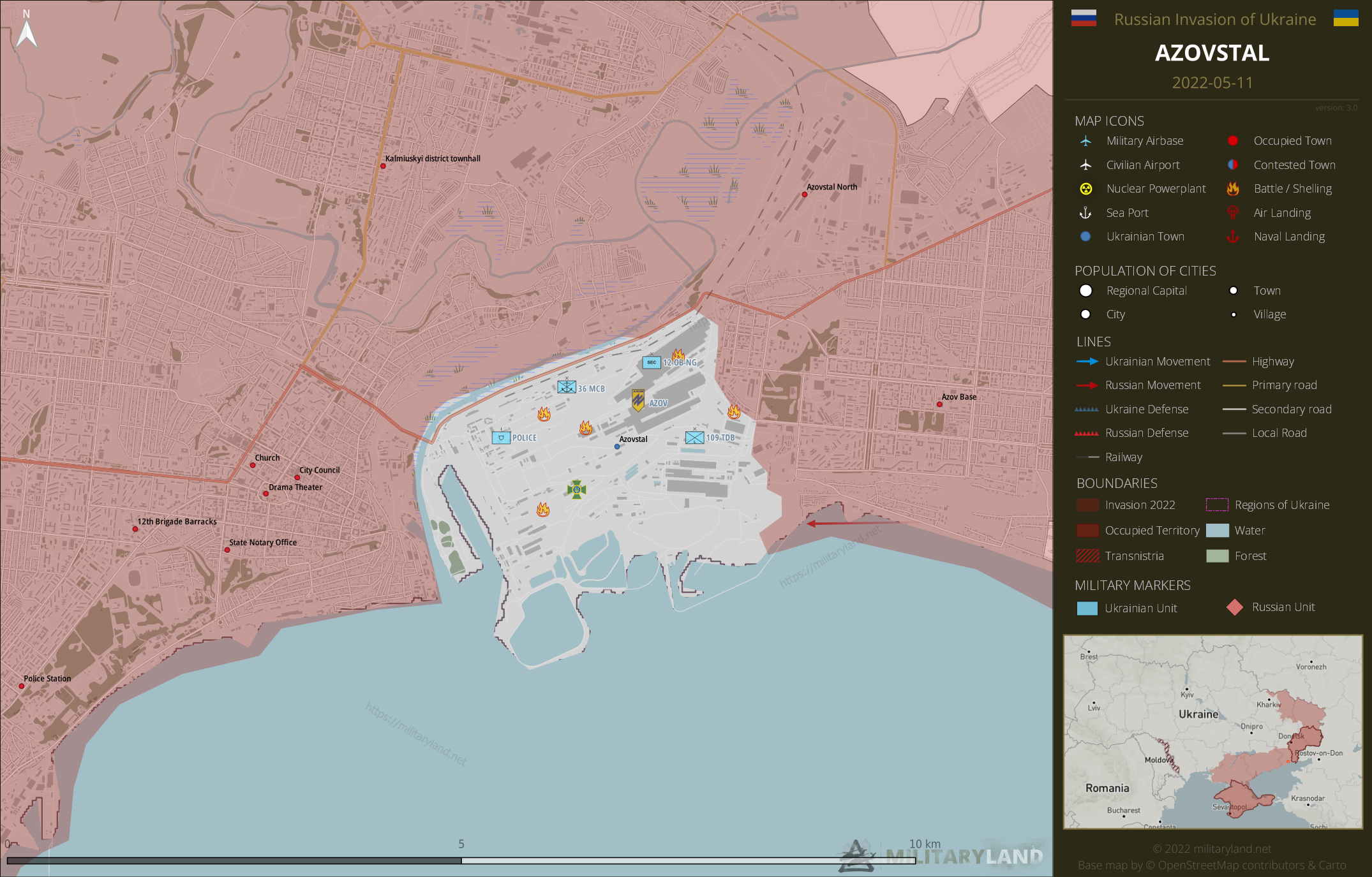 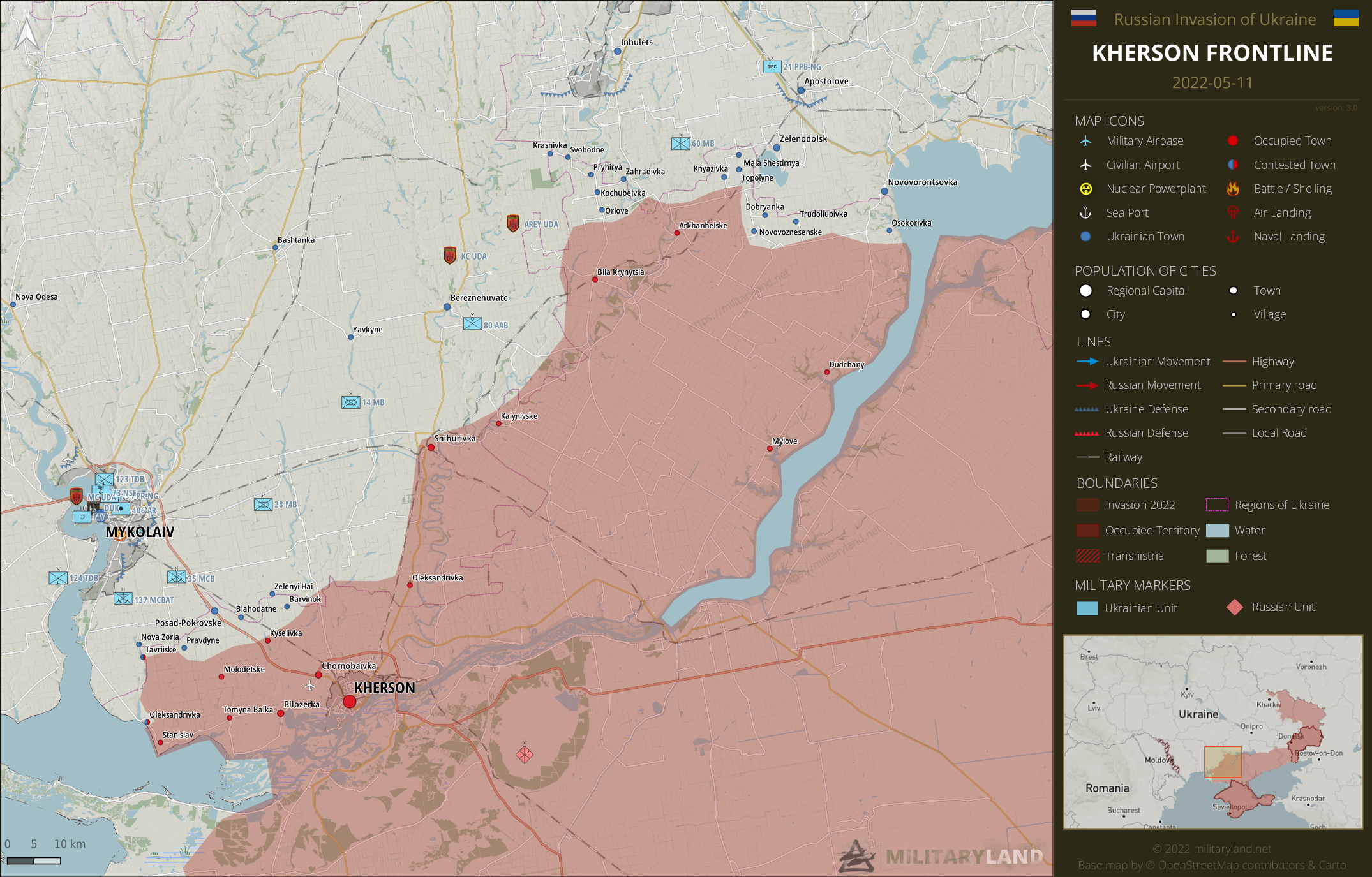 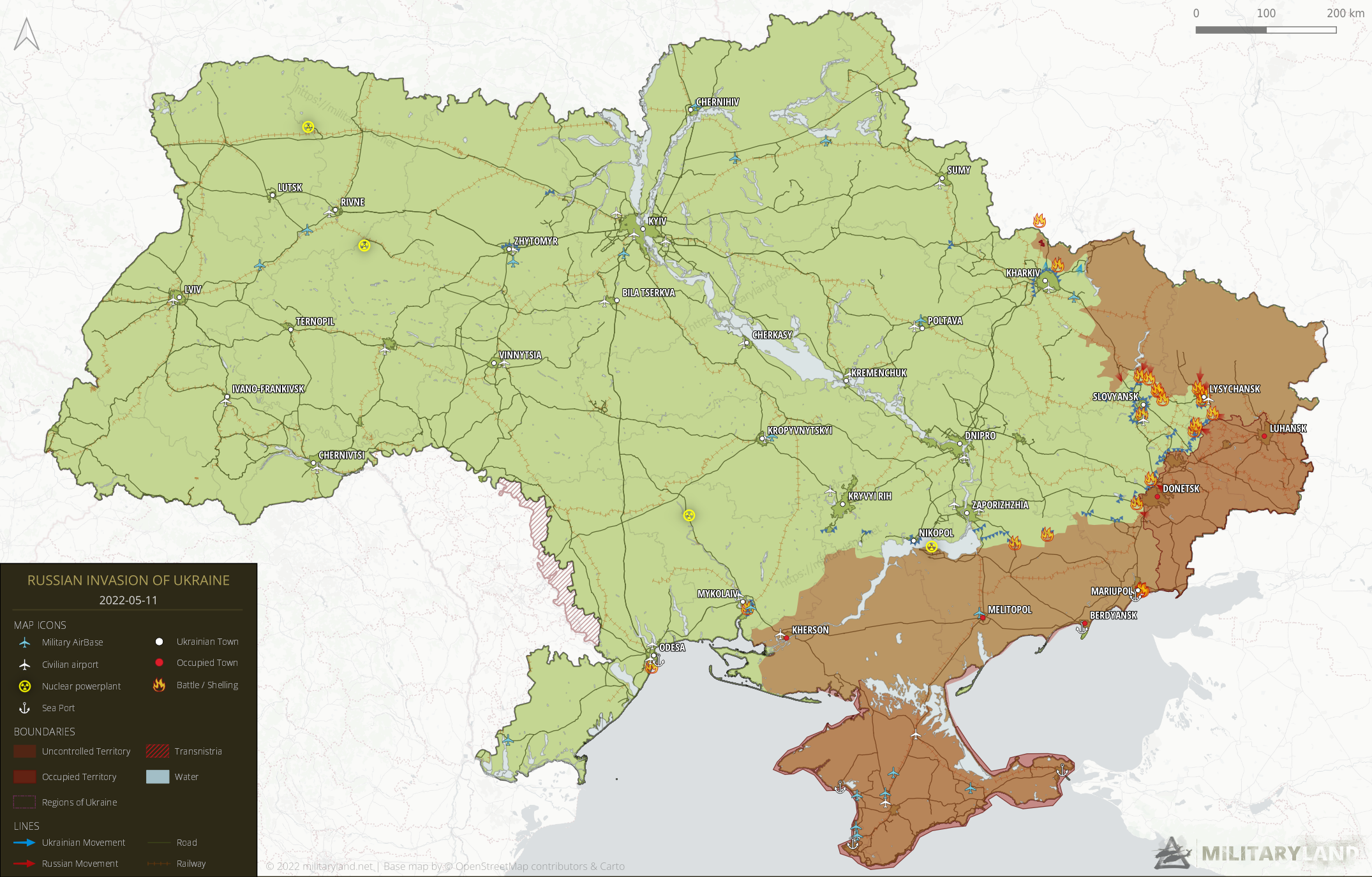 I’m pretty convinced this YRRAL acc is a bot trying different phrases to see which garners the most interaction. Have seen so much random comments written by it which doesn’t make any sense at all…

Thank you for your daily summary！ Yesterday’s shelling near Bilohorivka was impressive. Several Russian pontoon Bridges were broken. I don’t understand why the Russians don’t use air and artillery to clear out the Ukrainian artillery before crossing the river. Perhaps it was pressure from above that forced the commanders at the front to act so recklessly that the tanks and ifVs were blown to smithereens by the artillery. P.S. There is still a lot of… Read more »

I voted for him and many ppl that I know did back in the 2019. He got a popularity vote of 73% mostly because many voted against Porosheko. How Zelensky could be a political from the West if nobody in West knew him or took him seriously before this war? This idea that he is puppet from the West comes from the Russian propoganda. The gave zero idea in Russia what are the free electios… Read more »

Most obvious answer to your question: they cannot clear Ukraine assets, not that they have not tried, causes have been provided many times when discussing about Moscow army being impotent. That being said they want to continue with this unnecessary invasion, pardon, special military operation so they attack regardless of losses as time is not in their favor. I agree that their commanders are not very sharp, supreme commander (Putin) is first to come to… Read more »

I assume you are an American, like me, and hear the nonsense spouted by the likes of Tucker Carlson who claim that Zelensky is a “CIA puppet.” I hear this trash from many of the isolationist types in Republican or conservative circles. I’m a Ronald Reagan Republican; just remember, a true conservative is one who believes in the principles of President Reagan, who would certainly be ALL-IN in the fight against Russian tyranny.

Zelensky is not a puppet, but he is not a qualified president either, he is a good actor. He made a series of bad decisions that led him from one mistake to another bigger mistake. It is internationally recognized that there are few mature politicians in Ukraine.

I don’t know how you can discuss something like this? Zelenskiy is the democratically elected president of Ukraine. If the US wanted to have a greater influence on Ukraine’s policy, Ukraine would have been in NATO a long time ago. Yanukovych was a puppet president of Ukraine. Russia had a great influence on his choice. Ukraine is paying a heavy price today for this traitor. If Ukraine had joined NATO then (and had, in my… Read more »

@Needle Some tweets from this morning say that the RF-Forces crossed the Donets river and are advancing: https://liveuamap.com/en/2022/12-may-general-staff-of-armed-forces-of-ukraine-russian-troops
I can’t read Ukraine nor Russian, I don’t live near the Donets river, so it’s hard to figure out what actually happened, if there were 1,2,3 or 4 crossings and if the damaged vehicles were RF or WUF.

The territory is completely controlled by armed terrorist mobsters from westernmost parts.
This is the moving force and the reason of the war.
They are not controlled by any state structure, despite being loosely assigned to “battalions”
No election or president is legit.
Liberated cities sees ten-thousands strong pro-russian meetings.
The population was terrorized and brainwashed for 8+ years, but its not completely coverted to hasitly invented ukrainian entity.

Climate Change is also occurring in the former Soviet Union. When there were war concerns in the media around 16th to 20th of February, I googled weather Kiev, which had forecast early Spring with temperatures of -1 to +9°C the next 10 days. That made me believe, the Russians wouldn’t be that stupid, and I did not believe in such “fake news”, thus I had been shocked with Putin invading Ukraine. The terrain had been… Read more »

Thanks – Finally magnifying glass is in sync with map on all maps. DON’ touch leave as is.

Not a whole lot of news to spark discussion as of today. I’ll ask something of the war in general: What’s your thoughts on how the terrain affects warfare? We’ve seen how much urban warfare benefits the defenders (example being Mariupol, Kiev, Kharkiv, Chernihiv, Sumy, Mykolaiv). That being said, it would be interesting to see how well Severodonetsk/Lysychansk defends and maybe if Sloviansk is going to be a fortress (if the Russians can reach it).… Read more »

On the open plain, whoever has more artillery, aircraft, and tanks has the advantage. But in the forest, in the cities, marines, paratroopers, snipers and special operations forces show their best side. Therefore, in the Kharkiv direction in a wooded area, Ukrainians are gradually liberating settlements, where they have trump cards. But in the Kherson direction, in the open steppes, it is difficult for them to advance without a significant advantage in heavy weapons and… Read more »

In terms of terrain, certainly the rivers are playing a large role in otherwise open country. The Ukrainian drive north, possibly all the way to the border, used the Donets river to cover their right flank and the river is currently defining the boundaries of the fight in the northwest. And the Ukrainians look to have blown away pretty much a BTG worth of equipment and men as the Russians tried to ford the Siverskyi… Read more »

The Siverskyi Donets is shaping the most important parts of the war in its current stage in major ways, and has been doing so for many weeks now. The Russians fought very hard for Izium, because it’s a crossing point over it, and the Ukrainian side is desperate to retake it, committing vast resources east of Kharkiv to do so. Meanwhile, Russian forces are taking very big risks (and often losses) to cross the river… Read more »

The most fundamental doctrine of modern war is this: • What can be seen – can be hit. • What can be hit – can be killed. That’s really all anyone needs to understand about modern combat. Given the kinds of weapons and surveillance capabilities in the hands of the Ukrainian military – the Russians would be smart to avoid any World War II style mass armor formation combat over the steppes of southern Ukraine.… Read more »