Ukrainian forces continue to successfully push Russian troops away from Kharkiv. Russia’s artillery shelled several settlements near the border in Sumy and Chernihiv Oblast, and the army has made small gains in Siverskyi Donets area.

Belarus has deployed special operation forces on the border with Ukraine. 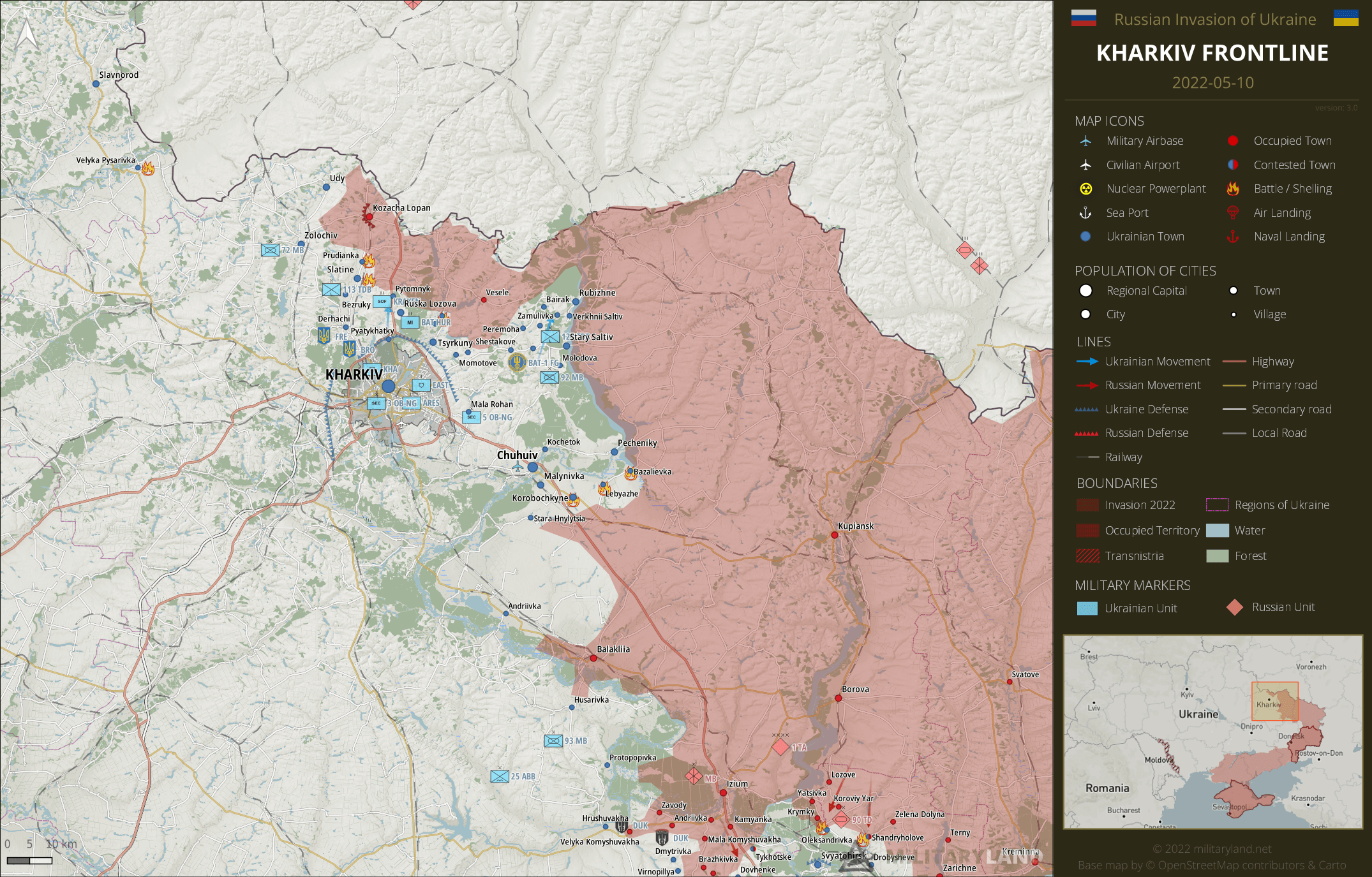 Ukrainian forces liberated the settlement of Pytomnyk and the Russian army has reportedly begun to withdraw from the Kharkiv area across the border back to Russia. According to unconfirmed information, forward Ukrainian elements have already reached the border in the area of Bairak. 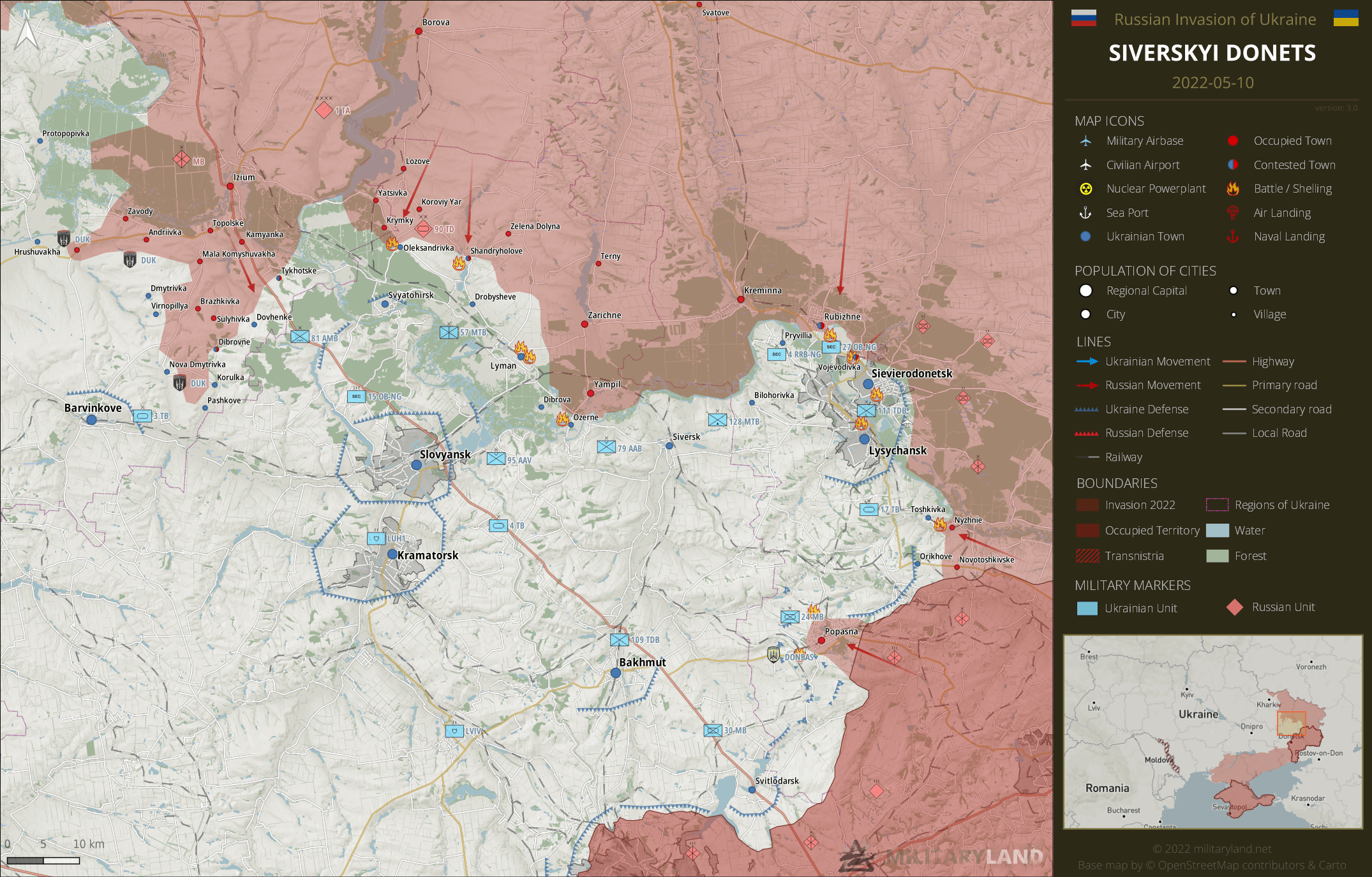 Russian forces captured the remaining part of Velyka Komyshuvakha, Ukrainian troops withdrew towards Hrushuvakha and Barvinkove. The situation in the vicinity of Oleksandrivka remains complicated, but Ukrainian troops are holding the line.

Ukrainian defenders successfully repelled attacks on Toshkivka and Orikhove. The battle continues in Rubizhne, Vojevodivka and in the vicinity of Popasna and Lyman. 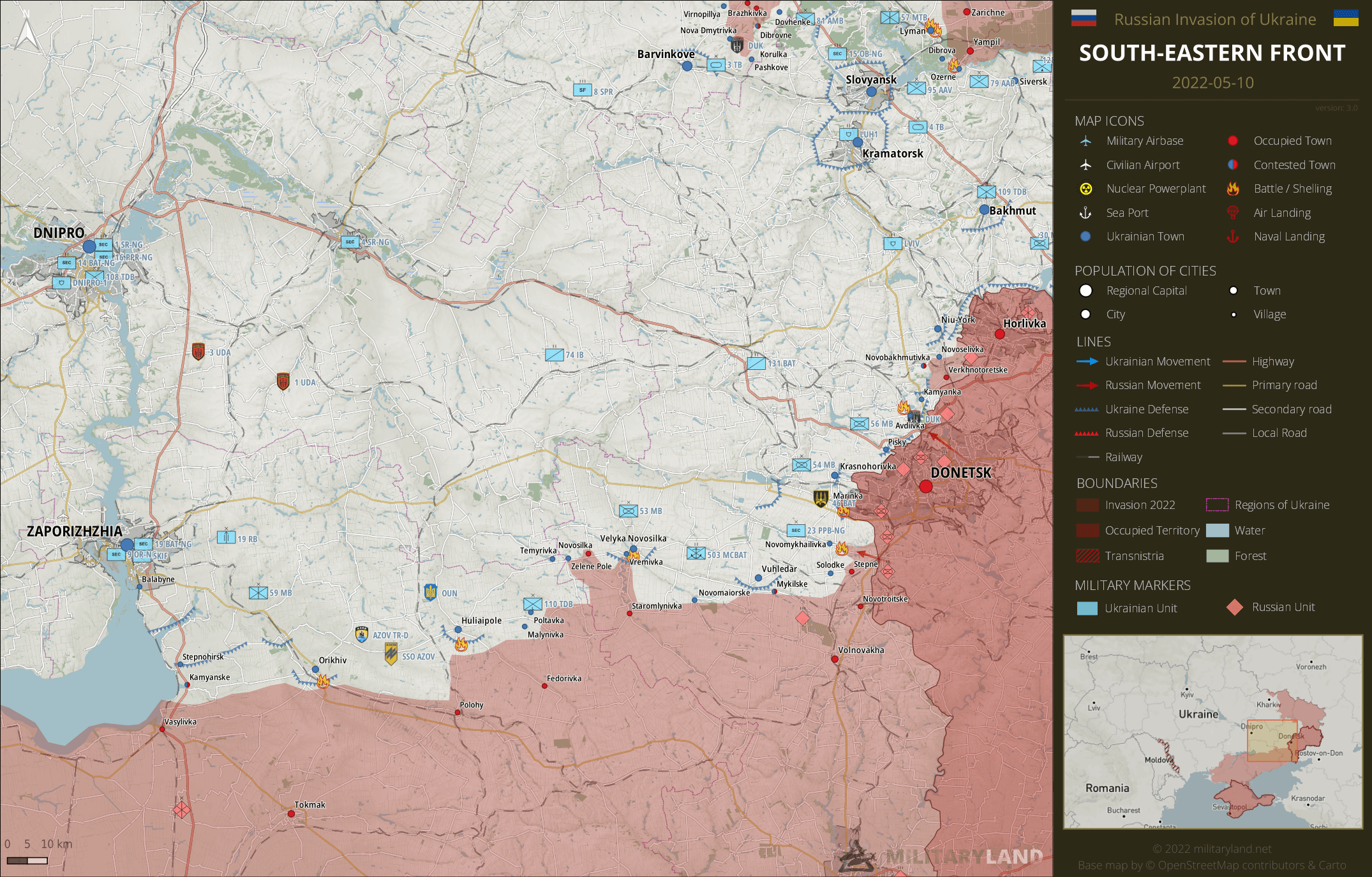 Ukrainian forces successfully repulsed Russian attacks in the direction of Avdiivka and Kamyanka. 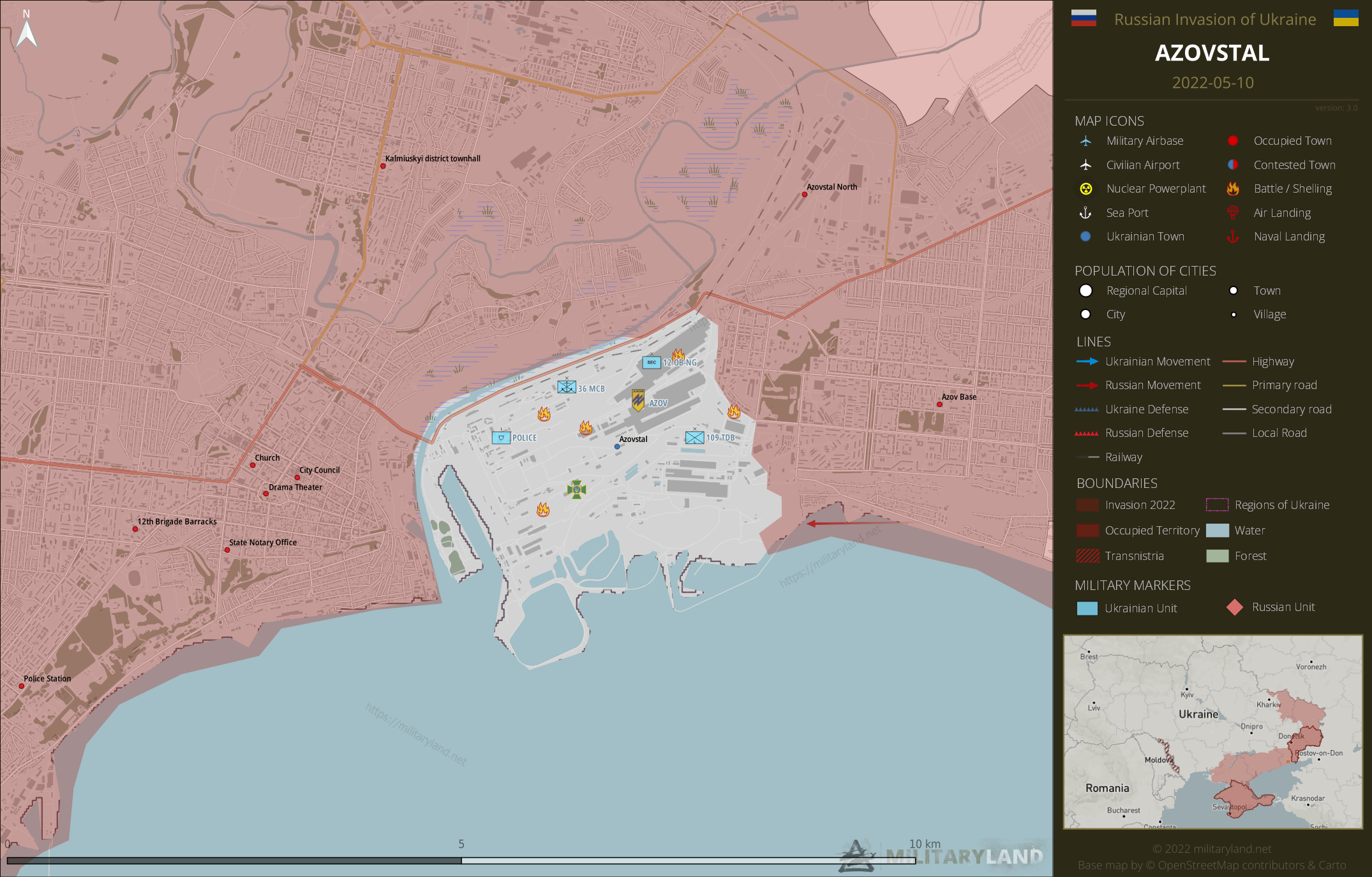 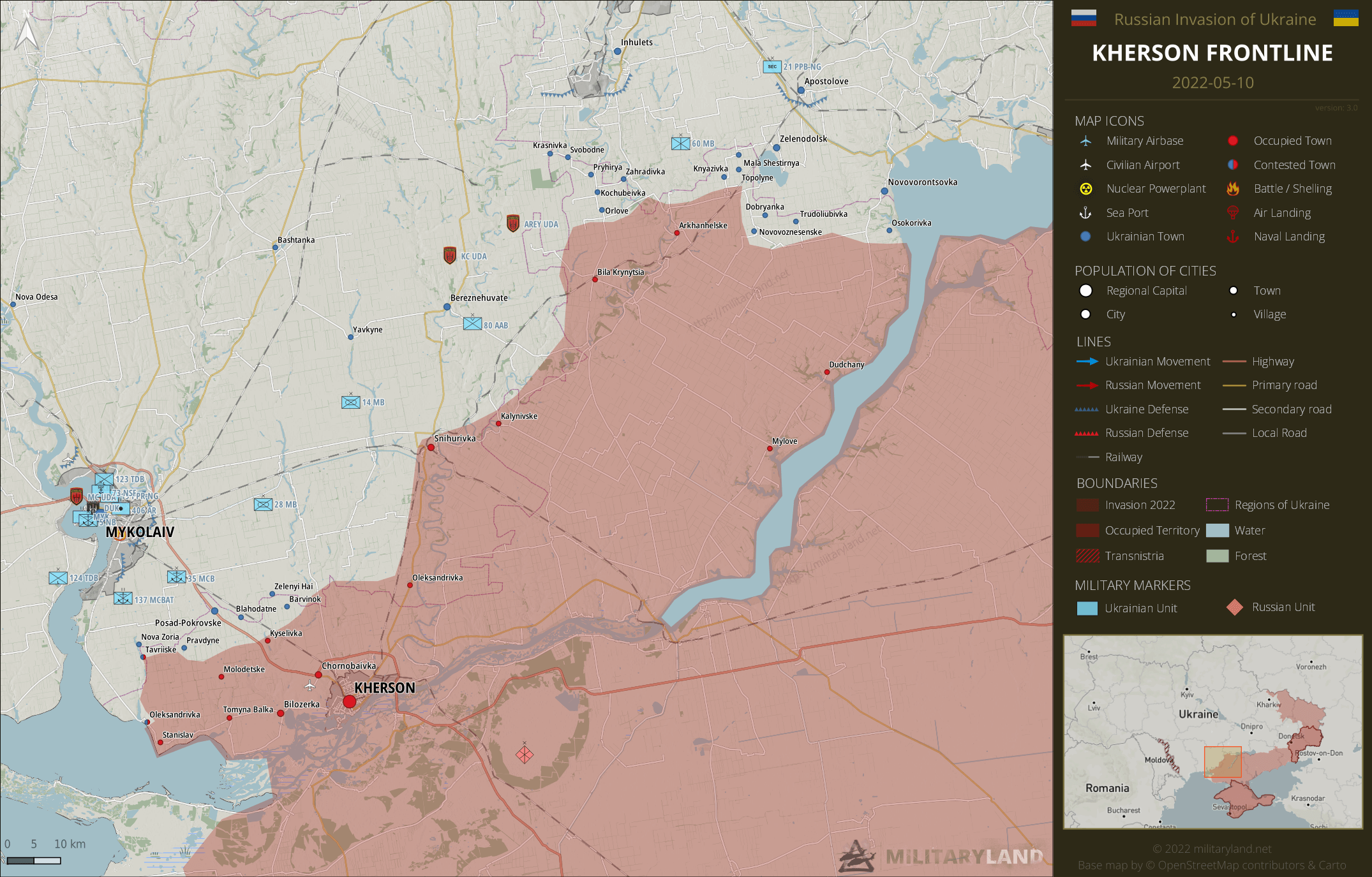 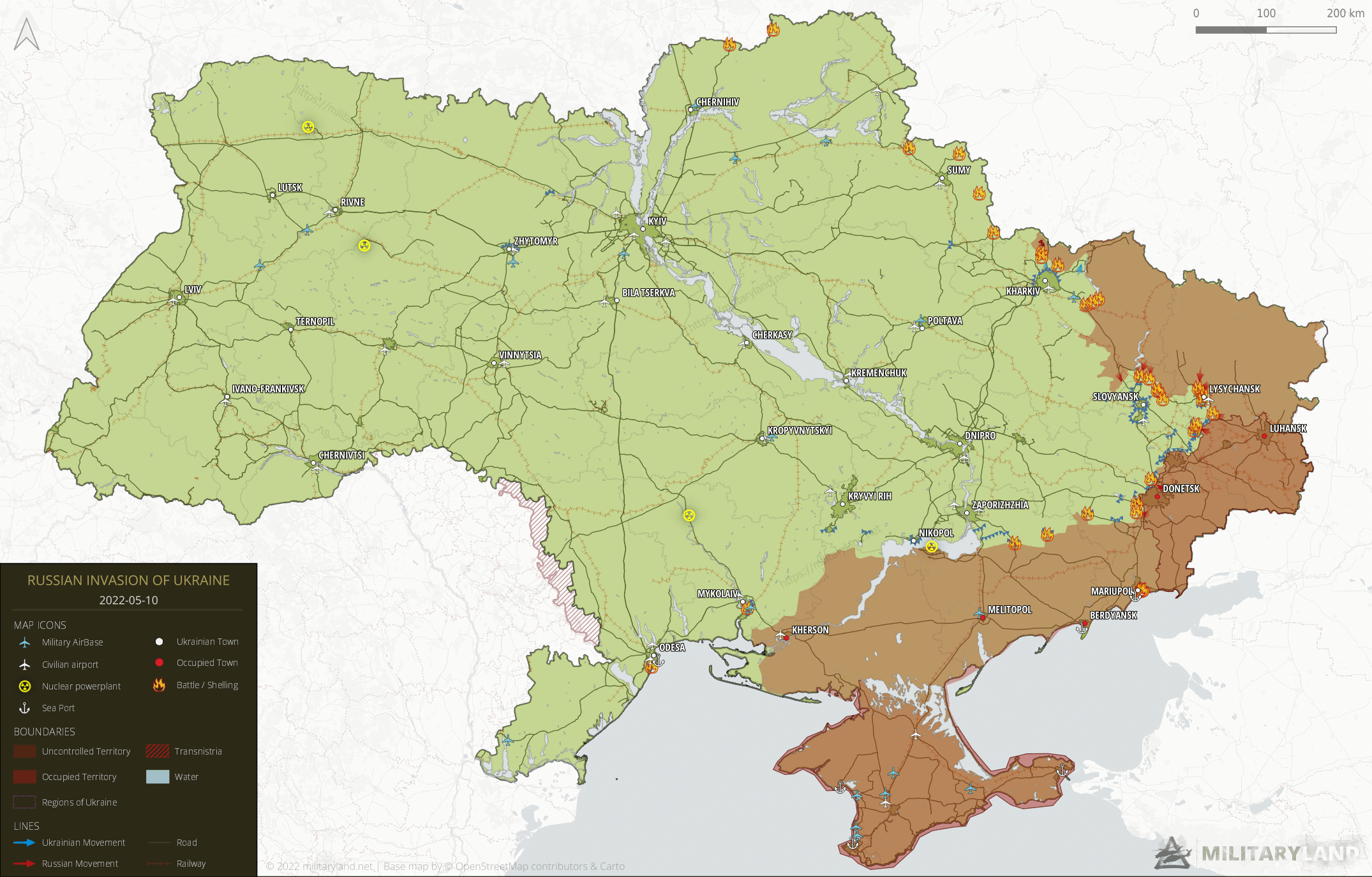 There is information the Russians have taken Rubezhnoe, Zarya, Pivdenne and Voievodivka, all near Severodonetsk. Can anybody confirm this?

Looks like the war is going to get slow, i wonder if time’s on Ukraine or Russia’s side

As this is the much ballyhooed Russian offensive a “slow” movement of the front is plainly a disaster for Russia. Consider that when you see any of the dozens of reports saying, “repulsed Russian advances” they are leaving bodies and equipment on the field. Ukraine has barely begun to employ the big Western weapons and the U.S. is about to explode the amount we’ve been sending. Russia’s army is degrading. Ukraine’s army is getting stronger.

Oh, you meant the Border of Sumy Oblast…

Got me confused for a moment.

This one, 8km from rus border https://goo.gl/maps/aVvfaTJELuZ8wzP57

Thanks, sometimes I am just blind.

Thank you for this website, it’s been a great source since the start of the war. I just have one comment – when I scan my mouse over the map, the part of the map showing is nowhere near to the part where the mouse is pointing. Sometimes I’m way off the map to see some parts on the edges. Maybe it’s just me, but thought you should know in case there’s a technical glitch.… Read more »

For every cruise missile that Russia drops into Kyiv or Odessa or Lviv, Ukraine should send a cruise missile into the Kremlin which is only 450 km away.

I don’t know where Popasna’s Russians are going to attack. Perhaps they would move north to attack Lysychansk, but that seemed too difficult.
If this is WORLD War II, the Soviets would have poured troops into the breach to make the breakthrough.

Assuming it was a breech and not what the Ukrainians said… a strategic pull back because there are no more good defensive structures. Opposite of a troop collapse and breakthrough

Recent attempts have been to attack Bilohorivka, with up to 4 Russian BTGs dedicated to the operation. If they capture that village, they will be close to surrounding Lysichansk and Severodonetsk. Push north from Popasna .

Our military leaders get grill about,issues related to the defense of the US,this could determine US support,for Ukraine if it is lost cause,they were on the hot seat about Afghanistan,a past US foreign policy,Putin GRU will operating Intel for Russian inside Ukraine,instead of the FSB Google US Military Assement Of Ukraine War Google Putin GRU Ukraine

And what is the worst going to look like? More tanks getting hit by the Javelin? More soldiers dying when cheap Chinese drones drop a bomb on them? Or the precision M777 Howitzer picking off their tin cans one by one?

Nuclear bombs, although that would hopen a can of worms for Russia, they would lose any kind of support both internationally and at home.

The US doctrine in is too decapitate the leadership of it adversaries,that was doctrine in Iraq and Afghanistan,Putin fail at this, objective in Hostomel,when he fail too take the airport,north of Kiev, Ukraine failure to take out this command and control military base in Belgorod,will be continue fatal too Ukraine, Ukraine has a 20 day supply of fuel , Russian has knocked out Ukraine ability to refine product for it military, civilian and agriculture need,taking… Read more »

Why are Ukrainian not being held, accountable, Ukrainian portray too the world,that Russian are solely behind their misery,when Ukrainian are openly collaborating with Russia, against their own country,that is even worse

This has been on my mind. Belarus was rumored to enter the war, but then a 40km convoy of trucks that took no part in the fighting and quickly disappeared was in the news. Assumably the convoy was out of fuel or all had flat tires. But one theory was that Belarus manpower was driving vehicles not meant to participate, but to bluff. I think due to the fragile domestic situation in that country that… Read more »

Lots of reports lately that there is fighting in Lyptsi, or it has already been abandoned by the Russians. The General Staff may still be mum, but there is confirmation that the towns to the south have been recaptured: “Tetiana Apatchenko, press officer for the 92nd Separate Mechanized Brigade, the main Ukrainian force in the area, in the country’s east, confirmed that Ukrainian troops had in recent days recaptured the settlements of Cherkaski Tyshky, Ruski… Read more »

Another thought to add, what do you guys make of the Belarusian units coming near the border? Are their numbers big enough to cause problems with Ukranian units overextending? And is their military capable of having any success on the battlefield? They may be a very undisciplined army, but just the fact that they’re there may draw Ukranian units away from the eastern front.

Putin must be putting pressure on Lukashenko. Hard to believe he pushes his army into this unless Putin really calls in his debts. By reports I’ve seen Belarusians really don’t want to go to war in Ukraine so defying Putin would be risky but so would sending them in. So maybe they’re just demonstrating to tie up Ukrainian forces? It might be a nothingburger if that’s the case because it’s a fair bet Ukraine is… Read more »

Lukashenko knows that if it attacks Ukraine and in the case that Ukraine wins the war with Russia, then Belarus will be the next on the chopping block. Ukraine can send a column of highly specialized troops to pick Lukashenko off and bombard his palaces until he is deposed.

Belarus shoudl have tried to invaded Ukraine during the first part of the war, to support Russia offensive on Kiev. Now, sending troops without Russia troops would be useless and stupid. it seems that Belarus Did not invaded Ukra, despite Putin request, because of internal resistance and even some politics opposition. The clear risk for Lukasenko is to start a new local revolution. Remember that it was very hot just a few months ago. So… Read more »

The Belarusian army should it enter the fray will be slaughtered by seasoned harden better trained better equipped Ukrainian forces who aren’t going to play around with these lite weights. Body bags and dog tags is what will be sent back home to Belarus in humiliation.

Another thought – what Poland will do if Belarus invades Ukraine near Polish border? They might join in the theater.

Yes, I was wondering was Poland doesn’t do a bit of sable rattling to make Belarus nervous. Is it because they do not want to escalate tensions or would it involve NATO too much?

Unless Belarus attacks Polish troops, with more than one accident occuring, i doubt just a clash will be enough to cause war, then no war will happen and if it happens then Belarus is pretty fucked, doubt Russia would join in that as that would spell doom for them, they’re not even remotely prepared for a clash with NATO.

If they move on Ukraine, we should hit them ourselves (U.S.).

It turns out Russia isn’t Russia either!

I think it’s nothing more than virtue signaling to show he supports Putin, Lukashenko has to show off he’s a good dictator ally in reality he has been sending mixed messages about the invasion and has problems since he is not very popular in Belarus to begin with. Allegedly he sent army to participate in the invasion at start but they refused, don’t know if this is true but I would not be the least… Read more »

I don’t see Belarus attacking. Their army is said to be much more shambolic than Russia’s, if they attacked they’d be mopped up pretty quickly which Lukashenko knows will leave him very vulnerable to opposition forces within Belarus. If Belarus breaks out into civil war that would leave Putin in a very tight spot, does he stay in Ukraine or would he be forced into Belarus? If Belarus falls to Western-friendly opposition forces Putin would… Read more »

What may be next for the Ukrainian units liberating the area north of Kharkiv? After the area west of the river is taken, do you suppose they move those men in a different location to help in other areas? Wondering if the liberated area can serve as a place for artillery to strike supply lines around Kupiansk while the men move in a more-needed position.

Yeah, they move them. Those are forces capable of assault. They’ll fortify everything west of the river mostly with territorials and then move on to another target.

They should strike to the east with a view of interdicting supplies through Kupiansk. That would cause the entire offensive around Izium to collapse. A significant threat against that supply route may cause many russians to hightail it back to Russia before the door closes behind them.

Or maybe they should cross the border and attack Belgorod?