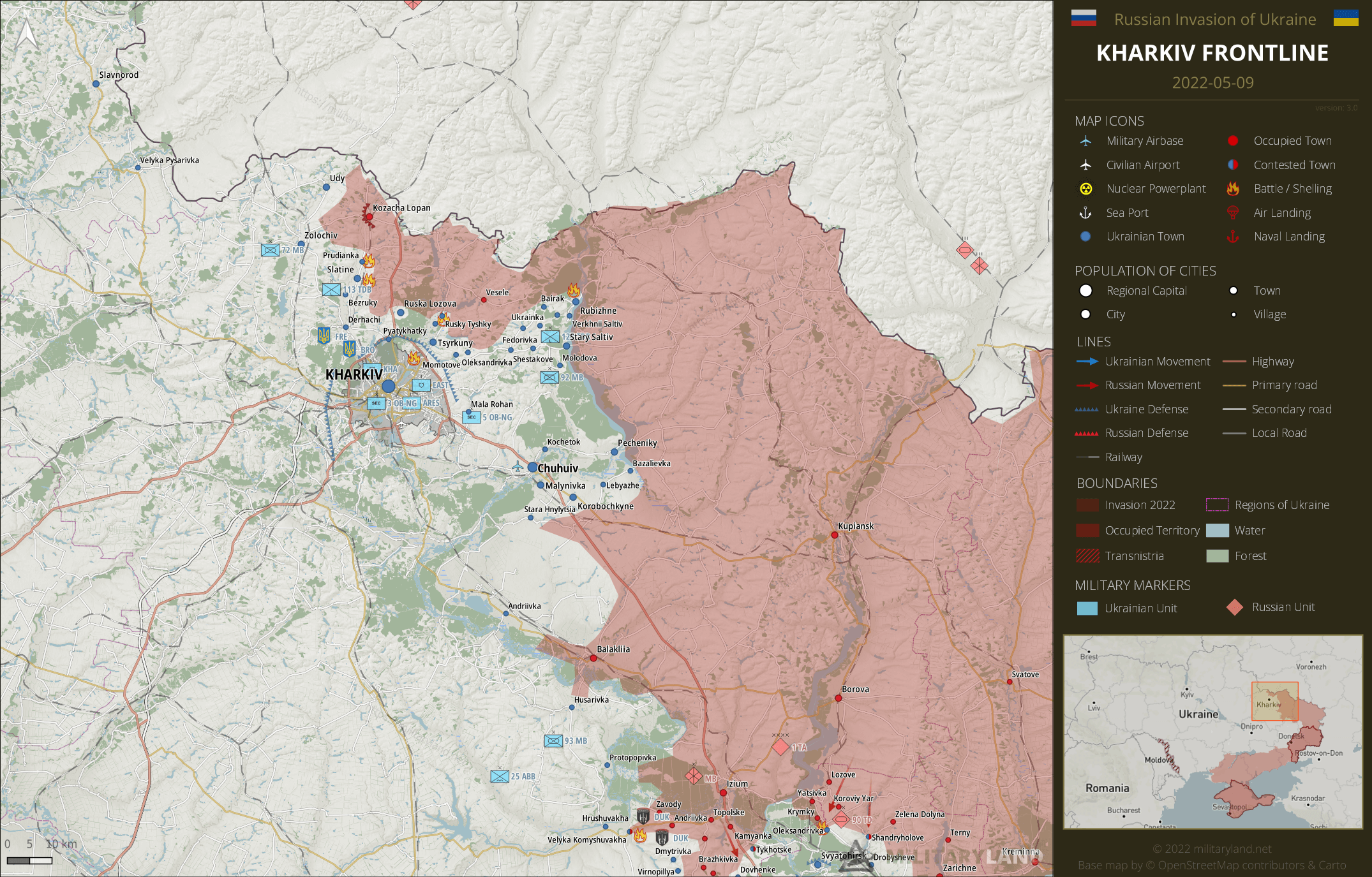 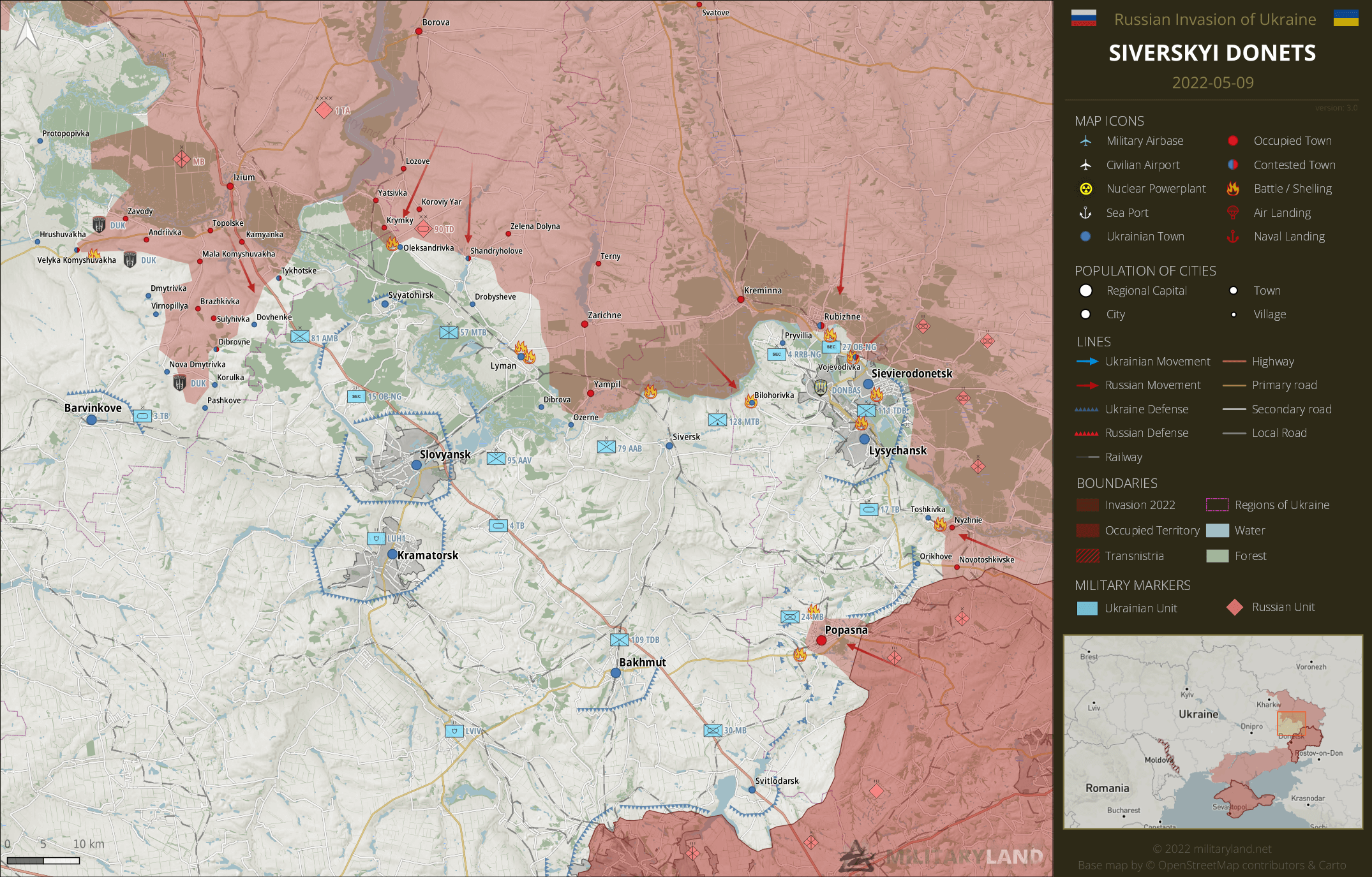 The fighting continues in the vicinity of Oleksandrivka and Lyman. Russian reconnaissance elements crossed Siverskyi Donets river and entered Bilohorivka. Ukrainian defenders managed to push them back in the afternoon and reportedly destroyed a nearby pontoon bridge.

Russian forces attempted to capture Vojevodivka, but the attack was repulsed. However, the enemy has captured Nyzhnie in the east and advanced towards Toshkivka. 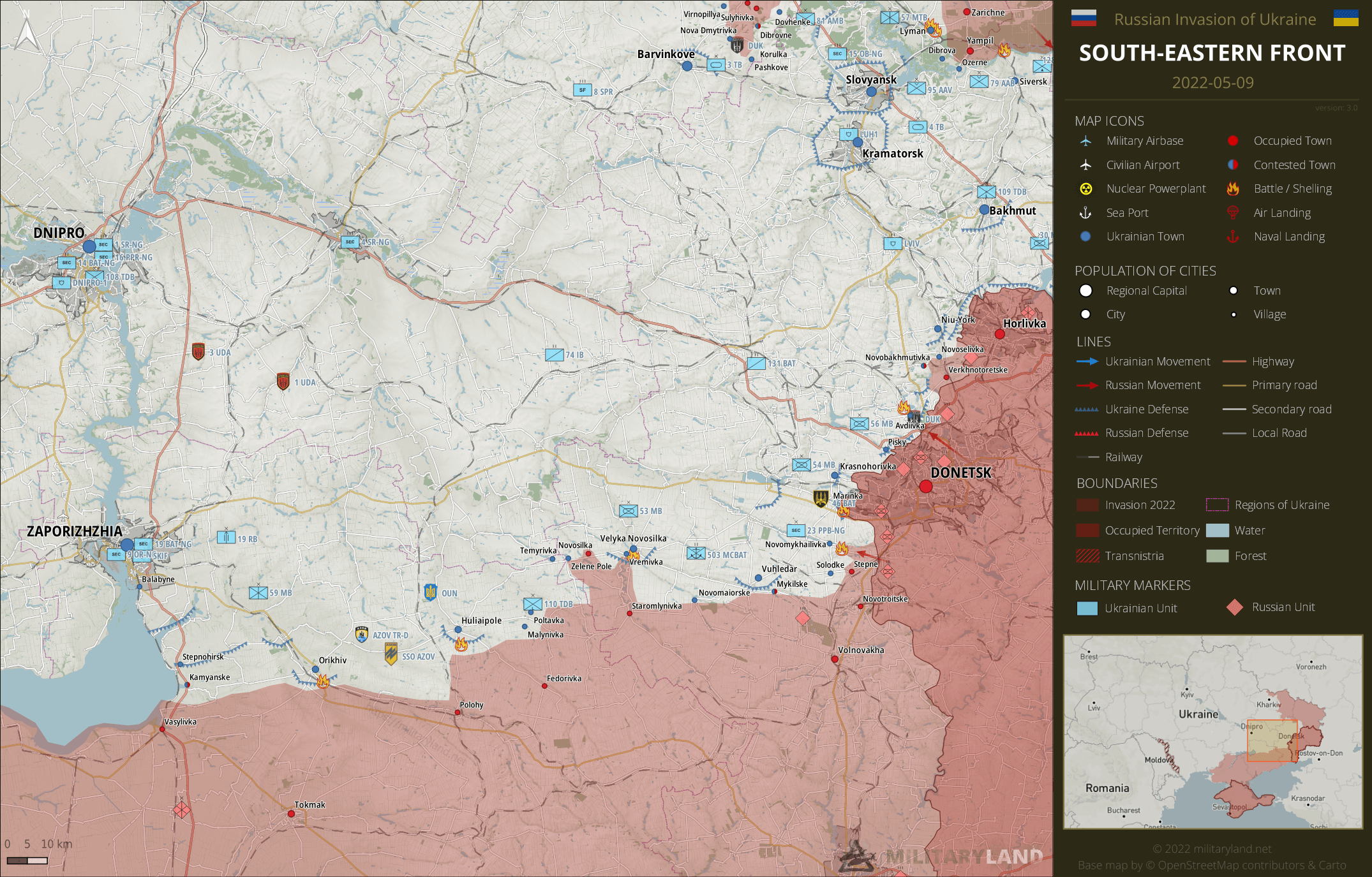 Ukrainian troops repelled attacks on their positions in the vicinity of Avdiivka and Novoselivka. 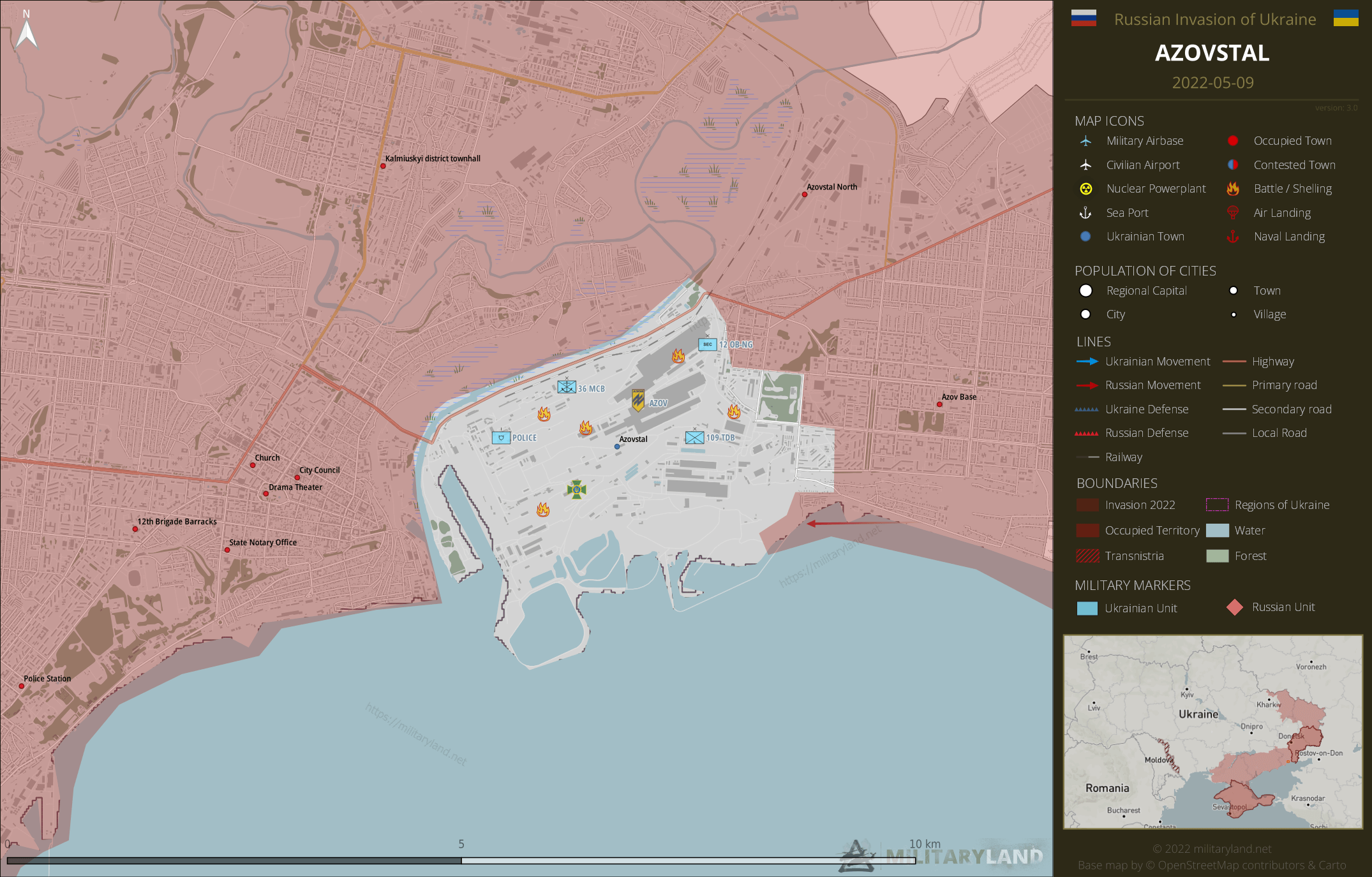 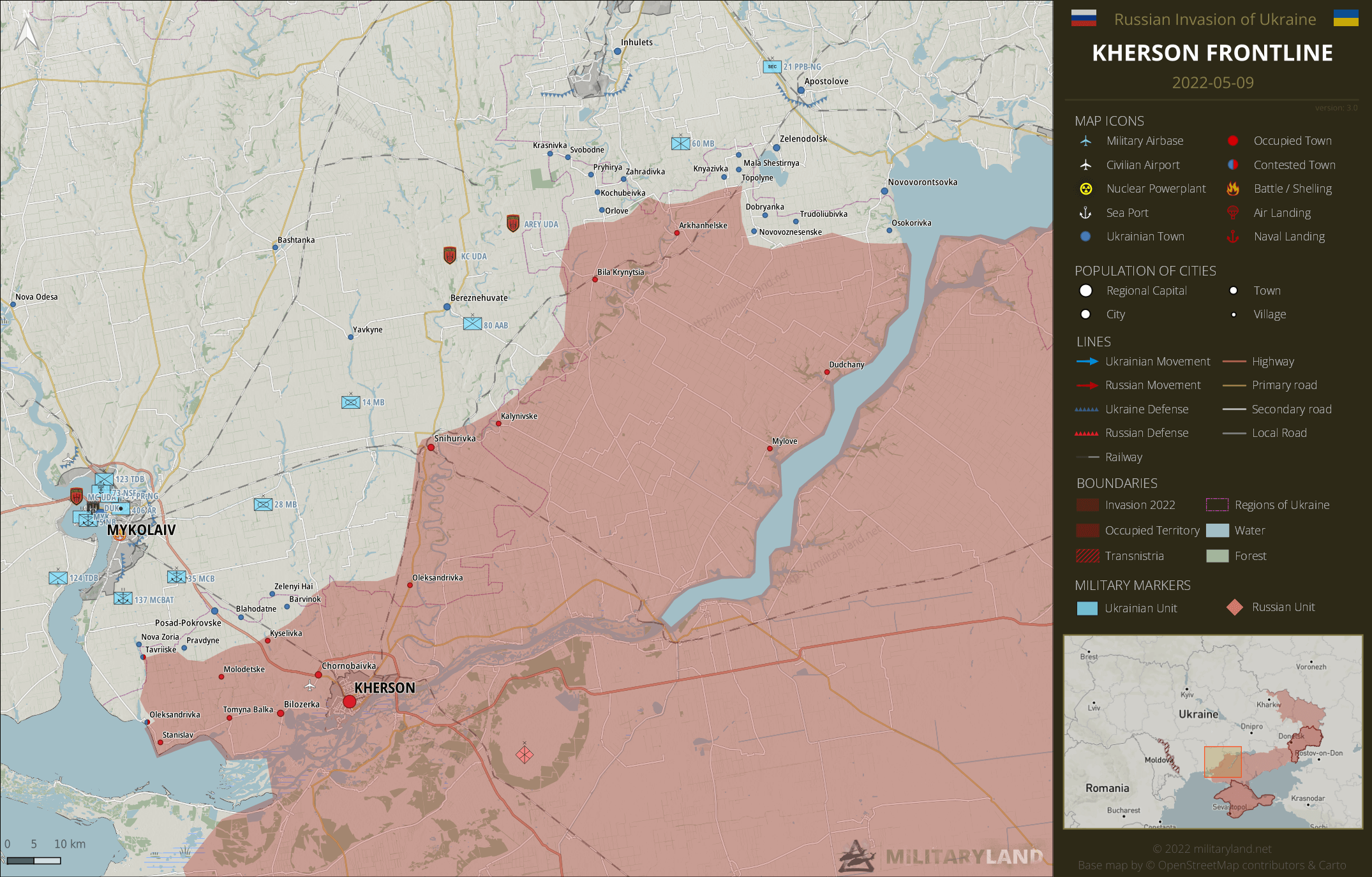 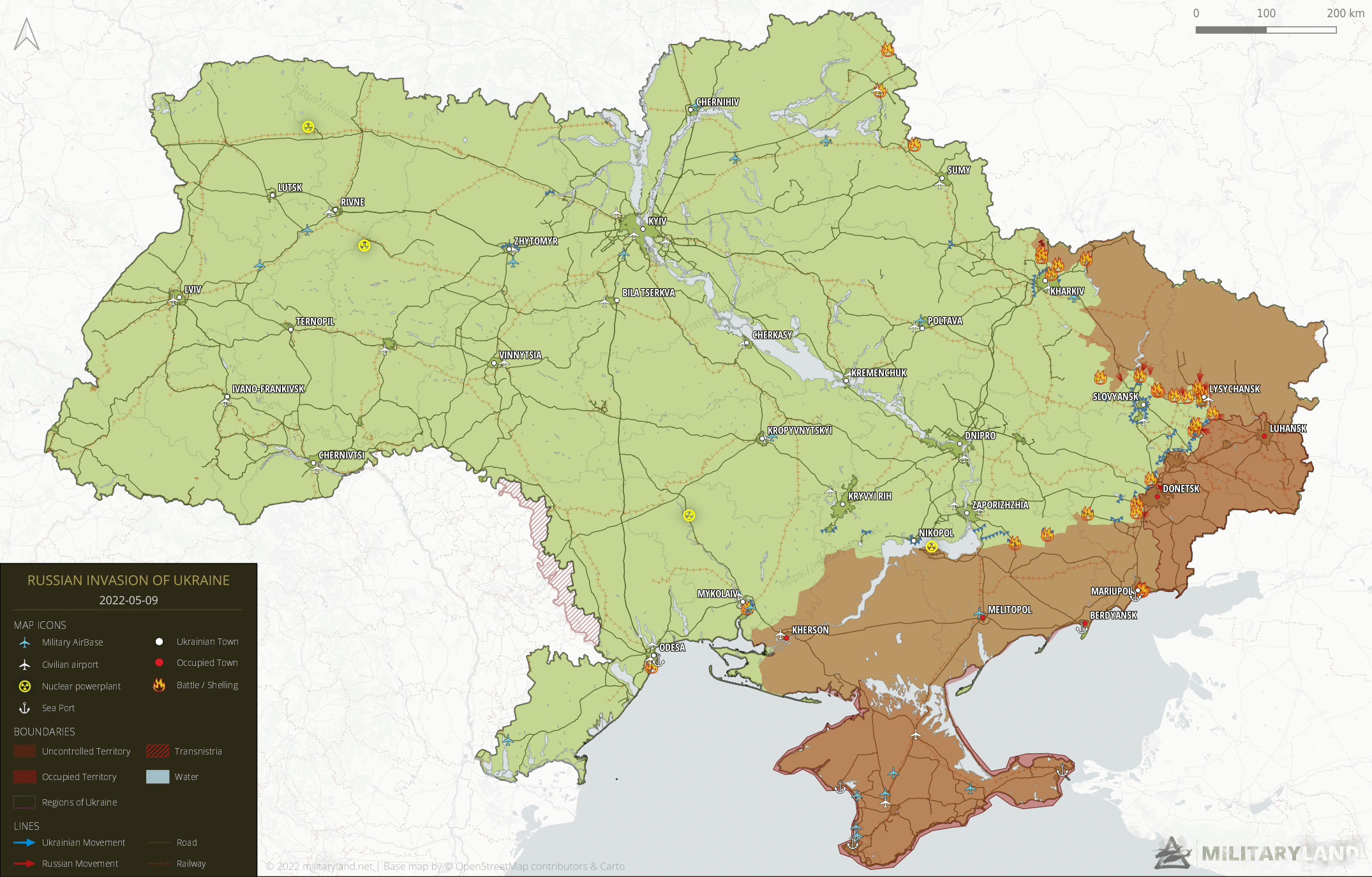 Nathan Ruser reports that Velyka Komyshuvakha has been captured by the Russians. Couldn’t find any other source for this yet, though. I would appreciate your respective comment, Jerome, in your upcoming May 10 Summary.

It’s an extremely interesting situation developing in the Kharkiv area. Even as the eastern part of the battle is a cauldron of attrition, chewing up Russian BTGs as Ukraine falls back from one fortified position to another, the Ukrainians are working on their ability to drive the Russians backwards in the north while threatening the right flank of the Izium axis. Two weeks ago I wondered if they could put the river on the right… Read more »

If Russia wants it can end the whole funny offensive just coming down the border again, so eh, those Kharkov offensives will generate nothing in the end and the ukie army will still get grinded

That’s not terribly convincing but thanks for your input.

Thats exactly the purpose of Ukr, to push Russia outside.
If Russia come back to belgorod without fighting, it would be perfectly great for Ukr….
The best would be that they do the same everywhere.

Shelling Belgorod… I wonder if that would actually be doing Putin a favor, on balance. If he were looking for something to galvanize domestic support (which he is), bombarding a Russian city would be throwing him a PR lifeline. Even if artillery strikes on Belgorod were eventually possible, some of the other thoughts I see here make more sense. Force RUS to defend Kupyansk. Think of the very limited and very hard-won RUS gains around… Read more »

Looking at the fighting today though it does seem like they’re more intent on pushing everything that’s Russian west of the river north across the border. So who knows if they have anything to try to drive east for a long while yet. Could definitely be wishful thinking on my part to think they’re anywhere near ready for that. Tense days.

There are already reports from UKR MoD that Russian units are diverted from Izyum salient north to Kupyansk. Already happening.

or.. they could go and take Vovchansk… which would cut the Kupjansk-Izjum road completely… or just place roads and railroads out of Vovchansk under artillery fire…

Yeah, Vovchansk is the other obvious target if they have the juice to keep driving forward at this point. But all of the bridges from Stary Saltiv north have already been blown. The Ukrainians appeared to be trying to get to that last one before the border in time but it has been blown. I’m not sure if they have the logistical ability to throw a bridge across and cross a strong force under fire.… Read more »

Taking Vovchansk would cut them off from Belgorod, but not from Valuyki. Definitely seems worth doing, though. I don’t know how much of their supply needs can be re-routed thru Valuyki. That might be difficult and slow for RUS, although I’m they’ve anticipated that possibility.

It would be the first time the Putinists have anticipated anything so far, but I suppose they might break the habits and training of a lifetime.

yeah? with what force? conscripts they stationed there??? do you really think 18years old guys with few months of training would stand a chance where contract soldiers failed??

Putin delusional,using the US as scrapegoat for his failure,when Putin found himself in a hole ,in Ukraine,he should stop digging,or Putin will dig his own grave with his own teeth

Putin is just doing what his great hero Stalin would do. Just throw more people and machines at it and damn the consequences. Their lives are immaterial to him. You know, kind of like state property.

… but we learnt that Putin’s doomsday plane, the one made to flight during a “nuclear war”, didn’t flight during the parade because of “poor weather” over Moscow…