Russian army continues to hit key infrastructure in Ukraine. On Sunday, the missiles targeted Mykolaiv and Odesa. The enemy also shelled a few Ukrainian settlements near the border in Sumy Oblast.

Ukrainian Bayraktar TB2 remains to hunt Russian forces stationed on Zmiinyi Island. This time, a Russian Mi-8 helicopter was destroyed while the soldiers were dismounting. 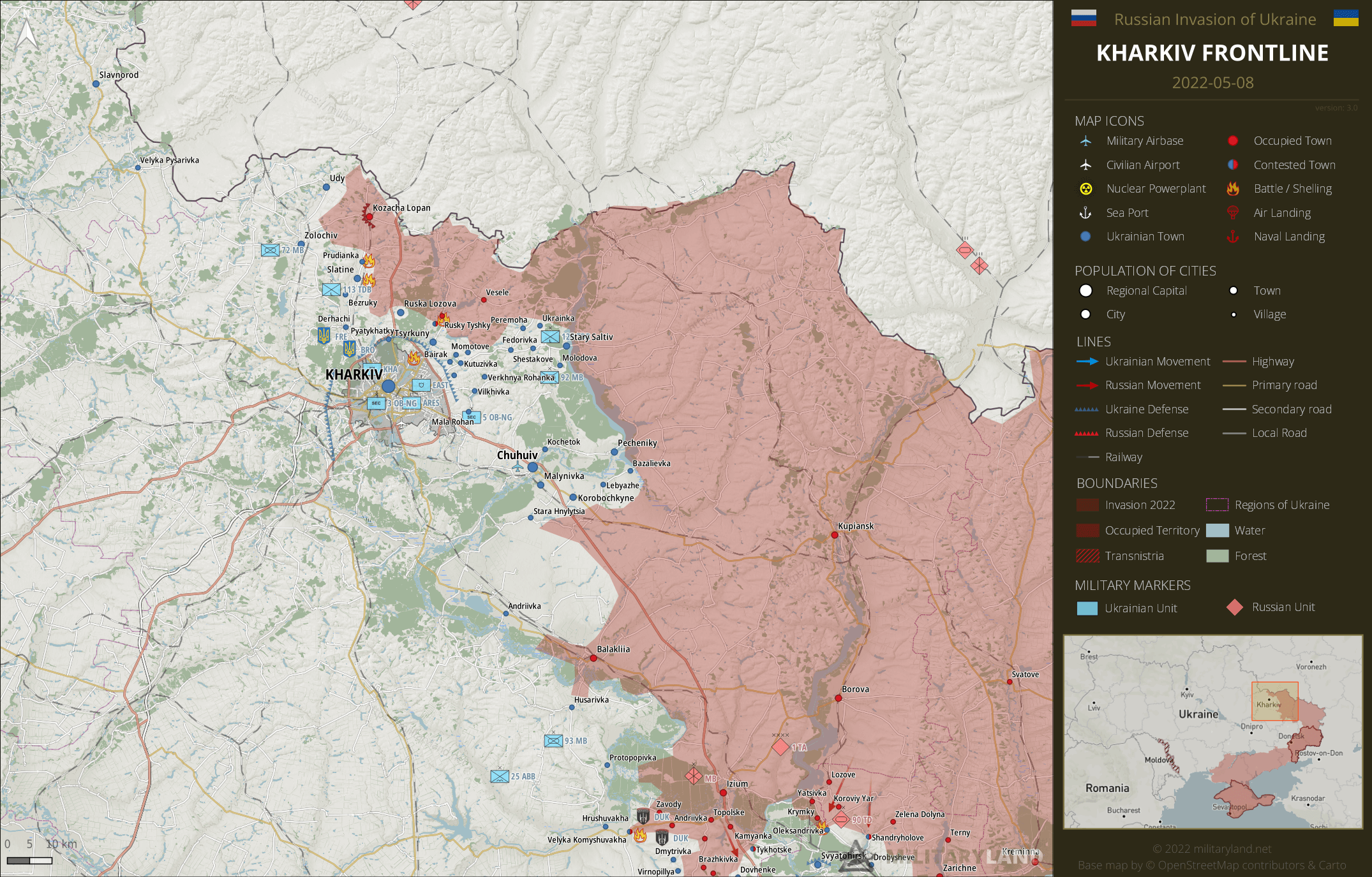 Ukrainian command reported that Russian forces were spotted building trenches in the vicinity of Kozacha Lopan. 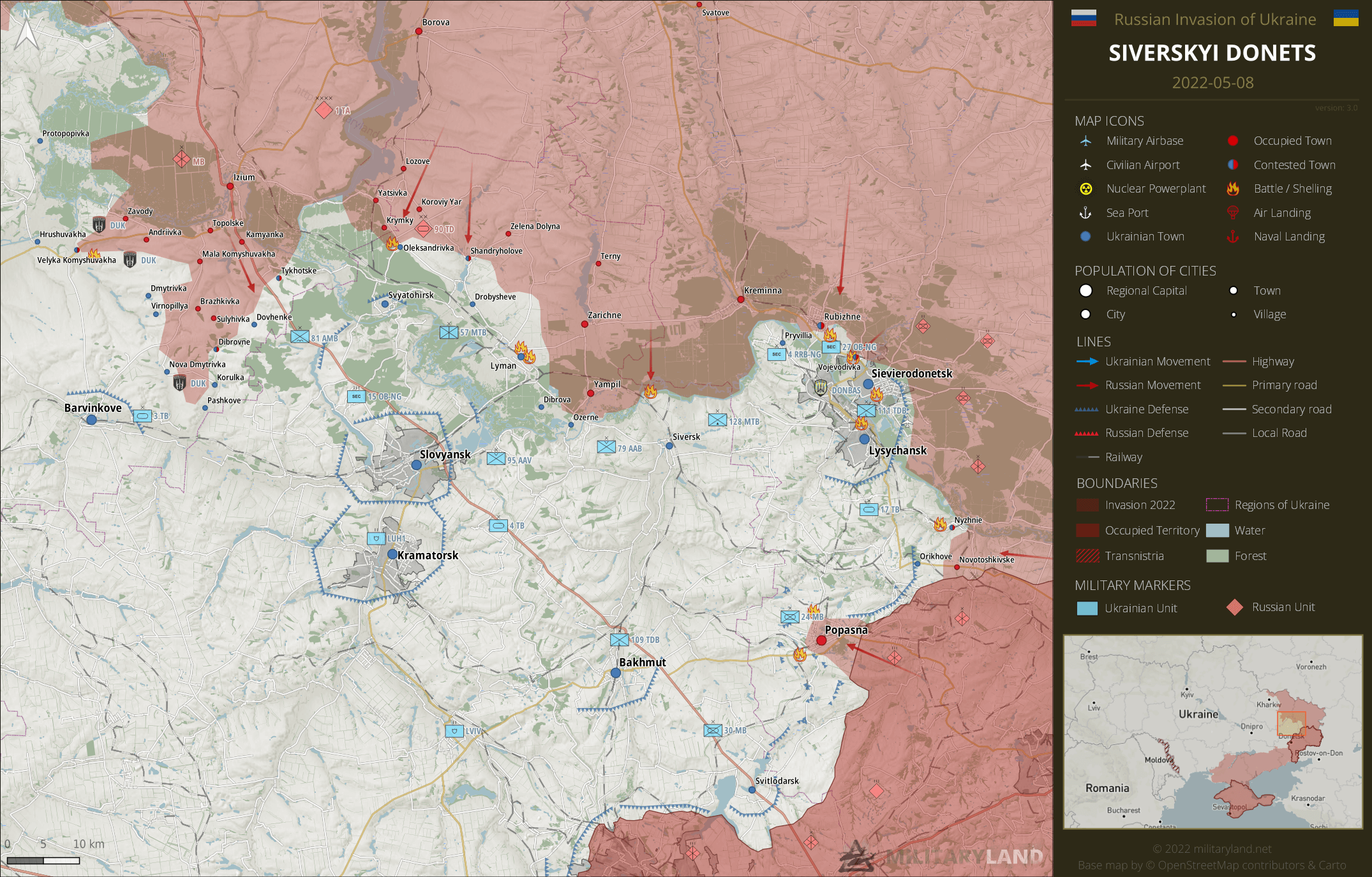 Russian troops have entered the northern outskirts of Shandryholove. The situation in the vicinity of Oleksandrivka remains complicated, the enemy has superiority on the ground and air. Russian forces attempted to lay a pontoon bridge across the  Siversky Donets river north of Siversk, but were ambushed by Ukrainian troops.

The head of Luhansk Oblast confirmed that Ukrainian forces have withdrawn from Popasna to more favorable and fortified positions nearby.

The enemy has also entered the eastern outskirts of Nyzhnie, based on the recently released footage. 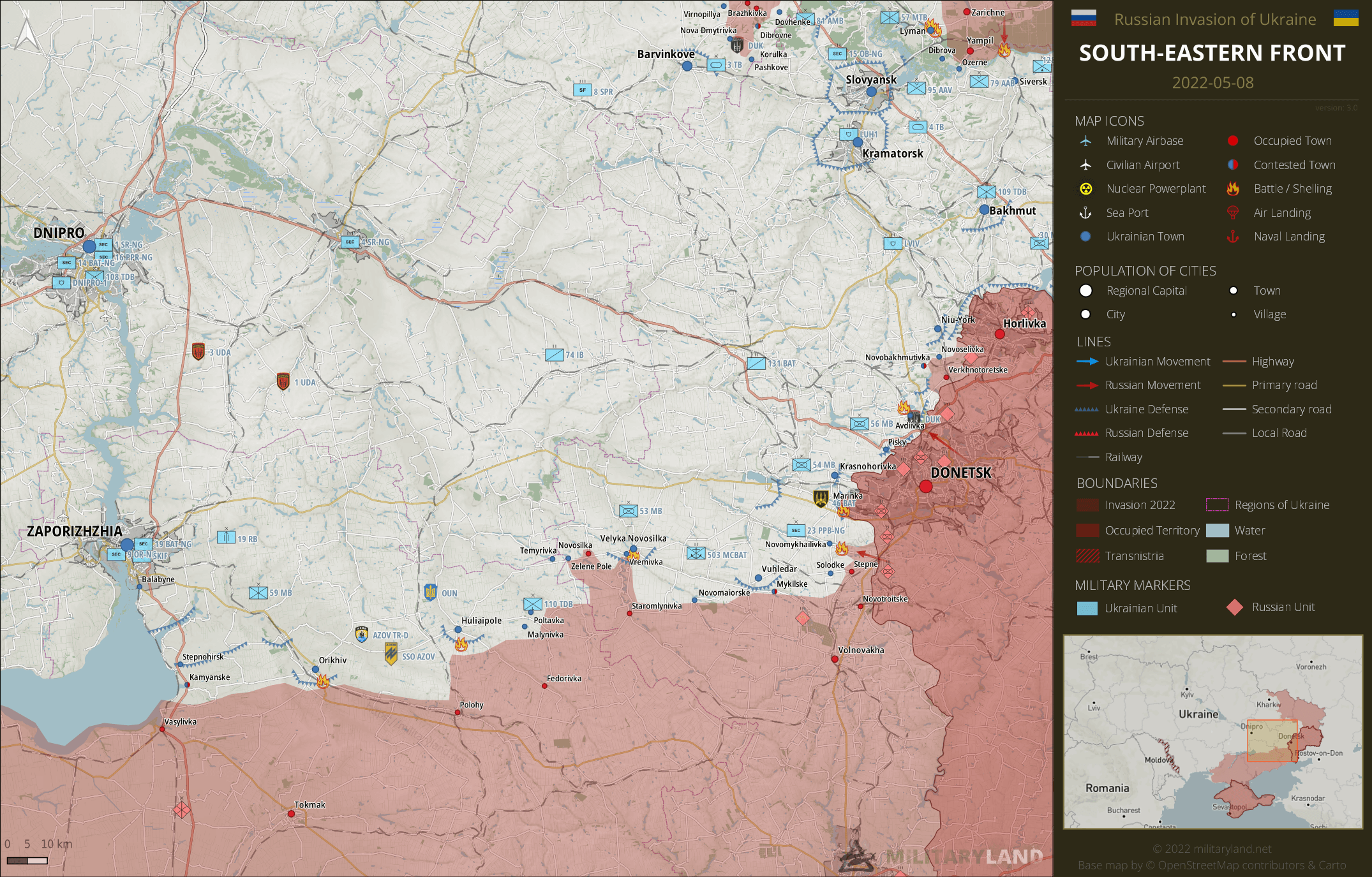 Russian troops attempted to break through Ukrainian lines in the area of Novomykhalivka and Novoselivka. Both attacks were repelled.

The head of Zaporizhzhia Oblast reported about ongoing Ukrainian offensive in the region. No additional details have been shared so far. 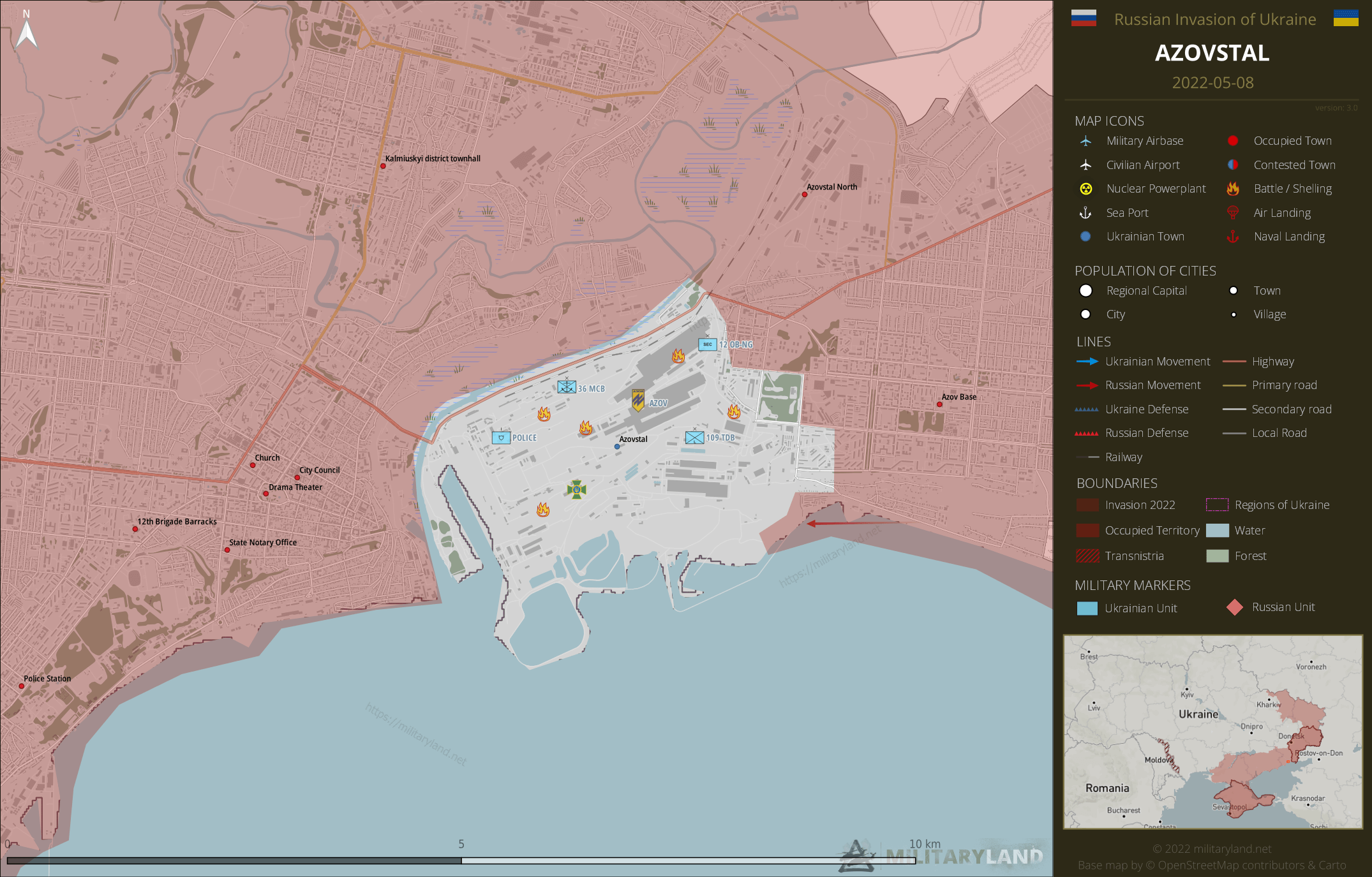 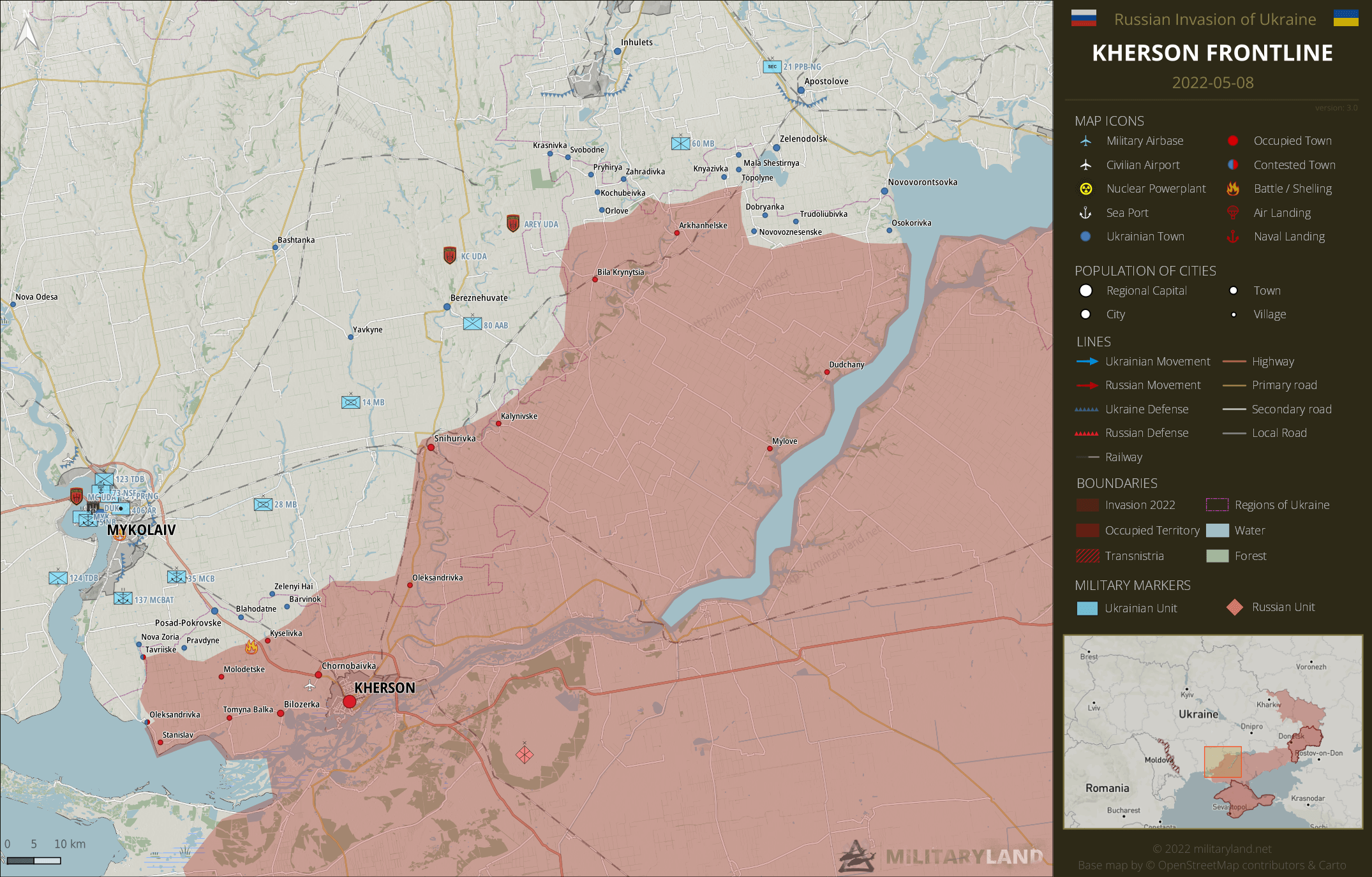 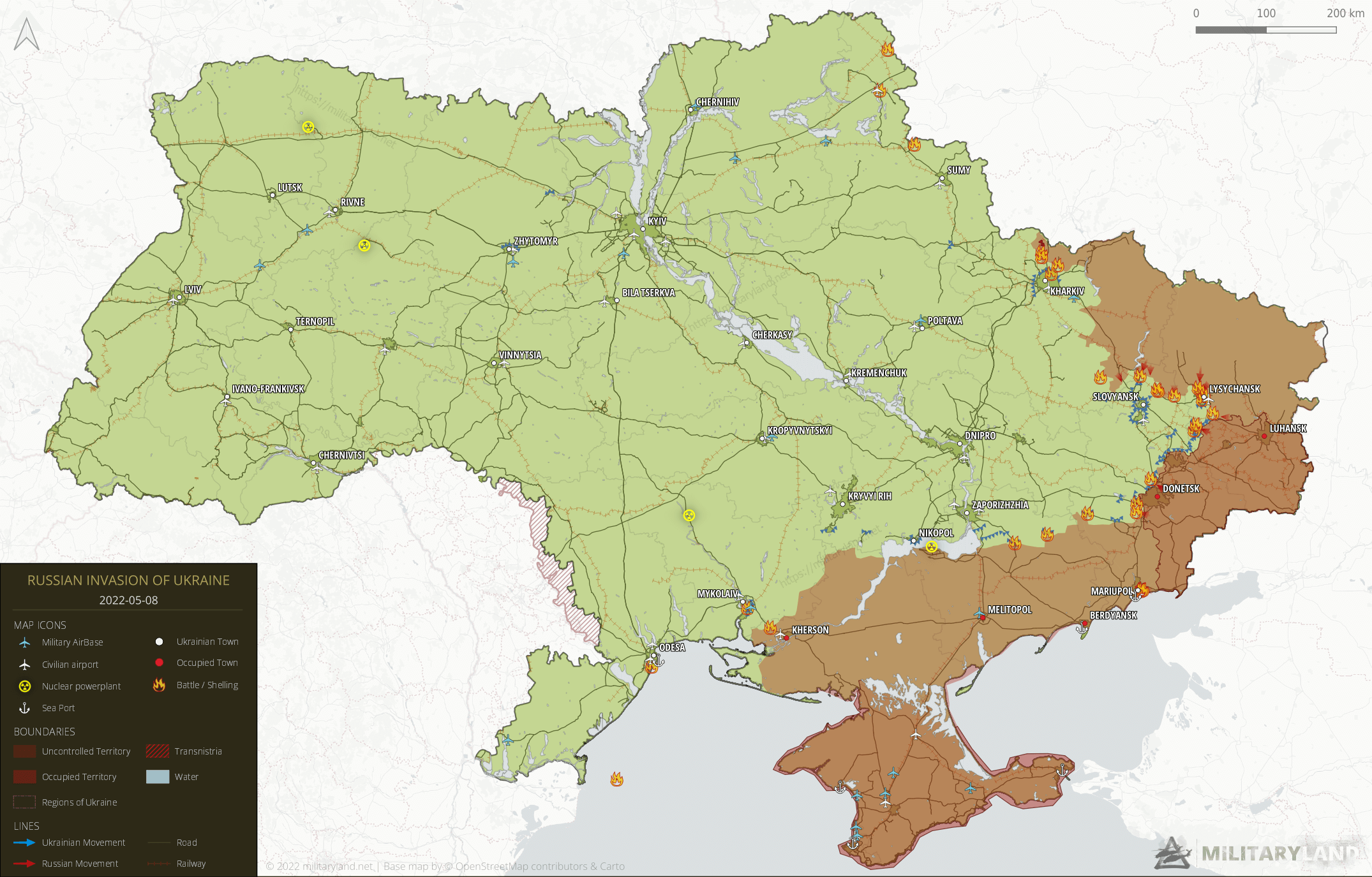 Today is may 9th, may the pits of Azov never fall to the horde on this day!

They got Popasna today, though.

I apologize for such a long post, but I want to explain in detail that the Wagner Group is not PMCs, but the Russian military. And I will describe it in detail. I have been interested in this topic for a long time, and have also taken a detailed interest (OSINT) in the topic of the events of February 7, 2018. Visitors to this great site (thank you for regular updates, Jerome) might be interested… Read more »

Thank you for your daily summary! There seems to be a pause on both sides of the offensive. It’s not clear whether the Russian forces will be able to widen the gap around Popasna and continue to push into Donbass, or whether the Ukrainian forces will be able to launch a new offensive near Kharkiv. But compared with the stalemate on the front lines, today’s parade at 10am Moscow time seems more important. Putin will… Read more »

Depending on how Putin portrays the war to the Russian people will decide how NATO entities react.

US is the decider on most international thing ,dealing with war,we have the money and the manpower, because other abdicate their responsibility,US killed 100 of Russian in Syria, Russian did nothing, but burn the body Google Wagner Group Syria US Massacre

First this was mercenaries, second there is much disinformation about this event. Google “The Truth About the Russian Deaths in Syria”.

Are you serious providing this suppossedly real version od events for German newspaper from 2018? Are you nuts believing Germans reports after so many proves they supported russians and Putin propaganda for so many years? The worst thing is they still do the same waiting for Ukraine to loose war and get back to business with russia as before. How can you expect that German press would at that time publish anything critical about russia… Read more »

These were acting with orders from Moscow,a dead Russian has no value to Putin, unless they bring you too power,by Putin bombing his own people Google This American Life Putin

U mean the Wagner mercenaries with the nice tattoos? The ones fighting in Donbas since 2014? The ones Putin denied connections?

As I thought, the speech was a dud. Nothing to see here, move on.

Russian building trenches in the vicinity of Kozacha Lopan….why not just go back 4km ,across the border