Ukrainian forces withdrew from the most of Popasna and lost a small settlement in the Siverskyi Donets area. Ukrainian troops continue to conduct successful offensive in Kharkiv Oblast and liberated another village.

Ukrainian intelligence reports that Russian forces are building trenches and fortification systems near the border with Ukraine in Kursk Oblast. 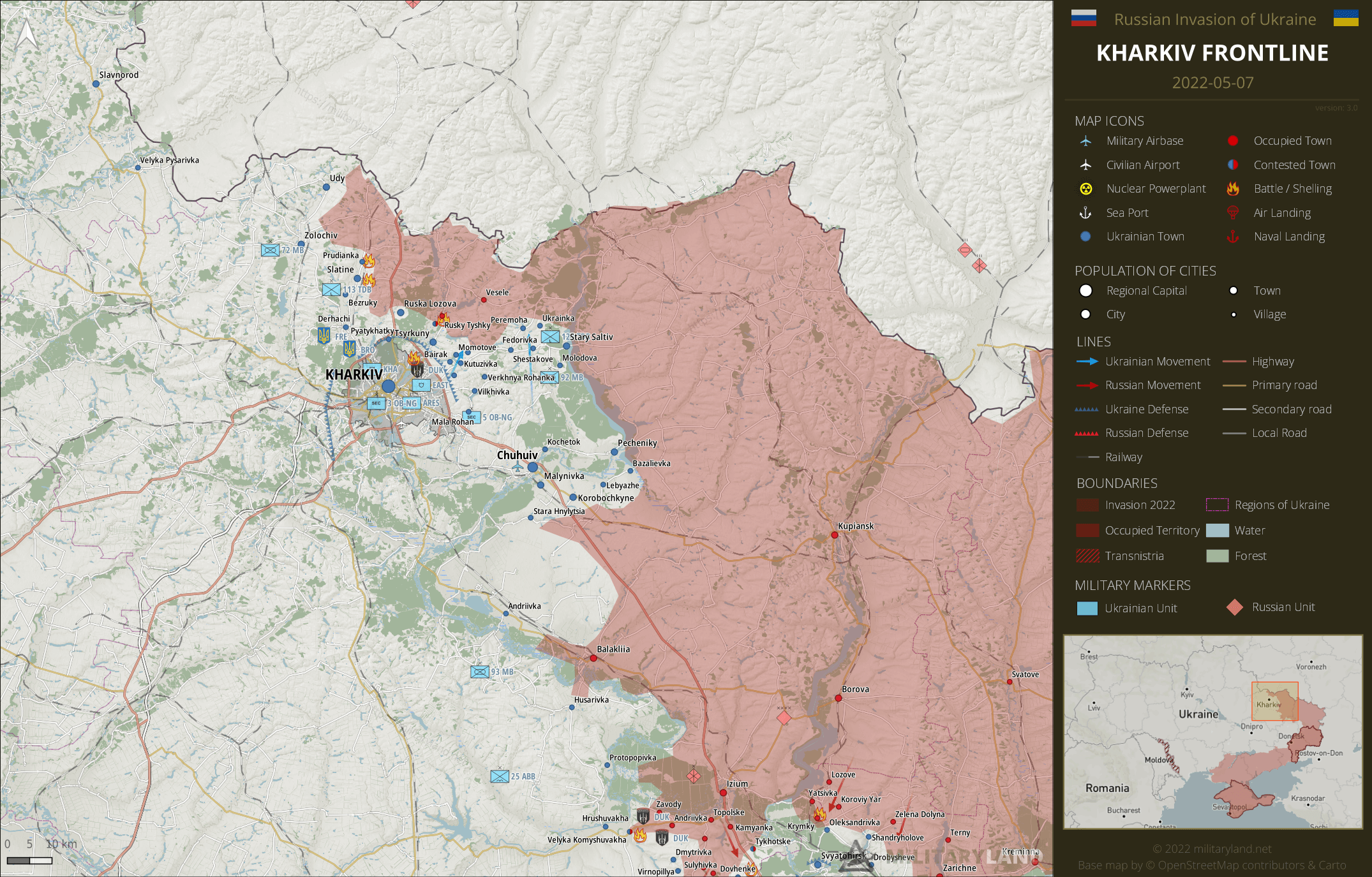 Ukrainian forces liberated the town of Tsyrkuny near Kharkiv. Russian army, in order to slow down advancing Ukrainian troops, blew up three bridges in the vicinity of Tsyrkuny and Rusky Tyshky. 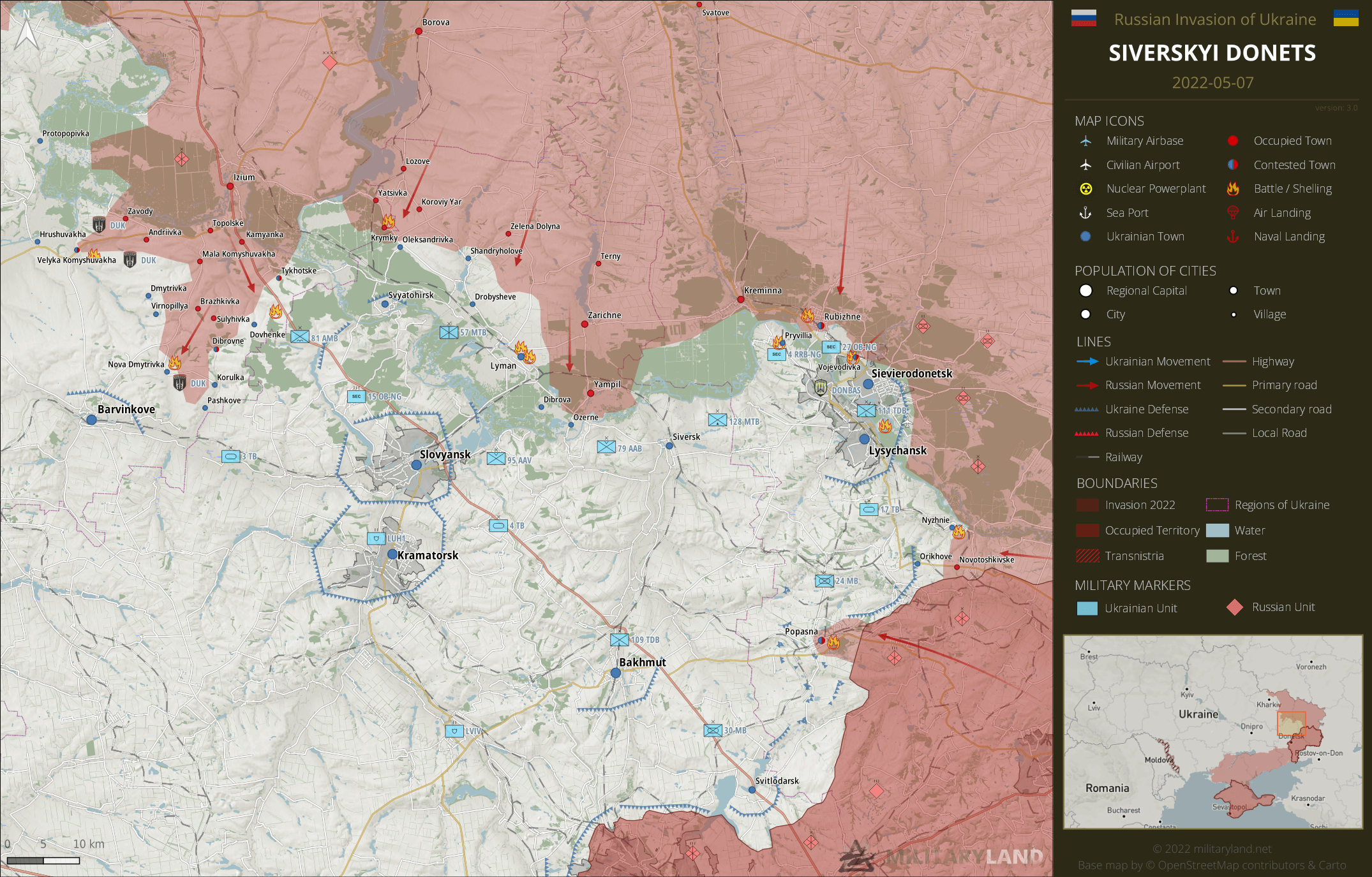 Russian troops attacked Ukrainian positions at Virnopillya, but the attack was repelled. The enemy has advanced towards Oleksandrivka, Nyzhnie and captured Krymsky.

Russian forces managed to seize most of Popasna and all published footage indicates that Ukrainian troops are no longer present in the city. The city lies in the rubble after two months of fighting and Russian indiscriminate shelling. Ukrainian forces most likely withdrew to nearby fortified positions. 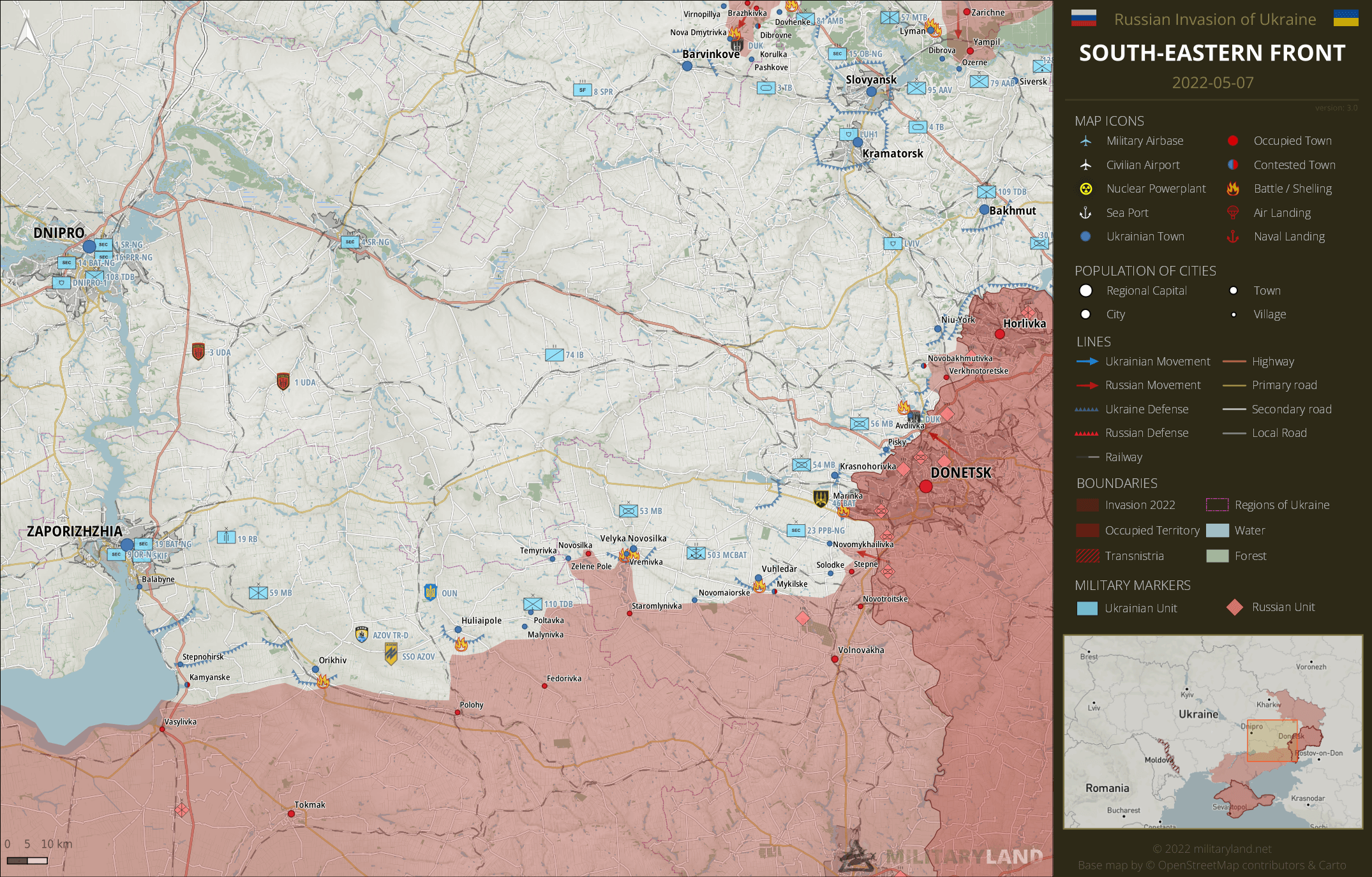 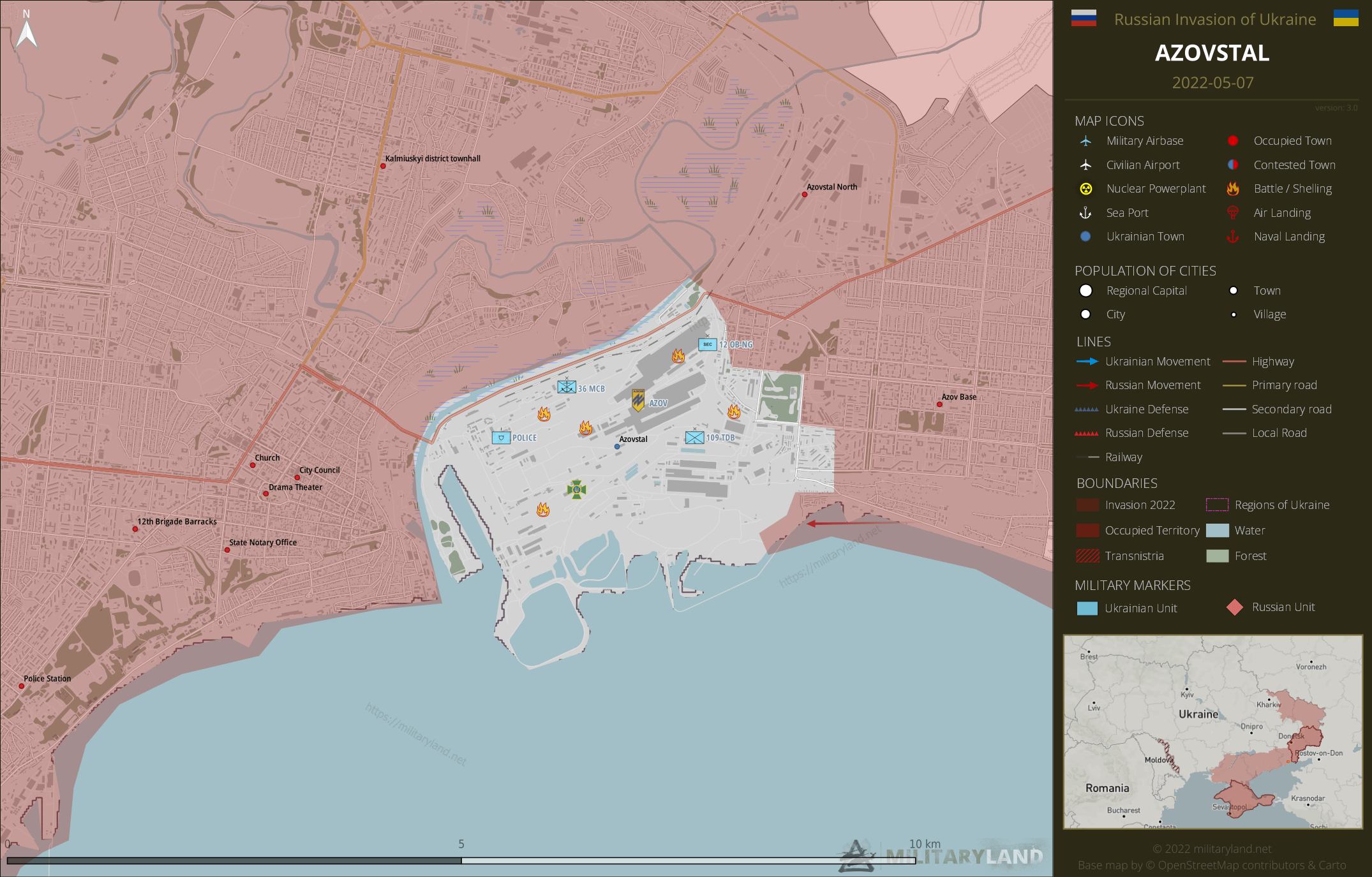 Russian troops used the civilian evacuation to its advantage and improved its positions around Azovstal. Furthermore, during today’s evacuation, three Ukrainian soldiers were killed and six more wounded.

According to Ukrainian deputy prime minister, all women, children and elderly people were evacuated from Azovstal today. 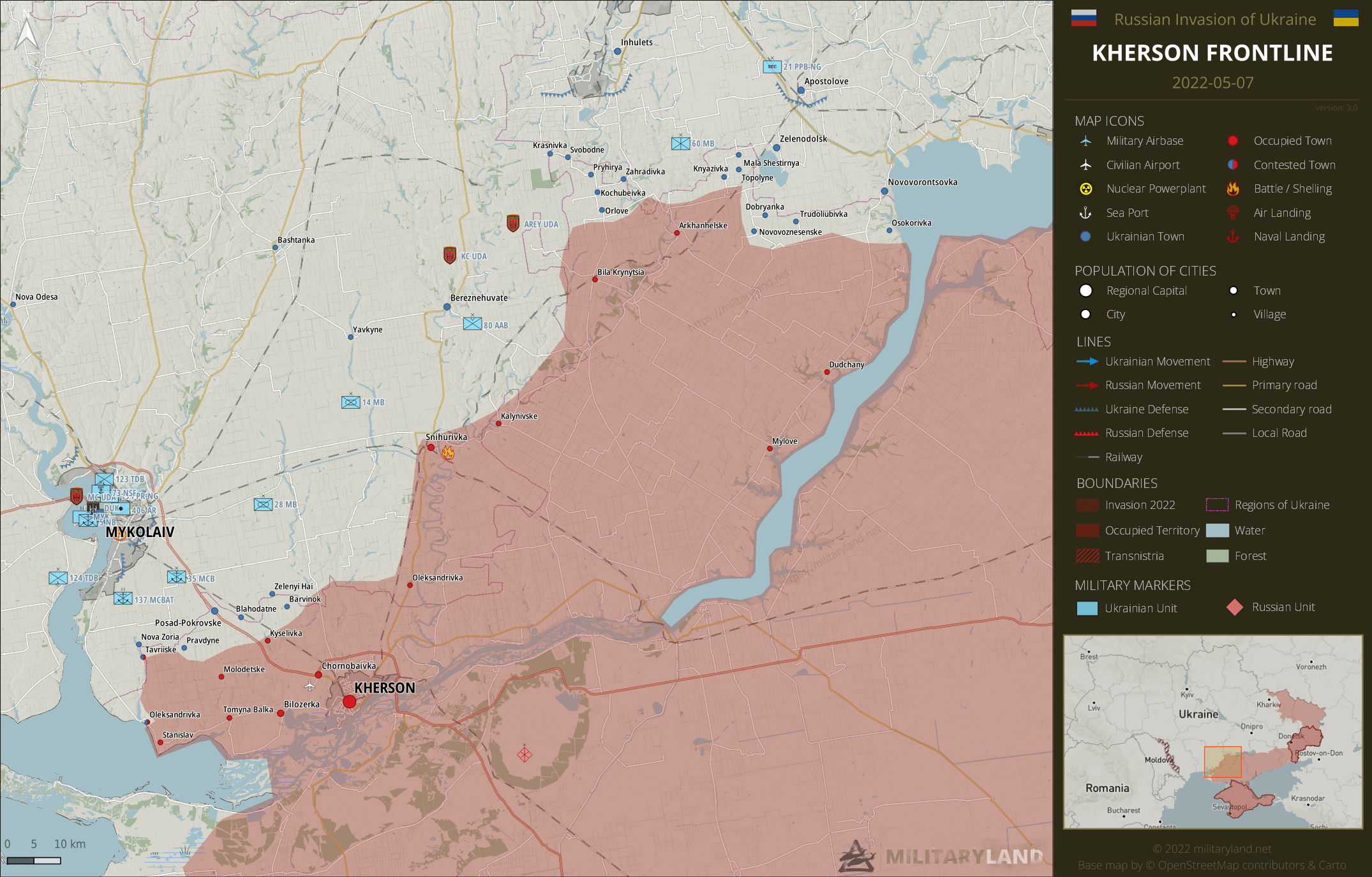 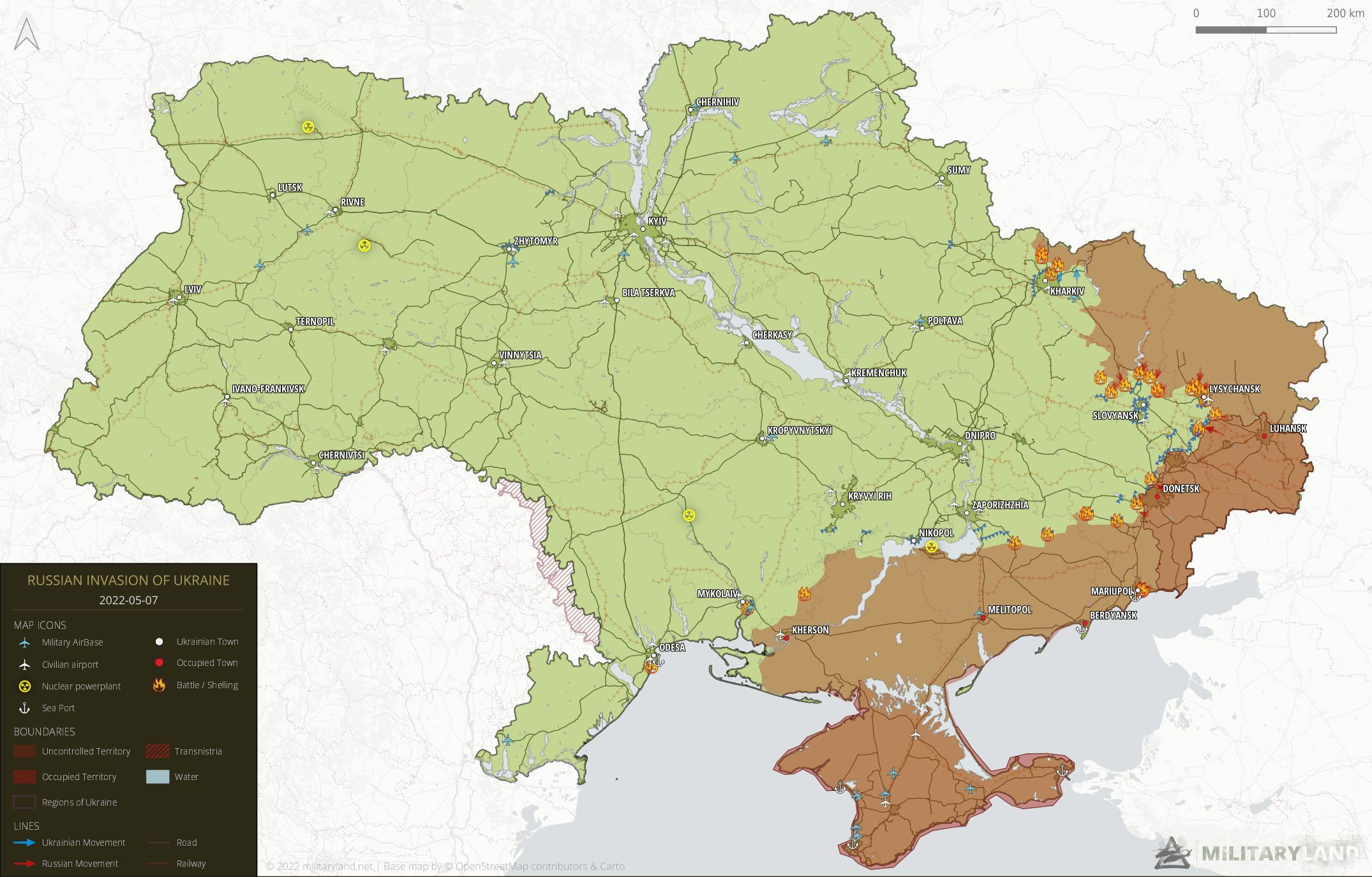 In any case, it is a cause for joy that all the civilians inside the Mariupol steel plant have been evacuated.
The Russians had been thinking of civilians as neo-Nazis’ hostages, which I don’t quite admit, but it did slow down the attack.

No one from civilians said that they were taken hostages, so that’s another “russian version” to blame “neo nazis”.

Please correct the occupation map.
Obviously, all villages of Kherson (and Mykolaiv) regions. located to the south of the Dnipro river are occupied,

I do not see any interest for UKR to try to retake Snake Island. Yes, they have to shell RU on it, destroy coming boats or RU helicopters, but, is they try to take the island, the result will be obvious. They will be shelled from far, every day, without any place to hide… Also, there is no runway on this island, so I dont think it could be an platform for TB2… maybe just… Read more »

sometimes denying an enemy to be present in an area is more important than being present in the area. I think that’s what the UA forces are doing. During wartime an island (e.g. Götland, Island,…) is always interesting to *control*, it is like a battleship or sometime an aircraft carrier that can’t be sunk. Obviously RU forces tried (hard) and failed to *control* Snake Island. There is a lot of discussion on internet about strategic… Read more »

It’s like shooting fish in a barrel. Empty it, and see if the Russians are stupid enough to come back, rinse and repeat. And print more “F off, russian battleship” t shirts while you’re at it.

For those who believe that mobilization in Russia is possible, I will publish this post. I say right away that it was not me who wrote this, but from the Ukrainian telegram channel. Translation may not be accurate 1) The Russian Federation deliberately dismantled the Soviet army architecture, built around a skeleton of officers in units awaiting mobilization to bring them into “wartime conditions.” Instead, they tried to build a “professional army” – that is,… Read more »

Interesting… so Ukraine and NATO could, in fact, push deeper into Russia and take some land, and Russia couldn’t do a damn thing about it save a first use of nuclear weapons?

here you have bomb run from two Ukrainian planes hitting Snake Island… they dont look to be shot down… video made by Bayraktar drone, so similarly, seems to be fine…

video of the strike on the landing craft

I can believe the drones being shot down, as they are all around there. The ship is a bit hard to believe as I thought russia already sank all of Ukraine’s navy.

It’s an odd thing to report in the midst of the big Russian offensive, aint it? Ukraine is cutting into the flank of the strongest axis of the Russian advance. The Russians have got, what, something like 22 BTG’s around Izium? Who is encircling who here?

This large Russian force is in or south of Izium, not east of Kharkiv, where there aren’t many Russian troops. It makes sense to blow up those bridges in order to make this flank easier to defend with minimal troops, so as to keep focusing on the south. But Ukrainian forces are a long way from cutting off these southbound troops.

I can verify that the troops near Kharkiv were, indeed pushed away and not retreated. They tried to retake Stary Saltiv soon after but failed:
“In the Slobozhansky direction, russian enemy tried to restore the lost positions near the city of Kharkiv, made an unsuccessful attempt to attack near the settlement of Stary Saltiv.”
https://www.mil.gov.ua/en/news/2022/05/05/the-operational-update-regarding-the-russian-invasion-on-18-00-on-may-5-2022/

past days, there is a lot of debates here about a possible mobili[Z]ation… according to this tweet (Video in the tweet): https://twitter.com/JuliaDavisNews/status/1523036461595242498 “Senior military expert on Russian state TV argued that mobilization wouldn’t accomplish a whole lot, since outdated weaponry can’t easily compete with NATO-supplied weapons and equipment in Ukraine’s hands and replenishing Russia’s military arsenal will be neither fast nor easy.” Like him, I think RU forces (within the current context in russia and… Read more »

Dude, mobilization would bring victory to Russia, that’s my opinion. It would not be fast (~3 months of preparations), but it would bring. That’s exactly what the Russians are missing … They are simply outnumbered in all directions. Ukrainians are mobilizing all the time, so for more than 2 months, and the Russians are bringing a very small number of new forces. Because they don’t have any more… I mean they have, but that’s actually,… Read more »

Every time we make a prediction like that, it’s Russia-centric. Did we ask Ukrainians though: after some extent of territorial losses and casualties, are you going to lay down weapons and surrender your freedom to orcs forever?

The “victory” comes after one side can’t fight any longer. I wouldn’t bet for that side to be Ukrainian.

At this point the harder you push the more devoted defenders will be. The more man you will bring the easier it will be for UA artillery to hit targets. Only way for Russia to advance forward is a slow methodical war, but then it would lead to massive internal problems. At this point the only choice Putin has is to announce victory and fall back to defensive positions and try to force peace talk… Read more »

You also need to remember that the economic sanctions won’t disappear even if Putin tries to claim some sort of victory. Those sanctions will gradually strangle the Russian economy, especially if the embargo on oil/gas is actually implemented.

Absolutely not true. Ukraine needs to keep the army around the whole border with Russia, Belarus and Moldova. Also theirs mobilized units are not in the fight yet. Right now Russia has more soldiers against Ukraine, but it will change in one month, when mobilized units comes to fight. And it is ridiculous to call it special operation when almost whole professional Russian army is involved plus Kadyrovs, Wagner group, Syrians.

if (Polohy == Pology && Zaporizhzhia == Zaporizhzhia) { Polohy in Zaporizhzhia Oblast is controlled by RU forces on the map. I saw this tweet today: “Today, after the #Ukrainian artillery strike on the Russian armor at the village of Pology in #Zaporizhzhya province, Russians left their positions. (Source: Gen. Staff of UAF). This settlement is the next achievement in the corridor for the theoretical liberation of #Mariupol.” source: https://twitter.com/MrKovalenko/status/1522975265252589568 the author is clearly pro… Read more »

I take it he says about SOME positions in the area of Polohy. It does not imply complete withdrowal from all around Polohy. There are MANY Ru forces and positions there.