Ukrainian Army reports another successful liberation of several villages in Kharkiv Oblast. Russian troops are slowly advancing in Luhansk Oblast, but we are talking about meters, maybe a dozen meters in some areas.

Two days remaining till the May 9 and the Victory Parade. It’s now clear Russian troops cannot achieve its goals and capture the whole Luhansk and Donetsk Oblast till the mentioned date. 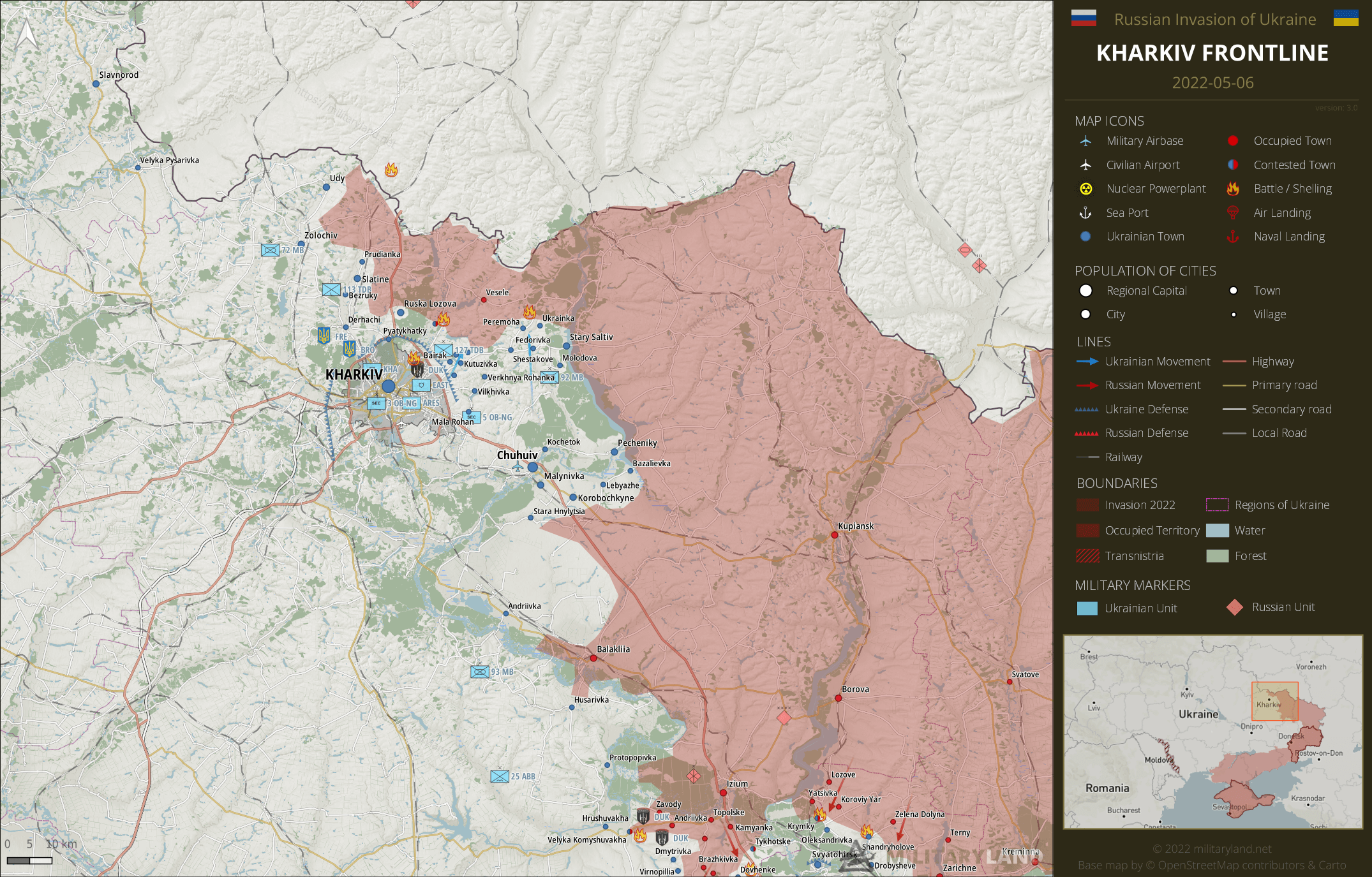 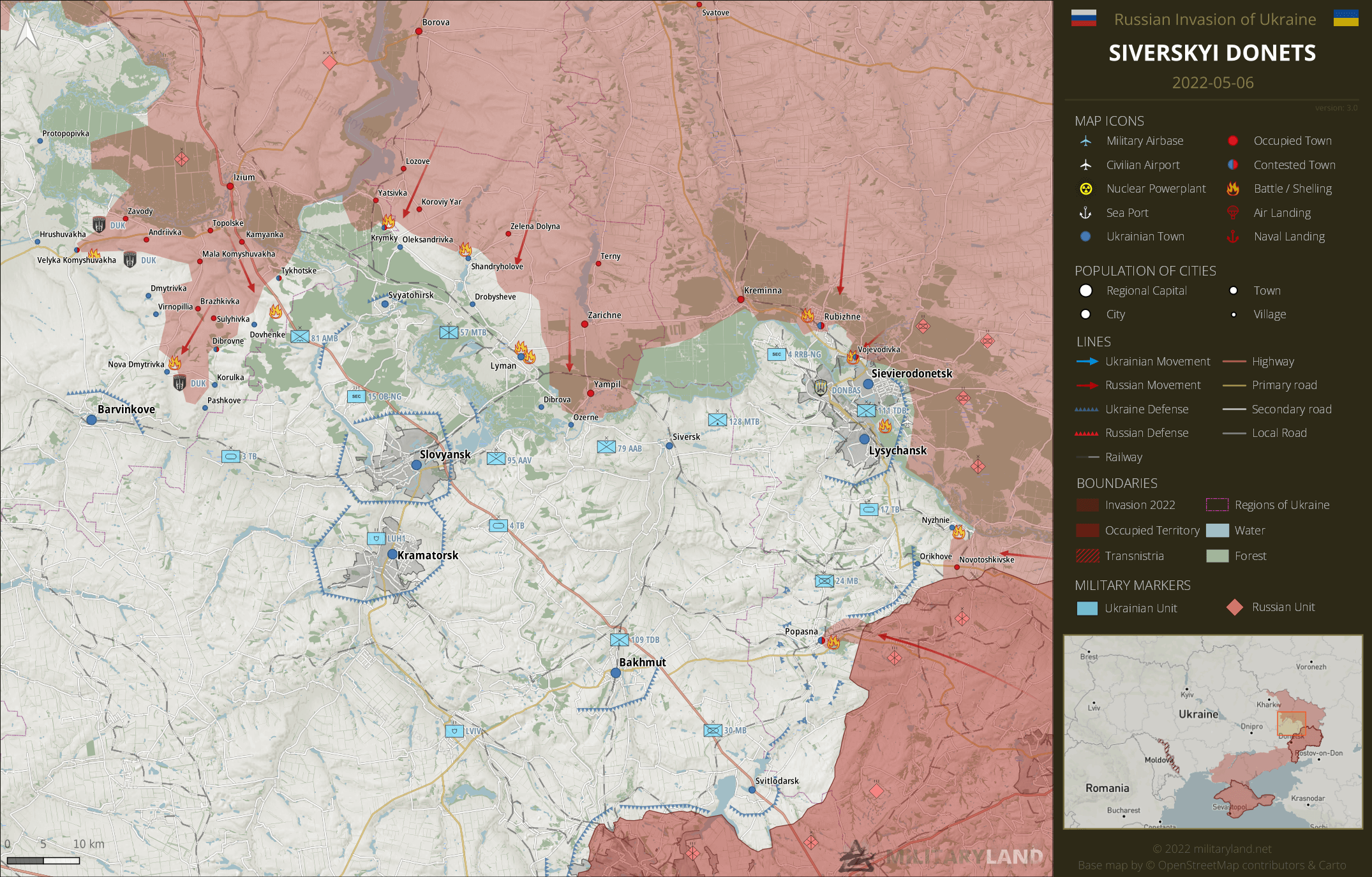 Russian troops attacked Ukrainian positions near Nova Dmytrivka, but had no success. The fighting continues in Rubizhne, Popasna and in the vicinity of Lyman. Heavy fighting was also reported from the area of Vojevodivka.

The enemy attacked Ukrainian positions at Shandryholove and Nyzhnie in the afternoon. Both attacks were repelled. 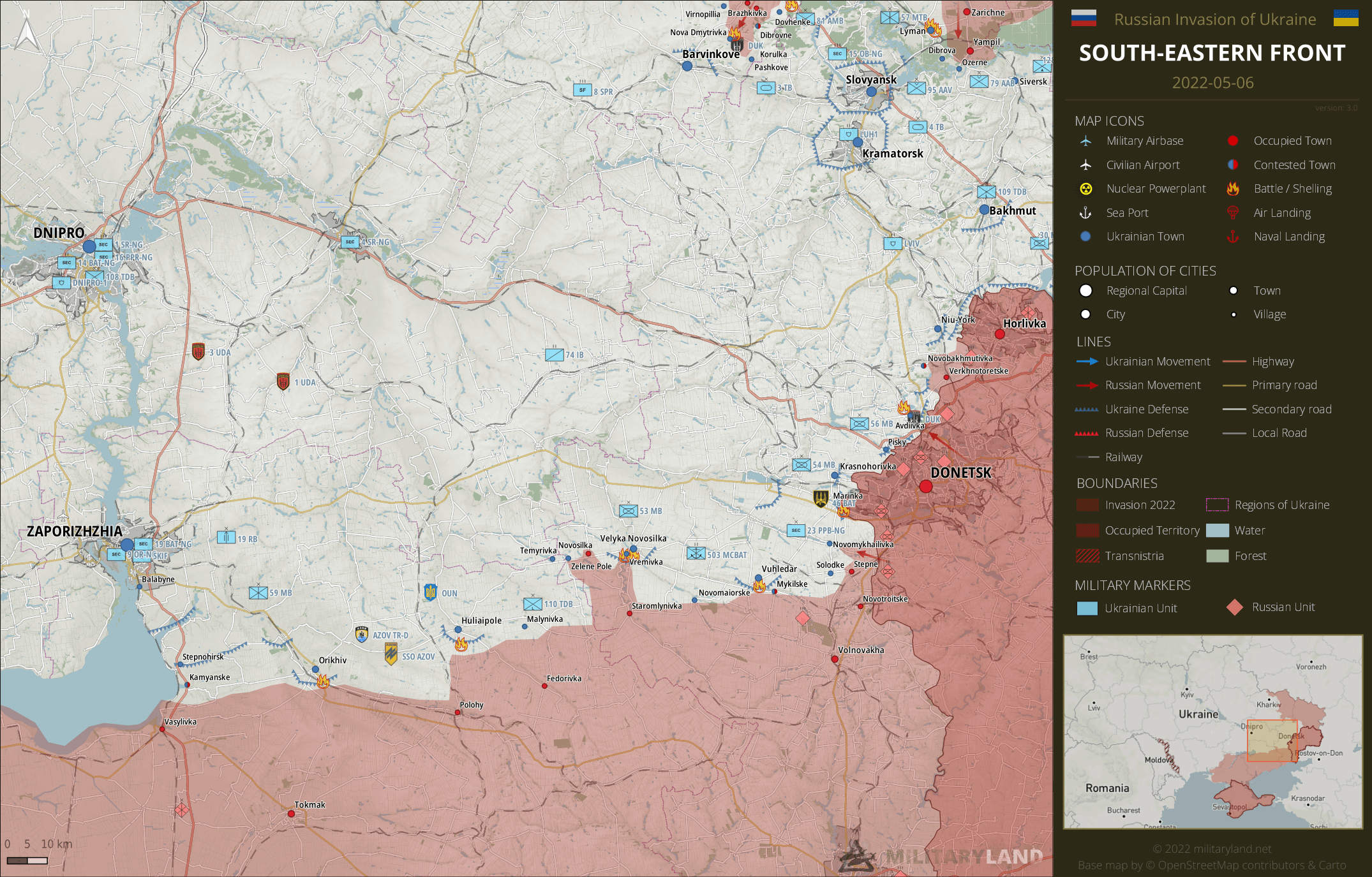 Russian forces assaulted Ukrainian positions in Avdiivka, but retreated to its original positions after a few hours long battle. 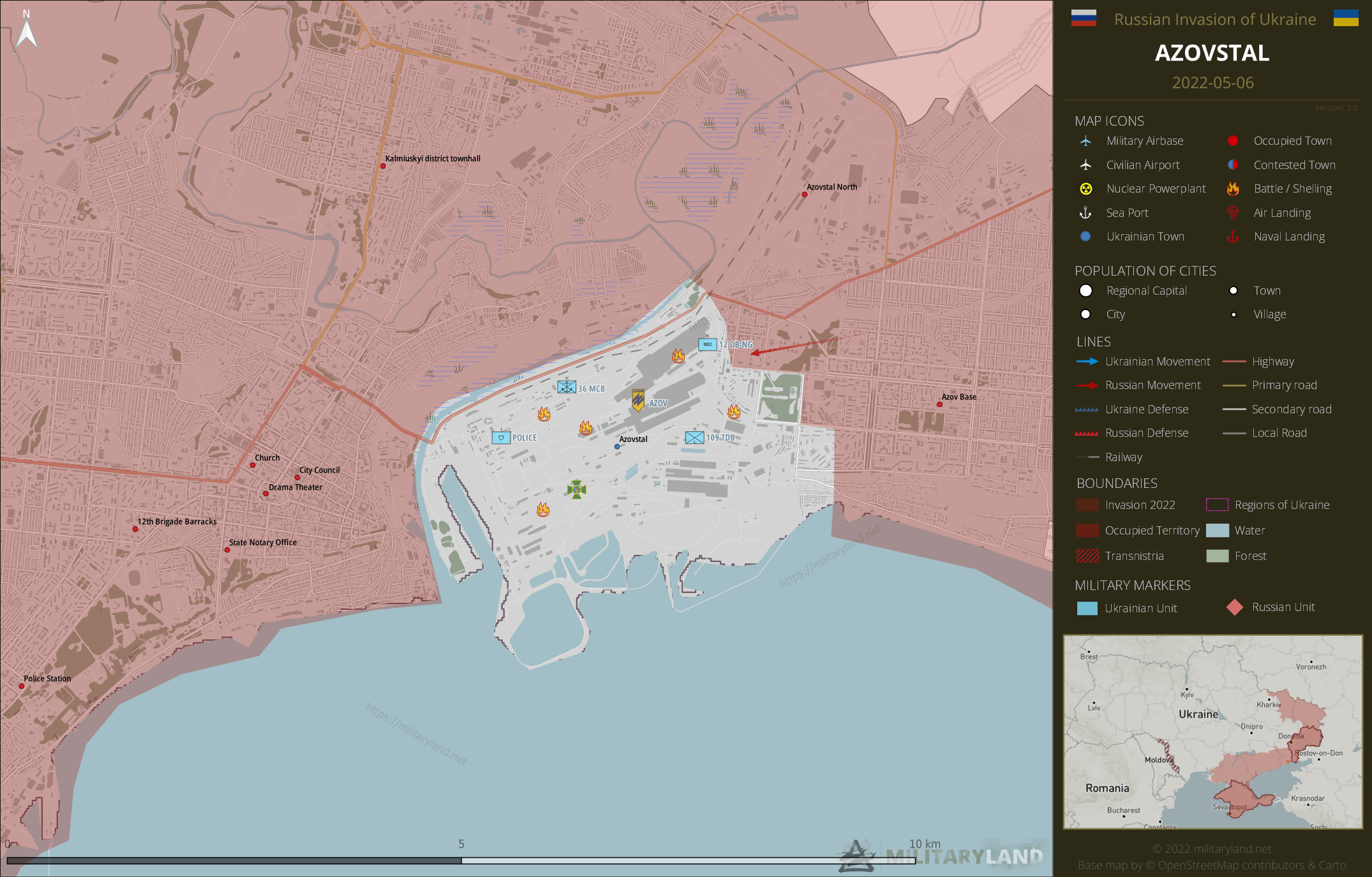 Another 50 civilians successfully exited the Azovstal plant today. According to Azov Regiment, Russian troops have broken the ceasefire agreement and targeted an evacuation truck. One Ukrainian soldier was killed and six more wounded as the result. 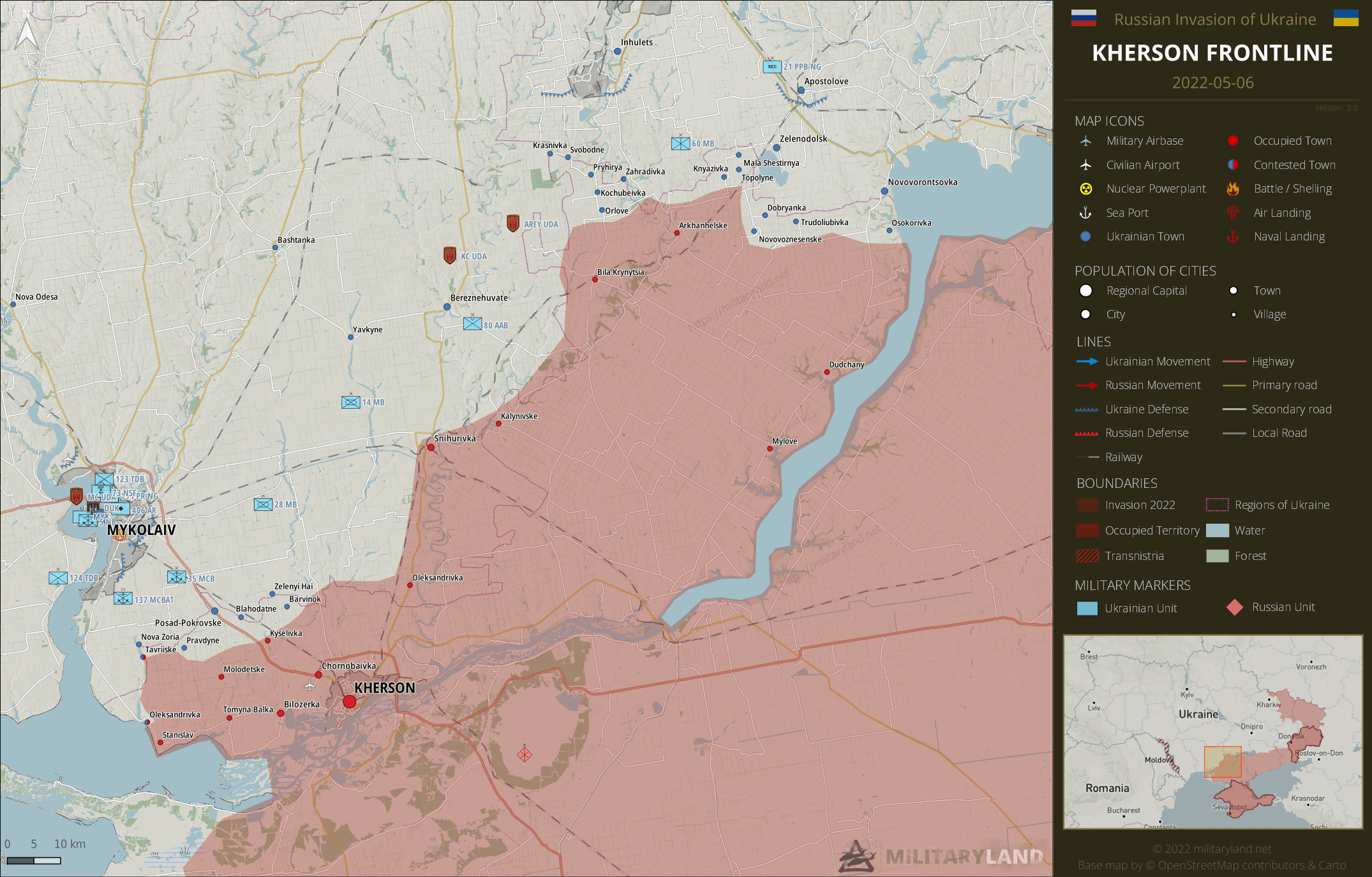 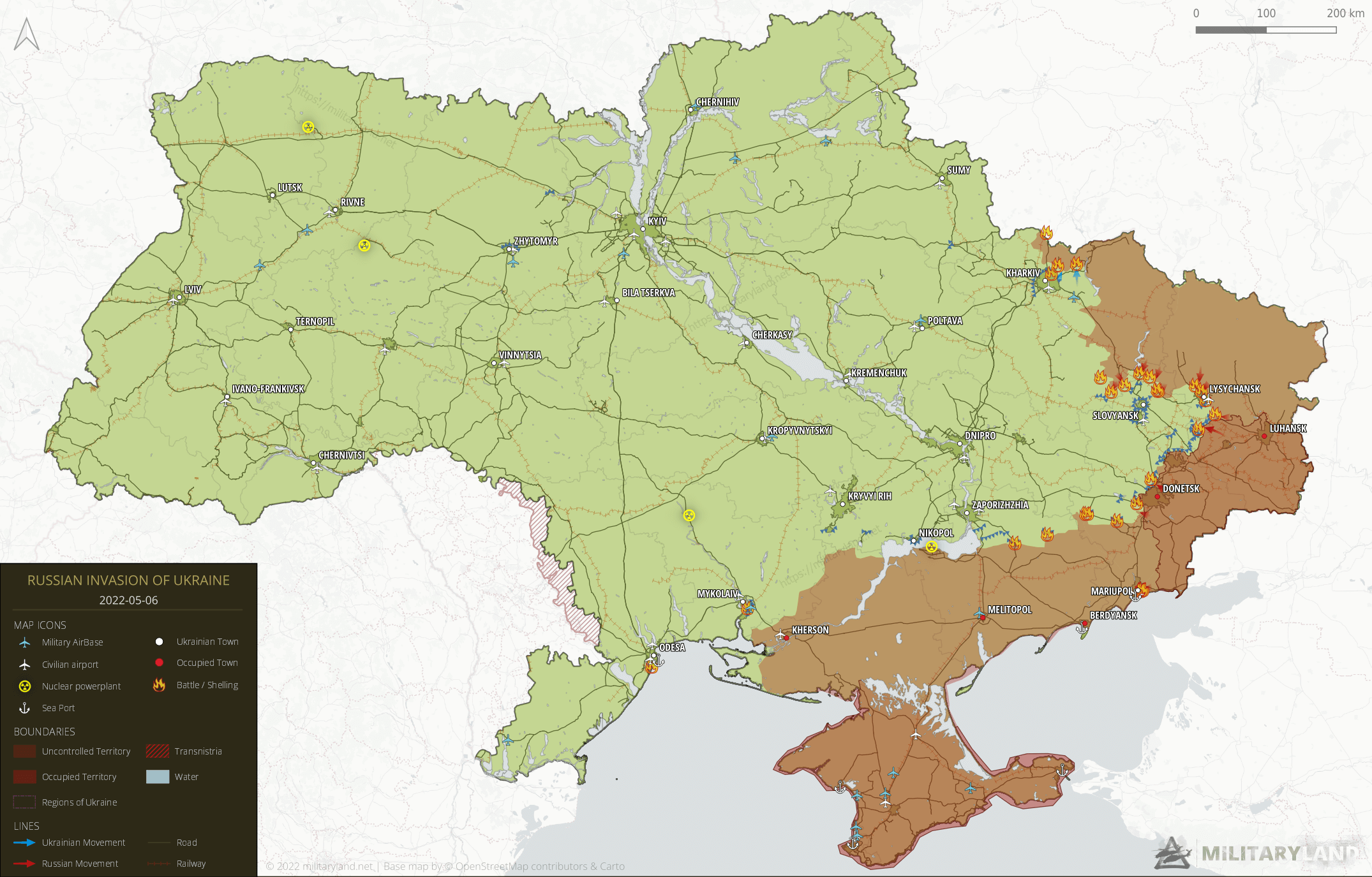 Thanks for Maps – but again maps out of sync with magnifying glass – big discrepancy.

If the Ukrainians are beginning to collapse the Izium axis already then it’s hard to believe that Russia even has time to mobilize for war. Ukraine has been mobilizing for a couple of months now and they’re being armed with a flow of superior Western weapons and backed by Western economies. Biden is signing Lend Lease on Monday and then he’s going to ask Congress for another $33 billion for Ukraine. He’s setting up a… Read more »

They can’t go forward without a massive artillery advantage. I would generalize that this has been the case for everyone – assuming classical land battle – since about 16th century including the Northern War, Napoleon, WW2 and everything in between. AFU 93rd brigade “For every 300 shells they fire, we fire three.” https://www.digitaljournal.com/world/ukraine-seeks-to-stall-relentless-russian-onslaught-in-donbas/article Summary – artillery advantage is good if you have it. And throwing missiles around makes perfect sense. Because in order to fight… Read more »

Putin idea was that Ukraine was ready to fall, and will welcome Russian troops, that why they initialy try to make small shelling on infra, … to be able to use them later for their own…. But now they understand the error, and they shell them directly. Anyway Ukr are able to fix that very quickly. Bridges have already been restored very fast (in a few days), and taking into account basic dollar cost, I… Read more »

Of course, everything is constantly being repaired. Many continental powers even had – and some still have – dedicated railway troops, essentially military engineers whose task is to make sure that the railroads work no matter what. And this is not about the cost of missile vs the cost of repairs. It’s about creating a disadvantage for the enemy at some time and place. In chess sometimes you can trade queen for a cheaper piece… Read more »

Then again this isnt chess. Its war. Russia is losing. Interesting to see how they make their victory day 9.5 😀

i guess taking out key rail lines, or fuel supplies and etc doesn’t figure into some folks equations here.. interesting…

Thank you for your daily summary! The Russian army fell back near Kharkov, in large part because of the shortage of men. There may be a variety of reasons why Putin has not yet announced a mobilization. While Russia has a large Arsenal, the number of well-maintained weapons may not be very large. The mobilization of citizens could cause discontent and affect the approval rating. If the massive mobilization fails to win the war, it… Read more »

I always thought it was the October revolution( (that took place in November (different calendar))
Unless you are referring to the Yeltsin revolution (1991/92). The time he stood on the tank, during the protest. Don’t know that month or date.

There was February Revolution of 1917 in the Russian Empire when the monarchy fell and Provisional [republican] Goverment was established. October revolution came later the same year, overthrowing the Provisional Government and bringing left-wing Bolshevicks and their allies among SRs to power. All three “revolutions” (third one being the one of 1905-1907 – although was not much of a revolution) is considered to be direct consequences of Empire military defeats – first in Russo-Japanese war,… Read more »

Nope, this one https://en.wikipedia.org/wiki/February_Revolution … the revolution which torn down the czar regime. And yes, it was mostly ignited by visibly obvious incompetence of the Russian army and unbelievable suffering of the Russian people.

In Russia in 1917, the February Revolution was followed by the October Revolution .

Even if the Russian’s call it a day on the 9th it will take years for Ukraine to be back to its former self if it can recover at all i do hope so.

“Russian troops are slowly advancing […] about meters, maybe a dozen meters in some areas. Two days remaining till the May 9 and the Victory Parade. It’s now clear Russian troops cannot achieve its goals […]” meanwhile on twitter Rob Lee: “The RSOTM Telegram channel run by Wagner private military contractors currently in Ukraine said that either “there will be a mobilization or we will lose the war.” They think they need 600-800k people to… Read more »

Yes, I would agree with that assesment. The amount of 200k was way too small to begin with. For a “special operation” sufficient, yes, but not enough for invasion of this size. Russia just doesn’t have the army to take a country the size of Ukraine.

Russia’s intention is to take over the breakaway regions. after that it would be to maintain the fronts and hold Ukraine’s arm in a war of attrition

This isn’t 2014. To Russians holding the front across hundreds of miles of territorial gains, counting on internationally negotiated cease fire to give them time to bolster their positions and keep Ukraine exhausted… good luck. No, it won’t be like last time. Russian presence in new territories will continue being existential threat to Ukraine. That presence will be tested with precision artillery, drones and whatever modern nightmare the West finds effective to supply to Ukrainians.

at start Russia army was enough to take donbass and south of ukraine. Without the stupid idea of Putin to take the whole country in a blitz, Russia would have been able to progress quietly in the south/East, without trigerring all the West sanctions and support to Ukraine, staying under EU/US sanctions levels. But Putin probably has not enough time to wait for such safe solution for Russia (Ill?) Putin attack by north to Kiev… Read more »

> Probably yes in Donbass/louk/mariopol But even that Donbass is not completely safe. The distances are crazily small. Currently the UA army is some twenty kilometers from the railway Velikiy Burluk – Kupiansk, which I would expect is the main transportation artery for the Russian army attacking Slaviansk and its vicinity. That’s really not that far. One serious mistake of Russians, one serious success of UA counter-offensive and the army in the north of Donbass/Luhansk… Read more »

It’s probably to stop them in Izuym considering how much gamage they have done to Russians there… day after day they say the biggest number of casualties came from Izuym, Donbass, etc. They clearly want to fight them there. Another curiosity is the alleged threat of blowing up the Crimean bridge on the evening of May 9:
https://ukrainetoday.org/2022/05/04/the-crimean-bridge-will-fall-a-site-with-a-countdown-appeared-something-will-happen-on-may-9/
https://www.forbes.com/sites/davidhambling/2022/05/06/ukraine-threatens-russias-vital-bridge-to-crimea/
That could be laying the groundwork for Kherson / Crimea takeover by weakening supply routes there.

Keep watching, you may learn something.