Ukrainian forces continue to conduct successful operation in the vicinity of Kharkiv and also announced the start of counter-offensive near Izium. The success in the north is however very likely at the cost of Mariupol.

Russia tries to create panic among the Ukrainian civilian population and to disrupt the supply lines in the rear, but has minimum success on the battlefield.

This summary includes events of Day 70 and 71. Thank you all for your great support. I really appreciate it. 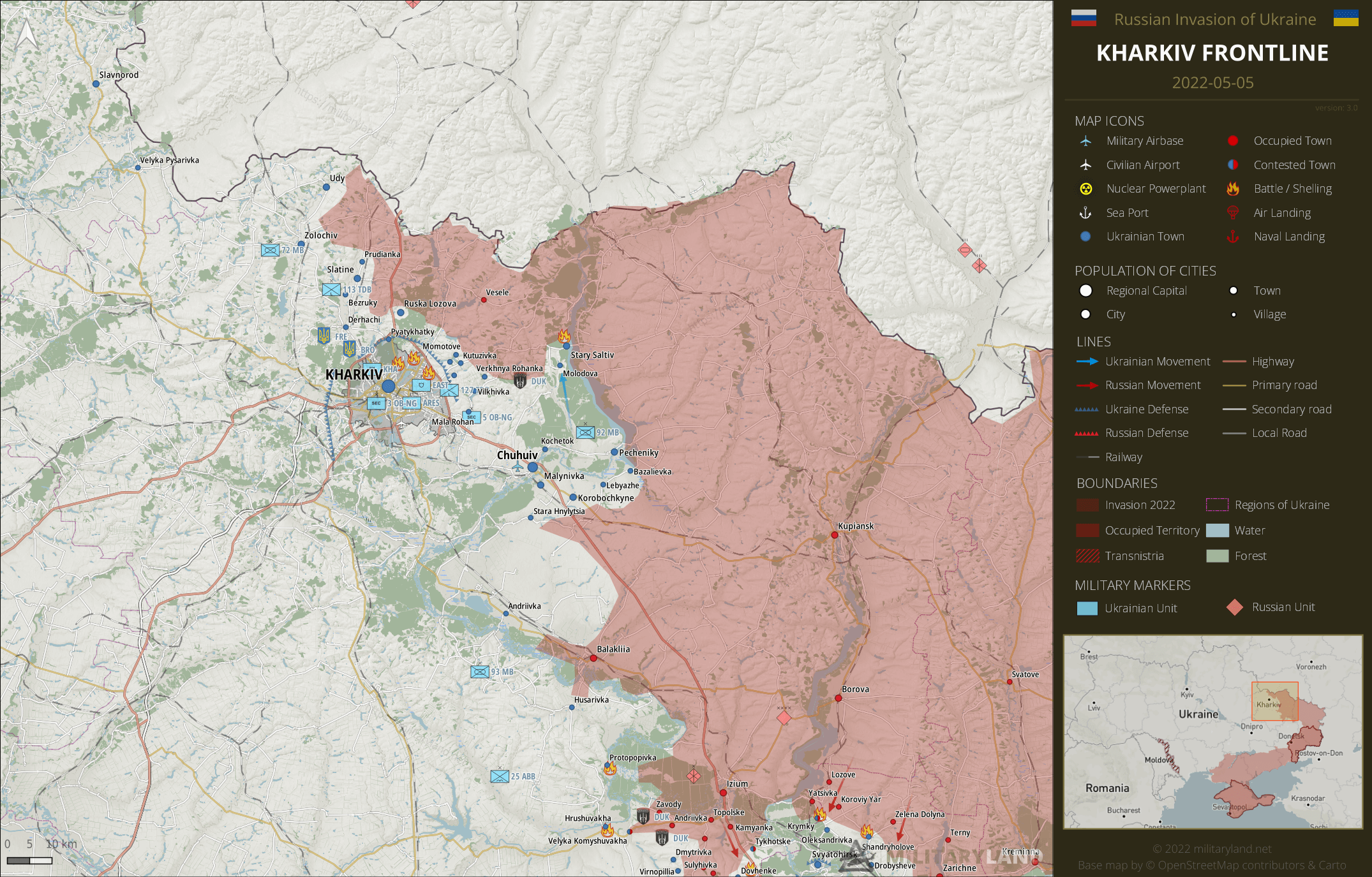 Ukrainian forces have advanced north of Molodova and liberated Stary Saltiv. The subsequent Russian counter-attack in the afternoon was successfully repelled. 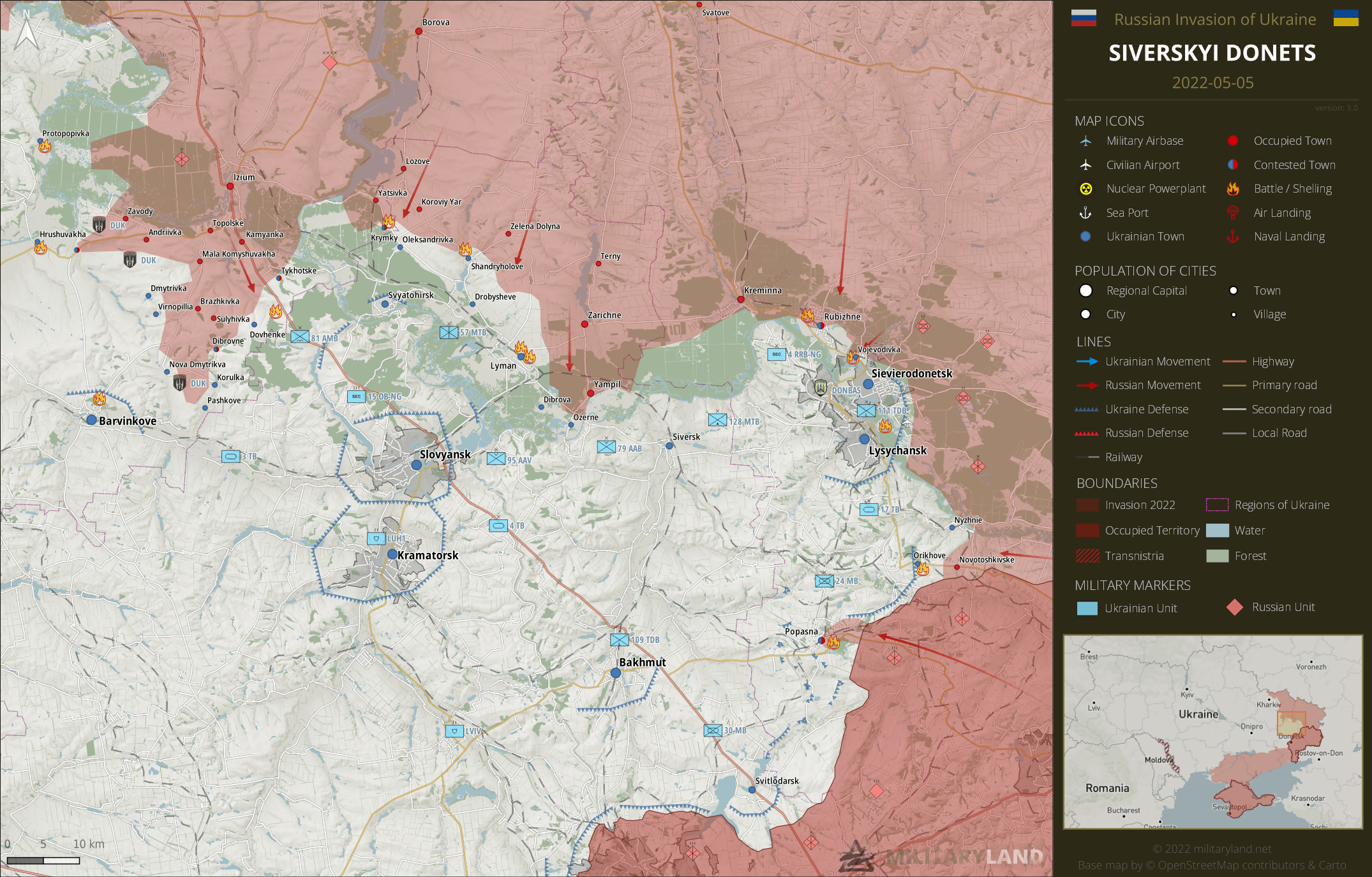 Russian troops attempted to push in the area of Dovhenke and the highway Izium – Slovyansk, but the advance was denied by the defenders. Situation remain tense in the vicinity of Krymky and Oleksandrivka. Russian forces tried to open a new breakthrough at Shandryholove, but the attempt wasn’t successful.

The enemy attempted to cut off Ukrainian defenders in Rubizhne and stormed the village of Vojevodivka. The assaulted was repelled. The fighting continues in Rubizhne, Popasna and in the vicinity of Lyman. Russian troops reached the outskirts of Sievierodonetsk from the north.

Russian attack towards Orikhove was repulsed. 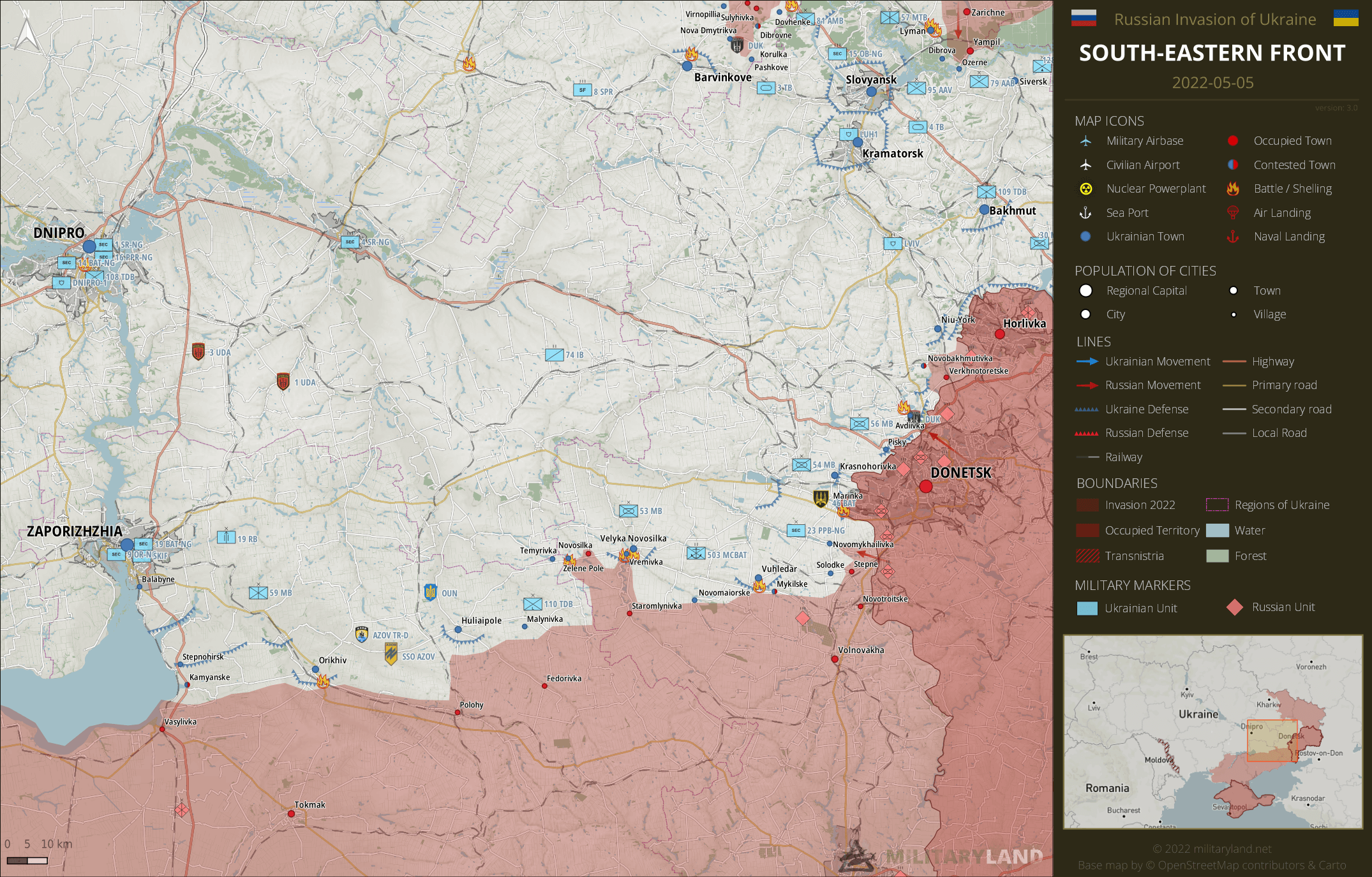 There was no change on the ground in Donetsk Oblast. Ukrainian defenders repelled all attacks. 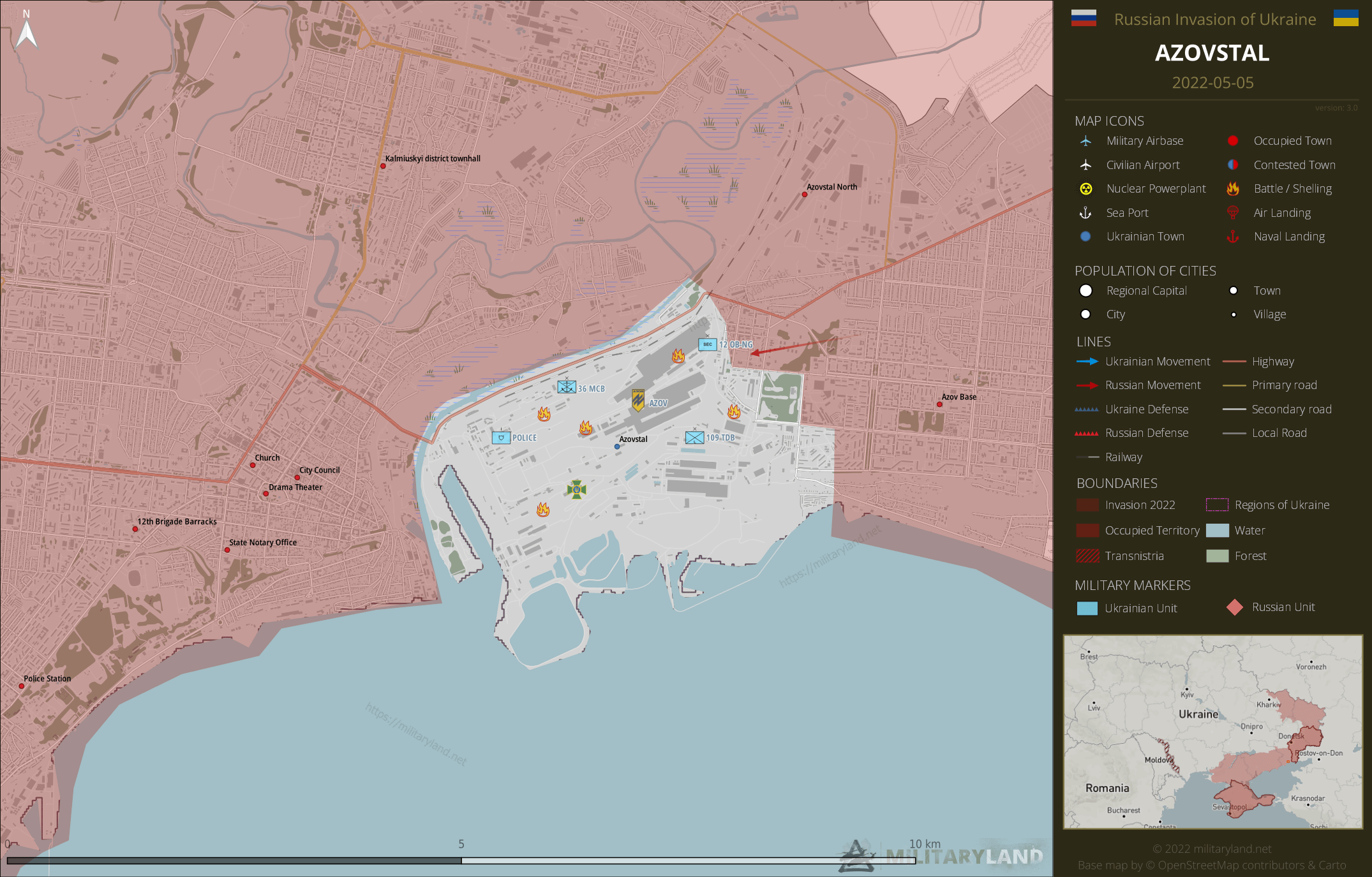 Russian troops have been storming and shelling the Azovstal plant basically nonstop for the past three days. The enemy has reportedly broken into the plant, but all key structures and the underground bunkers are in Ukrainian hands. 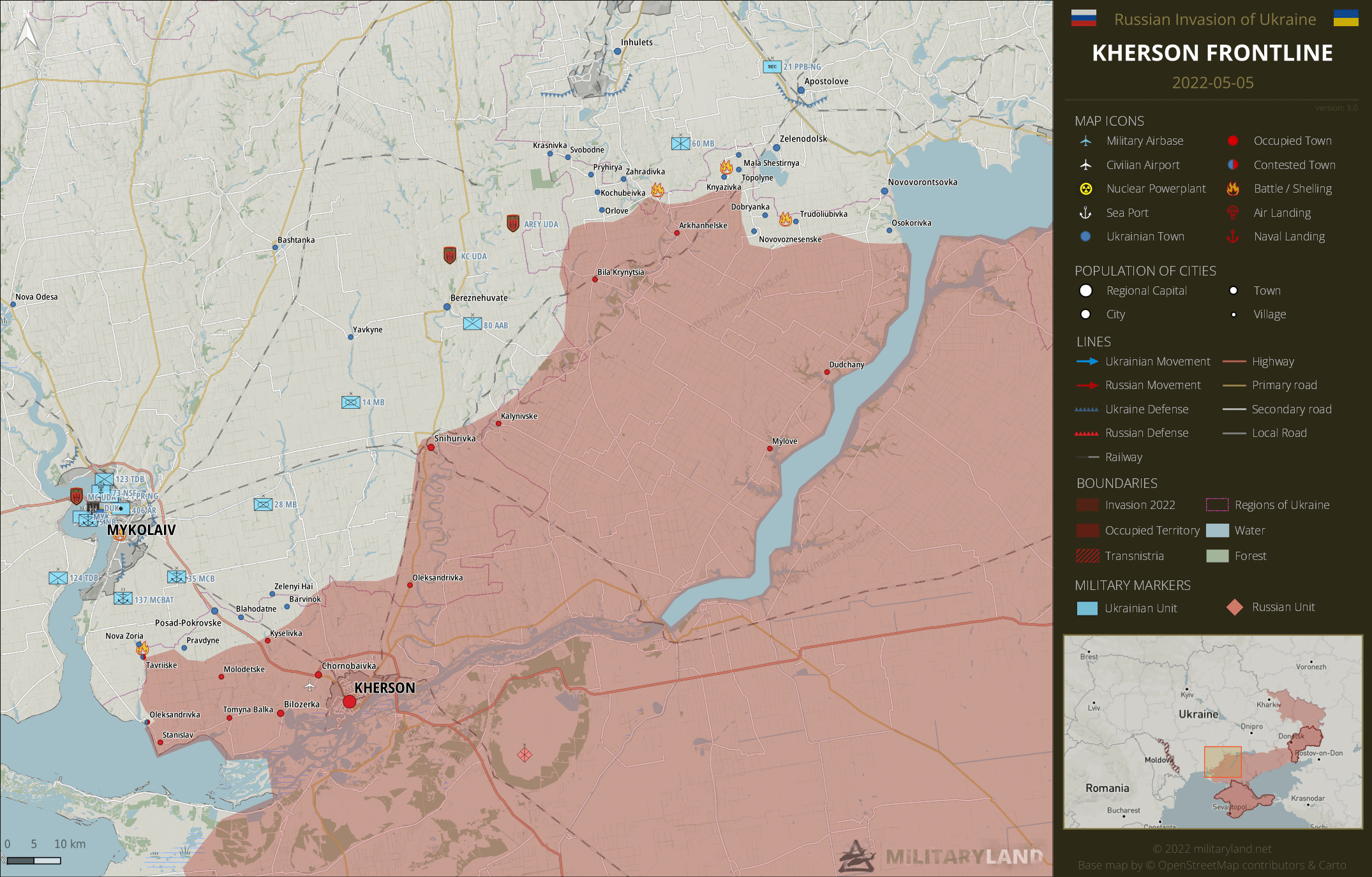 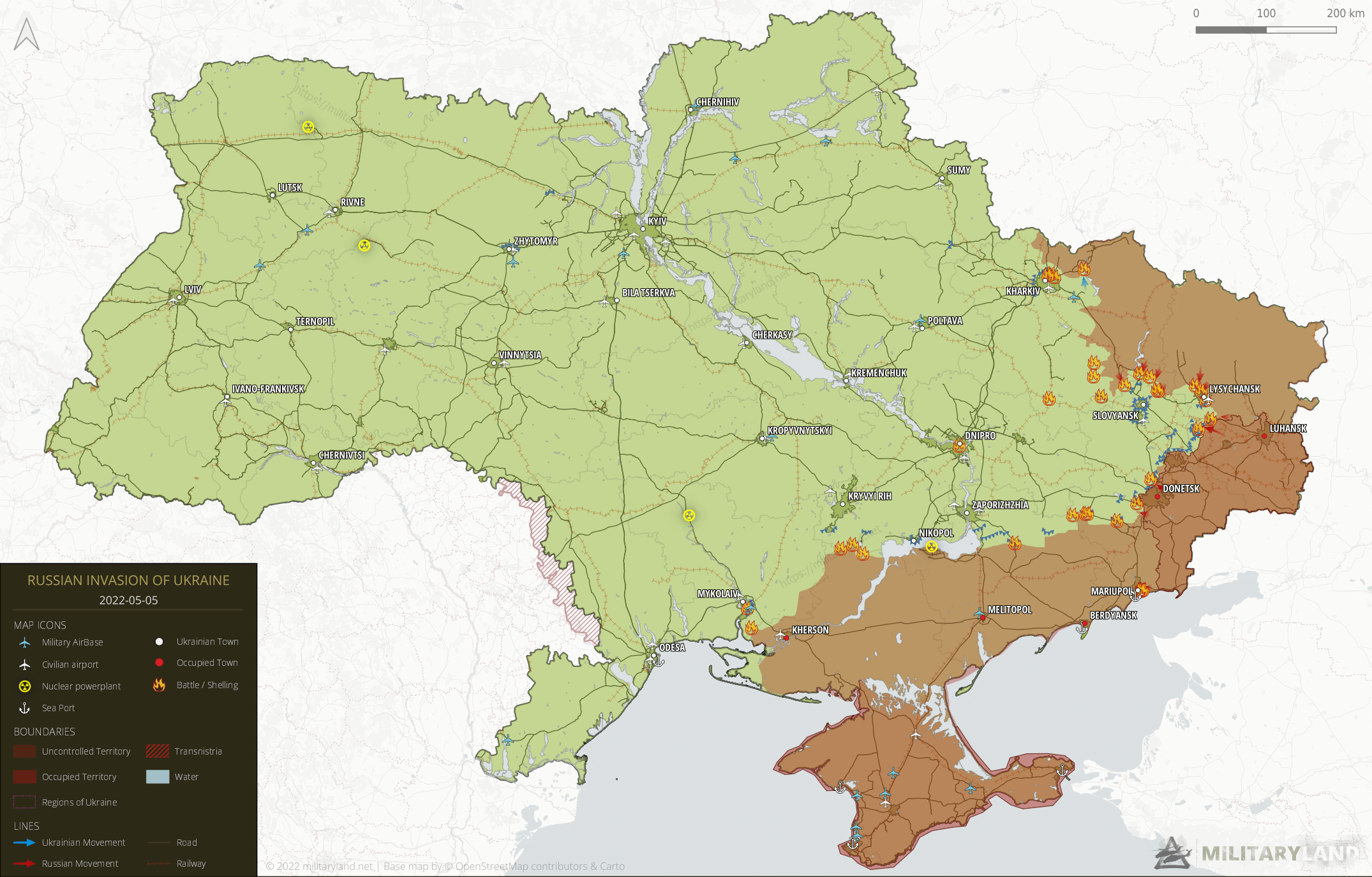 This is time for Ukraine to rain on Putin parade, because mother nature,will rain on his parade on May 9,Putin Plane Flights Google RA96020 Flightaware

This war will go down as one of the most dysfunctional war ,in the history of the world,lots of people say the war is senseless, Ukraine is being attacked by a country , Russia,that paying Ukraine 6 million dollars a day to transcript gas to people given Ukraine weapon and the same countries are paying Russian by gas money to buy that killing Ukrainian,most people do not know, Ukraine tranship gas from Russia to Europe… Read more »

Yes, it looks like they are either retreating in Kharkiv or Ukraine is just driving them out by force.

I get that Russia is throwing forward a lot of firepower right now and doing a lot of damage. But one still has to wonder, is this all they’ve got? They’re likely rushing their offensive for a couple of reasons. Putin demands results from the army in Ukraine to give him the talking points at home and May 9 looms large for him right now. And Russia knows that Ukraine is currently being armed and… Read more »

Thank you for your great work. For information, French newspapers often quote you.

Thing is if azov surrenders they will be killed. You cant trust russia. Better to die gun in hand than raped tortured and then killed.

uncofirmed: frigate Admiral Makarov may have been hit and sunk by a Neptune missile.
https://twitter.com/sentdefender/status/1522349841807986688

Still no news about it, maybe it’s not true. But it’s funny that the Russians are losing the naval war… against an enemy without any ships. lol
Even that, Russia fail.

there is nothing “funny” about that war, people are dying…
sooner or later, Russia will start to realize how wrong that war is…

Another great mapping source, using quite a bit of satellite picture analysis, as such rather complementing than competing with your work. I draw particular attention to his fifth post in the thread, stating: “In Kherson, a small number of villages have also reportedly been recaptured by Ukrainian troops in the past few days. The villages have not been named, and therefore cannot be mapped, but official statements claimed fighting was occurring in the vicinity of… Read more »

Your work is getting recycled here:

Thanks for the updates

Suggests that Makarove (NW of Charkiw) may be back in Ukrainian hands, or at least contested. Although I concede that possibly some more detailed information is required in order to figure out the situation on the spot.

I’m a bit surprised with the announced counter-offensive near Izium. That seemed to be one of the few spots where Russia has had any success, although very very limited. Maybe Russia overextended in the area, expanding in all sorts of directions and Ukraine is looking to take advantage of the overextension. Or maybe Ukraine is looking to send some free units to cut off or push some of the weaker Russian units to thwart the… Read more »

It has to be said… With the Russians attempting to turn Donbas into a caldron, they’re creating an increasingly pointy salient at Izium. While it’s flanks are largely protected by natural barriers, they are open in some places, and Ukraine can bring increasingly deep fire along the entire western flank of this salient – as they look increasingly like they’re doing. So long as they don’t over extend, they really only need to bring themselves… Read more »

Russian losses of material, as reported by the Ukrainians, have gone up significantly over the past days, and most of these losses appear to have occured in Kharkiv oblast. 22 Russian BTGs are thought to be amassed around Izium, which is quite some crowding. Without much space and terrain for cover, that makes great targets for Ukrainian artillery, recently reinforced by western supplies. Judged by the various videos that have been circulating over the past… Read more »

According to locals, in the village called Khotimlya in Kharkiv oblast which is located roughly opposite from Staryi Saltiv on the other side of the reservoir Russians started looting expensive houses and stealing cars. A few people thought that it might mean that they are getting ready to retreat from that area.

UA put a bridge on the river west to izium. They have access to the swamp.

They say 45 days is the timeline,that a soldier should state on the battlefield,that they become ineffective on the battlefield,why do Ukraine have a training regiment,like the US,6 weeks of basic training, before they are put in a war Google US Military Basic Training

The Russian offensive in the Donbas region is so slow that it seems to be back to World War I. The Russian army near Kharkiv even abandoned Stary Saltiv,maybe they don’t have enough manpower.

PS: I’m not American or European, and people in my country have a lot of online arguments about which side is right.

I wonder if the counter-offensive near Kharkiv will threaten the supply lines of the east or at least draw in Russian soldiers away from the east to manage the Kharkiv front.

LOL, which country would have arguments as to who is right? I mean, it is so clearly obvious that Ukraine is defending against a killing and raping aggressor.

The Orcs of Mordor.

Don’t underestimate Russian propaganda. Even in our country there are people who do not have a clear opinion, who say that it does not concern us, or even side with Russia. At the same time, our country has experience with the Soviet Union (and Russia is no better), I’m not so young that I don’t remember the Soviet troops leaving us. I do not understand the attitude of these people, I do not understand it,… Read more »

I think the point was that it SHOULD be perfectly obvious as one country has invaded another to blow up their towns and rape and pillage among the people. It takes a whole lot of ignorance and a whole lot of stupid to imagine that Putin is in the right here.

I like more the UN council votings. They are better to understand. According to those only 5 (!) countries in the world supporting Russia. Countries like North Korea for example.
Even countries like China remain neutral.
So the expectations of the view to Russia are quite clear. But Russia has A Boms and a mad dictator and is inhabited of heavily threatened and manipulated people

You’ve got to be kidding.

You do know that Russia is killing, raping and stealing from those same people they claimed they were coming to help, right?

ok…I guess ur Chinese,I have friend in Beijing who tell me a lot of Chinese are fighting over whether to support Russia or UKraine

It is back to WW1 in a sense. There might be very little change on the ground but the battle for Donbass is in full speed. Russia’s plan is to break through the lines, take the key points and cut off/destroy the Ukrainian army. Ukraine’s plan is to withstand the attack, mostly it’s a static defense, but they are trying to counter attack too e.g. at Stary Saltiv. As of now the forces are in… Read more »

Ukraine economy is a victim of this war, Russian has cut Ukraine fuel supplies to the point,it has to be rational,for the public, economy and war,and their not enough fuel to go around for everyone, Ukraine can strike crippling blow by attacking Russian command and control base 14 miles,from the Ukrainlan borders in Belgorod

Sorry but seems russian army is going to collapse before ukrainian. And really dont know where you find info that russian is outnumbered? They have much more troops than ukraine and they bring everyday even more. Counter attack east of izium is gonna wreck havoc on russia and blowing that frigate is another big morale loss. Really wonder what russian narrative on 9th day will be. How in the earth they are gonna turn this… Read more »

It’s simple. The Russians didn’t declare any mobilization (not yet at least). Ukraine did. Do the math.
Counter question – where did you get the info that the Russians are bringing in new units? I would assume this is kind of classified info. Having said that I am assuming that they are very likely to rotate the troops regularly

When Russian troops invade and kill every living thing for no reason , and u say you don’t know what is right or wrong , there is something wrong