The summary of the seventh day of Russian invasion to Ukraine.

Russian forces captured the first regional capital and are advancing towards Slovyansk from the west. Ukrainian recaptured a town near Kyiv but Donbas, and mainly Mariupol, is approaching a critical stage. 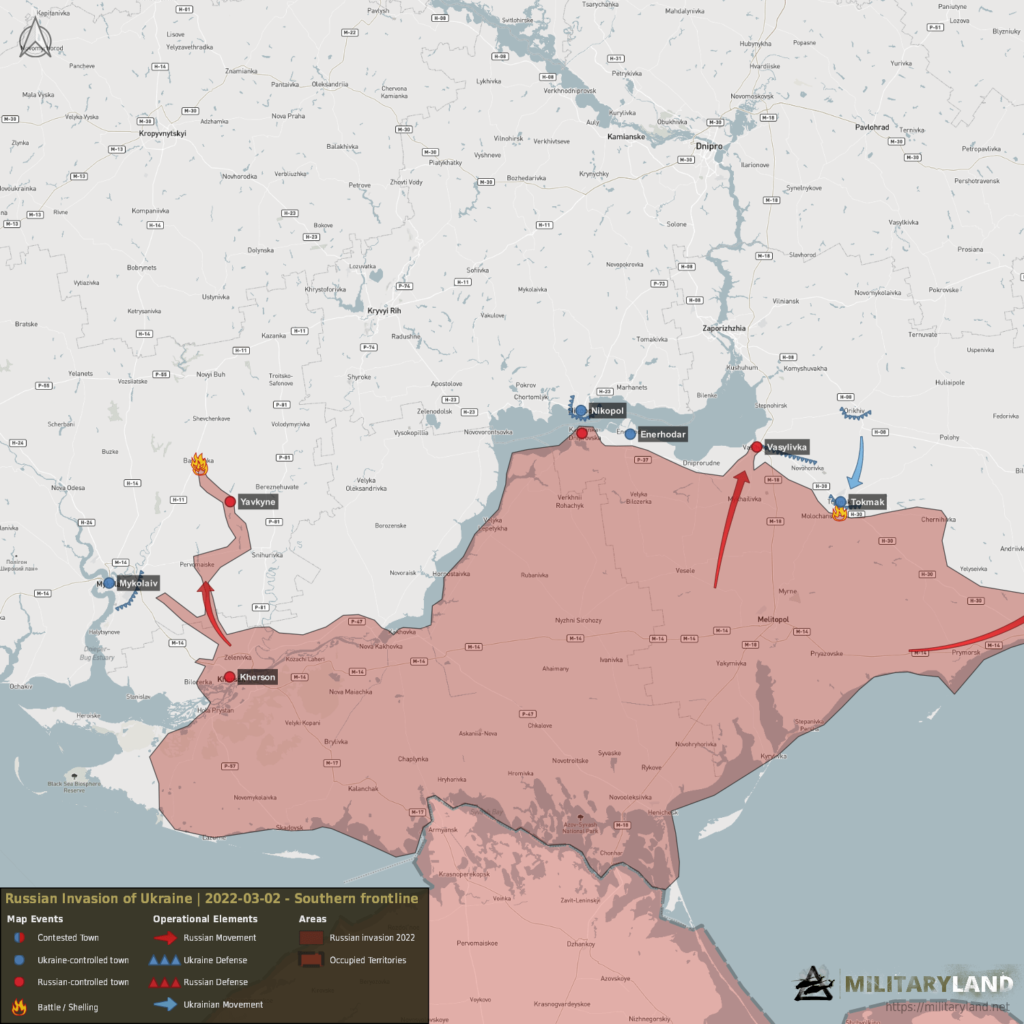 Soon after the midnight (Kyiv time), Russian forces captured the Kherson city hall and announced the capture of the city. It is the first regional capital captured by the Russian side.

Russian troops landed near Mykolaiv, but were eliminated or captured by Ukrainian forces. Apart from sporadic shelling, there was no attack on the city itself. The spearheading element still roams in the north of the city, the location is unknown.

Russian forces captured Kamianska-Dniprovska and Vasylivka. Ukrainian forces blew up a railway bridge in Vasylivka yesterday, which complicates the Russian advance to the north. Local Ukrainian self-defense force guards Enerhodar, but there is no military presence, and they are encircled. 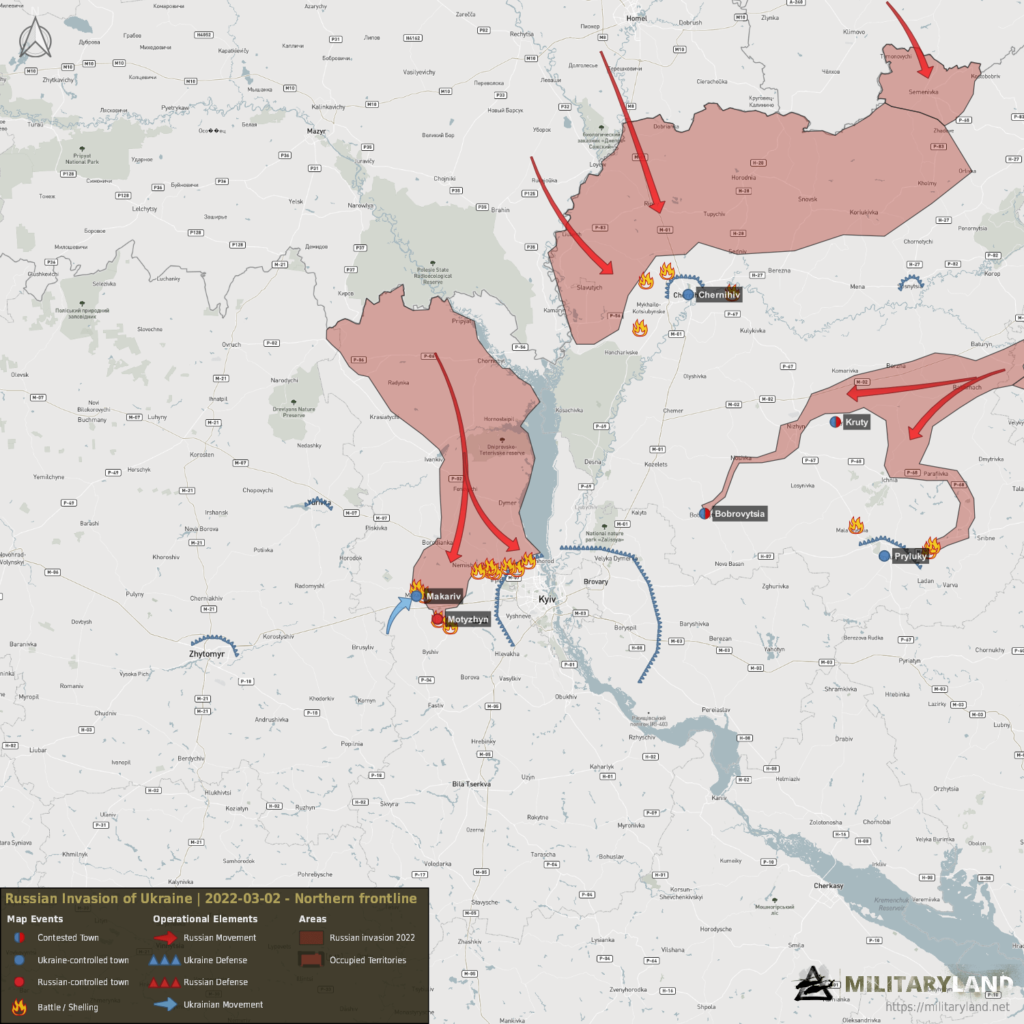 The large Russian column hasn’t reached its destination yet.

No changes, Ukraine Army continue to defend the area.

Ukrainian forces ambushed an enemy convoy near Kruty and destroyed several vehicles. Russian forces claim they reached the outskirts of Brovary, but we’re unable to confirm it. 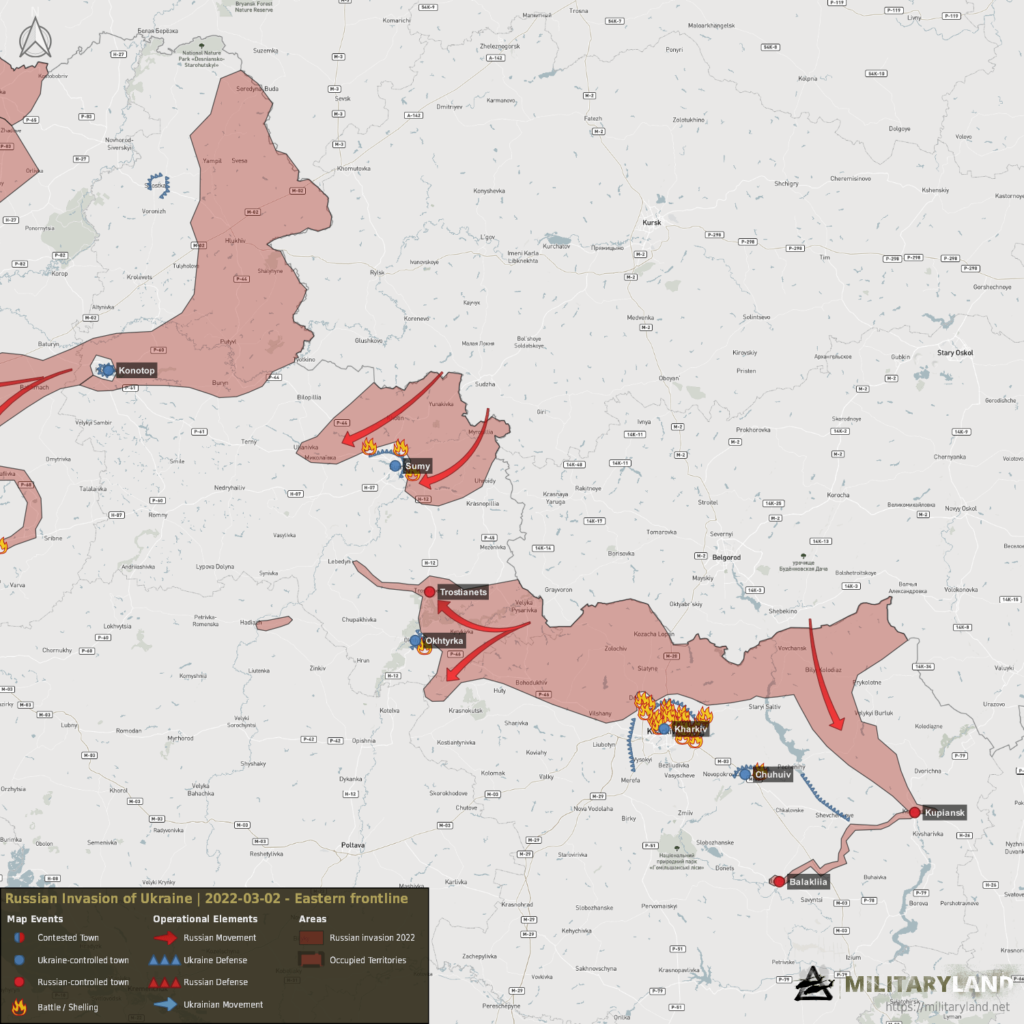 Ukrainian defense line are still holding. There are most likely some Russian elements moving around the region, but there is no footage.

Ukrainian self-defense force in Konotop received a warning that either they surrender or the town will be leveled.

The center of Kharkiv was shelled today and numerous buildings are heavy damaged. The Russian spearheading force flanked to the east, captured Balakliia and reportedly heading towards Izium. If Ukrainian forces won’t stop this spearheading force, they might soon reach Sloviansk and cause huge problems for the forces in Donbas. 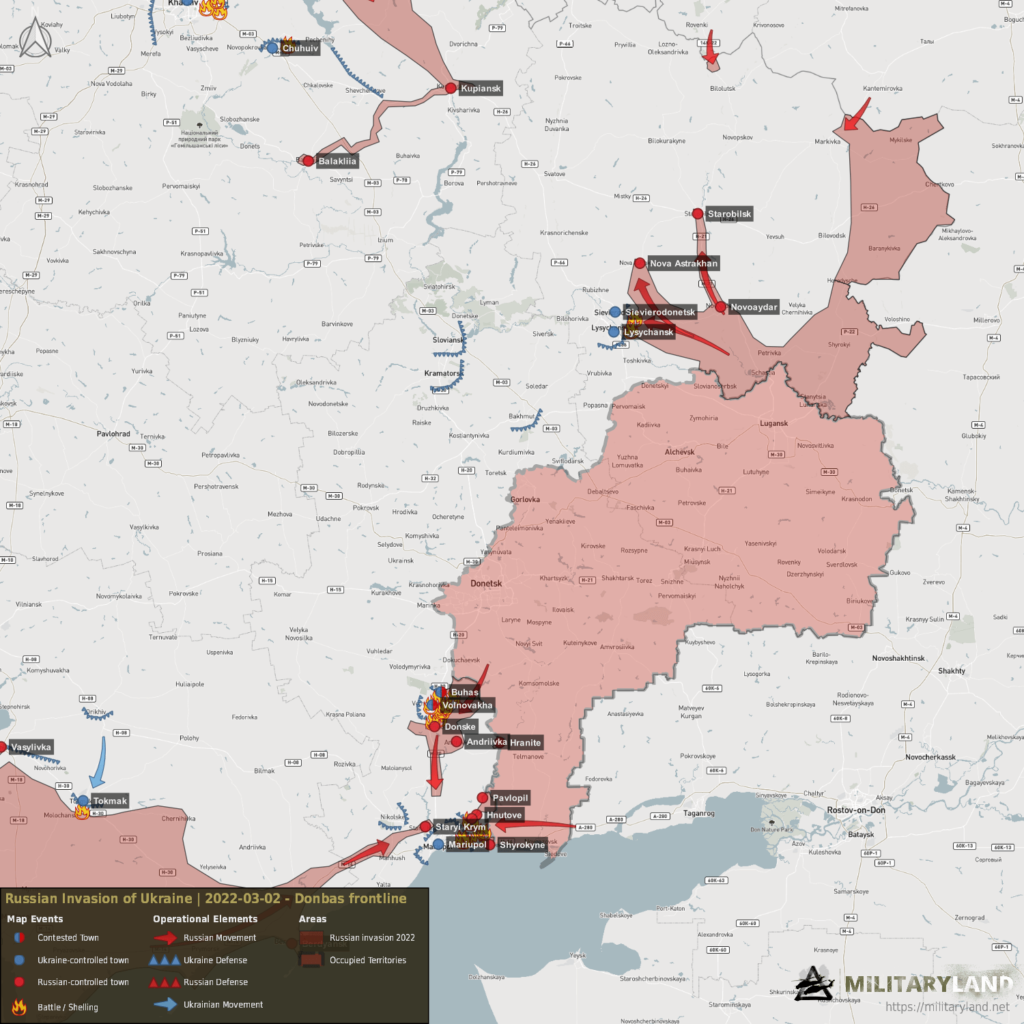 Russian forces claim they reached Svatove, connected with the forces in the north, and encircled remaining Ukrainian troops near Bilovodsk. We cannot confirm any of this, and it might be just propaganda.

Russian troops advanced inside Volnovakha, and captured most of the town. According to Ukrainian sources, Volnovakha is almost completely destroyed. Ukrainian Forces lost one BMP-1 and at least one tank during the battle.

Mariupol was under heavy shelling all day, but Russian forces haven’t started the assault yet. Heavy damage is reported inside the city, including a dozen civilian casualties. 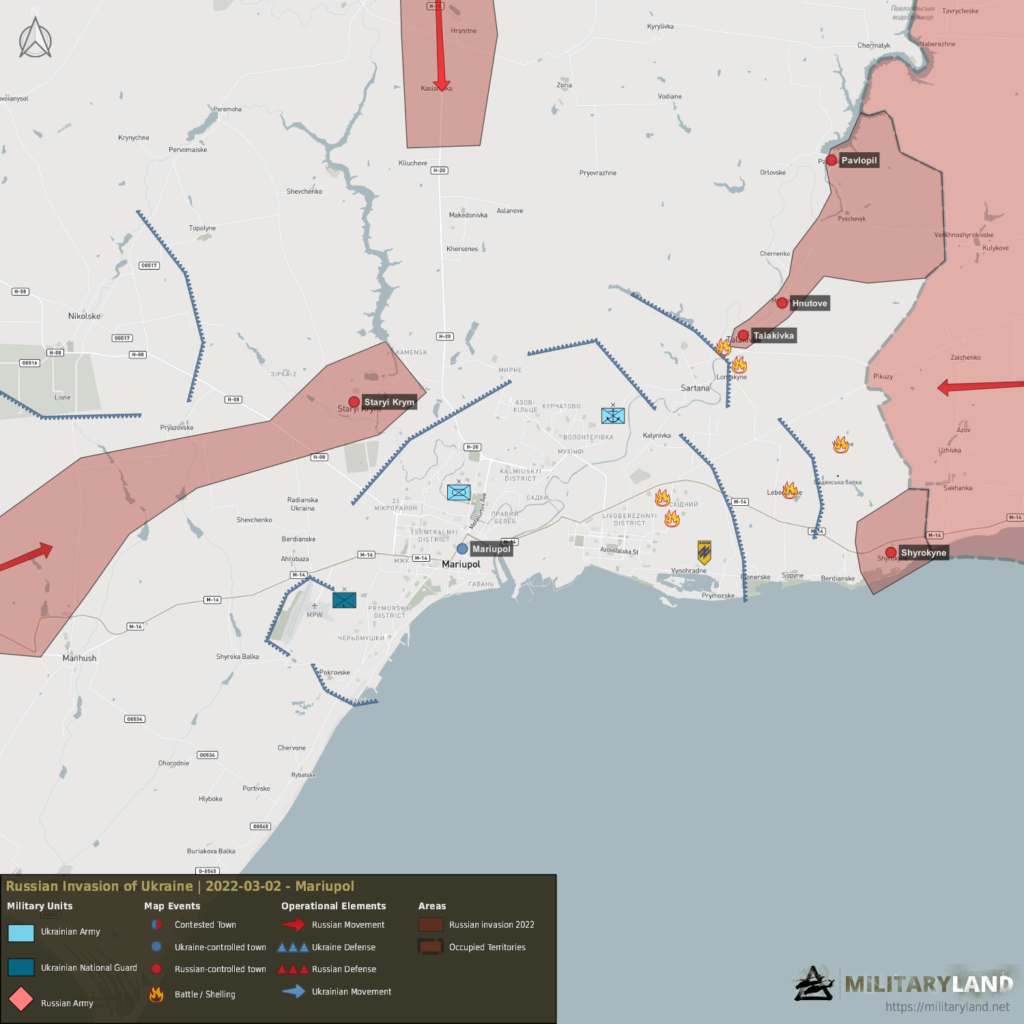 Hello! I live in Russia, but I am opposed to this war and Putinism. I also try to follow the situation and write posts on one neutral military forum. I must say that you have great reviews and great maps, and I use them in my posts, giving links to you. Therefore, I have a big request to you. Please do not place the locations of the Ukrainian Army and the Ukrainian National Guard on… Read more »

They are approx location based on publicly available information.

Thank you all for your kind words! I appreciate it.

VERY well done.
keep it up!

Thank you for the addition of the legend. The Russian’s progress is disturbing, but maybe not surprising in some areas. Good heavens, it all appears to be taking a very nasty turn, not disregarding the stalwart defense fought by the UAF. Have any reports suggested a possible time of arrival for the Kyiv convoy? (With the understanding that it will take time for the units to regroup and concentrate before launching further assaults)

Last reports indicate it run out of fuel/food and is waiting on resupply. No ETA when they reach Kyiv

This is false – it is due to 4 blown up bridges:

That seems a lot more likely.

•Russian 40-mile column is still stuck because of the blown up bridges and cannot progress to Kyiv. They must repair or pontoon the bridges before continue. •But there is an alternative if Russia cannot fix the bridges and get the column moving: When Russia captures Mykolaiv, there will be a 400 mile back-door road to Kyiv. But this will not be simple – a giant Russian column was destroyed by Ukraine Air Force in the… Read more »

Love the reports and the maps keep it up!

Bloody amazing. Appreciate your work and the accuracy

I love your daily updates, keep them coming!