Very little happened on Monday. Russian troops are unable to break through Ukrainian lines of defense to make some meaningful gains. The enemy seems to be in no rush for the May 9 and the Victory parade. 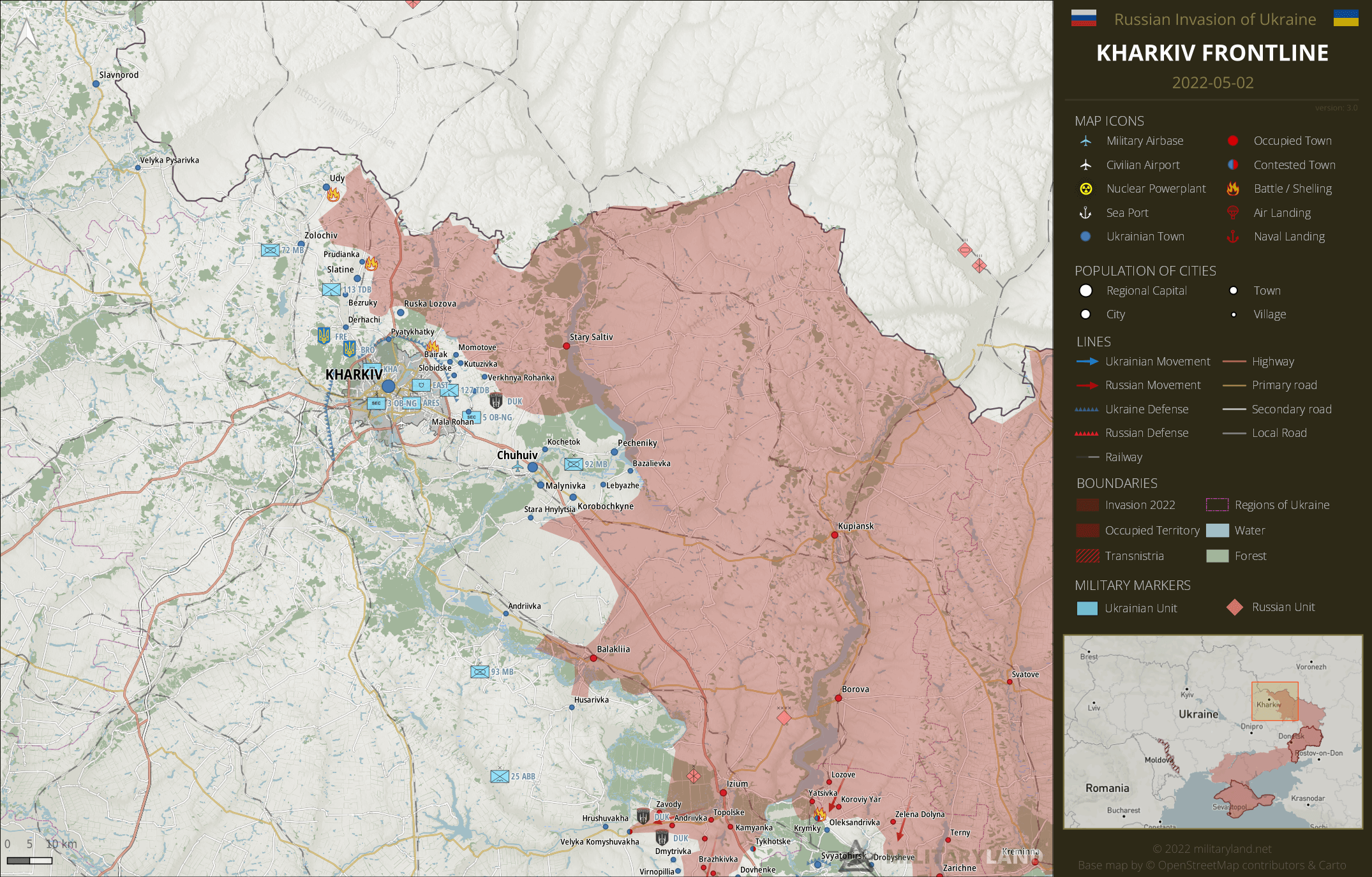 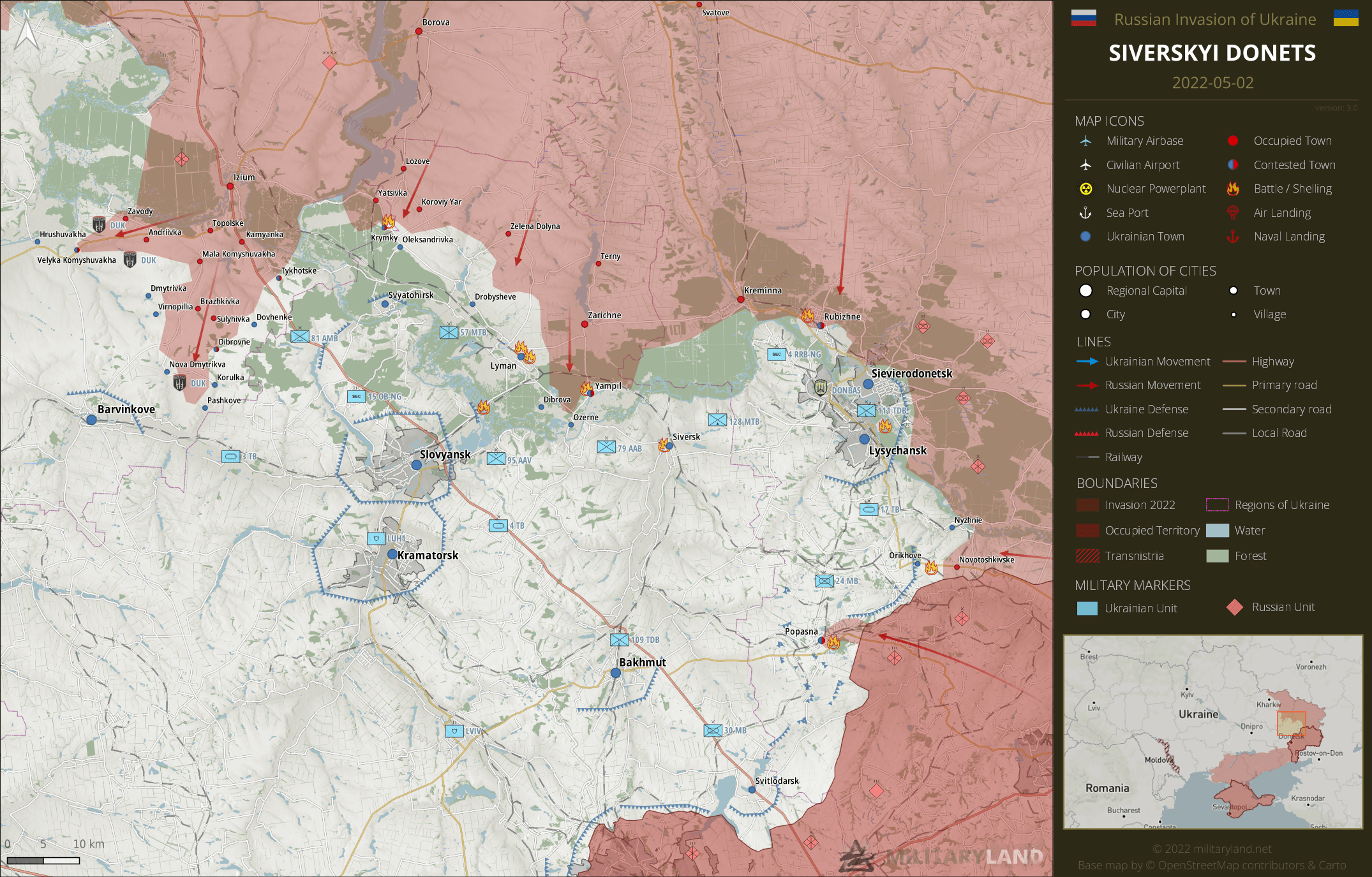 A road bridge connecting Lyman and Slovyansk was damaged by shelling and is unusable for vehicles. Ukrainian paratroopers repelled an enemy attack in the area of Yampil.

The fighting continues in Rubizne and Popasna. Russian army has reportedly transferred some units from Mariupol to the area of Sievoerodonetsk and Popasna to reinforce the attacking force. 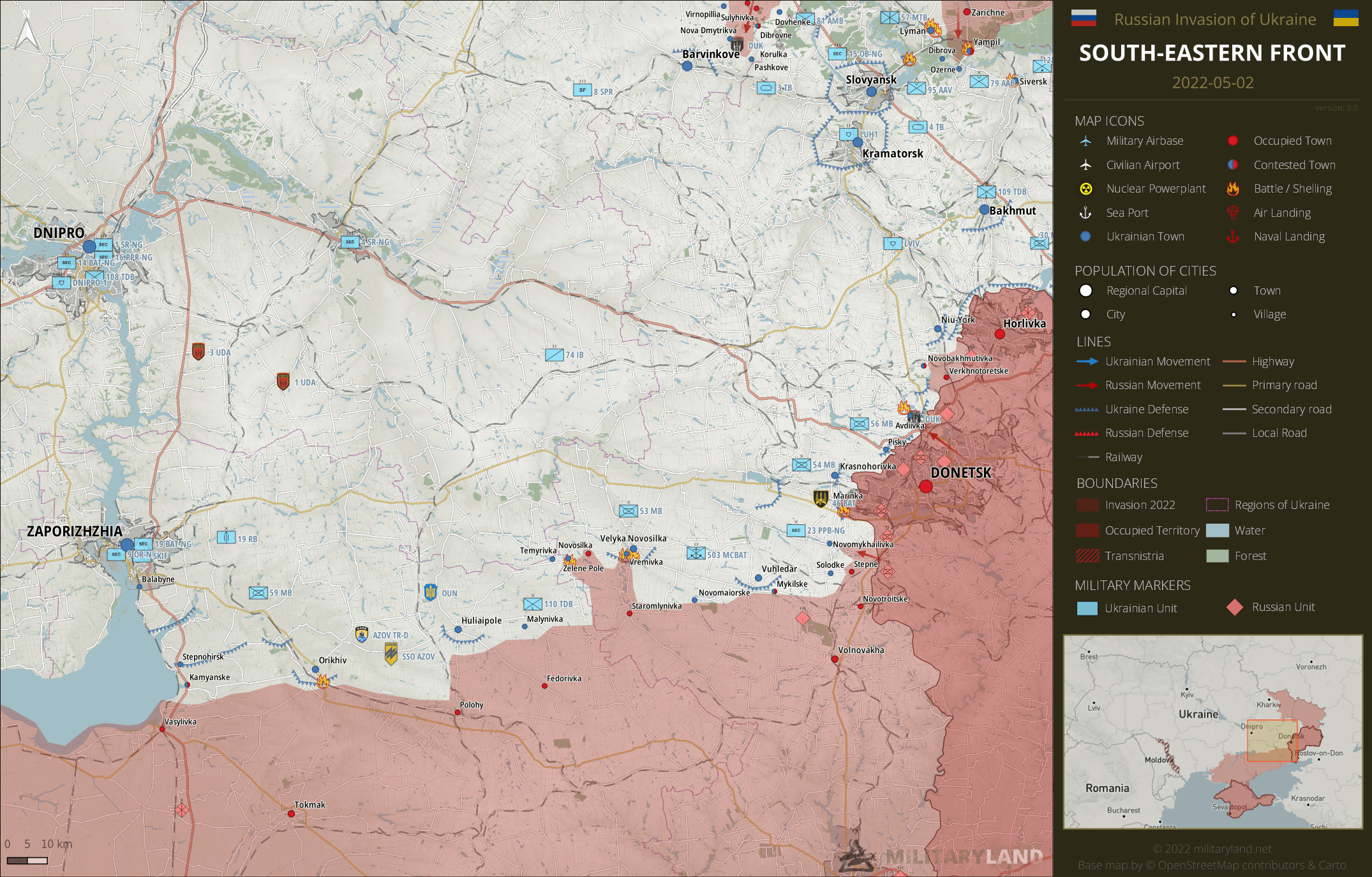 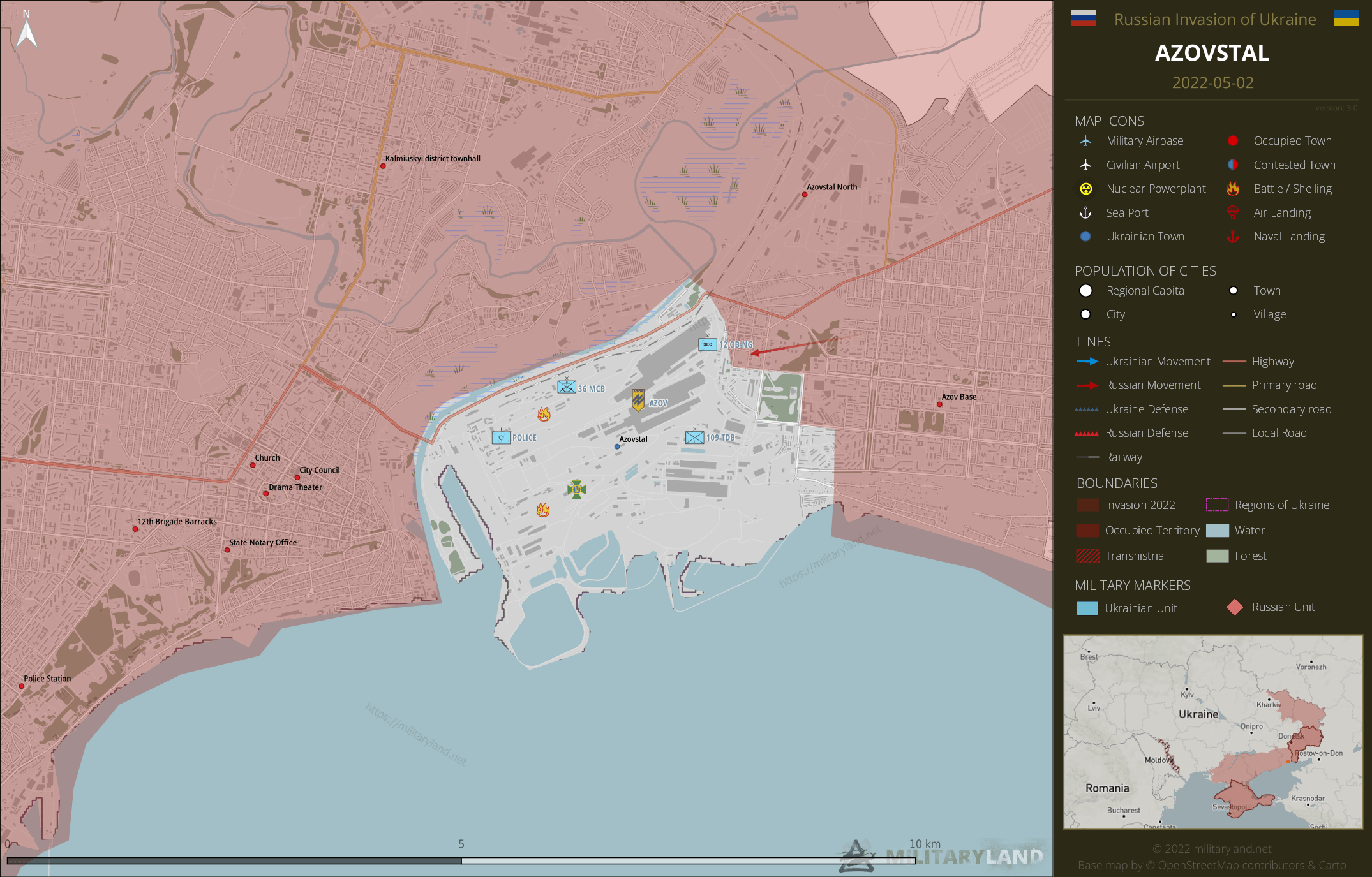 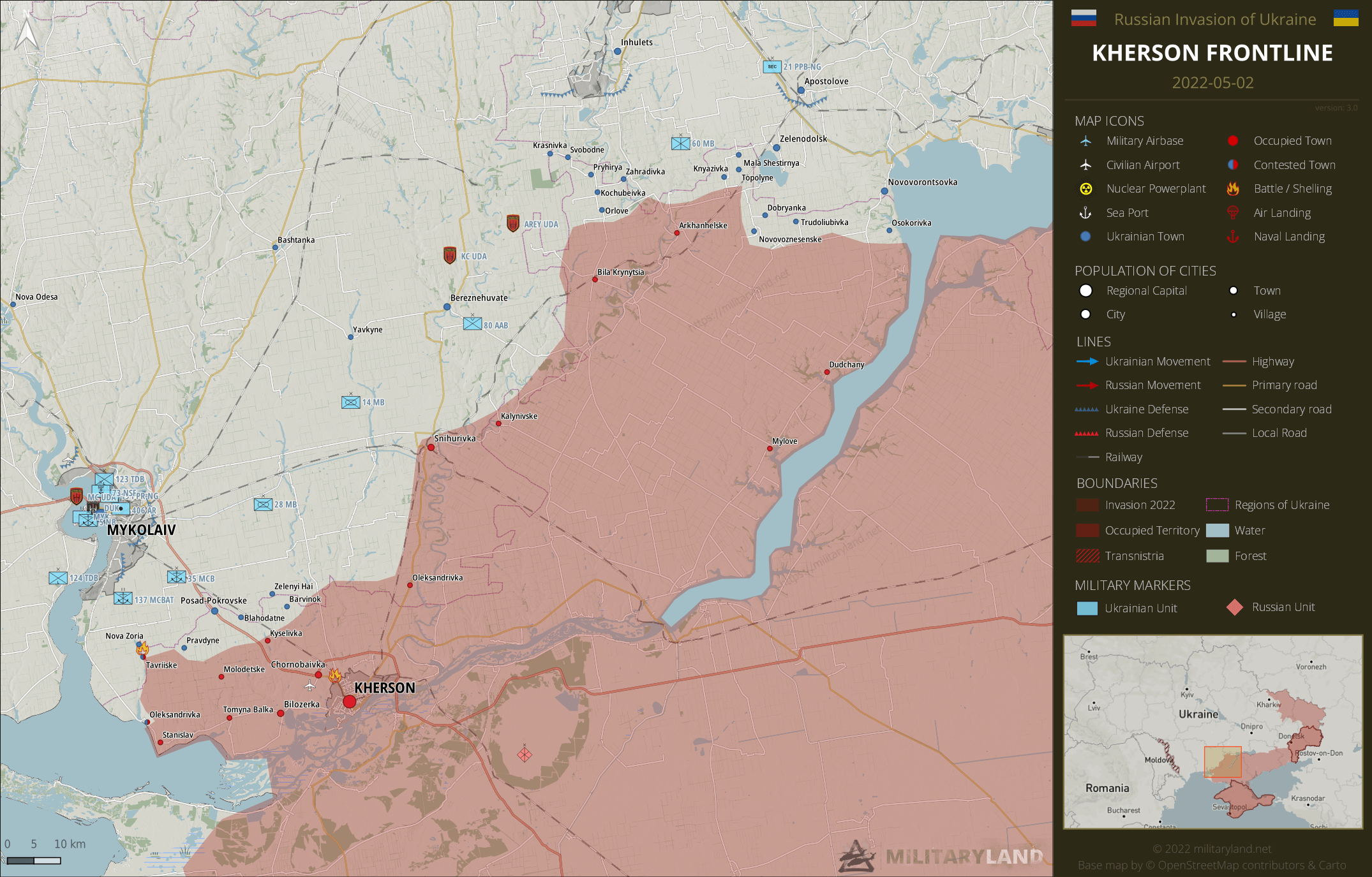 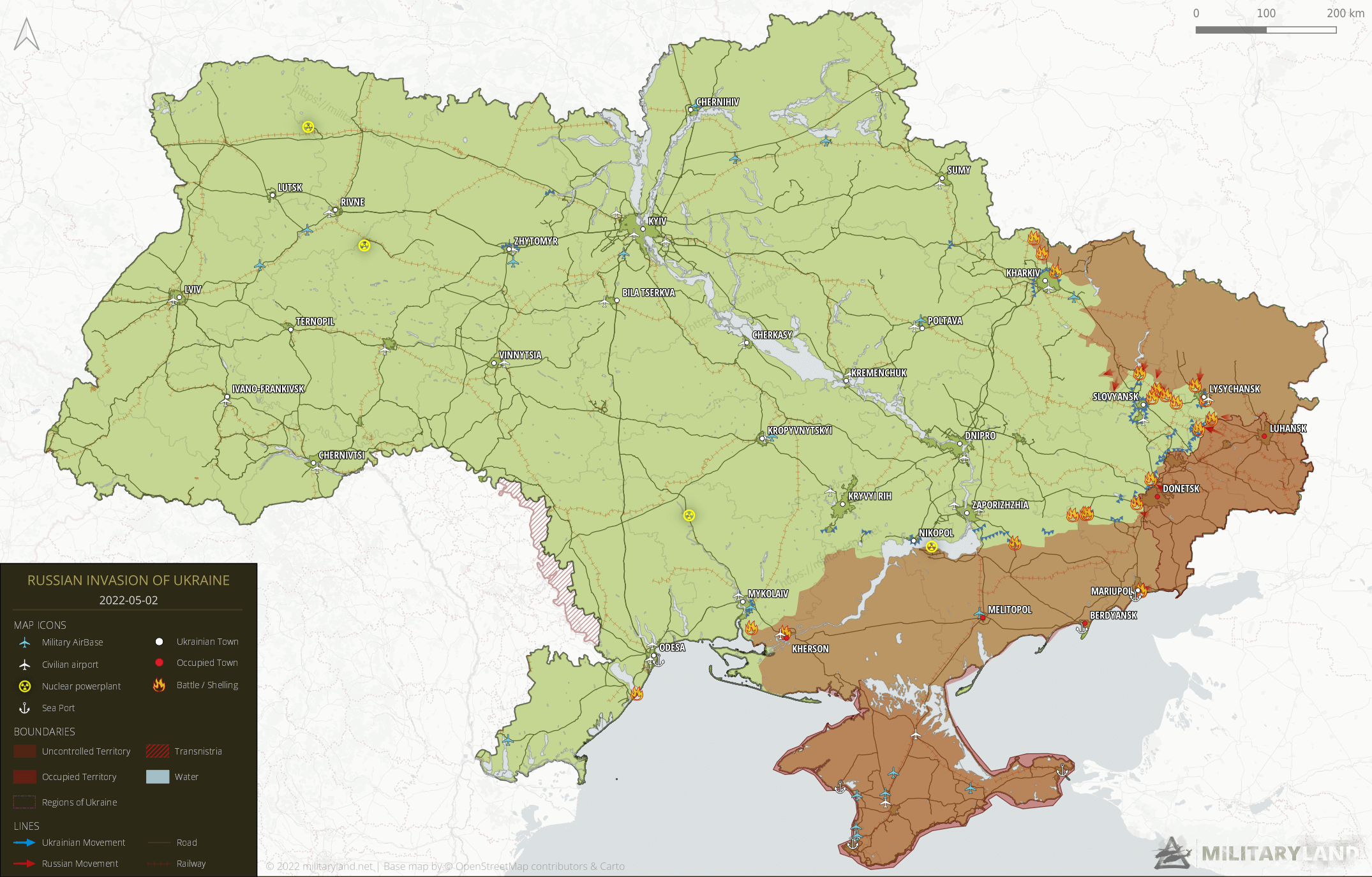 After war, Ukraine would be well inspired to build new cities (leavind old destroyed ones), away from the borders..; Kiev, Kharkiv are quite too close to russia/belarus to avoid direct assault. Also, they will have to build a kind of new maginot line, with rivers, forests, swamps,etang, everything that a tank cannot cross easly, and to supress any large roads/bridges going to Russia. I would suggest the same for Baltic states. These are so small,… Read more »

You never know, after this war ruZZia and belarus might be further away from Kyiv or Kharkiv. 🙂
Also, I doubt ruZZia has 3 milion ground troops to deploy. They lost a lot of frontline troops already and the rest isnt exactly motivated. Hence they are stalled. They can throw more men to the front, but with WWII equipment at best.

I am sorry to tell you, this is not how the world works. You can’t just move all your cities…

If it was true, we would already seen tons of proof from Russia

Trevor Cadieu, who according to Canadian sources was supposed to have received command of the country’s Armed Forces in 2021, had this opportunity thwarted following allegations of sexual harassment by an ex-girlfriend of his in 1994. Cadieu, formally subject to investigation , he withdrew from the Army and only recently decided to go to fight in Ukraine. His name has been associated with Azovstal, but no Russian media reports the news of an arrest and… Read more »

I am highly sceptical about these mysterious underground laboratories myself, sounds a bit cartoonish. And you are right about the General of course, so far it’s only some TG channels reporting it, nothing conclusive

Interesting to see an entire day of no taken cities, at least according to this map. I’m no expert on what is going on, so I would like to hear opinions on whether this temporary stall is from Russia having exhausted its resources or if they’re saving up and waiting for a larger attack.

Could be either, we honestly can’t know. The next days will show

During two last days Ukrainian claimed to effectively bomb and destroy two army-level command centers, near Izum and near Kherson. If it is true, than Ru command should be temporarily distrupted now in that areas. Also note a town of Stary Saltiv to the East from Kharkiv. There were gossips about clashes in this town today in both Ru and UA publics, officially not confirmed though. If it is true, UAF are performing an impressive… Read more »

Yep, and I’m waiting for more details. For now, just gossips, as you said.

I can confirm to you that they are, indeed going for Staryi Saltiv: https://liveuamap.com/en/2022/3-may-ukrainian-army-liberated-molodova-village-near-stary

In the meantime training on the M777 finishes today and internal training and deployment of these systems will begin.

The Russian army seems to have no more troops to send to Ukraine, perhaps on May 9th Putin will announce a national mobilisation.

still about May 9th, I would add to your comment that some people say Putin will declare war to nazism/ukraine that day. Allowing the national mobilization. Also I read in several articles during the last 24h that sometime after May 9th, Putin will have a cancer surgery and during that time he would have to transfer the power to Nikolai Patrushev, head of the Russian federal police’s Security Council. TBH, I’m not sure how serious… Read more »

If you truly believe that the Russian army has sent one million of its active personnel I really don’t know what to tell you. And also the 2 million reservists we forgot about. Putin is never going to announce “national mobilisation”, as only 20% or less of the whole army are actually being used.

If you realy believe that russian army has one million activ personnel to sent , I realy dont know what to tell you.

of these 900,000 men and women, about 250,000 are conscripts who are normally assigned to support missions, logistics and internal security, while the remaining 650,000 active soldiers make up the operational force of this army. Among these, only 300,000 men and women belong to the Russian ground forces, to which must be added the approximately 75,000 paratroopers of the airborne forces. The air forces, which bring together the Air Force, but also the space force… Read more »

Russia is a huge country and must defend its long borders, as well maintaining limited operations in other countries around the world. It can’t simply deploy all available troops in one place. It doesn’t even have the logisitical capacity to do this in the first place. If it tried it would be a chaotic mess and only add the logistical failures on the frontline by diverting valuable resources away from where they’re needed most. Russia… Read more »

You’re right, he doesn’t need to mobilize but he does need a reason to declare war to send those 3 million in.