Russian forces have made gains in the area of Lyman and Velyka Novosilka, but the progress is relatively slow. Ukrainian troops continue its defensive war and prepare for possible Russian offensive operation towards Kryvyi Rih and Mykolaiv.

In Russian Kursk Oblast, saboteurs blow up a railway bridge. 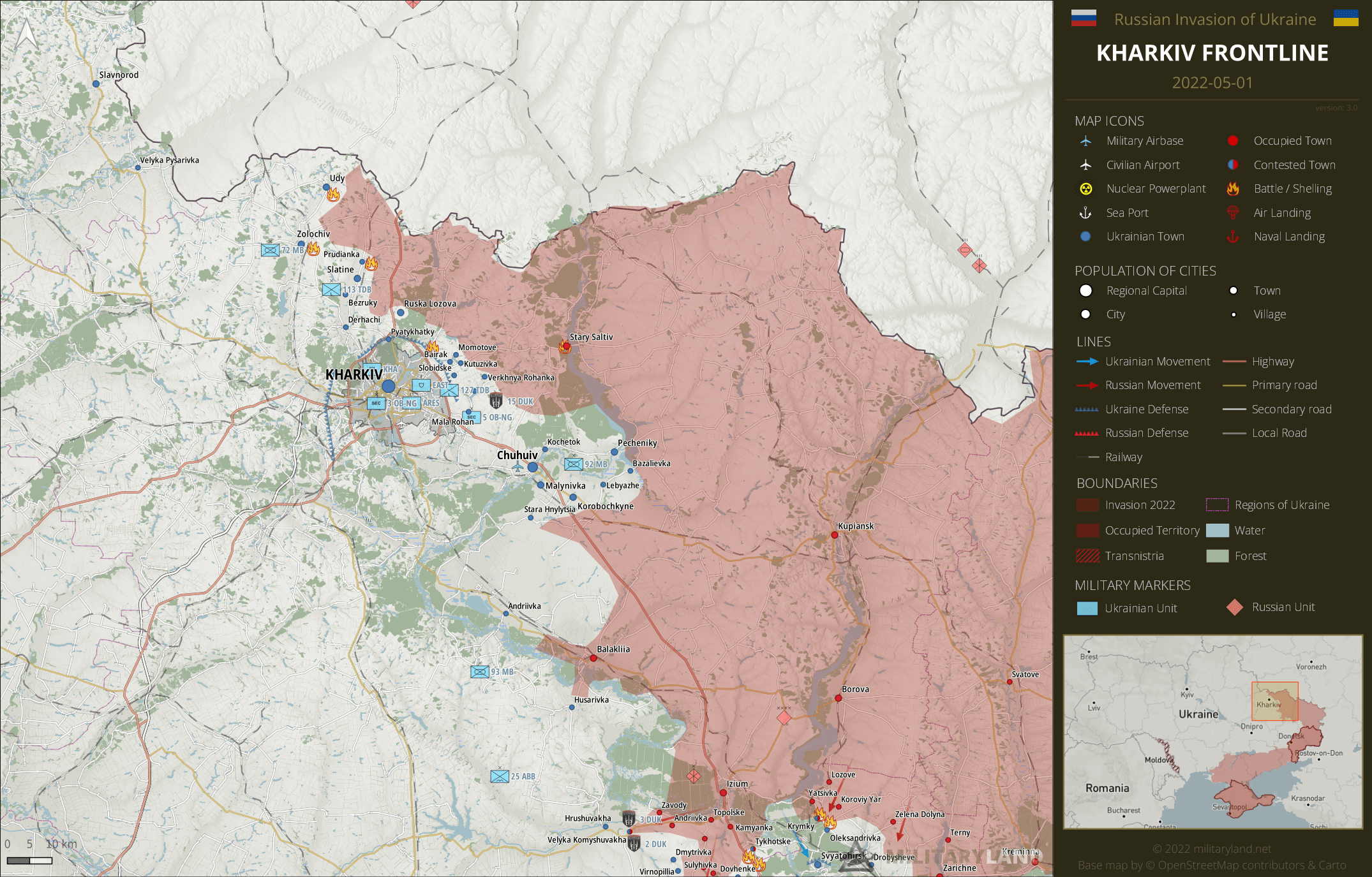 Ukrainian artillery shelled Russian positions at Stary Saltiv and the town might soon be a target for Ukrainian offensive in the area. Just to remind you, the bridge at Stary Saltiv was destroyed in early March. 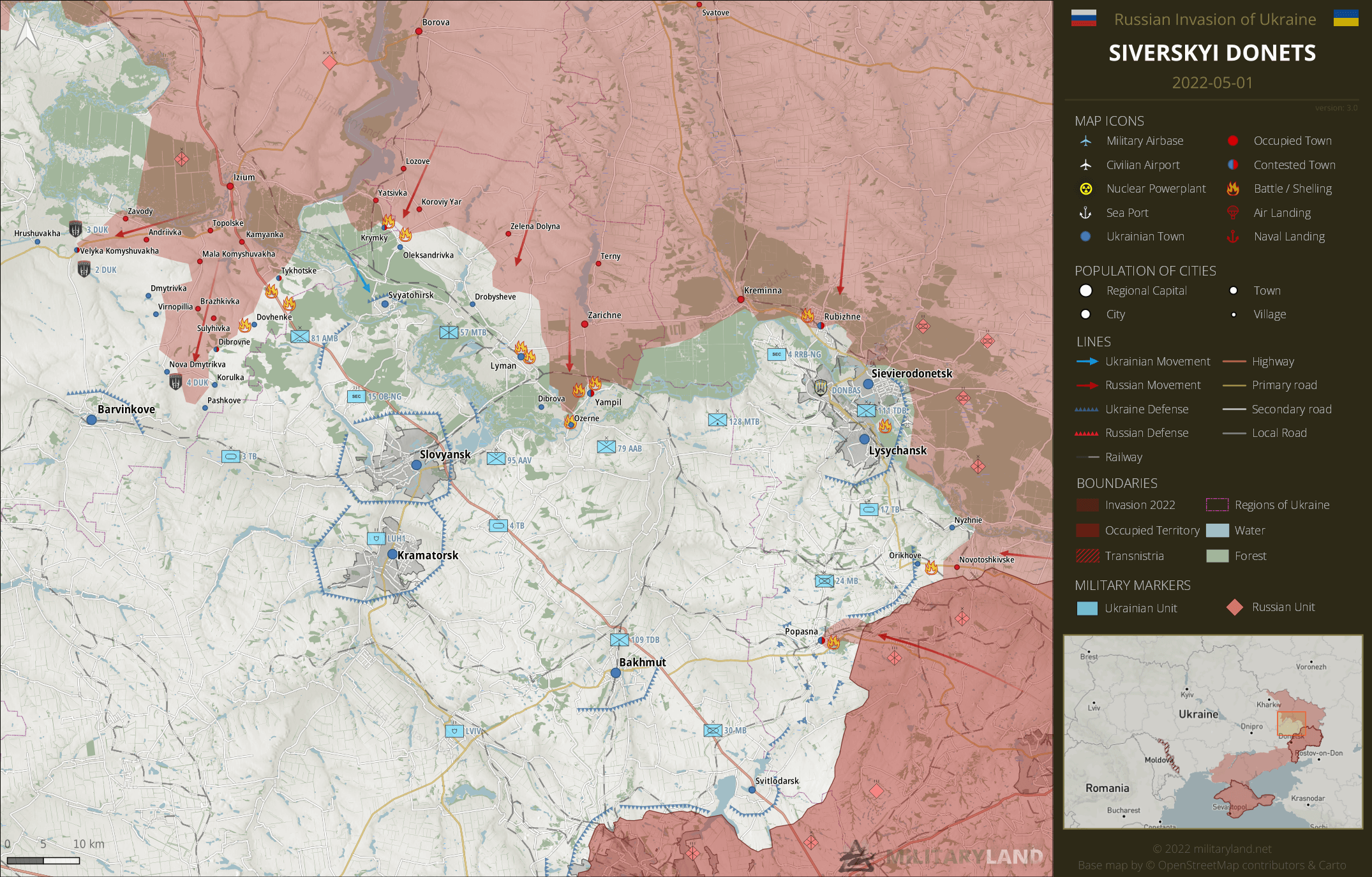 Russian troops captured Yatsivka, Koroviy Yar and are advancing in the direction of Krymky and Oleksandrivka. Ukrainian elements of 81st Airmobile Brigade have withdrawn from the area west of Yatsivka to Svyatohirsk.

In the area of Lyman, Russian troops are advancing towards Ozerne through the forests. The situation at Yampil is unclear at this moment. The fighting continues in Rubizne and Popasna. 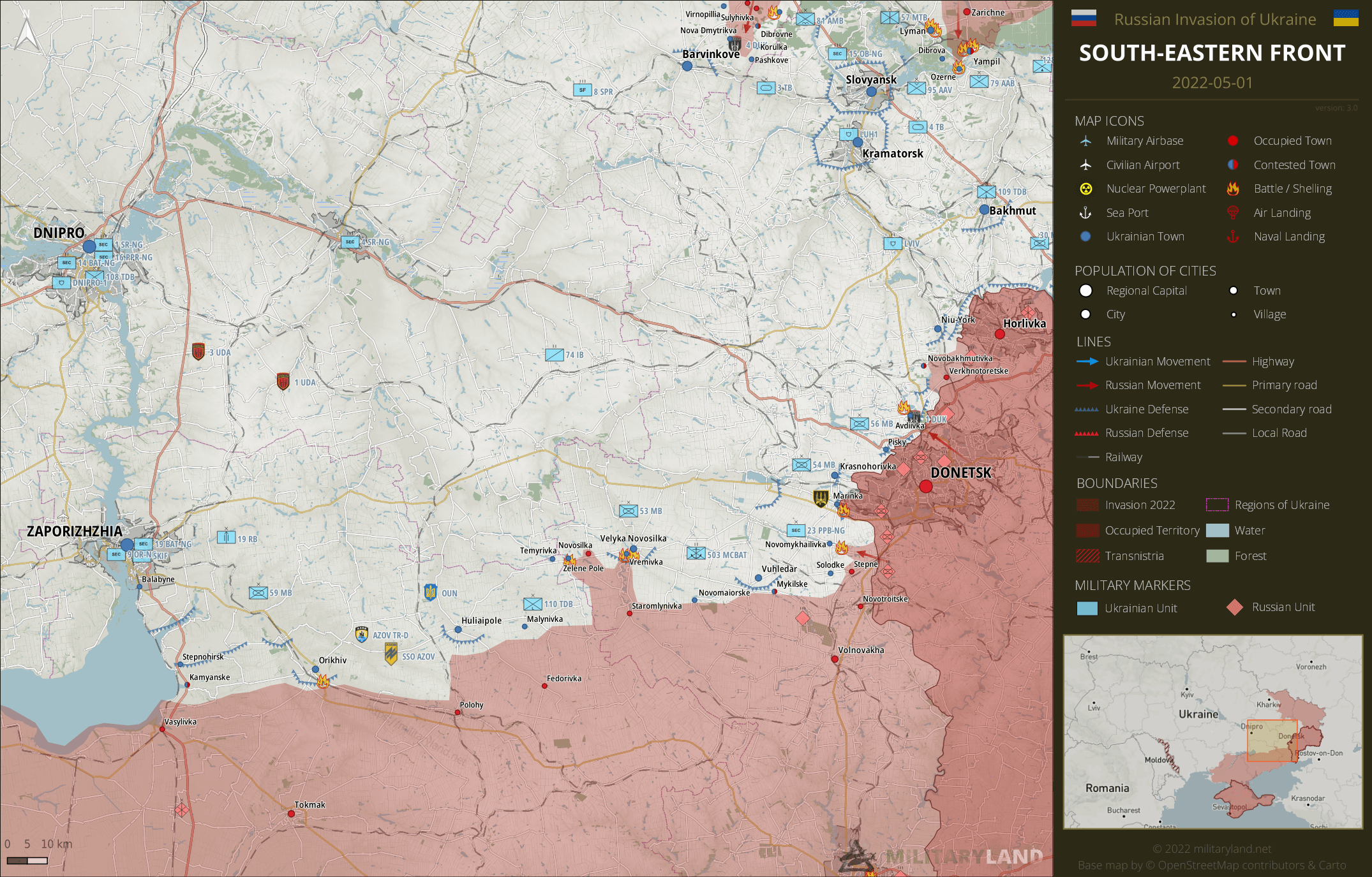 Russian troops have advanced towards Velyka Novosilka and reached the outskirts of Vremivka. The Russian attempt to break through Ukrainian lines at Novomykhailivka and Marinka wasn’t successful. 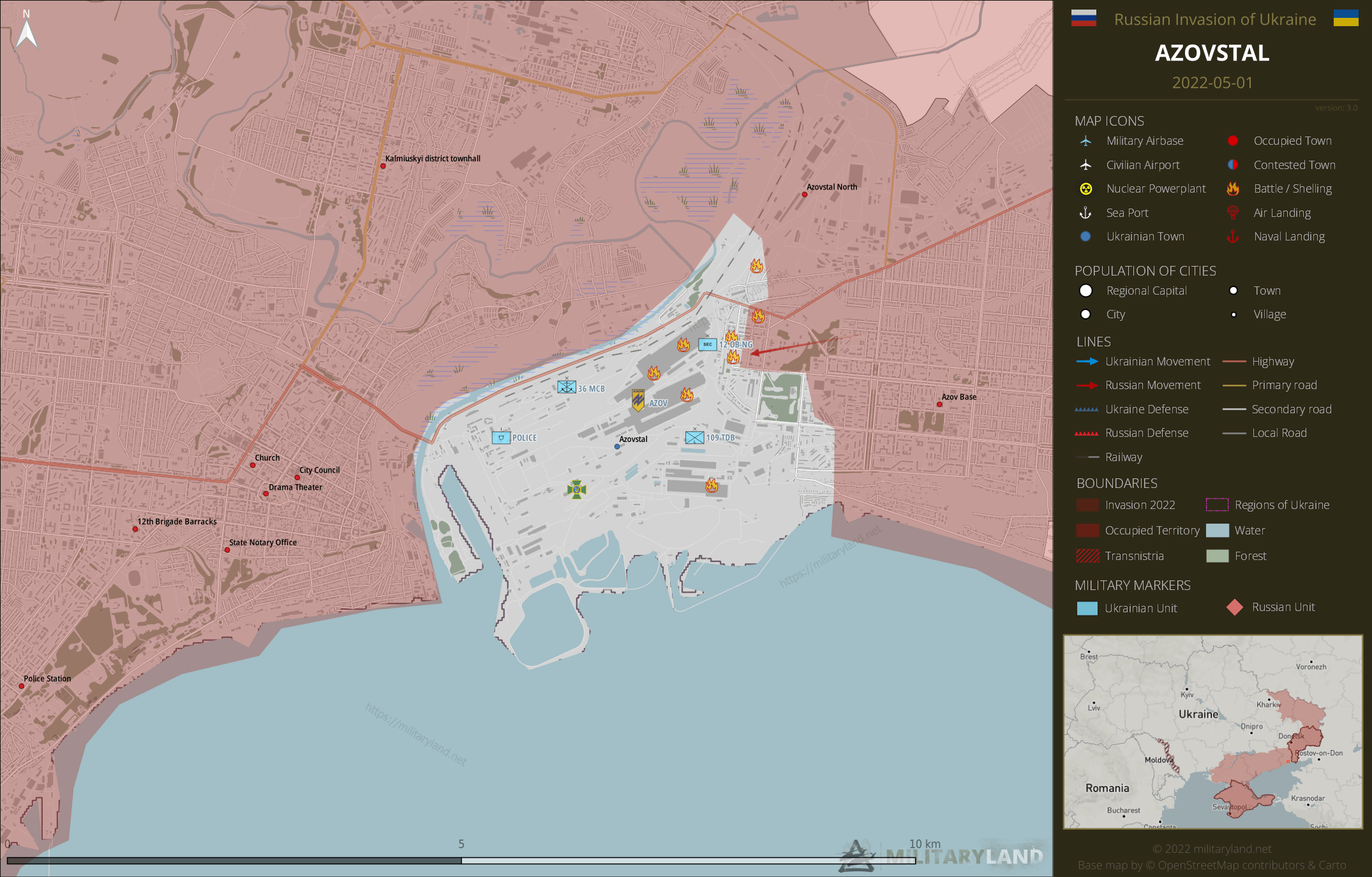 More than 100 civilians have been evacuated from the Azovstal plant today. In the evening, immediately after the agreed ceasefire ended, Russian troops attacked the plant. The evacuation should continue tomorrow.

It has become known that an element (possibly a battalion) of 21st Brigade of Ukrainian National Guard defends Azovstal plant alongside other Ukrainian units. 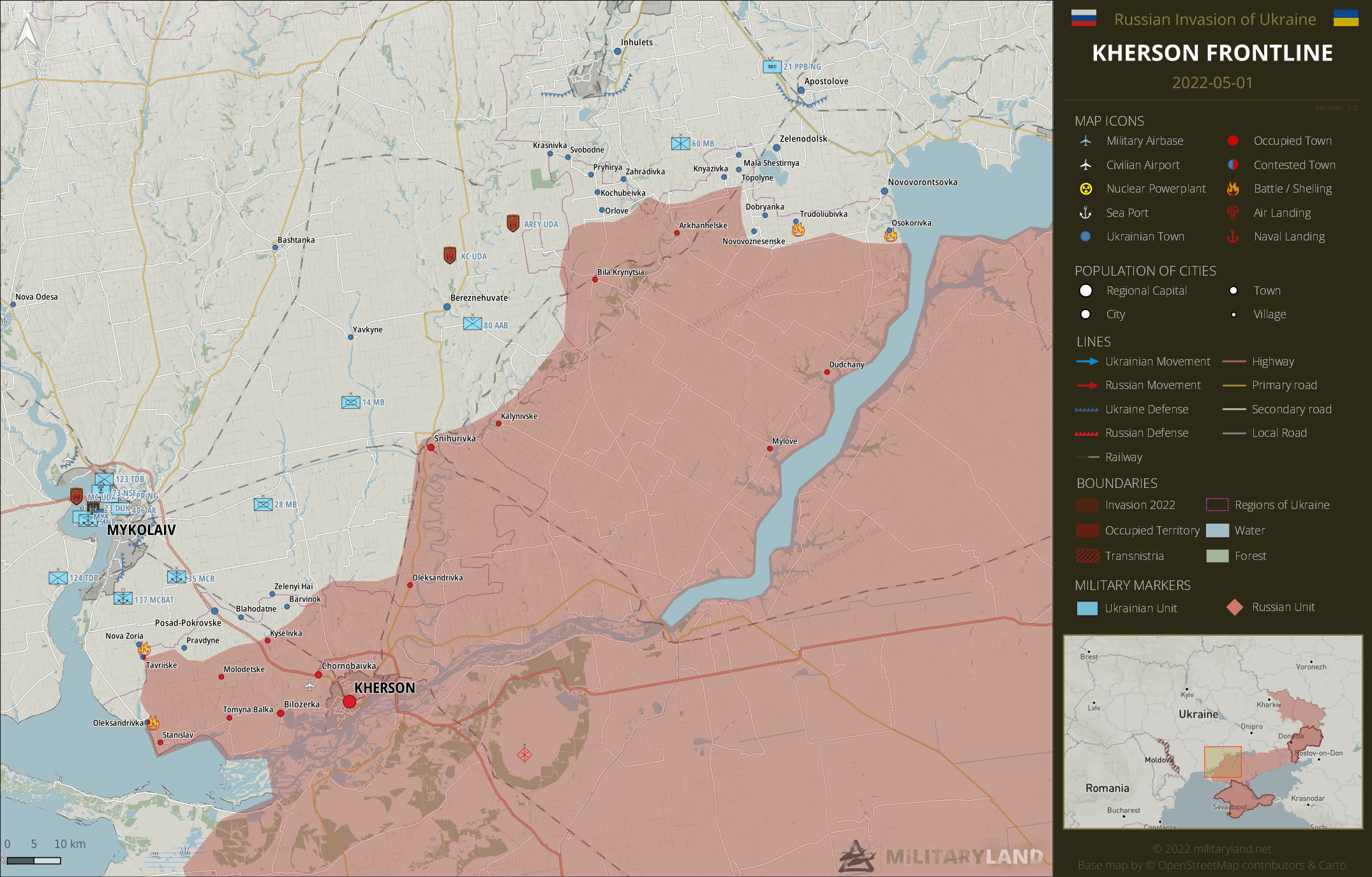 There was no change on the ground in Kherson Oblast. Russian troops are reportedly amassing more and more forces at the regional border of Kherson and prepare to launch an offensive operation towards Mykolaiv and Kryvyi Rih. 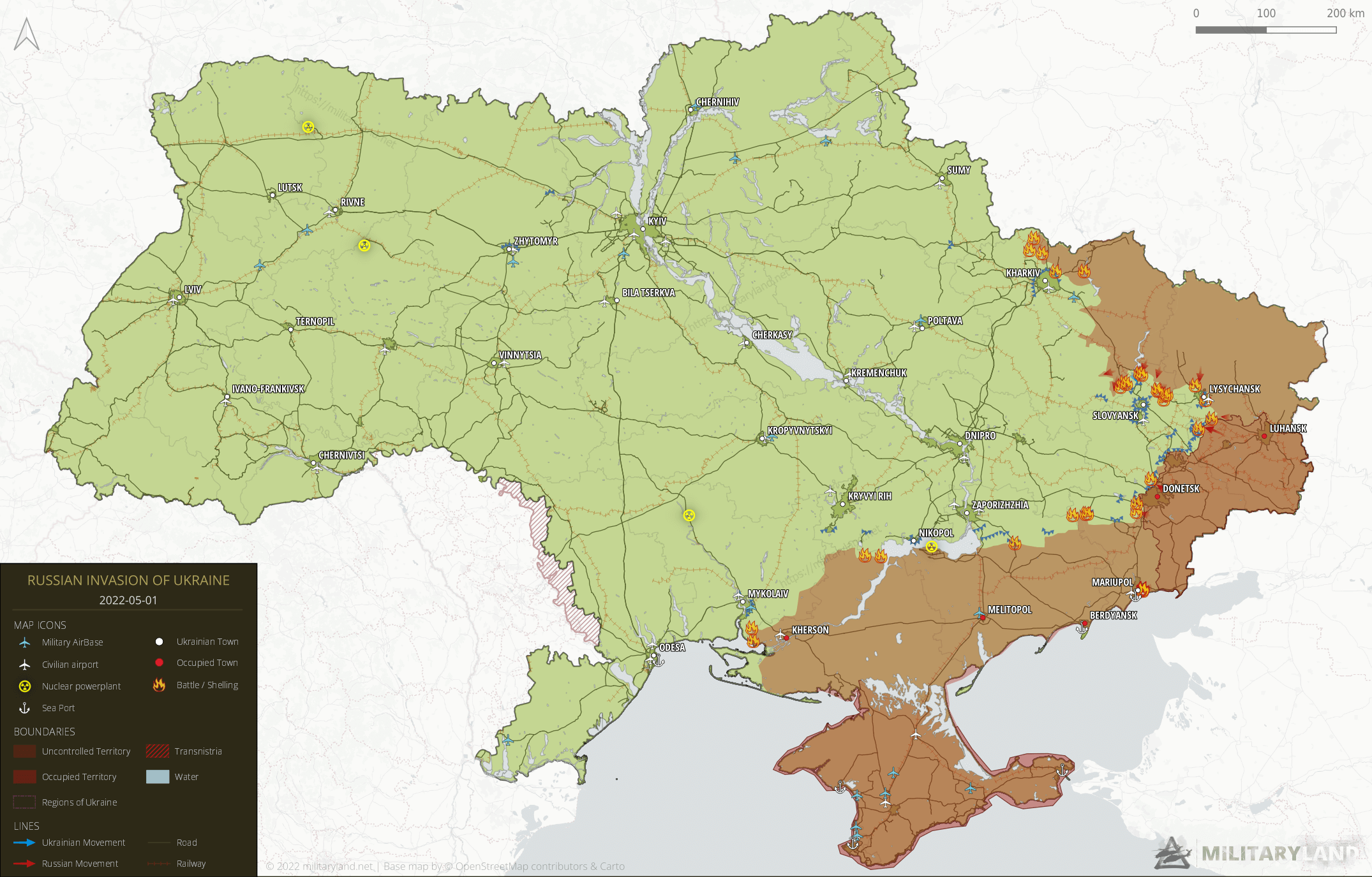 Today we got confirmation that Head of General Staff Gerasimov was in Izium during the shelling of the Russian HQ.
On tweeter some people claim he was “lightly wounded”, some say that was denied¹.
_____
¹ https://twitter.com/mschwirtz/status/1520877724361011200 (The New York Times, Michael Schwirtz)

what is false ? the fact he was wounded or the fact that was denied ? please share source, because I am myself confused…

How can that possibly be down-voted, unless it is by orcs. It is perfectly clear he is lying.