Ukrainian troops liberated more settlements in the vicinity of Kharkiv. Russian forces advanced in the direction of Lyman and Yampil and are slowly gaining more ground in the area. The other frontlines remained without change.

Russian forces hit an airport in Odesa and damaged the runway in the afternoon. 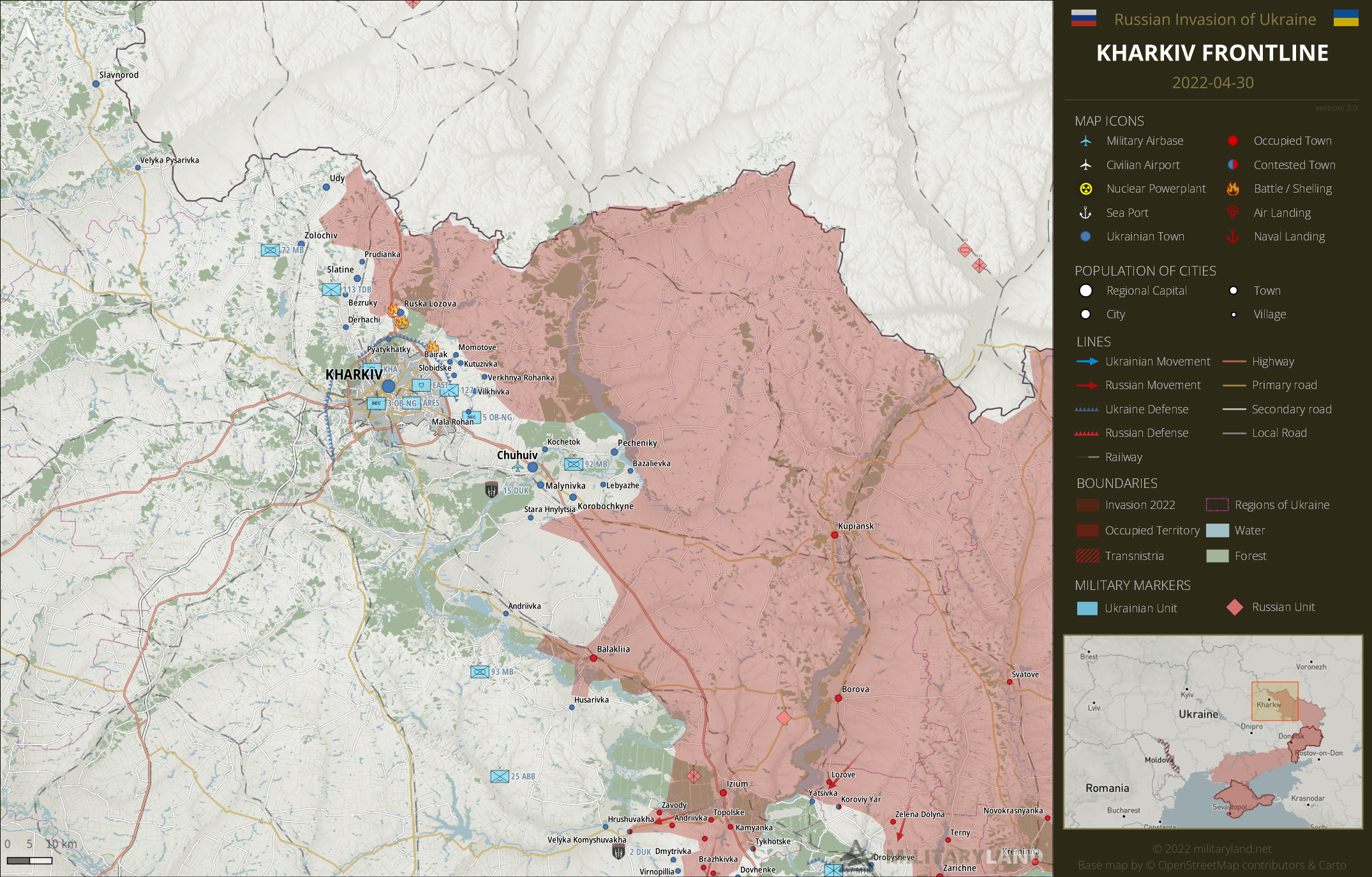 Ukrainian forces continue to push the enemy forces away from Kharkiv. They’ve liberated Verkhnya Rohanka, Slobidske and nearby Prelesne. Due to successful offensive operations of Ukrainian forces in the area of Kharkiv, Russian artillery almost ceased the shelling of the regional capital. 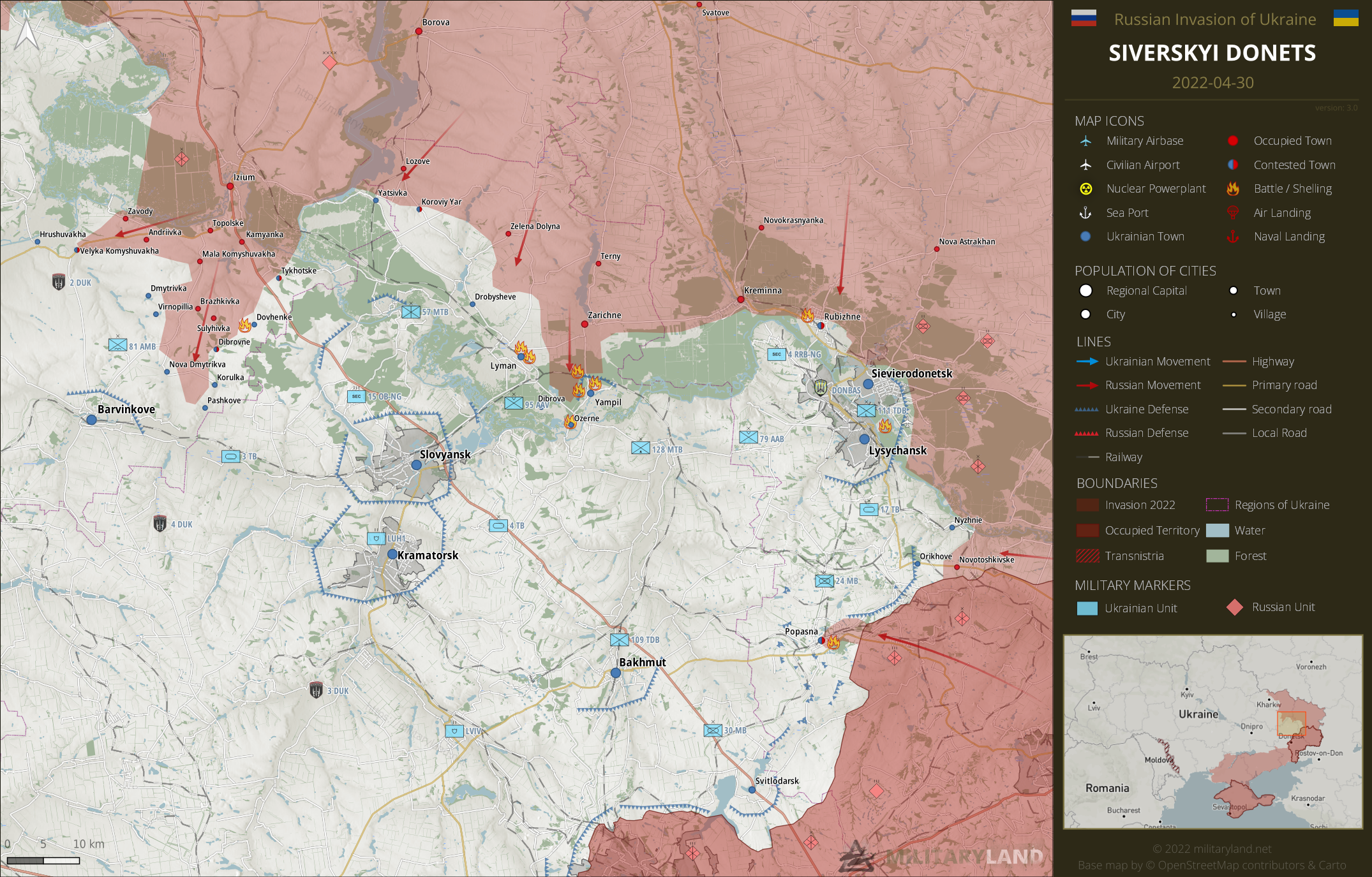 Russian forces attacked Dovhenke, but the attack was repelled. Ukrainian police has continued to evacuate civilian population from Drobysheve, Lyman and Yampil. The fighting continues in Rubizne and Popasna. Situation at Yatsivka remains covered by fog of war. 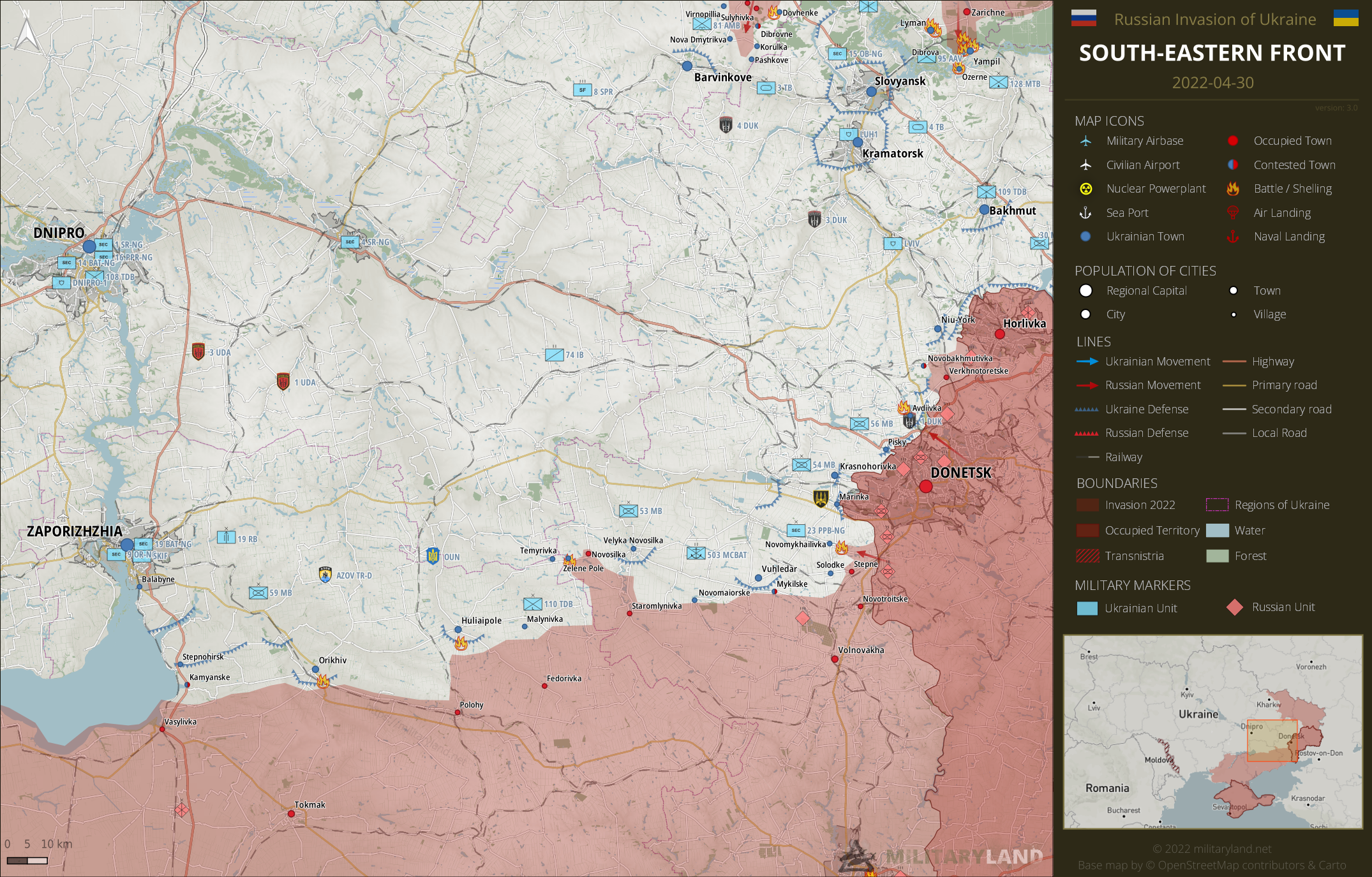 Russian forces attempted to break through Ukrainian lines near Novomykhailivka again. The attack was repulsed. 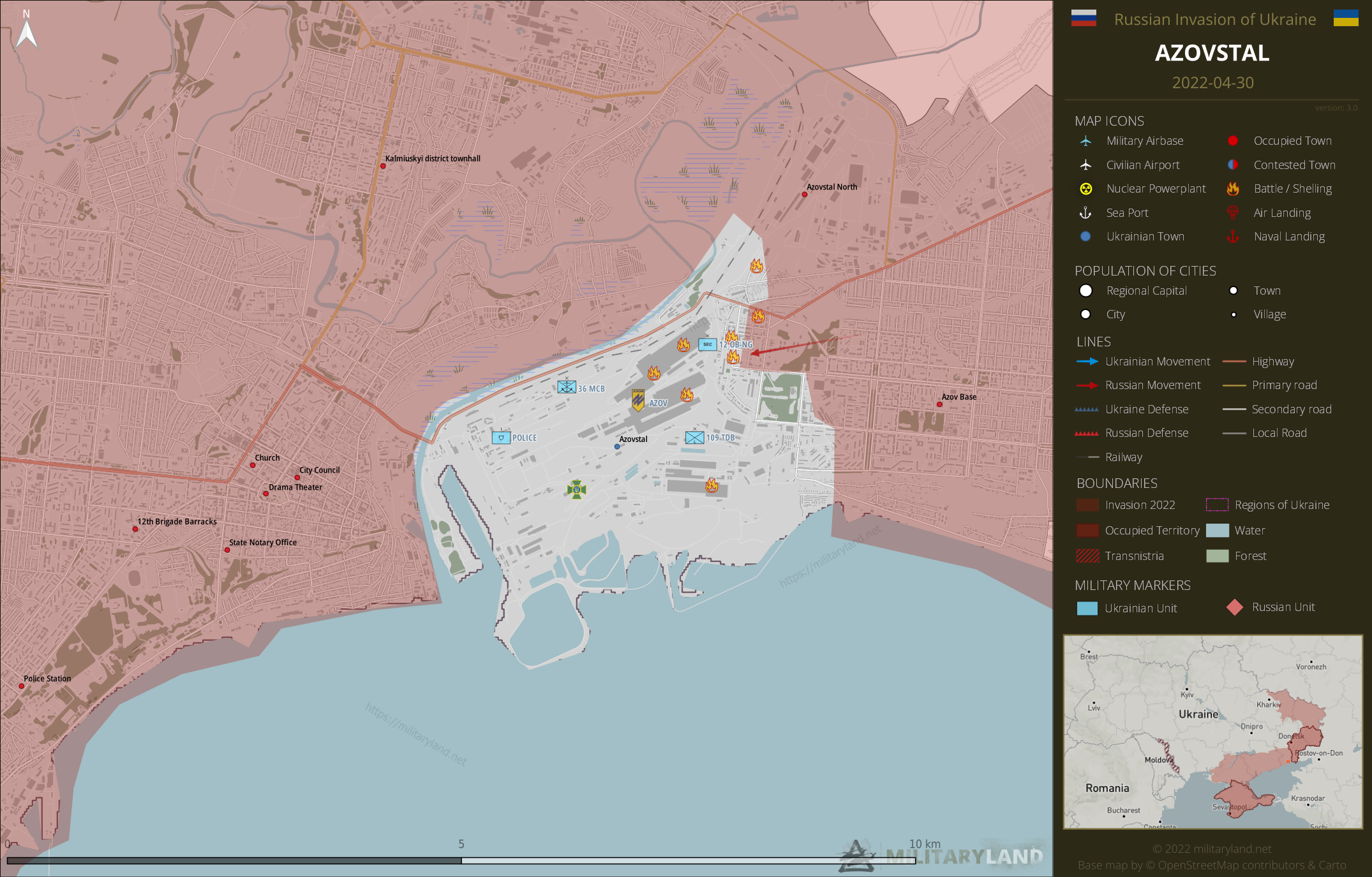 The evacuation of civilians from Azovstal has begun today. First 20 women and children have left the plant towards Ukrainian-controlled territory. 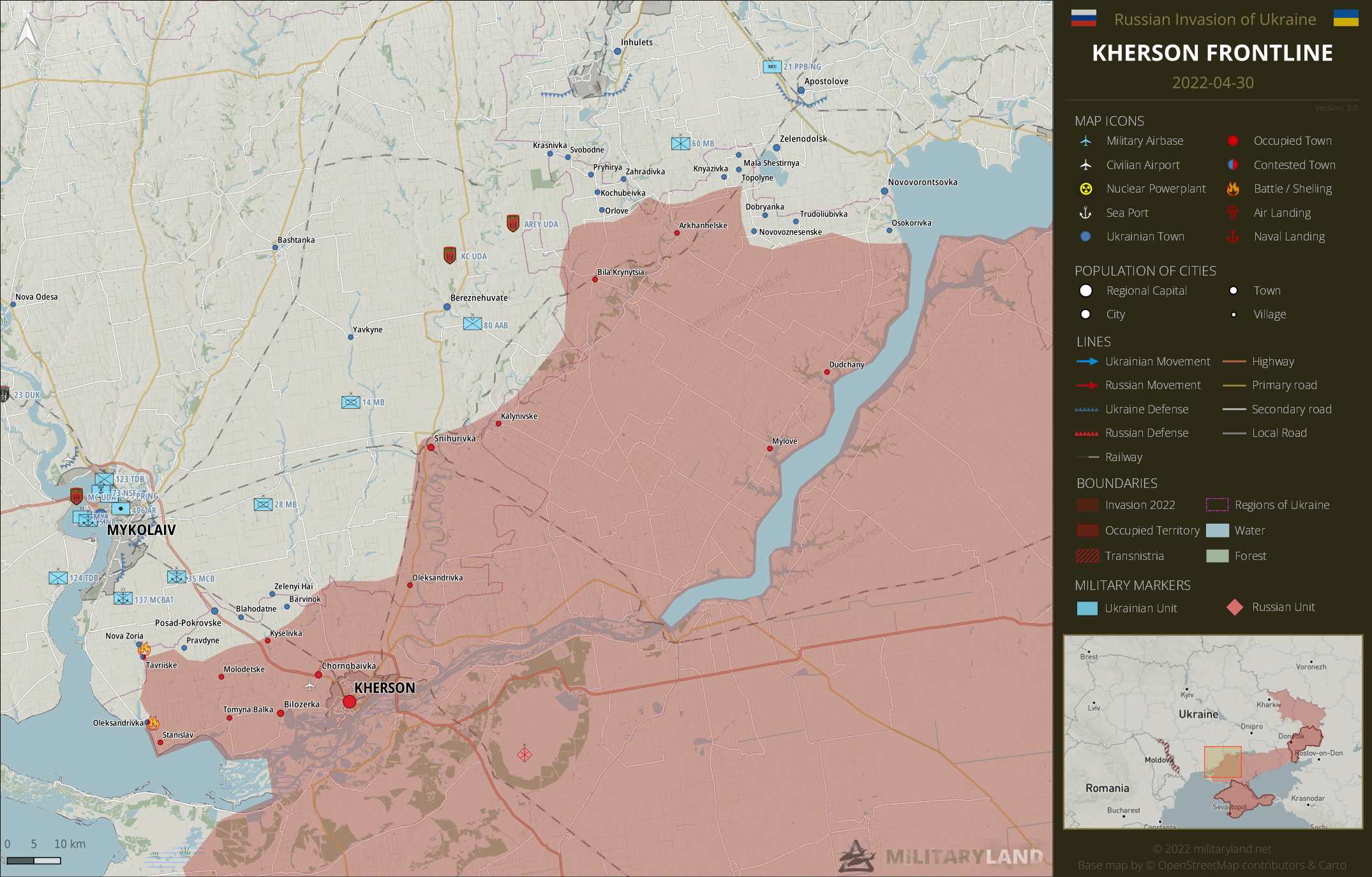 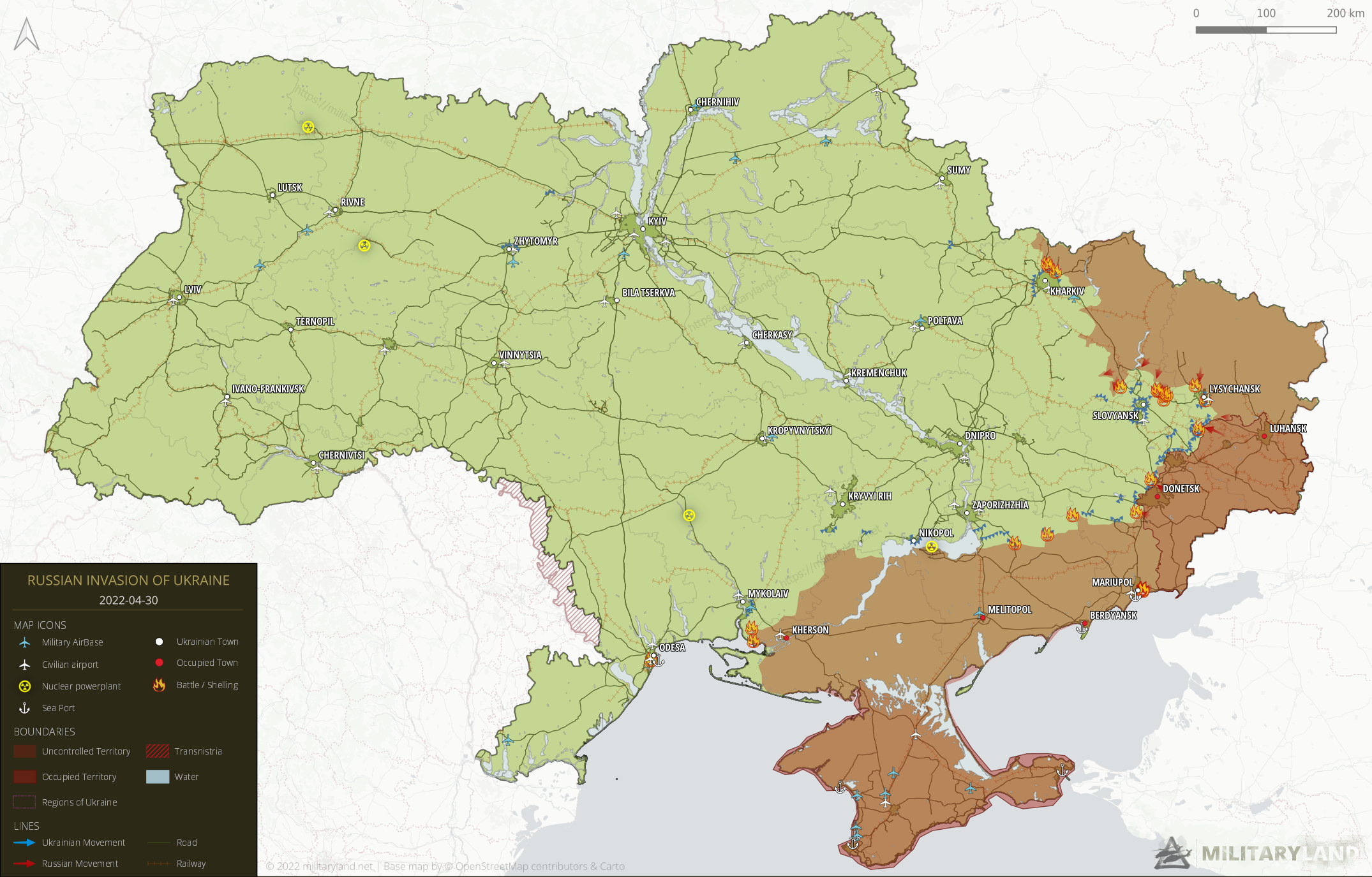 Hearing Lots of Russian casualties in Staryi Saltiv… that’s right next to the river, further from Kharkiv into Russian territory. Unclear if they got hit there or are withdrawing from front lines: inhttps://liveuamap.com/en/2022/1-may-russian-troops-have-significant-casualties-near-staryi

Whichever side currently controls Staryi Saltiv (the Ukrainian statement is so unclear that it may even mean Ukrainians are controlling the town, and repelled a Russian attack): The town is quite outside the area that was believed to be under Ukrainian control, so we are definitely seeing some kind of counteroffensive there, probably moving northwards along the Sieversky Donezk resevoir from Pecheniky. Since Staryi Saltiv controls a major bridge across that reservoir, an Ukrainian success… Read more »

Blocking the route from Belgorod is insignificant. Main Russian supply route is now from Valuyki. But it helps in the long run…

It looks like within the following month Ukrainian army is going to get a couple of new tank brigades and a couple of new artillery brigades along with getting good armored vehicles for infantry units. Antimissile defense is getting better from day to day. Ukrainian intelligence on the battlefield is working just fine.
Thanks to the West.

Russian reinforcements are ineffective and discouraged.

All Ukrainians pray for Mariupol and its defenders.

Going further into May we should be seeing effects from armored vehicles like Bushmasters that have been going in for some time, and of course more Switchblade action… artillery training probably completes by June so that’s when you should see more of an impact from them.

I read the other day that in Mariupol schools are opening. Kids are going to school, not hiding in cellars.
In my book, this is good news no matter where you stand in this conflict.

Russia has largely stalled, and it is the beginning of the end for them. UKr Troops freed up from Karkhiv could push on Kupiansk and cut off Izium. Allowing some Russ advances to the South of Izium with intent to slice their supplies ( yet again). This could end with large numbers of Russian PoW. Nothing happening in South as Russ can only afford to attack on one front. Oryx now up to 3314 Russ… Read more »

it seems that nothing special will occur before 9 May, expcet maybe mariopol corridor to exit remaining people, and a last assault on the remaining Ukr troops, and perhaps, full push of RU around Kharkiv.
Its difficult to understand Putin further strategy:
Full war mobilization, as it is months-long scale war, new front (moldavia, belarus…), peace negociation,..

It’s not as black and white as nuclear weapons or full mobilization. Russia can also turn up the heat gradually, to match NATO’s input… to slowly cook Ukraine alive, so to speak. They’re in fairly comfortable positions in the south and east right now. No need to hurry. They could do a partial mobilization, to increase the troops in the special operation with some excuse.

Look, to all which are boasting about Kharkov, they captured a few settlements, not pushed the Russians back. Also, Russians are focusing on encircling the 100k Ukrainian troops in the Donbass, once they succeed, Kharkov wont be a challenge to take 😉 They are encircling them quite successfully so far as well, even if 50k escape or so, 50k POW’s is an achievement for sure which will change the tide of the war towards the… Read more »

And yet somehow, this was exactly the Russian tactic in the first days, which resulted in many casualties. You have already forgotten about that, right?

I just gotta love the Russian interpretation of this war. First days: we’re winning everywhere, Kyiv will soon fall, they have no chance. After 60 days, we’ve never intended to capture Kyiv.

At first they did intend to capture Kiev, I never denied that. The key part of that phrase is “intended”. They never actually tried to take it. No invasion goes to plan, no invasion at all. Russia never actually stormed Kiev, it came to its outskirts, but then decided to pull back, it was NOT PUSHED BACK. It pulled out very quickly and fully intact without a battle and moved its divisions to the east,… Read more »

so basicaly the attack on Kiev was just a way to deliver Tanks to Ukr forces, to help them fighting them in the Est. RuSSia are so cute… expcet for Boucha.

Ukraine switch to NATO artillery. Ukraine have now what helped Russia win second world war “lend lease”. USA believe that Ukraine can win this war. If they believe there is big chance Russia will loose. They will do everything what they can to support Ukraine. Just wait

> Also, Russians are focusing on encircling the 100k Ukrainian troops in the Donbass, once they succeed,

sure, any day now bud.

If russians loose Staryi Saltiv its game over for Izium front

You mean that everything is “running according to plan” , and Russia forces leaving Kharkiv is just another distraction, and superb strategy from the eternal Tsar of all RuSSia ?
Poutin strategy is too great; One day Ukr will be at Moscow, “according to the plan”.
So, stop laughing. Kharkiv is just at 20km of Russia, and since 66 days, Russia forces have not been able to take it.

Thats just a FAILURE, nothing else.

Yes, Ukraine has transferred some weapons and units to the east. There seems to be ways how to do it.

Thanks for update, seems the Russian advance is largely stalled now and not really plausible for some big sweeping surround of the whole East as was feared.

Easy to say from your computer room

Still seems to me that Russia has some momemtum south of Izium which could severly hinder supplies to the rest of the Eastern front. Hopefully the push from out of kharkiv by Ukraine will eventually halt Russias momentum further south. The silence in Kherson oblast is a bit worrying to me. Could be Russia is hopelessly stalled or just prepping for something I would not like to see.