Ukrainian forces liberated another settlement near Kharkiv and are slowly gaining ground in the area. The situation on other frontlines didn’t change significantly on Friday. 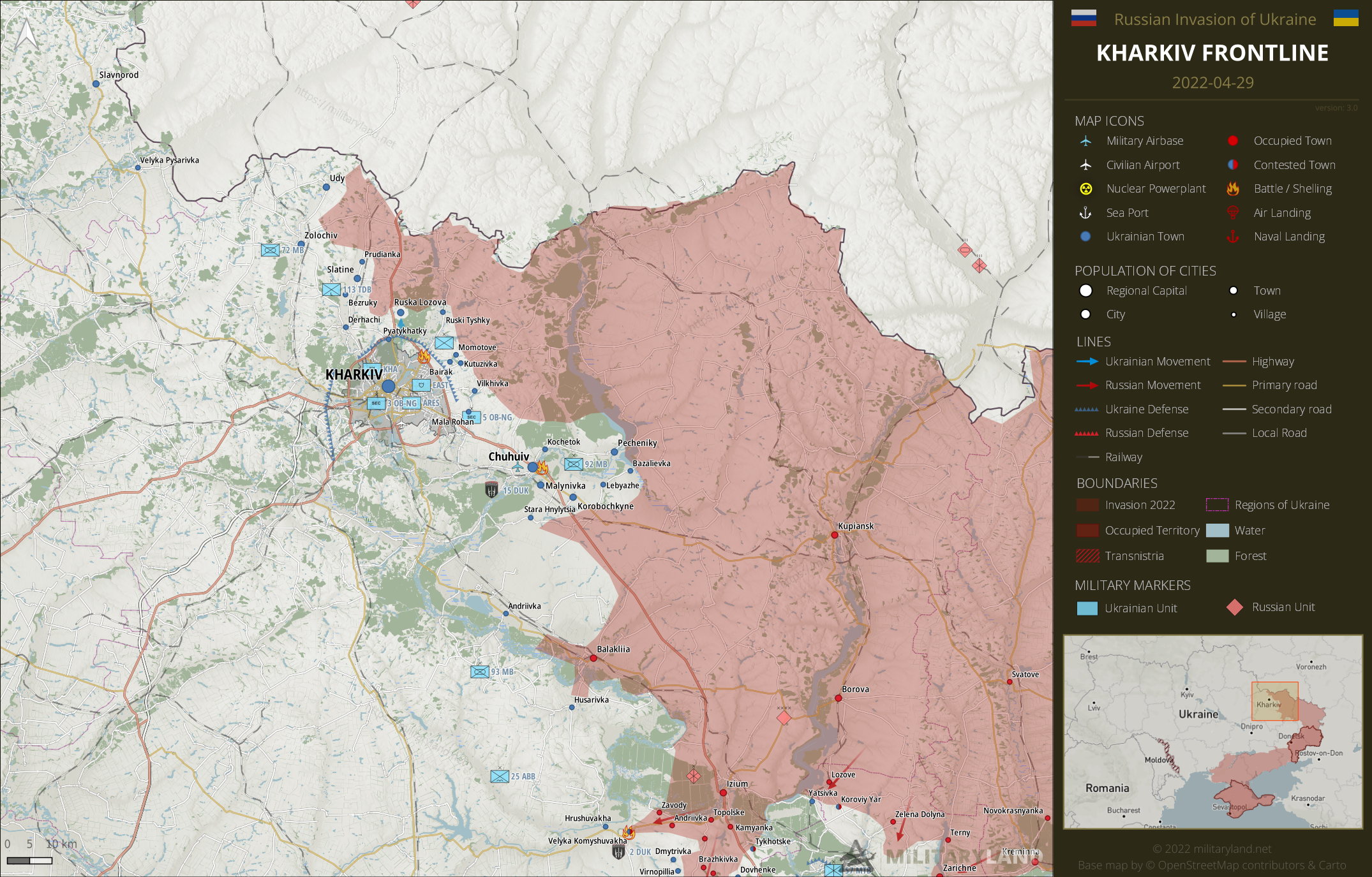 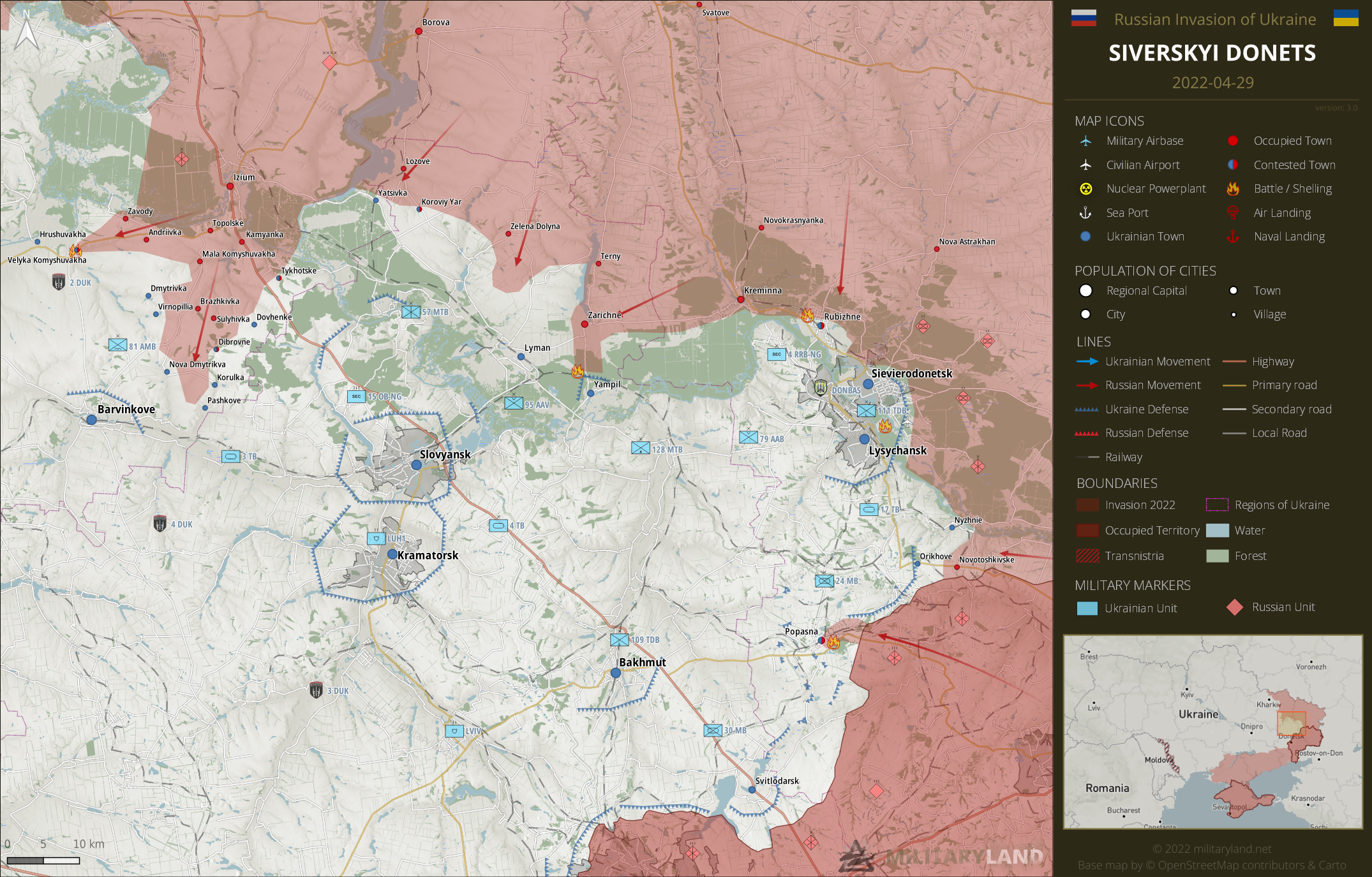 The fighting continues in the area of Velyka Kumyshuvakha, Yampil, Rubizhne and Popasna. Russian troops have reportedly set up an additional pontoon bridge across Siverskyi Donets river near Izium. 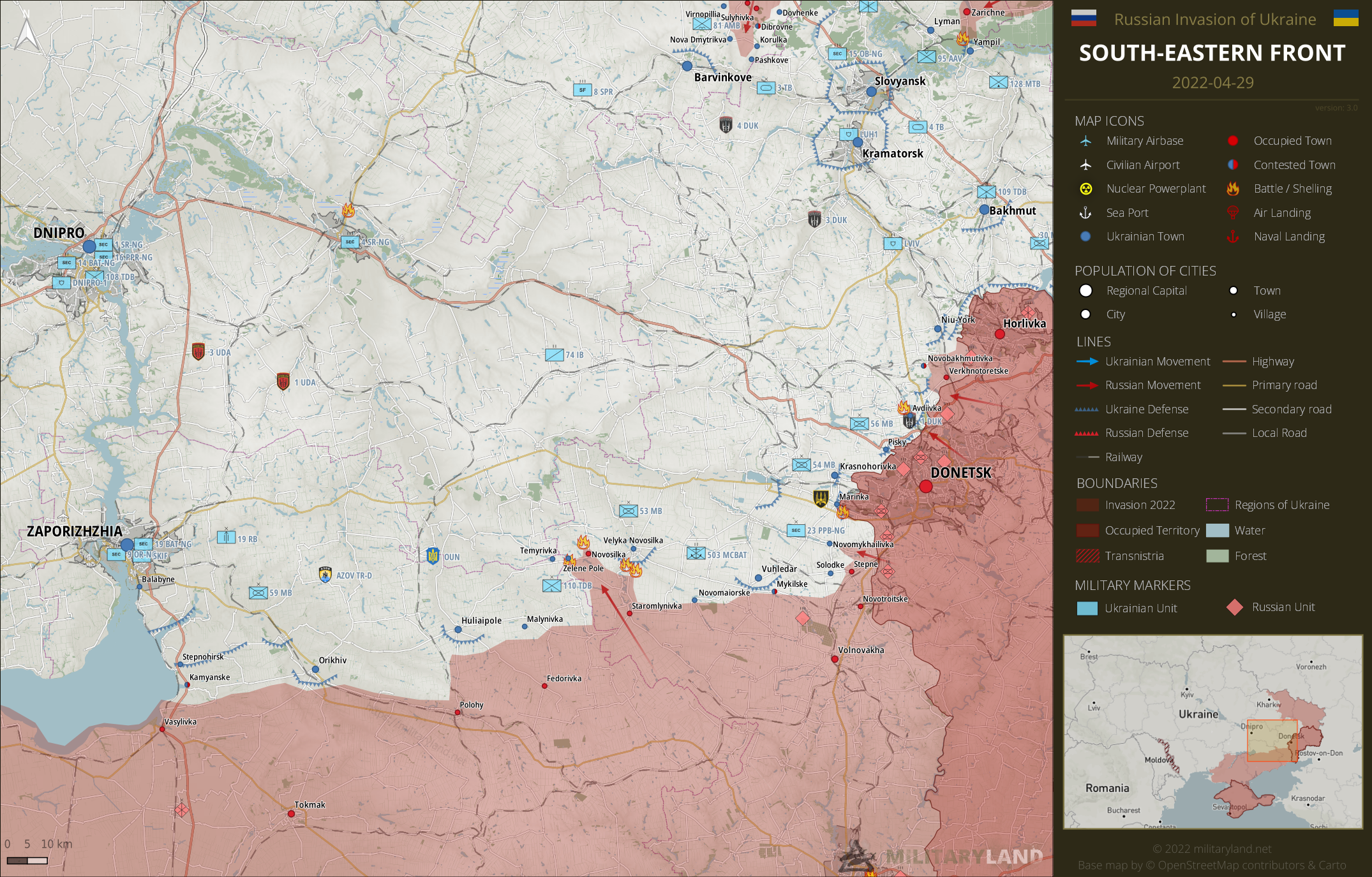 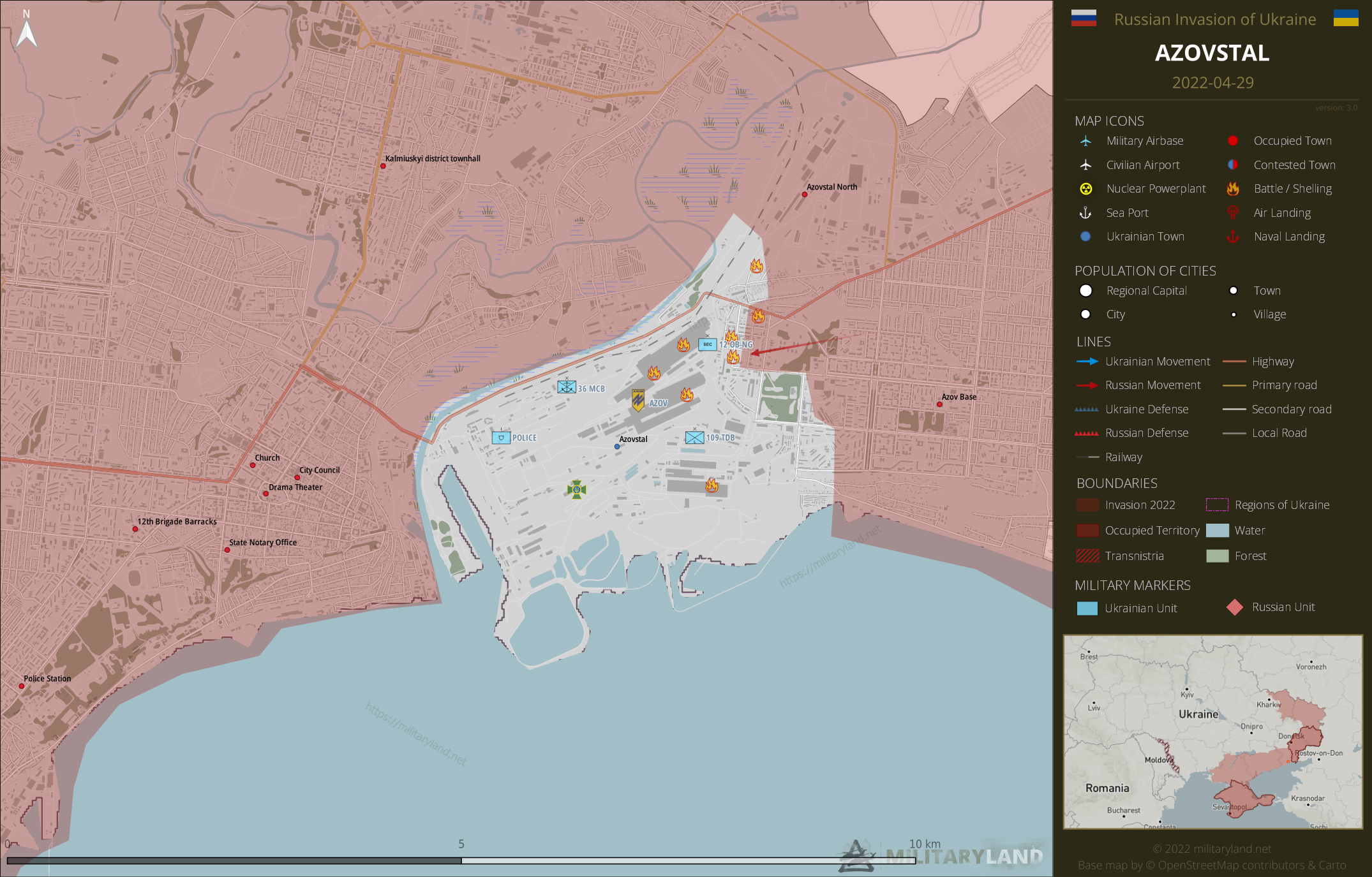 Russian forces are attacking the Azovstal main complex from the east. The fighting is ongoing outside the Azovstal’s perimeter. 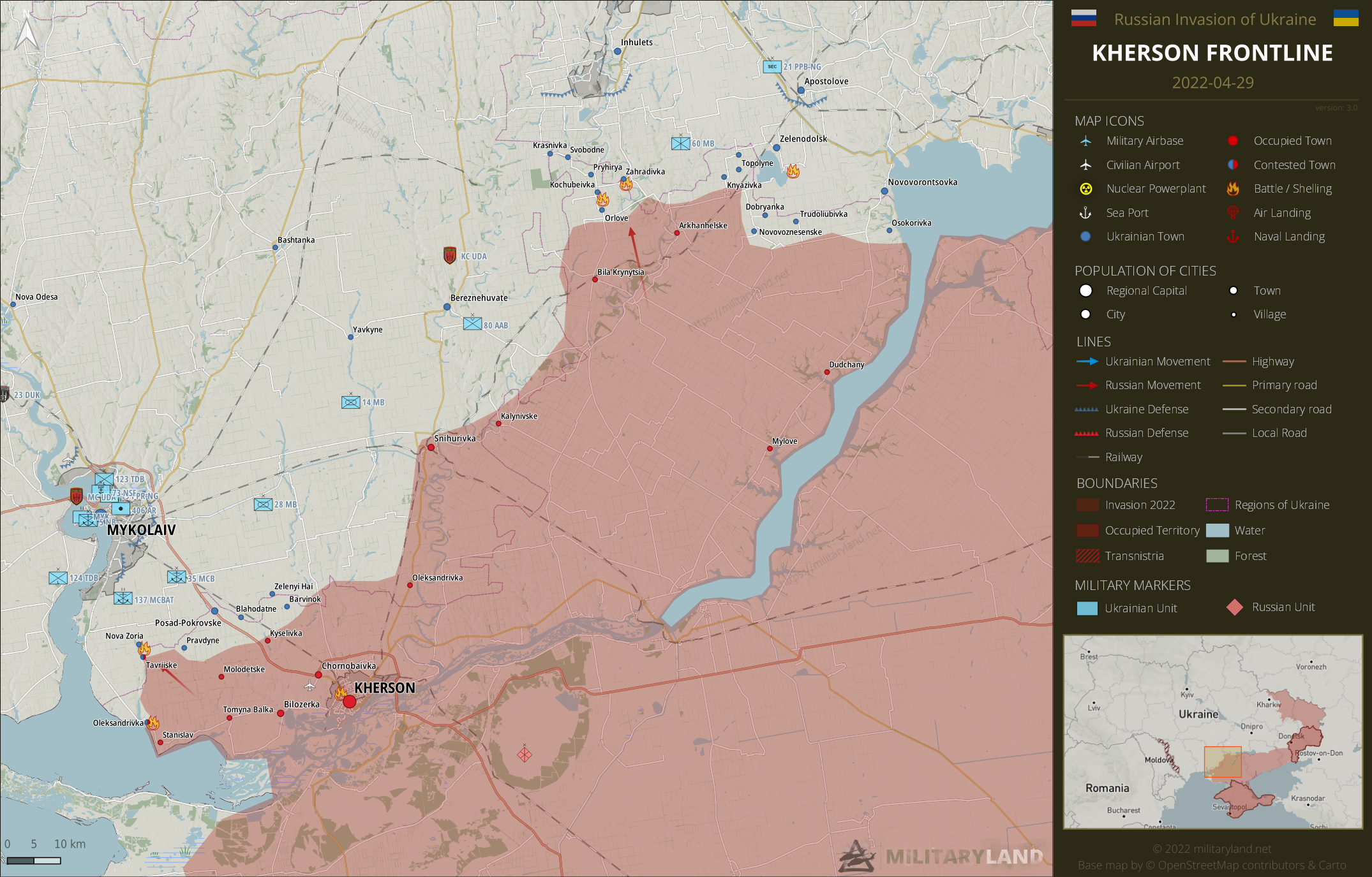 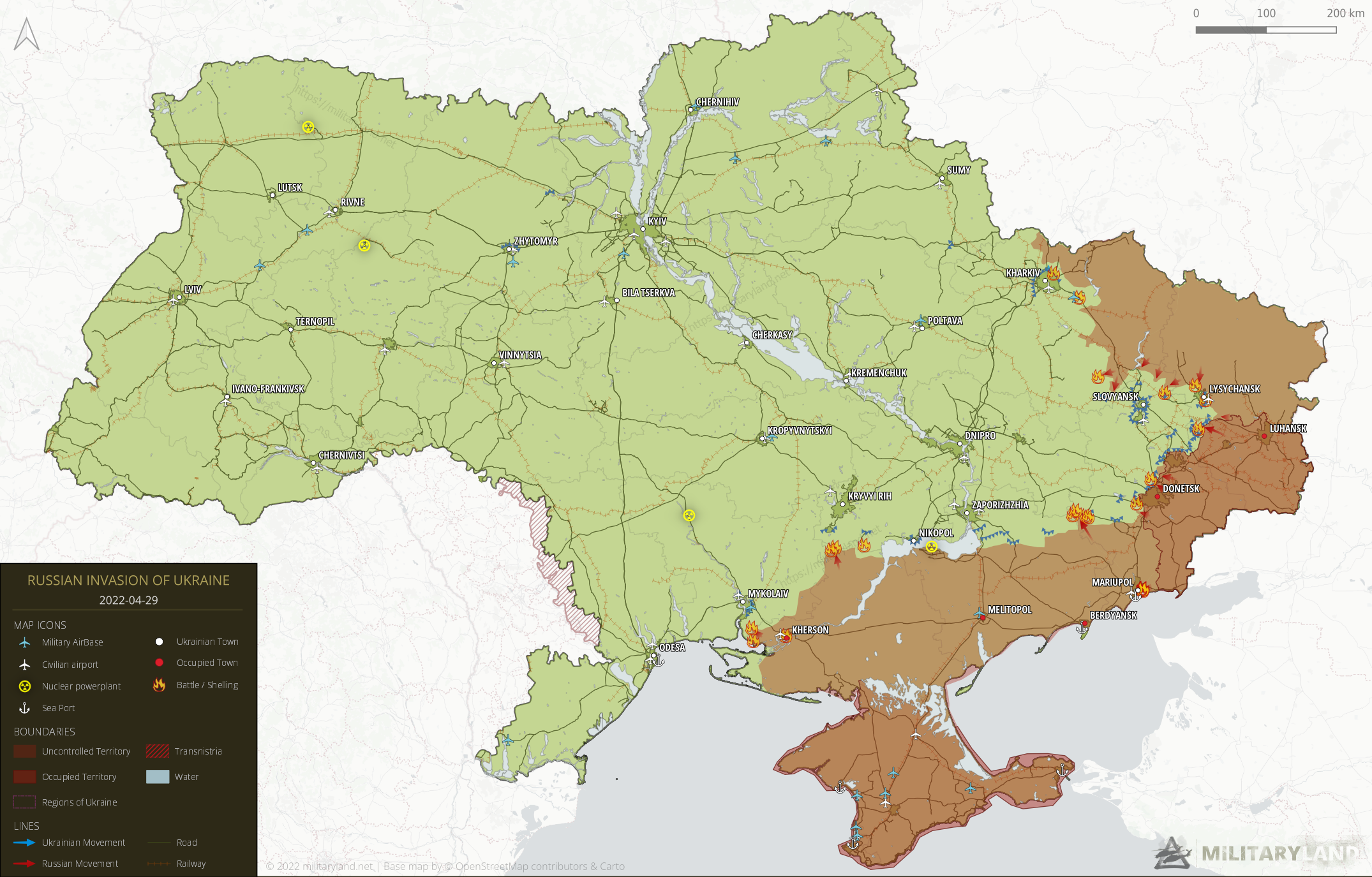 Some say Popasnaya is one of the key points in the East. If Russian Army and the Militias take it they’ll have an open road to Bakhmut (important logistical hub) and some Ukrainian units in Donbass will face a very real perspective of being encircled. The town is heavily fortified and as of now neither side has a firm control of it

https://twitter.com/i/status/1520112151012200451 https://twitter.com/doppelot/status/1520116988122648578/photo/1 interessting because Zabavne is quite near from Izium, so if Ukr are able to attack Izium from North, it will cancel RU benefits in West side. What we see if that Ukr are quite more dynamic, that RU which are based on artillery first, then tanks. Of course, they know perfeclty well their country, they have complete information support from US, so probably best that RU, and they are able to move around… Read more »

I would say that’s at least plausible. That E40 highway Zabavne is on is 5-10 km from Ukraine frontline depending on sources. Well within some artillery range. If they can shell that road which brings supplies to Izyum that’s a major power grab.

Hey people! As I said before, the push to Krivoy Rog fizzled out before it started. And now, it seems the plan to surround and take Kharkiv has been abandoned as well. It seems orks are loosing ambitions fast. The last three days I noticed orks stoped using choppers as well? The KA 52s seem more like KO 155s to me. 🙂 The video of a flying Ukraine chopper improved my mood today. Beat the… Read more »

Yeah, very little heloes getting destroyed lately. Most air hits are cruise missiles and drones. Either RF has become really careful in using them or they have no need for them at this point.
From Russian telegram: https://media.discordapp.net/attachments/960953700740911209/968151421805559818/unknown.png?
Even the Z’s don’t think they can get Kharkiv.

missed the link for source,

Ukraine specifically said it was russians who destroyed the bridge. Dont have the link but its officially stated.

Liman-Rajhorodok rail bridge blown up with said russian transprt on it, so it would seem that orcs do control Liman at least, how else would their train be there?

Hi. I just communicated with a Ukrainian war mapper (Twitter: @Ukraine_map ) — since he is Ukrainian, he actually picks up the phone and calls local residents to find out the situation. He’s confirmed that Ukrainian Army is still in both Yampil and Lyman…and there is still fighting for Oleksandrivka village to the northeast. The source used by ISW for Yampil was just a Telegram tweet. As for the destroyed rail bridge shown on video,… Read more »

According to the ISW (see their sources for further details), Jampil has been taken by the Russians on April 28. They now appear to advance further south, and westwards towards Lyman

Moreover, the source below implicitly suggests that Lyman may be under Russion control. Otherwise, it is difficult to understand how Russian railcars have made it onto the bridge from Lyman to Raygorodok (->Slovyansk), which was destroyed by the Ukrainian SSO with allegedly such cars on it. https://www.pravda.com.ua/news/2022/04/29/7343021/ My feeling is that the Ukrainian side will be forced to retreat onto the southern Bank of the Donezk river, which implies giving up Lyman (to the extent… Read more »

This news article says that Lyman has been evacuated on April 29th: https://www.ndtv.com/world-news/russia-ukraine-war-ukraine-civilians-tearful-goodbyes-in-ukraines-lyman-as-russian-forces-approach-2932116 From this I think that WUF blew up the railway bridges in advance of the Russians and that WUF put those heavy railcars on top of the bridge, to make it collapse further and faster. Note that there is also a roadbridge next to the railbridge that still seems to be intact. This says that WUF forces retreated southwards towards Oskil. Just… Read more »

Giving up Sievierodonetsk is irrelevant to holding Yampil. The Ukrainians seem to have prepared their main defensive line on the Donets river in the northern part of the front, but Rubizhne and Sievierodonetsk cannot be abandoned as it is the last stronghold in the Luhansk oblast. Besides, the city is untakable without heavy preparations and assaults, and Russia doesn’t have the troops in the vicinity to conduct such an attack. Most of their offensive power… Read more »

Hi. I just communicated with a Ukrainian war mapper (Twitter: @Ukraine_map ) — since he is Ukrainian, he actually picks up the phone and calls local residents to find out the situation. He’s confirmed that Ukrainian Army is still in both Yampil and Lyman…and there is still fighting for Oleksandrivka village to the northeast. The source used by ISW for Yampil was just a Telegram tweet. As for the destroyed rail bridge shown on video,… Read more »

However, the “open question” (unconfirmed situation) is at the town of Oskil, where Russian media says that RF forces have surrounded a battalion of UKR army. No one seems to know what’s going on there.

One thing for sure, however, is that this map is incorrect: Yats’kivka is definitely in RF hands. Likely Korovii Yar as well.

Losing Yatsivka or any of the areas north of Sloviansk is just a flesh wound… they’re not critical for Ukraine troop survival.