Ukrainian forces made small gains near Kharkiv and managed to stop the Russian advance in Siverskyi Donets area, at least for now. The Russian army targeted key infrastructure across Ukraine again and shelled two Ukrainian border posts in Chernihiv Oblast. 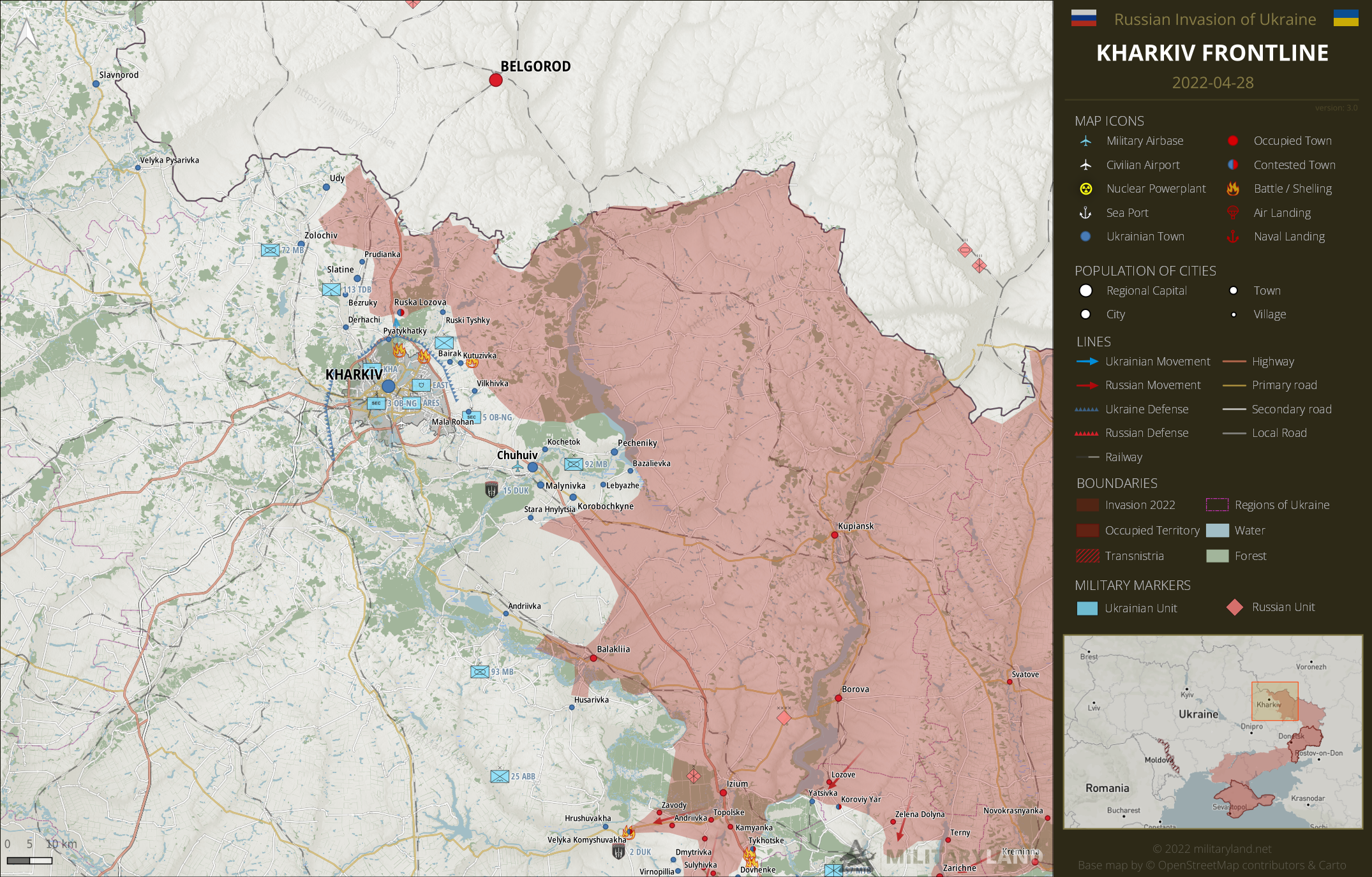 Ukrainian forces regained full control of Kutizivka near Kharkiv and advanced towards Ruska Lozova. They have reportedly entered the outskirts in the afternoon. 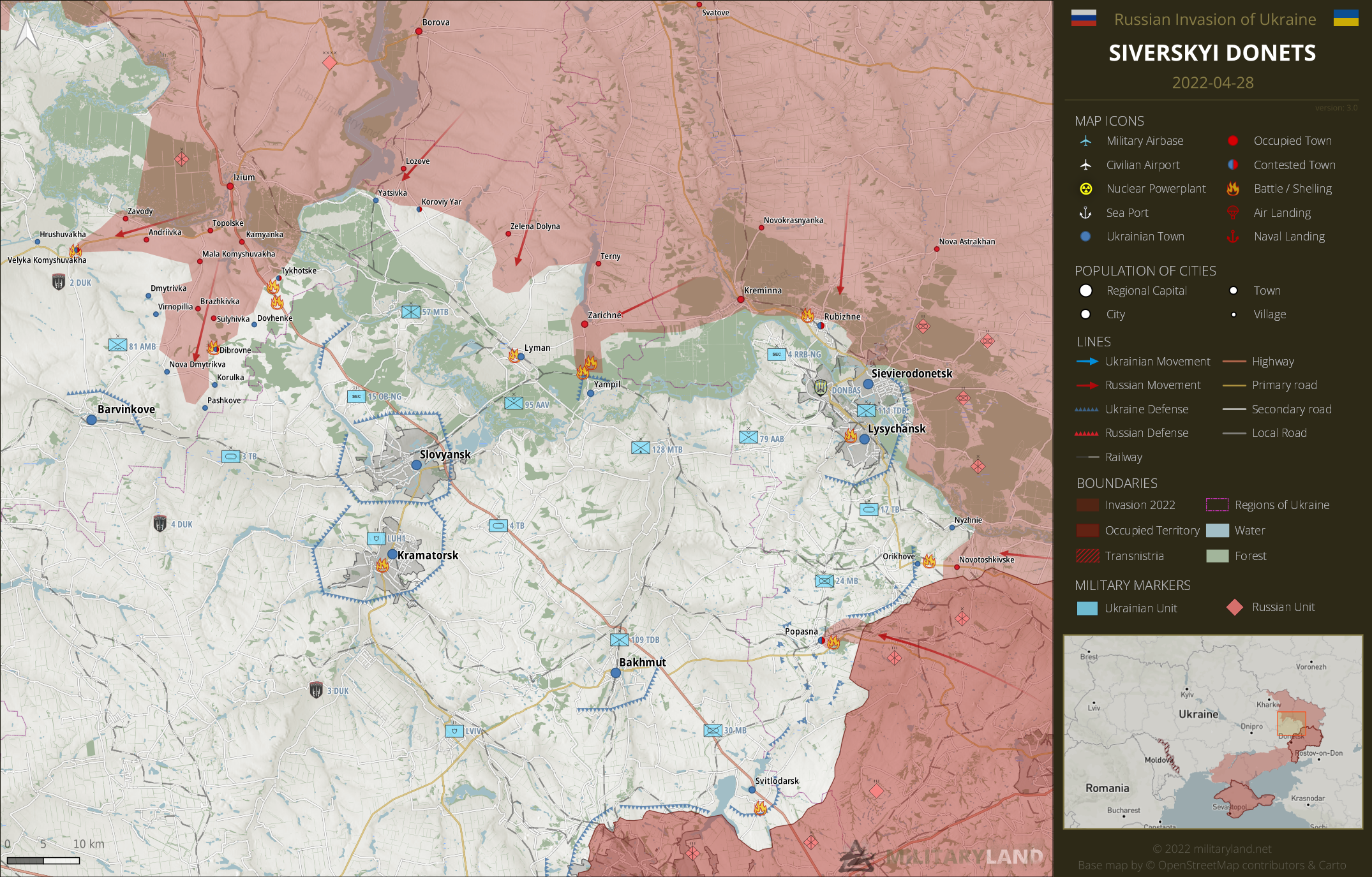 Russian forces assaulted Ukrainian positions at Velyka Komyshuvakha, Dibrovne and Yampil, without success. Situation in Rubizhne remains complicated, Ukrainian forces are concentrated in the southern part of the city. 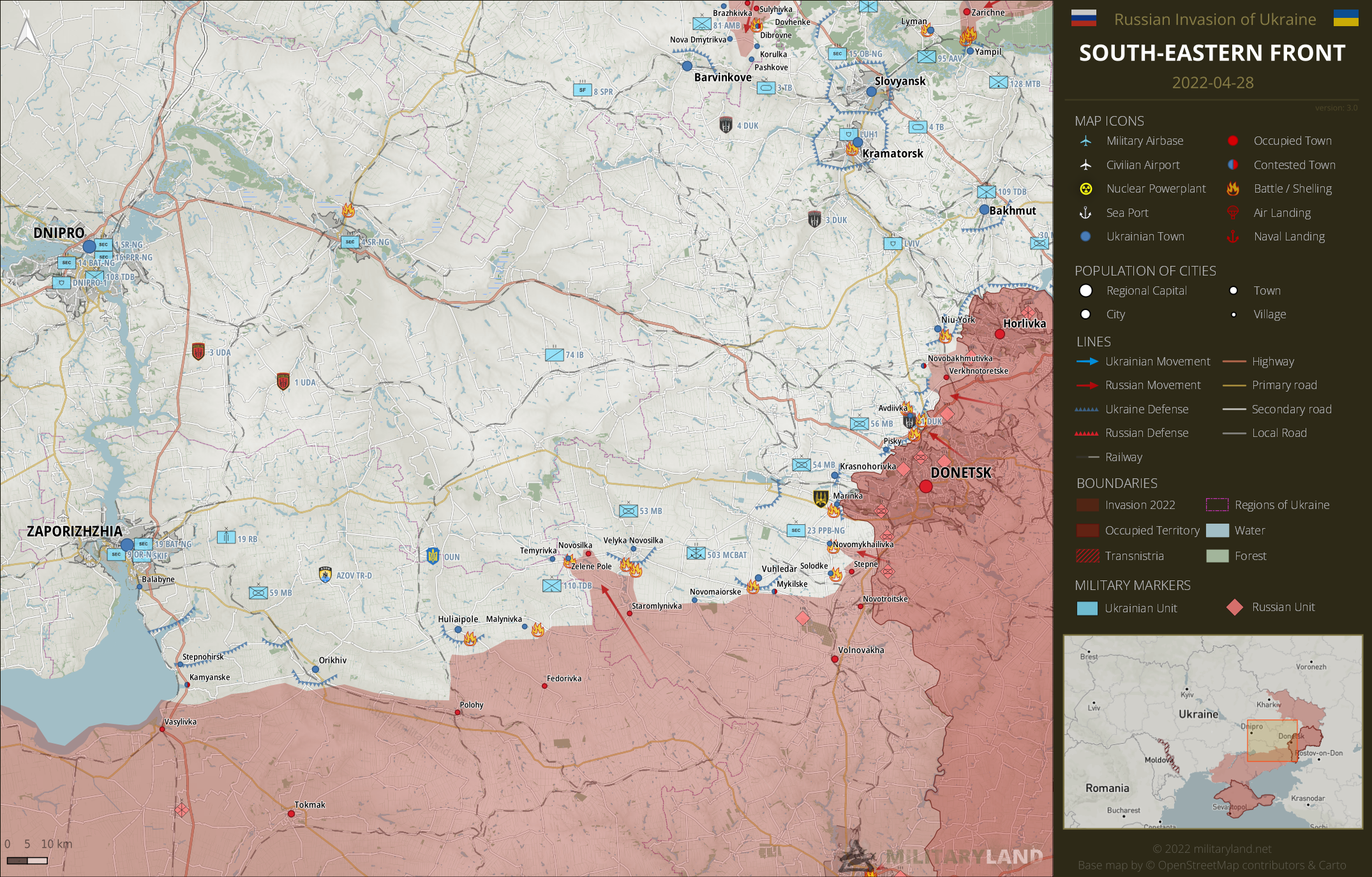 A fierce battle was reported from Marinka, but Ukrainian troops are holding the ground.

The day passed without a change on the ground. 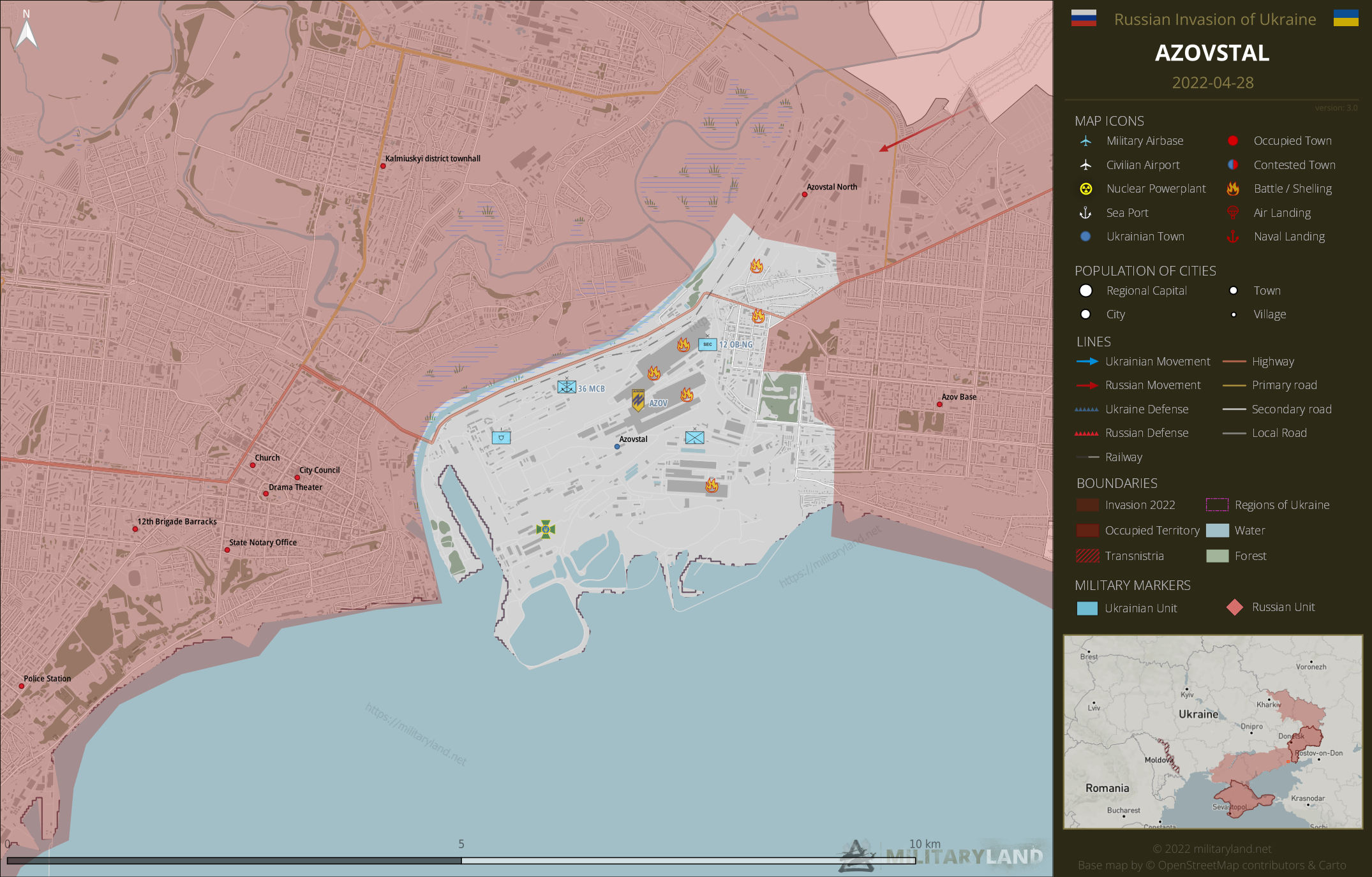 Russian troops de-facto captured the Azovstal North, they met close to none resistance in the area. It seems Ukrainian defenders have withdrawn towards the main complex. 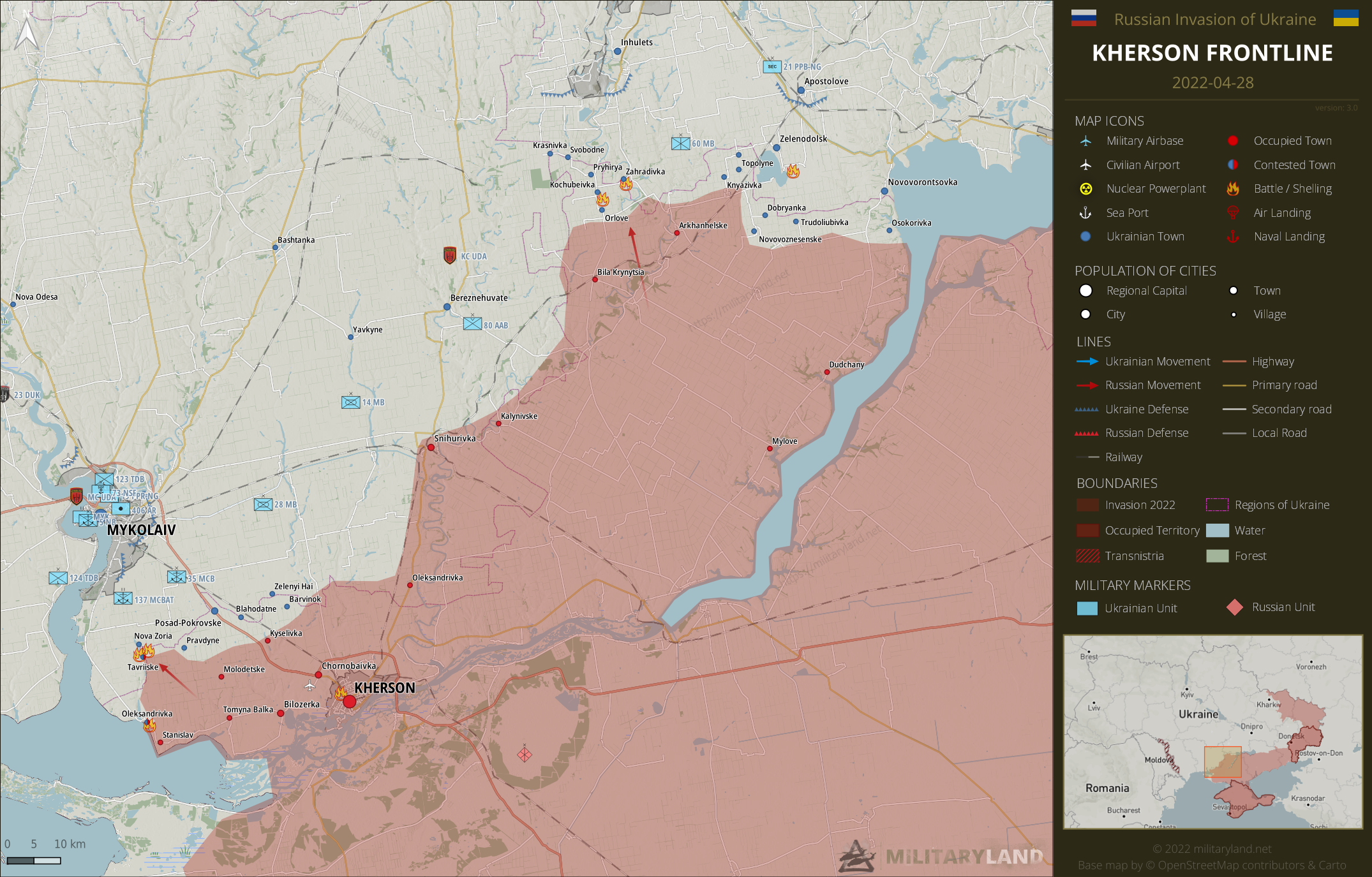 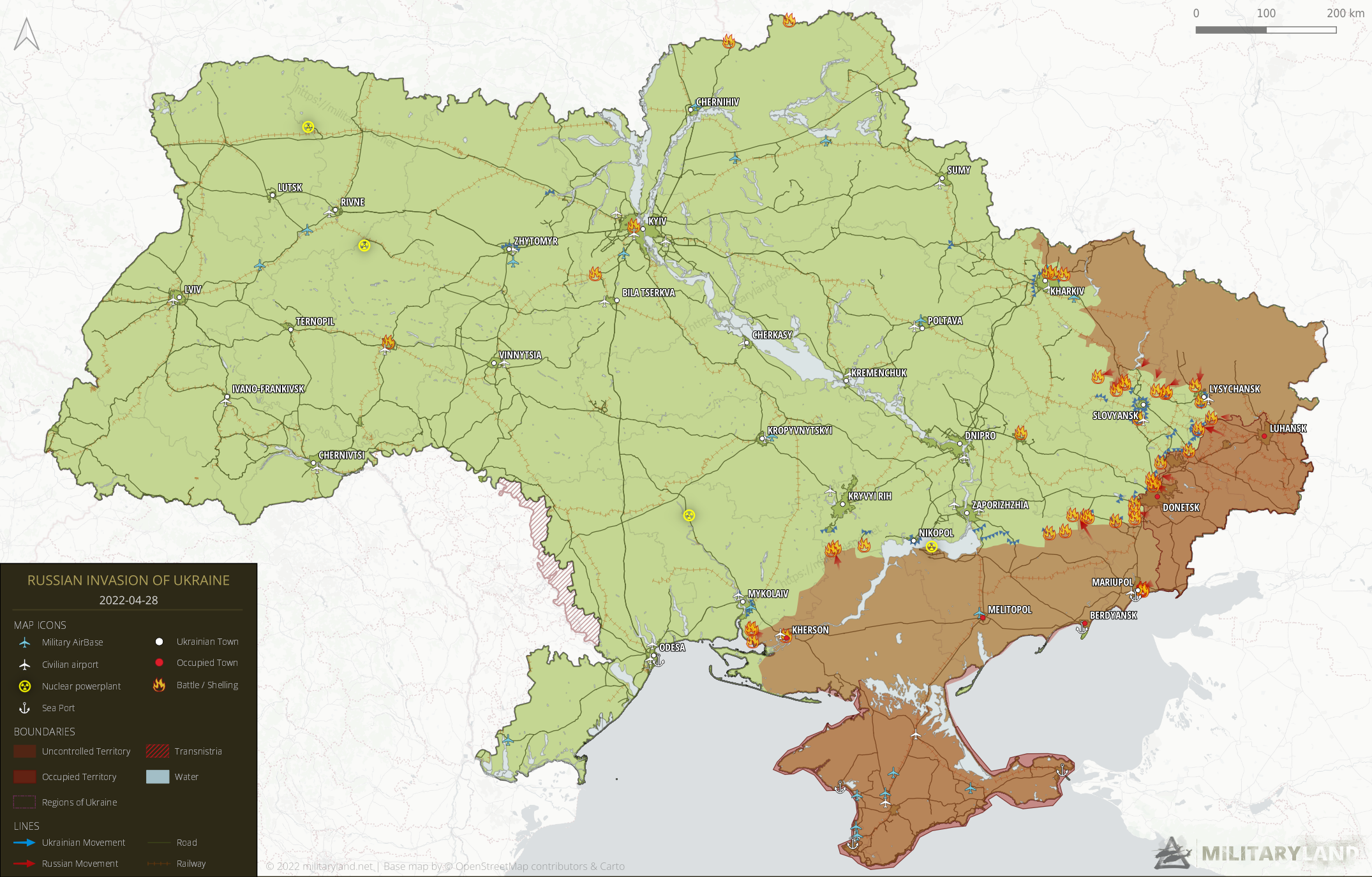 Hey i’ve got a problem with the zoom-window, it works perfectly on my desktop but on my laptop i need to hover way above what i want to zoom, not sure what causes the problem, both PCs are 1920×1080 resolution, one has windows 10 and one has windows 11, it’s a minor problem but it’s kinda annoying, anyways, keep up witht he good work my dude.

I still see error on your map, in the area northwest of Lyman. It’s been 2 days now with incorrect map. You are the only mapper not showing the RF advances there. Why?

Now hearing Ukraine has taken Ruska Lozova on that main E105 highway from Kharkiv… took them 17 hours from entering it to liberation.

Good, pushing RU away from Kharkiv will liberate UKr forces to go south to izium.
Anyway, as soon as RU are away enough not to be able to shell kharkiv, they will have to go back to Russia.
No more interest to stay in Uk there.

If ru dont counterattack, all the m20 will fall soon. Their position are impossible to défend in this area.

I take a more skeptical view of what gets reported on CNN, etc. I’m still of the opinion the push towards Kiev was one, a feint and two, to do some attrition on Ukraine’s forces. And day after day, I come here and read “Russia is shelling” or “continues to shell”, etc. It’s assumed here in the west (in the media, anyway) that Russia was going to blitz right through. But they have shown no… Read more »

I don’t see how Russia can win this war. They tried it with the blitz tactic and failed. Looking at the numbers, the tactics and the official Russian statements Kiew was and is the goal to take. There are some other goals, for example, to have a landbridge to Krim and a buffer to the main cities in the Donbas region. Except for the landbridge Russia did not achieve any of this yet. For a… Read more »

Only with 300 k conscription.

My understanding is that the Russians were trying to persuade or intimidate Zelensky to accept their terms, not to take Kiev. Because: – forces committed to Kiev were certainly not sufficient to take it (in military sense). Kiev is a huge city, you’d probably need just as many police officers to control it even without any war. In WW2 it took months and millions of troops – there were negotiations (not anymore) – Russians advanced… Read more »

One of the early convoys bombed on the way to Kiev was full of police riot gear and many of the early prisoners claimed to be police officers rather than soldiers. It was an occupation force for sure. They sent their very best into the closest airport to Kiev wit the plan to take and hold it. That was not a feint, it was a failure.

Not to mention the tactics they were using, lining tanks nicely for Bayraktars and sending helicopter transports full of soldiers to Hostomel despite all the Stingers Ukraine had, only for them to be shot down with 200+ casualties each. Is that the kind of shock and awe that was supposed to distract Kyiv from Mariupol, do tactics so stupi the command is simply laughing so hard they don’t see Russia creeping up in the south?

I also believe it was a feint. Russia committed only 150,000 troops and around 50,000 from the DNR and LNR fighters making it 2-3X less than the number of troops Ukraine has. If they were to capture Kiev, they would have needed to bring in way more troops to secure the main roads leading into the city. If you look at the war maps, the Russians never secured the roads to the south or east… Read more »

I do agree that they would need way more troops to take Kyiv, like 200,000 just to take that one city. In other words, they would have to focus their entire invading army there to take it and hold it, which would also cause more Ukrainian troops to defend it than before. Not feasible. Russia would have to fully mobilize to take and hold any major Ukrainian cities. Now they only have Kherson and Mariupol,… Read more »

Bad comparison. Ukraine earned at least 15 countries’ (with some of the most powerful countries in the world) in supporting with military materials or finance. South USA never enjoyed such overwhelming foreign aid during the civil war, not even a single gun, warship or little money was offered by his potential ally Britain or France. Oh, what if the British Empire actively offered military aid to the South in the American Civil War, even offered… Read more »

You don’t commit over 30k soldiers losing surprise element and take heavy casualties like they did. Russian forces just for a distraction. They were in a big hurry to from at least two sides get to Kiev and they actually got pretty far the first days but it stalled for a number of reasons. In hindsight no matter what they were trying to achieve it failed and those forces would really have been better utilized… Read more »

its because you forgot the history lessons…. Czechoslovakia saw the same in 1968… strike at Kyiv was same as strike at Prague back then… VDV captured the airport, more troops landed, they captured the parliament and the government… but in Kyiv, Ukrainians fought back… so their entire plan failed… and their army was not ready for any sort of resistance.. they were not even ready for 200km march on the road… That now they manage… Read more »

Not only were they not ready, some of them didn’t even know where they were! Some soldiers only realized they were in Ukraine seeing the roadsigns that said “Fuck off” and “This road to Hague”.

And to comparison. Czechoslovakia was invaded by half million of soldiers. So comparing to Ukraine. For invansion there could be at minimum million russian soldiers and maybe even much more because of CS had nice shape for invansion by Kremlin and entire CS army was guarded west borders instead of borders with Warsaw pact countries.

finland 1939. Russia arrogance, that enemy will fly at their sight

“The Russian army targeted key infrastructure across Ukraine” even explosions in Kyiv after UN chief meeting source: https://www.ctvnews.ca/world/ukraine-updates-explosions-in-kyiv-after-un-chief-meeting-1.5879692 “it seems Ukrainian defenders have withdrawn towards the main complex.” today on tweetet many posted about the field hospital at Azovstal in Mariupol bombed and shelled heavily during the last night. Video shows heavy destruction at what appeared to be an underground facility. source: https://twitter.com/xenasolo/status/1519648480691687425 from Nicholas Drummond, good thread about what can comes next: https://twitter.com/nicholadrummond/status/1519262083002601473, “It’s… Read more »

I’d take these estimates with a grain of salt. They also kept saying Russia is losing $20 billion each day to maintain this level of readyness, that Russia will run out of money from their $600 billion budget in a month, and yet here we are after TWO months…

On the short term The issue for Russia is not the financial cost of the war. The economic cost of the war (inlfation, GPB) is at start a politic cost for Putin, he has to explain to his population. Also, they have enough oil for their forces… In the short term The equipements are already there, military forces are not so well paid… The limitation is in the logistic task to repair or move existing… Read more »