Russian army is slowly advancing in Siverskyi Donets area of operations. The Russian forces have captured Zarichne, Zavody and advanced towards Yampil. Situation in the southern Ukraine remains unchanged.

Transnistria’s officials stated that shots were fired from Ukraine in direction of Kolbasna in the morning. No casualties reported. 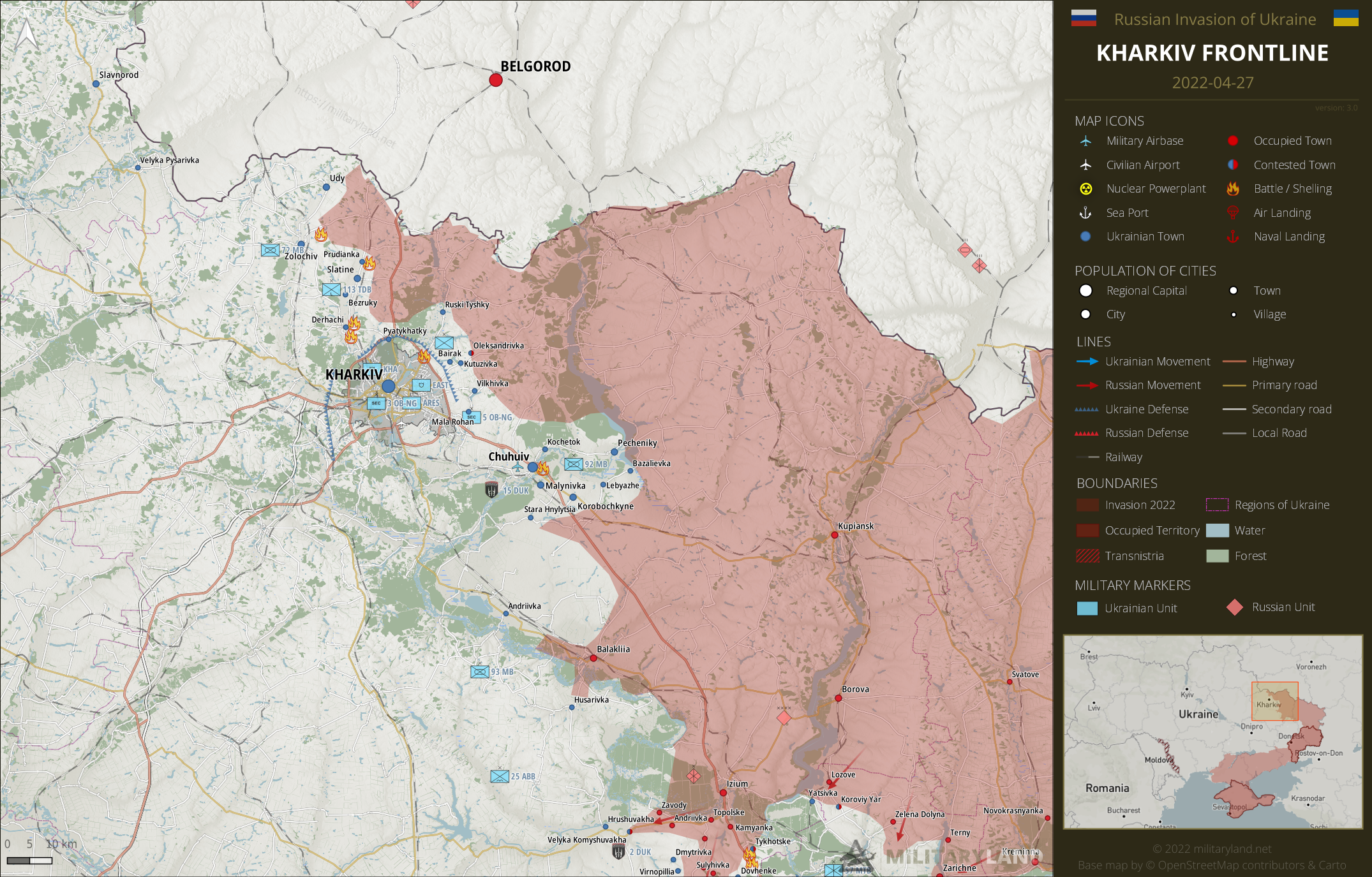 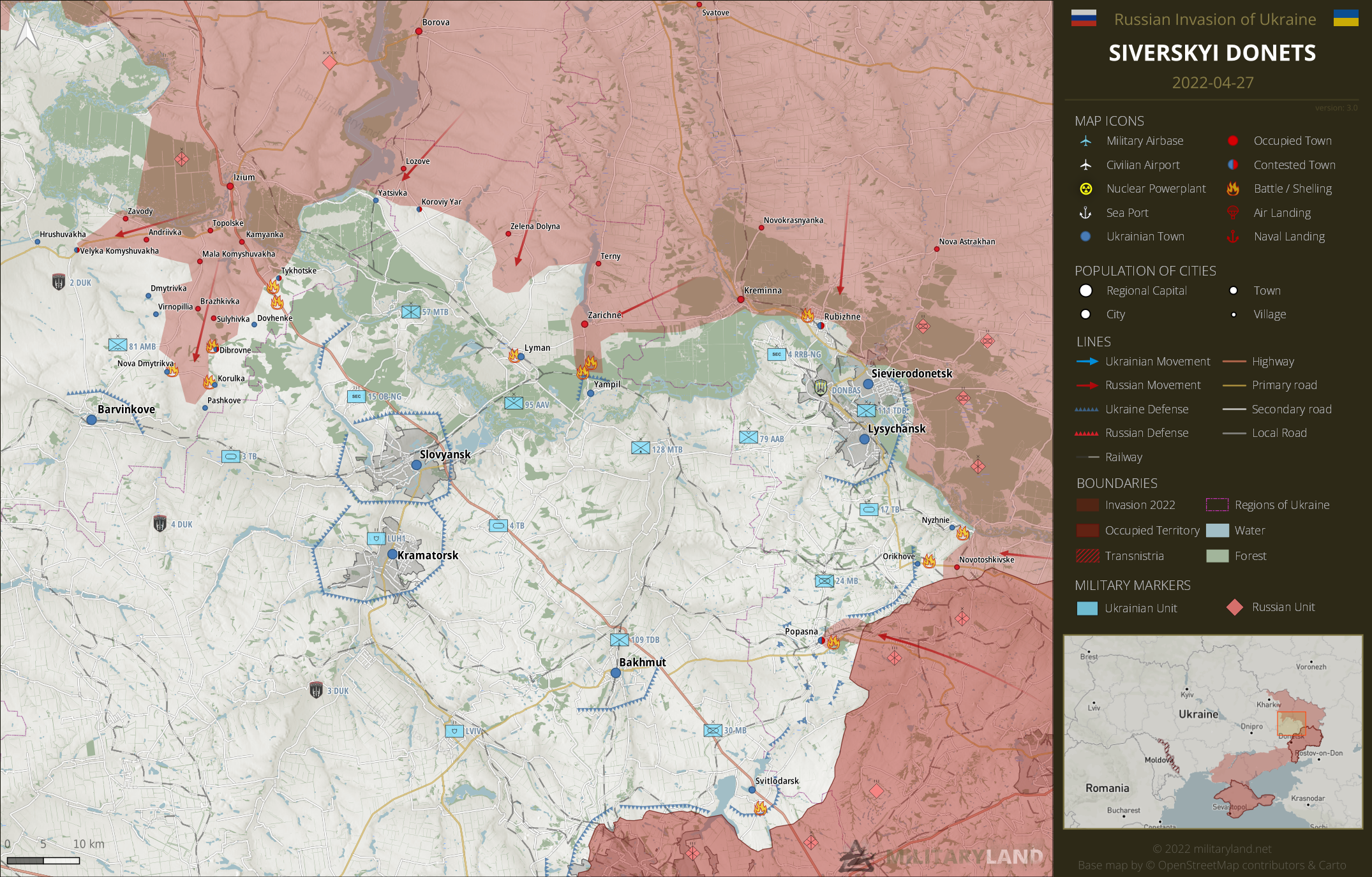 Russian forces have advanced west of Izium, captured Zavody and entered the outskirts of Velyka Komyshuvakha.  The enemy also attempted to capture Nova Dmytrivka, but failed.

In the vicinity of Lyman, the enemy has captured Zarichne and pushed south towards Yampil. The fierce battle in Rubyzhne continues.

Ukrainian defenders successfully repelled enemy attacks on Nyzhnie and Orikhove. The city of Popasna remains contested, but Russian troops are slowly advancing towards the city center. 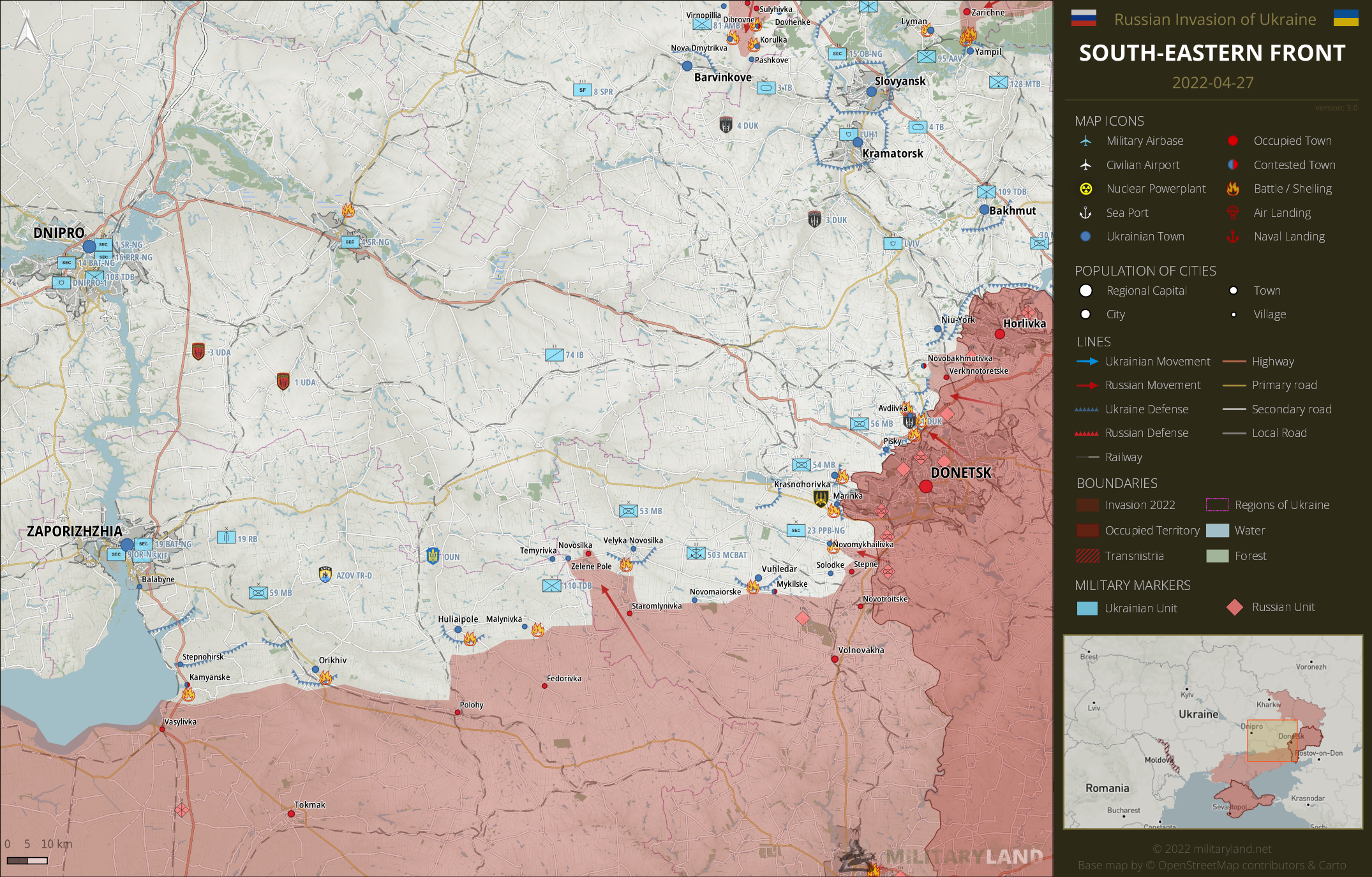 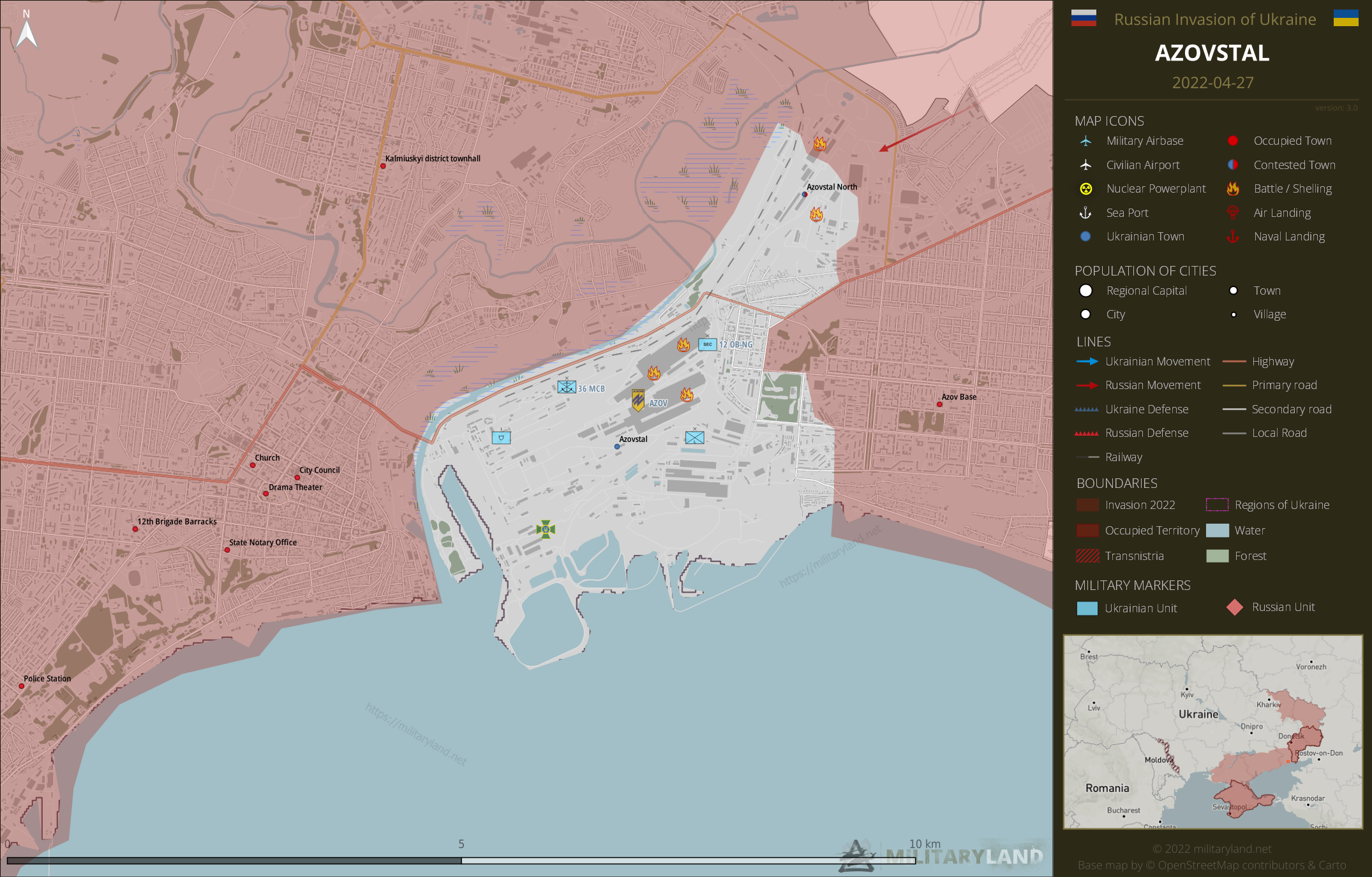 Situation in Mariupol remains unchanged. Russian forces are unable to breach Ukrainian defensive positions at the main complex of Azovstal. 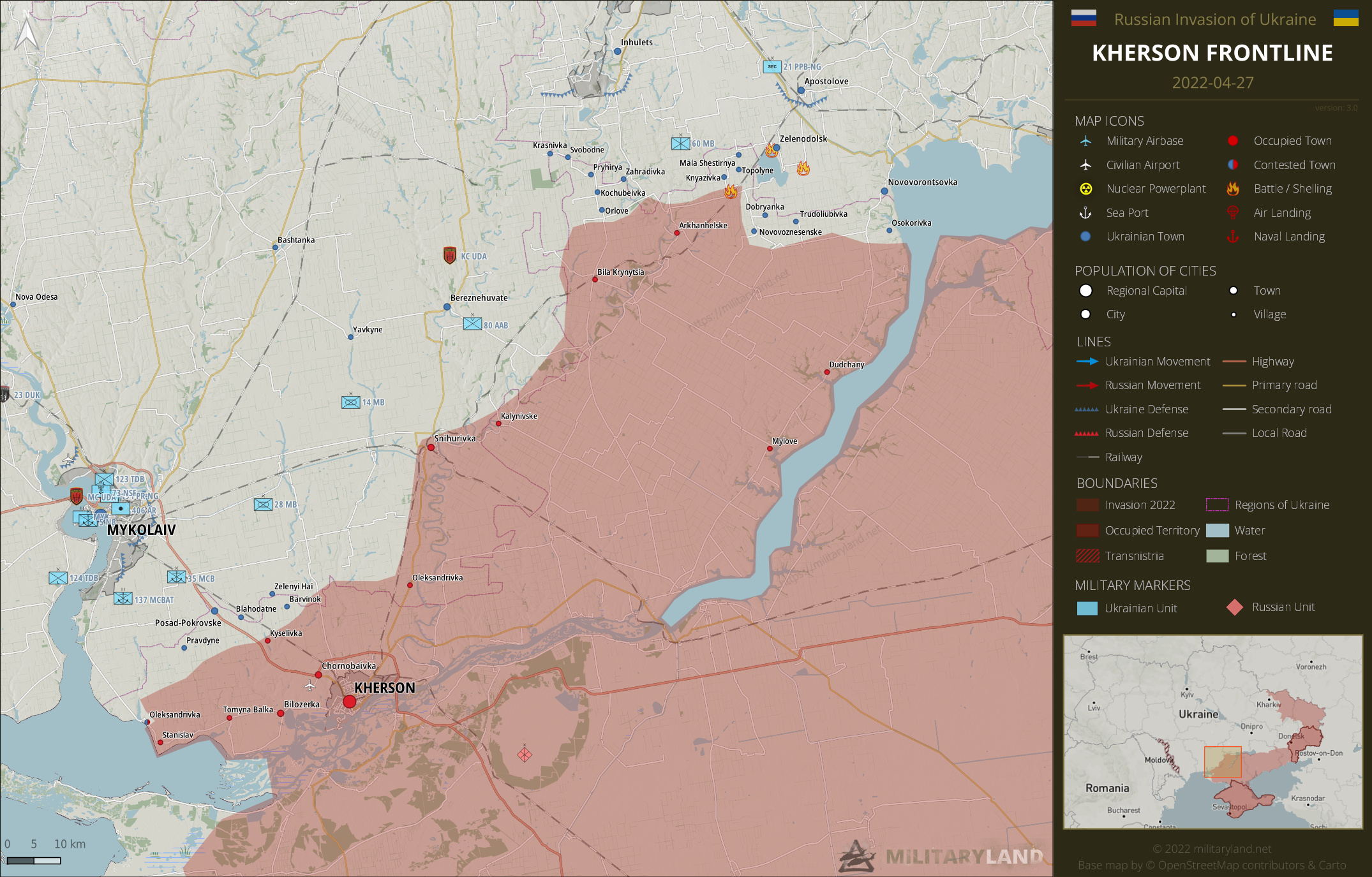 Shelling: Zelenodolsk and nearby area

Explosions were reported from Kherson late in the evening (not marked on the map). A missile reportedly hit a radio tower in the city. 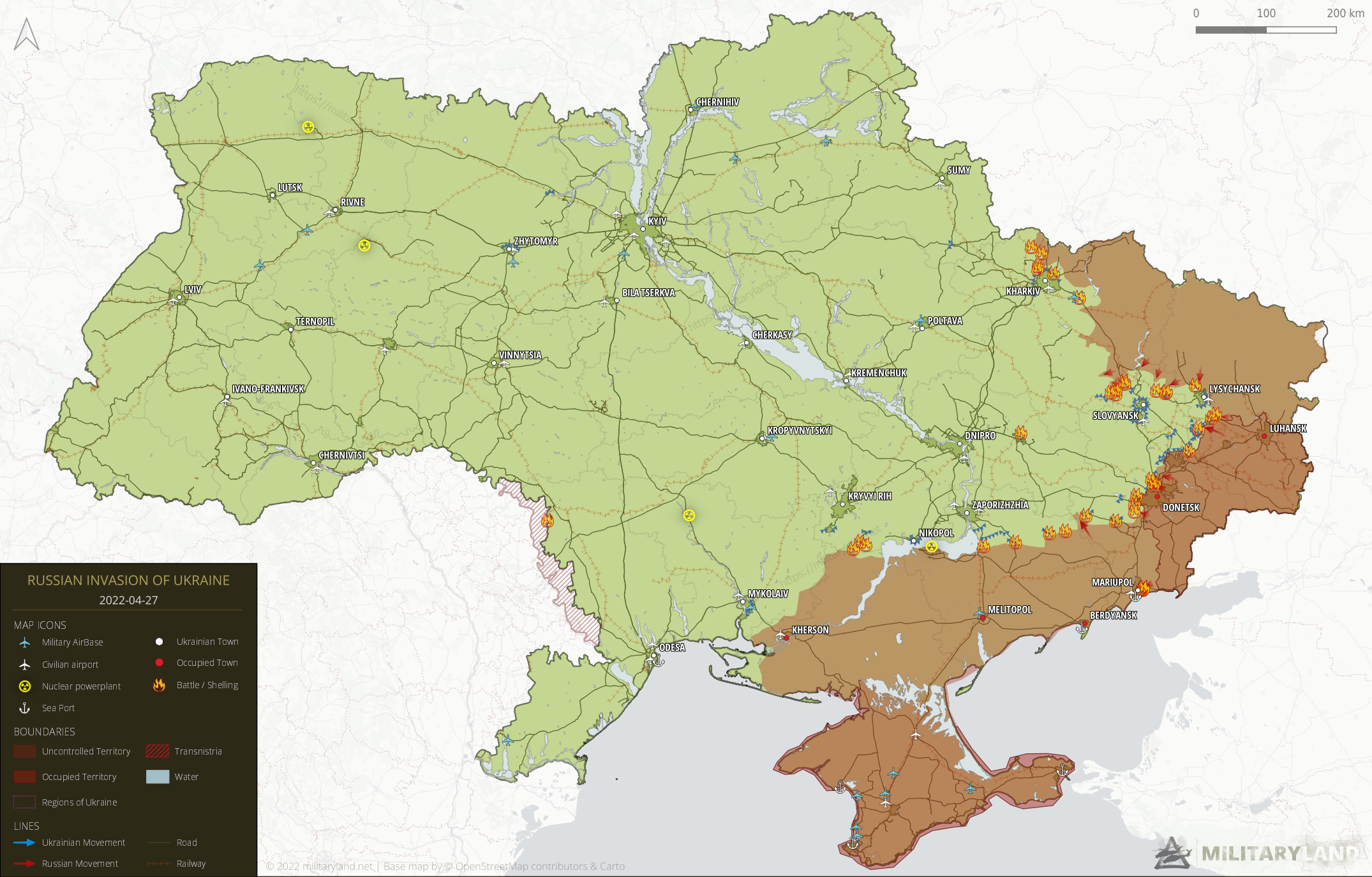 can all you Russian trolls go back to your cave, nobody cares about what Russia are doing, we just want to see Ukraine drain all your resources and stop your illegal invasion.

You should be. “To win a war you must know yourself and your enemy”. If you only focus on what Ukraine is doing you’re missing a vital part of the puzzle and may be misinformed.

Hello I read your updates every day but always have a hard time finding referenced areas on the maps because the map zooms to an area well below the location of the cursor.

There seems to be a problem with certain browsers. If a page refresh doesn’t work for you, I’m sorry, but cannot help you at this moment. You can always just click on the map and open the map in full resolution as before.

But Its difficult to see what is going to happen after 9 Mai, and Putin reaction
-Russia war declaration and full mobilization,
-Putin victory claim, whatever the situation is
-Nothing special, and long-term war as it is.
-Russia escalation on NATO, moldavia,…

Ukrainian defenders successfully repelled enemy attacks on Nyzhnie and Orikhove. But you forgot to mention that Ukrainian defenders failed to repel enemy attacks on Svetlichnoe, which lies more to the East from Nyzhnie and was lost to Russians after they also took Novotoshkivske, which lies east from Orikhove. This shows your reporting is one sided and focuses mostly on minor Ukrainian wins and all Russian losses including status quo situations, and only if unavoidable reports… Read more »

Whatever
Reply to  Whatever

No, actually, that part is incorrect. You did once. “Ukrainian forces reportedly attempted to push east from Udy, but they were unsuccessful.”. Considering all the failed pushes from the Ukrainian side, that’s a bit scarce.

And the main jist of that report was that Ukraine made it all the way to Udy, which was new information at the time, so the news of that assault was favoring Ukrainians.

I don’t mind informations in Ukrainians favor. As long as informations in Russian favor are listed in the same fashion. But of course since Jerome is Ukrainian it’s not in his interest to present the information in a balanced form.

NAZAR
Reply to  Whatever

Already received your +15 rubles? Name me at least one Russian or pro-Russian media that would show its defeats and victories as truthfully as you want from the pro-Ukrainian media. Can not? Exactly.

Hey buddy, great news, no one forces you to be on this site. If you don’t like it you can look somewhere else.
I might advise you this :

You will find many news that will fit your opinion on the subject.

Hi friend – on the Kherson front, it looks like RF took control of Oleksandrivka. The guy doing @Ukraine_map make a phone call with a local resident. He’s also showing that UKR army took over Kyselivka and Klapaya on the M14 highway, but I don’t know his source on that. Here’s his link.
https://twitter.com/ukraine_map/status/1519224954969022465

Russian sources published a video of destroyed Ukrainian positions on the outskirts, but no visuals from the village’s center.

re Kyselivka – Some Ukrainian sources claimed two days ago that Kyselivka was liberated, but Ukrainian HQ reported Russian presence in the village yesterday.

Correction, also: Russians haven’t been trying to breach anything inside the Azovstal Plant for nearly a week.

Your statement that they have been unsuccessful is not true.

Putin reportedly ordered the attack to stop to avoid wasting Russian manpower since the remaining Azov and Ukrainian troops are completely contained and basically out of food, medicine and ammo inside the tunnels.

My understanding is that the direct assault was cancelled. But shelling of Azovstal continues. Russian artillery is certainly working. Jerome – apparently – is referring to a video which appeared today with BMP3 and T72 using tank carousel

This is a losing game. No one with an inch of common sense thinks Ukraine stands any chance of stopping Russia from taking the entirety of Donbass, Luhansk and Southern Ukraine eventually.

A pointless slaughterhouse being incentivised by the US to weaken Russia by proxy, under the oh-so-noble- humanitarian cause.

like it or not, resisting is a choice of Ukraine, as long as it is willing to pay the price …. just as invading was a choice of Russia, of which it too will have to pay a price!

It’s not pointless, Ukraine has a though fight ahead but thanks to mobilization they managed to get the upper hand in manpower, new troops are reinforcing the front as days pass by, Russia on the other hand is getting weaker every day as they can’t fill in the losses, also the Russian military production is in a rough state, while Ukraine’s stockpile grows every day the Russian one gets slimmer and slimmer. It’s not even… Read more »

You live in some other world. Russian military-industrial plants are busier than ever. The sanctions do not affect the Russian defense industry in any way, the development cycle from conventional missiles and cruise missiles to fighter jets and ICBMs is in Russia. Now Roskosmos, instead of launching U.S. satellites into orbit, will fulfill orders for several dozen blocks of ICBMs.

Sounds like Trent is a Russia lover. Lots of us with miles of common sense think Ukraine can stop and reverse Russia. Just give them the arms to do so. And that is happening.

“It’s a losing game” and “Kyiv fell in 3 days”, we – in Ukraine heard this on February 24, but today is 64 days of this war, I read your comment and understand why Putin believes that Western countries are weak and it is only worth attacking. .. The Russian army is one of the most powerful armies in the world, and today is the 64th day of the war and this is Ukraine if… Read more »

Allow me to counter-argue his “losing game statement” by something a-bit-out-of-topic for metaphorization. In the movie The Lord of the Rings, during the siege of Minas Tirith, the King of Gondor (Denethor) frantically shouted to his men, “Abandon your posts ! Flee ! Flee for your lives !”. Luckily, Gandulf arrived in time and beat him down before he was doing more damage, then urged the Gondorish garrison to stand and fight against the Mordorish… Read more »

Hey, I sent you the Sky News video of Ukraine losing those villages north of Slovyansk, but you didn’t use in update of your map. Why not?

Can you please send it to me again? I cannot find it. Thanks

I checked it and I’m not sure. SkyNews indeed reported the loss of eg Oleksandrivka, but that’s in the conflict of what Ukrainian HQ says.