Russian troops advanced north in Zaporizhzhia Oblast and captured a small settlement. Things are getting serious in unrecognized Transnistria. Explosions rocked the village of Mayak and two radio antennas were destroyed as the result. Moldova have increased the level of combat readiness, unrecognized Transnistria have started to build checkpoints and barricades at important roads and cities. Russian soldiers stationed in Transnistria have been reportedly put on full combat alert.

A Russian cruise missile hit a bridge at Zatoka. It’s the only Ukrainian bridge connecting Budjak with the rest of Ukraine. According to available information, the bridge sustained a light damage and is functional.

Change: Pryazovia Frontline has been replaced by South-Eastern Front. 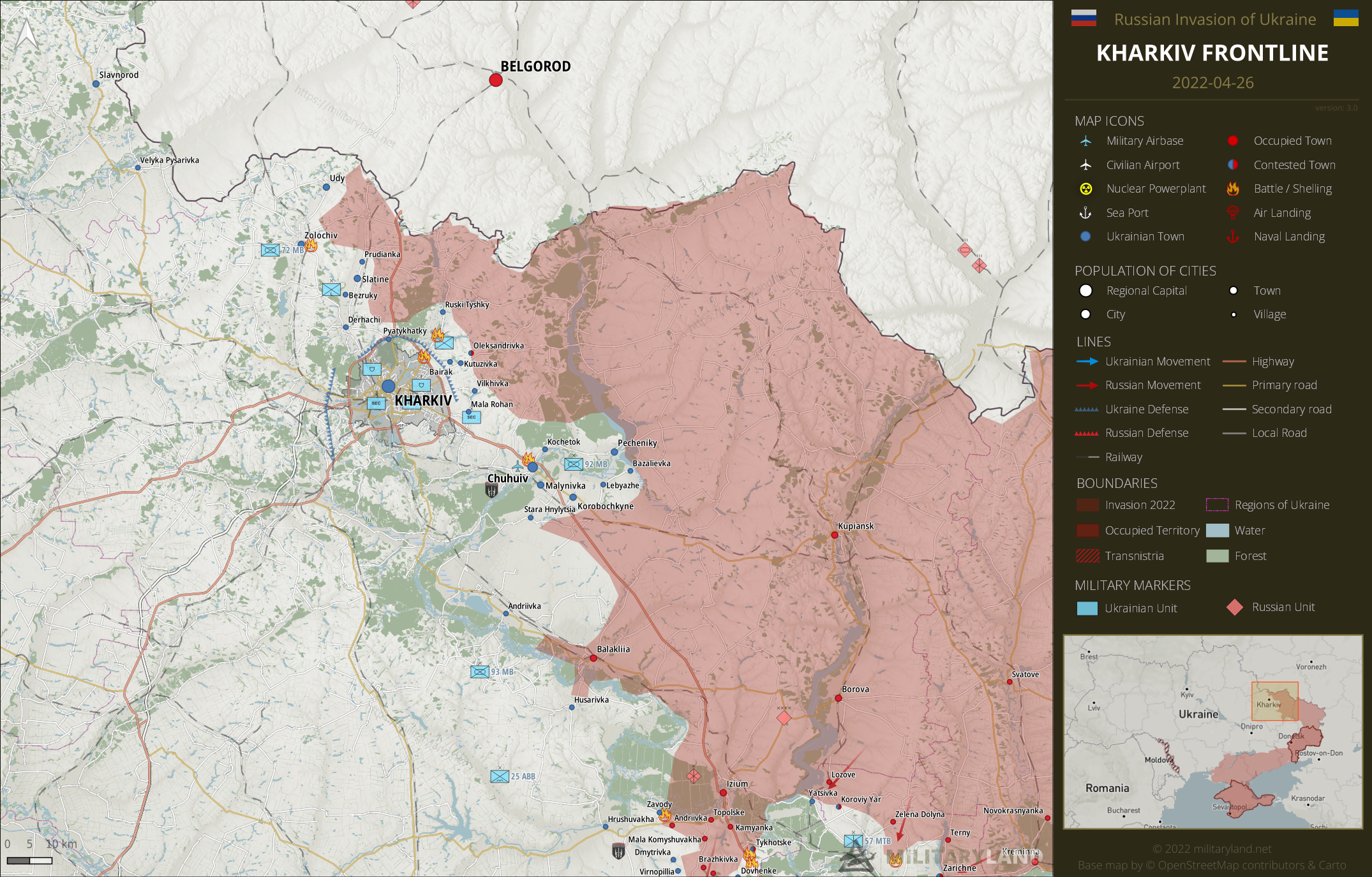 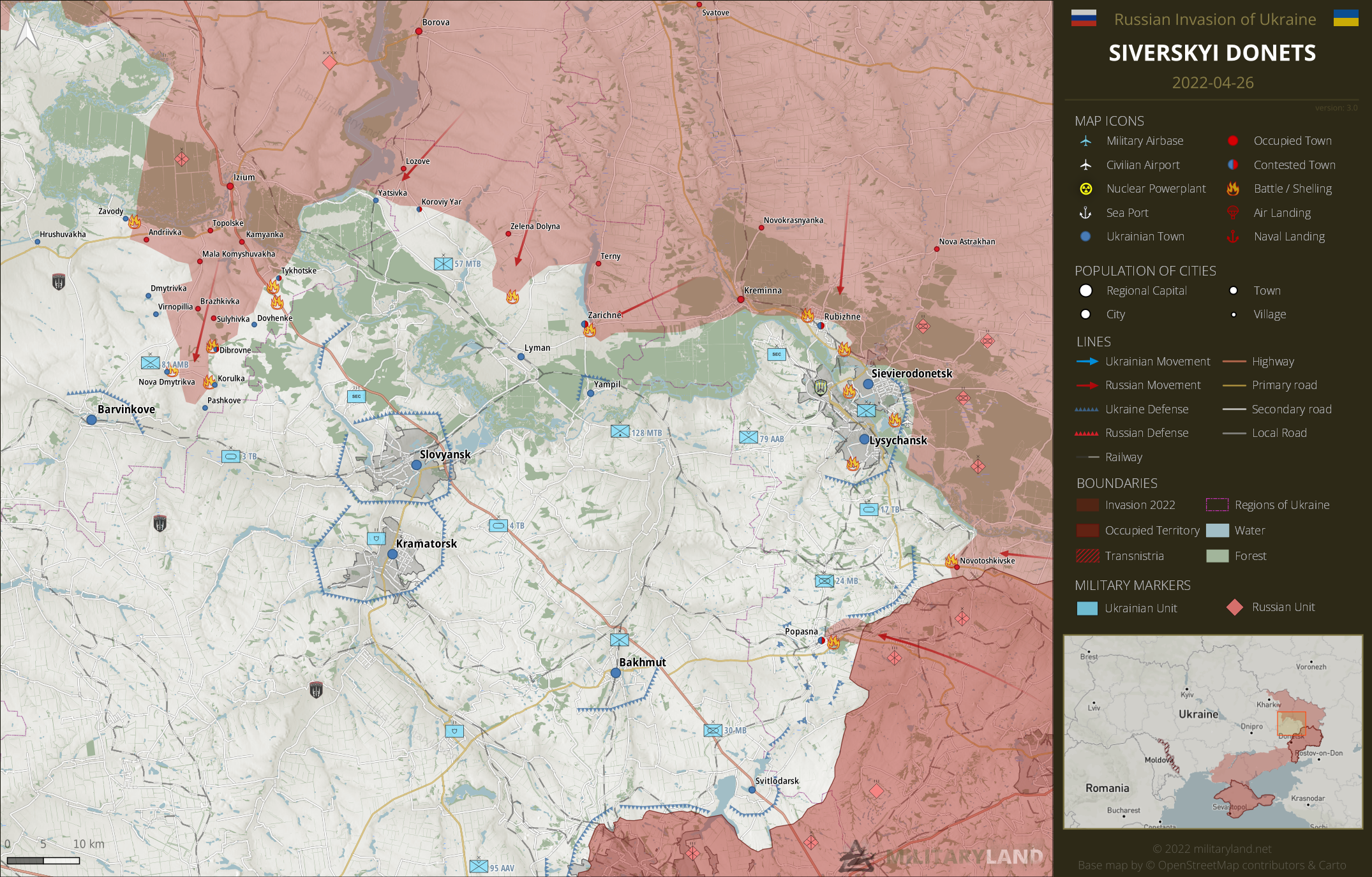 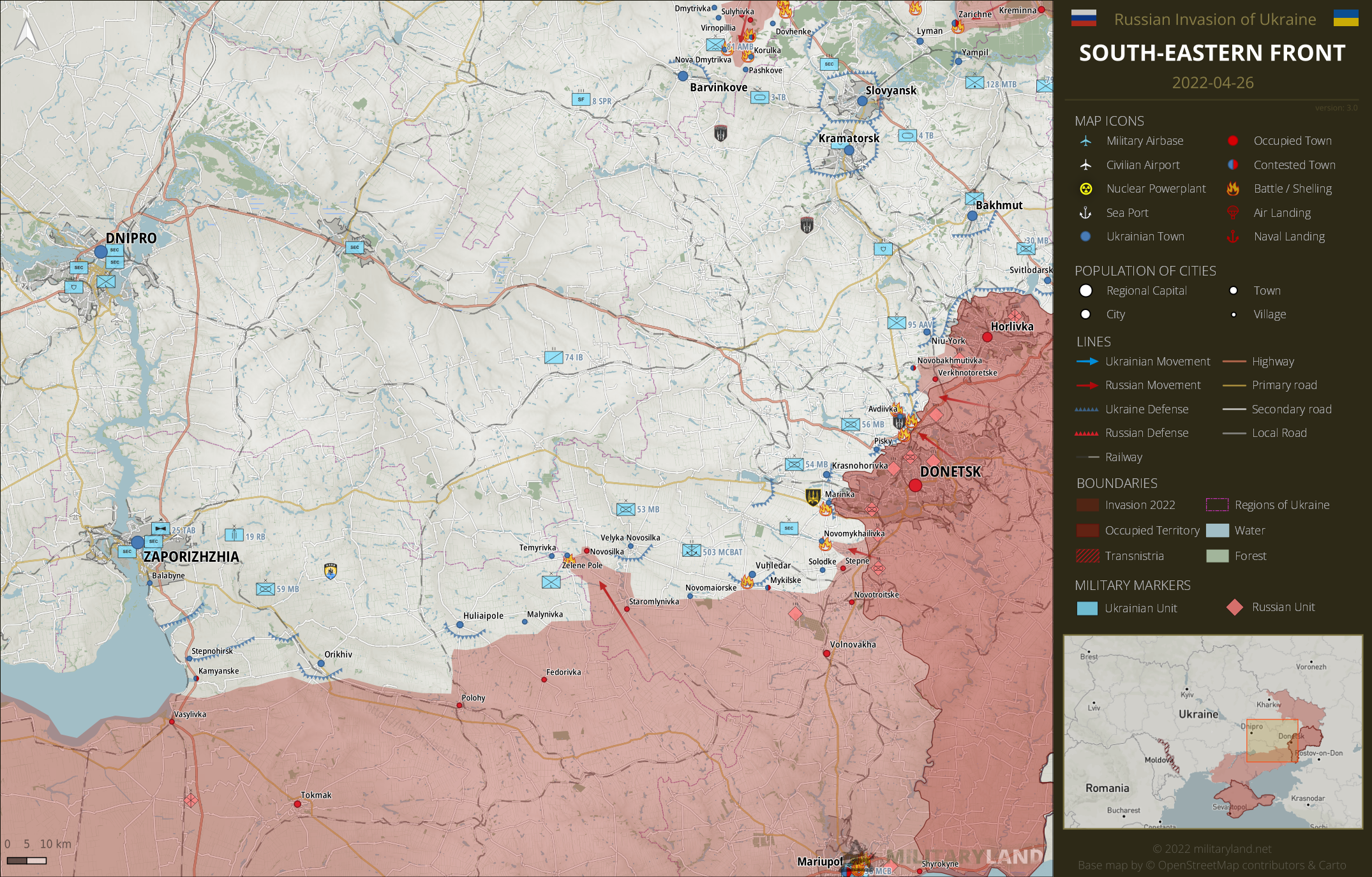 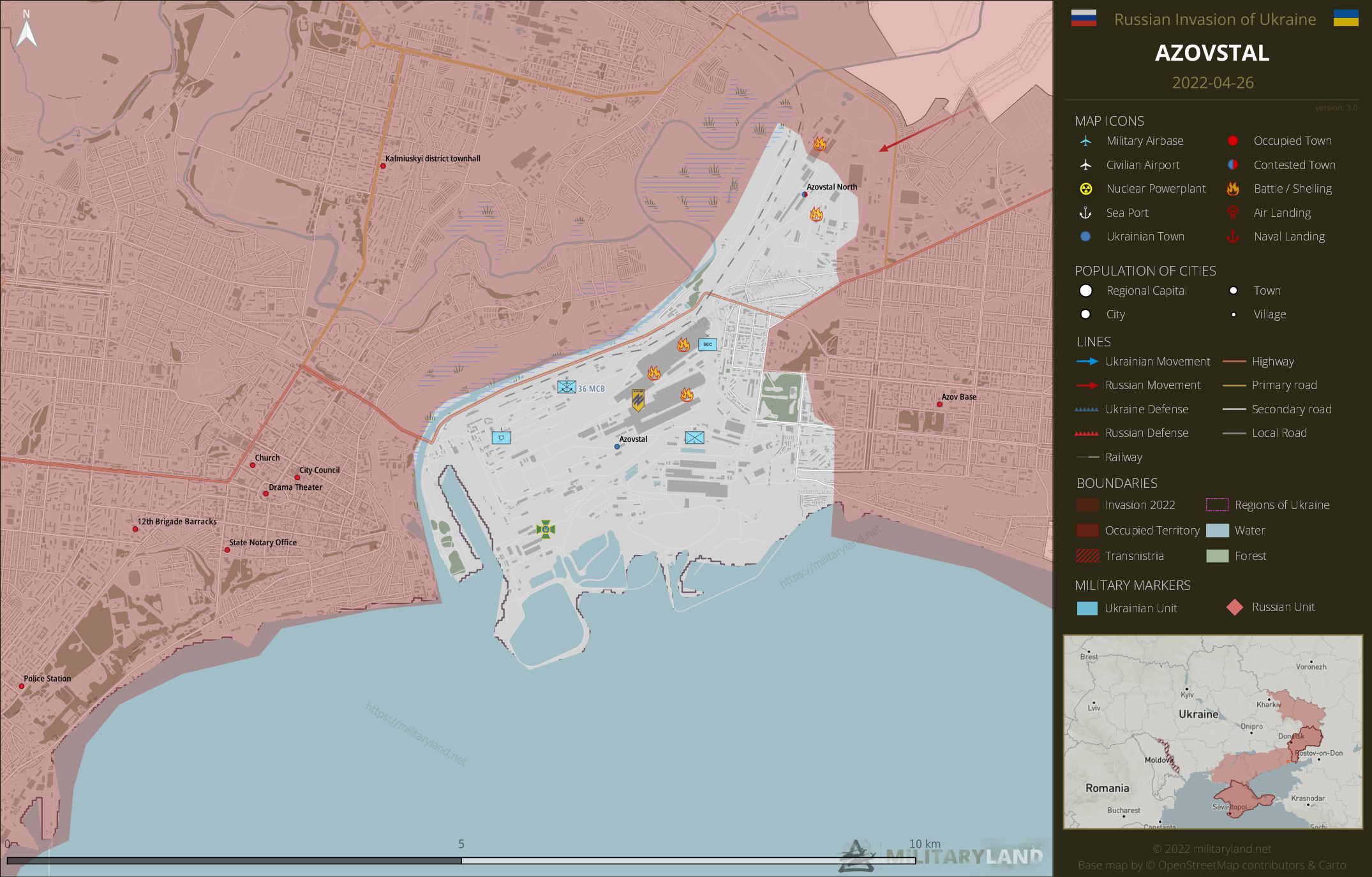 Shelling of Azovstal continues. Russian forces continue to push from the north in order to capture the northern part of Azovstal and nearby auxiliary warehouses. 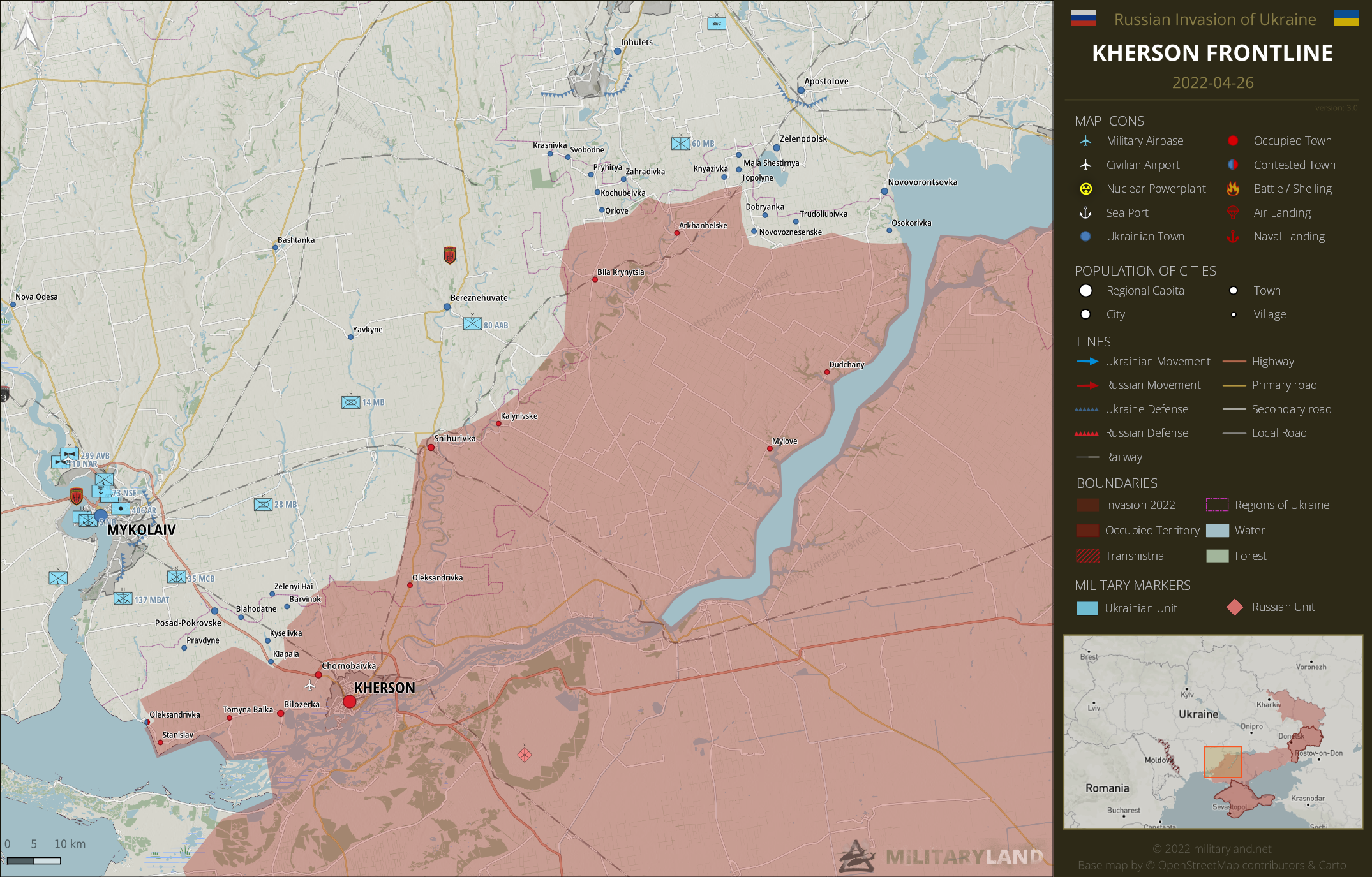 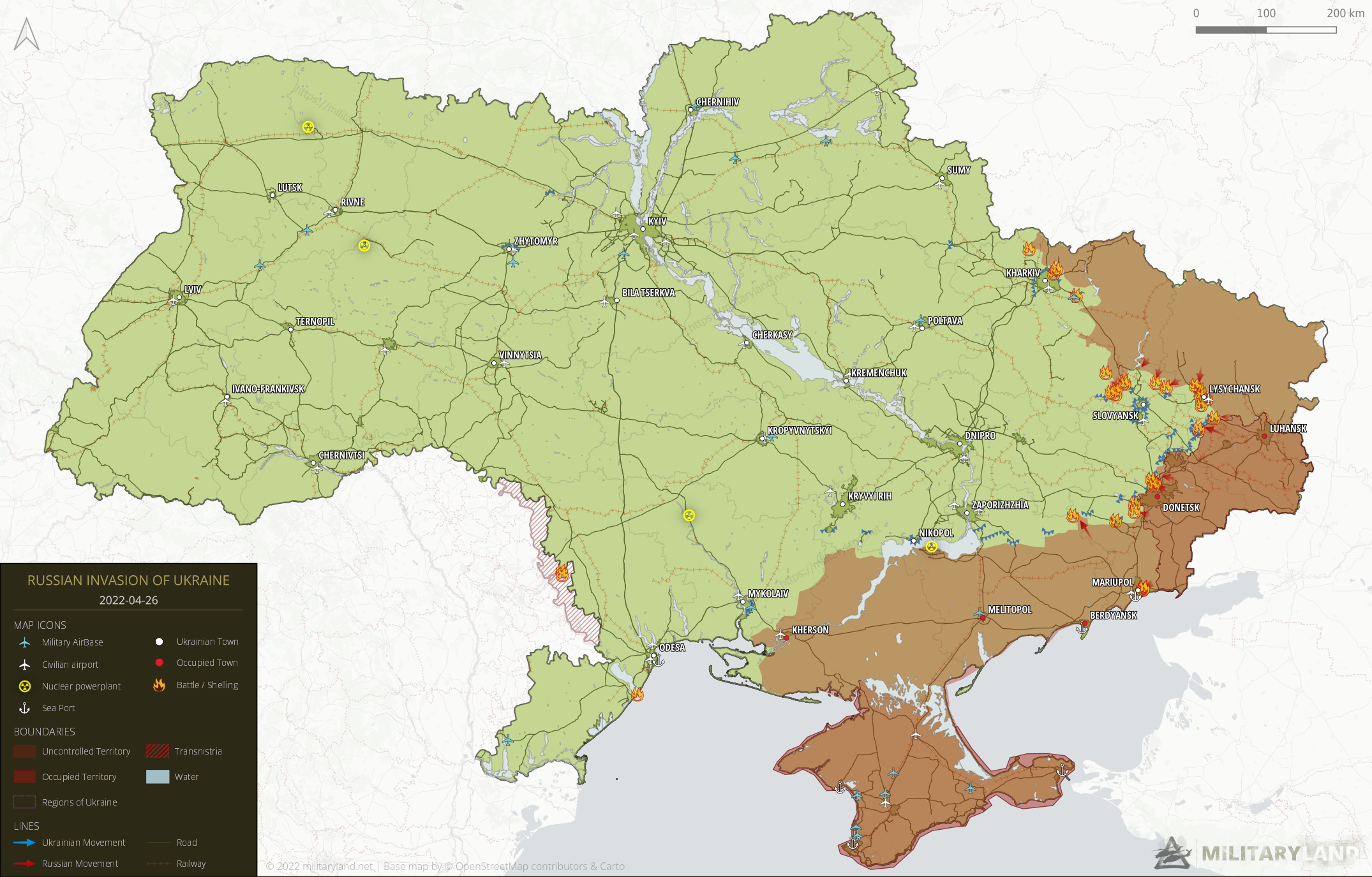 Our General Staff said that “filtration measures” were being carried out in Kiselivka. That is Kiselivka in Her. areas are not for us, not for Ukrainian troops.
Also, Oleksandrivka on the beach is not ours either.
There’s too much painted behind us.

report: “Operation ZThe Death Throes of an Imperial Delusion ” From: Jack Watling and Nick Reynolds, Royal United Services Institutefor Defence and Security Studies url: https://static.rusi.org/special-report-202204-operation-z-web.pdf It is too long to comment here, but I would like to share the first lines of the conclusion: “The initial euphoria at Ukraine’s withstanding the onslaught of the Russian Army has in some parts of Europe brought about a belief that Ukraine’s victory is now assured, or that… Read more »

Of course every one knows that Putin will not go home easly, but the first RU retreat from Kiev proved that RU “grande armée” can loose the war, and gave UKr a moral boost for victory. Now RU started a classical/Front war with strong forces. But, it is assumed now that UKr have more tanks than RU in the front now… due to reuse of lost RU tanks and west deliveries. Unless full war declaration/mobilisation… Read more »

Even that would take time. Ukraine took 2 months of mobilization and is only now starting to see added battalions in action. Plus Russia has to refit their old tanks while Ukraine gets working stuff from abroad. This really became a nightmare for Russia ever since Belarus didn’t help from the north and cut off the western aid supplies.

You’re assuming the Russians withdrew from Kiev because they were losing. The other side of the argument which is equally plausible is that it was an intentional move to distract a large portion of the Ukrainian army from sending reinforcements in Mariupol. You have to agree that on that precise situation the priority would have been to set up defense perimeters around Kiev and not let Kiev fall. This allowed the Russians to encircle Mariupol… Read more »

Nah it’s pretty obvious the Russians wanted to take Kiev so that the Ukrainian army would be pretty much decapitated given the government wouldn’t have time to relocate and be captured by Russians, making the war end pretty quickly, but they failed that. If they just wanted to divert troops they wouldn’t commit 30k troops, also because Ukraine has much more manpower than Russia due to the mobilization and manpower is much more important to… Read more »

Those explanations were nothing but and attempt to save face and cover up the failure maybe most outside Russia don’t buy it but they also have a domestic audience they have to cater to which they need to lul with propaganda to justify the heavy losses and invasion. A distraction with the effort of resources and manpower put into the Kiev offensive wasted does not make sense. Everything points to a bungled attempt either at… Read more »

Cheerful conclusions. To sum up:
– Europeans will freeze
– businesses will be harmed and jobs lost
– there will be risk of _further escalation_ (!) regardless of whether Russia wins or losses (!!!)
Let’s hope that European idiots, I am sorry, politicians, will be able to mitigate these issues and will come on top of things!

also this: “Shelling on the railway bridge in #Zatoka, #Odessa region. It is reported that it was on this bridge that fuel was delivered from #Moldova to #Ukraine.”
source: https://twitter.com/podrazdelenie/status/1518947324583628800

There are about 1500-1600 Russian soldiers in Transnistria guarding the Cobasna ammunition depot. And another group of 500 soldiers for “peacekeeping”.

– I just read a very interesting article with the same statements. source: https://www.rferl.org/a/russia-ukraine-war-moldova-transdniester/31823947.html Also one interesting thing to mention from the article: “Cobasna ammunition depot is the largest¹ in Europe”. but I guess those munitions are old, so not necessarily all longer operational or safe to use… one can say the strela sent by the germans to Ukraine as an example… _____ ¹ On wikipedia ( https://en.wikipedia.org/wiki/Cobasna ) it is said that is the… Read more »

(I posted an answer I don’t see it, so I answer again, my first answer may appear later ?) I just read a very interesting article with the same statements: https://www.rferl.org/a/russia-ukraine-war-moldova-transdniester/31823947.html on thing from the article, I’d like to mention: “Europe’s largest ammunition depot at Cobasna” on wikipedia, https://en.wikipedia.org/wiki/Cobasna_ammunition_depot, it is said: “the largest ammunition depot in Eastern Europe” the ammunition are certainly old and some may not be anymore operational. Like the strela sent… Read more »

Apparently, your maps (and I myself also) have been wrong as concerned Russian control west of Snihurivka. Since today, however, the map may be correct.

I think that Southern front is very fluid. It’s wide open farmland so there aren’t really defensive points to capture as much as it is a slugfest. UA is being cautious and progressing slowly, using attrition to their advantage. It will crack loose one of these days.

Snihurivka is a key point of North Kherson (rail/road). Loosing that for RU, will mean that they will have to retreat to Kherson city. Hope UKr willbe able to acheive that

I read that UA is attacking Snihurivka from the west and the north. Fingers crossed they kick them out of there. I “think” that’s where the RU artillery is that’s been hitting Mykolaiv.

There were reports of Ukrainian troops at the edge of Snihurivka at least a week ago. Ukrainian forces either lost them recently (again) and have recaptured them now, or it’s another “online” offensive and Ukrainians were in the villages for some time.

According to Twitter, the Russians have counter-attacked at Klapaya (Klapaia), and have retaken or are contesting it.

Excellent update! Keep up the great work on refining the product – the weather indicator is an excellent addition.

Whats your guys opinion on the push near Izium? Where are they trying to meet with the southern troops?

Southern troup ? They are very far away.

Russia is trying to cut off the railway to Slovyansk near Barvinkove. This will cut off the supply of reinforcements and military supplies to the eastern fronts.