Russian missiles hit Ukrainian railway infrastructure across the whole country in order to disrupt the weapon flow to eastern Ukraine. An oil facility and nearby military base with oil reserves in Russian Bryansk caught fire today. The cause remains unclear at this moment, but locals reportedly heard several explosions. 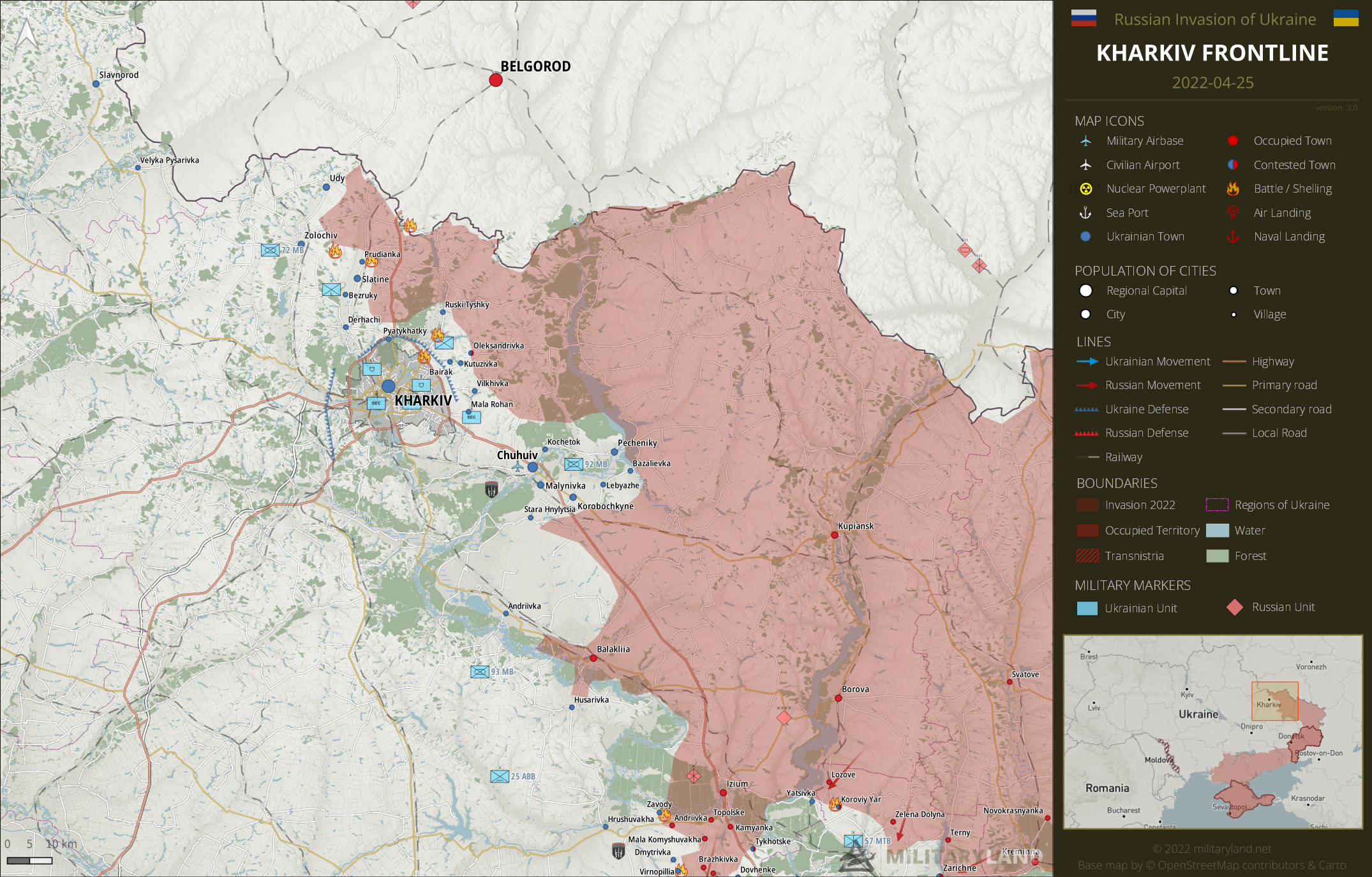 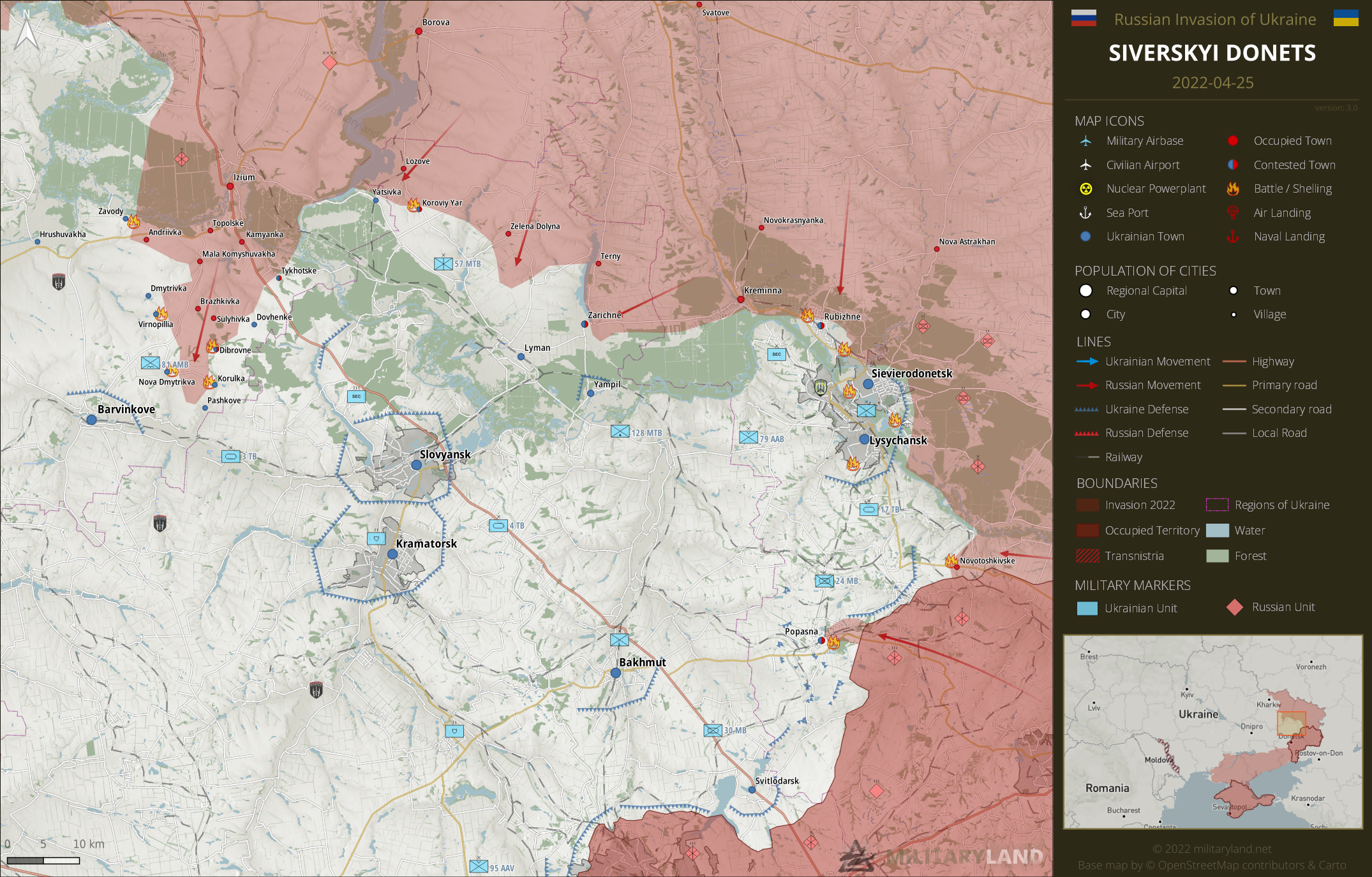 Russian forces attacked Ukrainian positions at Koroviy Yar, but the assault was repelled. The fighting continues in Zarichne and the surrounding area. The enemy captured Novotoshkivske in Luhansk Oblast. The town was razed to the ground. 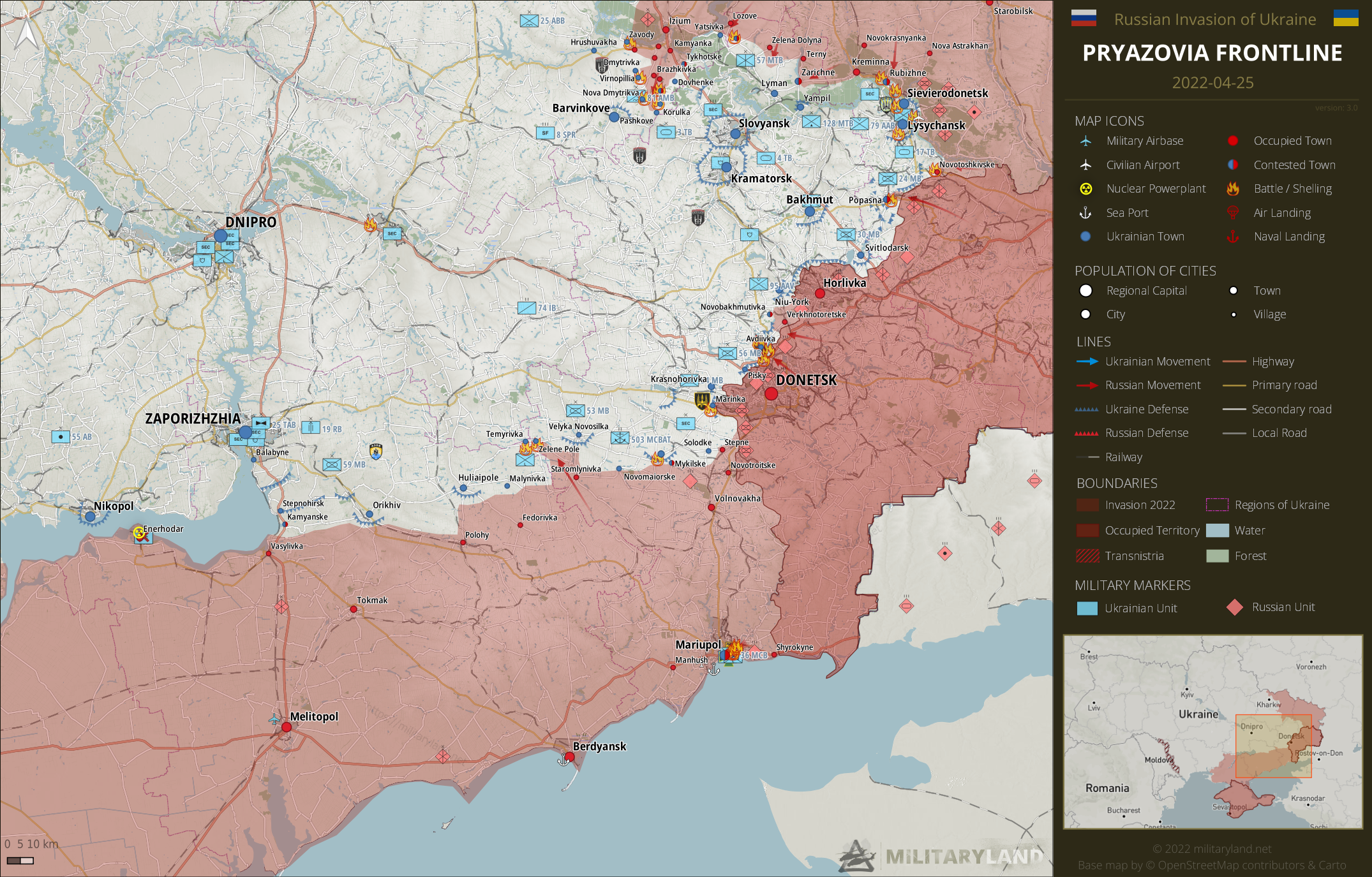 Russian forces have no success to break through Ukrainian defense lines near Marinka and Avdiivka. All today’s attack were repulsed.

Fighting have continued in the vicinity of Zelene Pole. 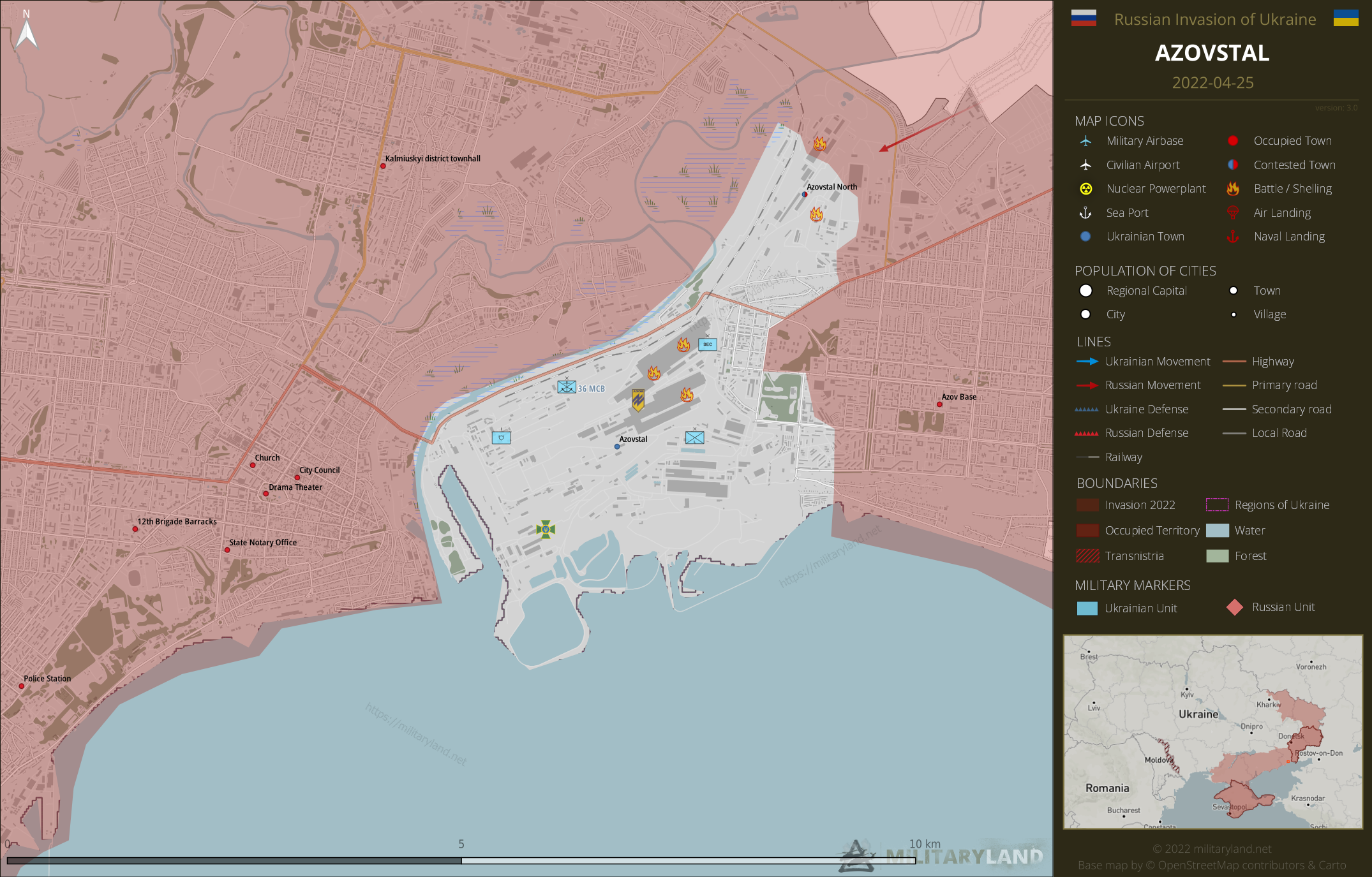 Russian troops continue to advance from the north and east. The recently released footage from Mariupol indicates that Ukrainian defenders are still present in some residential areas bordering with Azovstal. 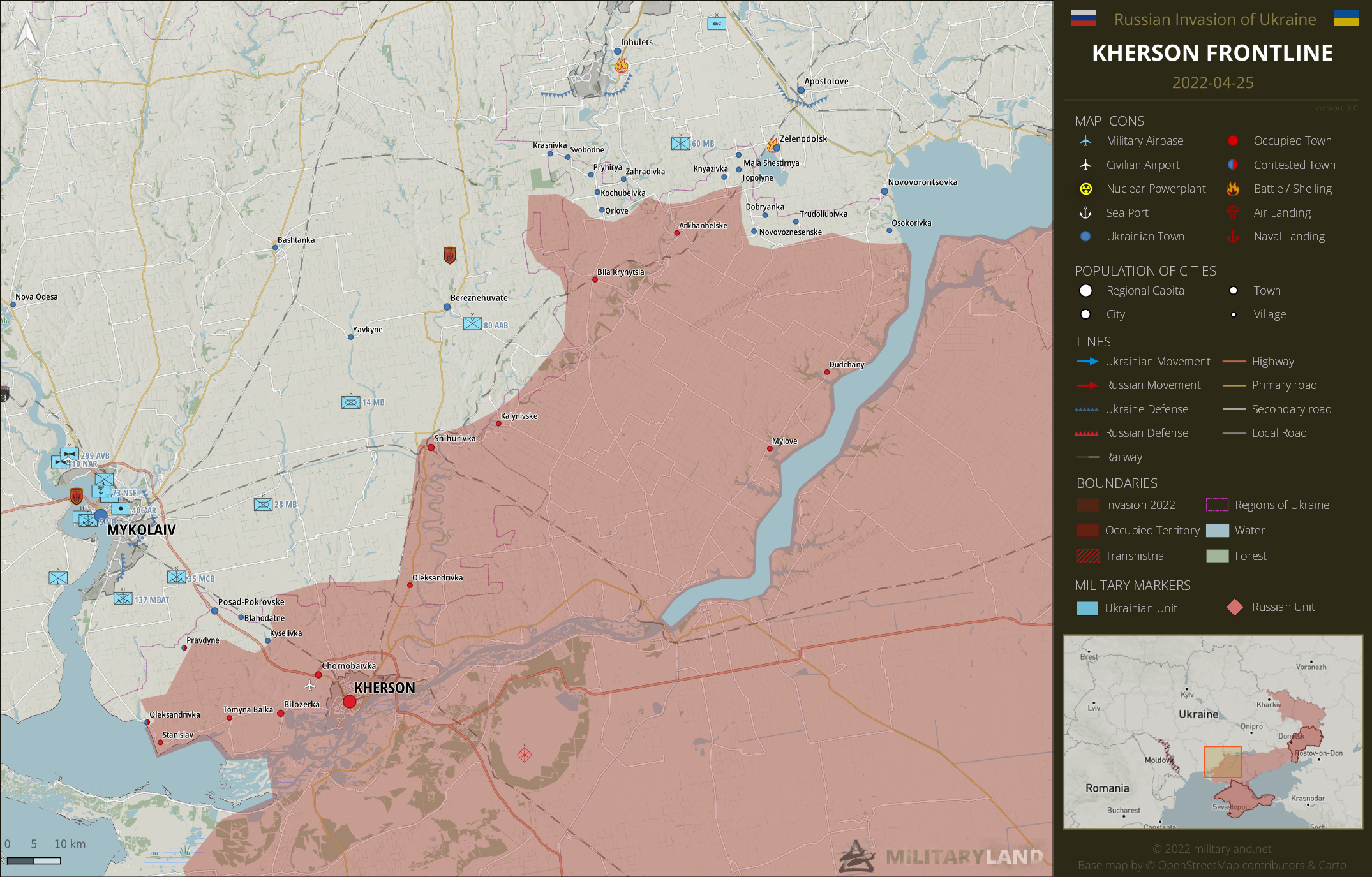 The enemy is reportedly amassing tanks and troops in the north and will try to push towards Kryvyi Rih in coming days.

Ukrainian Army reportedly liberated several settlements in Kherson Oblast, Kyselivka is one of them. We need to wait for confirmation for the rest. 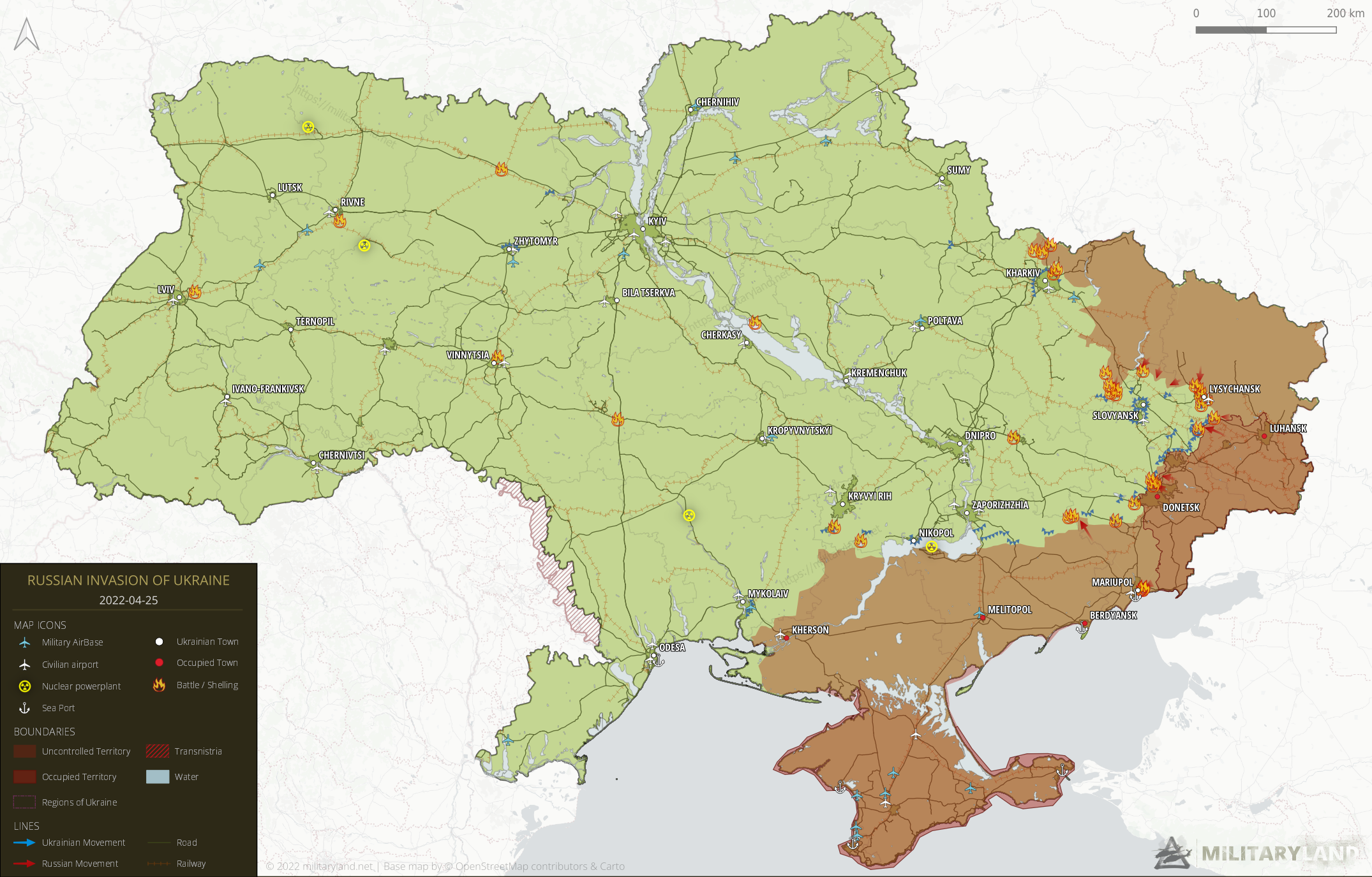 This is speculation on my armchair part and I really don’t know the real situation on ground or numbers deployed, but I think the mobilization and push towards Kryvyi Rih together with so called mobilization of forces in Transnistria is nothing more than a maskirovka diversion similiar to the Black sea navy landning ship movements to tie down UKR forces and prevent them getting deployed east. I read somewhere in Ukrainian newspapers forces in Transnistria… Read more »

The more areas Russia gets involved in the bigger their losses and the sooner they have to pull out. Simple as that.

Hey. I know you don’t get alot of emails here saying “thank you” — But I want to say thanks. I write a Daily SITREP on the war for my Facebook audience, and I rely on your maps. You have the best maps of the war, anywhere. And believe me, I look at many many mappers.

And I thank you for taking your time to post a thanks comment here. I appreciate it.

fullmap jpg is named day 63 instead of day 61.
nice work as always, thank you for the operative output from Estonia.

Just a wrong name, all data are correct. 😉 Thanks for the appreciation, glad you like it.