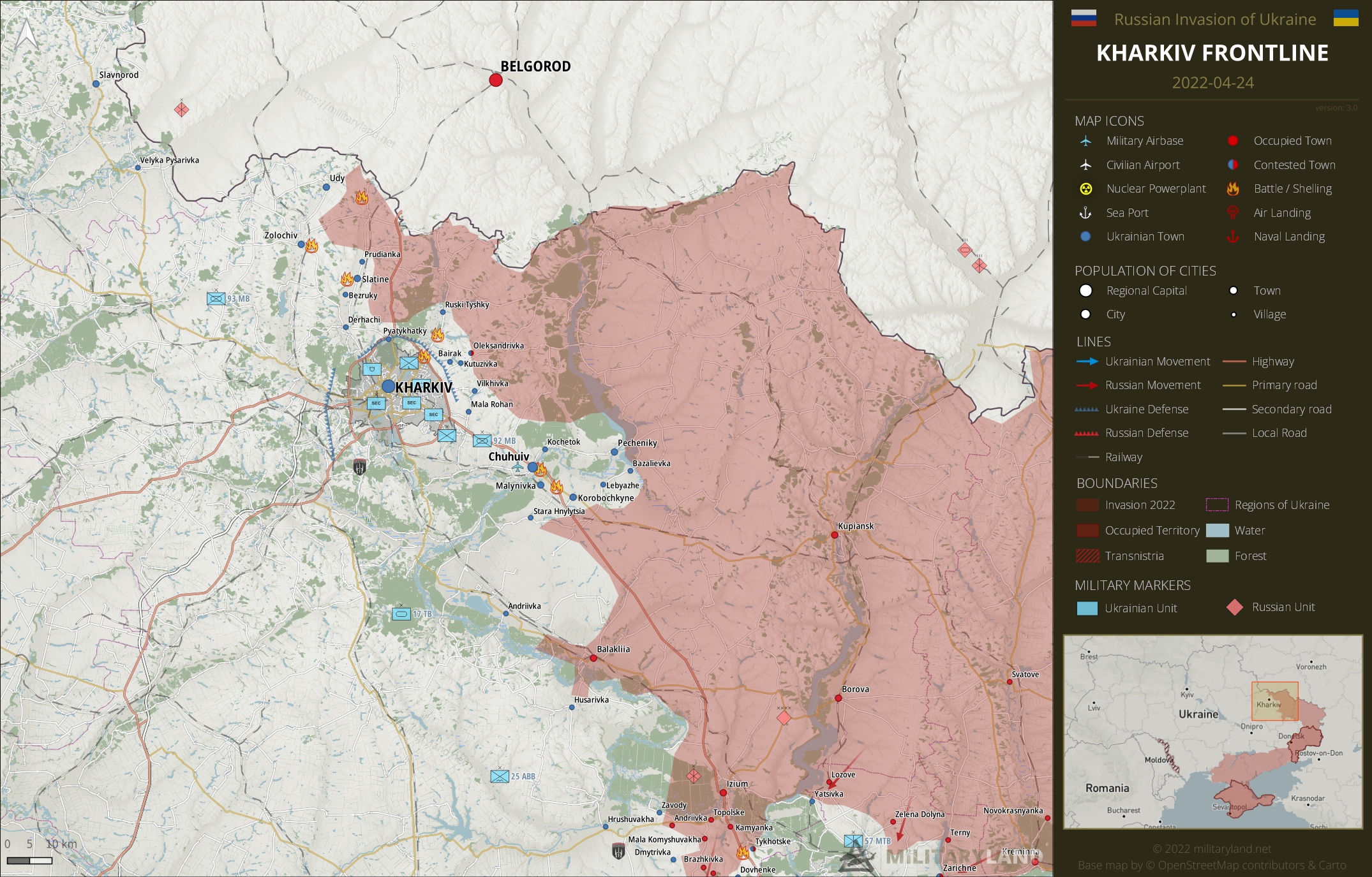 Ukrainian forces reportedly attempted to push east from Udy, but they were unsuccessful. 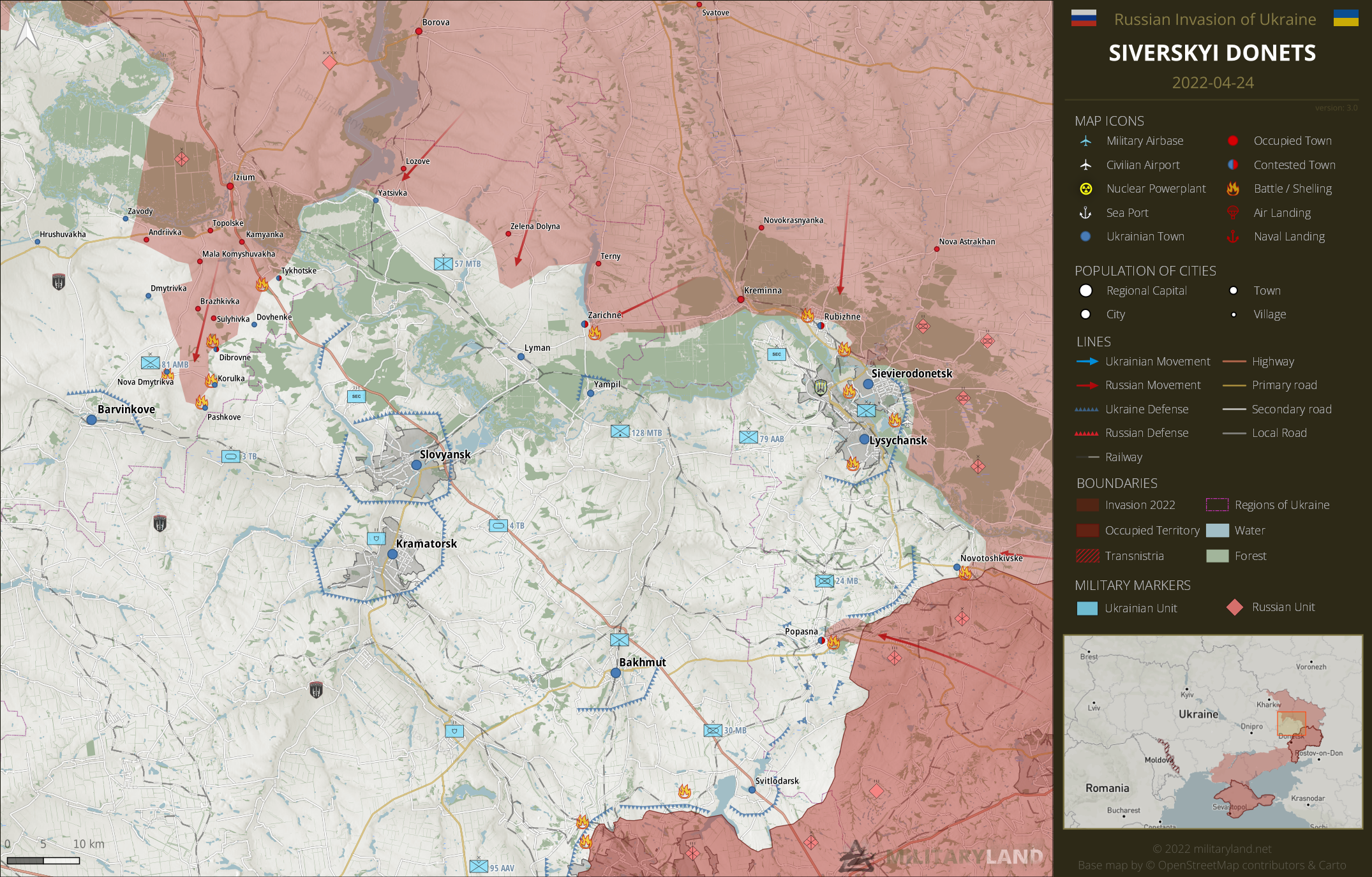 Russian reconnaissance element bypassed Dibrovne and pushed south. Ukrainian forces were able to stop the enemy movement near Pashkove. Russian troops have found a hole in Ukrainian defensive lines and are now threatening to cut the railway between Barvinkove and Slovyansk.

Russian forces have reached Yatsivka and entered the outskirts of Zarichne. The enemy also pushed south of Zelena Dolyna towards Lyman, but was stopped before reaching the town. The enemy has reportedly built a pontoon bridge near Kreminna. 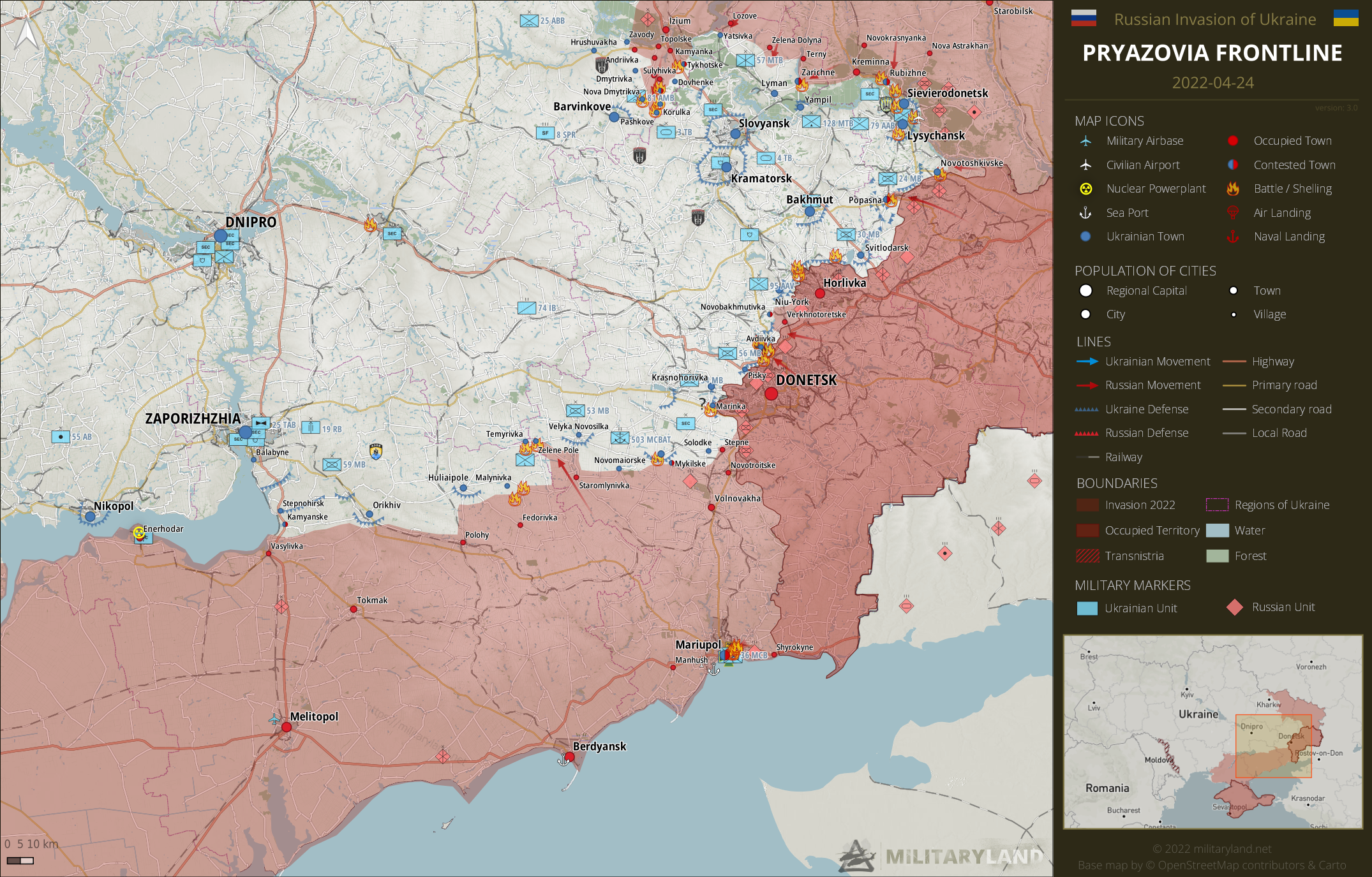 Russian forces attempted to advance near Stepne, but the assault was repelled.

The situation remains complicated in the vicinity of Zelene Pole and Malynivka. 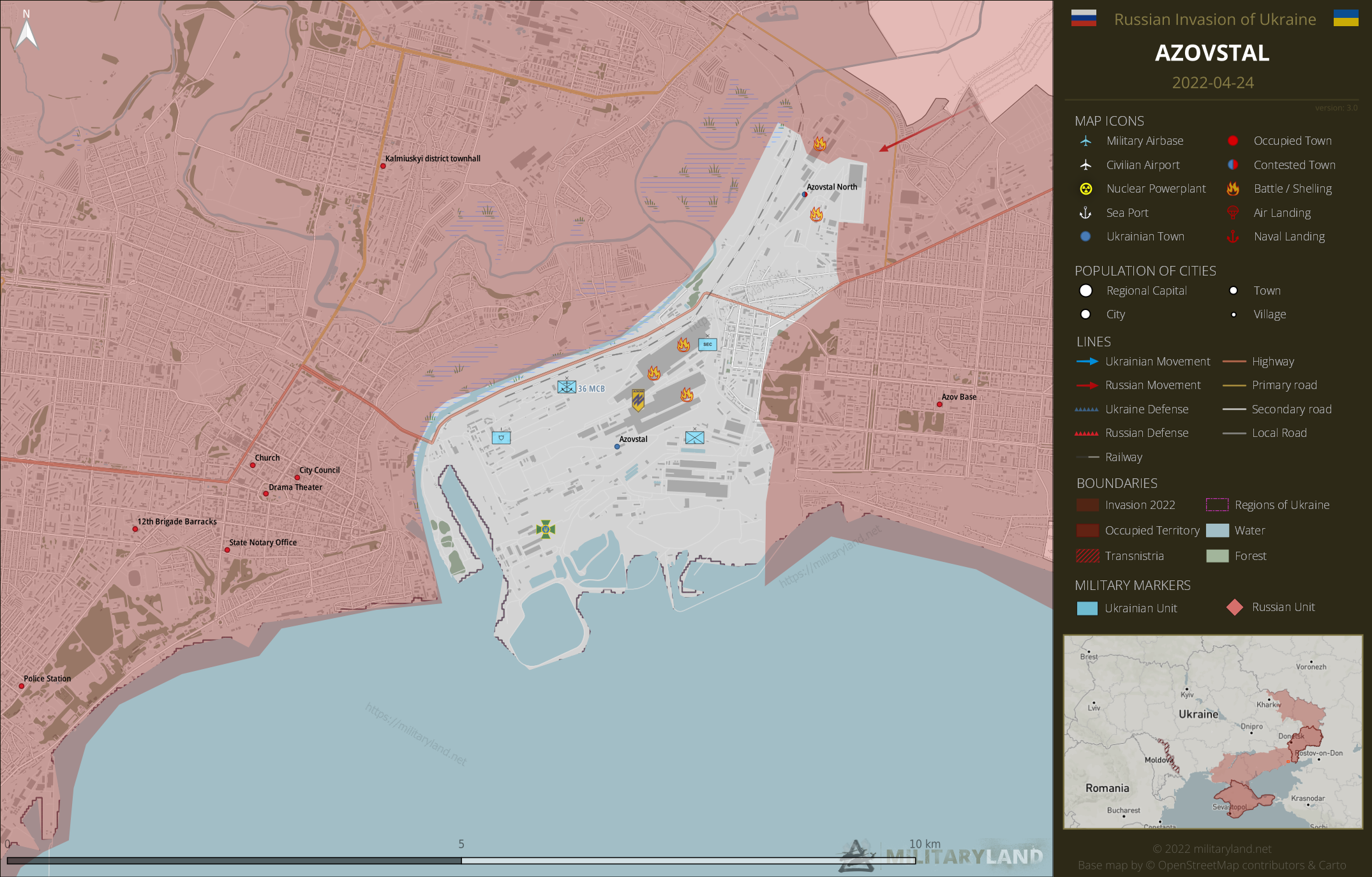 Russian troops have captured several warehouses and buildings in the northern part of the plant. 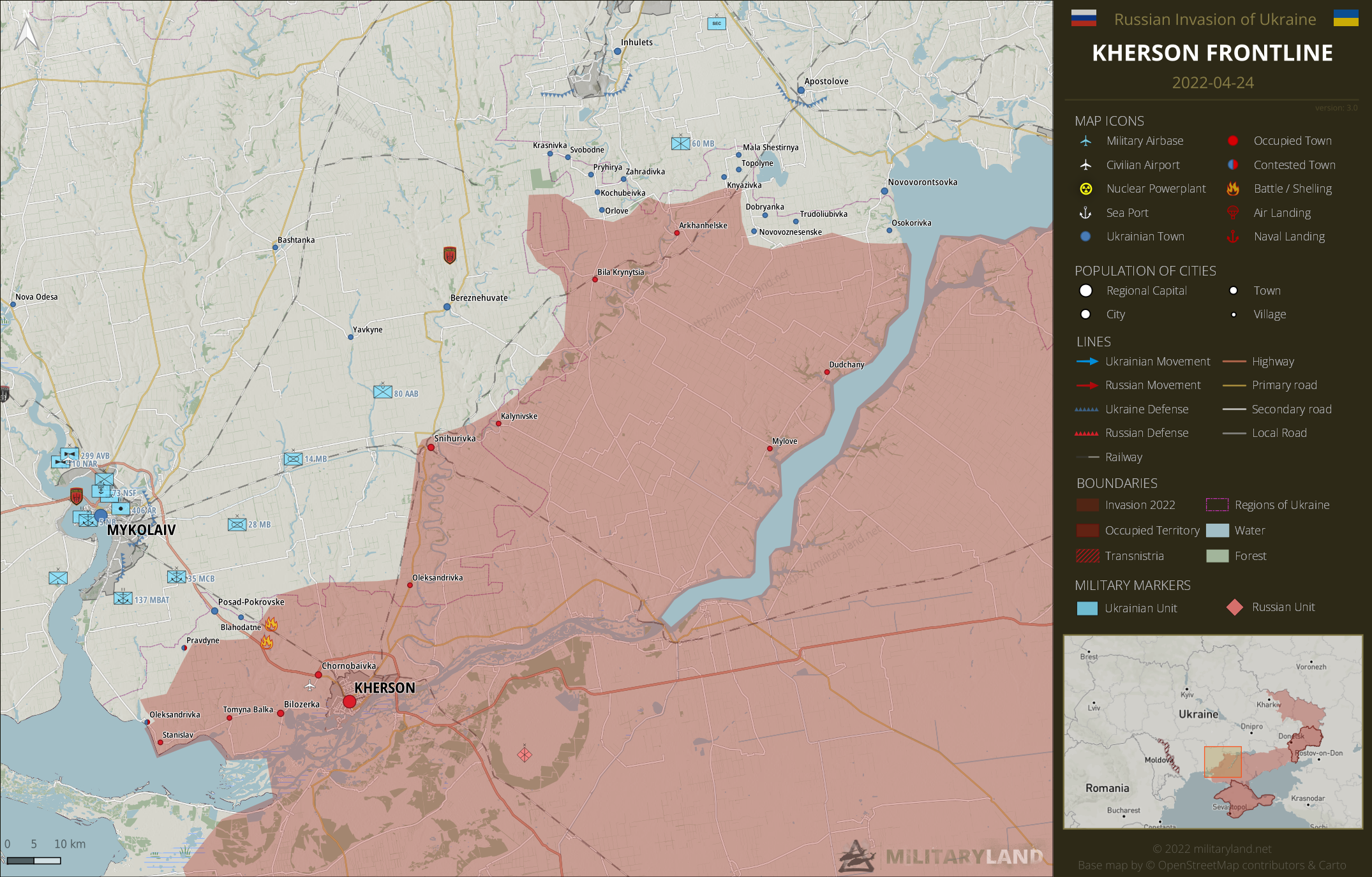 Russian army amassed its forces in the northern part of Kherson Oblast. Ukrainian officials expect an offensive operation towards Kryvyi Rih in the upcoming days. 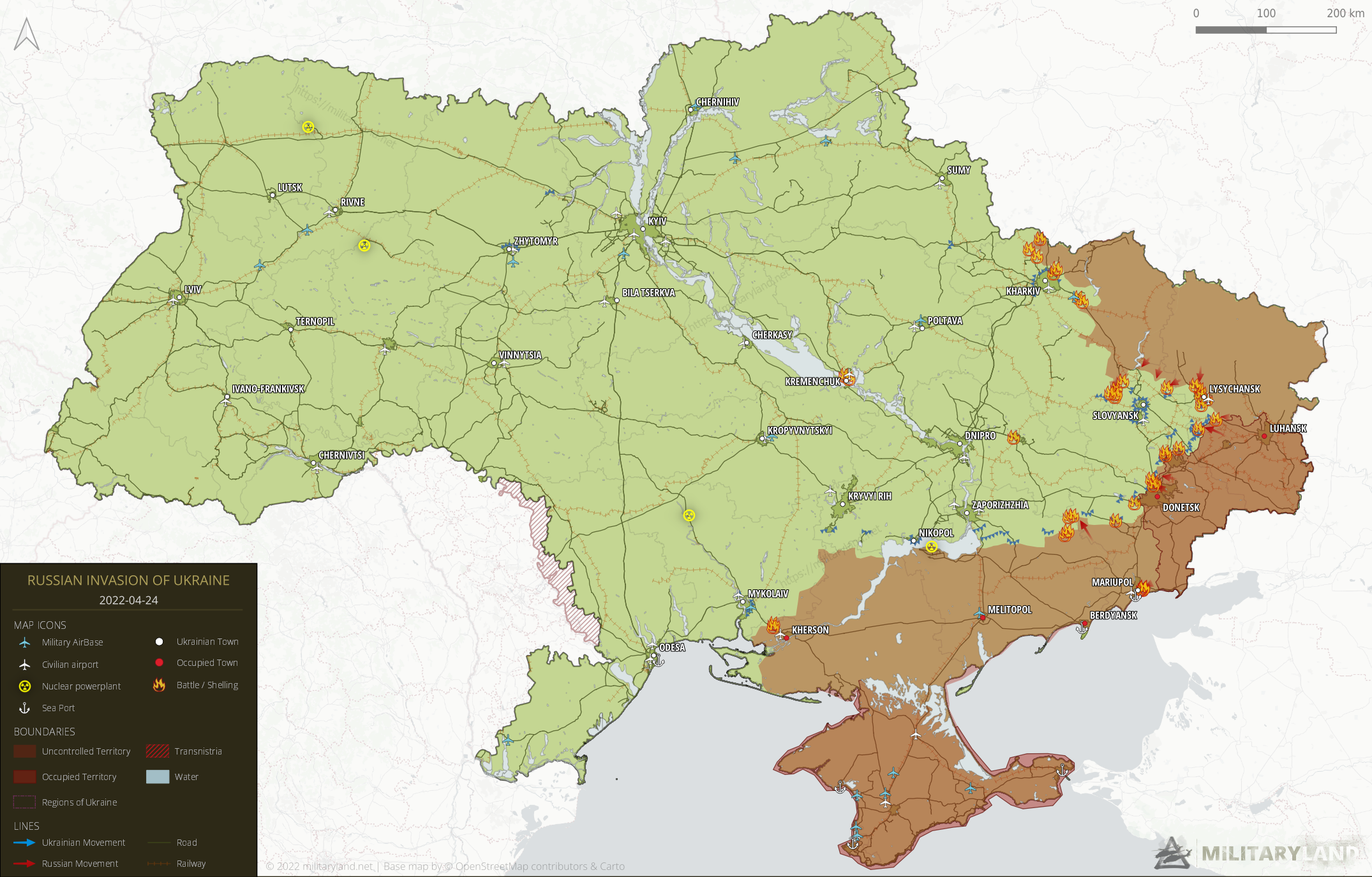 There was nothing to capture there. Russian troops took the scorched earth of Novotoshkovsky
After a long period of destruction by air strikes, the racists occupied Novotoshkivske, which is part of the Mountain VCA. Fighting continues for other settlements of the community, the tactics of the enemy and itself – all “level with the ground.” Sergey Gaidai Head of Luhansk Regional State Administration.

I believe the Russian push to Krivoy Rog may fizzle out before it starts because of the pressure to supply route that these new Ukrainian gains pose. In my opinion there are two important opportunities for the Ukrainians – to cut the supply north of Izium and north of Kherson. Also is there any way they can strike the bridge to Crimea from Russian land?

I agree. Russians try to push too forward and there is chance to cut off them.

Yep, cut those two tentacles off and it’ll be asy peasy. I heard Ukrainian special forces already blew up some railways near Crimea?

The battle will be won on supply lines, whichever side establishes robust supply lines and disrupts enemy supplies will win. So far it’s the Russian side that have been dominant in this regard due to their overwhelming power and air superiority. Ukrainian forces have been effective in going behind enemy lines and taking out supply convoys here and there with their sabboteur groups but the air superiority remainst crucial. Holding onto villages and territory is… Read more »

Not only supply lines, but also with what to supply. If West, espessially US will supply UA with large quantities it’s the end for RU. It only a question of time.

According to a message from the Ukrainian telegram https://t.me/UkrzalInfo/2162, part of the railway’s electrical networks were disabled.
Further strikes will lead to the collapse of the transport railroad supply of Ukraine.

Not very trustful source. He likes to exaggerate a lot, and it was proven many times he spread wrong information.

“Russian army amassed its forces in the northern part of Kherson Oblast. ”

Now would be a perfect moment to strike from Mykolaiv into the Kherson and Nova Kakhovka and cut them out of logistic behind Dnipro River… I really hope that new Ukrainian units will be ready to strike soon!

https://www.ukrinform.net/rubric-ato/3465926-ukraine-regains-control-of-eight-settlements-in-kherson-region.html “”Our units have regained control over eight settlements in Kherson region from the positions of observation posts,” the statement said. Ukrainian units in the area of Kyselivka, opened fire on enemy forces that had been preparing for the offensive. The Russians suffered heavy losses and retreated toward Chornobaivka.” From that statement it is safe to assume that Kyselivka has changed hands back to the Ukrainian side. The other seven villages remain unnamed (I suppose… Read more »

Ukraine has been very secretive about the Kherson gains… they claimed to take villages weeks ago but didn’t mention their names. I wish I knew what is going on there…

The units north of Kherson have mostly been from the 126th Coastal Defense Brigade in Crimea. Ukraine has lately reported that brigade has taken huge losses and I doubt they have the ability to keep pushing further. Russians need more reinforcements.

“The enemy has reportedly built a pontoon bridge near Kreminna.” situation for UA forces seems complicated there, as one can see in the video: https://twitter.com/DefMon3/status/1518268854635581440?ref_src=twsrc%5Etfw “Russian army amassed its forces in the northern part of Kherson Oblast.” I saw this tweet today from a Canadian volunter: “Our forces have regained control over 8 settlements in #Kherson region. #Russian concentration of manpower and equipment in the area of ​​#Kiselivka for an upcoming attack on #Posad-Pokrovske was… Read more »